Accessibility links
For People With Developmental Disabilities, Food Work Means More Self Reliance : The Salt Finding a job and building a life of their own can be a monumental challenge for people with developmental disabilities. But food work can be a good fit for many of them. 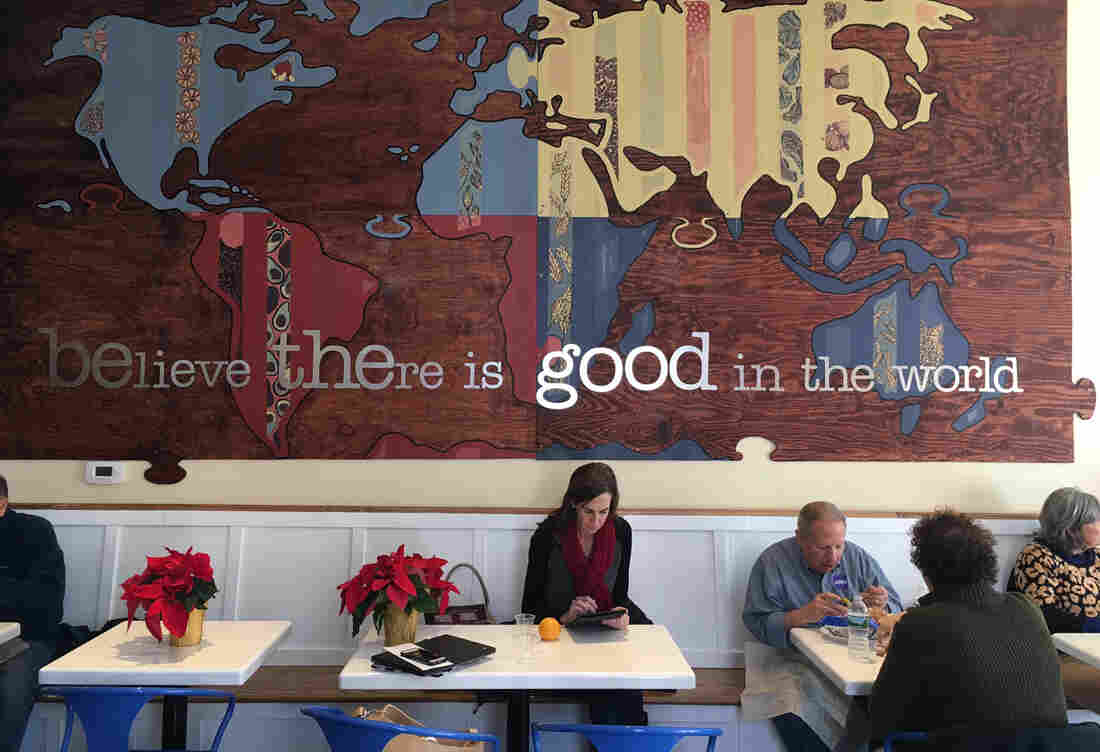 Customers at Puzzles Bakery & Café in Schenectady, N.Y. More than half the staff at the café has a developmental disability. Rhitu Chatterjee/NPR hide caption 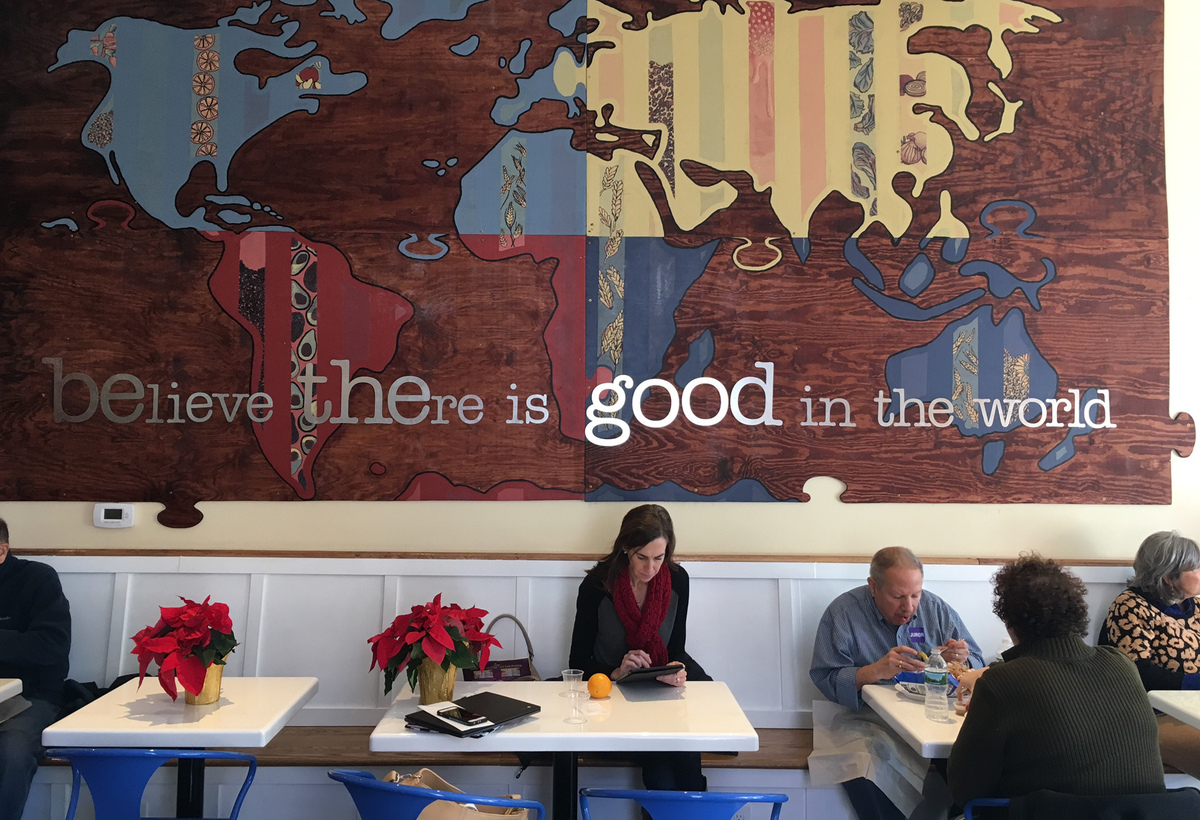 Customers at Puzzles Bakery & Café in Schenectady, N.Y. More than half the staff at the café has a developmental disability.

Every child wants to grow up to be independent — to leave their parents' home, find work, build a life of their own.

But that seemingly simple step into adulthood can be a monumental challenge for children with developmental disabilities like autism spectrum disorder, cerebral palsy, or any of a range of other such disabilities that affect about one in six American children, according to the U.S. Center for Disease Control and Prevention.

Most of them remain dependent on their parents and families for support well into adulthood, or they end up living in a home under the care of professional caregivers. Only a fraction of adults with developmental disabilities end up finding steady employment.

But some people are finding work and a path to self-reliance by working in the food industry. Parts of this industry are particularly well-suited to many people with developmental disabilities, like Victoria Reedy of Schenectady, N.Y.

Reedy is 23 years old and lives with her parents and two sisters. When I met her in her parents' home, she was dressed casually in a sweatshirt and wore sparkly nail polish. She's of average height now – about five feet five inches – but growing up, she says, she was a very small child.

"I was 6 years old, and the same size as my little sister who's four years younger than me," says Vicky.

She has a condition called panhypopituitarism, which is a problem in her pituitary gland that causes it to not produce enough hormones, including growth hormone.

Vicky's condition affected the development of her brain as well. She struggled with a range of learning problems while growing up, and school felt extremely hard. "I struggled at just about everything but art," she says. "I had a really hard time reading, [a] hard time writing, and learning things in general."

Her speech was affected, too. And she shied away from social interactions. As she grew up, she depended on her parents and a close friend for everything outside her home, from getting around to handling money. 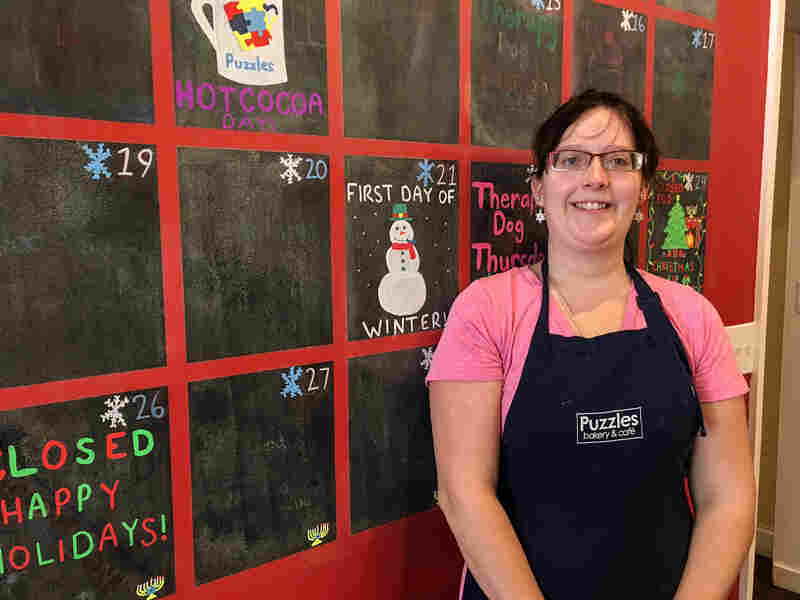 Victoria Reedy, 23, has worked at Puzzles Bakery since the day it opened in 2015. It's her first job as an adult and she says it has helped her grow and become more independent. Rhitu Chatterjee/NPR hide caption 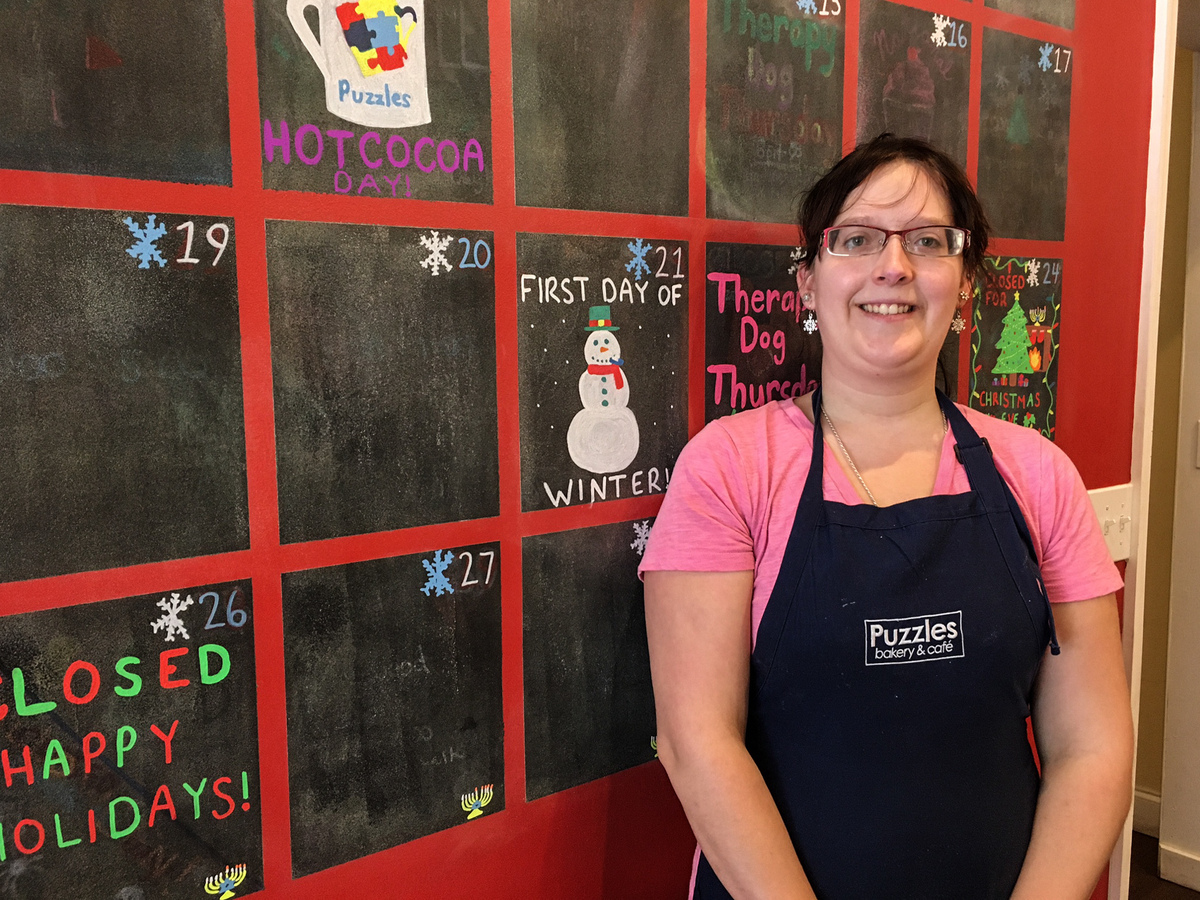 Victoria Reedy, 23, has worked at Puzzles Bakery since the day it opened in 2015. It's her first job as an adult and she says it has helped her grow and become more independent.

But today, Vicky is a very different person. She's more confident and independent. She even takes the bus everywhere, all by herself. "I take the bus just about everywhere I have to go, unless I'm traveling with Mom or Dad or any of my friends," she says.

That's because a year and a half ago, Vicky got a job at a bakery in downtown Schenectady.

Puzzles Bakery & Cafe in downtown Schenectady is bright and spacious. The winter sun filters through the glass door and windows and fills the front of the café. On the day I visit, it's packed with customers sitting down for lunch at the small white tables lined on either side.

Vicky is a senior café attendant here. She stands behind the counter, matching orders coming out of the kitchen, making sure the right order goes to the right tables.

Vicky also handles customers herself sometimes. She trains interns, organizes food and clean tables when necessary. Some of her favorite tasks, though, involve working behind the scenes, in the kitchen. She loves doing dishes, slicing meat and cheese on an electric food slicer. It's mechanical, somewhat repetitive work that takes time, but Vicky says she finds it satisfying.

In the time that she has worked here, Vicky has even made new friends among her colleagues. Her colleagues say she has grown tremendously at the job. She's now one of the few employees who have a key to the store, so she can open and close the café when necessary.

Sara Mae Pratt, 26, is Vicky's boss and the owner of the cafe. She says she's very proud of Vicky. "She's come such a long way."

As have many of her other employees, who have some sort of a developmental disability. Pratt opened Puzzles Bakery & Cafe in April 2015 with the goal to employ people with special needs, who otherwise struggle to find jobs. "There [are] not a lot of opportunities, certainly not in the way of employment," Pratt says. Once they graduate from the school system, they often "kind of fall off a cliff," she says.

And statistics back up her point. According to the U.S. Bureau of Labor Statistics, the percentage of working-age people with disabilities who are employed is about one-third of the percentage of people without any disability. And some 50 percent of people who are employed struggle to complete their tasks due to their disabilities, according to the BLS. Many face compensation gaps and discrimination at their workplace, according to the Arc of the U.S.A, an advocacy group for the developmentally disabled.

The BLS also finds that those who are unemployed report many obstacles to finding employment, including the absence of sufficient and appropriate training.

Pratt knew a lot of this from her personal experience. Her 23-year-old sister, Emily, has autism. As her sister approached adulthood, she says, she and her parents worried what her sister would do once she graduated high school and no longer had any support from the state education system. "I certainly struggled with what my sister will be doing for the rest of her life. She has a very long life ahead of her."

Her sister is too disabled to work – she recently moved out of their parents' home and into a group home, where she could have round-the-clock help. But Pratt wanted to help those who could work, to find a sense of self-reliance and purpose in their lives.

Before deciding to open a café, she did a lot of research and found that working with food is a particularly good fit for many people with developmental disabilities. For one, "food is very forgiving," she says. "If you mess up, [it's] not a big deal. You can throw it away, try it again."

And it's no surprise that Vicky enjoys simple, repetitive tasks like doing dishes and slicing and arranging food, she says. "It can be quite therapeutic to kind of do the same thing day in and day out, and it's something many people with developmental disabilities can actually excel at."

There is another factor about this work that helps people like Vicky overcome their struggles with social interactions. "They actually get to take part in the creation of this food and bring it to the customer and see that smile on their face," says Pratt. "They're seeing this day in and day out. That's the really wonderful thing about food, it really connects people." 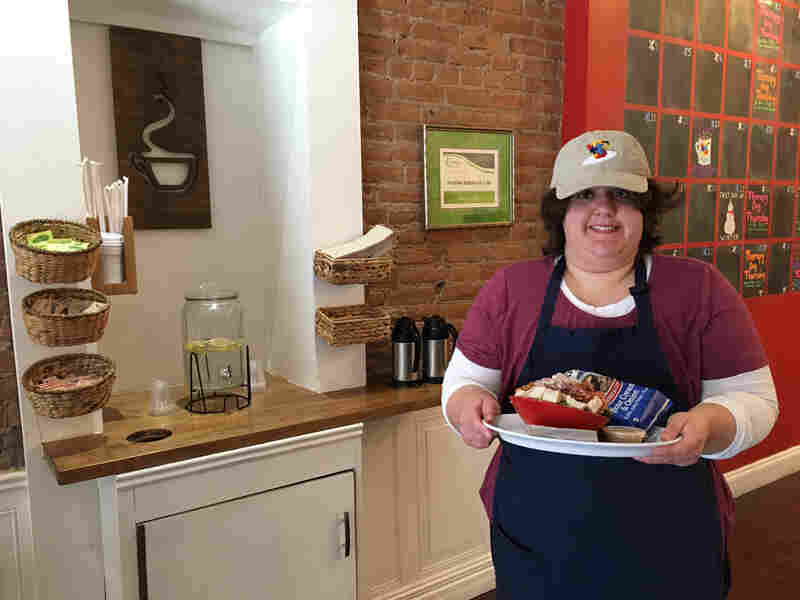 Madaline Hannon, 23, a café attendant at Puzzles takes a sandwich to a customer. Hannon has autism. Her parents say the job has helped her become more social and independent. Rhitu Chatterjee/NPR hide caption 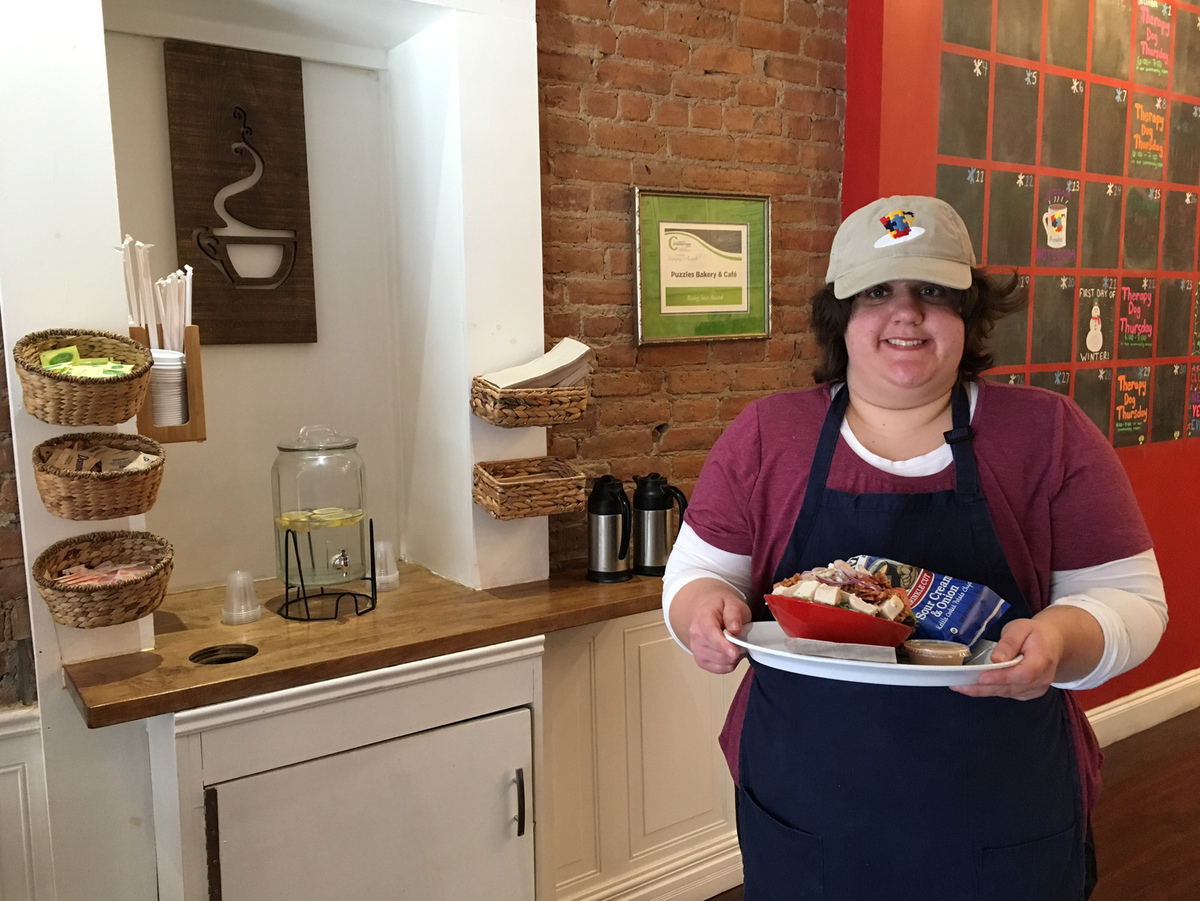 Madaline Hannon, 23, a café attendant at Puzzles takes a sandwich to a customer. Hannon has autism. Her parents say the job has helped her become more social and independent.

Similar bakeries and restaurants exist elsewhere in the country. Some, like Jack's Bar & Grill in Arvada, Colo., employ people with special needs. Others, like Sunflower Bakery in Gaithersburg, Maryland, also train and then place such individuals at other businesses in the food service industry.

Today, more than 50 percent of Pratt's employees have a developmental disability, she says. That includes 23-year-old Madaline Hannon, who has autism. She has limited vocabulary and according to her parents, she has always been painfully shy.

Now, though, Hannon works four days a week at Puzzles. She only works three hours a day and spends a lot of it serving customers, mostly during the lunch rush.

Dressed in a loose T-shirt, jeans and a baseball hat, Maddy stands behind the counter, keeping an eye on every plate of food that comes out of the kitchen through a little window on the wall behind the café's counter. She matches the food on the plate with the orders flashing on a little screen above the window, then she calls out the order loudly to find the right customer. "Order for Mary Ann!" she says, holding a plate with a sandwich in her hands. When the customer raises her hand, Maddy walks over the plate of food to her, then wishes her a good day. She rarely makes eye contact, but she interacts with every customer as she serves them their plate of food.

And she tells me she enjoys the work. She's been working here for about a year and a half, and she says she now has big dreams for her future.

"I wanna work at Disney World, in a bakery," she says. "They have more gourmet stuff."

Maddy still lives with her parents and unlike Vicky, she still depends on them to bring her to work and take her home at the end of her shift. So, I ask her if she'd be willing to leave her parents' home and move out of Schenectady to pursue her dream. "Definitely, yes," she says with a smile.

Her mother, Kathleen Hannon says, this job has transformed her daughter.

"[The] Maddy that walked in here the first day probably didn't say hello to people who'd come in," she says. "Today, she's out there. I know she will talk to the customers. And we've seen a big difference at home. She's happy!"

She says her daughter recognizes that she'll always need extra support, but the job has made her realize how much she can do on her own.

"She's wandering further and further away from us," says Kathy Hannon. "She's looking for more independence."