Accessibility links
Bountiful Beach Buffet: Fresh Seaweed Is Making Waves Among Foragers : The Salt Ocean algae is plentiful and grows rapidly, and most of it is safe to eat. People have been harvesting seaweed for thousands of years, but now it's become so popular, you can even take a class. 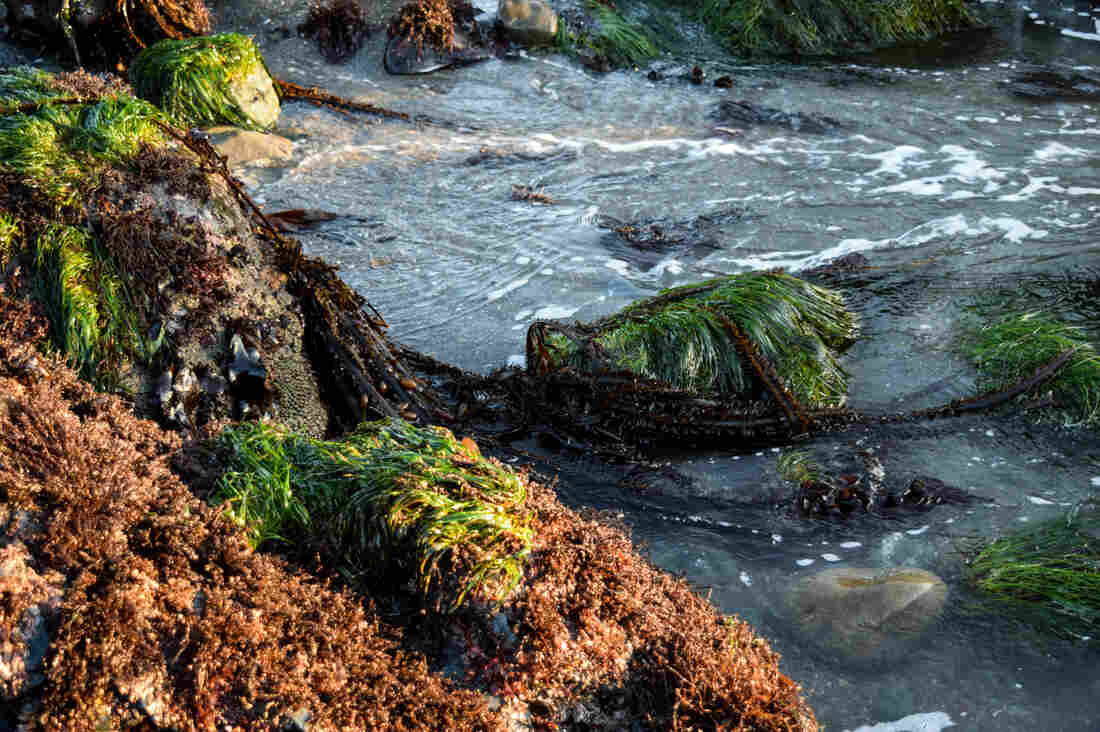 Seaweed is plentiful and grows rapidly, and most of it is safe to eat. People have been harvesting seaweed for thousands of years, but now it's become so popular, you can even take a class. Joy Lanzendorfer for NPR hide caption

As seaweed continues to gain popularity for its nutritional benefits and culinary versatility, more people are skipping the dried stuff in the grocery store and going straight to the source: the ocean itself.

At low tide on West Coast beaches, foragers hop between rocks looking for bladderwrack, sea lettuce and Irish moss to take home with them. Sea vegetable foraging has become so common, in fact, that you can take a class to learn what to harvest and what to avoid. 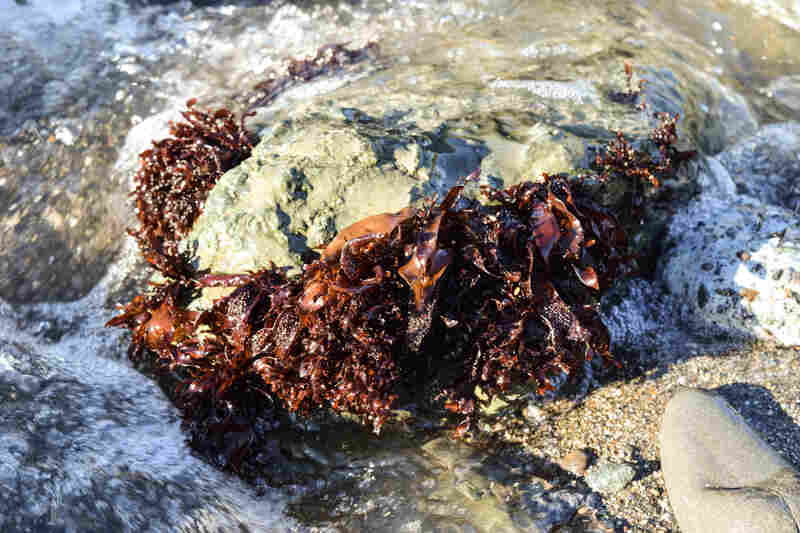 Turkish towel growing on a rock. Some chefs like to boil this seaweed down for a natural thickener for sauces. Joy Lanzendorfer for NPR hide caption

"Seaweed foraging is more popular than it used to be," says Heidi Herrmann, owner of Strong Arm Farm in Healdsburg, Calif. "With the rise of those little flavored snack packs of seaweed that kids eat in their lunches, seaweed is now a normal household word."

Herrmann commercially forages seaweed to sell to restaurants in places like Napa and San Francisco. She also leads seaweed foraging classes several times a year. The only equipment her students need is a pair of scissors and a bag to carry the seaweed. It's one of many foraging classes offered along the West Coast. They can cost anywhere between $90-$445, and can last for several hours or several days. Some include cooking lessons. Others teach how to harvest seaweed from a kayak.

With or without a class, seaweed may be the safest food to forage. Unlike mushroom foraging, where many species can kill you, there are no deadly seaweeds. This has led to the idea that it's safe to "eat the beach," which is not exactly true. Some seaweed should be avoided. For example, consuming a lot of acid kelp (Desmarestia ligulata) can cause intestinal distress. As with all foraging, research is key. 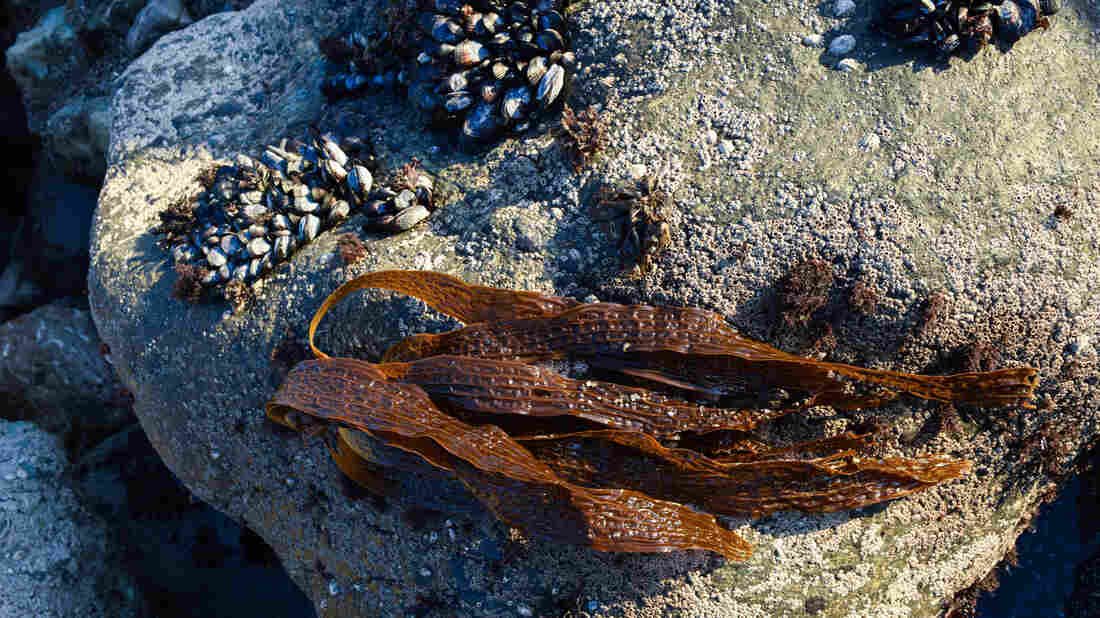 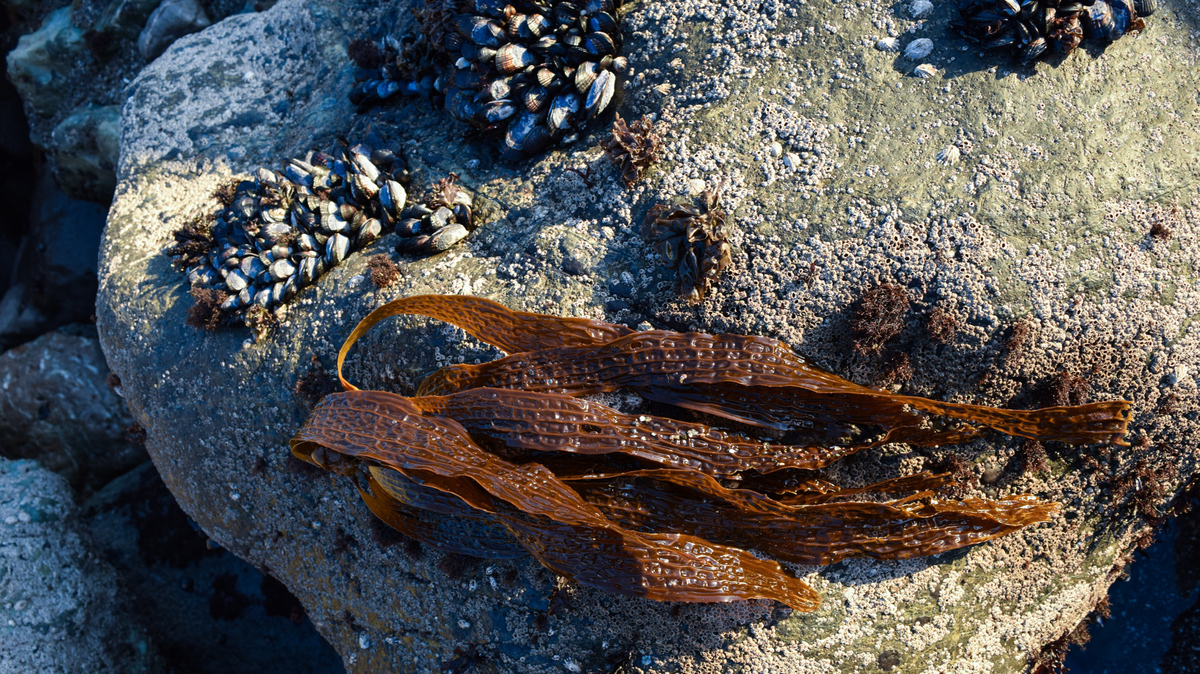 "Those general rules that say, 'All of this is edible' or 'All of that is edible' [are] a lazy person's way of not having to know anything," says John Kallas, a researcher and educator for Wild Food Adventures in Oregon. "You don't just blindly go out and gather stuff. Knowledge is what keeps you safe."

Still, as Kallas is quick to point out, the beach is full of edible seaweed. Many West Coast varieties are similar to well-known Asian seaweeds. This includes versions of nori, which the Japanese use in sushi; kombu, the base for the broth dashi; and wakame, commonly used in seaweed salad.

There are also lesser-known varieties, like sea lettuce, a delicate green seaweed also used in salads. Then there's bladderwrack, which looks like flattened deer antlers and can season meat or thicken sauces. Another example is dulse, which looks like red film tape and is commonly dried and flaked into dishes for seasoning. 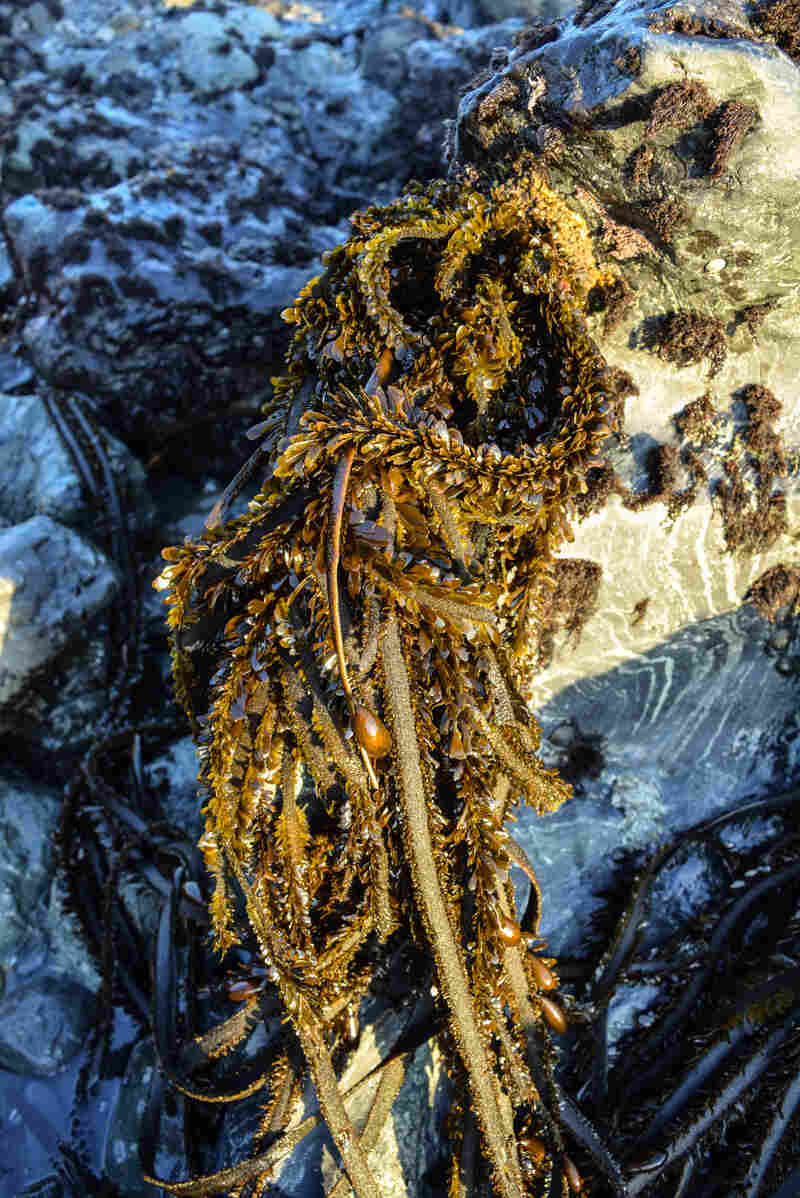 Feather boa kelp has a leathery strap and small blades that give it a corrugated, leafy appearance. Not only are the leaflets edible, so are the hollow oval bladders that keep the plant afloat. Joy Lanzendorfer for NPR hide caption

Even something as unappetizing as feather boa kelp can have surprising culinary applications. This aptly named kelp — it looks like something you'd wear to a costume party — has a leathery strap and small blades that give it a corrugated, leafy appearance. Not only are the leaflets edible, so are the hollow oval bladders that keep the plant afloat.

"The bladders are a great substitute for olives," says Kallas. "But when you bite them, they pop."

Seaweed is high in protein, and contains Vitamin B12, iodine and omega-3 fatty acids. It can be a natural source of MSG, which helps provide a savory umami flavor in dishes. As such, seaweed can flavor soups, thicken sauces, be baked into bread or cakes, or dried and eaten like potato chips. Dennis Judson, who leads seafood foraging classes for Adventure Sports Unlimited, recommends making pickles out of seaweed, particularly bullwhip kelp, which is a long tube with a ball at the end that looks like a whip.

"I cut it into strips, like little donuts," says Judson. "Then I put it in jars and pickle it. Then I put the pickles in Bloody Marys. They're delicious."

Seaweeds are algae, not plants. They're divided into three types: red, green and brown. (Kelp is a type of seaweed.) Like plants, seaweed uses photosynthesis to convert sunlight into energy. While they can be harvested all year, they're usually at the height of growth in spring and summer. They often grow rapidly, as much as two feet a day.

Because of this, most seaweed can withstand ethical foraging. The important thing is to only take the leaf-like blades and leave the hold-fast — essentially, the roots of the seaweed — intact so it can keep producing.

It's also important to check regulations before foraging, which can vary drastically based on location. Washington state requires a permit to forage, while Oregon restricts seaweed foraging to a season. California, on the other hand, allows personal seaweed foraging all year long, restricting it to 10 pounds per person a day.

Both the California and Washington state departments of fish & wildlife report increased interest in seaweed foraging from the public. But while harvesting seaweed may seem new, it's an ancient activity, stretching back thousands of years. For Herrmann, seaweed foraging is more than just gathering food. It's about feeling connected to the past, and to nature.

"When you're at the shore, you see all these colors and textures and creatures, so many questions come to mind," she says. "And it's timeless in the sense that you're collecting food in a way that has been done for so many years before you, in so many cultures and climates. So it feels like being in a long continuum, and the practices of gathering food in general."

Joy Lanzendorfer is a writer based in Petaluma, Calif. Her work has appeared in The Atlantic, Smithsonian, and others. She's on Twitter @JoyLanzendorfer.