Accessibility links
Not Just A Crock: The Viral Word-Of-Mouth Success Of Instant Pot : The Salt Launched in 2010, the multifunction cooker became a sleeper hit last year. That's when its maker harnessed the enthusiasm of owners – self-dubbed "addicts" – to spread the word online. 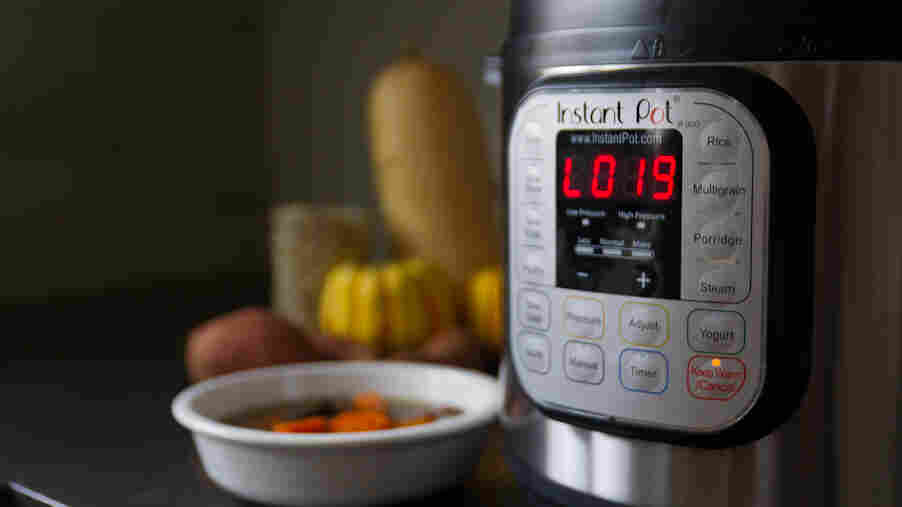 The hardworking Instant Pot, touted by its fans on social media, is Amazon's top-selling item in the U.S. How it got to No. 1 is a lesson in viral marketing savvy. Grace Hwang Lynch hide caption 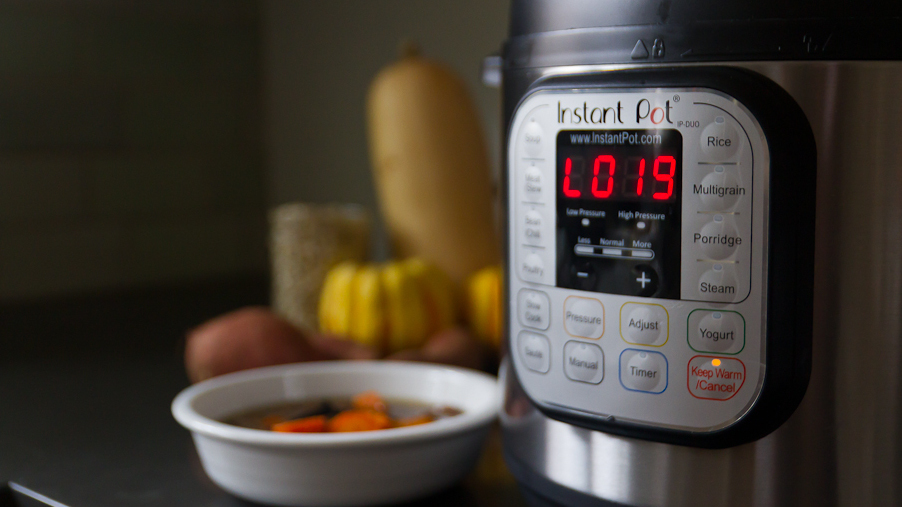 The hardworking Instant Pot, touted by its fans on social media, is Amazon's top-selling item in the U.S. How it got to No. 1 is a lesson in viral marketing savvy.

Chances are you or somebody you know has recently become the owner of an Instant Pot, the multifunction electric pressure cooker that can produce fork-tender pot roasts in less than an hour, as well as brown meat, cook beans without soaking, and even do the job of a rice cooker or crockpot. The Instant Pot­­ isn't advertised on TV or in the newspapers, and yet it's become a viral marketing success story, with owners often describing themselves as "addicts" or "cult members." That's the kind of word-of-mouth publicity Instant Pot founders dreamed of when they first began designing the countertop appliances.

The Instant Pot electric pressure cooker has been around since 2010, but really became the buzz during the last six months of 2016. While the company's electric pressure cookers are sold at Wal-Mart, Target and Kohl's, the bulk of its sales come from Amazon, driven by social media. Deep discounts on Amazon Prime Day and again on Black Friday, along with the viral online sharing of these sales, turned Instant Pot into a household name. With 215,000 units sold on Prime Day alone, the Instant Pot Duo is Amazon's top-selling item in the U.S. market. Not bad for a company that does no TV or print advertising and only recently began the process of hiring a marketing agency.

The 25-employee Ottawa, Canada-based Instant Pot Company was founded by a group of engineers, not chefs, in 2008. The team focused on designing the appliance's microprocessor and thermal and pressure sensors, which improve safety over earlier stovetop and electric pressure cookers, hoping that the product would speak for itself.

"Cooking is very much a social behavior. If people make good food, they will be raving about it, including the tools used," says CEO Robert Wang. In order to attract cooks from different cultures, the Instant Pot has preset buttons for making foods such as porridge, beans and yogurt.

Instant Pot is savvy enough to know that social media is now part of word-of-mouth advertising. While the company does not sponsor paid content or promotions, it has provided free Instant Pots to 200 bloggers and cookbook authors who represent many styles of cooking, including Chinese, Italian, sous-vide and vegan. The company's website and the booklets that come with the appliance prominently feature blogger recipes.

Harvard Business School professor Sunil Gupta calls this "sleeper" marketing, which gets a product in front of a small, influential group of people, instead of targeting the masses. This type of marketing is a method that may work for companies that don't have a big budget to do an advertising blitz when a product first rolls out.

"The company has to have a little bit of patience," Gupta says. "Sometimes it catches on really quickly but sometimes it doesn't. There are a lot of failures that happen with this kind of mechanism. If you are a small player, it's a good strategy to try."

He notes a similar strategy used by the Blendtec company, which posted a YouTube video showing the company's CEO using the blender to grind up an iPhone. "As you can imagine, the video got shared," says Gupta. "But, it was consistent with the key value proposition of the product," meaning that the hype reinforced what the appliance says it will do.

Michelle Tam, author of the Nom Nom Paleo blog and cookbook, bought an Instant Pot in 2013 when seeking a faster way to make the bone broths and braised meats that are integral to her diet. "I put a lot of Instant Pot recipes on my blog just because I use it myself," she explains.

Laura Pazzaglia, author of the cookbook and website Hip Pressure Cooking, has worked as a paid consultant to Instant Pot, producing demo videos, but she also works with other pressure cooker manufacturers. While kitchen appliance giants such as Cuisinart, Breville and Fagor also produce electric pressure cookers, Pazzaglia praises the Instant Pot's convenient features, particularly the stainless steel inner pot. Of course, a catchy name doesn't hurt either. "Like Kleenex came to represent tissues and Xerox photocopiers, Instant Pot is coming to represent electric pressure multi-cookers," says Pazzaglia. "It's both corny and fun and doesn't come with any of the hang-ups and historical fear that the words 'pressure cooker' bring about."

I'll admit: I bought one of those Instant Pots on Amazon Prime Day last July. For me, the tipping point was seeing my friend, Lizz Porter, of the blog More Than Thursdays, posting about the $69 sale, a 30 percent markdown from its regular $99 price. Like many bloggers, Porter posts Amazon affiliate links on her website, as well as on her Facebook and Twitter feeds. She says approximately 50 Instant Pots were purchased through her links in the second half of 2016. I asked her if the income from those sales was a factor behind her social sharing.

"It's all bonus money," says Porter. "I'd still share the Instant Pot even if I didn't get commission, because it's made that much of a difference for us. With the Instant Pot, I can still get dinner on the table even if I only have frozen meat at 6 p.m., and I don't have to cook everything in the microwave!"

The viral popularity of the Instant Pot even has seasoned digital marketing pros scratching their heads. Jim Lin, senior vice president and creative director of Ketchum Digital oversees social media engagement and influencer programs for the agency's key clients, and he is surprised by how many parent bloggers are talking about the Instant Pot on social media — even when they are not being paid to promote it.

"What I think is the magic of this phenomenon was the fact that the Instant Pot owners have become almost like a club that every parent wants to be a part of," says Lin. A search of Facebook turns up many Instant Pot community groups, including one run by the company with more than 300,000 members. Others groups specialize in Whole 30, Weight Watchers, vegan, Kosher or Vietnamese cooking. New pressure cooker owners post questions, while veterans show off their creations, including the ever-popular bone broth and cheesecake recipes.

"Instant Pot caught a good wave," says Lin. "It could have easily gone the other way with one mishap that people talked about. That could have destroyed the brand reputation."

But Gupta believes consumers are sophisticated enough that a few bad reviews won't hurt, as long as they are offset by positive ones. "There's a large number effect," he says. "On the average it will be reasonably close to the truth." With a new model due to be released in sometime in 2017, the Instant Pot craze shows no signs of cooling off.

Grace Hwang Lynch is a San Francisco Bay Area-based journalist with an interest in race and how it affects everything, including food, entertainment and parenting. Her work has been published by PBS, PRI, Library Journal, Salon and xoJane. Follow her on Twitter: @GraceHwangLynch