Accessibility links
Farm Of The Future: What Grows In Las Vegas Stays In Las Vegas : The Salt Crops like radishes, jicama and cilantro will soon be grown close to the Strip, so restaurants will have immediate access to fresh ingredients, instead of having to wait for trucks from California. 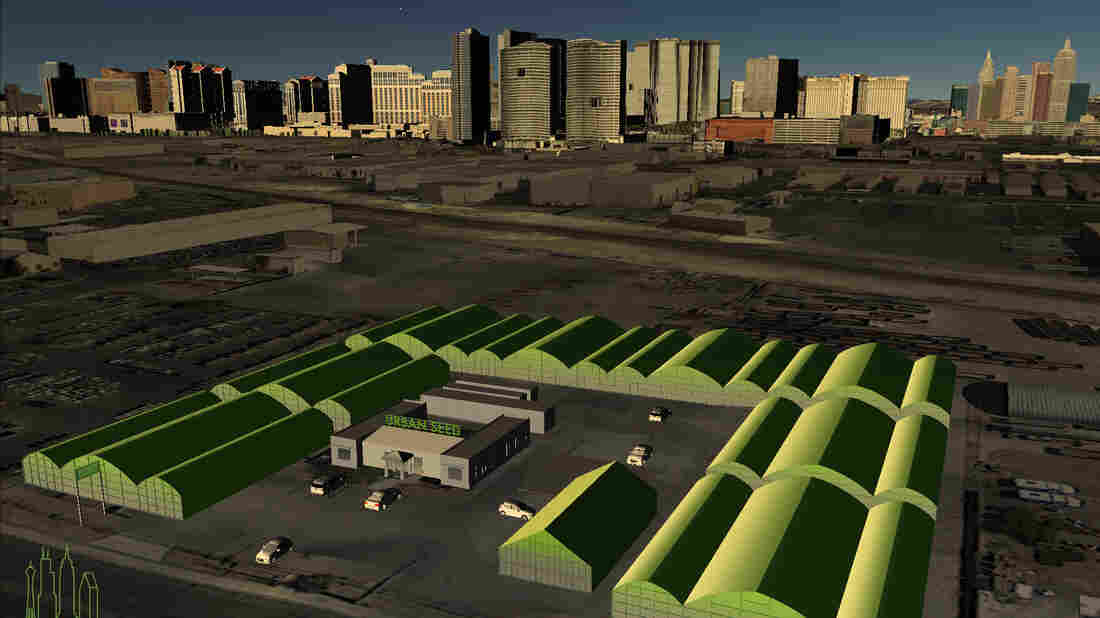 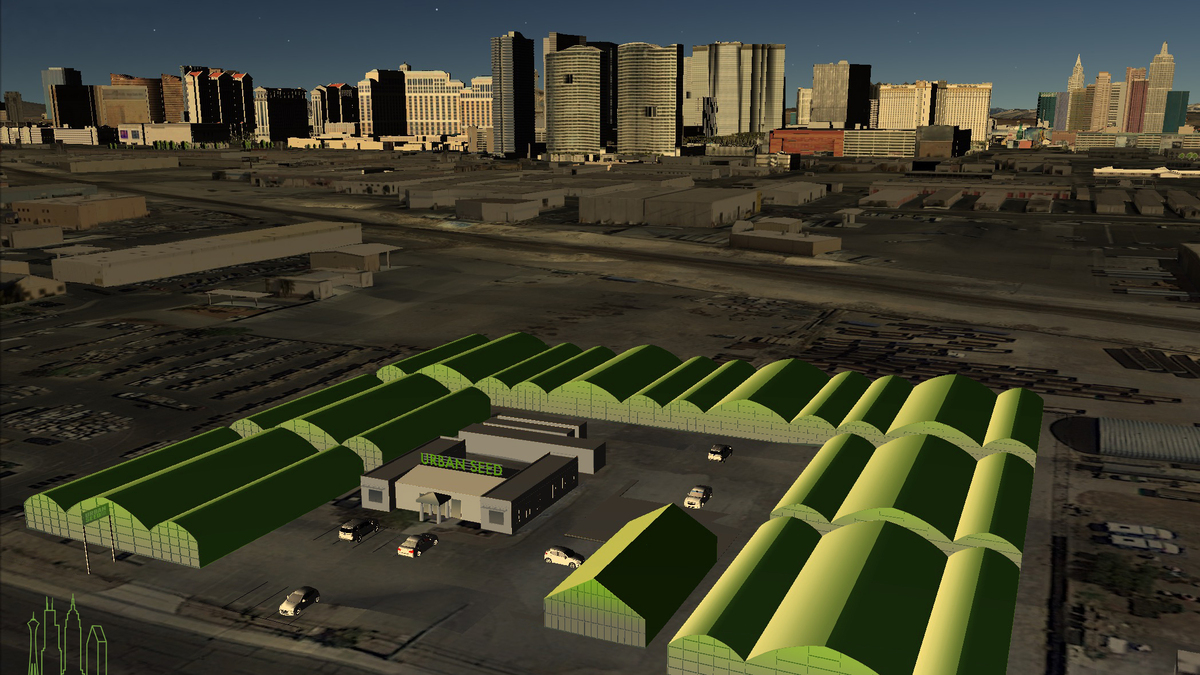 Urban Seed plans to grow 25 different crops, from bell peppers to beets to alpine strawberries, in high-tech greenhouses smack in the middle of Las Vegas.

Every day, Border Grill restaurant at Mandalay Bay Resort and Casino in Las Vegas uses a case of tomatillos and at least a case of cilantro. The tomatillos go into dishes like the pozole verde, a spicy stew with chicken and hominy. The cilantro goes into the green rice, the guacamole, the Yucatan pork roasted in banana leaves and just about everything else.

"The Mexican kitchen is very produce heavy," says Border Grill co-chef/owner Mary Sue Milliken. A lot of the ingredients that she and partner Susan Feniger use most frequently also suffer the greatest in transit. Radishes, jicama, that delicate cilantro, they all die so fast, Milliken says.

Nearly every last piece of produce in the kitchen and on the plate at Border Grill's two Las Vegas locations comes from somewhere else. Most of it is trucked in from California — farm to table, with some freeway in between.

But as winter takes hold across the country, a new farm is working to change that. Come spring, Milliken and other chefs like her will be able to source fresh fruits and vegetables harvested blocks from the Las Vegas Strip.

Last July, Urban Seed broke ground on its first farm, an assemblage of high-tech greenhouses located on a small plot of land smack in the center of Las Vegas. Eventually the space will hold six 6,500-square-foot greenhouses that will produce 25 different crops, from bell peppers to beets to alpine strawberries.

If an agriculture company launching in the desert sounds counterintuitive, that's entirely the point.

Urban Seed will be the largest local farm in terms of yield, but isn't the first company to attempt farming in the desert. An Australian farm made headlines last fall for growing produce using solar-powered greenhouses and seawater desalinated onsite. The Sahara Forest Project has constructed saltwater-cooled greenhouses in Qatar and is working on a new farm in Jordan. In Las Vegas, the University of Nevada Cooperative Extension has a one-acre outdoor research orchard, and Las Vegas Herbs grows hydroponic microgreens in a 5,000-square-foot greenhouse.

Urban Seed, however, is taking a different approach. The company's strategy for growing in Las Vegas, where summer temperatures regularly top 110 degrees and annual rainfall amounts to just over four inches, is based around a proprietary aeroponic system focused on producing large amounts of food using limited space and resources. The growing system layers plants vertically, but unlike the vertical indoor farms catching on in other cities, its Las Vegas location will be single story and will rely on the area's plentiful sunlight – not artificial LED lights.

To develop Urban Seed's technology, a team of growers and engineers spent years in research and development, testing various indoor farming methods like aquaponics and hydroponics. Eventually they arrived at their current model, where plants are stacked inside of A-frames and grown aeroponically, with roots suspended in the air and water and nutrients delivered via fog. Each varietal gets its own custom nutrient mix, a secret-sauce smoothie to mimic optimal growing conditions.

"They get the exact environment, the exact nutrients that they need," says Wenman.

Each A-frame is also a closed loop that recaptures and recycles excess moisture. While a conventionally grown head of lettuce uses about 13 gallons of water to reach maturity, in an Urban Seed greenhouse, lettuce will grow on just 22 ounces, based on testing of the technology at facilities in Los Angeles, Las Vegas and Arizona.

Stacking the plants also maximizes growing space. In a 24-square-foot area, Wenman projects that Urban Seed will be able to grow more than 500 heads of lettuce in 30 days, compared with roughly 50 lettuce heads that might grow during that time on a traditional outdoor farm.

That number might sound hyperbolic, but it's actually pretty conservative when you compare it to estimates for vertical indoor farms currently getting lots of buzz. In Newark, for example, AeroFarms claims per-square-foot yields that are 130 times those of field farms.

"In the same amount of space indoors, you can raise 10 to 100 times what you can do outdoors," says Dr. Dickson Despommier, a professor emeritus at Columbia University and author of The Vertical Farm: Feeding the World in the 21st Century. Although Urban Seed's founders call their model a vertical farm, Despommier – who literally wrote the book on the subject – doesn't think the term applies because its buildings in Las Vegas are single story.

The key benefit to growing indoors is the controlled environment: no variance in weather, water, temperature or humidity, no pesky insects, no pests raiding the field for free snacks. When that indoor farm is placed in an urban center, there's also no long-distance shipping, cutting down on the carbon footprint and allowing food to be harvested at peak ripeness, when it tastes the best and packs the most nutritious punch.

With about 42 million annual visitors and a local population of around 2 million, as a test market, Las Vegas is ripe for new sources of produce.

"The longer the produce has to sit in the field and then in the warehouse and then [go through] three or four middlemen and then, finally, getting into the hands of chefs, the more flavor that is lost along the way," says Border Grill's Milliken, who is part of Urban Seed's culinary advisory board.

When the company begins harvesting in spring or early summer, its first customers will be chefs who'll turn the morning's harvest into the evening's menu.

"Just by virtue of the proximity and the freshness it should be better than everything I'm buying, says Milliken. "Having that proximity gives us an opportunity for the flavor to be enhanced so much."