Accessibility links
'Speed Dating' For Farmers And Chefs: ISO A Perfect Local-Food Match : The Salt Farmers are shy; chefs are ferocious. But they need each other to put local food on restaurant tables. A "speed-dating" event in Washington, D.C. matches farmers with chefs, aided by free beer. 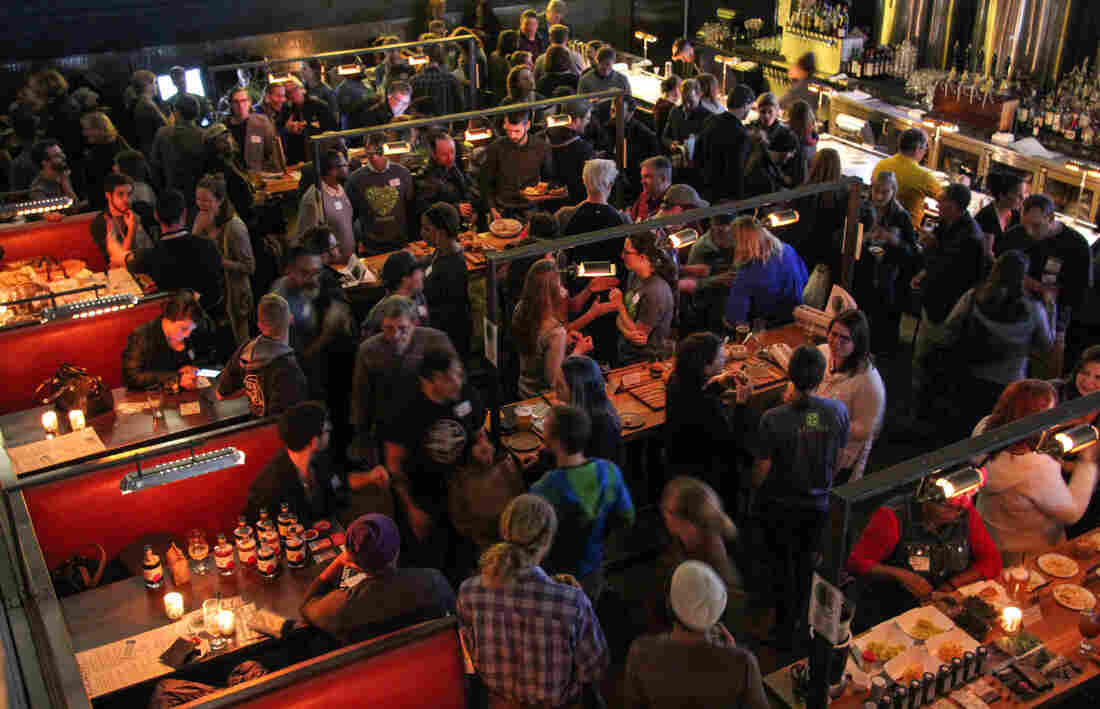 Farmers and chefs looking for their perfect match at Bluejacket, a restaurant and brewery in Washington, D.C. Dan Charles/NPR hide caption 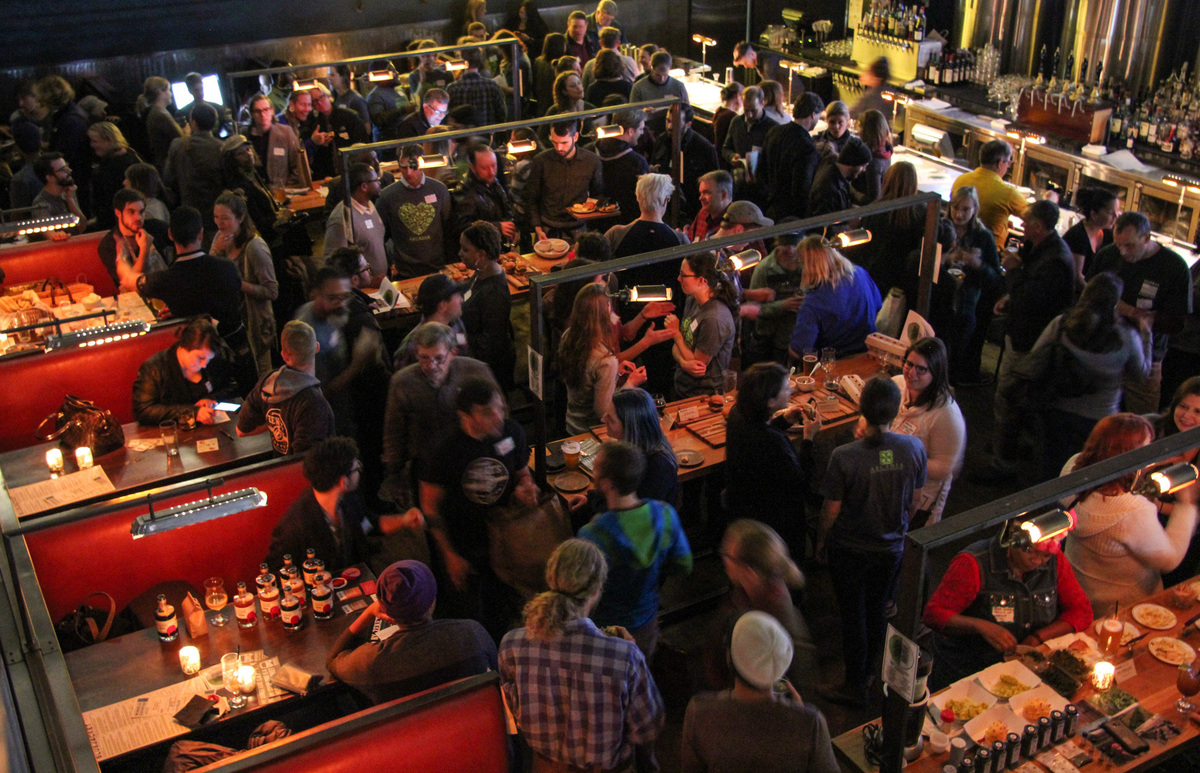 Farmers and chefs looking for their perfect match at Bluejacket, a restaurant and brewery in Washington, D.C.

Last week, as official Washington obsessed over the Coming Of Trump, there was a gathering in our nation's capital that had almost nothing to do with the inauguration or politics.

It took place at a sleek and stylish restaurant/brewery called Bluejacket, built inside the walls of an old factory. It's a striking and airy space, the dining room framed by tall fermentation tanks made of gleaming steel.

Ashley Heaney and Mark Heaney, from Green Acres Family Farm in Gapland, Md., are sitting in a booth on one side of the room, looking expectant and a little tense. They have a cooler full of eggs from their pasture-raised chickens beside them. This is their chance to show off those eggs to a collection of big-city chefs.

They're here for matchmaking, though not of the romantic sort. It's an annual "speed-dating" event where farmers get set up with chefs, in an effort to put more local food on restaurant tables.

"When I heard about it, I basically filled out the application right away," says Ashley Heaney. "I was very excited about it."

"Now that you're here, how are you feeling?" I ask.

"A little nervous," she admits.

"Kind of out of our element, you know," adds Mark Heaney. "We're farmers! We're not used to being in large groups of people. We're used to being out and working by yourself."

"But I think it's going to be fun," Ashley Heaney says, resolutely.

The matchmaker at this event is Pamela Hess, executive director of the Arcadia Center for Sustainable Food and Agriculture. She's been putting it on every year for the past five years. Hess makes sure that each farmer or chef who shows up gets a card with a list of potential matches. "We connected folks based on where they're located, what they grow, what they want to buy," Hess says.

Plenty of farmers and chefs are looking for these relationships, she says, but they don't happen naturally. Farmers and chefs generally live in different places. They work on different schedules. And according to the executive chef at Blue Jacket, Marcelle Afram, they're often very different people.

"We have these stereotypes in the industry, the farmer is shy and the chef is ferocious," she says. "So some mitigation with a couple of beers might help."

"Any truth to that [stereotype]?" I ask.

I meet one farmer, though, who doesn't seem shy at all: Cleo Braver, from Cottingham Farm in Talbot County, Md. "Braver," she repeats, when I don't quite catch the name. "You're brave; I'm braver."

"I happen to have the pinnacle of certified organic, pasture-raised, organic vegetable-fed, GMO-free sprout-fed, transitional organic grain-fed, heritage hogs available this week and next week," she tells me.

There's a light-hearted attitude filling the room. That attitude is working its way into my questions, too. But it doesn't sit well with Spike Gjerde, the award-winning chef at Woodberry Kitchen in Baltimore.

"I think it's anything but light-hearted," he tells me sternly. "What this is about is confronting some of the most serious aspects of our food system, and what we're trying to solve here is some of the ways that our food system is failing us."

Gjerde introduces me to a farmer standing nearby, Heinz Thomet, from Next Step Produce in Newburg, Md. Thomet grows old-style grain and mills it into flour. Gjerde buys that flour to bake the bread in his restaurant. It's spectacular food, Gjerde says, but you have to understand the effort that went into it, "and to get that on a table somewhere, and to get somebody to understand what that whole thing cost is a huge challenge."

The room is crowded now, and loud. The farmers wear green name tags; chefs have red ones. There are way more farmers than chefs. Nobody's quite sure why.

Despite that hiccup, most of the farmers and chefs I talked to were happy by the end of the evening. They said that they'd made some promising contacts. Mike Peterson, from Heritage Hollow Farms in Sperryville, Va., had sold a whole lamb, right on the spot.

And the Heaneys, who'd arrived feeling a little nervous, were smiling. Three chefs were interested in their eggs.