Accessibility links
A Sip Of History: The Hidden Wine Cellars Under The Brooklyn Bridge : The Salt The cool, dark caverns were a perfect place to store even the most delicate wines — and the income they generated helped offset construction costs of the massive 19th-century engineering project.

A Sip Of History: The Hidden Wine Cellars Under The Brooklyn Bridge

A Sip Of History: The Hidden Wine Cellars Under The Brooklyn Bridge 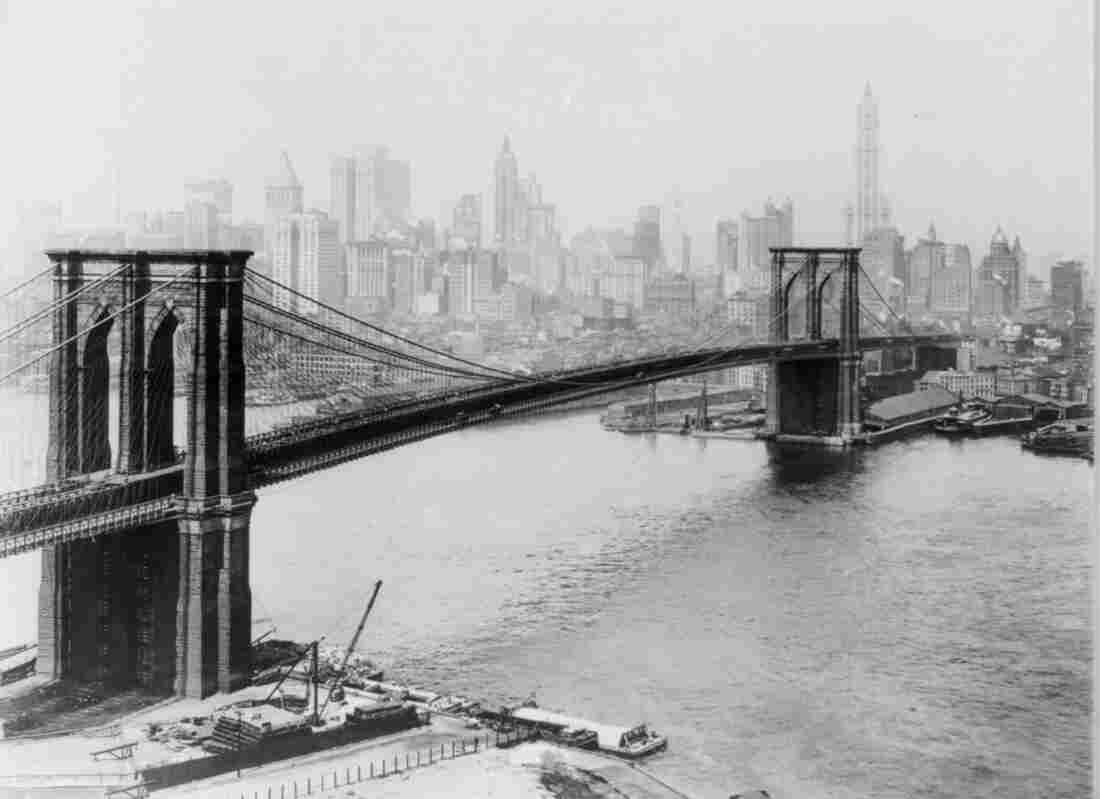 In 1915, the year this photo was taken, liquor vendors were still allowed to use the cool, dark chambers under the bridge. The Library of Congress hide caption

toggle caption
The Library of Congress 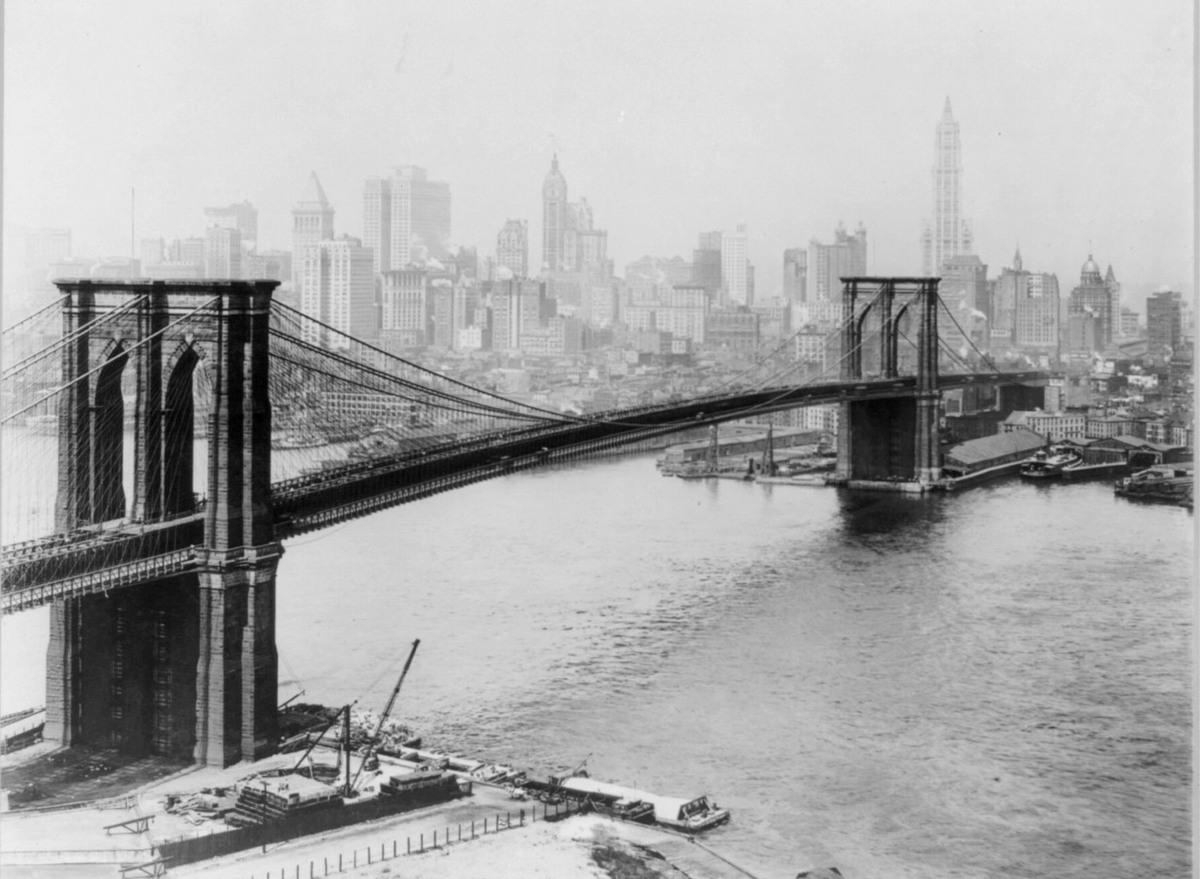 In 1915, the year this photo was taken, liquor vendors were still allowed to use the cool, dark chambers under the bridge.

The Library of Congress

A muted statue of the Virgin Mary received the revelers, a few hundred of New York City's fortunate elite, as they navigated the recesses of the dark, cool caverns underneath the Brooklyn Bridge on the Manhattan side. An orchestra struck up the first chords of the "Blue Danube." The ladies were careful not to lean against the slanted, peeling walls and the men minded their coattails. Amidst the stacks of wine crates stamped ANTHONY OECHS & CO., couples began to waltz. A bottle of fine champagne was passed around as a waiter produced a tray of crystal glasses. Overhead, Depression-era Packards and Hudsons motored along at a roaring 20 mph. It was July 11, 1934, and as The Pittsburgh Gazette eagerly explained, "the dry era" was finally over.

It was a celebration of new beginnings. When the Anthony Oechs wine distributors moved to the Brooklyn Bridge's wine cellar, dormant for almost two decades — the vaults would once again do what they had been built to do when they were established in 1876, seven years before the bridge was even opened for travel.

The wine cellars had originally been constructed as a sort of compromise. As chief bridge engineer, Washington Roebling (and his father John A. Roebling before him), developed plans for a roadway connecting Brooklyn and Manhattan, the question loomed over what to do with two establishments that were in the path of construction. On the Brooklyn shore of the East River, Rackey's Wine Company was doing steady business, and on the Manhattan side, Luyties & Co., sold its liquor to thirsty New Yorkers.

Roebling saw an opportunity to offset some of the bridge's massive $15 million construction costs. It was an ingeniously perfect fit. The design of the bridge would allow for two wine cellars, one on each shore, along with several other vaulted chambers, to be incorporated into construction. The chambers would be rented out to local businesses, which used them mostly for storage, to help pay off the city's debt. 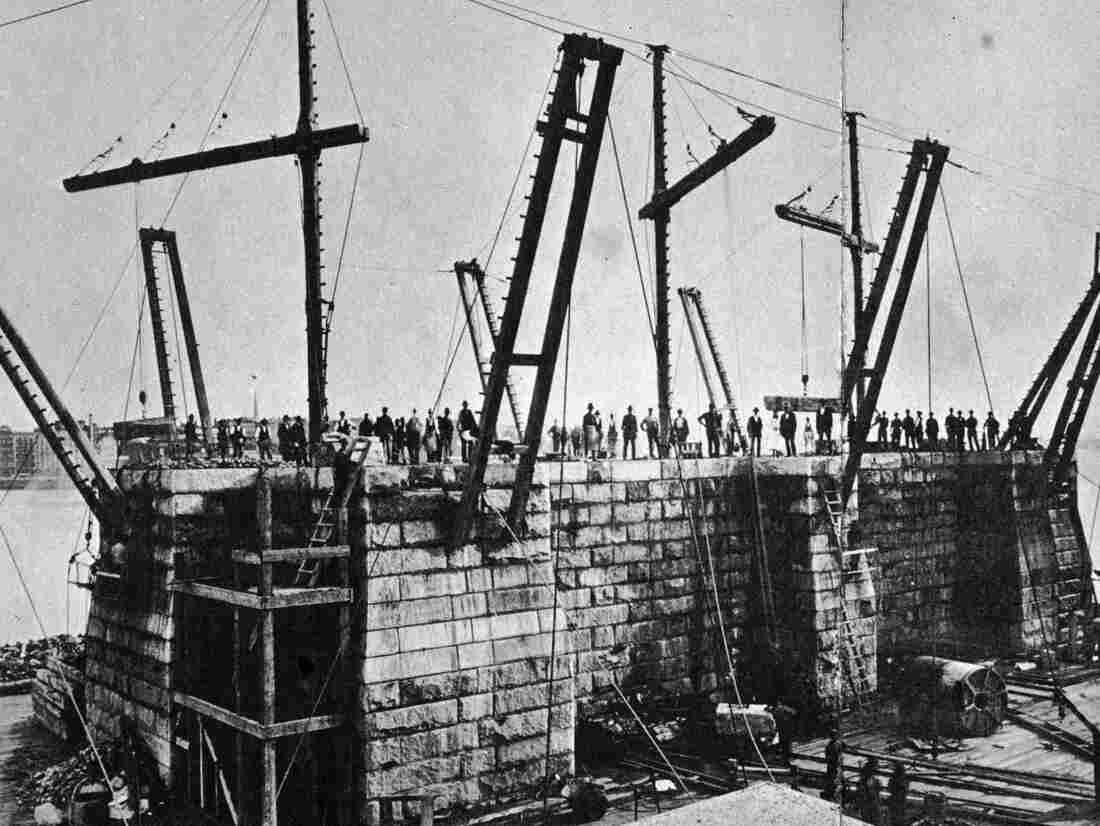 The design of the Brooklyn Bridge allowed for two wine cellars, one on each shore. Hulton Archive/Getty Images hide caption 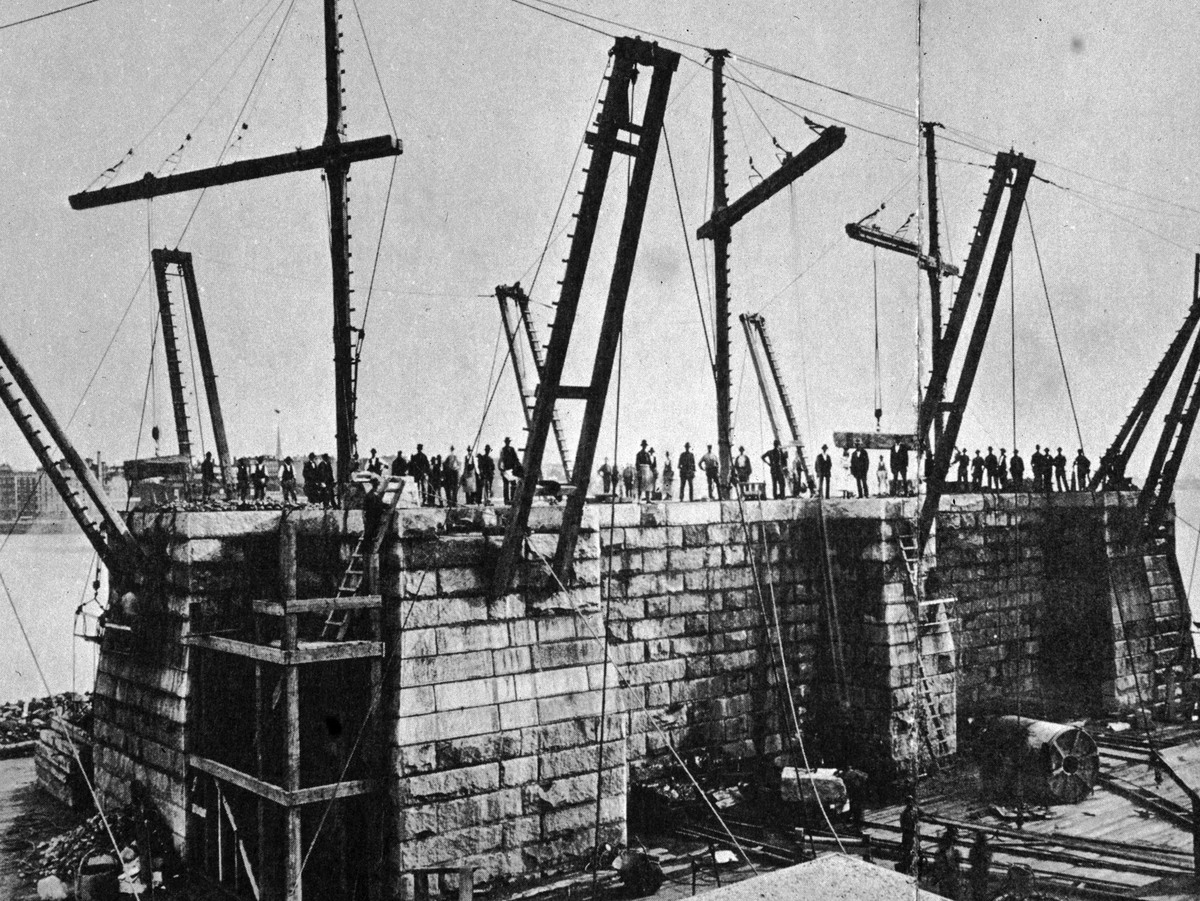 The design of the Brooklyn Bridge allowed for two wine cellars, one on each shore.

Roebling's plan worked, both architecturally and financially. According to The New York Times, as the bridge was erected in the 1870s, the wine vaults were built "beneath the ramps that lead up to the anchorages, within the arched granite and limestone approaches that span the intervening streets."

Over the course of the next 40 years, several different liquor vendors would utilize the cellars below the bridge. City records indicate, for example, that in 1901, the "Luyties Brothers paid $5,000 for a vault on the Manhattan side of the bridge," located at 204 Williams St., while in Brooklyn, "A. Smith & Company" forked over $500 a year to rent a wine cellar from 1901 until 1909.

Storing wine under the bridge made perfect sense. The caverns below the 60,000-ton granite entrances were dark and consistently cool, ideal places to house even the most delicate vintage Bordeaux, Burgundy or Champagne. And as the vaults became home to wines from across the globe, the dingy walls of the cellars were enhanced to reflect that heritage. The winding maze of caverns was transformed into a painted "labyrinth", with the names of French streets---Avenue Les Deux Oefs, Avenue Des Chateux Haut Brion-- stenciled overhead. Over time, the cellar walls were festooned with illustrations of provincial Europe; designs of sinewy leaves and purple grapes trailed along the stucco in subdued hues. 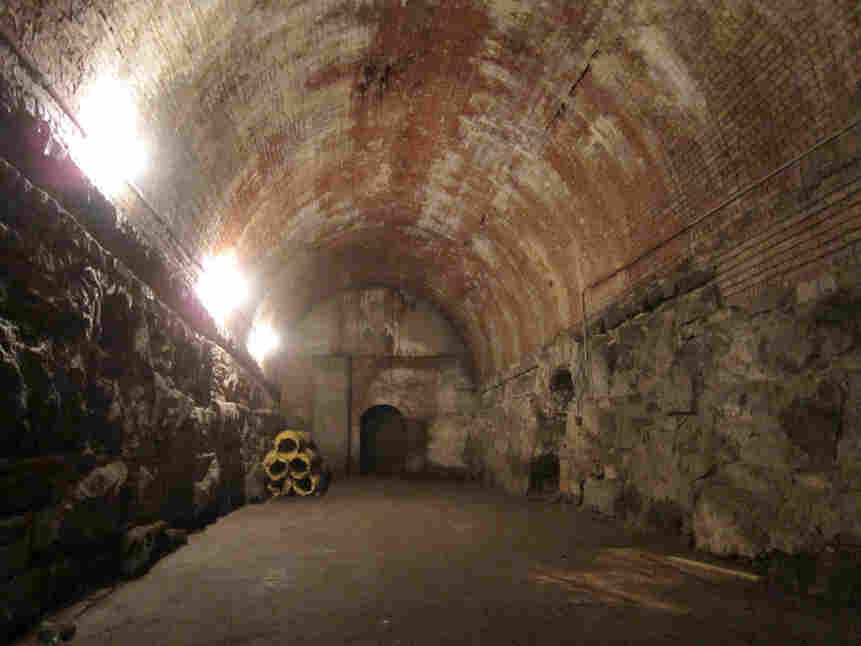 The caverns below the 60,000-ton granite entrances were dark and consistently cool, ideal places to house even the most delicate vintage Bordeaux, Burgundy or Champagne. Paul Fitzpatrick for NPR hide caption 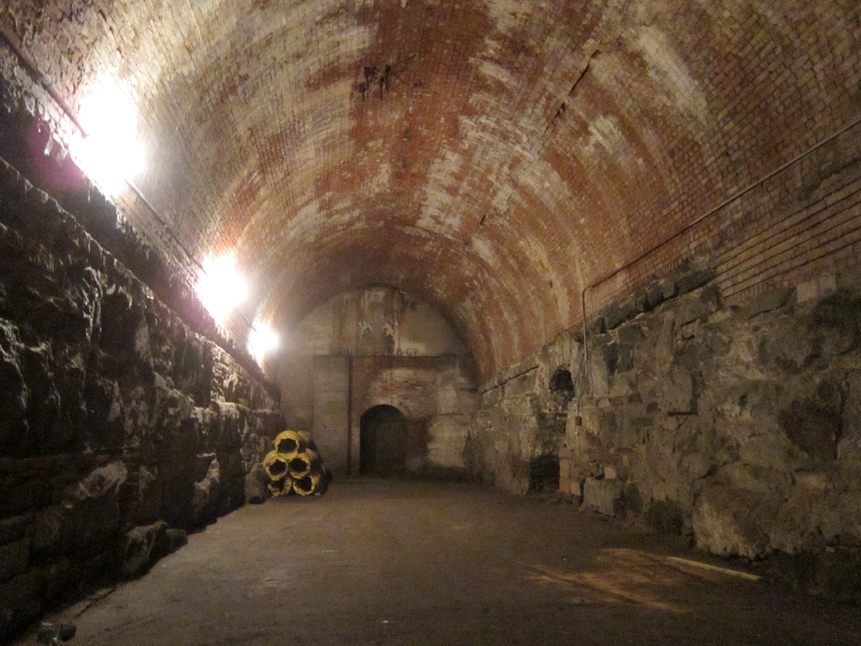 The caverns below the 60,000-ton granite entrances were dark and consistently cool, ideal places to house even the most delicate vintage Bordeaux, Burgundy or Champagne.

Later, the waltzing guests of 1934 would take a turn surrounded by cellar walls which displayed long-faded quotations, such as this one, attributed to either Martin Luther, father of the Protestant Reformation, or Johann Heinrich Voss, a German poet:

Who loveth not wine, women and song,

He remaineth a fool his whole life long.

No one remembers exactly when the statue of the Virgin Mary made its way to the small alcove in the Manhattan cellars. Legend has it that a vendor may have transported the stone figure, plucked straight from the Champagne cellars of Pol Rogers in Epernay, France. Those who saw the Madonna statue watching over the bridge's caverns likened the ethereal scene to Italy's Grotto Azzurra, or the Blue Grotto of Capri. The statue mysteriously disappeared sometime around 1942, but the sobriquet lingered.

By the late 1910s, as America debated the vices of liquor, the wine was moved out and the cellars were converted into newspaper storage. But the end of Prohibition in 1933 enticed new wine distributors. The storied celebration on July 11, 1934 was held in honor of Anthony Oechs & Co.'s move into the bridge's blue-black caverns. Champagne once again flowed through the Manhattan vaults. For just a few years, the era of the Blue Grotto would be reborn. After World War II, for logistical reasons, the city of New York would take over permanent management of the cellars.

But the rare few who have been allowed to visit the historic cellars in the past half century say they can still sense the spirits that once occupied the extraordinary space. If you squint hard enough, they claim you can make out a final homage to the cellars' past imprinted in the 1930s on the crumbling wall: "Legend of Oechs Cellars: These cellars were built in 1876, about seven years prior to the official opening of the Brooklyn Bridge in 1883. From their inception, they housed the choicest wines in New York City."