Accessibility links
Fact Or Fiction? Even When It Comes To Food, It's Hard To Tell With Rasputin : The Salt Worshipful female followers fought for the Mad Monk's leftover bread crusts. His infamous sweet tooth led to his death. Or did it? A century later, rumors about Russia's czarina whisperer still swirl. 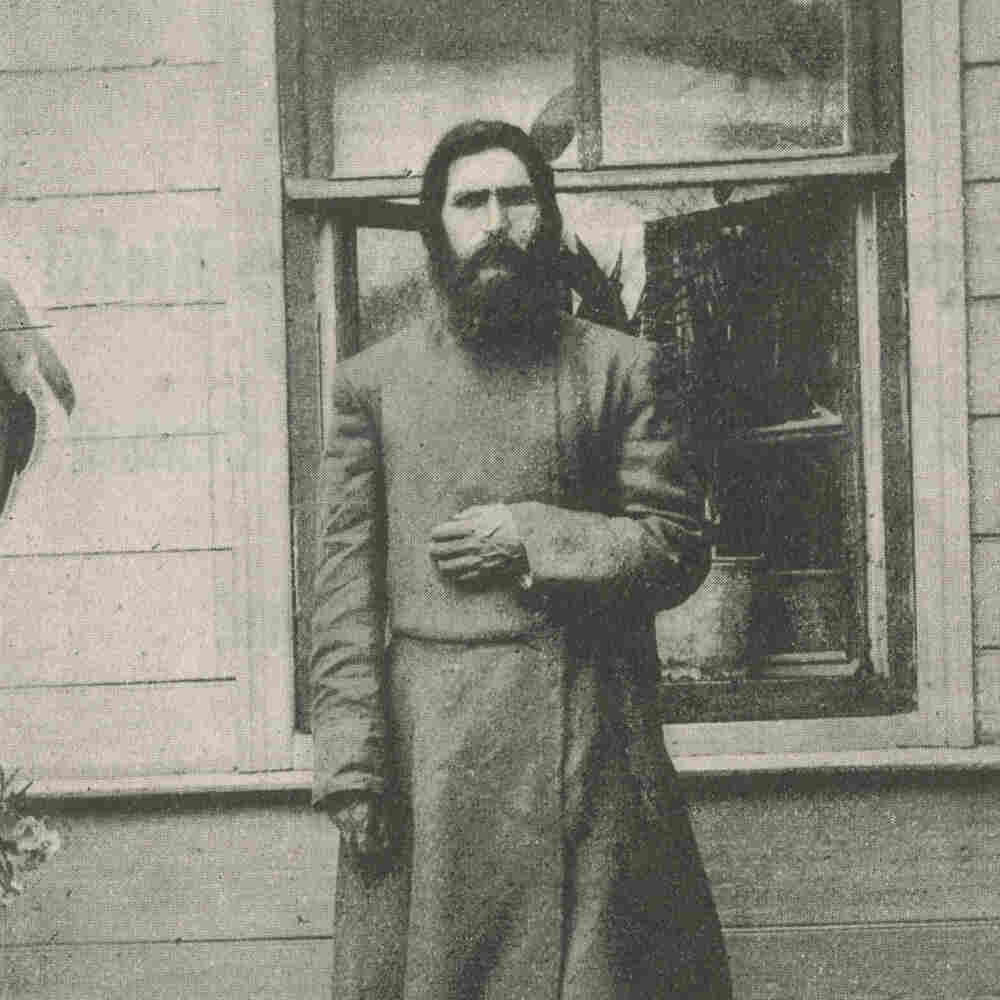 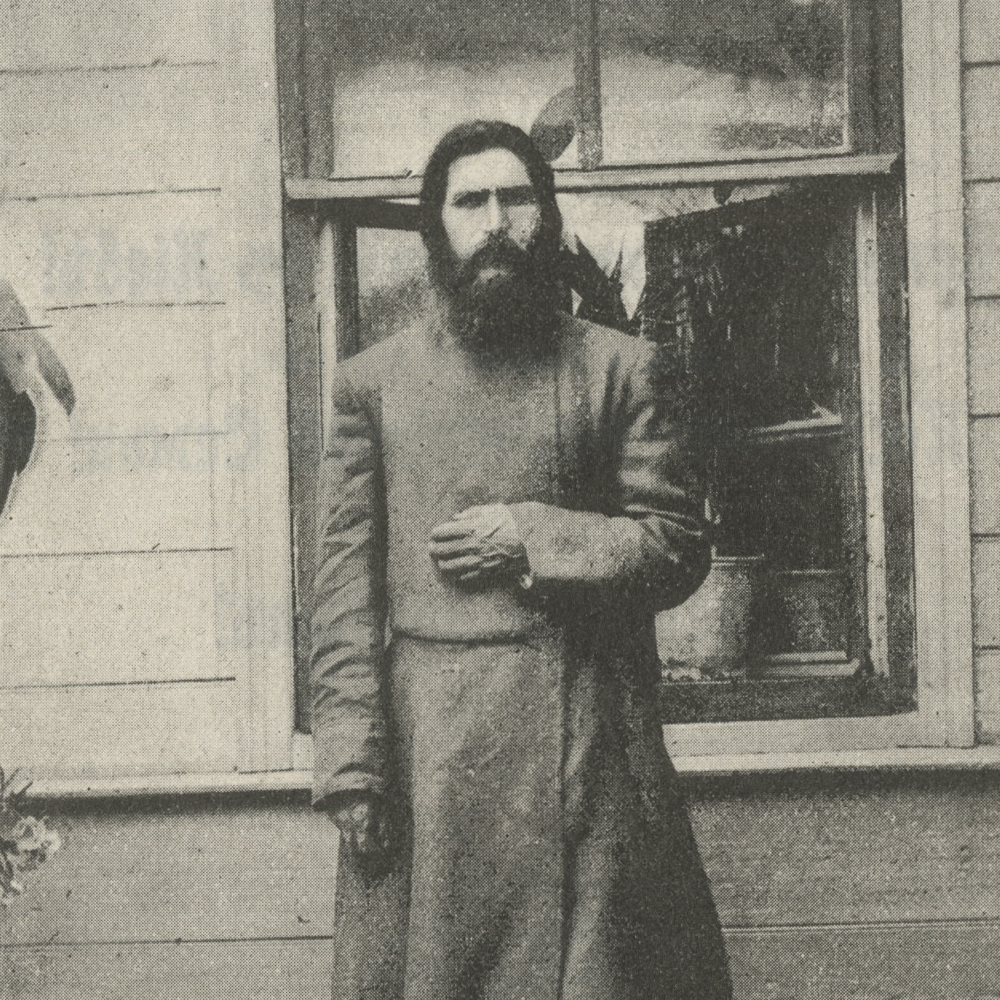 RGALI/Courtesy of Farrar, Straus and Giroux

But was he really?

The answer is, we will never know. The life of Grigori Rasputin, the Siberian peasant who, through a charismatic combination of spiritual and sexual power, rose to become chief mentor to Alexandra, the last czarina of Russia, is such a thick borscht of fact and fiction that it's hard to distinguish the truth from the lies.

But historian Douglas Smith, in his magnificently researched new book, Rasputin: Faith, Power and the Twilight of the Romanovs, attempts to do precisely that. It's a herculean task, for as we soon learn, even when it comes to something as seemingly uncontroversial as food, there are competing versions of the truth.

Did Rasputin have a sweet tooth? Was he a glutton who feasted on champagne, ice-cream, expensive fish, and caviar? Did he really lick his fingers at the dinner table and hold them out for the grand dames of Saint Petersburg's salons to kiss?

As Rasputin's notoriety spread and his hold over the lonely and impressionable empress tightened – she fervently believed he could soothe and protect her hemophilic son and heir to the throne, Alexei – whispers about him being a wicked, orgiastic cultist began to grow, as did his list of enemies. It was put about that the rube who once slurped on cabbage soup and raw garlic now glutted himself on the finest fruit, fish, caviar and champagne. It turns out that while Rasputin's love of fresh fruit – oranges, strawberries – was real enough, the rest of the menu was made up. 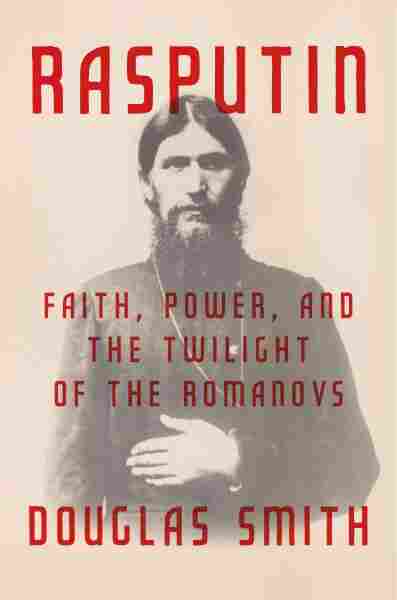 Faith, Power, and the Twilight of the Romanovs

"He did not eat too much or rich, heavy foods," says Smith. "He kept a simple table. It may have at times been loaded with fancy foods and drink, but these were gifts from admirers and petitioners trying to curry favor. He liked ukha —fish soup — and dark bread, radishes, onions and other plain vegetables. He drank tea, like nearly every Russian. Also, note that Rasputin never became fat or really even portly. His body remained trim his whole life."

His table manners, it is true, were alarming. His beard was flecked with food, he licked the spoon before using it to serve others, tore the bread and fish apart with his fingers and wiped them on the table cloth. Some were revolted by his crudeness, others saw it as part of his charm, and it's quite possible that he exaggerated his gaucherie to set himself apart from the effete and mannered aristocracy. He cast such a spell on his worshipful female followers that they were known to kiss his freshly licked fingers, and vie for the leftover crusts of bread on his plate.

It was Rasputin's rootedness, however, that made him sensitive to the hunger pangs of ordinary Russians. He immediately recognized that the serpentine bread lines in Saint Petersburg – the food transportation system had broken down as a result of the First World War – were dangerous and contained the seeds of revolution. 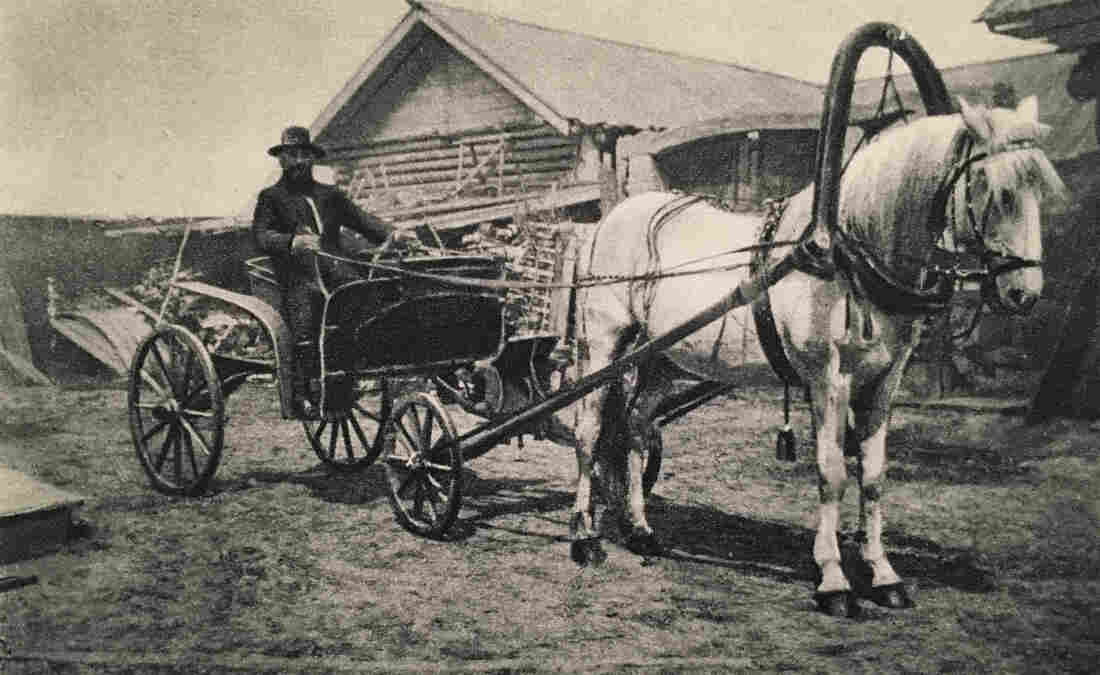 Rasputin driving his carriage. Of peasant stock himself, this close adviser to the czarina immediately recognized that the serpentine bread lines in Saint Petersburg, Russia, were dangerous and contained the seeds of revolution. His warnings went unheeded. Fülöp-Miller/Courtesy of Farrar, Straus and Giroux hide caption

Genuinely stricken to learn that corn was rotting in the imperial warehouses while the people starved, he sent telegrams to Czar Nicholas II, who was away fighting the Germans on the front line, begging him to increase food supplies. But Nicholas – despite Rasputin's missives, the labor strikes, the 300 percent inflation, and simmering anger in Moscow and Petrograd (the city 's new name that replaced the German-sounding Saint Petersburg) – did nothing.

Rasputin tried to get Alexandra to distribute food in the streets to show that she felt the people's pain, and though she seemed agreeable, it never happened. He even wrote to senior government officials appealing for action – short, unpunctuated notes that testify to the sincerity of his pleas:

"His notes were often scribbled and hard to decipher. His grammar and spelling were atrocious. His meaning was often hard to make out," says Smith. "But yes, Rasputin was very serious about the food problems in Petrograd. The czar did not heed his advice, regrettably."

It was Rasputin's rootedness, however, that made him sensitive to the hunger pangs of ordinary Russians.

Rasputin proved fatally prophetic. The February 1917 Russian Revolution was ignited by food riots, when hungry marchers stormed the legendary Filipov Bakery, whose delectable black breads, piroshky, kopeck buns, and chocolate cakes were daily delivered to the czar's palace. The Cossacks, called out to quell the riot, refused to open fire. A petulant Alexandra, sounding like Marie Antoinette, relayed it all in a letter to her husband: "They smashed Filipov's bakery completely. ... A hooligan movement, young boys and girls running about and screaming that they have no bread, only to excite..."

By then, Rasputin, whom Alexandra lovingly called "our dear Friend," had been dead for two months -- murdered in the early hours of Dec. 30, 1916 (Dec. 17, according to the Russian calendar then in use).

Which brings us to his sweet tooth. This portrait of Rasputin, looking very much like a Mad Monk, was painted by Alexander Raevsky and commissioned by a female acolyte. Exhibited at the Academy of Fine Arts in 1912, the portrait was lost during the Russian Revolution, but photographs survived. Courtesy of Farrar, Straus and Giroux hide caption 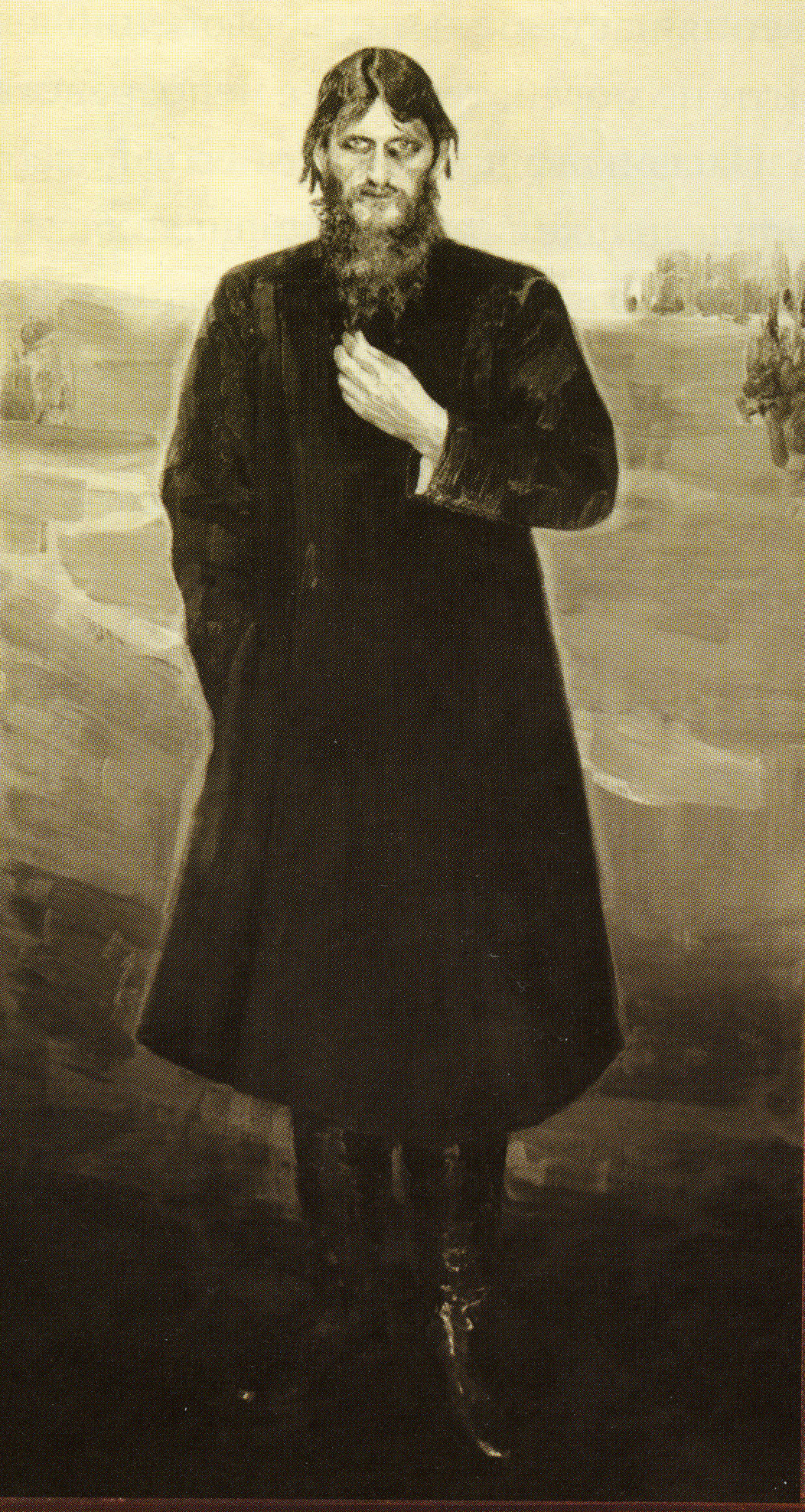 This portrait of Rasputin, looking very much like a Mad Monk, was painted by Alexander Raevsky and commissioned by a female acolyte. Exhibited at the Academy of Fine Arts in 1912, the portrait was lost during the Russian Revolution, but photographs survived.

Several biographies state that Rasputin was exceedingly fond of sugar – with one even citing his black teeth as proof. But his daughter Maria flatly states that her father disliked sweets. A trivial point of discrepancy — except that it has a bearing on how he died. The standard version is that Rasputin's murderers, a group of monarchists led by Prince Yusupov, knowing of his supposed weakness for sweets, laced cakes and wine with cyanide and served them to him, and, when he miraculously survived the poison, shot him dead.

So whom do we believe? Smith is unequivocal. "I believe his daughter," he says. "The stories that he loved sweets come from less-than-reliable sources. Black teeth? Hard to say. I've never seen a single photograph of him with his mouth open. The love of sweets belongs, I would say, to the realm of myth."

And while it's true that the 48-year-old Rasputin was lured to a cellar and served cake and wine on his last night (perhaps Yusupov & Co. bought into the sweet-tooth myth as well) while Yankee Doodle played on the gramophone, neither contained any poison. The autopsy report said as much.

"As I write in the book, either no poison (real or fake) was used, or it was substituted for something else — maybe ground-up aspirin," says Smith. "The entire description of the murder, which comes to us from the memoirs of Prince Yusupov, is highly unreliable, if entertaining."

Rasputin's excessive fondness for Madeira is undisputed. "Go on, drink, God will forgive you," he would urge his dinner companions. "I love wine," he declared in 1916, by which time he had become a functioning alcoholic.

His daughter Maria, while admitting that her father's drinking was out of control, said he was far from a typical booze-hard. "She noticed," writes Smith, "how he never spoke so beautifully about God as when he was drunk."

Nor dance so well. After a few glasses, Rasputin was known to leap to his feet in his tall, patent leather boots and dance with ecstatic abandon to the music of three minstrel gypsies who accompanied him to his evening parties.

What comes as a surprise then, is to learn that the Madeira Monk supported the temperance movement, speaking out against the scourge of vodka and endorsing the Sobriety Society in his village. Smith spotlights this paradoxical nugget:

"I would not say I'm the first to write about this, but no previous biographer has explored it in such depth," he says. "It is a definite puzzle, given his own troubles with the bottle in his latter years. I'm still not fully certain how much of the press coverage about his support for the temperance movement was genuine or 'fake news.' It's difficult to say for certain."

Smith's comprehensive biography portrays an intriguingly multifaceted figure who enjoyed power and had a seductive vitality, but who was also an earthy and compassionate family man. It's a far cry from the demonic Rasputin of the irresistibly catchy 1978 Boney-M song, with its fantastical claim that Ra-Ra Rasputin was a "lover of the Russian queen" and "Russia's greatest love machine." The former is salacious gossip. The latter is hard to prove, but in the succinct words of another historian, Robert K. Massie, "He would send out for prostitutes late at night as people might send out for pizza."

Read an excerpt of Rasputin