Accessibility links
Bunny Chow: South Africa's Sweet-Sounding Dish Has A Not-So-Sweet Past : The Salt The country's street-food staple is a fusion meal that has nothing to do with rabbits, and everything to do with the rise of immigrant Indian workers in the 19th century and the era of apartheid.

Bunny Chow: South Africa's Sweet-Sounding Dish Has A Not-So-Sweet Past

Bunny Chow: South Africa's Sweet-Sounding Dish Has A Not-So-Sweet Past 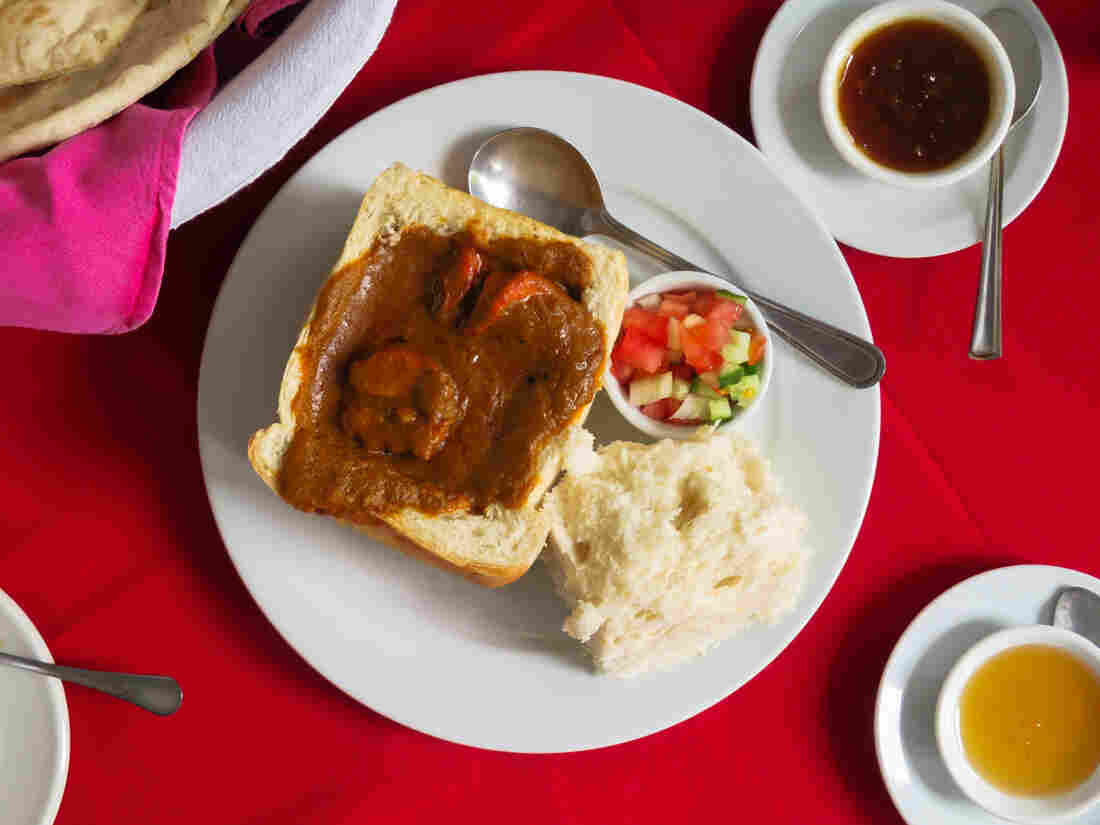 Indian Oven's bunny chow features shrimp with a side of tomatoes and cucumbers. The restaurant is located in Hout Bay, a suburb of Cape Town. Alan Greenblatt for NPR hide caption 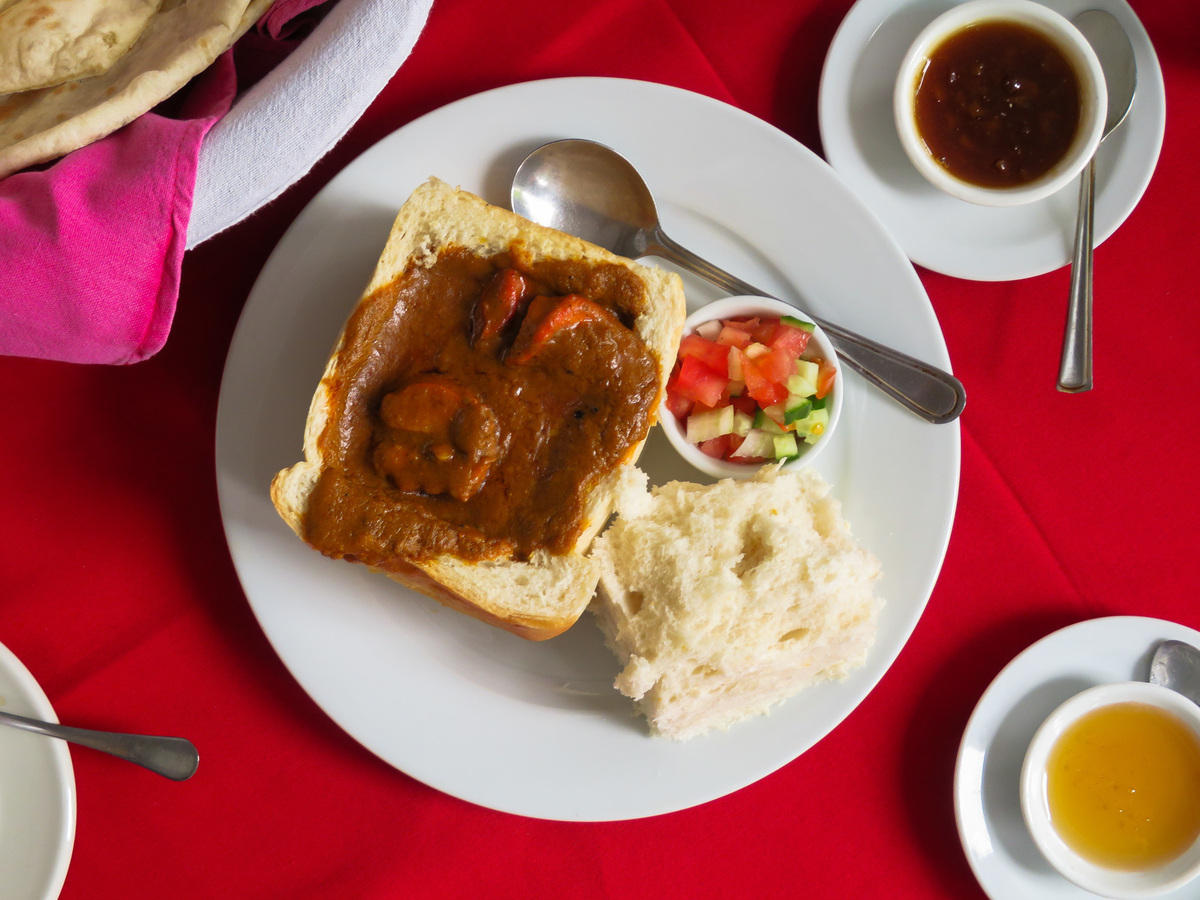 Indian Oven's bunny chow features shrimp with a side of tomatoes and cucumbers. The restaurant is located in Hout Bay, a suburb of Cape Town.

It's an Indian dish you're unlikely to find in India.

Bunny chow is essentially a kind of bread bowl. You take a loaf of white bread, hollow out the middle and fill it with a curry, either vegetarian beans or some type of meat.

But not rabbit. The name "bunny" comes from the corruption of an Indian term referring to merchants. The dish has its origins in Durban, South Africa's third-largest city.

"It's not known by Indian communities outside of South Africa," says Rajend Mesthrie, a linguist at the University of Cape Town who has looked into its history.

There are only a handful of places in the U.S. where you can order bunny chow. It's a decades-old dish that remains best known in its hometown.

But bunny chow is classic fusion cuisine, in the sense that it resulted in the meeting of two disparate cultures — if not necessarily a happy meeting.

There are many stories about how bunny chow originated, but the one cited most often describes it as a totally portable dish served up to black people under apartheid, South Africa's 20th century system of racial separation.

"Bunny chow started as a way of selling food to black people who weren't allowed to eat in certain restaurants during apartheid," says Ameera Patel, a novelist who lives in Johannesburg. "The bread was used as a holder, or a plate, so that nothing needed to be returned after eating."

Indians started coming to South Africa in large numbers during the 19th century. At first, starting in the 1860s, Indians were brought as indentured servants to work in the sugar cane fields around Durban. They were followed soon after by "passenger Indians," so-called because they paid their own way, coming to work as artisans or merchants. 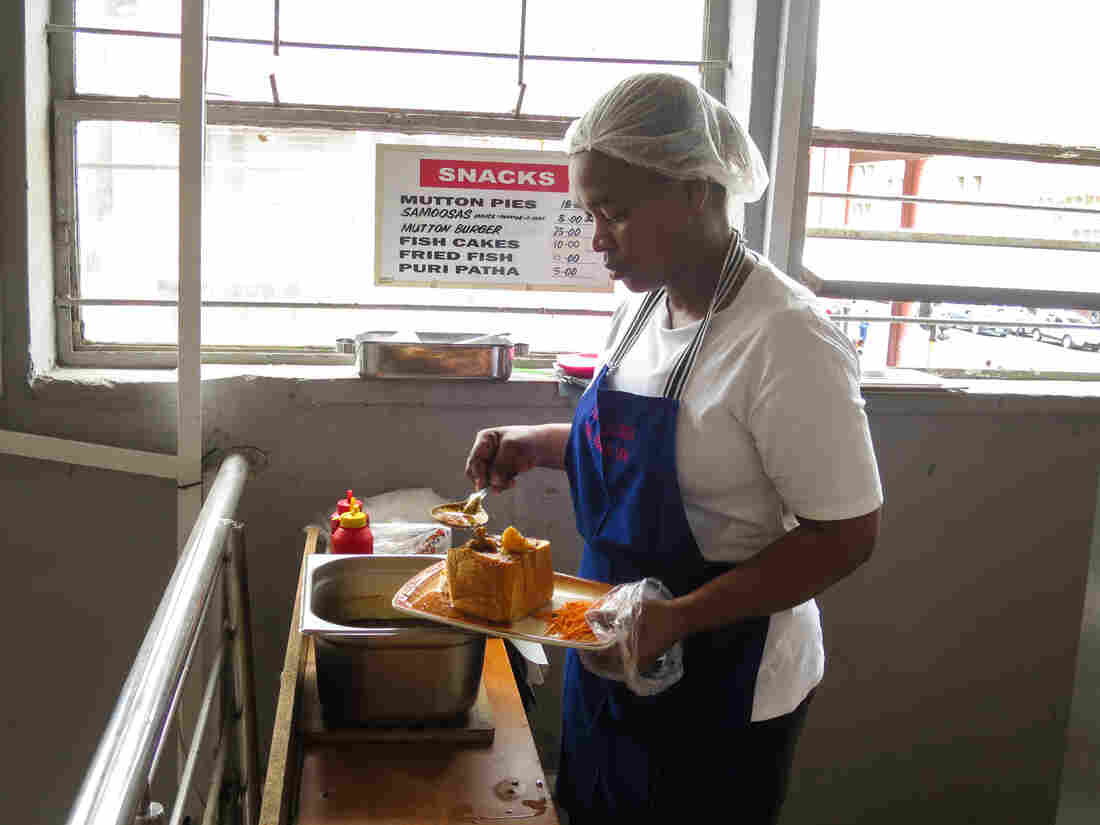 Server Olgah Hlophe scoops some mutton curry into a hollowed-out loaf of bread to make a bunny at the Victory Lounge in Durban. Alan Greenblatt for NPR hide caption 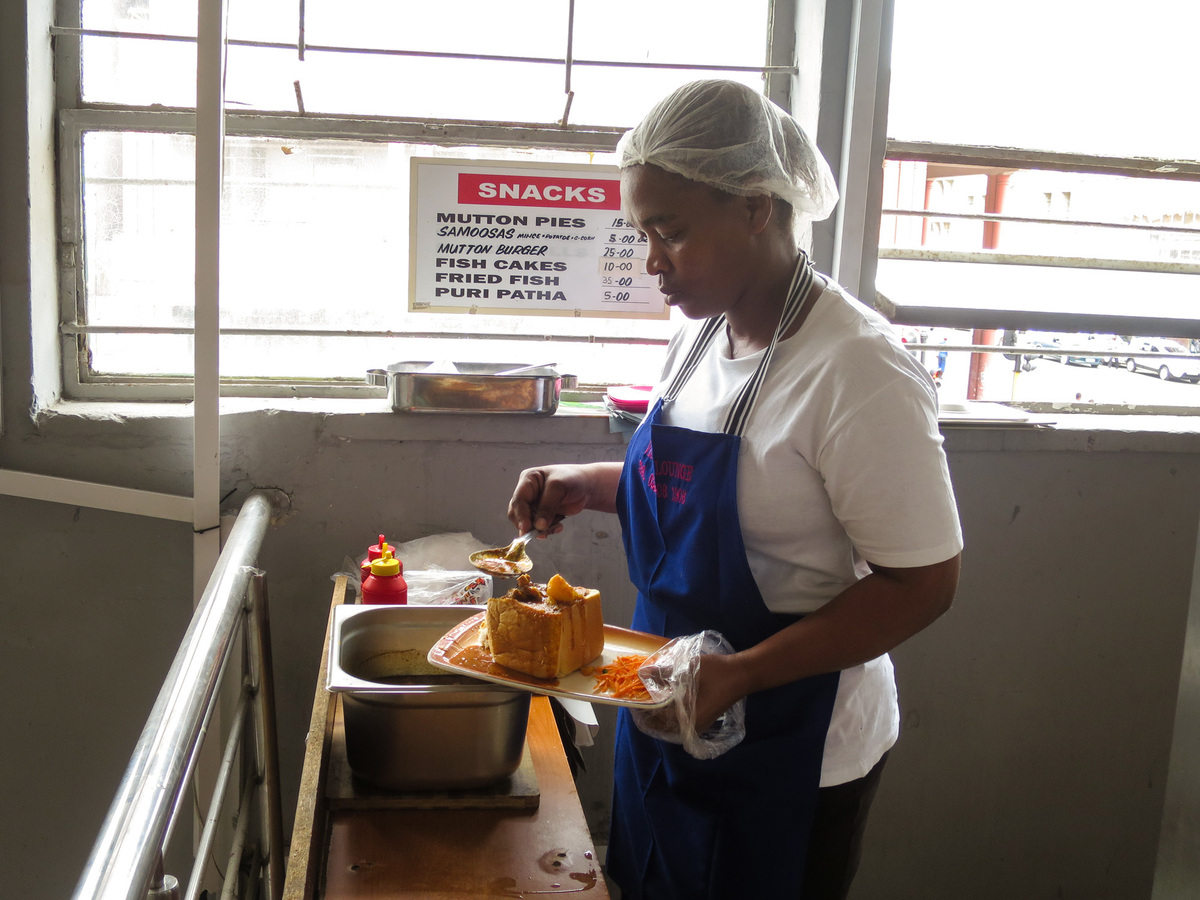 Server Olgah Hlophe scoops some mutton curry into a hollowed-out loaf of bread to make a bunny at the Victory Lounge in Durban.

In those days, Indian cooks couldn't find all the ingredients they used at home. The spice mix in a Durban curry remains distinct from what you'd come across in Delhi. And South African Indians made do with white bread flour as a substitute for chickpea or rice flour.

In Imraan Coovadia's novel, The Wedding, the not-so-happy couple practically subsists on bunny chow after arriving in Durban in the 19th century. But Mesthrie and other scholars suggest that the dish was most likely created many years later, probably after World War II. "I had no idea of the history of it," Coovadia concedes. "It was part of the Durban life I knew growing up."

Coovadia notes that the vast array of Indian cultures and castes were flattened upon arrival in South Africa. There, everyone became just Indian. The term "bania" came from the Sanskrit word for merchant. "From the 'bania man shop' came the 'bunny man shop,' and from bunny man shop came the bunny chow," says Dilip Soni, a jewelry maker in Durban.

Soni says the story he heard growing up was that beggars would come at the end of the day to ask for leftover food. The cooks didn't have time to make them sandwiches, so they would dig out some bread and fill it with curry. Billy Mowbray, whose father opened the Victory Lounge in Durban in 1948, confirms that account.

The more commonly told story, however, involves apartheid. The system, which was formally put in place in 1948 and ended a quarter-century ago, not only separated black and white people, but also Indians and "colored" people (still the term used for mixed-race individuals in South Africa today).

Every major city in South Africa has its "suitcase sandwich," some overstuffed creation that's a meal put between slices of bread, such as the Gatsby in Cape Town or kota in Johannesburg. The very term kota suggests a link to bunny chow, Mesthrie says, because it's a corruption of "quarter." Bunnies are generally ordered by size, such as a quarter loaf or half loaf. You would say "quarter mutton" to order a quarter loaf of bread filled with lamb.

"There's a whole range of all this food, a quarter loaf of bread dug out and filled with chips and bologna or all sorts of combinations," says Panashe Chigumadzi, a Zimbabwean novelist and essayist who lives in South Africa.

She notes that these dishes speak to the degradation of the black diet under apartheid, with the cheapest cuts, such as chicken feet and sheep's heads, morphing over time into delicacies. "This is a heart attack in a quarter loaf of bread," Chigumadzi says.

Mowbray says most of his black customers don't order bunnies because they're too expensive, even though, by American standards, they're a huge bargain. (A mixed veg or sugar bean bunny sells for 15 rand at the Victory Lounge, which is about $1.10, while the braised mutton goes for 48 rand, or about $3.50.)

"The black regular workers around here, it's quite pricey for them," Mowbray says. "They get a quarter (loaf of) bread and butter in the center, with a cup of tea. That's fine for them." Black workers subsisting on bread and soda for many meals are common all over the country.

Even today, Coovadia says, there's something transgressive about white people ordering once-insistently black or Indian bunny chows. "It's an exotic eating adventure," Coovadia says. "If you're respectable, you definitely don't eat with your hands."

Theoretically, it's possible to eat a bunny chow with a knife and fork, but that's like a New Yorker eating a slice of pizza using utensils.

There's an ad that's been airing on Lotus FM, an Indian station in Durban, in which a couple argues about whether it's ever OK to eat a bunny with a knife and fork. "No, not each one to his own!" the man insists, arguing that some things are just beyond the pale. The ad turns out to be a public service announcement, noting that violence against women and children is also entirely unacceptable.

Eating a bunny, with the sides of white bread growing increasingly soggy, can quickly turn messy. Zane Drew, one of the owners of Amawele's South African Kitchen in San Francisco, worried about trying to sell bunny chows to his downtown food court clientele when the shop opened three years ago.

"You've got to eat bunny chow with your hands," he says. "This is the financial district and everyone is wearing suits and all that."

In South Africa, curries are contained within the bread loaf. At Amawele, the meat and sauce are served overflowing the sides. Nevertheless, it's become a popular item.

On a recent Friday afternoon, customers ordering it ranged from Americans who'd never heard of it before but found it intriguing on the picture menu board, to a young woman from South Africa who's been living in San Francisco as a nanny and was overjoyed to be encountering her first bunny in a year.

"It blew up, bigger than we expected," Drew says. "Way bigger. I'm really proud it's selling the way it does."