Accessibility links
The Long, Slow Trek To Get Americans To Eat Camel Meat : The Salt In Somalia, camels are prized for their nutritious milk and meat. In Australia, they're environmental pests. So more Somali-American chefs are offering meat sourced from the outback on their menus.

The Long, Slow Trek To Get Americans To Eat Camel Meat

The Long, Slow Trek To Get Americans To Eat Camel Meat 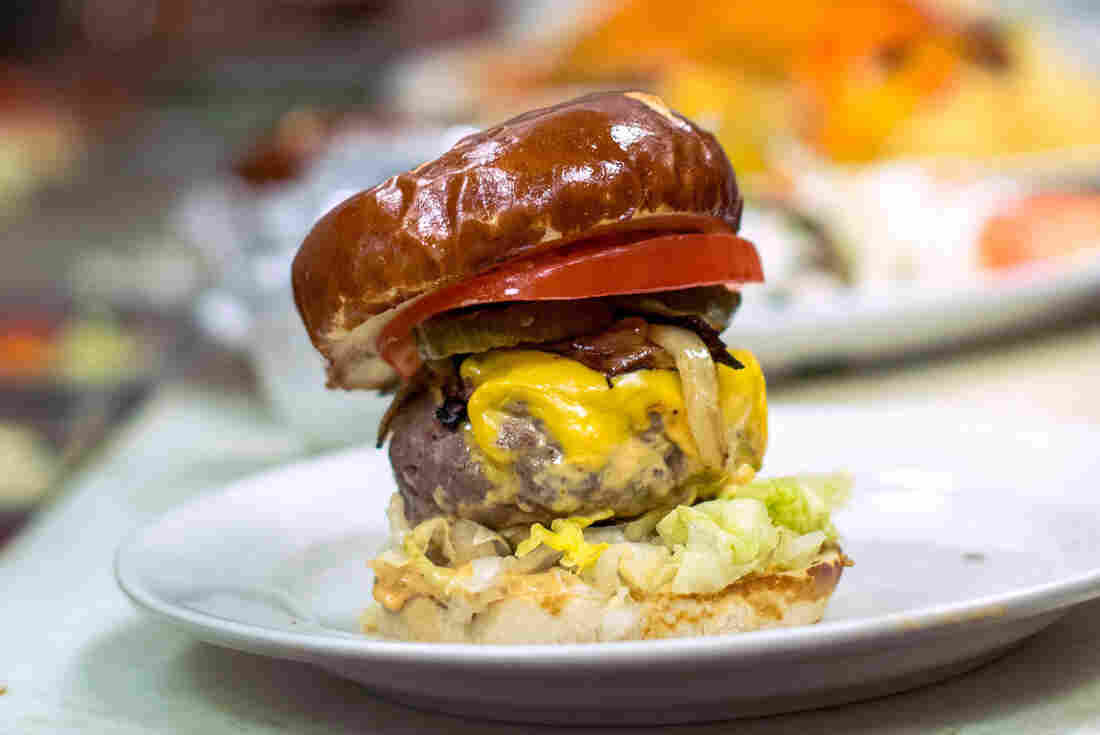 At first, the camel burger that restaurateur Jamal Hashi spent months trying to perfect didn't sell well. By choosing a different cut of meat, however, he discovered the potential for the burger. Tom Baker for NPR hide caption 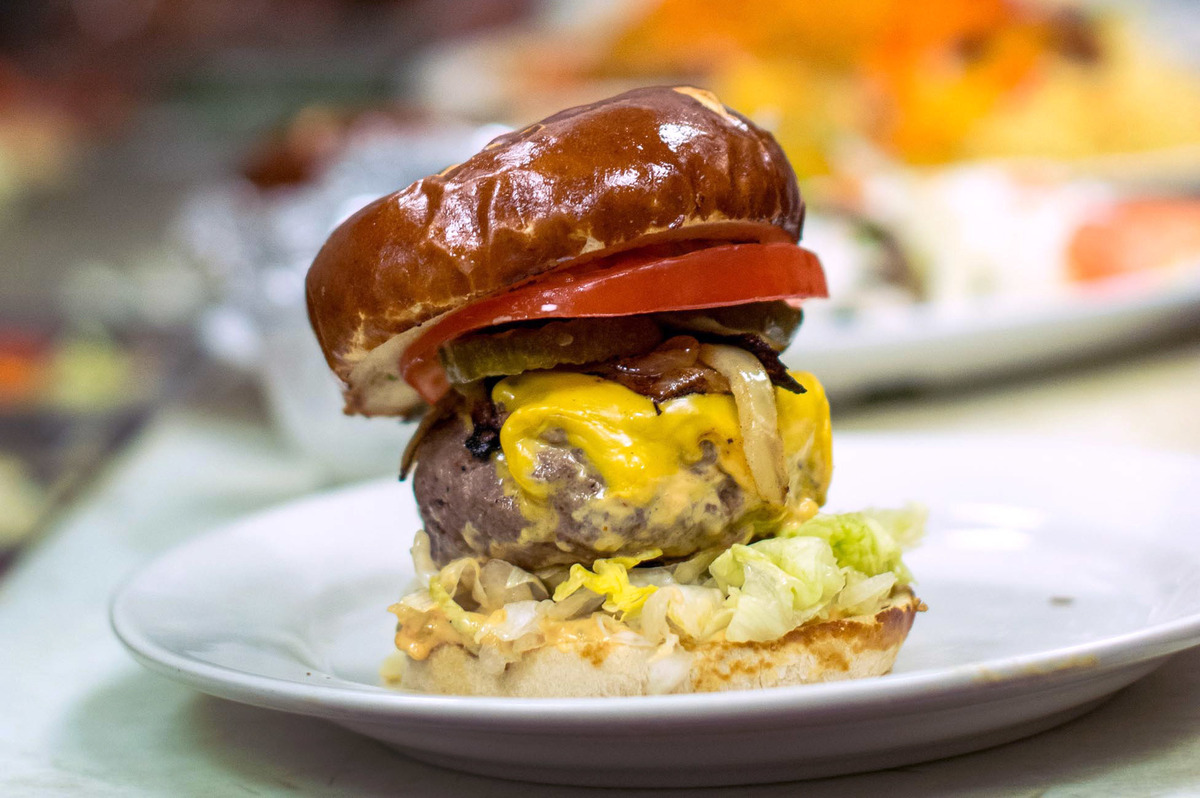 At first, the camel burger that restaurateur Jamal Hashi spent months trying to perfect didn't sell well. By choosing a different cut of meat, however, he discovered the potential for the burger.

The first time Somali-American chef Jamal Hashi put camel meat on his menu in Minneapolis, it didn't go well. He tried grinding it into a burger and using chunks of it in a spicy stew, but no matter, the texture was bad and the sales were worse. "It was like chewing on a patty of rubber bands," he said of the burger.

At its best, camel meat tastes much like lean beef. But certain cuts can be tough, and if the meat comes from an old camel, it can also taste gamey. Hashi had used a shoulder cut, and neither he nor his customers were happy with the results.

Camels may first have been domesticated in the region around Somalia, where they have long been prized for their nutritious milk and meat, and as a mode of transport in the arid environment. "We are a people who constantly travel," says Hashi. "This is our livestock."

Which is why Hashi wanted to bring the humped-beast's meat to Minneapolis, home to the largest population of Somalis in America. So, four years later, he tried again — in 2010. At the time, Hashi owned Safari Express, an East African grill at Minneapolis' Midtown Global Market. But it was when he applied for a booth at the Minnesota State Fair — a place famous for crazy creations like Spam sushi and deep-fried Snickers — that Hashi thought to reintroduce the traditional "meat of kings" to an American audience. When the fair gave him the green light, Hashi purchased two tons of wild camel from R.W. Meats, a Minnesota-based halal importer and a leading distributor of camel meat in America.

This time, Hashi served the camel doner-kebab style: a skewer of spiced, ground meat mixed with egg and breadcrumbs. It was a hit. He sold out of camel meat in four days. Soon after, he started offering the "The Hashi Burger" at Safari Express, and began ordering a pallet of meat every few months — each of which arrived from, of all places, central Australia.

To understand how Australia became the world's No. 1 source for camel meat — soothing the culinary homesickness of thousands of Somalis in Minnesota along the way — you have to understand why camels are a problem in the outback: They're totally feral, and have caused huge headaches.

In the mid-1800s, the British introduced one-humped Arabian camels from Pakistan and India to help with transport across the vast, arid landscape of Australia. The animals proved hardy and reliable, but with the arrival of the railroad in the early 20th century, the camels became obsolete and were freed. Unchecked by predators, their population swelled. 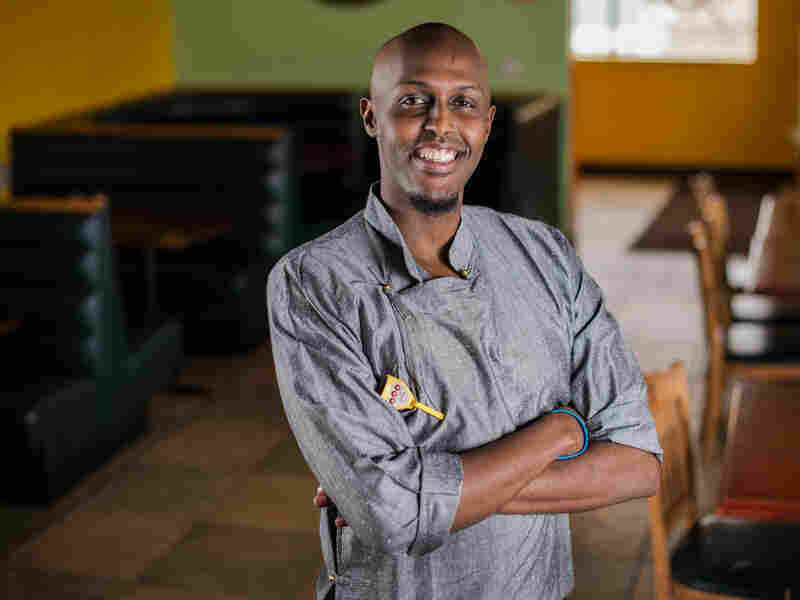 Restaurateur Jamal Hashi, who fled to the U.S. with his family during Somalia's civil war, takes pride in bringing the feeling of home to Somali-Americans in Minnesota, which has the largest population of Somalis in America. Tom Baker for NPR hide caption 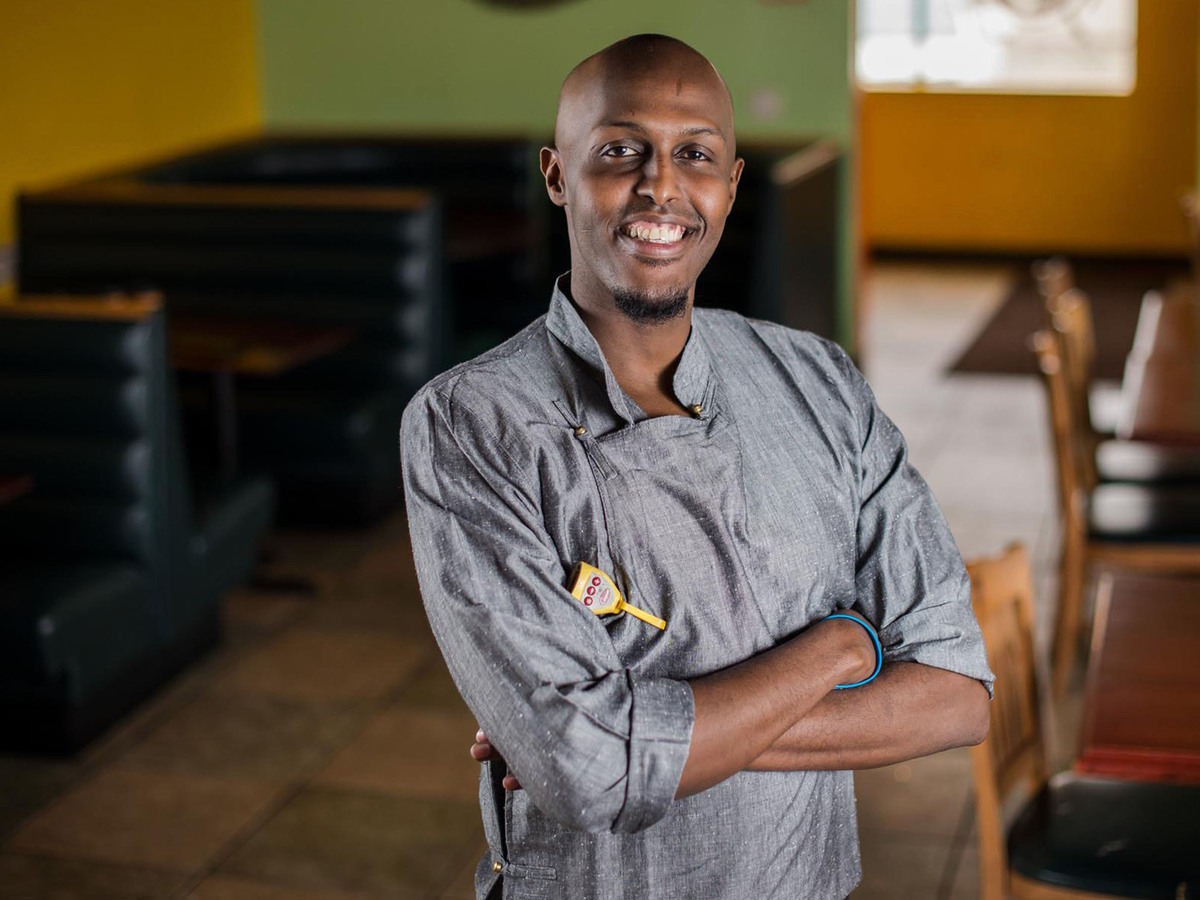 Restaurateur Jamal Hashi, who fled to the U.S. with his family during Somalia's civil war, takes pride in bringing the feeling of home to Somali-Americans in Minnesota, which has the largest population of Somalis in America.

"By the late 1990s, it had become obvious that something had to be done," says Quentin Hart, former manager of the Australian government's Feral Camel Management Project (AFCMP).

Though camels tend to roam in small groups, they congregate en masse to look for water during dry spells. That notion of camels storing water in their humps? Not true. The humps store fat, and while this is a good source of energy for trekking across arid landscapes, Hart says it is "a bit of a myth" that camels can survive for a long time in extreme conditions. Like any animal, they get thirsty. And when they get thirsty, they get desperate.

In 2009, 6,000 thirsty camels stormed the outback town of Docker River, population 350. The creatures, each of which can weigh a thousand pounds or more, butted into water tanks, tore faucets from walls, overran the town's airstrip and stranded terrified residents in their homes.

A study found that camels also did a great deal of damage to the region's biodiversity and environment, trampling vegetation and stunting plant regeneration. And when they died in or near water sources, their carcasses fouled drinking water for Aboriginal communities.

A few months before the Docker River stampede, the Australian government put up the equivalent of about $15.5 million to launch the AFCMP, a four-year effort to manage more than a half-million camels loose in the countryside. With helicopters and marksmen, Australia culled some 135,000 camels between 2009 and 2013, and processed another 15,000 for human consumption. The meat camels were slaughtered according to halal standards, then shipped to places like Dubai, home to camel hot dogs and the world's first camel-milk chocolate company, and Minnesota.

Still, wrangling wild camels in remote areas isn't easy, and it continues to frustrate both suppliers and buyers today. The central question, according to Hart, is whether the quantity and quality of the wild meat is reliable.

To ensure the stability of camel commerce in the long-term, he believes the animals would have to be domesticated. But with no strong incentive for cattle ranchers to pursue camel meat — in Australia, it fetches a market price comparable to beef but costs more to produce — a farmed future seems far off, says Hart.

That said, eating feral camels does have environmental benefits. It's in line with researchers who urge a "pestatarian" diet — eating animals that are environmental pests — as a sustainable alternative to a diet of mainstream meat. And it's one arguably more palatable than eating insects or lab-grown burgers. Wild game is free of antibiotics and growth hormones, and tends to be leaner than its farmed relatives.

Before Hashi and his family fled Somalia at the start of the civil war in the 1990s, he grew up in the capital of Mogadishu and spent summers in a nomad town just north of the city. He remembers drinking lots of camel milk, which is low in fat and full of Vitamin C, and eating camel meat, which is low in saturated fat and high in protein. Hashi plans to highlight the meat — using camel trim, a tender cut from below the camel's hump — in adobo-chipotle camel sliders at his newest Minneapolis restaurant, which is slated to open in late February. 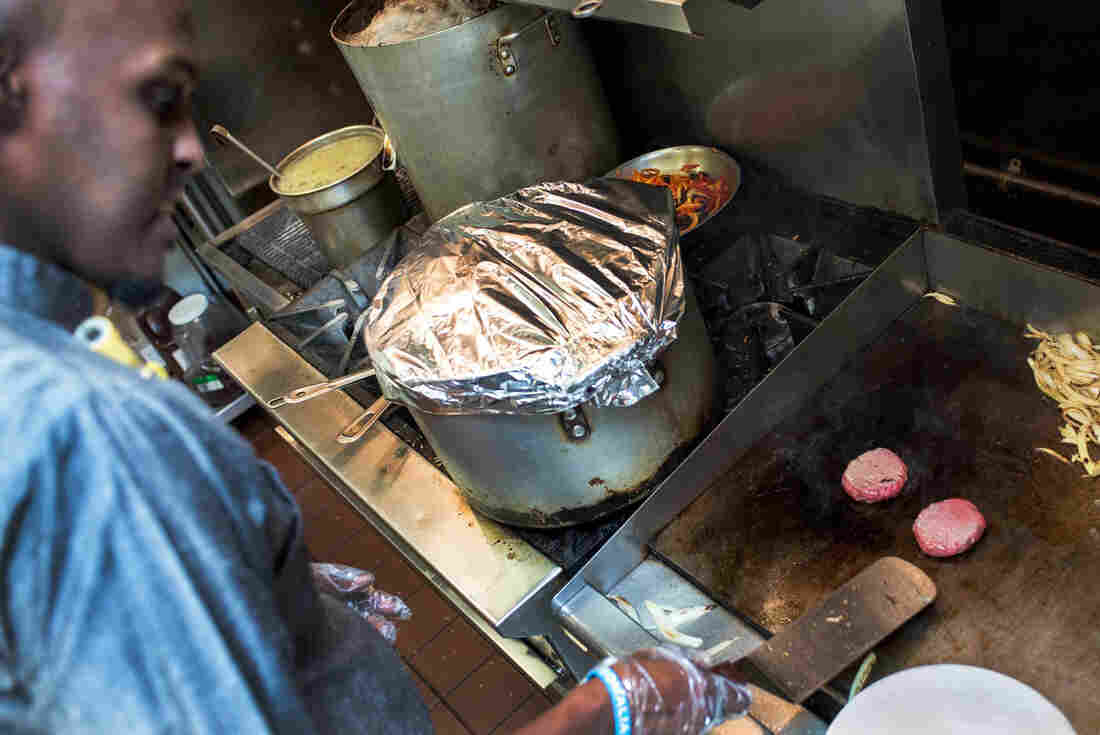 Hashi cooks camel meat during a demonstration at Safari Restaurant. He will be offering camel sliders at his newest Minneapolis restaurant, set to open in late February. Tom Baker for NPR hide caption 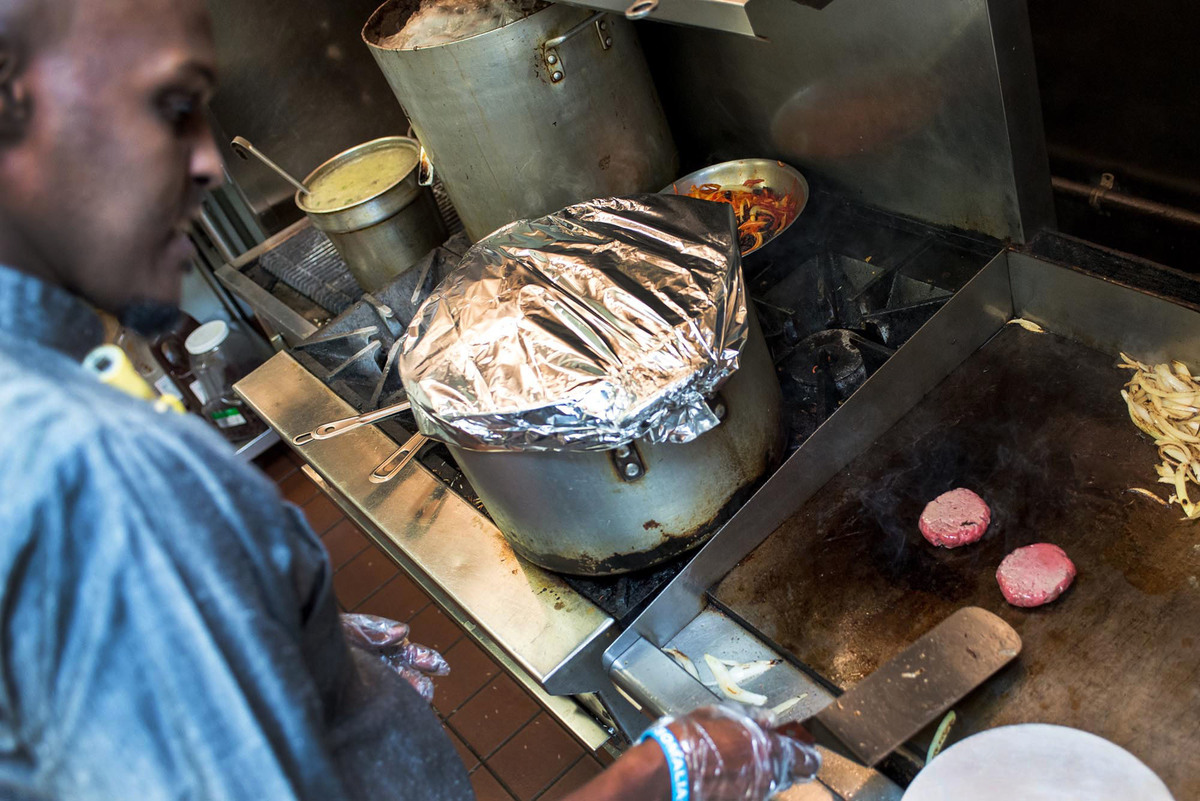 Hashi cooks camel meat during a demonstration at Safari Restaurant. He will be offering camel sliders at his newest Minneapolis restaurant, set to open in late February.

Many Somalis in Minneapolis treat camel as they would back home: as a celebration food. Randy Weinstein, owner of R.W. Meats, says many of his clients place two orders a week: the first for goat and beef, and the second with the addition of camel, to serve at weekend weddings and other events.

Weinstein started importing camel about 15 years ago, after Somali retailers in the Twin Cities expressed a longing for the taste of home. Now his wife calls him the "camel king," and he is expanding his inventory to include pre-ground camel meat. The majority of his sales are to halal shops and restaurants in areas where the Somali population is growing, such as Portland, Maine, or Seattle. Weinstein believes that Somali chefs in those places could bring camel to a larger audience.

"The challenge is getting mainstream America to open their eyes to this product," says Weinstein. But he has faith this will happen in the next few years, as East African dishes become more common in America's food scene.

At Safari Express, which is now owned by one of Hashi's brothers, the camel burger isn't cheap — it costs $13.50 with a drink and fries — but Jamal Mohamed, a cashier, says it is still the best-selling item, typically selling about 40 a week. Garnished with grilled pineapple, peppers, onions and a generous dousing of creamy "secret sauce," the one-pound patty is soft and juicy and tastes a lot like beef.

Anastasia Flemming, a frequent customer at Safari Express, hasn't ordered the burger, but says she's been converted after having a bite of her friend's. "I'd come back for it," she says.

Erica Berry is a writer based in Minneapolis. Find her online at @ericajberry.

This story was produced in collaboration with the Food & Environment Reporting Network (FERN), a non-profit investigative journalism organization.