Accessibility links
Millets, Grains That Might Help Indian Farmers Fight Drought – And Improve Diets, Too : The Salt Once a staple in India, millets have fallen out of fashion in recent years. Now, faced with water shortages, one Indian state is re-introducing these drought tolerant cereals to people's diets.

A Forgotten Group Of Grains Might Help Indian Farmers – And Improve Diets, Too

A Forgotten Group Of Grains Might Help Indian Farmers – And Improve Diets, Too 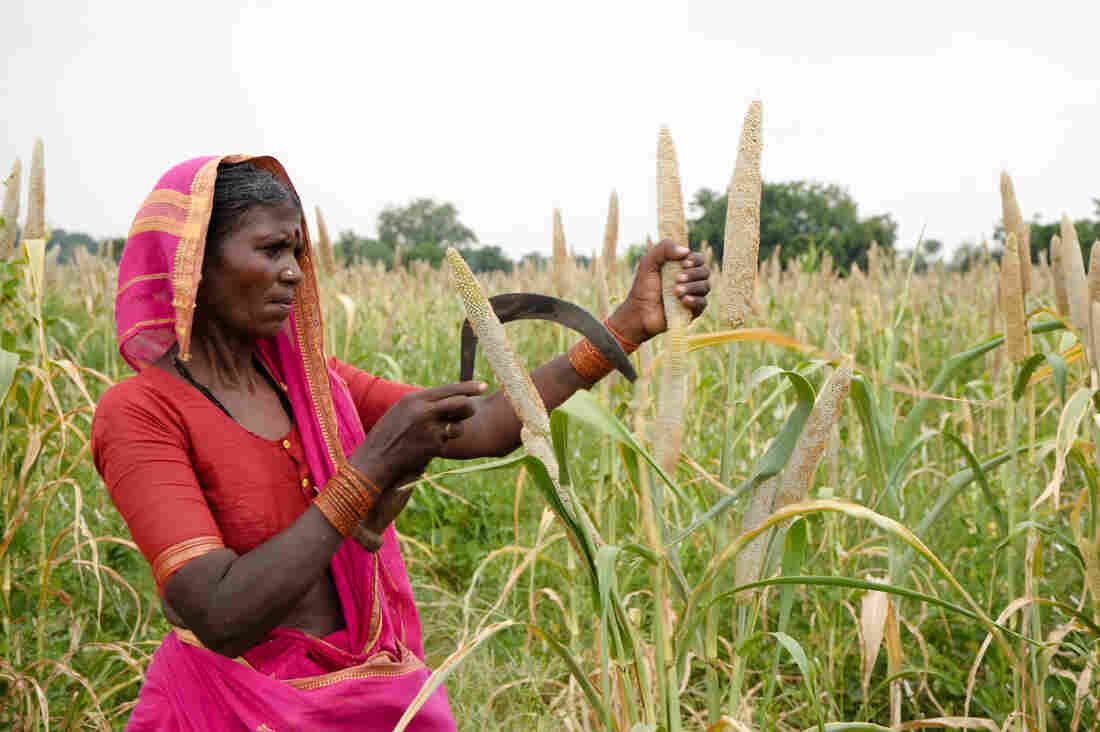 A woman farmers harvests pearl millet in Andhra Pradesh, India. Millets were once a steady part of Indians' diets until the Green Revolution, which encouraged farmers to grow wheat and rice. Now, the grains are slowly making a comeback. Courtesy of L.Vidyasagar hide caption 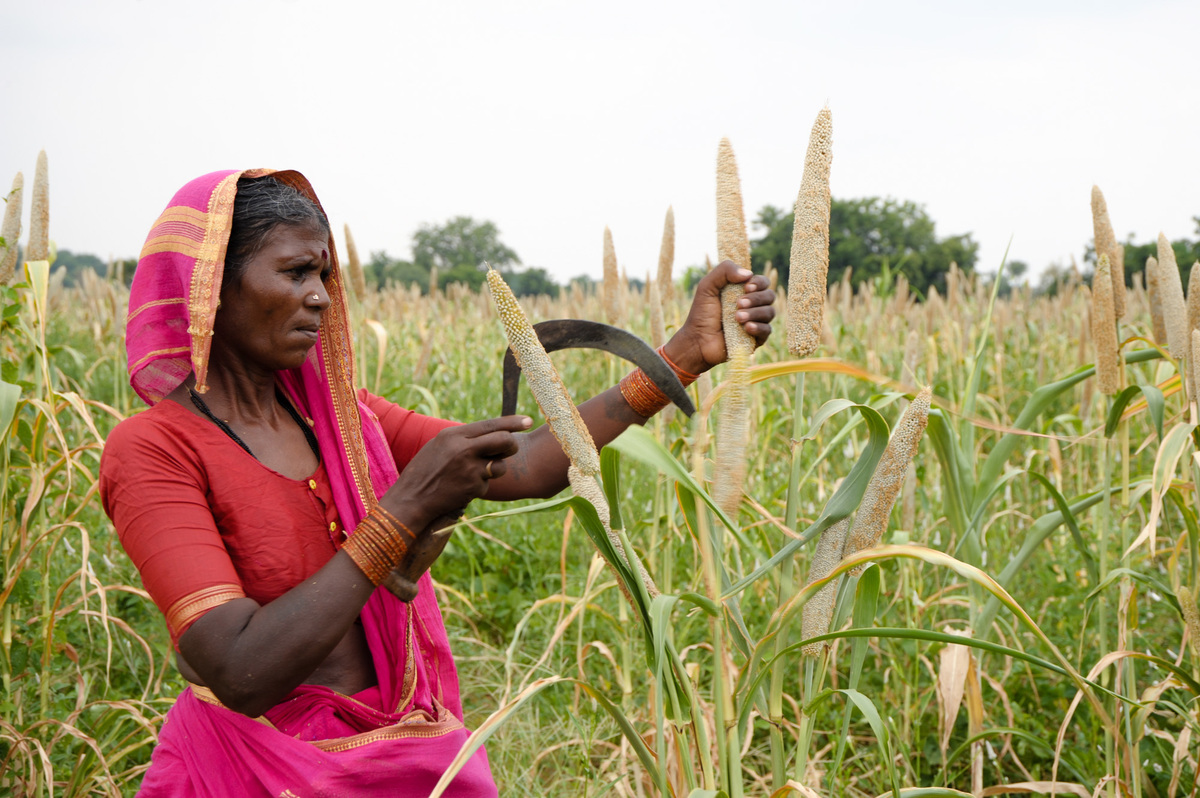 A woman farmers harvests pearl millet in Andhra Pradesh, India. Millets were once a steady part of Indians' diets until the Green Revolution, which encouraged farmers to grow wheat and rice. Now, the grains are slowly making a comeback.

Getting people to change what they eat is tough. Changing a whole farming system is even tougher. The southern Indian state of Karnataka is quietly trying to do both, with a group of cereals that was once a staple in the state: millet.

Until about 40 years ago, like most of India, the people of Karnataka regularly ate a variety of millets, from finger millet (or ragi) to foxtail millet. They made rotis with it, ate it with rice, and slurped it up at breakfast as porridge.

In the sixties, the Green Revolution – a national program that led to the widespread use of high yielding crop varieties, irrigation, fertilizers and pesticides – led to a dramatic increase in food grain production in India. But it also focused on two main crops – rice and wheat – which guzzle water.

"Crops that survived on rain rather than irrigation, and were far more sustainable, were forgotten," explains Dinesh Kumar, who runs Earth 360, a non-profit organization in the neighboring southern state of Andhra Pradesh that helps popularize millets and train farmers to grow them. "Millets began to be seen as food for the poor," says Kumar. "Rice was aspirational. White became right, brown became wrong." These days, millets are used mostly for animal fodder.

Now, after nearly four decades of intensive farming (and growing urban populations which use a lot of water), most of India is facing severe water crises. So, many states are trying to come up with a more sustainable way to farm. And Karnataka is leading the way with its efforts with millets.

There are many factors that make millets more sustainable as crops. Compare the amount of water needed to grow rice with that for millets. One rice plant requires nearly 2.5 times the amount of water required by a single millet plant of most varieties, according to the International Crops Research Institute for the Semi-Arid (ICRISAT), a global research organization helping to make millets more popular. That's why millets are primarily grown in arid regions of Asia, Africa and Latin America.

Millets can also withstand higher temperatures. "Crops like rice and wheat cannot tolerate temperatures more than 38 degrees Centigrade (100.4 Fahrenheit), while millets can tolerate temperatures of more than 46 degrees C (115 F)," says S.K Gupta, the principal scientist at the pearl millet breeding program at ICRISAT. "They can also grow in saline soil." Millets could therefore be an important solution for farmers grappling with climate change – sea level rise (which can cause soil salinity to increase), heat waves, droughts and floods.

Millets are also more nutritious than rice or wheat. They are rich in protein, fibers and micronutrients like iron, zinc and calcium, and thus hold immense promise for India's malnourished, especially those with micronutrient deficiencies.

Millets have a lower glycemic index (a measure of how fast our body converts food into sugar) than rice, which is thought to be one of the main factors contributing to the rise in rates of diabetes in India. Some scientists think eating millets could help Indians reduce their risk of this disease.

Switching to millets then should be easy. Or is it? A massive hurdle is that crops like rice, wheat and sugarcane are still way more profitable. "Unless millets match up to other crops, we can't force farmers to grow them," says Krishna Byre Gowda, Karnataka's Minister for Agriculture. "We are not trying to replace rice or wheat entirely. We are simply trying to supplement them with more sustainable crops." 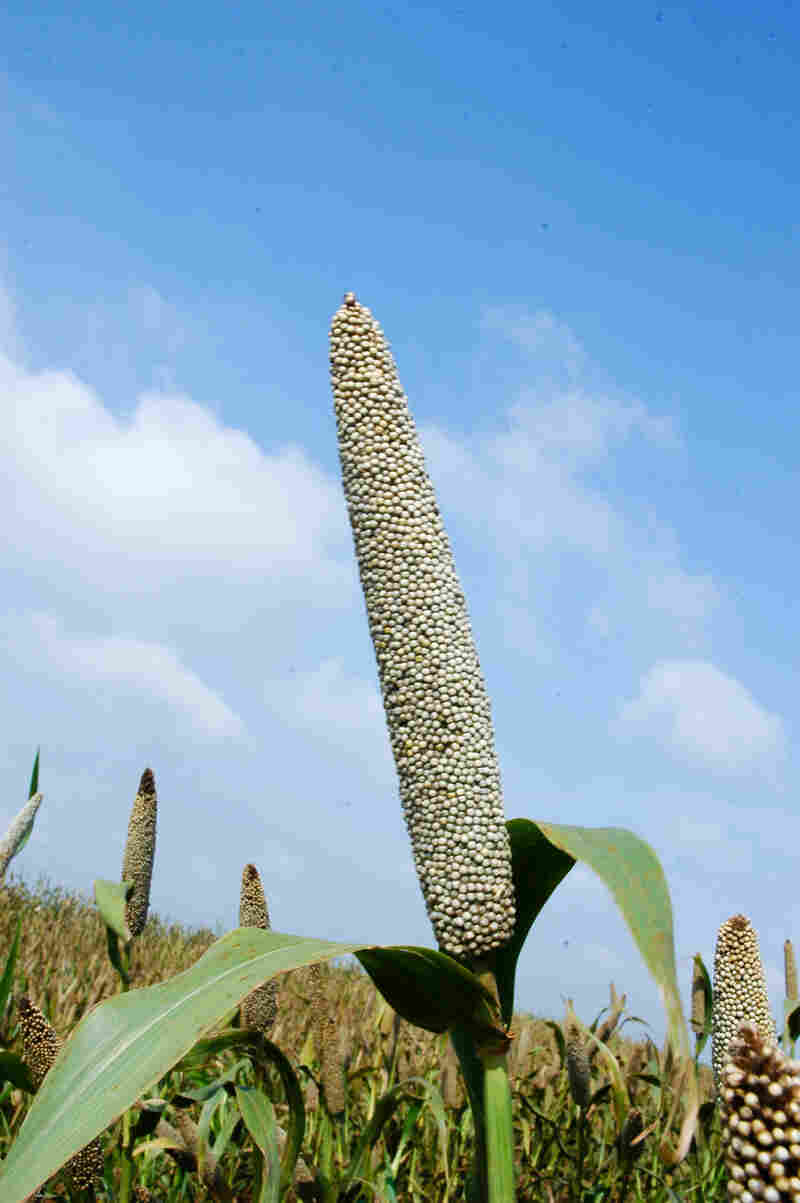 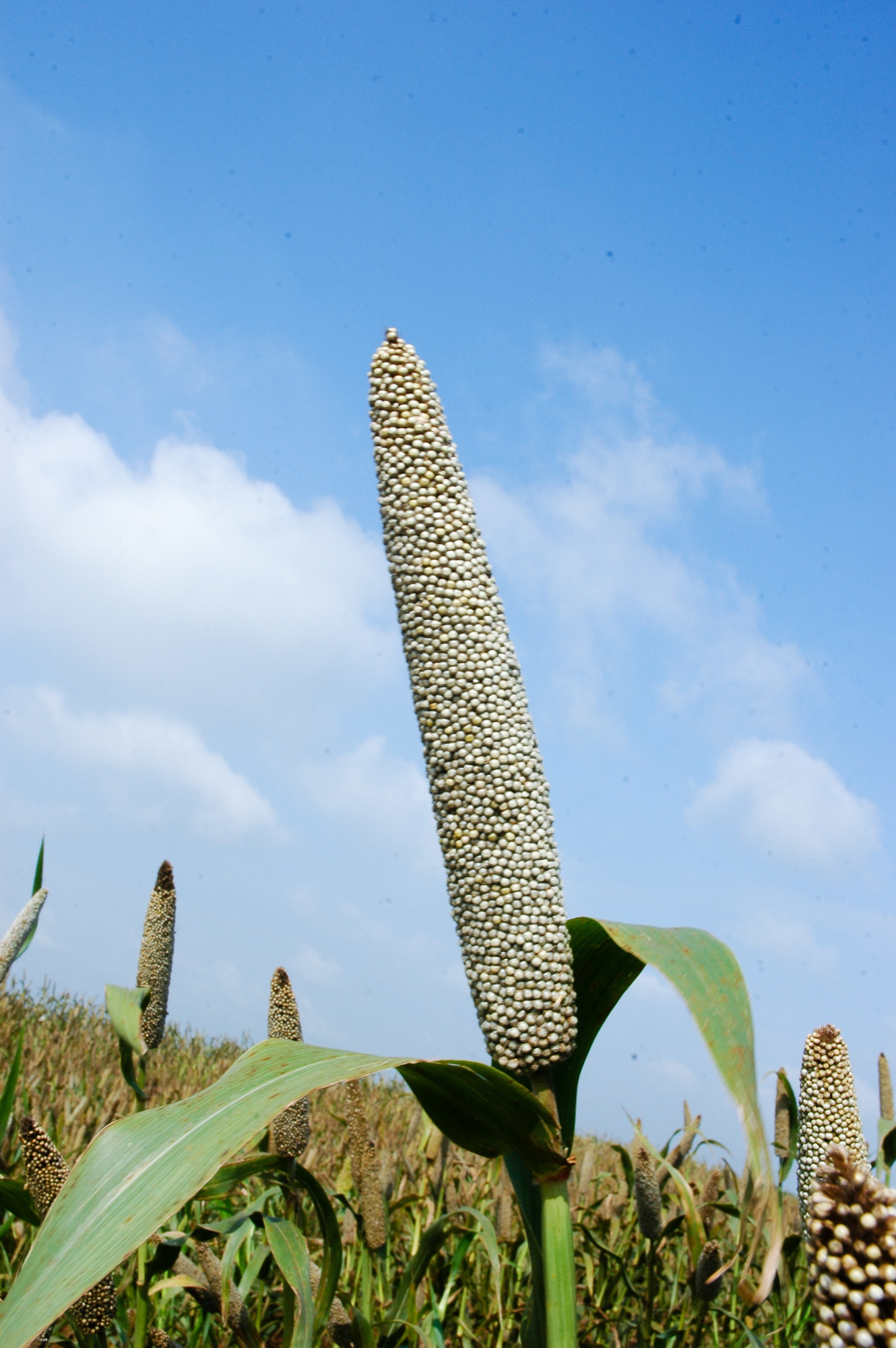 To make millets more attractive, his government has introduced a series of incentives. It offers farmers more than the minimum support price it pays for other crops, gives subsidies on seeds, and has made millets a part of the public distribution system: a country wide network that distributes cheap grains to the poor.

There's much lost ground to make up, because millets still don't have an efficient value chain. "Millets are coarse and need more processing than other crops, but the machines for these have not reached the farmer yet, and thus production remains low," says Gupta.

Narasimha Reddy, a farmer on the outskirts of Bangalore, recently switched from growing maize to ragi. "Ragi is much hardier than maize; it can endure for a month without any water," he says. Many farmers in his area are switching back to maize, because ragi costs far more to harvest, but Reddy plans to continue growing ragi. "Demand is slowly picking up in the city, and I think it will improve further now people know of the health benefits," he says. "There's no choice but to grow ragi if water levels deplete further. But we need more machines for quick harvesting, and better quality seeds."

The state government has partnered with research institutions to develop higher yield seeds and better ways to process seeds. All this is in line with recommendations made by a recent report by the Global Panel On Agriculture and Food Systems Nutrition, which found that people's diets are worsening as countries like India urbanize. That's because it is now easier and more affordable to buy unhealthy, processed foods and sodas than healthy foods. The authors of the report recommend that countries should invest more money into making healthy foods like millets, fruits and vegetables more affordable and easily available, rather than rice and wheat. "More and more villagers are migrating to the cities in search of work," says Gupta. "When they do, they lose their traditional food habits. We need to give those back to them."

But it may be impossible to bring back traditional millet-based foods that have fallen out of fashion. "You can't force people to go back to the food habits of their grandfathers – rotis, ragi balls and so forth – but you can get them to eat millet foods in tune with their new eating habits: breakfast cereals, cakes, pasta, baked products and ready to cook products," says Byregowda.

The government is partnering with research institutions and food companies to develop new food products. It is introducing these products at fairs, where the public is also educated about the benefits of eating millets. At a recent fair, products displayed included everything from millet pastas, chips and cakes to more traditional Indian dishes. Meanwhile, many hotels have introduced millets in breakfast buffets, millet pizzas, and millet biryanis.

The government is also approaching influencers – food writers, chefs, doctors, and the media – to help sell millet to the newly affluent, quinoa- and chia-seed-eating, health conscious Indian customer. "If you can eat imported quinoa, why can't you eat millet?" asks Joanna Kane-Potaka, ICRISAT's director of communications.

Why not indeed? As a child I used to eat ragi porridge, but I haven't eaten it in decades. So I try some new millet products to reacquaint myself with the grain. A ragi cereal turned out to be about as edible as pulverized doormats. But another product from the same company, chocolate ragi puffs, was almost as good as Kelloggs's Cocopops, if still heavy on the sugar.

Ragi digestive cookies from a big company were too chewy, but those from a small neighborhood bakery turned out to be surprisingly good and child-pleasing. A couple of handfuls of ragi batter in dosas (Indian style rice pancakes) was almost indistinguishable in taste, and I threw some into banana bread with the same result.

For most of us, returning to millets may involve some trial and error. But as Kumar points out, even a few handfuls of millet in your everyday foods is better for you than none. Besides, by 2050, India will need to feed 1.7 billion people. And millets could help make that happen.