Accessibility links
1,000 Years Ago, Corn Made Cahokia, An American Indian City Big. Then, Climate Change Destroyed It : The Salt The Mississippian American Indian culture rose to power after A.D. 900 by farming corn. Now, new evidence suggests a dramatic change in climate might have led to the culture's collapse in the 1300s.

1,000 Years Ago, Corn Made This Society Big. Then, A Changing Climate Destroyed It

1,000 Years Ago, Corn Made This Society Big. Then, A Changing Climate Destroyed It 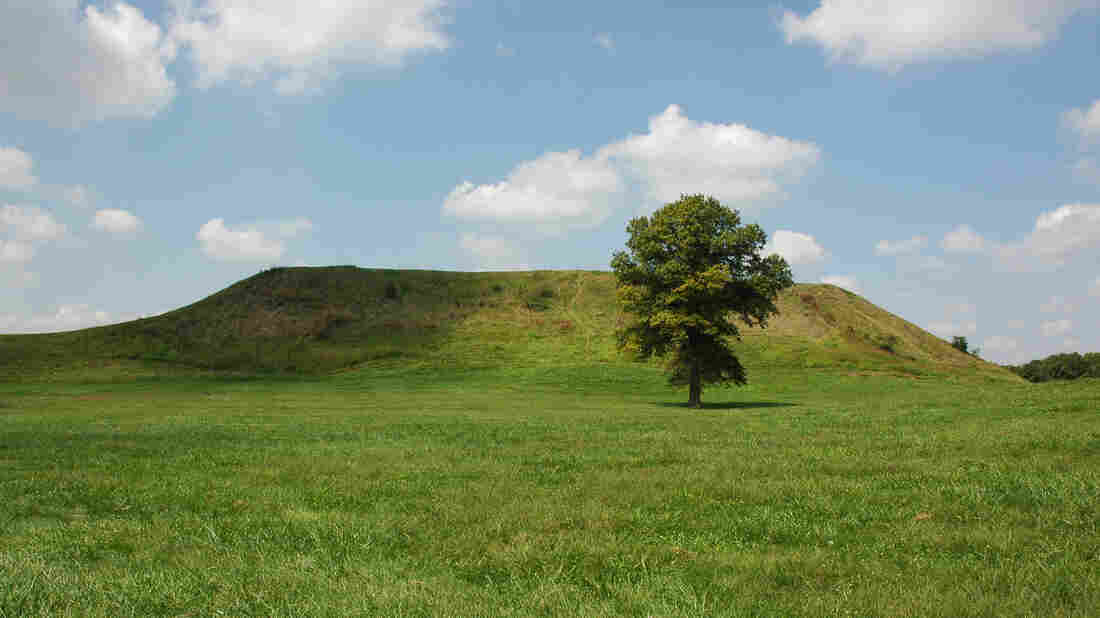 Cahokia Mounds State Historic Site in Collinsville, Ill. A thriving American Indian city that rose to prominence after A.D. 900 owing to successful maize farming, it may have collapsed because of changing climate. Michael Dolan/Flickr hide caption 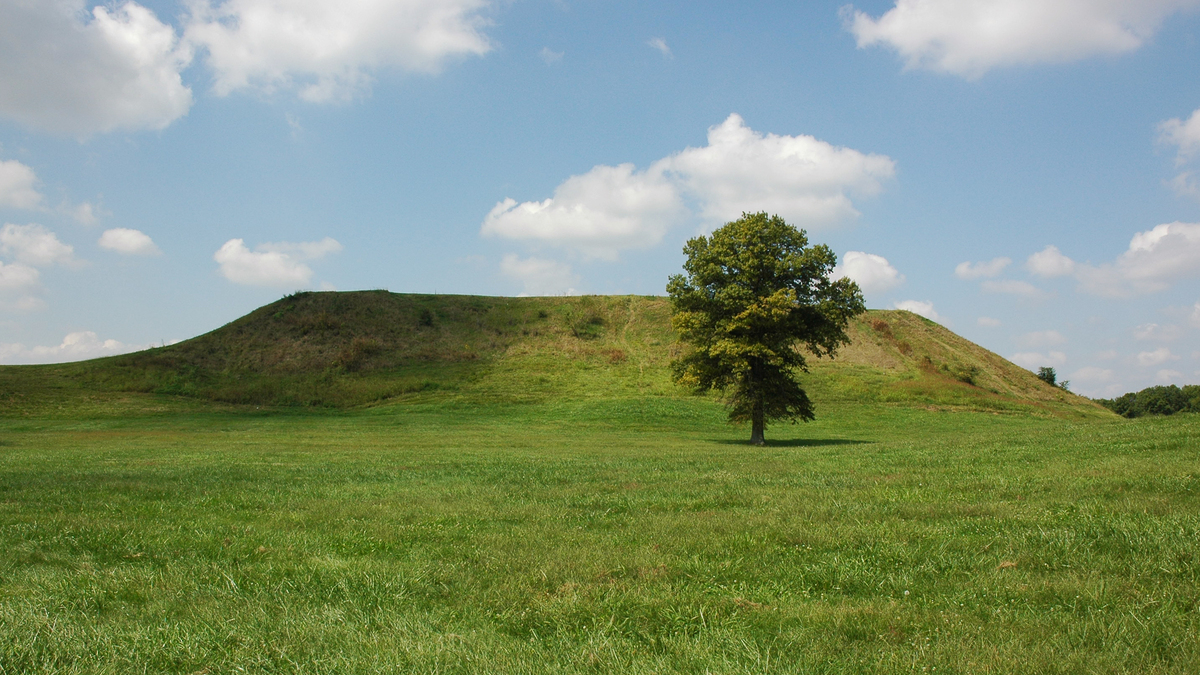 Cahokia Mounds State Historic Site in Collinsville, Ill. A thriving American Indian city that rose to prominence after A.D. 900 owing to successful maize farming, it may have collapsed because of changing climate.

About a 15-minute drive east of St. Louis is a complex of earthen mounds that once supported a prehistoric city of thousands. For a couple of hundred years, the city, called Cahokia, and several smaller city-states like it flourished in the Mississippi River Valley. But by the time European colonizers set foot on American soil in the 15th century, these cities were already empty.

Scientists cannot seem to agree on what exactly led to the rise or the fall of this Mississippian American Indian culture, a group of farming societies that ranged from north of the Cahokia site to present-day Louisiana and Georgia. Possible explanations have included massive floods and infighting. But a recent study heaps new evidence on another theory, one contending that changing climate, and its influence on agriculture, were the forces that made the cities flourish, then drove them to collapse.

Cahokia was the largest, and possibly the cultural and political center, of the Mississippian cities, says archaeologist Timothy Pauketat from the University of Illinois, who wasn't involved in the new study. Researchers have noted that these cities started building roughly around the time of an unusually warm period called the Medieval Climatic Anomaly. And they began declining when the global climate abruptly cooled during a time called the Little Ice Age. "But paleoclimate records from this region weren't really sufficient to test that hypothesis," says Broxton Bird, a climatologist from Indiana University-Purdue University Indianapolis, and lead author on the study.

The new evidence comes from ancient layers of calcite (a form of calcium carbonate) crystals buried between layers of mud in Martin Lake in nearby Indiana. The oxygen atoms in each layer of calcite contain information about the amount of rainfall the summer that the layer formed. A higher proportion of oxygen 18, a heavier isotope of the element, suggests greater rains, providing researchers with a year-by-year record of rainfall reaching back hundreds of years.

According to these lake sediments, the Central Mississippi Valley started getting more rain in the 900s. And that's when corn started thriving. A few decades later, skeletons from several Mississippian cities start showing a distinct carbon isotope signature from corn that suggests people were not only eating corn but eating lots of it. "That comes at right around 950 and that's around the time the population at Cahokia explodes," Bird says.

This is around the same time that the city's great earthwork pyramids started rising. Beside the massive, 10-story Monk's Mound is a grand plaza that was used for religious ceremonies and for playing the American Indian sport chunkey, involving distinctive stone discs later unearthed by archaeologists. "[Corn production] produces food surpluses," says Bird. And that allowed the Mississippians to build a society with complex recreation and religious practices, he says.

Cahokia became so notable at this time that other Mississippian chiefdoms may have begun forking off or springing up from its success, says Pauketat. Those other cultural centers were probably copying Cahokia, he says.

But the good times didn't last. Just a couple of centuries after the Mississippian cultures reached their prime, the medieval warming trend started to reverse, in part because of increased volcanic activity on the planet. Around A.D. 1200, weather patterns across North America shifted, and a transcontinental jet stream that once pulled life-giving rains from the Gulf of Mexico began funneling cold air from the bone-dry Arctic. "We switch to profound drought at A.D. 1350," Bird says. It was the start of the Little Ice Age. The dry spell wouldn't break for up to 500 more years, according to the Lake Martin calcite sediments.

The weather became poor for growing corn. On top of that, previous work from other researchers suggests that as the midcontinent and regions east of the Mississippi River became drier, lands west of the river became much wetter. Rains inundating its western headwaters might have caused massive flooding at Cahokia, stressing the already faltering farms. "This area hadn't been flooded like that for 600 years," says Samuel Munoz, a paleoclimatologist at Woods Hole Oceanographic Institute who did this research but wasn't part of Bird's study.

As food resources dwindled in the face of an unforgiving, centuries-long drought, Bird thinks the Mississippians' political atmosphere began destabilizing. "The signs of conflict don't really start in earnest until resources become scarcer after A.D. 1250," he says. "Not just more palisades and burned villages but actual skeletal injuries, decapitations, raids and things like that." With mounting bloodshed and increasing food scarcity that must have followed the dramatic change in climate, Bird thinks the Mississippians abandoned their cities and migrated to places farther south and east like present-day Georgia, where conditions were less extreme. Before the end of the 14th century, the archaeological record suggests Cahokia and the other city-states were completely abandoned.

It may not be the whole story, though, says Pauketat. "I do accept [the climate argument] to some extent, but this broad-brush treatment suggests people become passive and their rise or collapse depends on how much it rains." Instead, he points to other social and political factors that could have driven the rise or fall of Mississippian cultures.

The people who built Cahokia, for instance, had a choice spot for city building, he says. "It just so happens that some of the richest agricultural soils in the midcontinent are right up against that area of Cahokia." Perhaps the prime location — and not just the amount of rain — helped the city come to prominence, he says. Cahokia seems to also have been an important religious center for the Mississippians. On top of many of the earthwork mounds were temples and sacrificial sites, some with evidence of human sacrifices. That could also have contributed to Cahokia's success, as groups of people from miles around may have migrated to be near this divine spot, Pauketat says.

As for the city's downfall, it might have succumbed not just to climate but also to warfare for cultural or territorial reasons. If it is true that Cahokia was a magnet city for many peoples, ethnic or cultural barriers between different groups could have led to political tension, he says. Then, the fall of Cahokia might have had a domino effect on other Mississippian city-states that depended culturally and politically on Cahokia, he adds.

It's possible that climate change and food insecurity might have pushed an already troubled Mississippian society over the edge, says Jeremy Wilson, an archaeologist at IU-PUI and a coauthor on the paper. "The climate change we have documented may have exacerbated what was an already deteriorating sociopolitical situation," he says.

A previous version of this story misspelled Jeremy Wilson's first name as Jeremey and misidentified the associations of two of the paper's authors as Purdue University instead of Indiana University-Purdue University Indianapolis.