Accessibility links
Frederick Douglass On How Slave Owners Used Food As A Weapon Of Control : The Salt Hunger was Douglass' constant companion as a boy. As a young man, he escaped slavery and became a heroic abolitionist who revealed how food was a key tool in the immoral mechanics of slavery. 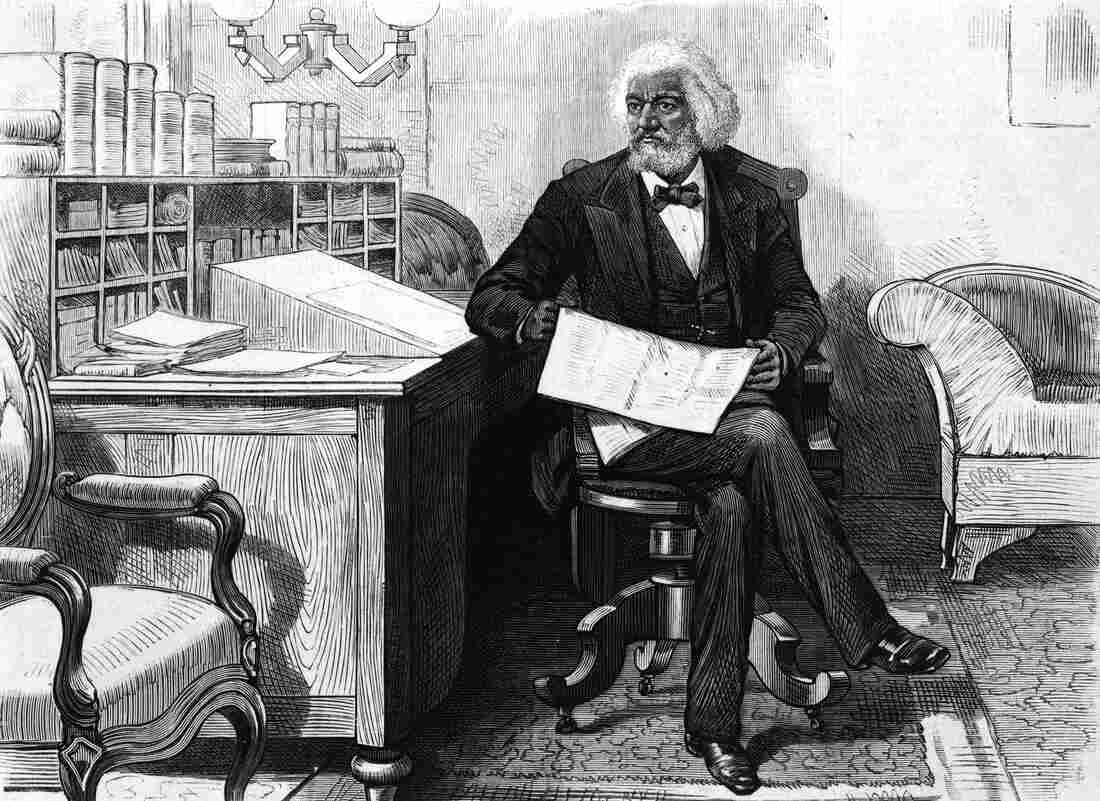 American writer, abolitionist and orator Frederick Douglass edits a journal at his desk, late 1870s. Douglass was acutely conscious of being a literary witness to the inhumane institution of slavery he had escaped as a young man. He made sure to document his life in not one but three autobiographies. Hulton Archive/Getty Images hide caption 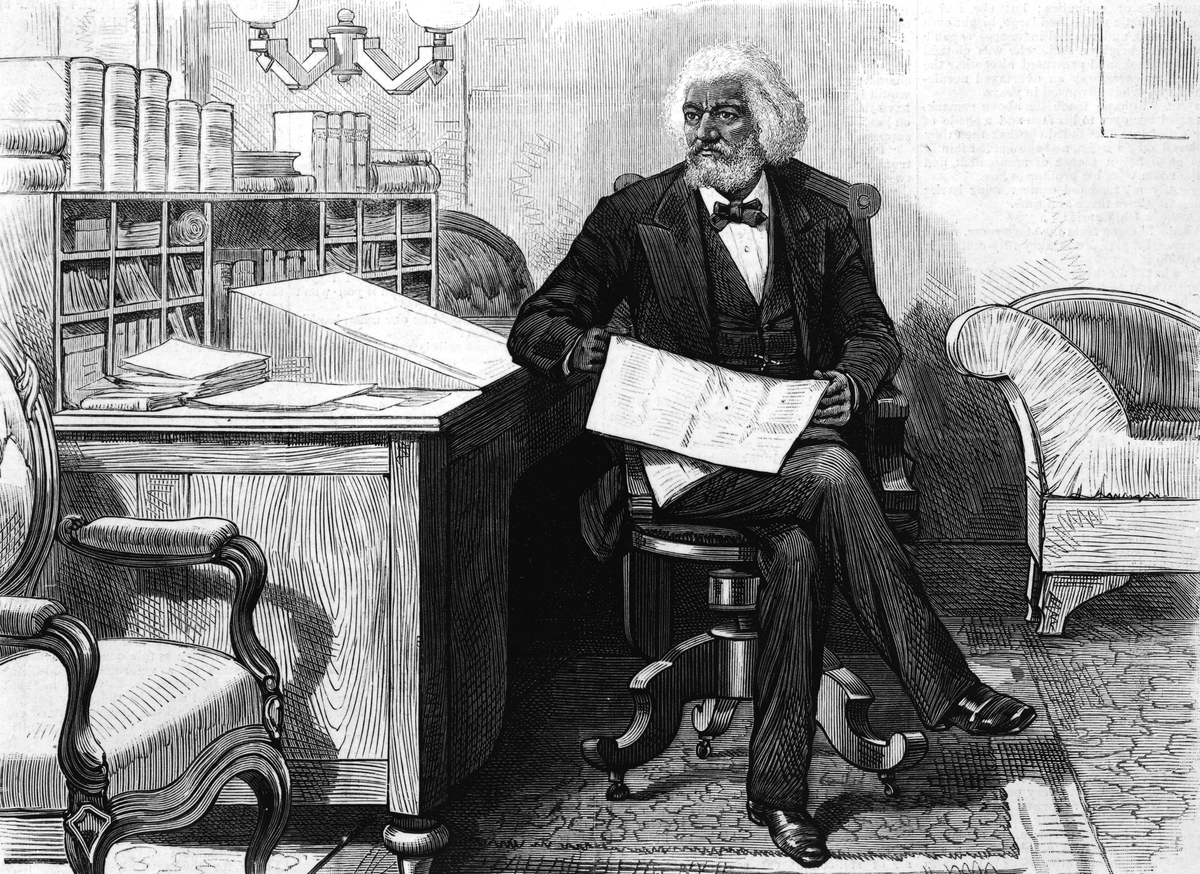 American writer, abolitionist and orator Frederick Douglass edits a journal at his desk, late 1870s. Douglass was acutely conscious of being a literary witness to the inhumane institution of slavery he had escaped as a young man. He made sure to document his life in not one but three autobiographies.

President Trump recently described Frederick Douglass as "an example of somebody who's done an amazing job and is being recognized more and more, I notice." The president's muddled tense – it came out sounding as if the 19th-century abolitionist were alive with a galloping Twitter following – provoked some mirth on social media. But the spotlight on one of America's great moral heroes is a welcome one.

Douglass was born on a plantation in Eastern Maryland in 1817 or 1818 – he did not know his birthday, much less have a long-form birth certificate – to a black mother (from whom he was separated as a boy) and a white father (whom he never knew and who was likely the "master" of the house). He was parceled out to serve different members of the family. His childhood was marked by hunger and cold, and his teen years passed in one long stretch of hard labor, coma-like fatigue, routine floggings, hunger, and other commonplace tortures from the slavery handbook.

At 20, he ran away to New York and started his new life as an anti-slavery orator and activist. Acutely conscious of being a literary witness to the inhumane institution he had escaped, he made sure to document his life in not one but three autobiographies. His memoirs bring alive the immoral mechanics of slavery and its weapons of control. Chief among them: food.

Hunger was the young Fred's faithful boyhood companion. "I have often been so pinched with hunger, that I have fought with the dog – 'Old Nep' – for the smallest crumbs that fell from the kitchen table, and have been glad when I won a single crumb in the combat," he wrote in My Bondage and My Freedom. "Many times have I followed, with eager step, the waiting-girl when she went out to shake the table cloth, to get the crumbs and small bones flung out for the cats." 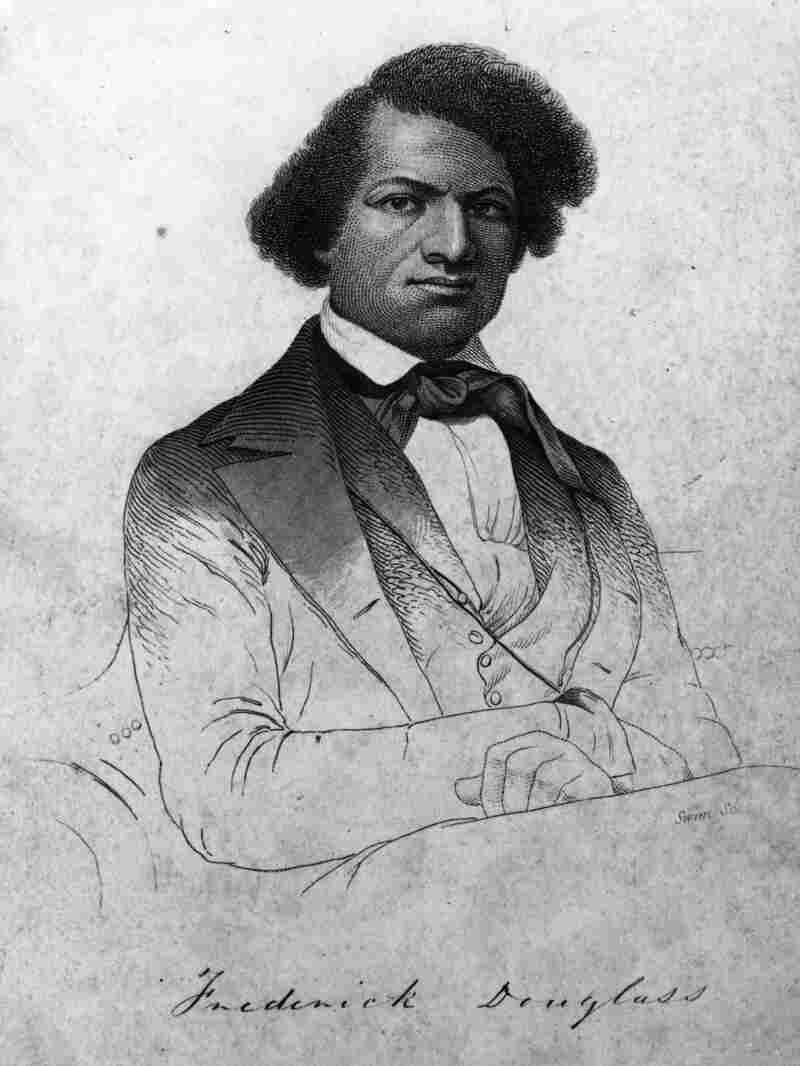 As a young enslaved boy in Baltimore, Frederick Douglass bartered pieces of bread for lessons in literacy. His teachers were white neighborhood kids, who could read and write but had no food. At 20, he ran away to New York and started his new life as an anti-slavery orator and activist. Hulton Archive/Getty Images hide caption 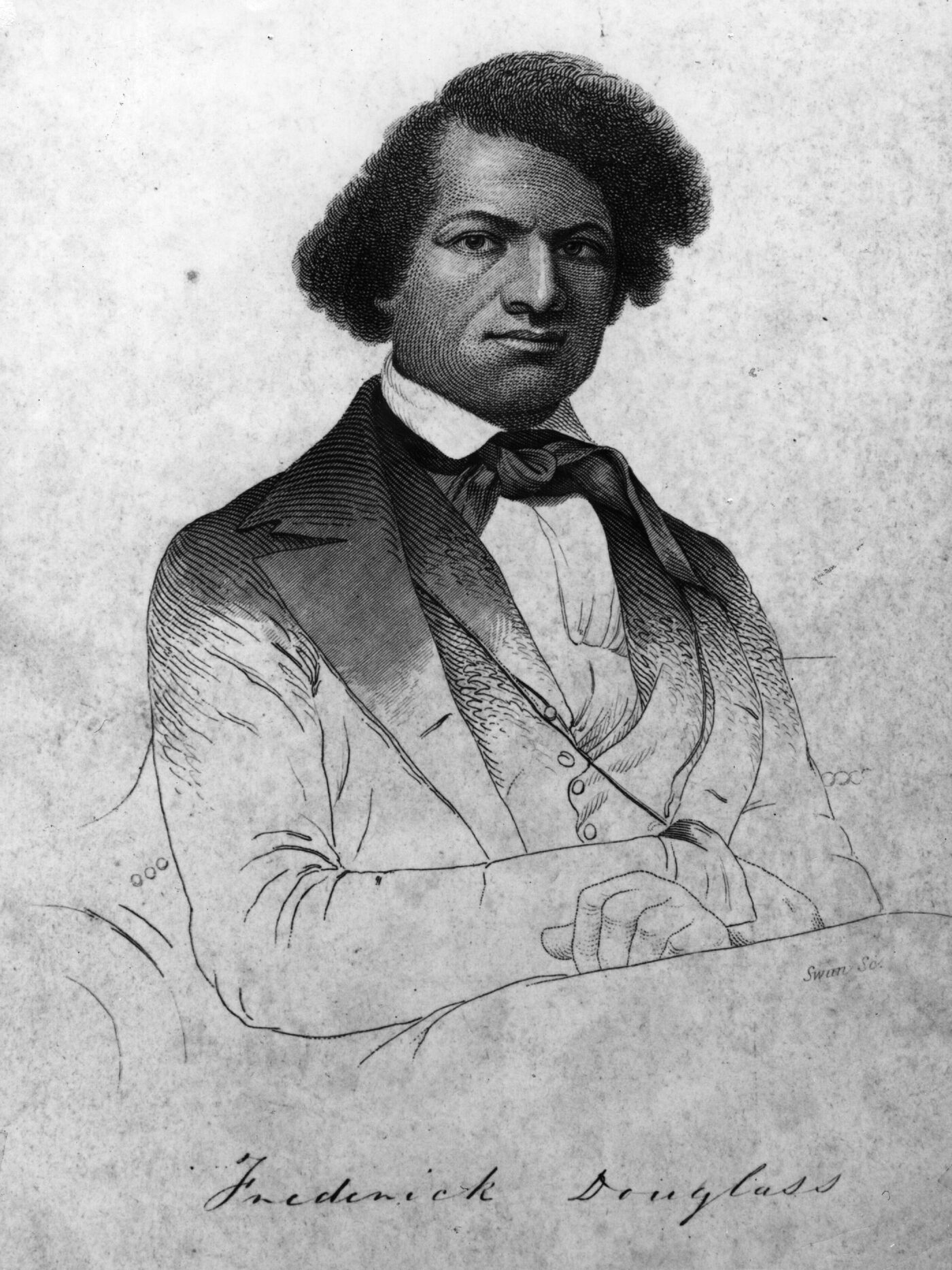 As a young enslaved boy in Baltimore, Frederick Douglass bartered pieces of bread for lessons in literacy. His teachers were white neighborhood kids, who could read and write but had no food. At 20, he ran away to New York and started his new life as an anti-slavery orator and activist.

"Never mind, honey—better day comin,' " the elders would say to solace the orphaned boy. It was not just the family pets the child had to compete with. One of the most debasing scenes in Douglass' first memoir, Narrative of the Life of Frederick Douglass, describes the way he ate:

"Our food was coarse corn meal boiled. This was called mush. It was put into a large wooden tray or trough, and set down upon the ground. The children were then called, like so many pigs, and like so many pigs they would come and devour the mush; some with oyster-shells, others with pieces of shingle, some with naked hands, and none with spoons. He that ate fastest got most; he that was strongest secured the best place; and few left the trough satisfied."

Douglass makes it a point to nail the boastful lie put out by slaveholders – one that persists to this day – that "their slaves enjoy more of the physical comforts of life than the peasantry of any country in the world."

In truth, rations consisted of a monthly allowance of a bushel of third-rate corn, pickled pork (which was "often tainted") and "poorest quality herrings" – barely enough to sustain grown men and women through their backbreaking labors in the field. Not all the enslaved, however, were so ill-fed. Waiting at the "glittering table of the great house" – a table loaded with the choicest meats, the bounty of the Chesapeake Bay, platters of fruit, asparagus, celery and cauliflower, cheese, butter, cream and the finest wines and brandies from France – was a group of black servants chosen for their loyalty and comely looks. These glossy servants constituted "a sort of black aristocracy," wrote Douglass. By elevating them, the slave owner was playing the old divide-and-rule trick, and it worked. The difference, Douglass wrote, "between these favored few, and the sorrow and hunger-smitten multitudes of the quarter and the field, was immense."

The "hunger-smitten multitudes" did what they could to supplement their scanty diets. "They did this by hunting, fishing, growing their own vegetables – or stealing," says Frederick Douglass Opie, professor of history and foodways at Babson College, who, of course, is named after the activist. "In their moral universe, they felt, 'You stole me, you mistreated me, therefore to steal from you is quite normal.' " If caught, say, eating an orange from the owner's abundant fruit garden, the punishment was flogging. When even this proved futile, a tar fence was erected around the forbidden fruit. Anyone whose body bore the merest trace of tar was brutally whipped by the chief gardener.

But if deprivation was one form of control, a far more insidious and malicious one was the annual Christmas holidays, where gluttony and binge drinking was almost mandatory. During those six days, the enslaved could do what they chose, and while a few spent time with distant family or hunting or working on their homes, most were happy to engage in playing sports, "fiddling, dancing, and drinking whiskey; and this latter mode of spending the time was by far the most agreeable to the feelings of our masters. ... It was deemed a disgrace not to get drunk at Christmas." To encourage whiskey benders, the "masters" took bets to see who could drink the most whiskey, thus "getting whole multitudes to drink to excess." 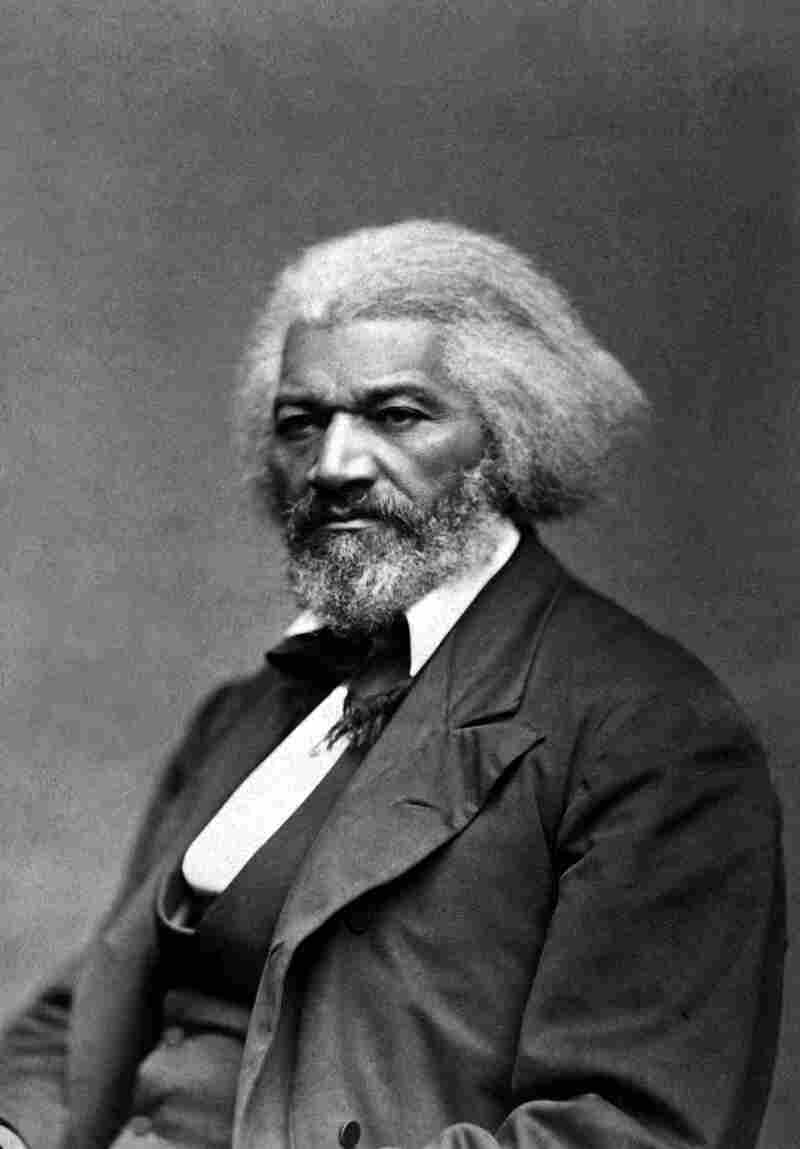 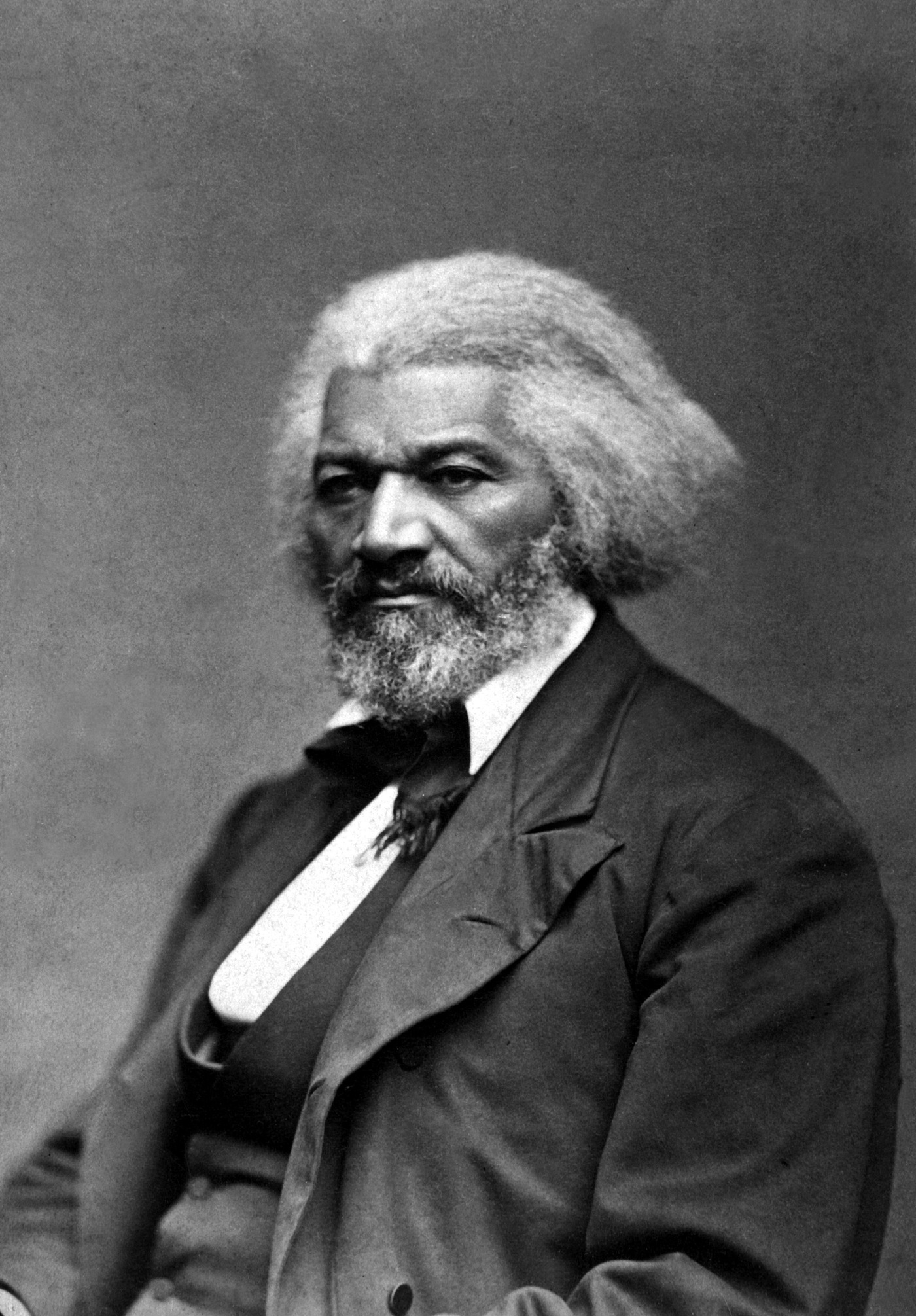 The nefarious aim of these revels was to equate dissipation with liberty. At the end of the holidays, sickened by the excessive alcohol, the hungover men felt "that we had almost as well be slaves to man as to rum." And so, Douglass wrote, "we staggered up from the filth of our wallowing, took a long breath, and marched to the field – feeling, upon the whole, rather glad to go, from what our master had deceived us into a belief was freedom, back to the arms of slavery."

"It was a form of bread and circus," says Opie. "Slaves were also given intoxicated drinks, so they would have little time to think of escaping. If you didn't take it, you were considered ungrateful. It was a form of social control."

When he was about 8 years old, Douglass was sent to Baltimore, which proved to be a turning point. The mistress of the house gave him the most precious gift in his life – she taught him the alphabet. But when her husband forbade her to continue – teaching slaves to read and write was a crime – she immediately stopped his lessons.

It was too late. The little boy had been given a peek into the transformative world of words and was desperate to learn. He did so by bartering pieces of bread – he had free access to it; in Baltimore, the urban codes of slavery were less harsh than in rural Maryland – for lessons in literacy. His teachers were white neighborhood kids, who could read and write but had no food. "This bread I used to bestow upon the hungry little urchins, who, in return, would give me that more valuable bread of knowledge," Douglass wrote in one of the most moving lines in Narrative.

"This also shows the ingenuity of enslaved people," says Opie, "and how they tricked and leveraged whatever little they had to get ahead."

Today, when one thinks of Frederick Douglass, the image that springs to mind is of a distinguished, gray-haired man in a double-breasted suit. It is difficult to imagine him as a half-starved boy garbed in nothing but a coarse, knee-length shirt, sleeping on the floor in a corn sack he had stolen. As he wrote in Narrative, "My feet have been so cracked with the frost, that the pen with which I am writing might be laid in the gashes."

It is a heartbreaking image – redeemed by one little word, "pen." A pen that he wielded with passion, clarity and irony to gash the life out of slavery.