Accessibility links
LA's Moves To Protect Immigrant Street-Food Vendors Come With A Catch : The Salt LA is the only major U.S. city where selling food on the sidewalk is illegal. President Trump's immigration policies have pushed the city council to change the law. But the devil is in the details. 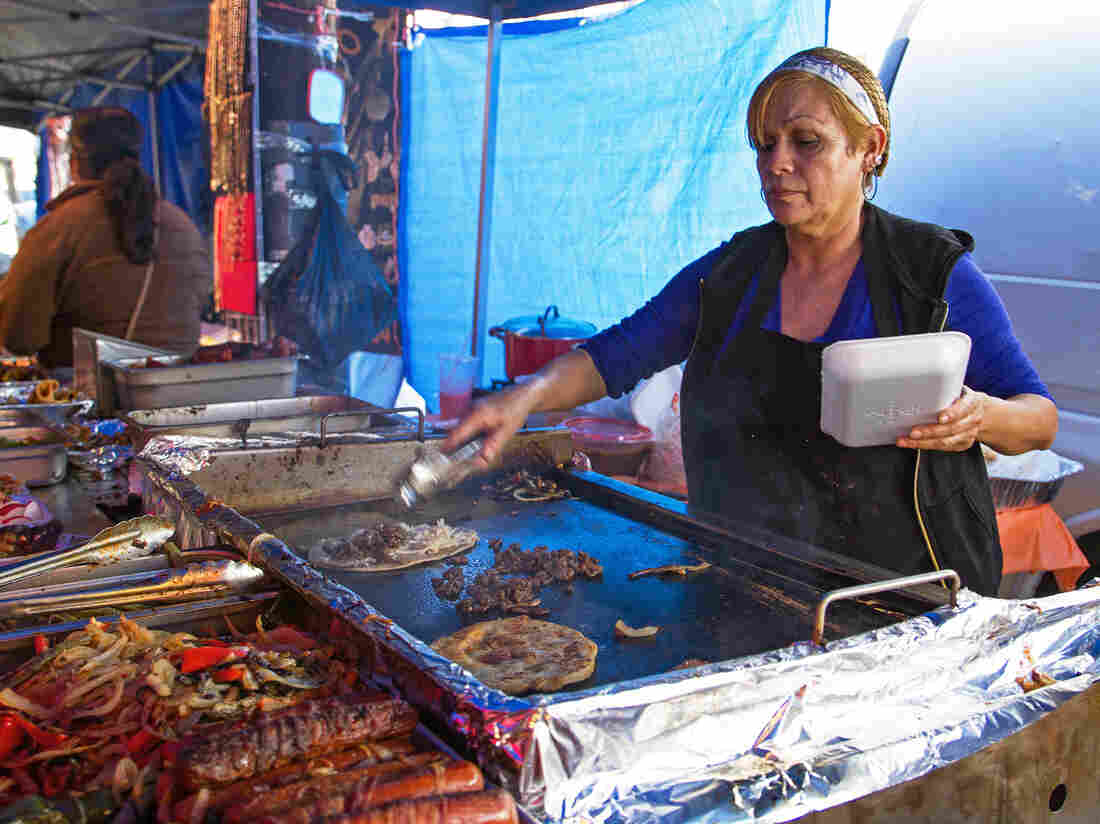 A street vendor makes huaraches and quesadillas on the sidewalk in the piÃ±ata district in Los Angeles. LA is the only major U.S. city where selling food on the sidewalk is illegal. President Trump's immigration policies have pushed the city council to change the law. But the devil is in the details. Camellia Tse for NPR hide caption 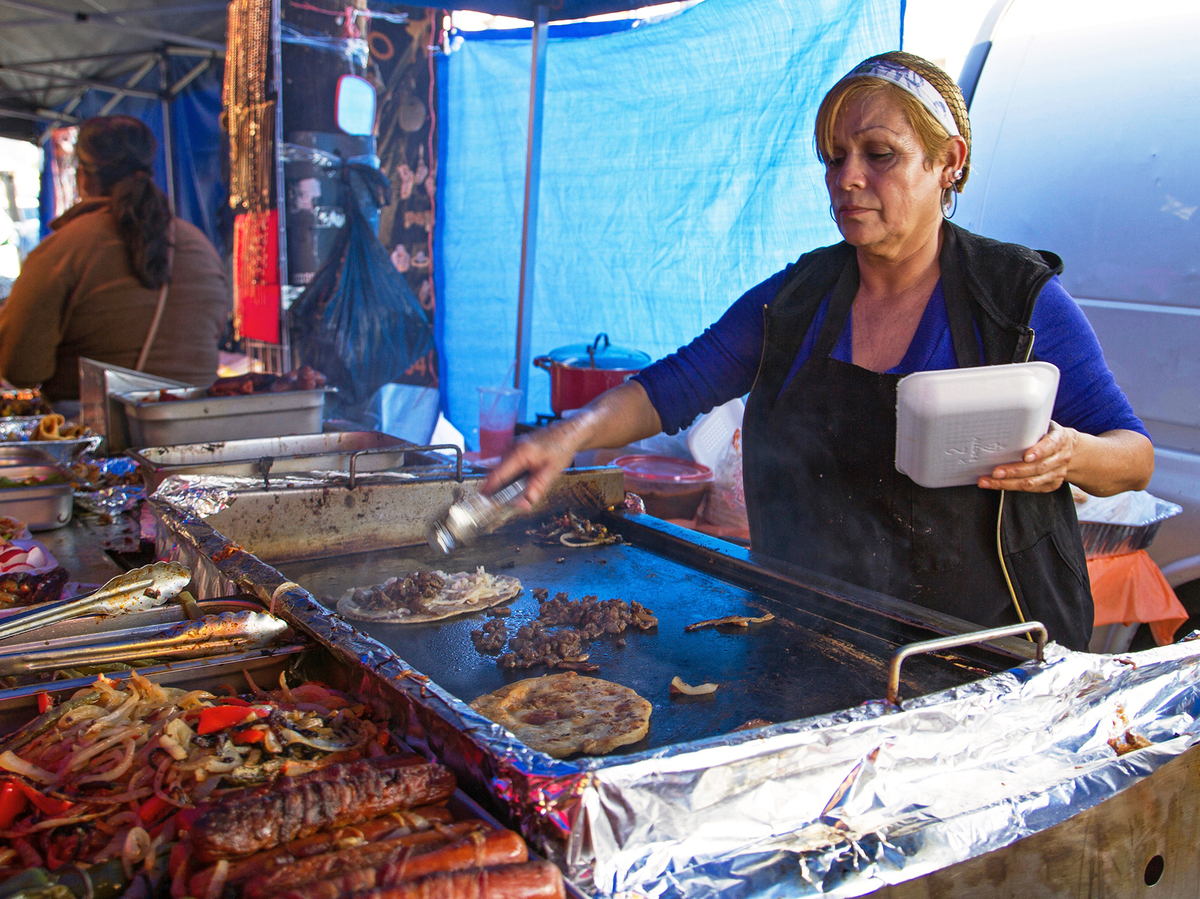 A street vendor makes huaraches and quesadillas on the sidewalk in the piÃ±ata district in Los Angeles. LA is the only major U.S. city where selling food on the sidewalk is illegal. President Trump's immigration policies have pushed the city council to change the law. But the devil is in the details.

On a sidewalk in Los Angeles' bustling piñata district, Enrique is using tongs to dip long, rosy strips of pig skin into a vat of boiling oil. When they're blistering, crispy and slightly cool, he lays the chicharrones on the table for hungry passersby. This is the taste of his native Mexico and it is delicious. But, technically, that chicharrón is also illegal.

"In the U.S., street vending is not criminalized in New York or Chicago. Only here," Enrique says. "Why?" He and other street vendors we spoke with for this story asked that we use only their first names because of recent raids that have led to the deportations of some people in the country illegally.

LA is the only major American city where it is against the law to sell food and merchandise on the sidewalk. Criminal charges are relatively rare — of the 50,000 street vendors in LA, just 22 were convicted of misdemeanors last year, according to the city attorney's office. Even so, President Trump's executive order to speed up the deportation of undocumented immigrants has pushed local elected officials to change the law. 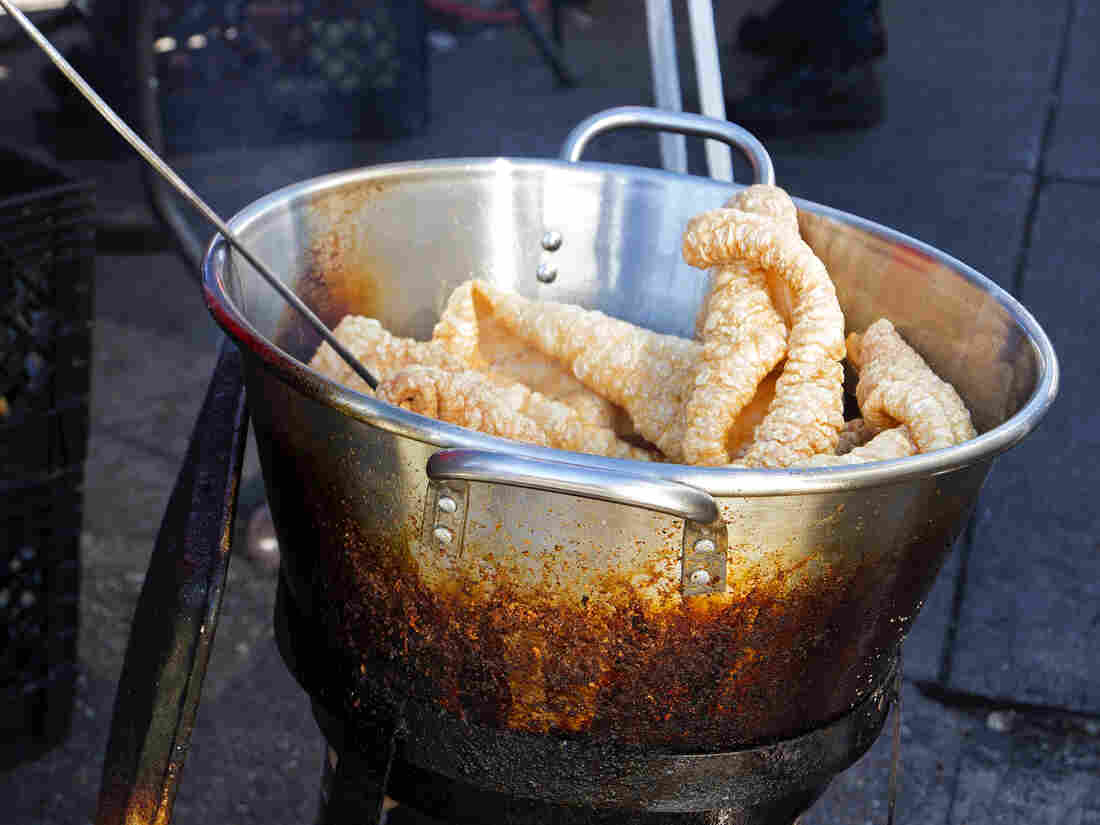 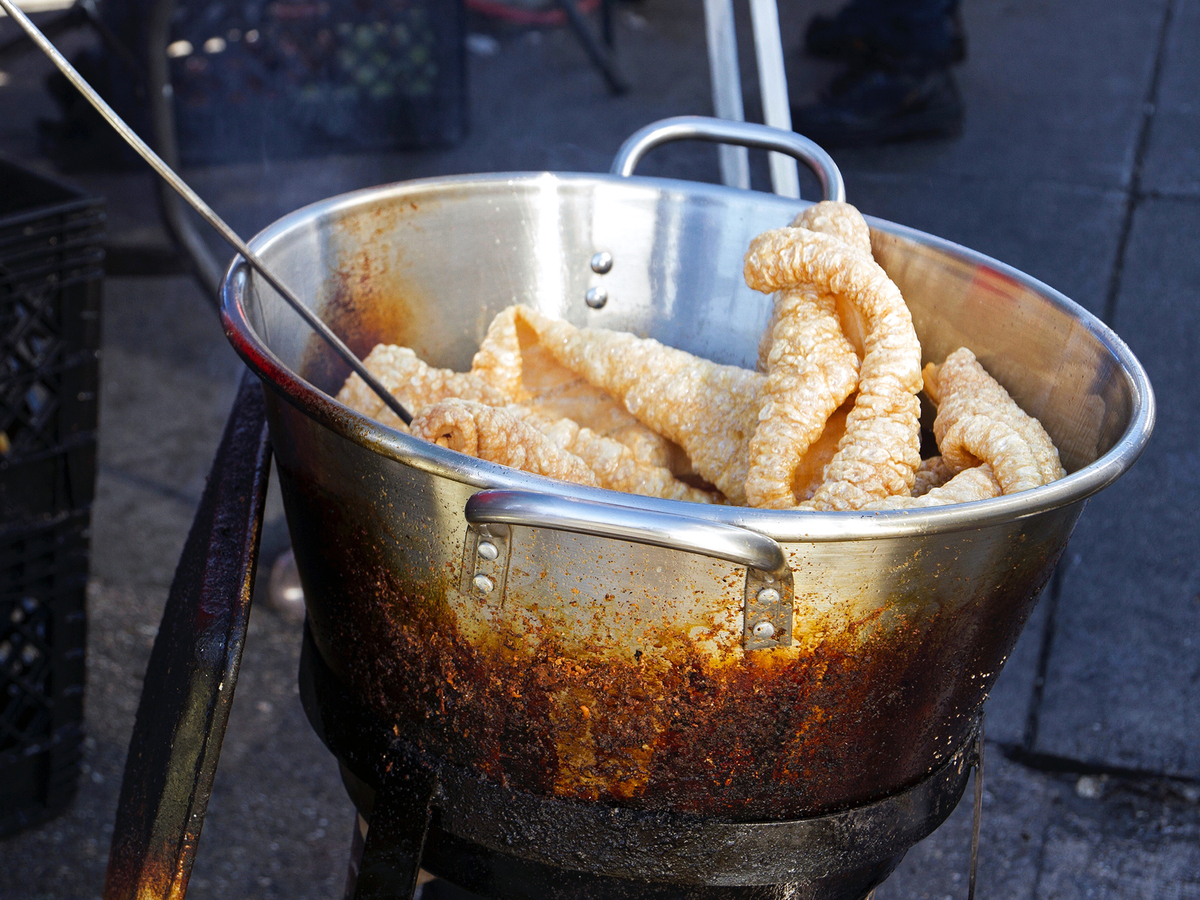 Chicharrones, or pork rinds, fry in the piñata district in Los Angeles.

"It does not make good economic or moral sense to criminalize Angelenos who are trying to make an honest living and support their families," says Mayor Eric Garcetti. "Finding a pathway to regulate street vending is not just the right thing to do for vendors, it's also good for the public and our local tax base."

So, on Wednesday, the city council voted, 13-0, to change the law regulating street vending in Los Angeles. Street vending is not yet legalized in LA; it will take months to finalize a legal permit system for sidewalk vendors.

Amid Travel Ban Debate, Chefs And Food Brands Take A Stand On Immigration

But the council fast-tracked one part of its proposal so that vendors with unpaid fines won't be charged with misdemeanor penalties. Mayor Garcetti is expected to sign it into law by the end of the week. Now, vendors who haven't paid their tickets won't face criminal charges, arrests or risk deportation for selling tacos, paletas and bacon-wrapped hotdogs on the streets of Los Angeles.

The council's plan to overhaul the city's street-vending law is heartening to Mario, an ice cream vendor from Puebla, Mexico, who has been making and selling 32 different flavors in the piñata district for almost a decade. "This will help us to pay rent, all the bills, to buy clothes and shoes for our children," he says.

Street vendors occasionally receive tickets for doing business on the sidewalk. Last year, across Los Angeles, the city collected $9,880 in fines. Individual citations range from $50 to over $1,000, according to Leadership for Urban Renewal Network, a community group that has been working for years to create a legal permit system for sidewalk vendors. This can be steep for vendors like Mario, who make about $75 a day selling food. Vendors can also get their equipment confiscated by police.

But the devil is in the details. The city council's proposed street vending overhaul includes controversial changes. In commercial and industrial districts, for example, the new law would allow just two stationary vendors per block. In the piñata district, there are easily 100 vendors lining East Olympic Boulevard on the long block between Kohler and Merchant streets. 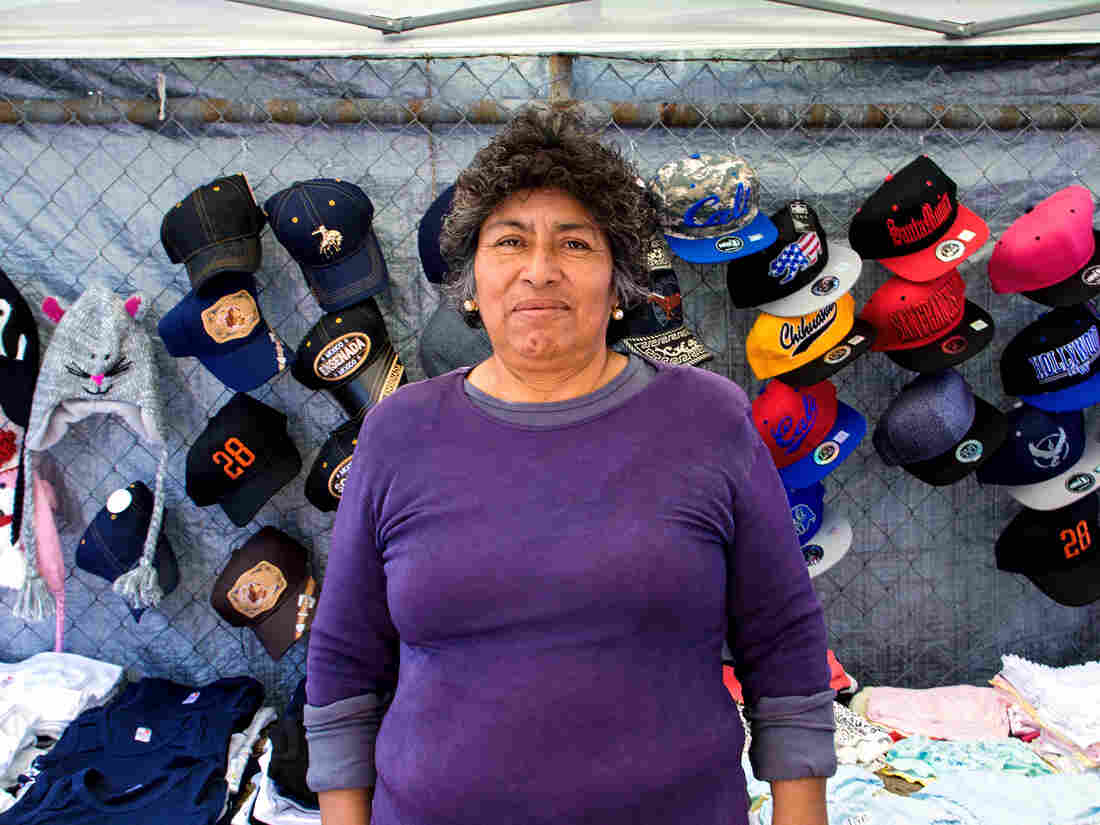 Merced is a vendor in the piñata district. She is worried that the city council's plan for a legal permitting system for sidewalk vendors, as proposed, will severely limit how many vendors can be on a given sidewalk, leaving many without a place to do business. Camellia Tse for NR hide caption 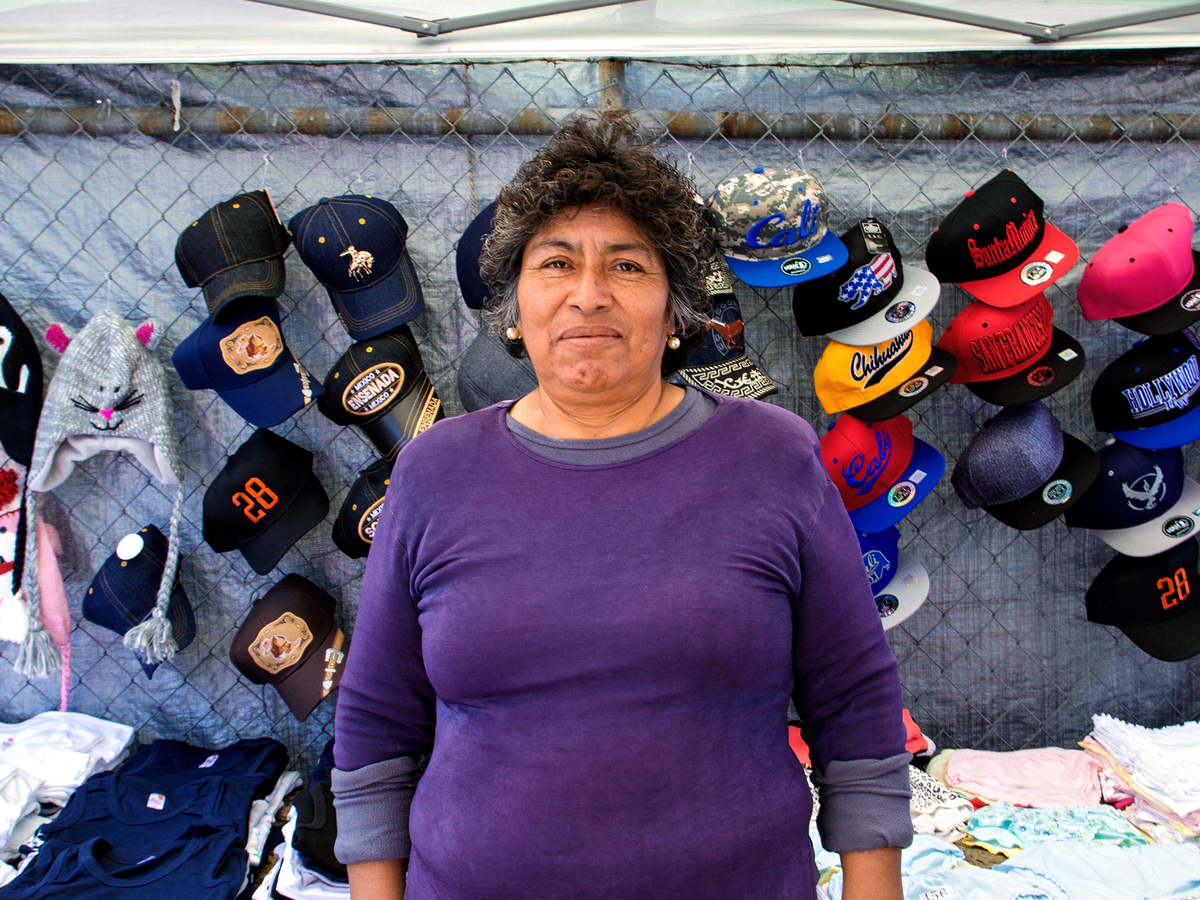 Merced is a vendor in the piñata district. She is worried that the city council's plan for a legal permitting system for sidewalk vendors, as proposed, will severely limit how many vendors can be on a given sidewalk, leaving many without a place to do business.

"Where will the other 98 go?" asks Merced. She's selling sunglasses at the market for $5 a pair and is urging vendors to voice their concerns in subsequent public city council meetings. Perhaps the piñata district can be excluded from the two-vendor measure in the new law, she says.

Some LA communities don't want any vendors on their blocks. "In Westwood, we have an abundance of food and retail and we would like ... to be able to opt out of a street vending program," says Andrew Thomas, executive director of the Westwood Village Improvement Association.

Norm Langer, the owner of Langer's Deli, one of the go-to spots for tourists and hungry Angelenos to get their pastrami fix, says there are already too many vendors working the block where his restaurant is located at Alvarado and 7th Street.

"I am OK with the vendors as long as they do what the city council will propose, and that's two people on every city block," says Langer. "But who is going to enforce all this? The city council says the permit fees will cover it. No, they won't. There are health department issues. There's no visible sign of sanitation. Some of these people are selling food and there's no place for them to wash their hands. They're grilling hot dogs with bacon and flies."

Nakul Mahendro doesn't want a hot dog stand to set up shop in front of his hip Indian restaurant, Badmaash, in downtown LA. But he is a big fan of street food and fears his favorite vendors down the pike will go out of business from high fees for health department and business permitting.

The licensing fees that vendors will have to pay will take time to hash out. "It's important that we decriminalize street vending so that it can be regulated by the city and the health department. Just don't change anything about Avenue 26 Tacos," says Mahendro.

Councilman Joe Buscaino has been one of the lead local officials pushing to change the law. He is confident that all concerns from brick-and-mortar restaurants will be addressed when the permitting system is finalized.

"Los Angeles is a diverse city, and it is difficult to create a one-size fits all solution, which is why this proposal allows community members to customize the regulations to fit their unique neighborhood," says Buscaino.

Meanwhile in the piñata district, tensions are high. Last week, 160 people were detained by immigration enforcement agents in Southern California, and Trump is expected to sign a new executive order related to immigration this week.

"We came to the U.S. to succeed and live a better life. We don't want to bother anyone. We aren't committing crimes," says the chicharrón man, Enrique. Choking back tears, he says: "I've always agreed that those who commit crimes should be deported to their home countries. But people who haven't done anything? What have we done wrong?"