Accessibility links
Why Ditching NAFTA Could Hurt American Farmers More Than Mexican Ones : The Salt Trade in food between the U.S. and Mexico has exploded over the past 15 years. President Trump is talking about restricting that trade, but when it comes to food, such moves could backfire. 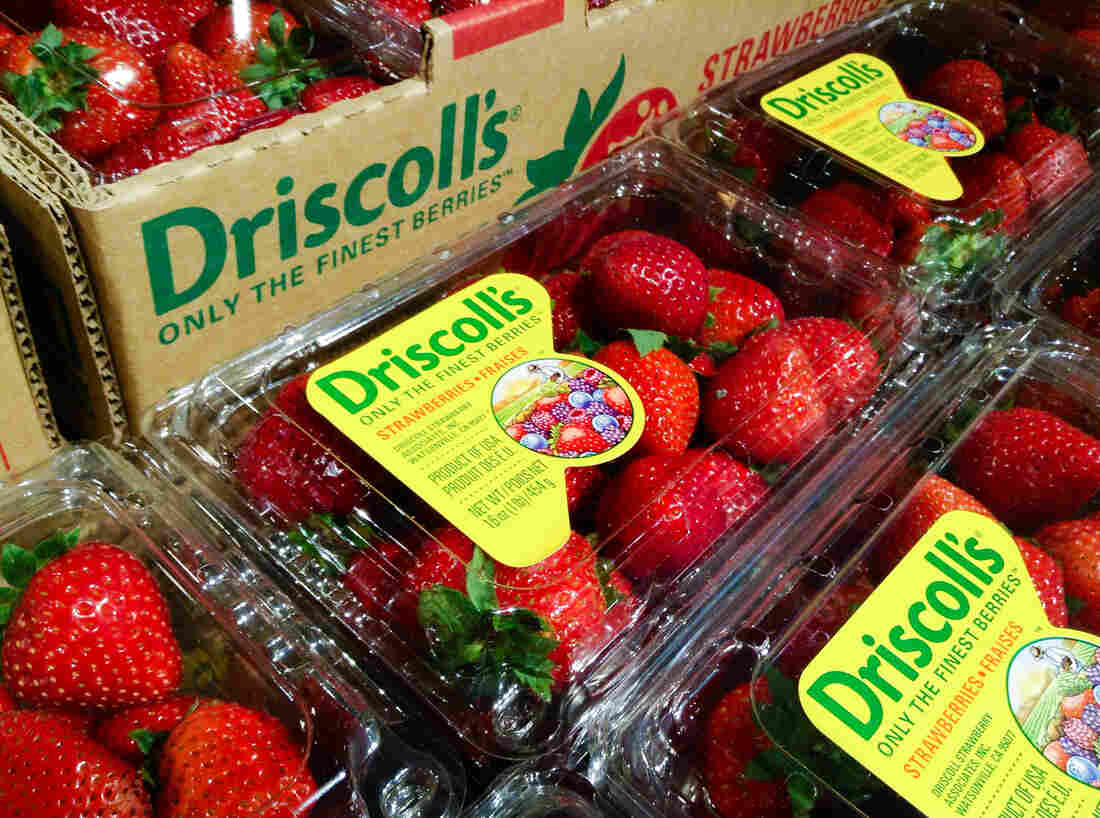 Driscoll's, the largest berry producer in the world, now grows about the same quantity of raspberries and strawberries in Mexico as it does in California. Many American producers have recently expanded their production to Mexico. Mike Mozart/Flickr hide caption 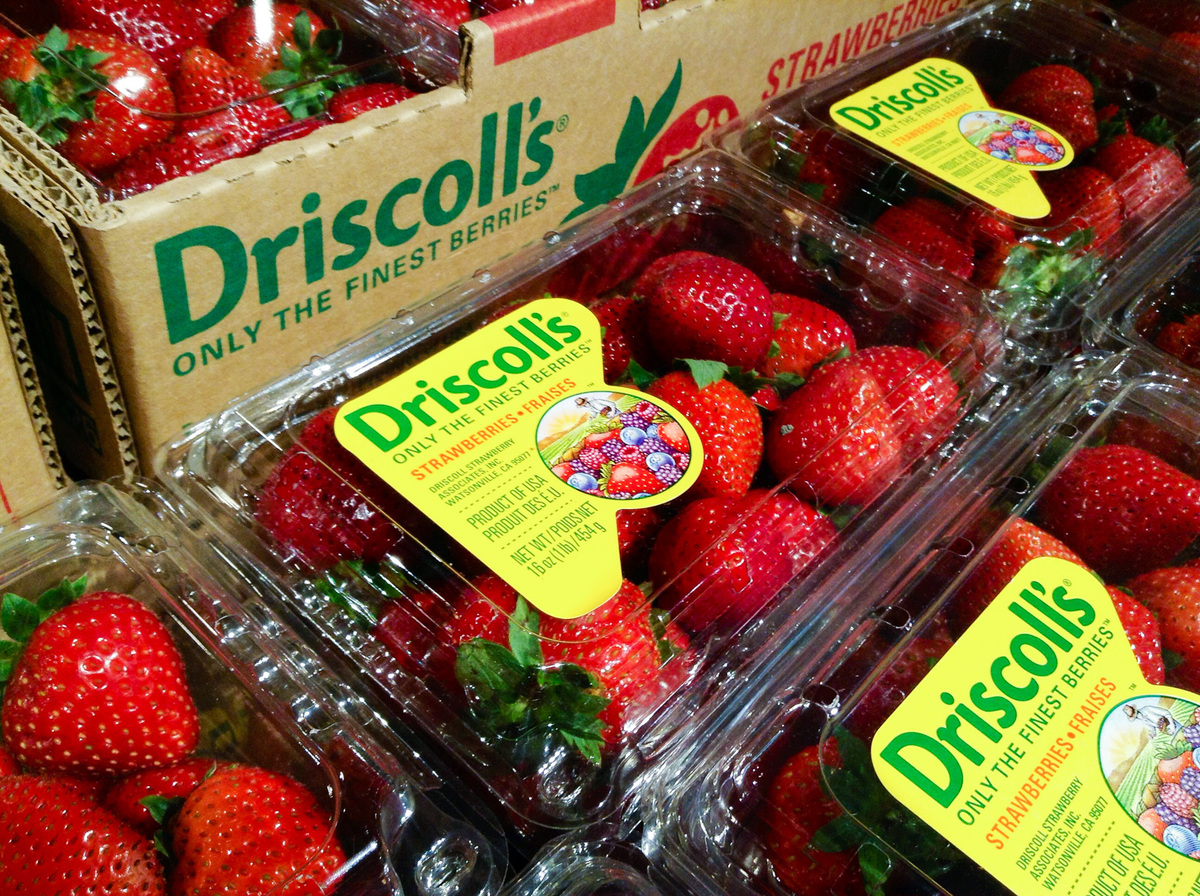 Driscoll's, the largest berry producer in the world, now grows about the same quantity of raspberries and strawberries in Mexico as it does in California. Many American producers have recently expanded their production to Mexico.

Garland Reiter is one of the people behind the rise in imported food from Mexico.

His family has been growing strawberries in California for generations and selling them under the name Driscoll's. Today, it's the biggest berry producer in the world.

In the early 1990s, the Reiter family started growing strawberries and raspberries in Mexico, in addition to California. It found regions in Mexico where the climate allowed them to grow the fruit — especially raspberries — during seasons of the year when it hadn't been feasible back home. "Our move really was for year-round product, and quality," says Reiter, who is executive chairman of Reiter Affiliated Cos.

The North American Free Trade Agreement went into effect at that same time, in 1994. But that's coincidence, Reiter says; NAFTA had very little to do with the move into Mexico. "To tell you the truth, we paid minimal attention to that," he says.

Many U.S. fruit and vegetable growers have made the same move over the past two decades. They've all done it to expand their growing season, and also to cut costs. Farmworkers in Mexico get paid very little, compared with workers in the U.S.

Reiter says that when he got to Mexico and met his Mexican partners, he discovered another reason to locate there. "They're farmers. They want to be farmers. That is their industry," he says. There's excitement about new fruit varieties, and new methods of growing crops.

Since 1992, raspberry exports from Mexico to the U.S. have gone from zero to $500 million each year. The increase in strawberry exports is similar. Total Mexican shipments of fruits and vegetables to the U.S. have increased by nine times over the last 25 years, to $12 billion a year. People in the industry say most of that increase is a result of U.S. companies setting up production in Mexico.

President Trump's criticism of trade with Mexico has unsettled the industry. He has talked about possibly taxing imports from Mexico or renegotiating NAFTA. Mexican officials have threatened to retaliate against American exports.

But Reiter says such moves would just force Americans to pay a little more for Mexican fruit. It wouldn't bring production back to the U.S.

"If you look at the magnitude of the investment in Mexico, there's no way that's coming back to California," he says. "There's absolutely no way."

He'll keep growing in Mexico, in part because it would be hard for Americans to replace Mexican production with fresh berries from somewhere else.

Yet the situation on the other side of the trade equation, for U.S exports to Mexico, is considerably different.

Those exports also have grown dramatically, but a lot of them are commodities that Mexico could buy from other places, such as corn, soybeans and dairy products.

"Mexico is the No. 1 buyer of U.S. dairy products in the world," says John Wilson, senior vice president of Dairy Farmers of America, a cooperative with 14,000 dairy farmer members.

American dairy farmers have come to rely on exports in recent years. About 15 percent of all milk is processed into products for export. Wilson's cooperative, for instance, has a plant in Portales, N.M., that receives milk from big dairy farmers in the eastern part of that state and dries it into powder. "About 38 million pounds of [milk] powder moved from the plant into Mexico last year," Wilson says. In total, the U.S. exports about $500 million worth of milk powder to Mexico annually. That's up more than 10 times from 20 years ago.

The U.S. also exports billions of dollars' worth of corn, soybeans and pork. And NAFTA is really important for most of those exports. It allows products to enter Mexico duty-free and makes American commodities just slightly cheaper than the competition, such as milk powder from New Zealand.

"Pennies do matter in the milk business," Wilson says. "It's a very competitive business worldwide, and the presence or absence of a tariff can make or break a deal."

Wilson says he doesn't know exactly how much it would cost American dairy farmers if Mexico bought less of their milk powder. "We don't even like to speculate about that," he says. But it certainly would hurt.