Accessibility links
How Fancy Cheese May Save Some Small-Scale Dairies : The Salt Because of unstable milk prices, small-dairy owners are also selling artisanal cheeses to help them stay afloat. The idea is catching on — in Iowa, the number of on-farm cheese-makers has doubled.

How Fancy Cheese May Save Some Small-Scale Dairies

How Fancy Cheese May Save Some Small-Scale Dairies 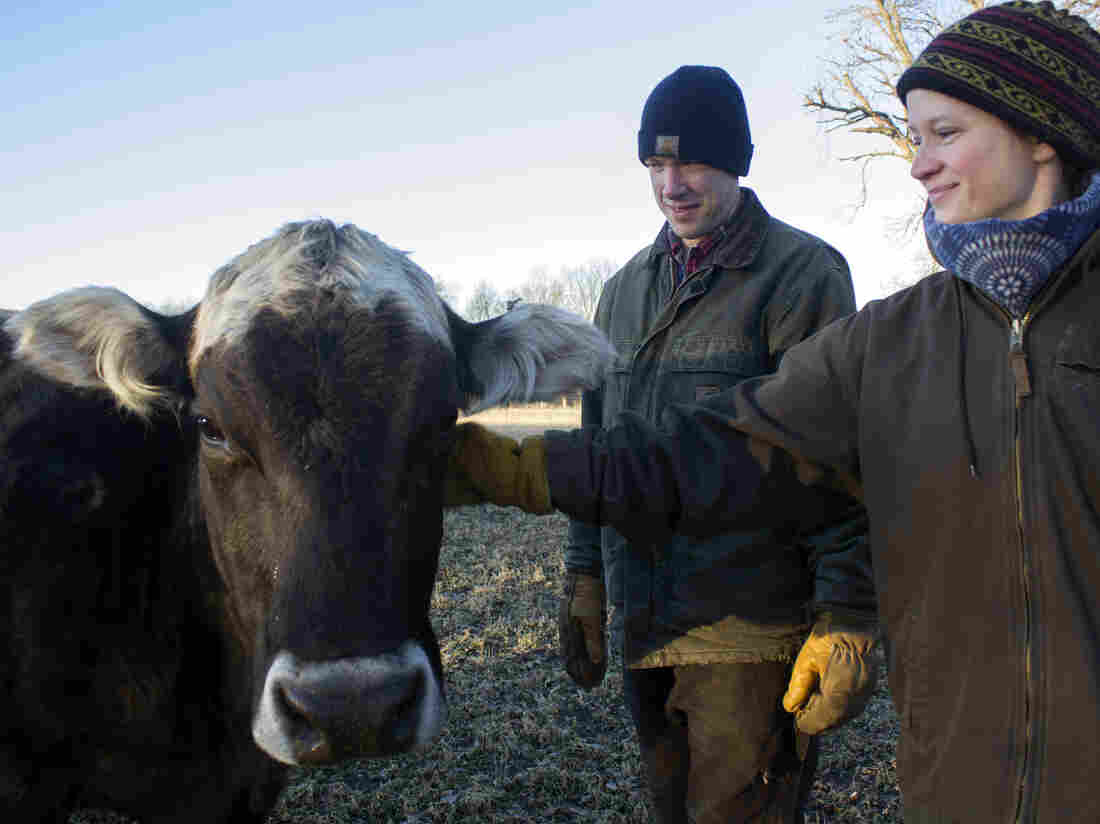 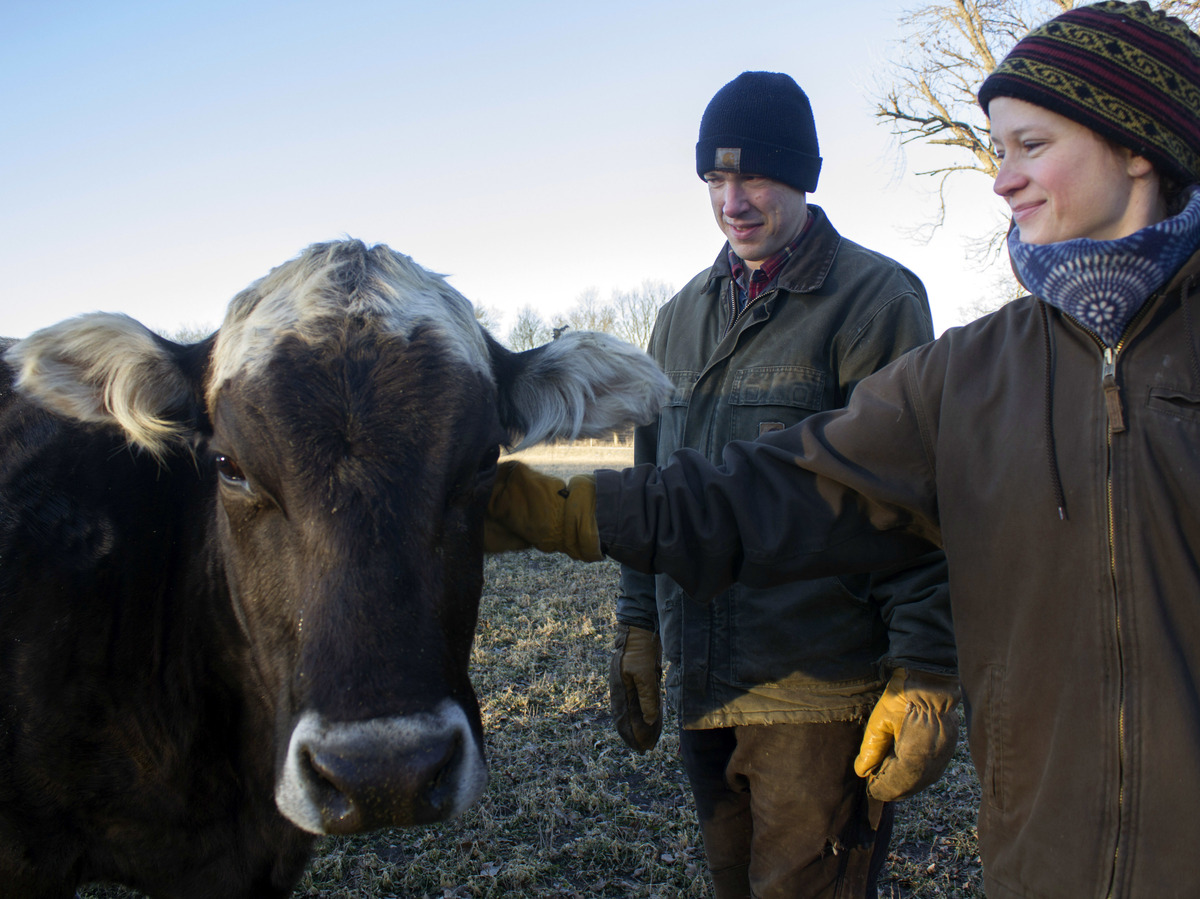 Kevin and Ranae Dietzel, owners of a small dairy herd near Jewell, Iowa, named their signature cheese after this cow, Ingrid.

On a clear, cold winter evening, the sun begins to set at Lost Lake Farm near Jewell, Iowa, and Kevin Dietzel calls his 15 dairy cows to come home.

Brown Swiss cows and black Normandy cows trot across the frozen field and, in groups of four, are ushered into the small milking parlor.

Unstable milk prices that rarely get very high have forced most dairies to grow their herds to make money on volume. In general, farmers rarely keep only one or two cows in a red barn as is so often depicted in children's books. Dietzel, who has 15 milking cows, is among the small-dairy farmers in the U.S. trying to turn a profit without having to churn out substantially more milk.

"My business plan was to add value to that milk by making cheese," Dietzel says.

Increasing demand for upscale, local foods has created a market for on-farm cheese-makers like Dietzel. Profit is not guaranteed and the upfront investment is significant, but it's the model Dietzel has chosen.

Dietzel had always been interested in dairy farming, but when he finally decided to give it a go, he found himself in central Iowa, where land is expensive and dairy herds are few. He and his wife built a cheesery with a milking parlor on one end, and through a separate entrance, a near-sterile looking room filled with stainless steel and food-grade plastic. At the entrance, Dietzel trades his warm hat and coat for a hairnet and apron and gets to work massaging curds into wheels of cheese.

His signature product is Ingrid's Pride, named for one of the cows. It's a cheese related to provolone, but made using Dietzel's own technique and featuring a unique flavor related to the grasses his cows eat. Dietzel's hand-made, small-batch processing means he can sell cheese for more than what a big company like Kraft or Cabot could.

"We have to do something that's a little bit more original and is also going to be worth that money," he says. "Hopefully, we're doing that." 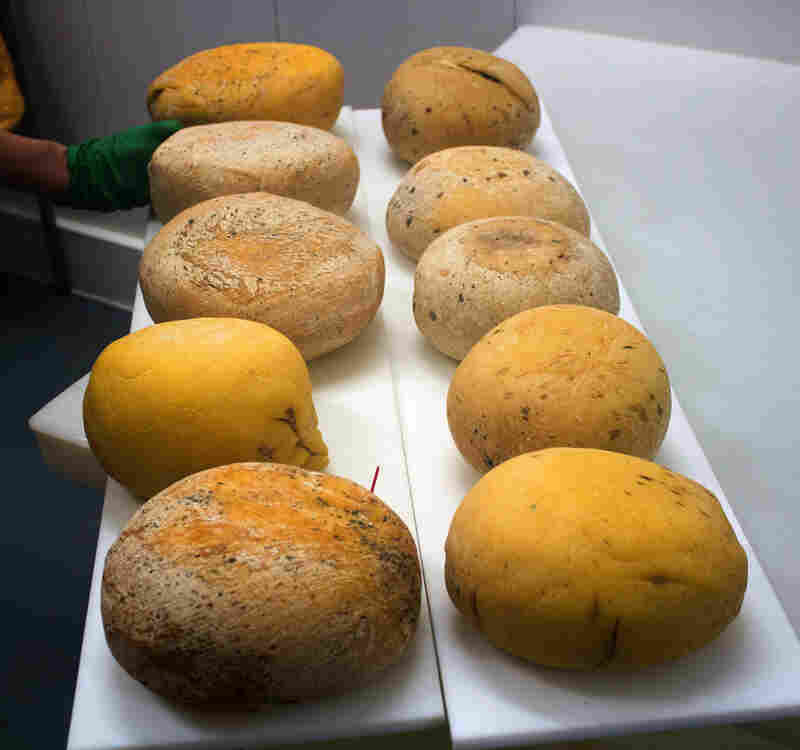 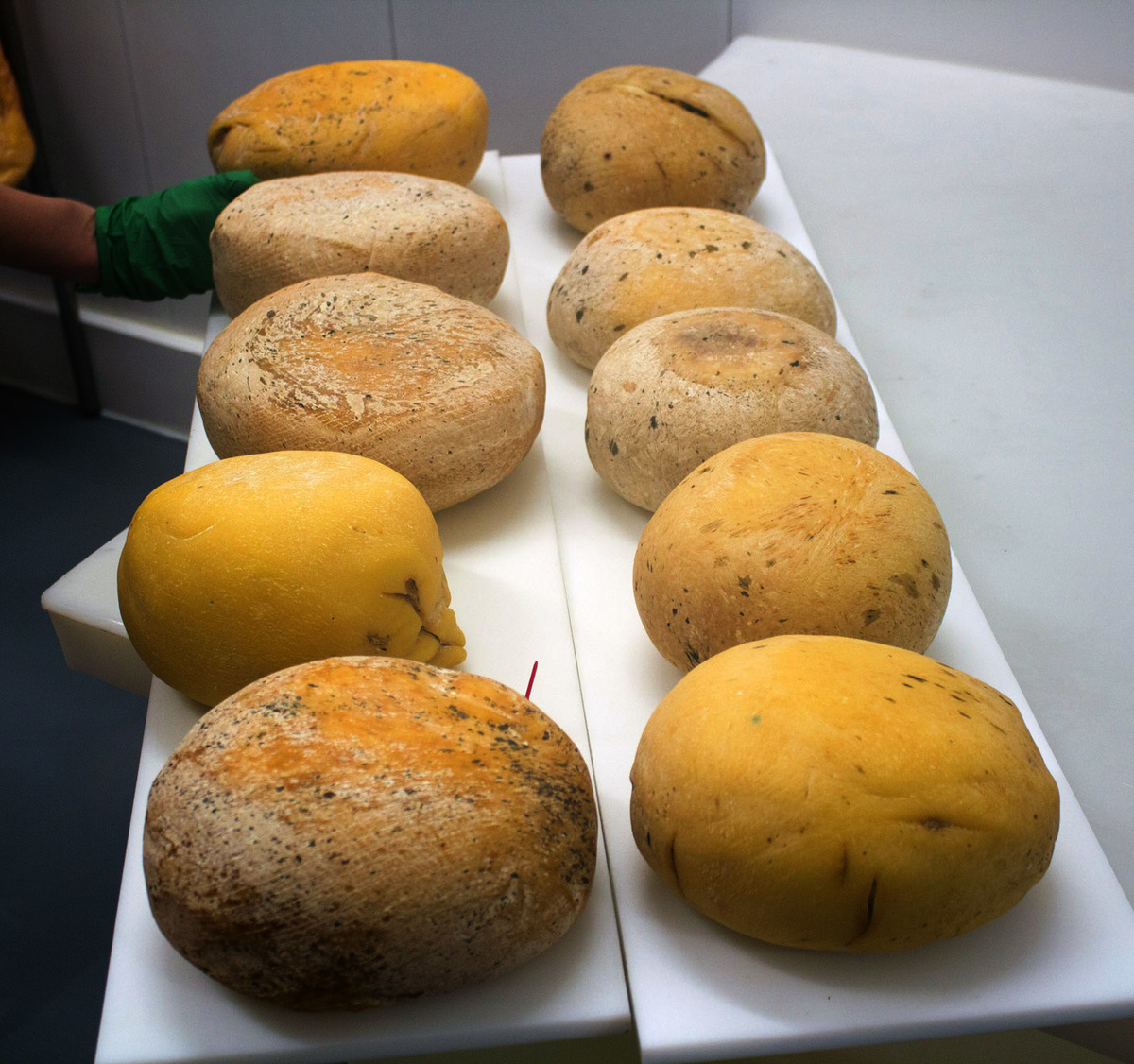 Wheels of cheese age in a climate-controlled room of the Dietzels' custom-made cheesery.

Dietzel is not the only one. Iowa State University dairy scientist Stephanie Clark says that over the past seven years, she's seen one to two new startups invest in cheese each year.

"It's amazing the history that we have in Iowa on its own," Clark says, "and then we have quite a lot of success throughout the Midwest."

The math can make sense. With a back-of-the-envelope calculation, Clark says one cow's milk might yield a farmer $13 a day. Turning that milk to cheese could gross the same farmer $105. Obviously, there are expenses beyond what a milk-only dairy has. But small, all-in-one businesses make money with cheeses that fetch a premium.

In the past 15 years, membership in the American Cheese Society — a national group of home and on-farm cheesemakers — has more than doubled to 1,700 members today.

The small storefront of The Cheese Shop in Des Moines is crowded with a cheese case, wine displays and a handful of tables for the cheese-centric lunch menu. A cheesemonger greets everyone who enters and all customers are encouraged to taste samples before buying.

Owner C.J. Bienert was enamored of the taste and variety of American cheeses when he opened the shop five years ago. He combs the Midwest for the best ones, even stocking a small amount of an apple cider-washed goat cheese from Michigan's Upper Peninsula that costs $50 a pound.

"But it sells," Bienert says with a laugh. "You buy a tenth of a pound, $5 worth, a very small little taste, and it's a treat."

Still, that's 10 times what you might pay for a simple block at the supermarket. Many of Bienert's other offerings are still special, but less expensive. Right now, he says about 70 percent of the cheeses in the shop are domestic.

"I really do believe in the next five years we'll be able to be 80 to 90 percent American artisan and we'll have at least half a dozen, if not a dozen, more producers here in Iowa," Bienert says.

The Cheese Shop also features cheeses from Missouri, Nebraska, Colorado and other regions of the country. 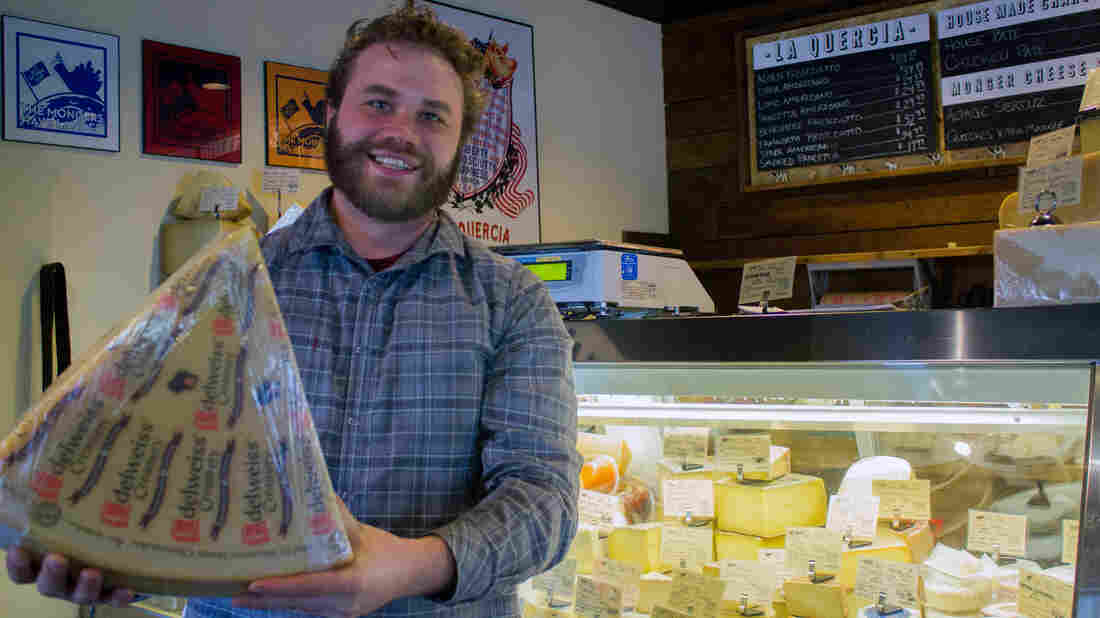 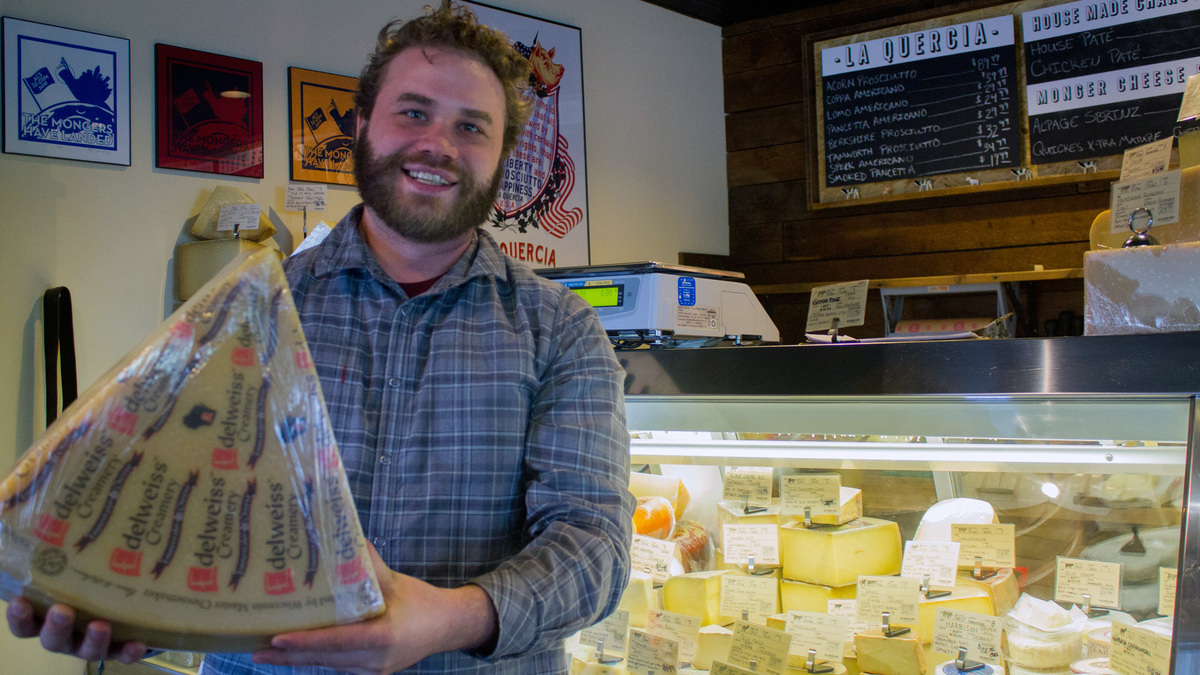 C.J. Bienert, owner of The Cheese Shop in Des Moines, says he expects to see more growth in domestic cheeses in the coming years.

On a gray day with a wintry mix falling outside, comfort foods like cheese-heavy macaroni and grilled cheese sandwiches attract a lunch crowd.

"I'm a big blue cheese fan, but anything soft and stinky is what I like," says Cassie Valek of nearby Newton, Iowa. "I like the Prairie Breeze cheddar; I think those are probably my two favorites. I'm fairly new to Iowa, so I like to get out and explore and try all of the options here."

Another customer, Parady Boatwright, says she stops in almost once a week.

"There's a lot of misconception that great cheese can only happen in one country," says Boatwright, who grew up in France but has been in Iowa for more than 20 years. "But when you come here, The Cheese Shop, it reminds you that great products can come from anywhere and are made by people who love what they do."