Accessibility links
Health Insurance Woes Add To The Risky Business Of Farming : The Salt There are many challenges to farming: It's often grueling work that relies on unpredictable factors such as weather and global market prices. But one aspect that's often ignored: health care costs.

Health Insurance Woes Add To The Risky Business Of Farming

Health Insurance Woes Add To The Risky Business Of Farming 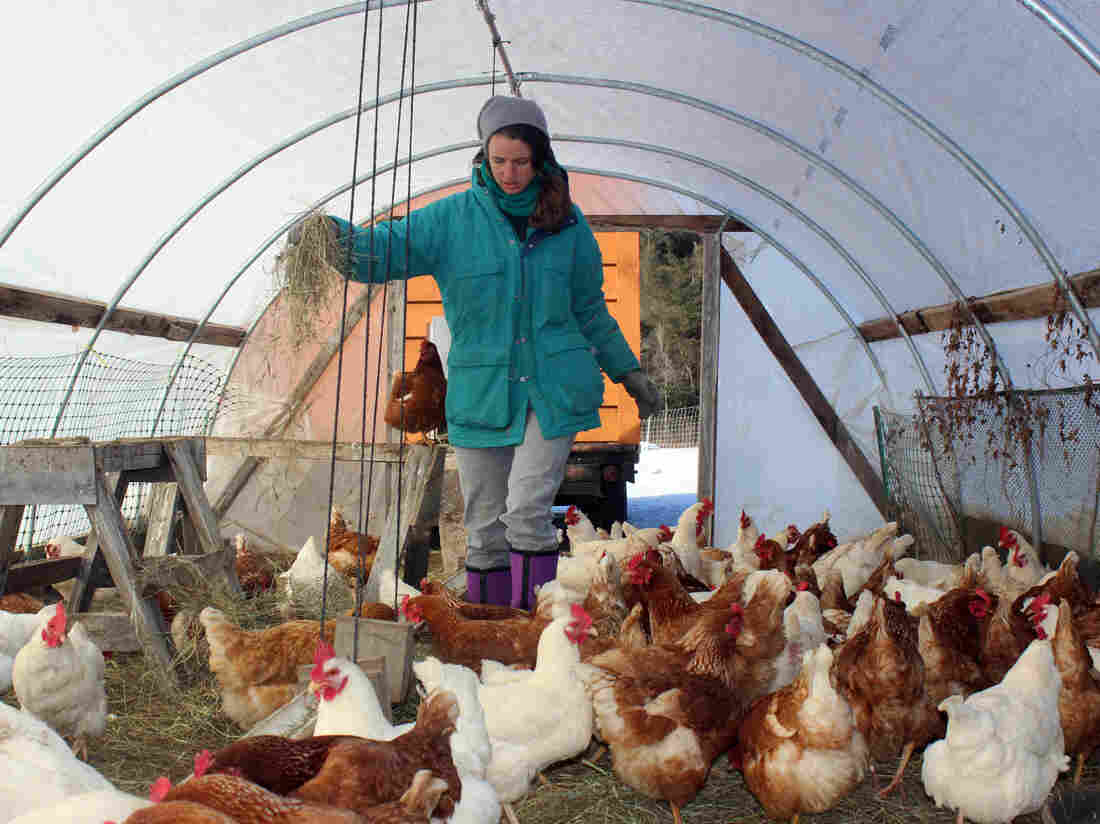 Taylor Hutchinson says having subsidized health care costs has been critical to being able to start a farm with her partner, Jake Mendell. Kathleen Masterson/Vermont Public Radio hide caption 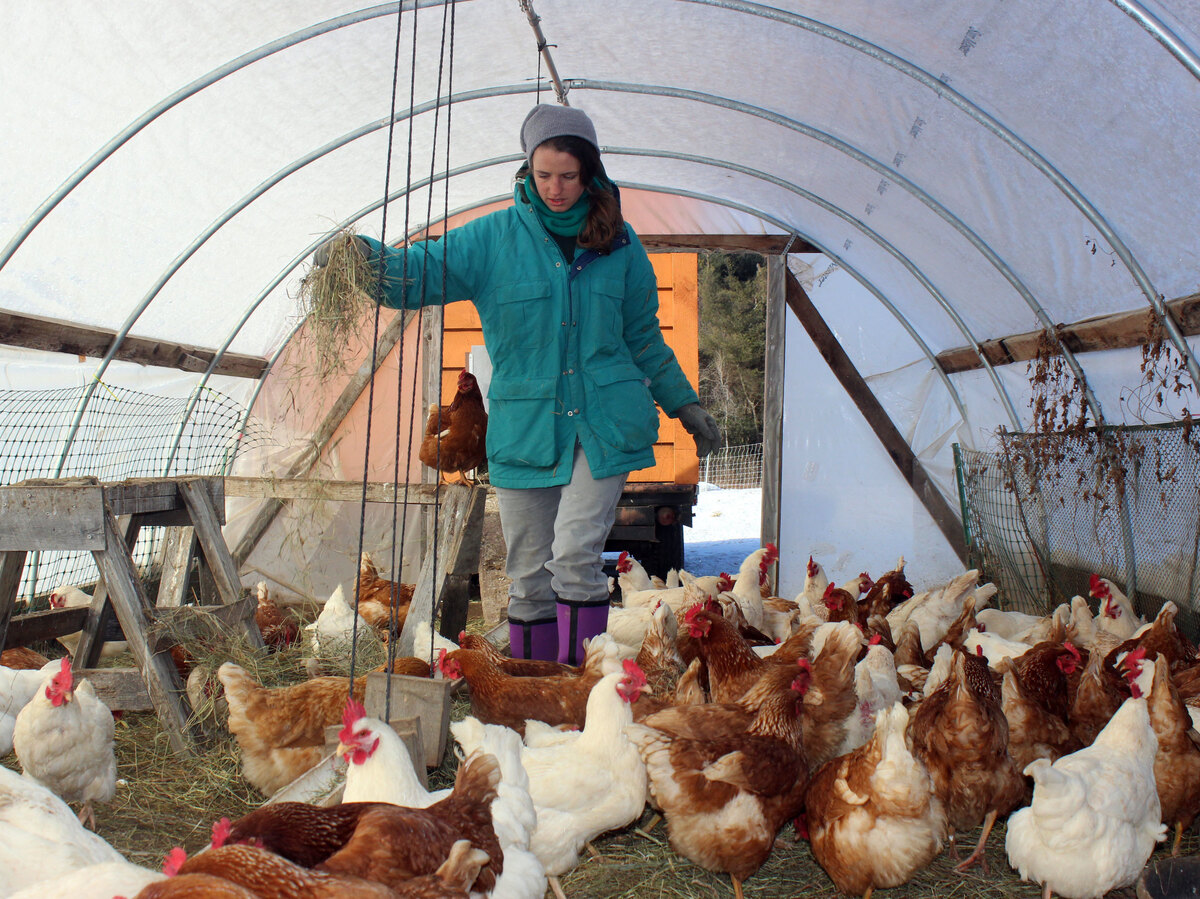 Taylor Hutchinson says having subsidized health care costs has been critical to being able to start a farm with her partner, Jake Mendell.

There are many challenges to farming for a living: It's often grueling work that relies on unpredictable factors such as weather and global market prices. But one aspect that's often ignored is the cost of health care.

A University of Vermont researcher found that nationally, most farmers cited health care costs as a top concern.

Shoshanah Inwood is a rural sociologist at UVM. She has been studying the aging and shrinking farm population, and what components are needed to build a prosperous farm economy.

Inwood says she hadn't thought about health care in particular as a factor until she conducted an unrelated survey in 2007 of farmers working the land in areas facing population growth and development pressures. The survey asked, "What are the issues affecting the future of your farm?"

"And we assumed when we got that survey back, we would get things like the cost of land, the cost of inputs, neighbors. The number one issue facing farmers was the cost of health insurance. They identified that as the biggest threat to their farm," she said.

Inwood says this held true for small and large farms: Two-thirds of commercial farmers cited the cost of health insurance as the biggest threat.

Typically, strategies to build a robust farming industry have focused on access to land, capital and changes to market infrastructure.

"But then you ask people, 'Well, how many people know a farmer that has an injury? Or a farm family that has a chronic health issue? Or a mental health issue?' And everybody's hand goes up," Inwood said. "And that's the one issue we really never talk about, are some of those social needs that farm families have."

While it may be underrepresented in farm planning discussions, on the farm, families are talking about it.

Take Taylor Hutchinson and Jake Mendell. The two fell in love with farming — and each other — on a small educational farm in California. When the two decided to take the plunge and start their own farm, they decided to head back east to Jake's hometown area.

Over the past three years they've transformed three acres of his family's land in Starksboro, Vt., into a small farm business, selling vegetables, eggs and some meat through Community Supported Agriculture (CSA).

Access to free land puts them well ahead of many starting farmers, financially. But one thing they didn't initially factor into their business budget was health insurance.

"We both came of age at the beginning of the Affordable Care Act. It's not something that we've really had to think about, paying in full for a health insurance plan," says Mendell.

By "coming of age," he means he aged off his parents' health insurance at 26. Mendell was able to stay on his parents' plan beyond college under a provision in the Affordable Care Act. Then he switched onto a heavily subsidized plan through Vermont Health Connect. 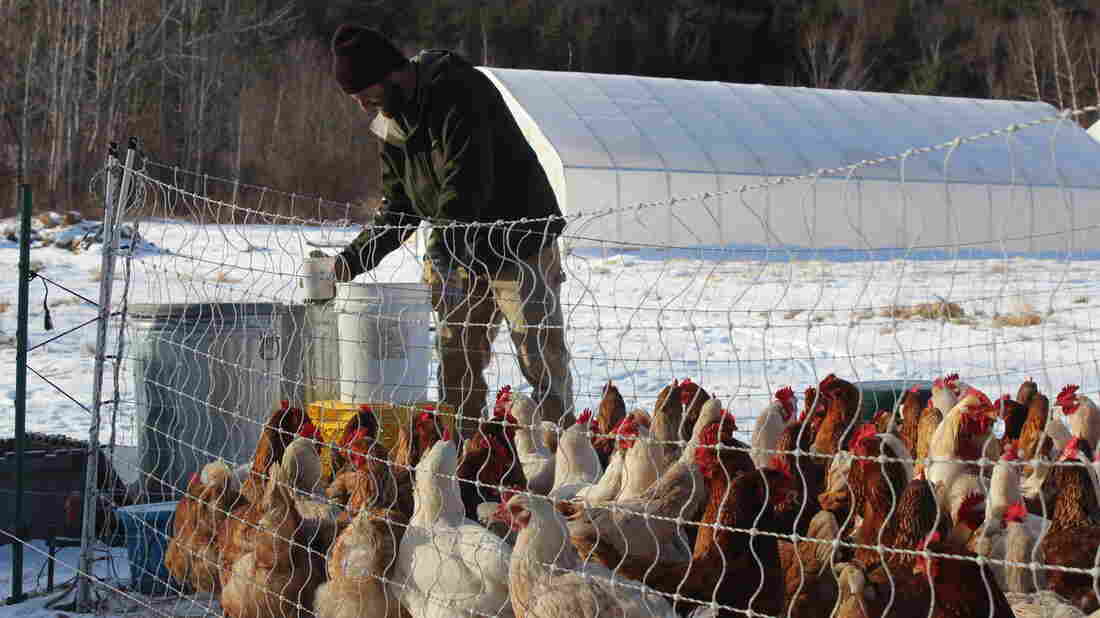 Jake Mendell says he chose farming because he's passionate about it, but it's challenging to make a viable living. Kathleen Masterson/VPR hide caption 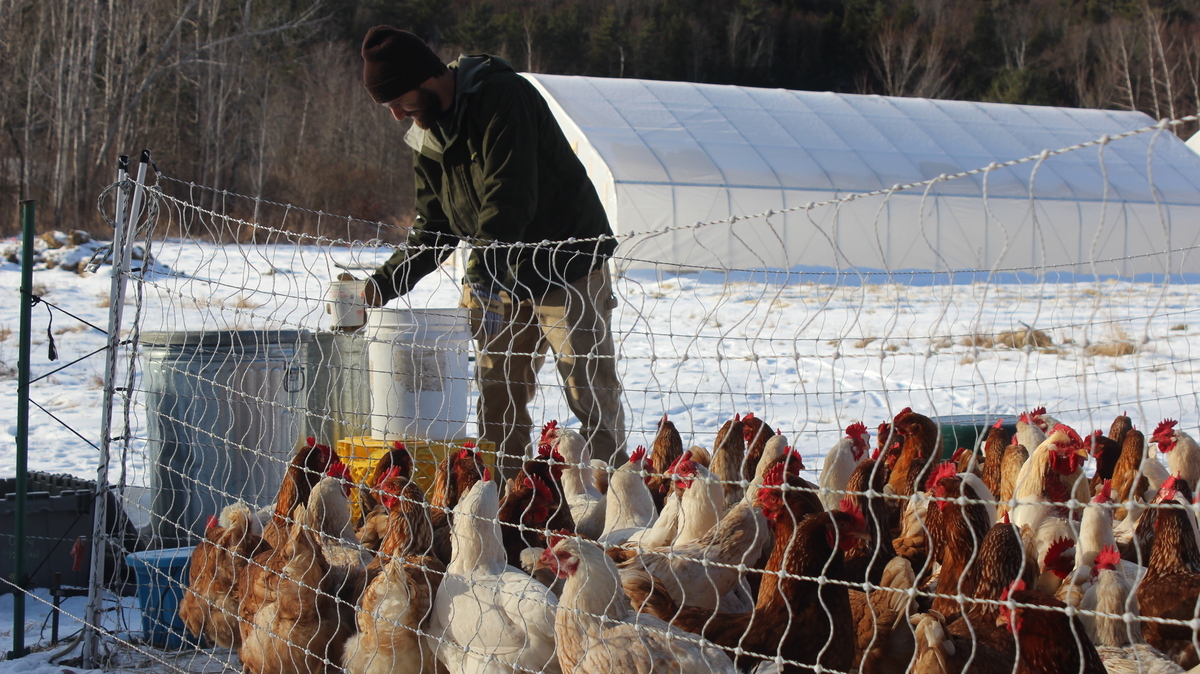 Jake Mendell says he chose farming because he's passionate about it, but it's challenging to make a viable living.

His partner, Taylor Hutchinson, is covered by Medicaid because her income falls just below the threshold.

"It's a very fine line for me personally, that I'm skating under right now," Hutchinson said.

With government assistance, right now health insurance is not among their highest expenses. But that all could change. If their income grows, Hutchinson would no longer eligible for Medicaid. Or if health care policy changes, their subsidies could go away.

Both scenarios would have very real impacts on their farm business.

"It's concerning now that, I mean, I just don't know how we could manage $800 a month, when right now it ends up being combined $60 a month," says Mendell.

The whole situation gets even trickier if or when the couple were to get married. That act alone would bring their shared income above the Medicaid line, meaning they'd have to pay a significantly higher price for health insurance. And then — someday — there are kids to consider.

"Something that I think about is when we have kids, in order to be able to afford the medical bills for that, as well as daycare, it is very likely that I will be stepping back from the farm," says Hutchinson. "It's something that I'm thinking about now. Would I get a part-time job? Or would I try for a full-time job that I could get benefits that would cover us all?"

That calculation is not unique. Nationally, slightly more than half of farmers also work off the farm. Historically it has been women who work two jobs, but that dynamic is changing as more women are getting into full-time farming.

Inwood says the need to work another job just to support the farm is a real roadblock to growing a "prosperous, bright farm population." And it comes at a time when the overall farm population in the U.S. is aging and shrinking.

"We need folks who have strong backs, who are able to do work," Inwood says. "And one of the things that happens is when you're young, that tends to intersect with the age when you're really ready to have children, that's when health insurances concerns really start to enter into people's minds."

As recently as 2012, the number of new farmers was down about 20 percent from five years earlier. There are many factors — financial and otherwise — that make becoming a farmer incredibly challenging.

But Inwood says one key learning from her research is that advisers who work with farmers need to be better prepared to help them navigate the ever-changing world of health insurance.

"A lot of farm viability planning and farm business planning, they generally will tend to mention health insurance, but there's no planning for it," says Inwood. "None of the workbooks currently really talk about how are you going to do this ... How does having health insurance fit into your overall farm plan?"

Back on the farm in Starksboro, Hutchinson says if it weren't for the Affordable Care Act, she likely wouldn't have health insurance.

"I think that the subsidies have been crucial for us to have been able to start our farm, and to be able to keep our personal costs ridiculously low for the first few years," she says.

And she says that in a recent meeting, many farmers mentioned that they're considering getting an off-farm job or even liquidating the business because they're worried that the health insurance situation could change.