Accessibility links
Egypt's Beloved Koshary Is A Modern Mystery In An Ancient Cuisine : The Salt Widely considered the national dish, no one knows quite where it came from. But you can find this flavorful carb-packed treat anywhere from mama's kitchen to food carts and elaborate eateries.

Egypt's Beloved Koshary Is A Modern Mystery In An Ancient Cuisine

Egypt's Beloved Koshary Is A Modern Mystery In An Ancient Cuisine 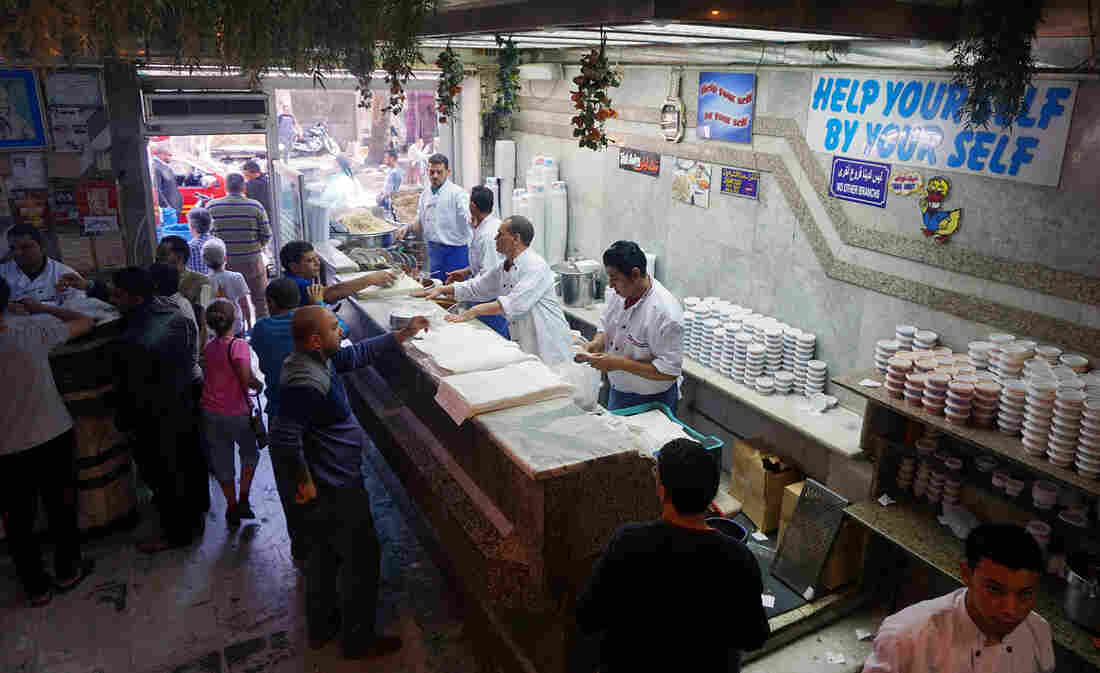 The assembly line set-up at Koshary Abou Tarek helps staff to keep up with the flood of orders at lunchtime. Amy E. Robertson for NPR hide caption 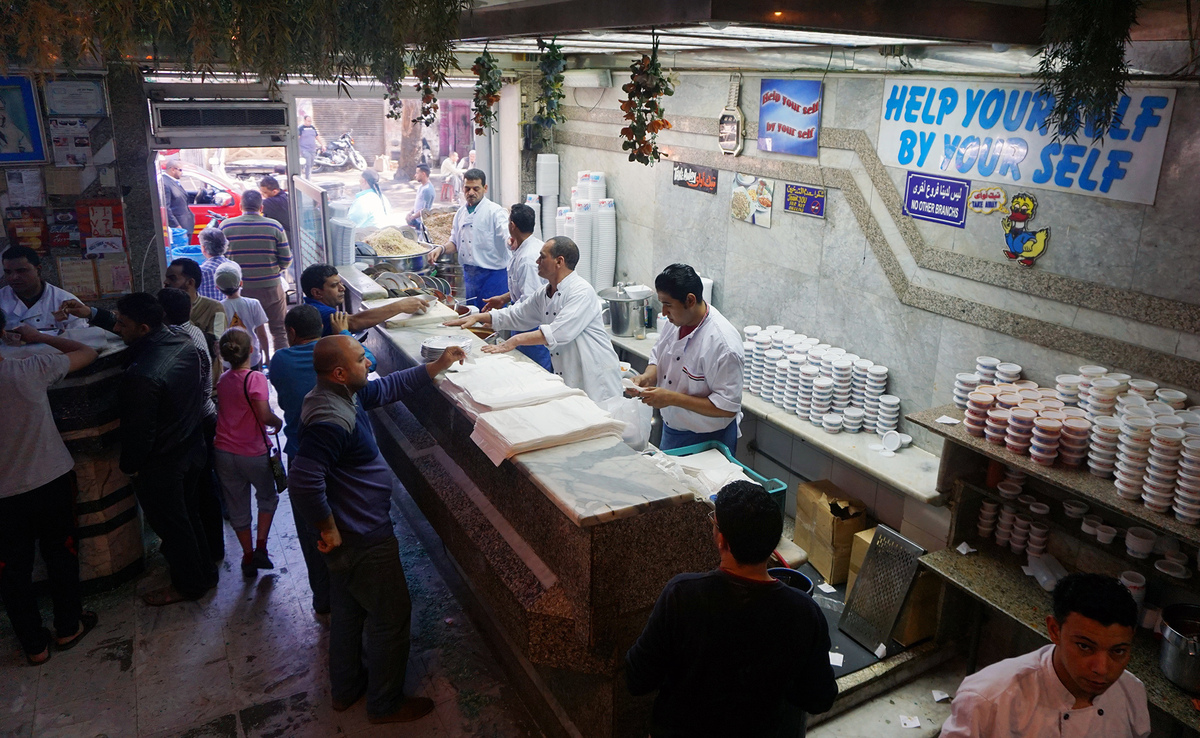 The assembly line set-up at Koshary Abou Tarek helps staff to keep up with the flood of orders at lunchtime.

Koshary is to Egyptian cuisine as the pyramids are to its culture. Emblematic. Iconic. Beloved.

Also spelled koshari or kushari (those pesky transliterations from Arabic script!), it is widely considered Egypt's national dish. Rice, lentils (black or brown), chickpeas and pasta are cooked individually, then tossed together and topped with cumin-scented tomato sauce and crunchy fried onions. Things get kicked up a notch with condiments of garlicky vinegar and a peppery hot sauce called shatta. Heavily laden with carbs and calories, a plate of koshary fills up even the hungriest of stomachs for just a few Egyptian pounds.

Notwithstanding its enormous popularity, koshary is a relatively recent invention of this ancient civilization.

"I had never eaten or known of koshary in Egypt before 1952, when I went to school in Paris," says Claudia Roden, an award-winning cookbook author and food historian who was born and raised in Cairo. "No one ever mentioned the recipe when I was researching my first book almost sixty years ago. Other people, who like me left Egypt in the fifties, have also told me that they did not remember it. Of course, it might have been sold in some quarter of Cairo that that I never went to."

Its cousin, mujaddara, made of rice, lentils and fried onions, has long roots in Arab culture, and Roden guesses that koshary evolved from that culinary classic. She adds, "It's possible that the addition of short macaroni is an Italian influence." 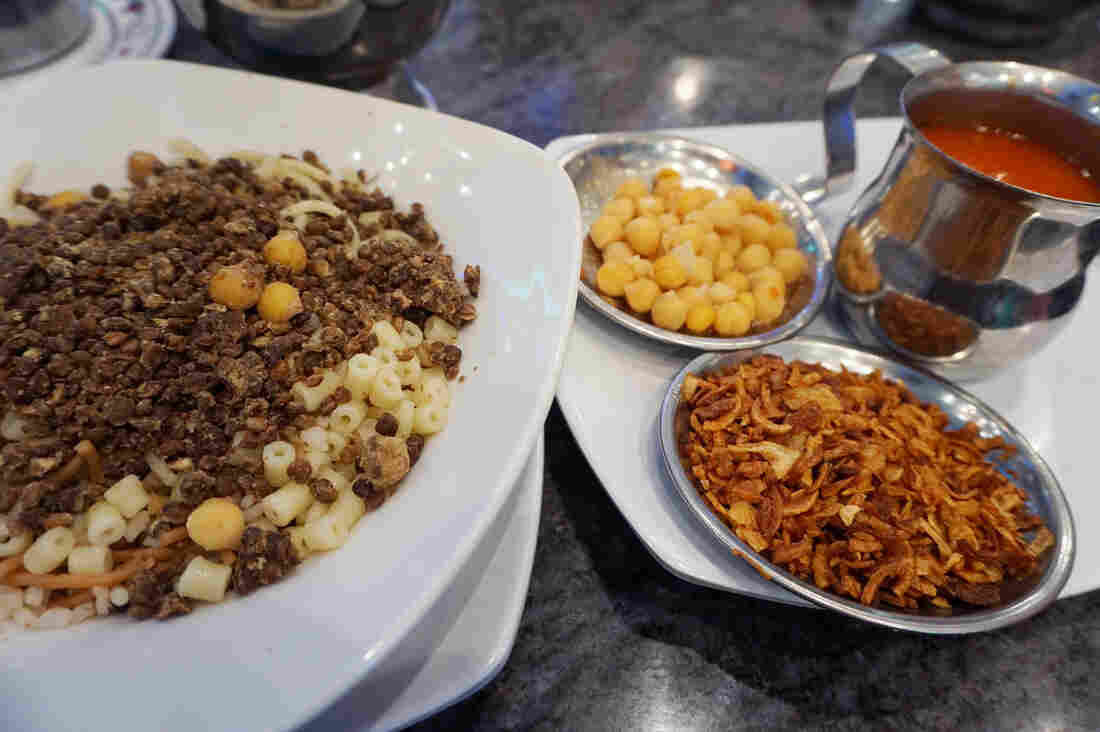 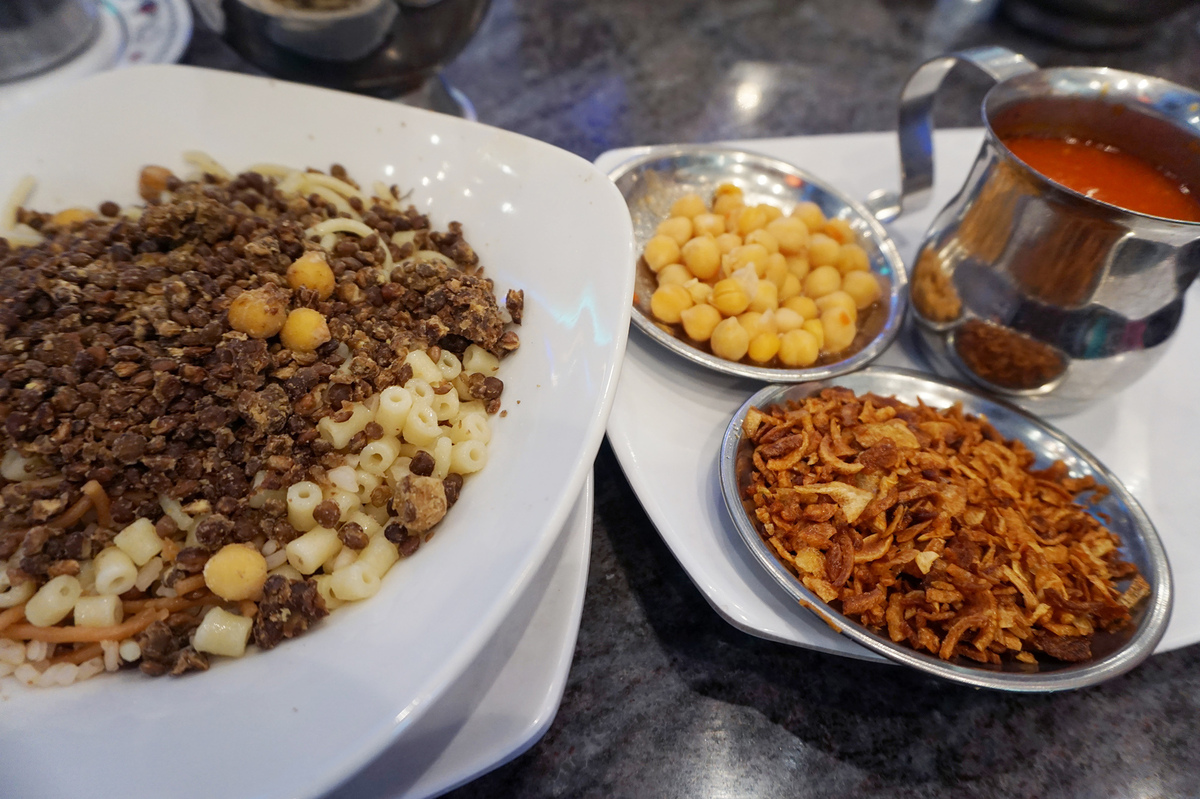 Cheap and filling, hearty plates of rice with lentils and pasta are topped with chickpeas, tomato sauce and fried onions.

Pasta is called maacarona in Egyptian Arabic, which at first glance lends credence to the theory that the Italians brought their macaroni to the dish. "On the other hand," Roden points out, "pasta is an Arab thing mentioned in medieval culinary manuscripts."

It may be a question of the chicken and the egg.

While no one can say for sure where koshary came from, everyone has an opinion on where to eat it. For Ahmed Hameed, it's at his mom's. But as a private tour guide in Cairo, he has found that the famed Koshary Abou Tarek restaurant makes a fine substitute.

"Koshary is a hard meal to cook as it consists of several elements, each of which should prepared separately," says Hameed. "It's one of the most traditional meals in Egypt, and food in general is an experience that you shouldn't miss while traveling. The recipe is a secret formula that can be different from one restaurant to another. Abou Tarek has his own recipe."

From the locals thronging the restaurant for both sit-down and take-away, it's clear that Hameed is not the only one who favors Abou Tarek's. Cook staff are lined up behind a long counter, dishing up plates and take-away packages at a breakneck pace. What started as a food cart in 1950 is now a bustling, four-story restaurant. Foreigners are led to the top floor, where English-speaking waiters are on staff and an oversized portrait of Abou Tarek smiles down on customers. Portions are generous, and prices range from about 50 cents for a small bowl to a dollar and change for a large. Tucked away on a narrow side street just a couple of blocks from the Egyptian Museum, Koshary Abou Tarek is a convenient pit stop during a day of sight-seeing. 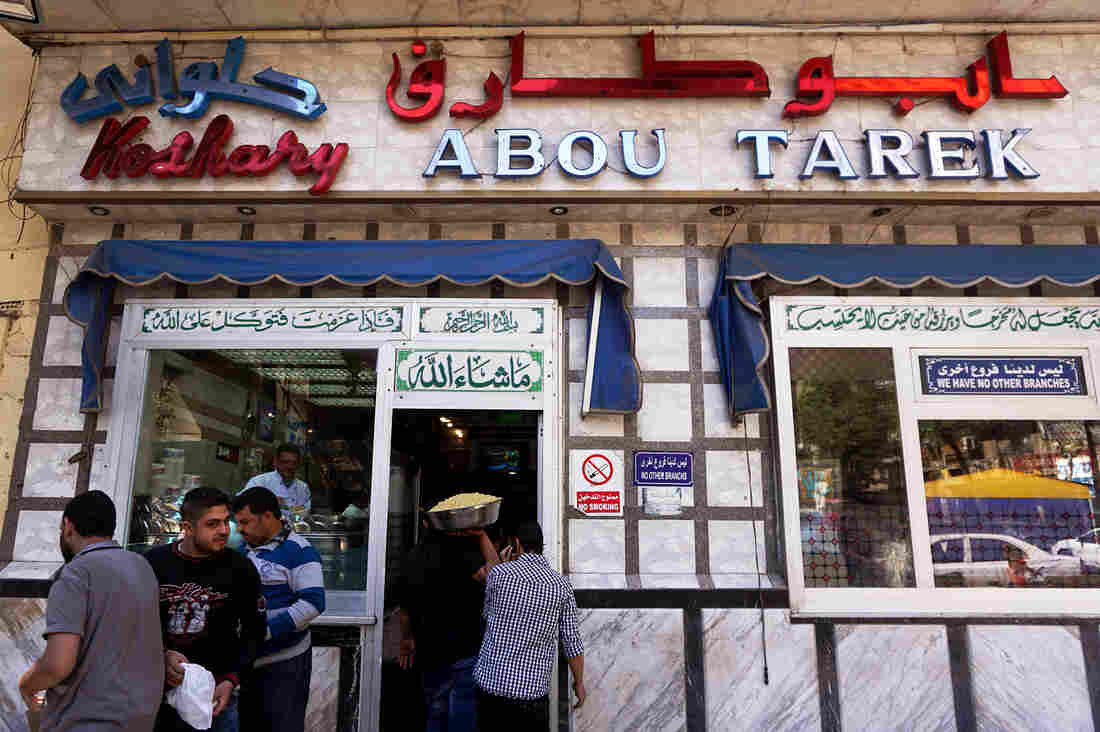 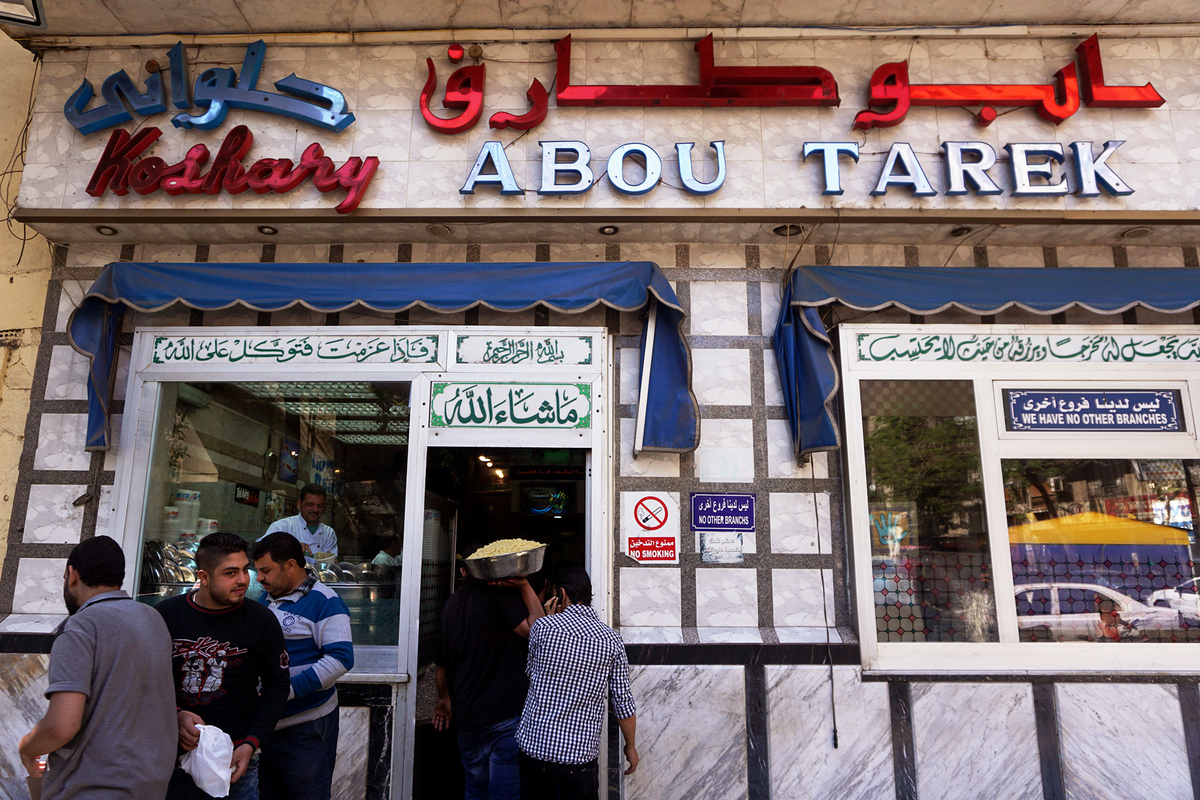 Koshary Abou Tarek, on Maarouf Street in downtown Cairo, is beloved by locals and foreigners alike.

Ali Zayed, an Egyptian living and working in Lebanon since 2003, makes sure to tell his Lebanese friends to try koshary when they travel to Egypt. "I miss koshary when I am in Lebanon," he says. "I eat it two or three times a month when I visit Egypt." But while "mama" makes a tasty koshary, Zayed confesses that he prefers to eat it out. "I like to eat it outside the home and when I'm alone, because I put too much hot sauce and...." Zayed puffs out his cheeks and fans his face to demonstrate the perils of adding a lot of spice. He adds, "If I am going to be out all day, koshary is the No. 1 food I want to eat."

Not every koshary joint is as elaborate as Abou Tarek's. Many are hole-in-the-wall eateries and others are simple food carts. Guys on bicycles deliver individual portions of it around town, even famously pulling up in Tahrir Square in 2012 to feed hungry protesters.

"I was surprised to find it everywhere when I went back after 32 years," Roden says. "I love it and make it myself. When I visit now I always eat it."