Accessibility links
Ice Fishing Has Its Rewards, But Bring A First Aid Kit : The Salt Every winter people flock to the frigid lakes of Canada and the northern U.S.A. to ice fish. According to a new study, thislow and seemingly harmless sport has some risks of injuries. 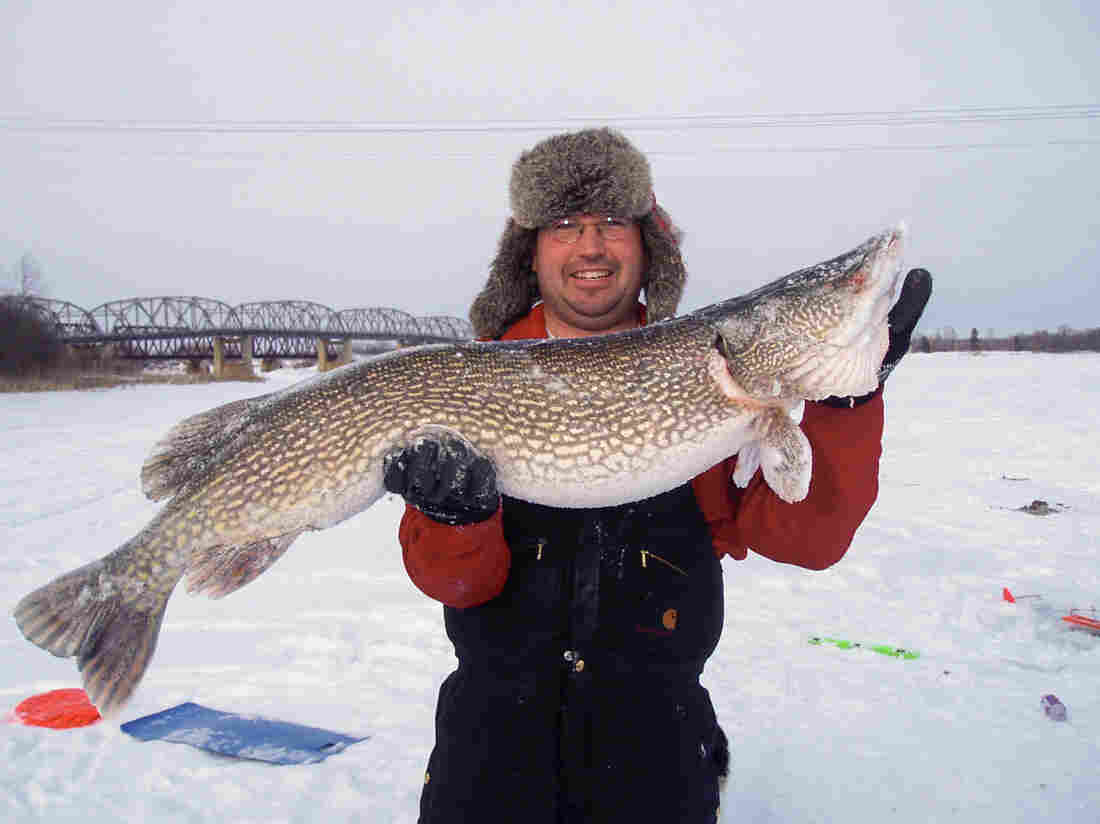 Tom Hansen, a regular ice fisher in Lake of the Woods, Minn., with a pike he caught earlier in the day. Joe Henry hide caption 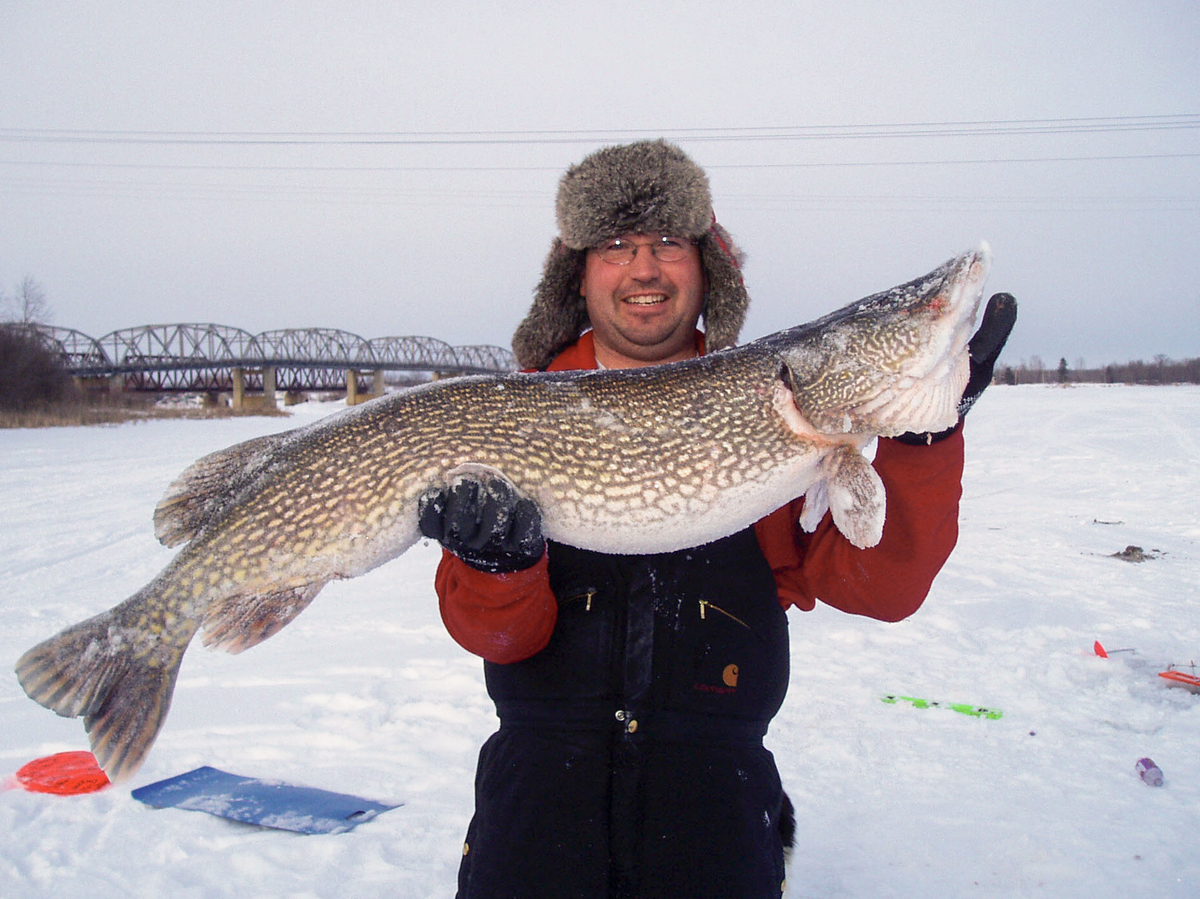 Tom Hansen, a regular ice fisher in Lake of the Woods, Minn., with a pike he caught earlier in the day.

When winter freezes Lake of the Woods in northern Minnesota, the landscape becomes dotted with sturdy wooden or metal shacks and canvas shelters. Inside them, people are ice fishing.

The sport attracts people to the frigid winter lakes in Canada and the northern United States. Some take it seriously enough to partake in official competitions. But for most people, it is a way to enjoy time with family, friends and perhaps a bottle of schnapps, and ultimately a delicious fish dinner from the day's efforts.

But the seemingly harmless sport, which often involves hours of patient waiting in freezing temperatures, has risks of injuries, according to a new study. And those risks are higher than for traditional fishing, the study finds. Researchers looked at a public database of emergency department reports across the United States, referencing 8,220 patients who suffered either traditional or ice fishing-related injuries.

The researchers found that 35.6 percent of patients had small injuries, like cuts and hook punctures. But close to half the patients – 45.9 percent, to be precise – had muscle or bone injuries, like sprained ankles and broken arms. Injuries from falling in the water or drowning affected only 4.7 percent of people who had been ice fishing, but that's much higher than the 0.3 percent of the traditional fishing patients. Another 4.7 percent of ice fishing-related injuries were burns, which only occurred in 0.7 percent of people who fished traditionally, the American Journal of Emergency Medicine study found. 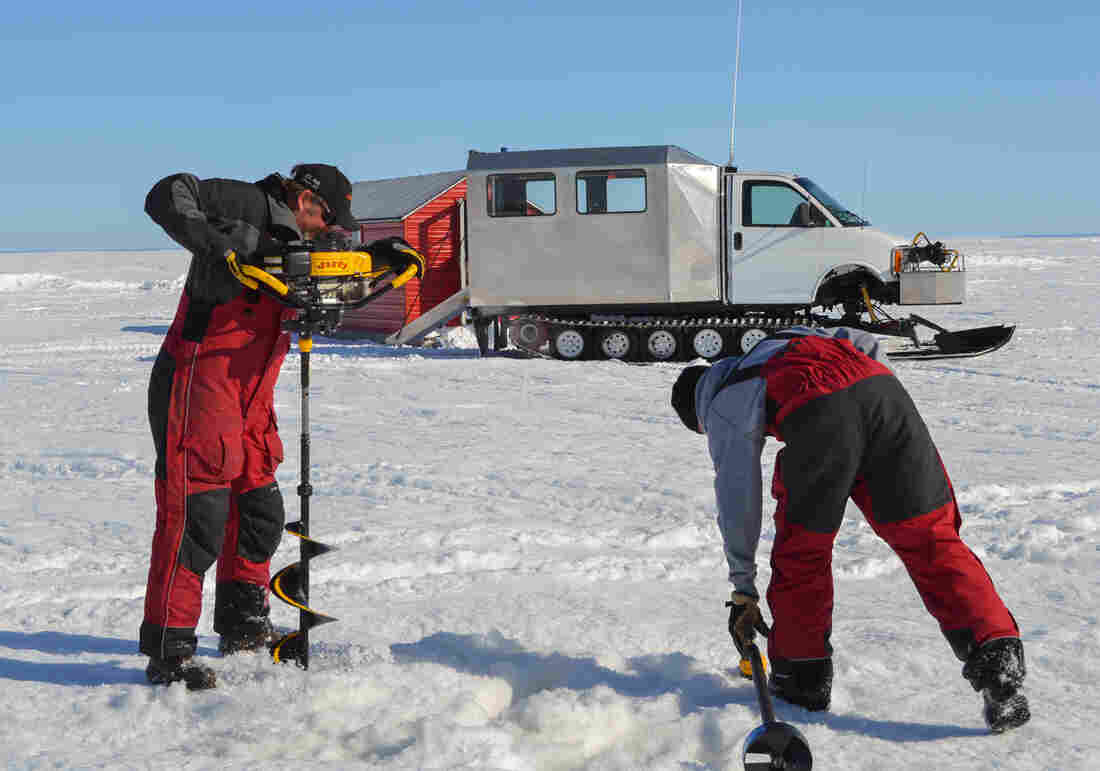 Anglers must drill holes into ice that's often more than two feet thick. They set up their fish houses over these holes. Joe Henry hide caption 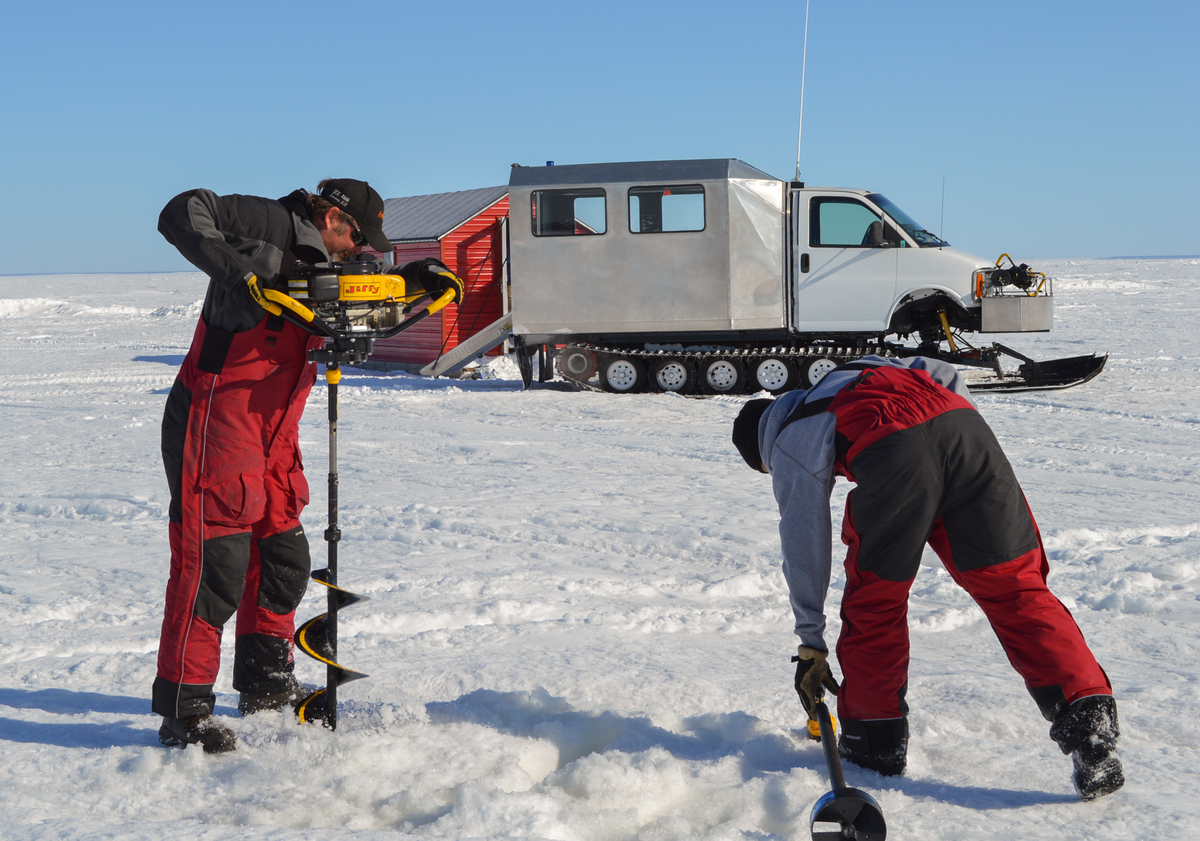 Anglers must drill holes into ice that's often more than two feet thick. They set up their fish houses over these holes.

"That was the surprise — not only did we see an increase in drowning and cold injuries from the water, but they occurred at the same rate of hot thermal injuries," says Dr. Cornelius Thiels, general surgery resident at Mayo Clinic in Rochester, Minnesota and lead author on the study.

He speculates that the burn injuries come from the heaters in the "fish houses" where people hunker down to fish. The injuries associated with cold water are probably more common because people venture onto the ice too early or too late in the ice fishing season, when the ice is thin — all patients in the database who came into emergency rooms after falling in did so in December or March.

In fact, because fish are more active in early and late ice fishing season, ice anglers will even use a wooden plank as a bridge to get to the main slab of ice during this time, says Joe Henry, executive director of tourism for Lake of The Woods County. "That's when people fall through."

However, he suspects that the injury numbers reported in the study are likely lower than they would have been a couple decades ago. "Most people think you're out on [the ice] with a bucket and a stool on a frozen lake, freezing your butt off," he says, which is how it used to be 20 years ago, before using fish houses became common.

"Had the same study been done 30 years ago, I bet you'd see some hypothermia," Henry says. "Now, fish houses make things safer," he adds. "If you drop a fish in the water and dip your arm in to grab it, it's no big deal," he says. "If you were out in the cold and wind, it might be a different story."

Today's fish houses can stretch up to 200 square feet. Some are made of wood or metal and rolled on wheels or dragged onto the ice with a truck or a snowmobile. Others are less permanent, made of canvas or plastic and built on the spot. Regardless, the shelters are dropped onto a pair of holes drilled into ice at least two feet thick. They're occasionally outfitted with electric lighting, bunk beds, an oven and a stove to cook the day's catch. Some even have roof-bound solar panels that function as power sources. Electric heaters often complete the refuge, bringing temperatures up to a cozy 70 degrees Fahrenheit. Henry says many people equip their fish houses with carbon monoxide detectors to monitor levels that could be heightened by the heaters. 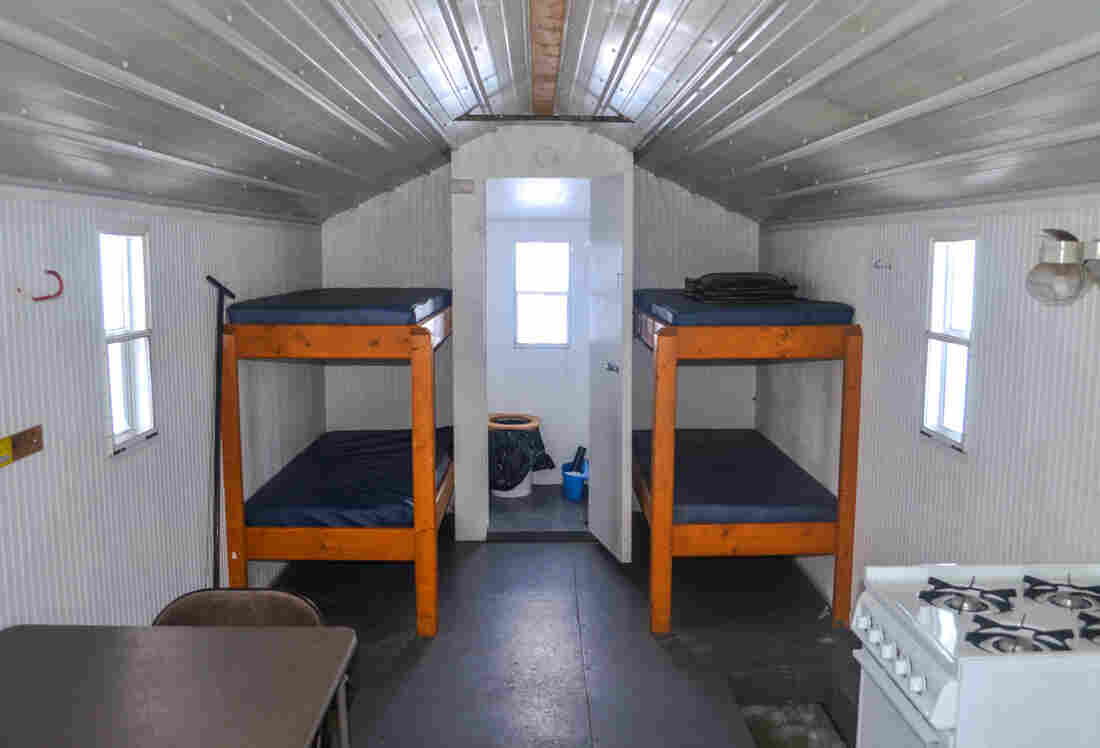 Inside a sleeper fish house. Houses like this allow ice fishers to stay out on the ice for days. Joe Henry hide caption 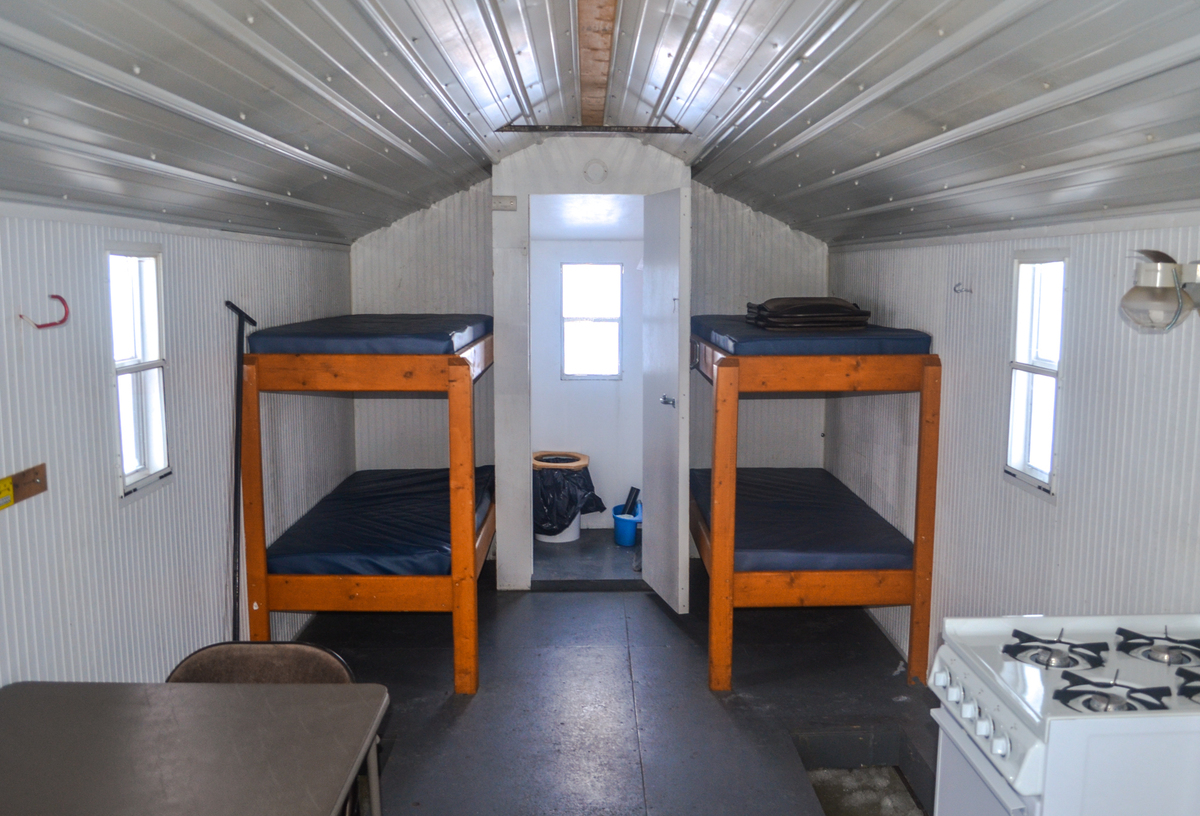 Inside a sleeper fish house. Houses like this allow ice fishers to stay out on the ice for days.

Henry also adds that he is not surprised by the number of people with burns in the study. "[Heaters] get pretty darn hot, and you have to give it a few minutes after you turn it off." It's easy to get burned, he says, even "if you bump it."

In his over 20 years of ice fishing experience, Henry has heard of incidents from drownings to gas explosions on the ice. On the overall number of ice fishing injuries shown in the study, Henry was "surprised they aren't higher," but says they can be avoided with simple safety precautions.

Being careful not to slip or burn yourself is common sense, but Henry says ice anglers remind each other to travel with a partner, crack a fish house window to prevent carbon monoxide poisoning, and have ice picks on hand to use to get out of the water if the ice breaks.

But the risk of injuries doesn't seem to stop the ice fishing crowd from flocking to frozen lakes each winter. In Minnesota, Henry says people fill their buckets with walleye, sauger, perch, crappies, northern pike, and an eel-like fish called eelpout.

The walleye and sauger are the most delicious, he says. "They're very mild, very flaky, and very tasty."

After a fish is pulled through the ice, it's usually tossed into a bucket with some snow to keep it chilled — but not frozen. At the end of the day, fishers take their haul back home to prep for dinner.

"First you'd filet your catch," explains Nick Painovich, owner of Zippel Bay Resort on Lake of the Woods. After deboning the fish and separating the meat from the skin with an extra sharp knife, Painovich likes to grill his fish a few minutes on each side with a little lemon and pepper. "It's very healthy and goes well with a bread stick and some fried potatoes."

Others prefer to batter their bucket of fish. "I like to dip it in eggs and seasoned flour and finely ground Ritz or saltine crackers," says Robbie Johnson, who owns Walleye Retreat, also located on Lake of the Woods. He spoke with The Salt by phone after spending a morning catching a bucket of walleye and sauger that he planned to fry for lunch. "It's nice to have just a fine batter, just a little bit of crust after you fry it in some peanut oil on a cast iron skillet." He likes his fish with fried potatoes and baked beans. "You can't beat that."

Though it used to be considered a junk fish, Johnson, Henry, and Painovich say eelpout is now considered "poor man's lobster." They say the best way to eat it is to cube the meat, boil it in 7-Up soda or just salt water, and dip it in melted butter. "Twenty years ago, fishermen who caught eelpout would toss it out on the ice for the bald eagles to eat," Henry says. "Now, people have realized its good eating." He says it has a cod-like flavor.

"It's all about the eating and the memories," Painovich says. "What makes the whole experience great are stories. Like, 'the fish fell off in the hole and I got wet up to my shoulder.' Those make the experience of eating the fish that much better."

But the dangers of ice fishing can't be dismissed, as the study shows, says Henry. So, he and Painovich agree that it is important to inform anglers how to be safe on ice, and keep them abreast of the day-to-day ice conditions. It's a good way to ensure that people return every year for this winter ritual without the risk of ending up in the hospital, they say.