Accessibility links
Could A Bumblebee Learn To Play Fetch? Probably : The Salt Scientists found that bumblebees are nimble learners, especially when there's a sugary reward at the end. No wonder they're such good pollinators. 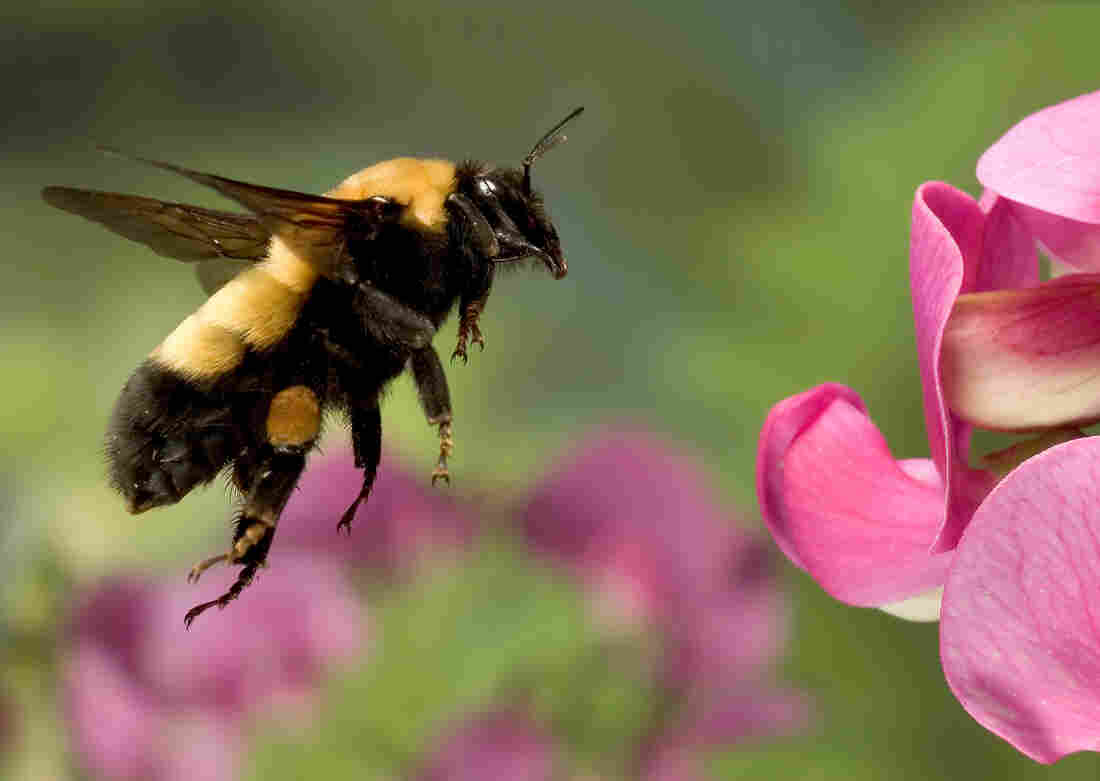 Bumblebees have 100,000 times fewer neurons than humans do, but they can learn new skills quickly when there's a sweet reward at the end. Michael Durham/Minden Pictures/Getty Images hide caption 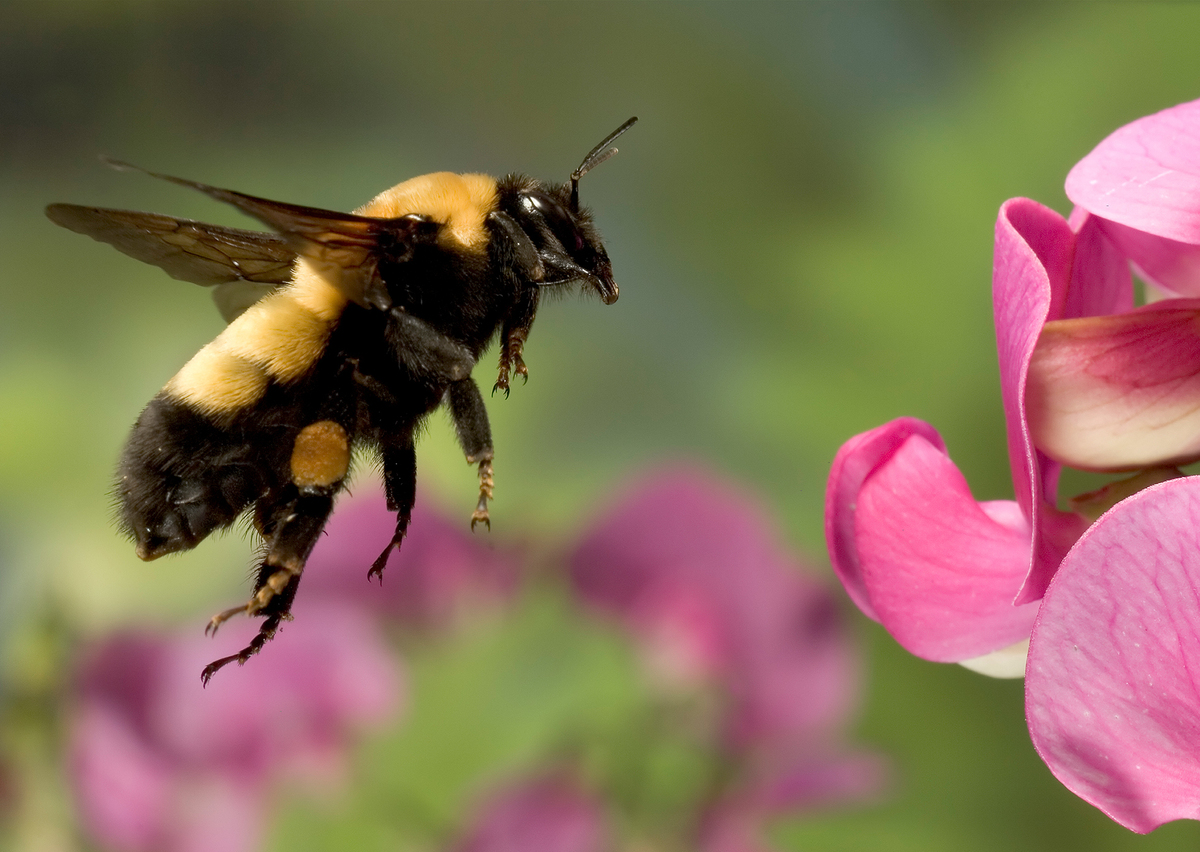 Bumblebees have 100,000 times fewer neurons than humans do, but they can learn new skills quickly when there's a sweet reward at the end.

Initially, Clint Perry wanted to make a vending machine for bumblebees. He wanted to understand how they solve problems.

Perry, a cognitive biologist at Queen Mary University of London, is interested in testing the limits of animal intelligence.

"I want to know: How does the brain do stuff? How does it make decisions? How does it keep memory?" says Perry. And how big does a brain need to be in order to do all of those things?

He decided to test this on bumblebees by presenting the insects with a puzzle that they'd likely never encounter in the wild.

He didn't end up building that vending machine, but he did put bees through a similar scenario. Perry and his colleagues wrote Thursday in the journal Science that, despite bees' miniature brains, they can solve new problems quickly just by observing a demonstration. This suggests that bees, which are important crop pollinators, could in time adapt to new food sources if their environment changed.

As we have reported on The Salt before, bee populations around the world have declined in recent years. Scientists think a changing environment is at least partly responsible.

Perry and colleagues built a platform with a porous ball sitting at the center of it. If a bee went up to the ball, it would find that it could access a reward, sugar water.

One by one, bumblebees walked onto the platform, explored a bit, and then slurped up the sugar water in the middle.

"Essentially, the first experiment was: Can bees learn to roll a ball?" says Perry.

Then, the researchers moved the ball to the edge of the platform.

The ball was a token, like the dollar bill you'd put in a vending machine. The sugar water was like a can of soda that could only be unlocked using the token.

If a bee couldn't figure out how to get the reward, a researcher would demonstrate using a puppet — a plastic bee on the end of a stick — to scoot the ball from the edge of the platform to the center.

"Bees that saw this demonstration learned very quickly how to solve the task. They started rolling the ball into the center; they got better over time," says Perry.

In a second experiment, the researchers found that bees that were able to watch a live bee do the trick first learned even faster. Some even found ways to get the sugar water more quickly by choosing a shorter route.

"It wasn't monkey see, monkey do. They improved on the strategy that they saw," says Perry. "This all shows an unprecedented level of cognitive flexibility, especially for a miniature brain."

How can bees do all this? Well, Perry says, it's not just about the number of neurons in a brain, it's the connections between them.

Research is showing more and more that animals — including tiny insects with 100,000 times fewer neurons than a human — can learn new skills quickly if their brains are wired right.

Bees, for example, can count. They can make decisions by weighing uncertainty, and can even learn to pull a string in order to reveal a hidden cache of sugar water.

All this new evidence for bees' mental flexibility is changing people's views of what insects are capable of.

As far as conventional thinking went, many animals, especially insects, were considered to be "genetically preprogrammed, unthinking machines," says Perry.

"They're just more behaviorally flexible than people generally thought an insect could be," says Dorothy Fragaszy, a comparative psychologist at the University of Georgia who studies tool use in primates.

Fragaszy doesn't consider Perry's experiment as evidence that bumblebees can use tools, but she wouldn't rule out the possibility that, in the right scenario, they could.

The other striking thing is that all the bees figured out that to move the ball, they'd have to roll it while walking backward, a very unnatural movement for them.

"It's hard to see how it's an analog to anything they do in nature," says Thomas Seeley, a biologist at Cornell University who has written books about bee behavior, including one on how honeybees make collective decisions.

Bees may shape wax in the hive or push flower petals aside to get to nectar, he says, but you don't see them "shoving objects around." And you certainly don't see them carrying a ball while walking backward, sort of like a dung beetle moving backward while rolling a ball of dung.

"So, it's an open question. Where did this come from? Is this an extension of the abilities they have to open up flowers?" says Seeley.

Perry plans to continue testing bees' learning abilities. "It'd be great to have them pick up a ball, fly it somewhere and then go somewhere else to get the reward," he says.