Accessibility links
Indonesia Wakes Up And Smells Its Own Coffee — Then Drinks It : The Salt Indonesia is the world's fourth-largest coffee producer, exporting more than it consumes. But that's changing, as demand from a rising middle class fuels entrepreneurship and connoisseurship. 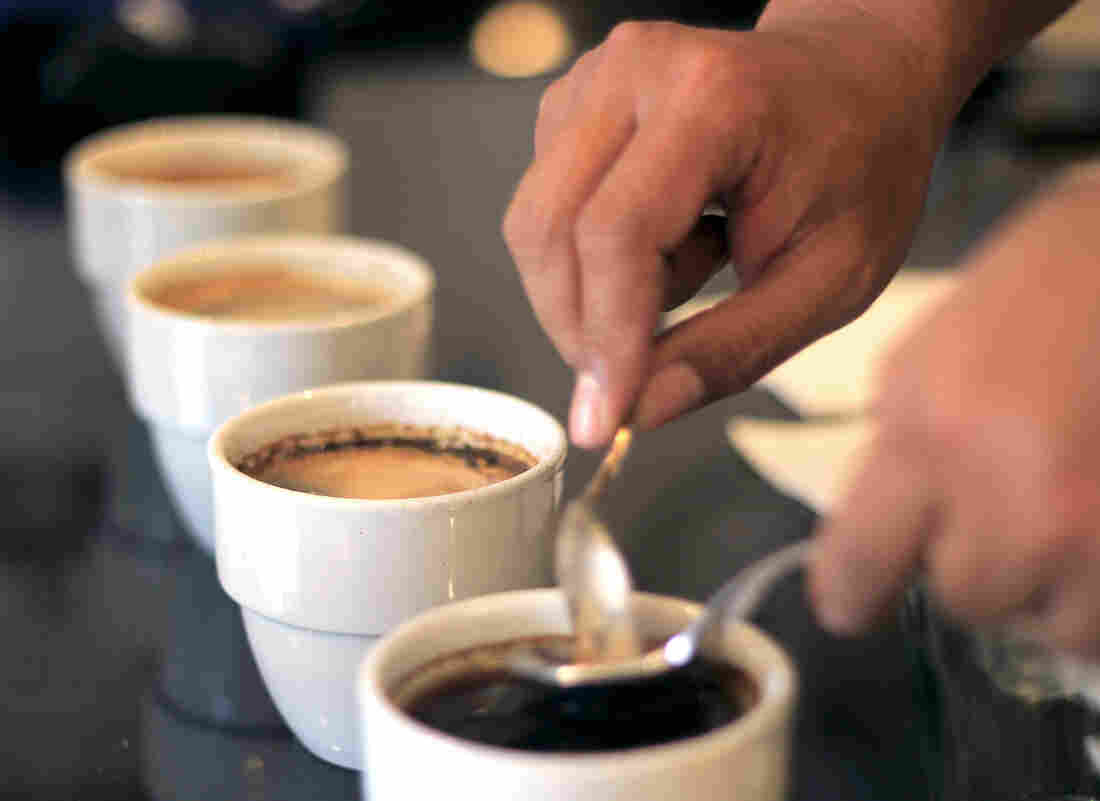 The Indonesian island of Java has long been synonymous with coffee. But it's only in the past decade or so that Indonesians have begun to wake up and smell the coffee — their own, that is.

Big changes are brewing in the country's coffee industry, as demand from a rising middle class fuels entrepreneurship and connoisseurship.

The trend is clear at places like the Anomali Coffee shop in South Jakarta. It roasts its coffee just inside the entrance on the ground floor.

If you walk into the roasting room at just the right moment, as the heat caramelizes the sugars in the coffee beans, it smells like someone is baking cookies.

Get close to the roasting machine, and you can hear the beans snap and pop. "It is the bean expanding because of the heat of the core," explains Anomali's founder Irvan Helmi. 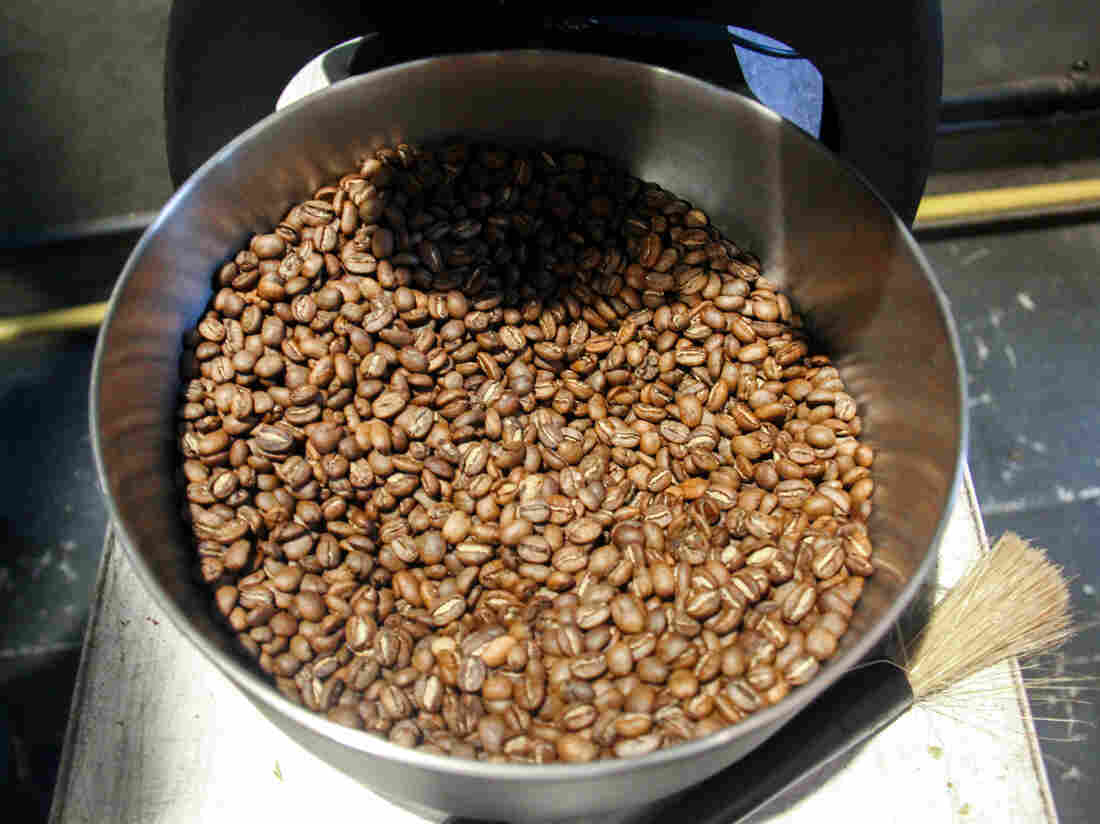 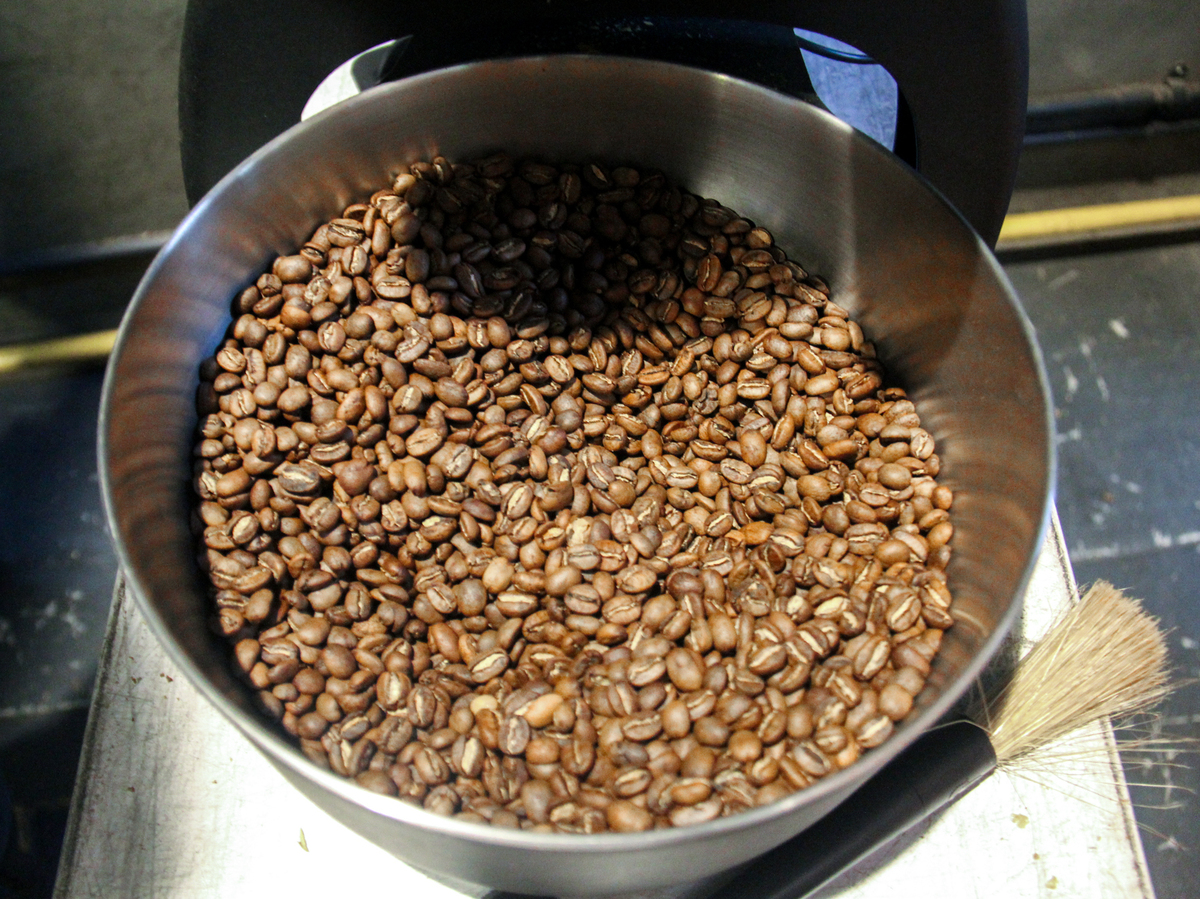 Anomali Coffee includes a trading company that wholesales to hotels and other businesses. It also has a barista training academy.

And upstairs from the roasting ovens is one of its seven cafes. On a table, bags of beans from a half-dozen single origins are on sale. A blackboard ranks the beans in terms of their acidity and body.

"In Toraja, you also have a medium body, chocolaty and caramel, herbs," Irvan says, picking up a bag of beans from Sulawesi Island.

Indonesia's more than 17,000 islands teem with cultural diversity, and more plant and animal species than researchers can catalog.

Little wonder, then, that from Aceh in the west to Papua in the east, the archipelago has more coffees than Irvan's tasters can get around to tasting.

"From Aceh alone, we have more than 100 samples each season," Irvan says. "Can you imagine?" 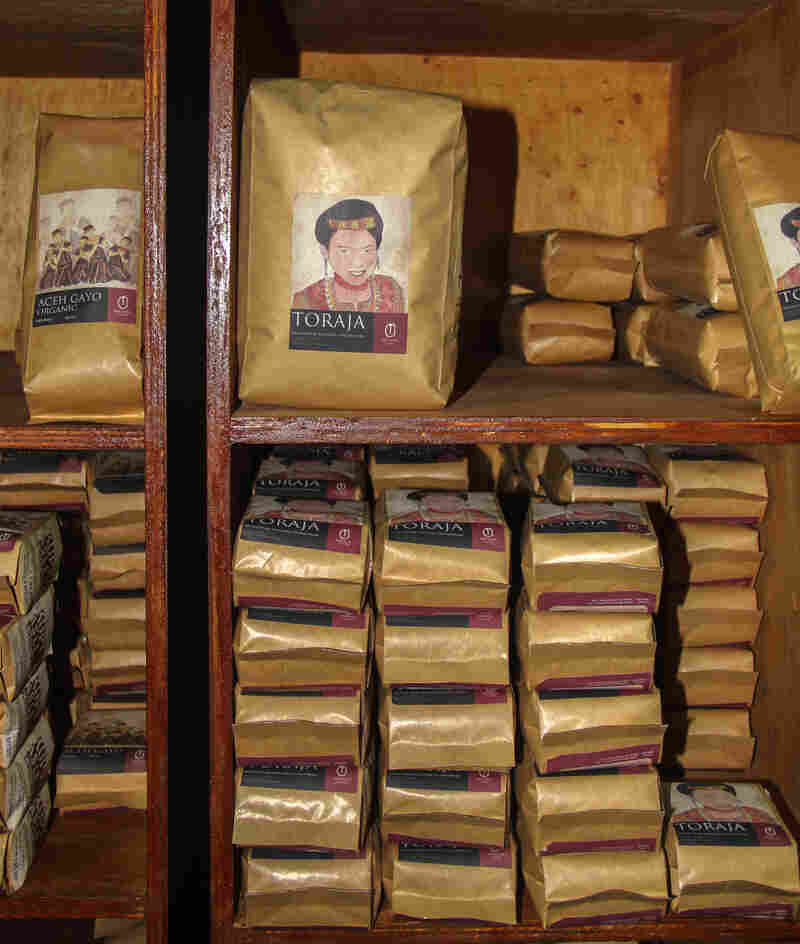 Anomali sells coffees from nine single origins at a time. Irvan reckons he has sourced coffee from about 100 single origins since founding his company a decade ago.

"We put a score on it for each season," he says, "and we select which coffee we want to bring for our customers."

Then comes a slew of different procedures and techniques, from the way the beans are dried and hulled to the time and temperature at which the they're roasted, and the way they are ground and brewed to bring out their characteristic flavors.

Irvan notes that Indonesian coffees are known for their "earthiness" and body. Indonesians often drink these coffees black, and therefore, he says, they don't need the dark roast and acidity needed to be tasted above all the milk and syrup added to them in Western-style cafes.

Colonialists started growing coffee in what was then the Dutch East Indies in the 17th century. After parasites decimated plantations of Arabica beans in the 1880s, the Dutch introduced the hardier Robusta variety, which continues to account for most of Indonesia's crop today.

Indonesia is the world's fourth-largest producer of coffee after Brazil, Vietnam and Colombia, and it exports more than it consumes. 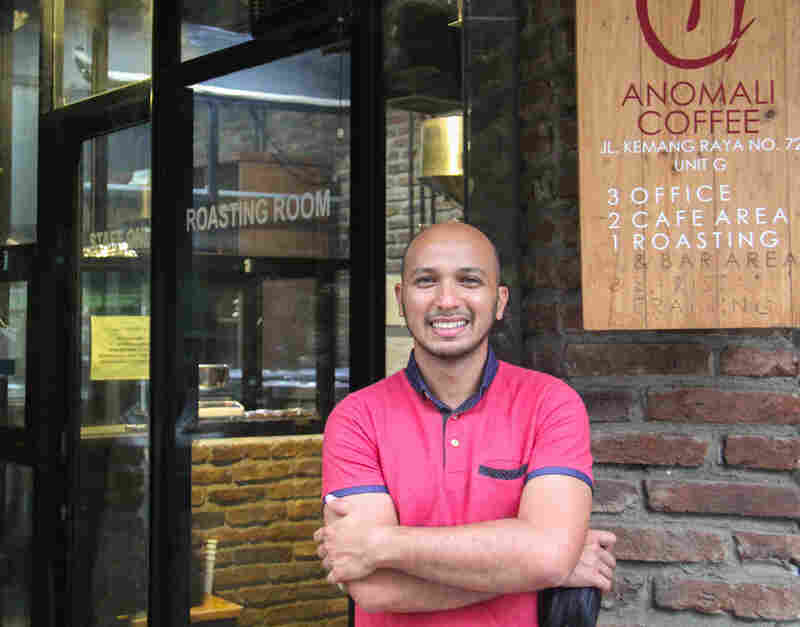 Irvan Helmi, founder of Anomali Coffee, stands outside his South Jakarta shop, which specializes in single-source coffees from around the Indonesian archipelago. Yosef Riadi for NPR hide caption 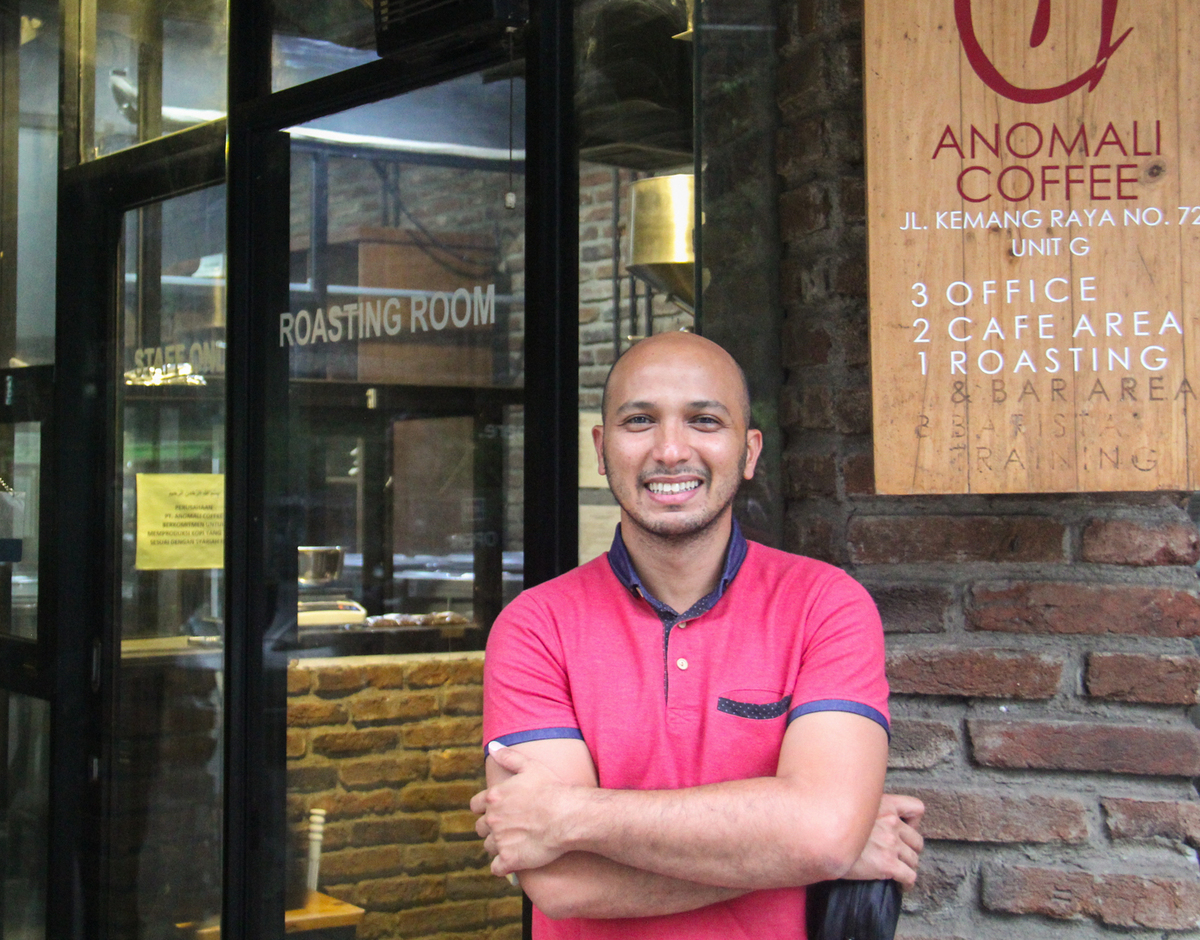 Irvan Helmi, founder of Anomali Coffee, stands outside his South Jakarta shop, which specializes in single-source coffees from around the Indonesian archipelago.

But Irvan explains that this has been changing in recent years, as demand from Indonesia's growing middle class has taken off, and improved logistics have helped build a thriving, archipelago-wide market.

And that's where Irvan saw his chance.

"The mission becomes clear," he declares, "to promote Indonesian coffee as a curator."

Irvan acknowledges the contribution of Starbucks to the Indonesian market. He jokingly calls the Seattle-based chain his "marketing department," as it has the financial muscle to penetrate new and remote cities and give local consumers an introduction to authentic espressos, cappuccinos and the like.

Irvan says most coffee companies blend different coffees together to make a consistent product. But each of Anomali's coffees comes from a single origin.

"We don't care about consistency," he sniffs. "If it's a high quality, we want it."

So you could say that each of their coffees is, well, an anomaly. "That's the big difference between Anomali and the mass market," he says. "And we're very proud of it."

Mirza Luqman Effendy, a friend and colleague of Irvan's who runs a café called Brewphobia (something he got over a long time ago), explains to me that younger Indonesians have different tastes in coffee from their parents' generation. 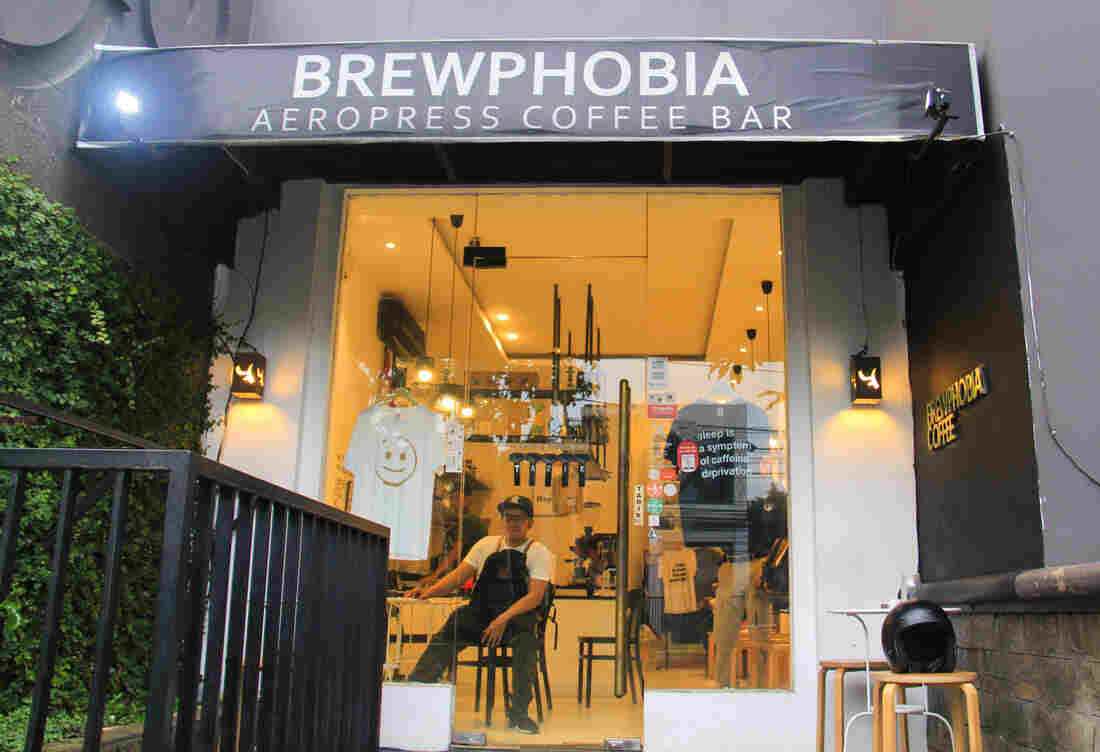 Mirza Luqman Effendy, founder of the Brewphobia coffee shop in South Jakarta, is seen through the window in his shop. Yosef Riadi for NPR hide caption 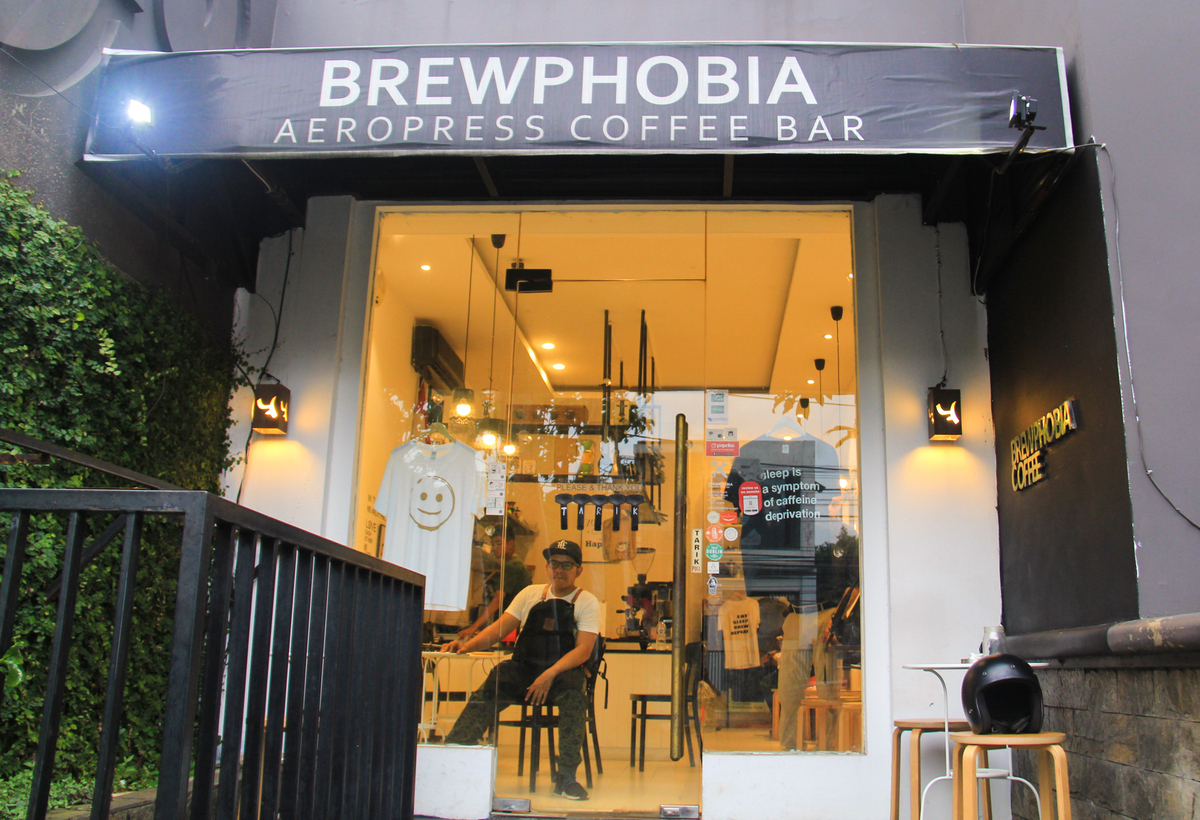 Mirza Luqman Effendy, founder of the Brewphobia coffee shop in South Jakarta, is seen through the window in his shop.

"The fact is, my father is a coffee addict," Mirza says. "He really likes very intense coffee, like Robusta, roasted very dark, and then basically he drinks coffee with putting some sugar and ginger."

He says that recipe is way too old-school for him: "My father's coffee is just like ... coffee. You cannot taste any attributes besides the coffee taste."

But Mirza tastes so much more in a cup than just coffee. He hones in on the attributes of each bean, the notes of citrus and spice, the feel on his palate and the lingering aftertaste.

Of course, it's young people like Irvan and Mirza, sharing their passion for coffee, that drives the coffee scene in many countries.

But with its rich variety of beans and long history of cultivation, Indonesia is building a coffee culture — and a pride in it — that is truly homegrown.