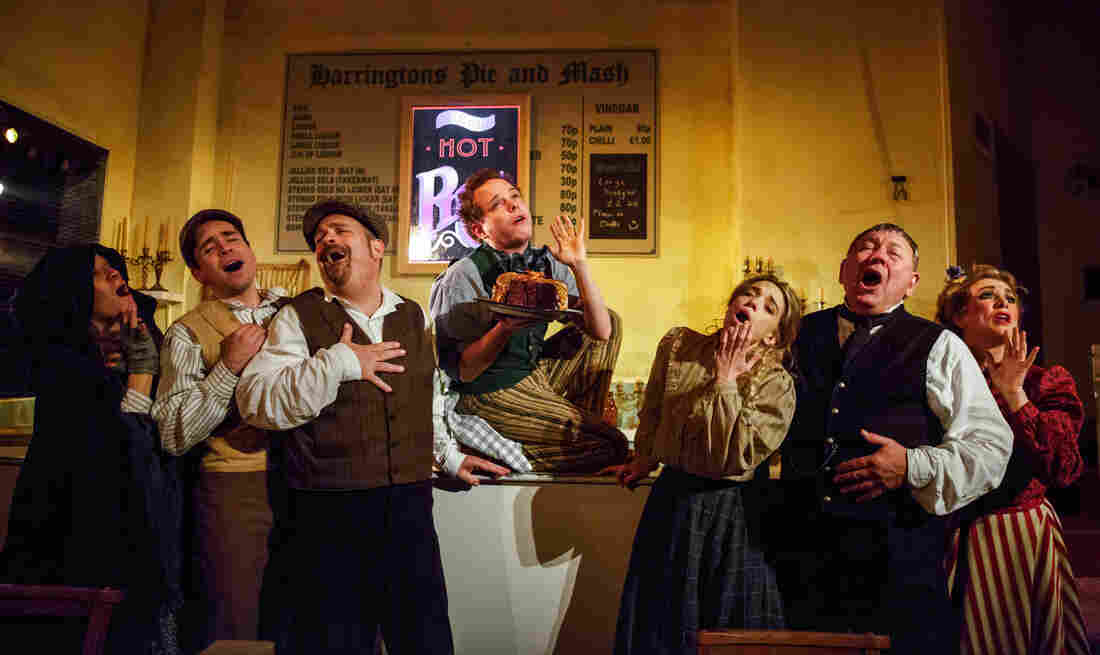 The Barrow Street Theatre has been transformed into a near-perfect recreation of Harrington's Pie & Mash — one of the oldest working pie shops in London. Joan Marcus hide caption 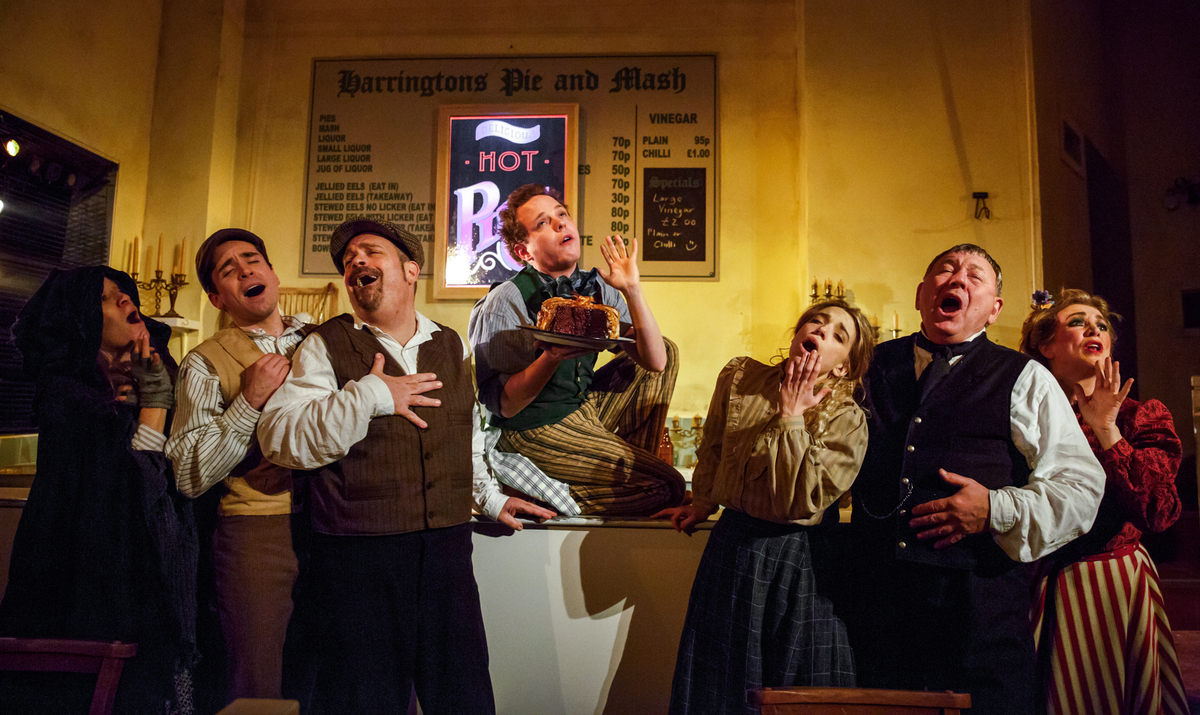 The Barrow Street Theatre has been transformed into a near-perfect recreation of Harrington's Pie & Mash — one of the oldest working pie shops in London.

Sweeney Todd is a piece of theater that should make you lose your appetite. The grisly musical by Stephen Sondheim tells the story of a demonic barber whose clients become the filling for meat pies. Many productions leave the stage soaked in blood.

And yet, at the Barrow Street Theatre in New York City earlier this month, theater-goer Mary Alice Kellog eagerly dug into a hot meat pie. It's part of the pre-show experience. Kellog said she's seen every New York production of Sweeney Todd: The Demon Barber of Fleet Street since the show originated in 1979. Knowing what the show is about, she was still willing to eat a meat pie before the show. And she loved it: "The pies are really delicious, they're flaky, they're light, no fingernails in them or anything."

The little 130-seat Barrow Street Theatre has been transformed for this production. It is now a near-perfect recreation of Harrington's — one of the oldest working pie shops in London.

"The tiles, the kind of yellow, slightly dirty walls — it's all as it would be if you walked into Harrington's," says Rachel Edwards, founder and artistic director of the Tooting Arts Club, which stages the production.

A few years ago, Edwards' shoestring theater company in South London first mounted this production of Sweeney Todd in Harrington's after the pie shop closed for the day. The shop could accommodate 32 people per night. "It was thrilling because it was so tiny," says Edwards. "It did really serve as a kind of pressure cooker and Sweeney is singing two inches away from your face. So it's pretty intense."

The production got such raves that the composer, Sondheim, dropped by. So did the mega-producer Cameron Mackintosh — who offered the company a slightly larger 70-seat venue in London's West End. And now the production has come to New York City, where it is in previews.

To create the pre-show meal of pie and mash, Edwards decided to hire a local baker whom President Obama once dubbed "The Crustmaster" – former White House Pastry chef Bill Yosses.

The two gigs aren't all that different, according to Yosses. "The White House has a very theatrical feel, even though it's not supposed to. It's supposed to be real. You know, the day is pretty scripted and the speeches obviously are scripted. The visuals are scripted, in the sense that the administration wants to present this best face forward. Who doesn't? And in that way, it's very theatrical." 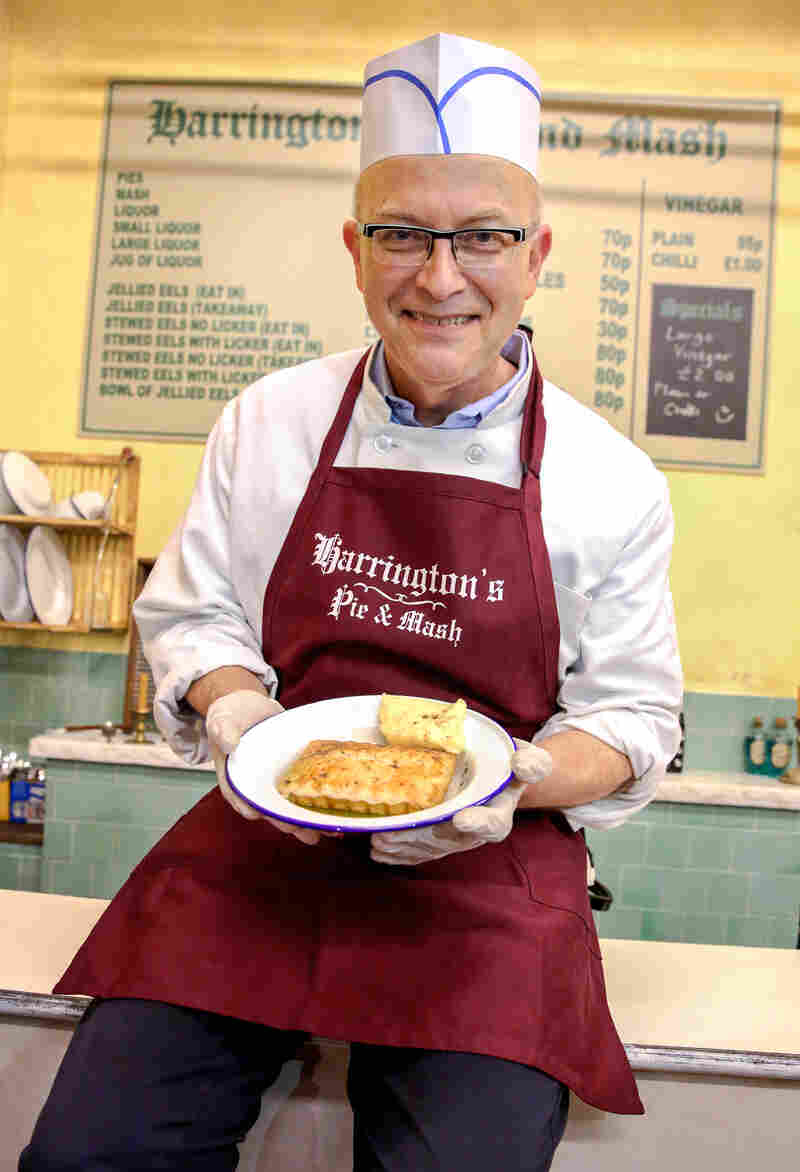 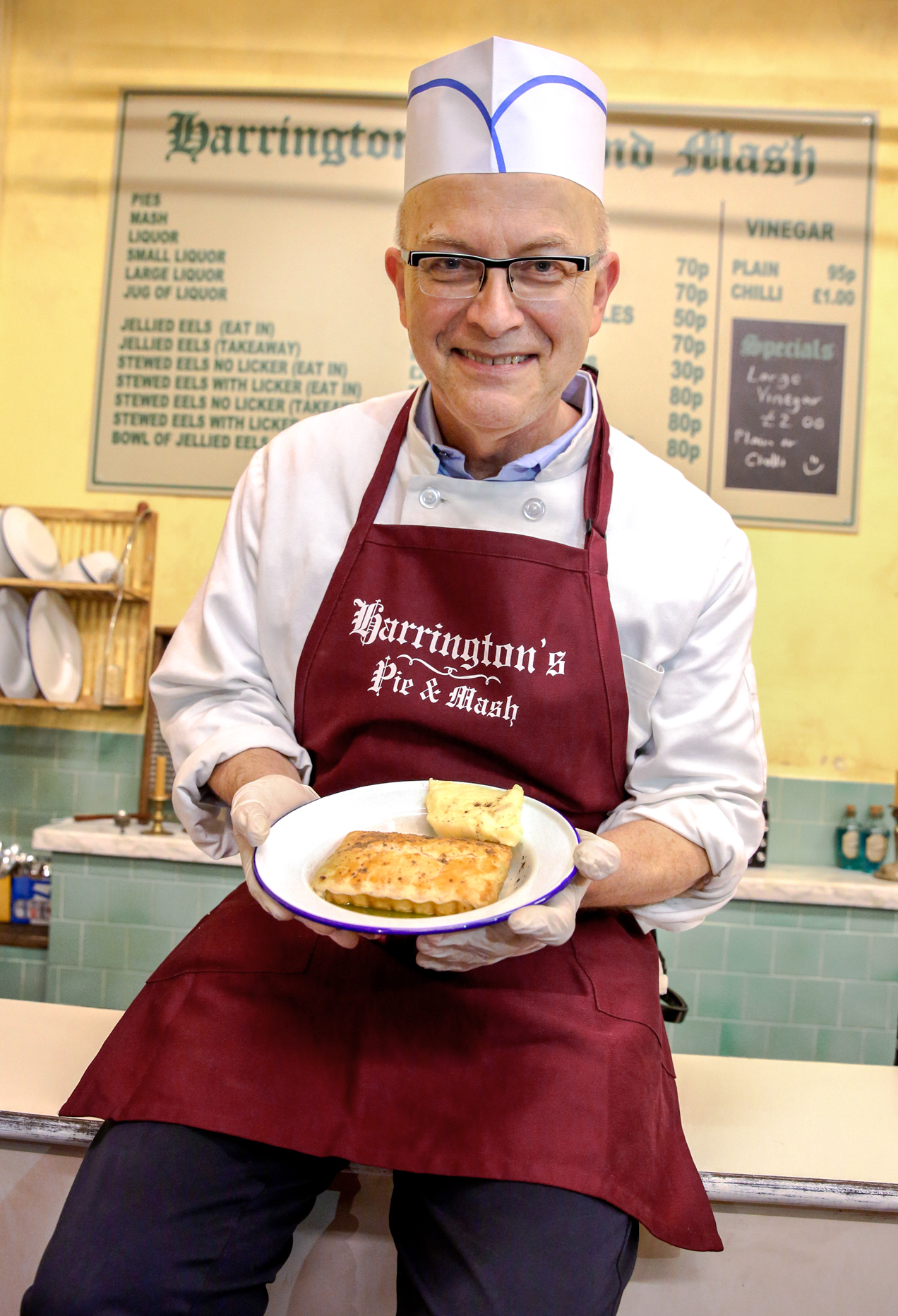 Yosses was trained as a classic French pastry chef. Before he worked in the Obama White House, he hadn't made very many pies. But President Obama has a famous weakness for pies, so in the Obama years, Yosses says he became a "pie machine." His new role is really "just inertia. I just couldn't stop."

A thin man with a quick smile and bright blue eyes, Yosses serves pies and mash to the audience as they enter the Barrow Street Theatre. With a paper hat and an apron that says, "Harrington's pie shop," he is playing a part — and seems to be enjoying himself. But his role ends well before the curtain rises on the musical.

Yosses' day starts much earlier, in a nondescript warehouse district in Queens, where he runs an online pie business called Perfect Pie. The bakery sits across the street from a Gothic cemetery, adding to the morbid humor.

"Across the street, especially for Sweeney Todd, we have an unlimited supply of, uh, produce," Yosses jokes.

Inside, pie shells are baked and filled with the chicken and vegetables, cooked in a little white truffle butter, then sprinkled with truffle zest. Traditional British pies are not made from chicken. But Yosses has an explanation for that. "When they talk about exotic meats, they say everything tastes like chicken. I thought, I'll make chicken."

Jokes aside, Yosses says this new role is an example of life coming full circle. The first time his parents visited him after he moved to New York from Ohio, they went to see the original 1979 production of Sweeney Todd.

"And they had never seen a live musical before," he recalls. "And they said, 'Now we understand why you want to live in New York.' And they never really accepted it before that. So it was really kind of a huge moment for me."

It's nearly 4 p.m. At the bakery, Yosses' assistant pulls the golden pies out of the oven and packs them into sealed crates for the trip into town in his Jeep.

At the Barrow Street Theatre, people line up more than an hour before the show to eat. The audience sits at benches and long tables for both the performance and the meal. These pies never appear on stage. Beautiful, flaky and delicious, they are only pre-show fare, served with a side of mashed potatoes and a green herb sauce known as "liquor."

After the plates are empty and the dishes are cleared, actors take their places, the factory whistle sounds, and the blood starts flowing. Sweeney Todd at the Barrow Street Theatre officially opens on March 1. 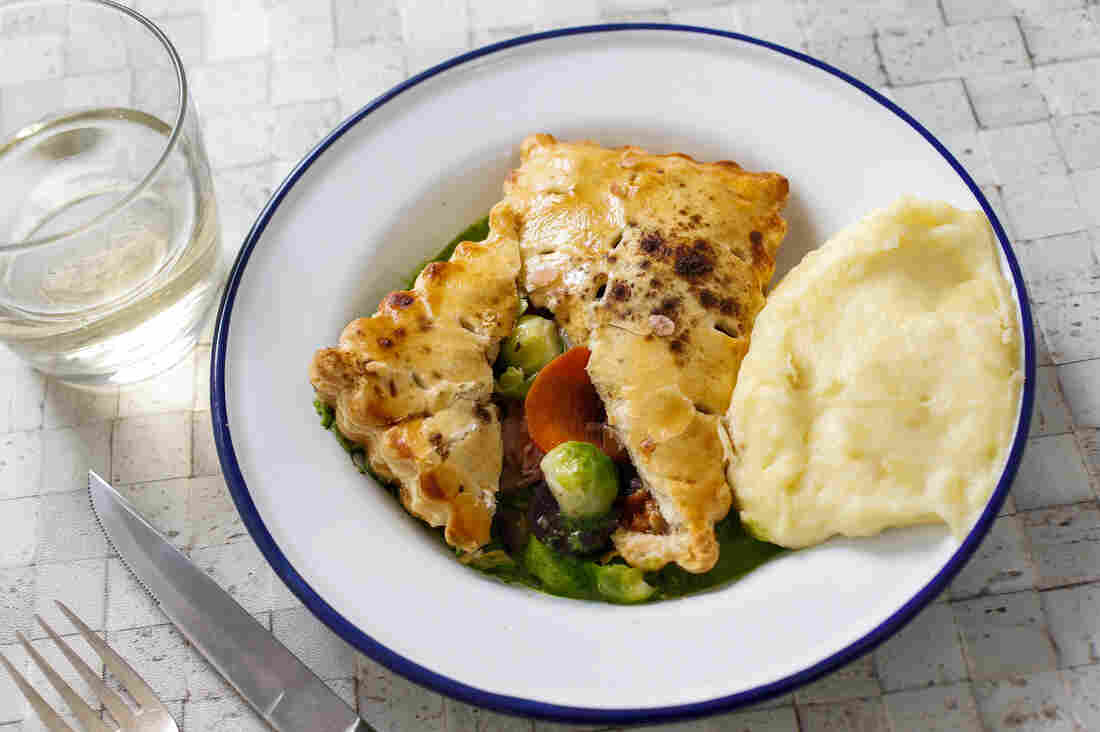 For Barrow Street Theatre, pie shells are baked and filled with the chicken and vegetables, cooked in a little white truffle butter, then sprinkled with truffle zest. Joan Marcus hide caption 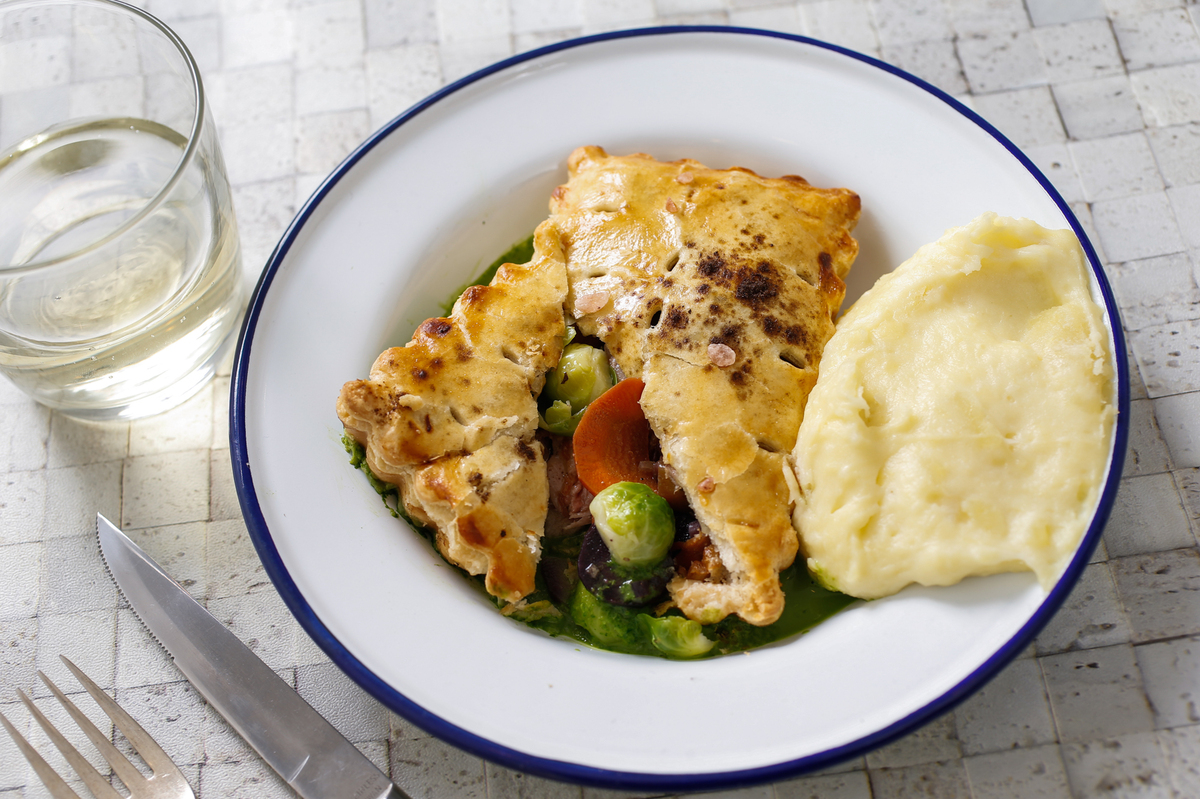 For Barrow Street Theatre, pie shells are baked and filled with the chicken and vegetables, cooked in a little white truffle butter, then sprinkled with truffle zest.

Method: Cut butter into small pea-size pieces and place in freezer for 10 minutes. Meanwhile, place flour and salt in standing electric mixer and mix on slow speed with paddle attachment. Add the butter slowly, taking care that is does not jump out of the bowl. Mix loosely and then add cold water down the side of the bowl with mixer on slow, until the dough comes together. Remove from bowl and work into a ball with floured hands, then push down to a disk, wrap with plastic film and refrigerate for 2 hours. Roll out on a floured surface to ¼-inch thickness and then place in a pie dish, crimping the edges. Cut away excess and add to remaining pie dough, re-roll to a ¼-inch thickness into a circle for the top.

Method: Bring 3 quarts water to a boil and add chopped vegetables, except the mushrooms, to the water and cook lightly, about 3 minutes. Then add the chicken meat and simmer for 10 minutes. Remove chicken, cool and chop into half-inch dice. Remove the vegetables with a slotted spoon and skim the fat off the top of the liquid. Boil the cooking liquid for 30 minutes to reduce the stock and when it is down to one quart of liquid, add 2 tablespoons of corn starch dissolved in cold water. Stir continuously with a whisk, bringing it back to the boil until the liquid thickens.

Strain and cool. Mix together the vegetables, chicken and mushrooms and moisten with the reduced chicken stock until it is like a thick ragout.

Prepare the pie: Prebake the bottom pie shell lined with aluminum foil at 350F for 20 minutes. Then remove the foil and fill with the chicken vegetable mixture. Prepare an egg wash — two eggs and pinch salt — then brush the edges and cover with the dough circle, pressing firmly to seal the edge. Poke the surface several times with a fork to make air vents and then paint with egg wash. Bake in a 350F oven for 40 minutes, until golden brown and bubbling. Serve warm.