Accessibility links
What's The Environmental Footprint Of A Loaf Of Bread? Now We Know : The Salt New research calculates the greenhouse gas emissions involved in making bread, from wheat field to bakery. The vast majority of emissions come from one step in the process: farming. 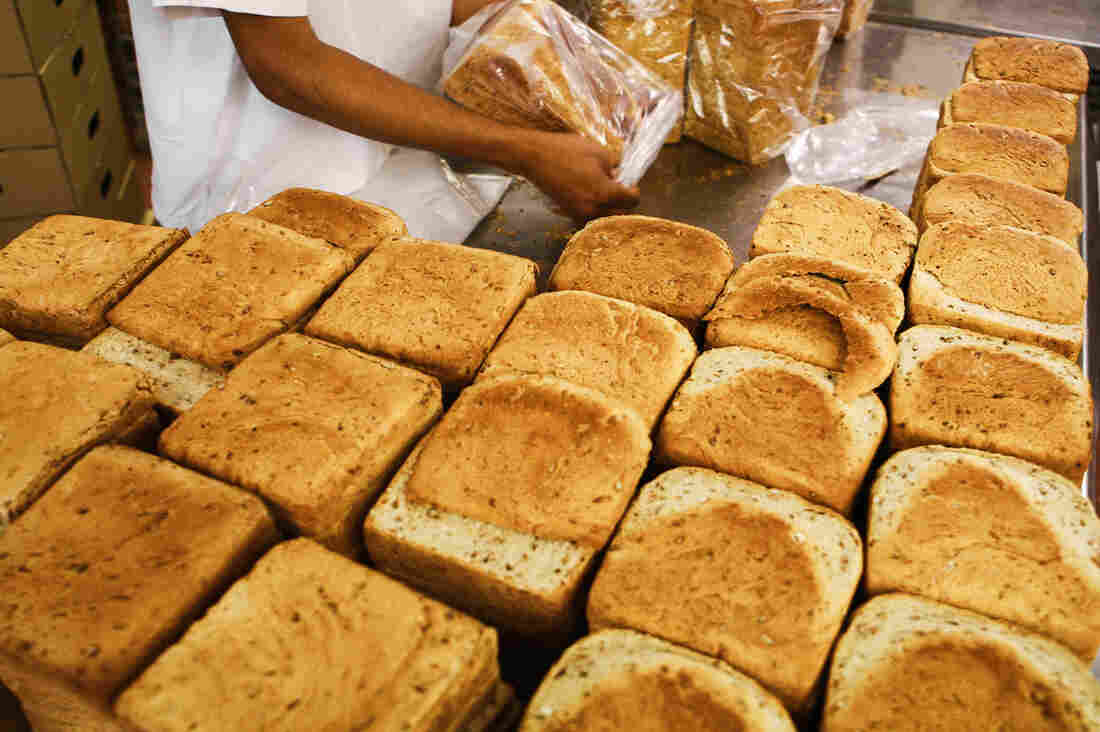 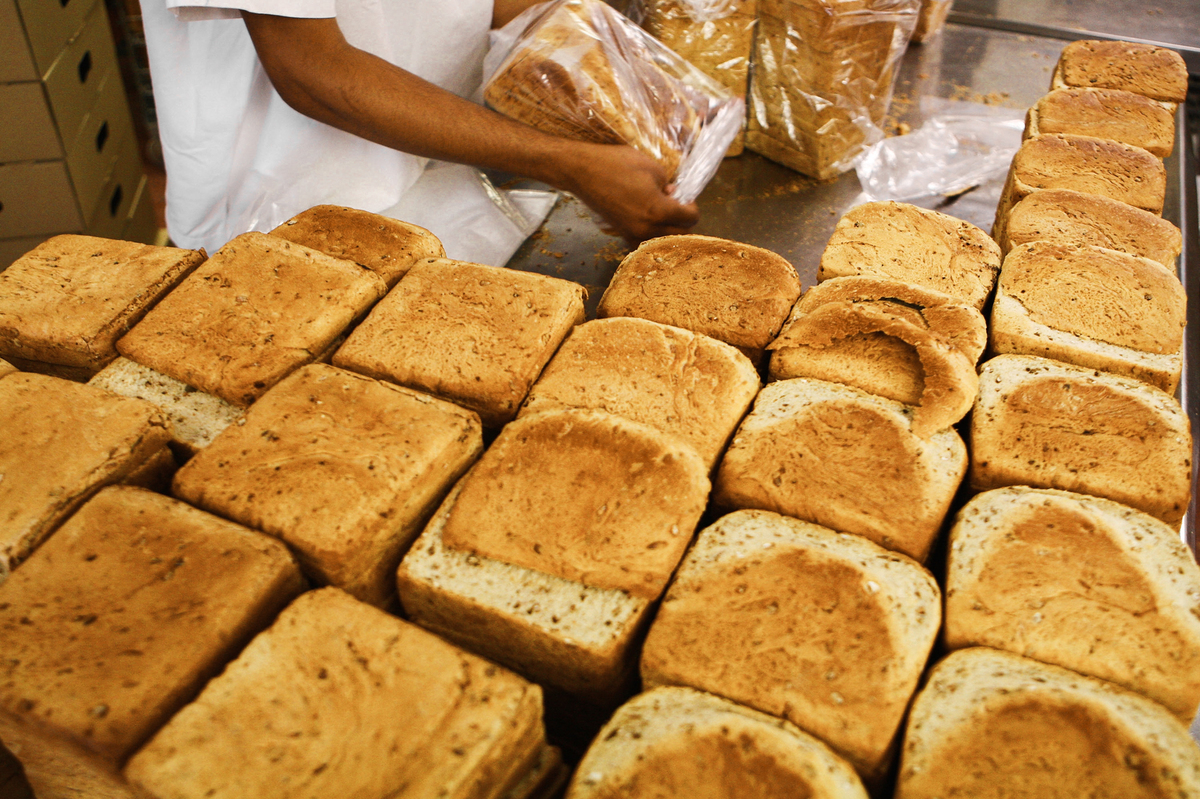 From field to bakery, a loaf of bread packs a measurable environmental punch.

When it comes to climate change, we often think of the cars we drive and the energy we use in our homes and offices. They are, after all, some of the biggest contributors to greenhouse gas emissions. But what about the toast you ate for breakfast this morning?

A new study published Monday in Nature Plants breaks down the environmental cost of producing a loaf of bread, from wheat field to bakery. It finds that the bulk of the associated greenhouse gas emissions come from just one of the many steps that go into making that loaf: farming.

The study was conducted by a team of researchers at the University of Sheffield, in the U.K. They wanted to understand the environmental impacts of the entire life cycle of a common staple. They chose bread and used a "real-world supply chain," says Liam Goucher, the lead author of the study and a research fellow at the Grantham Center for Sustainable Futures at the University of Sheffield. "We focused on a specific farm, which was in Lincoln, in the U.K., and we focused on a specific mill and a specific [commercial] bakery."

They collected and analyzed data for emissions involved at every step of the process, including growing the wheat, fertilizing it, harvesting the crop, transporting the grains to the mill, grinding the grains into flour, transporting the flour to a bakery and then baking and packaging a loaf of bread. Scientists call this a life cycle analysis.

Many stages were energy intensive and involved with emissions — for example, the machinery involved with tilling the soil, harvesting, and irrigation, or the electricity required to operate the mill and the bakery. But the vast majority of emissions — nearly 66 percent — came from growing wheat.

"We found that over half of the environmental impacts of producing a loaf of bread come from wheat cultivation," says Goucher. "The interesting thing is that 40 percent is attributable just to the use of ammonium nitrate fertilizers alone, which is a huge amount, when you consider it." The fertilizers also cause a lot of water pollution when they run off into streams and rivers. 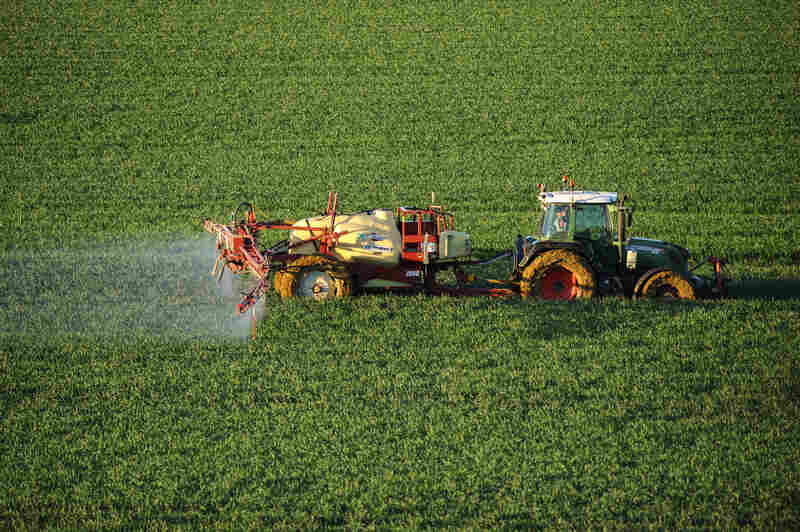 A farmer sprays a chemical fertilizer containing nitrogen on a wheat field in southern France. Nitrogen fertilizers are a known source of greenhouse gases and water pollution all over the world. Remy Gabalda/AFP/Getty Images hide caption 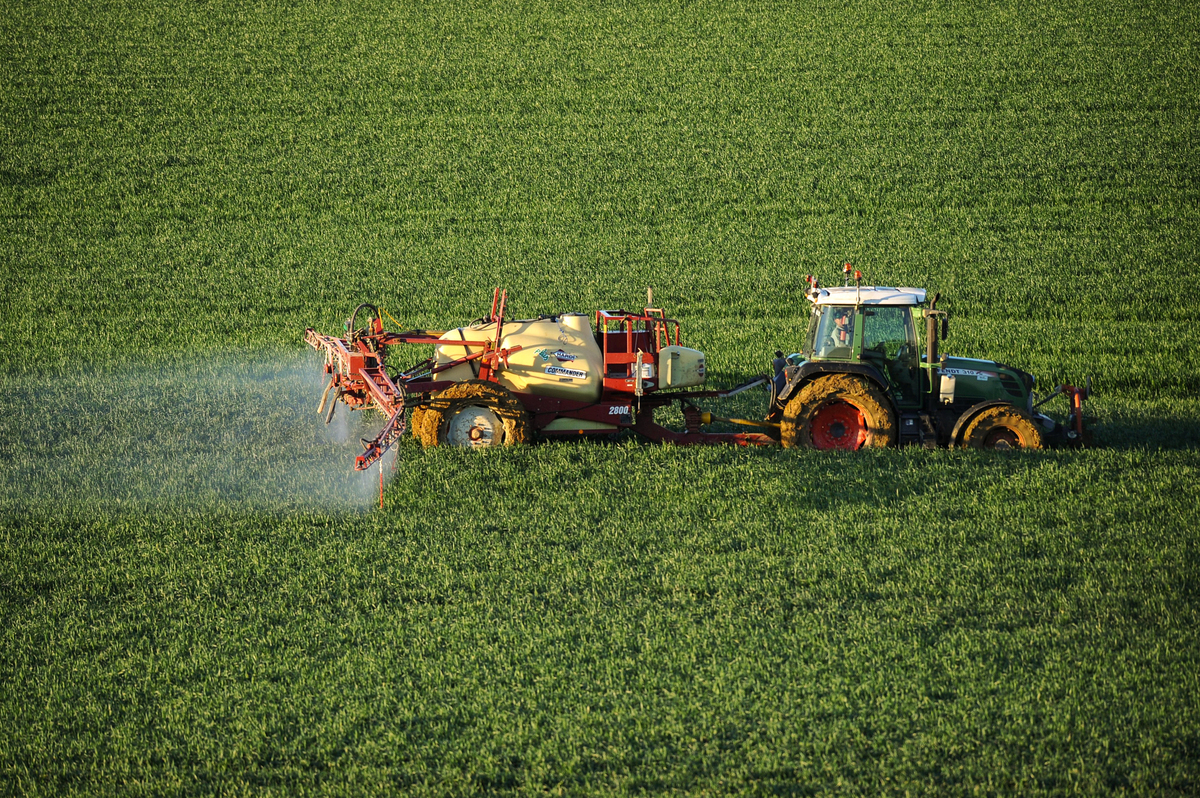 A farmer sprays a chemical fertilizer containing nitrogen on a wheat field in southern France. Nitrogen fertilizers are a known source of greenhouse gases and water pollution all over the world.

Globally, agriculture is thought to contribute about one-third of all greenhouse gas emissions. That includes the emissions from deforestation to create farmlands. And we also know about the emissions involved in manufacturing fertilizers (an energy-intensive process) and their use on farms. Farmers typically use more fertilizers than they need to, and not all nitrogen in the fertilizers is used up by plants. Some of the nitrogen goes back into the atmosphere as nitrous oxide, a potent greenhouse gas.

What is new about the study, says Goucher, is that it breaks down the emissions at every step, so we can figure out which steps to focus on to reduce emissions.

"It kind of points to the fact that if you want to reduce the climate impact of food production, we need to think of fertilizer manufacturing and fertilizer application as one place where we have big leverage to reduce climate impact," says Navin Ramankutty, a professor at the Institute for Resources, Environment and Sustainability at the University of British Columbia, Vancouver, who was not involved in the study. There are known ways to reduce use of nitrogen fertilizers, like applying fertilizers only at certain times of the growing season, when plants need them the most.

The study is "very interesting, very complete," says James Galloway, an expert on nitrogen cycles at the University of Virginia, Charlottesville, who was not involved in the new study. "This is exactly the kind of thing that should be done with other food commodities."

Galloway says it would be even more useful to do such analysis on animal products like beef and pork, which we know are bigger sources of greenhouse gas emissions. "That would have interesting results and would be even more useful if you're going to ask the question, 'What can society do about the issue?' " he adds. "This type of analysis would generate very well the take-home message that if you only eat the amount of protein you're supposed to eat, as opposed to overconsumption, you would decrease the environmental footprint."

In the future, this kind of analysis could be used to create a market for foods with lower emissions, says Ramankutty. The way to do that is by "asking consumers to vote with their money," he says.

If for example, customers demand "climate-smart bread," then bakeries would have to prove that their bread uses less energy than the average loaf. Bakeries can in turn influence the supply chain. "They can go back to the farmer and say, 'Can you use less fertilizer, or use organic fertilizer?' " Ramankutty says. That could become a productive way to make sure that the food we eat has a smaller climate impact, he adds.