Accessibility links
Ecuador's Fanesca Is A Lenten Soup Flavored With Centuries Of Tradition : The Salt This thick, creamy stew features 12 "grains" to represent the Twelve Apostles and cod to denote Jesus. It takes days and many hands to prepare, a meal befitting Ecuador's elaborate Lenten traditions.

Ecuador's Fanesca Is A Lenten Soup Flavored With Centuries Of Tradition

Ecuador's Fanesca Is A Lenten Soup Flavored With Centuries Of Tradition 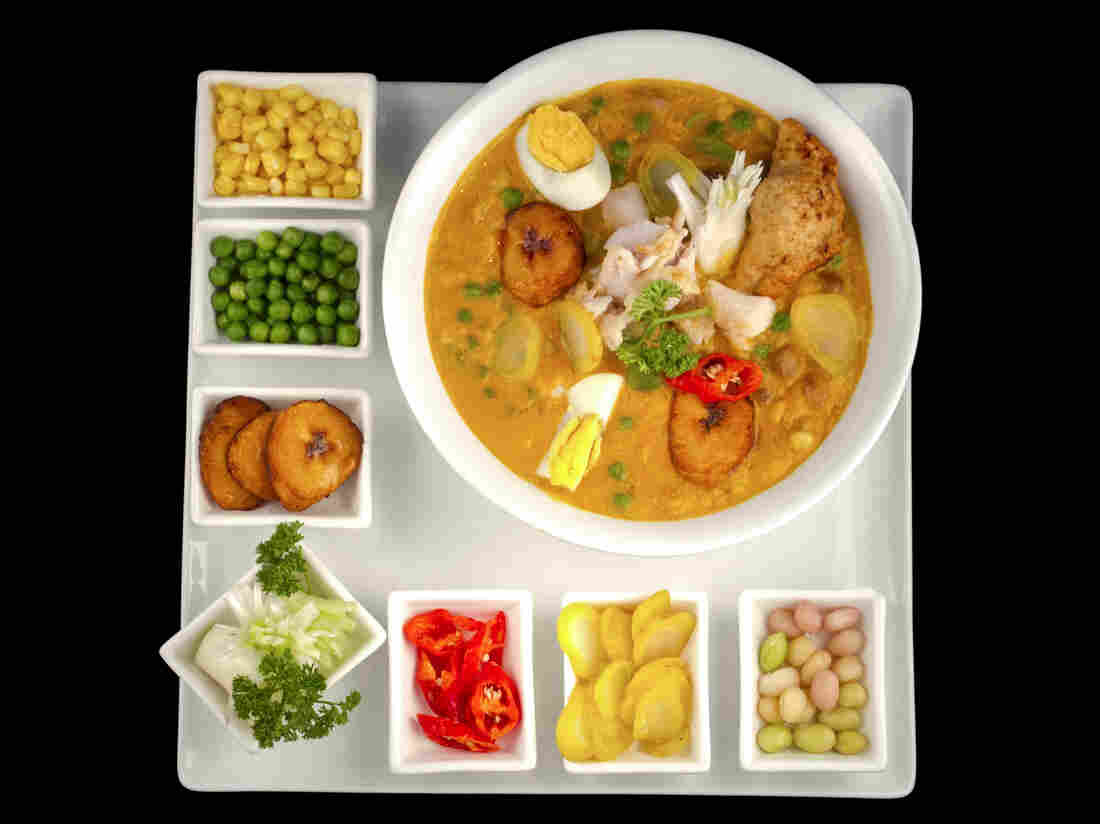 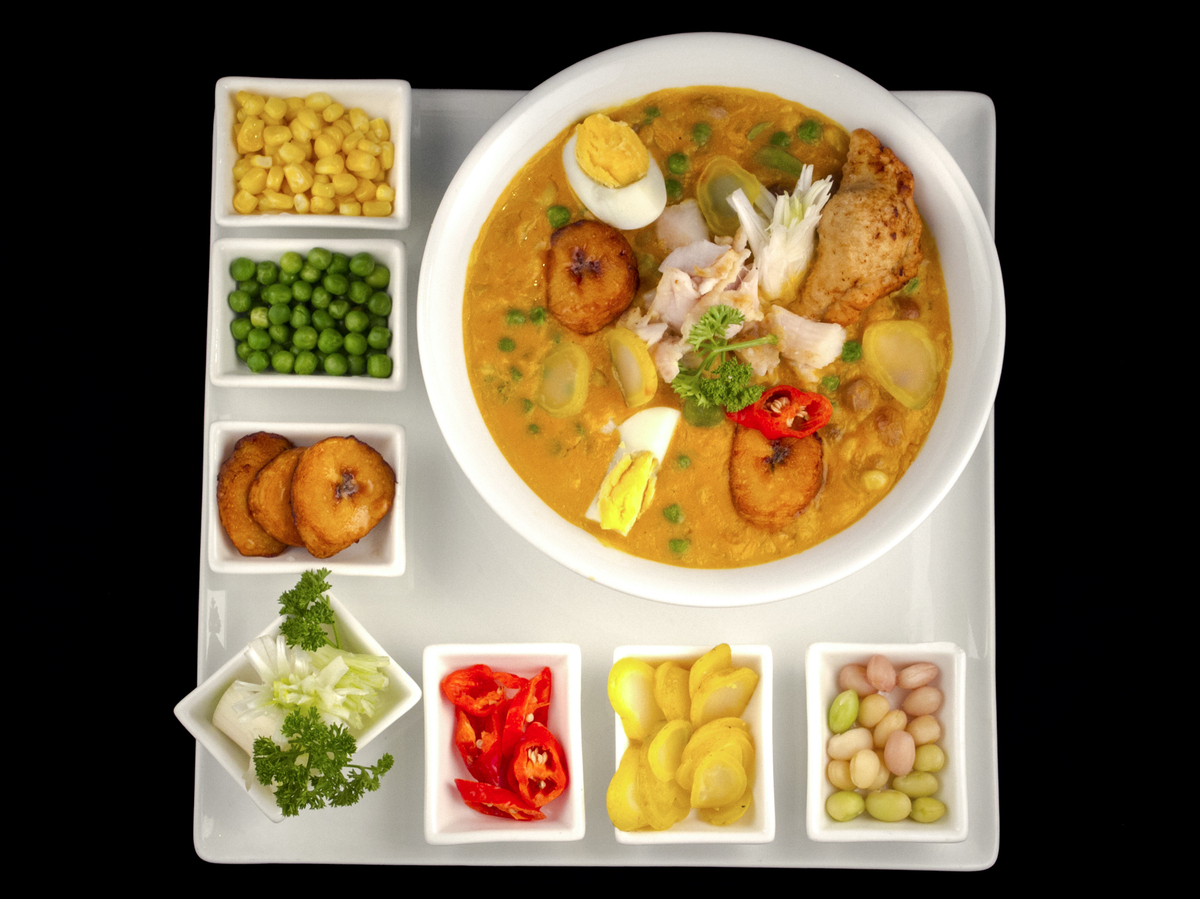 The Mercure Alameda Hotel in Quito, Ecuador, makes a hearty soup that regularly appears among the 12 winners of the city's annual fanesca competition.

In Latin America, Lent is full of elaborate Catholic rituals, from palm weavings and sawdust carpets to processions of robed penitents. But only in Ecuador will you find fanesca, the equally elaborate Lenten soup.

"Fanesca is a traditional Ecuadorian dish of unmatched flavor," says Lily Rodriguez, a home cook in the capital city of Quito. "It's a stew that combines 12 tender grains and dried cod in a creamy base. To all that, you add peanuts, hard-boiled eggs, fried plantains and mini empanadas. In sum, [it's] a mix of flavors that once you taste it, you will remember forever."

The 12 "grains" include a combination of beans and vegetables, and together they represent Jesus' 12 apostles, while the salt cod represents Jesus (a fish is an ancient Christian symbol.) Fanesca is prepared and eaten throughout Ecuador's six weeks of Lent, and is an indispensable lunch on Good Friday.

The origin of the dish is unclear. Food historian Maria Baez Kijac, a native of Quito, writes in her cookbook, The South American Table, that some researchers believe "fanesca represents a Christian ritual that was practiced in the catacombs in Rome during the persecution of the Christians. During Holy Week, the Christians would sneak into the catacombs carrying food, mainly grains and legumes, which were put into one big pot to be distributed among all. That is why, even to this day, it is the custom to give fanesca to relatives, friends, neighbors, and the needy."

Rodriguez subscribes to a different theory. "It is said that this custom dates to the pre-Columbian era, when the indigenous people of the Andes gave thanks to Pachamama (Mother Earth), preparing this dish with the bounty of the harvest. With the arrival of the Spaniards to these lands, fanesca was Christianized, coinciding with the time of Holy Week and the prohibition of eating meat during Lent." 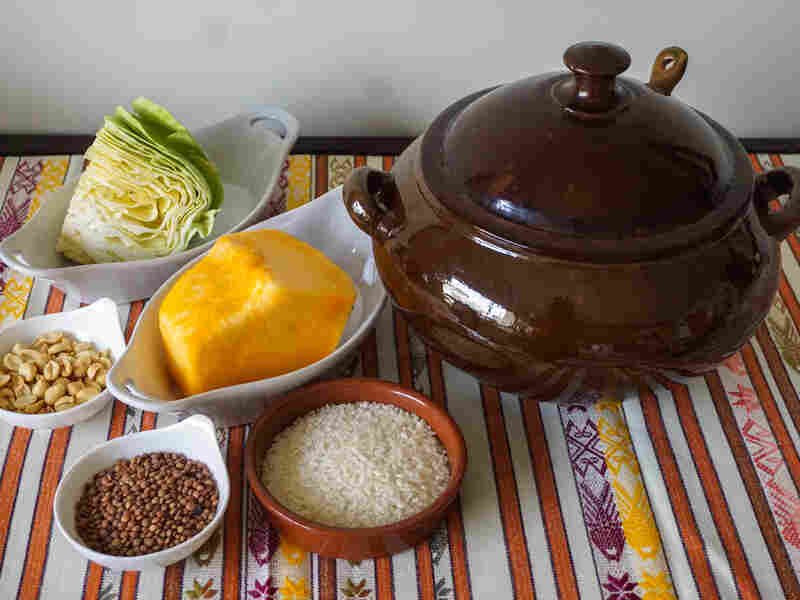 Fanesca is made with grains and vegetables, and includes toppings such as peanuts, fried plantains, hard-boiled eggs and mini empanadas. Amy Robertson for NPR hide caption 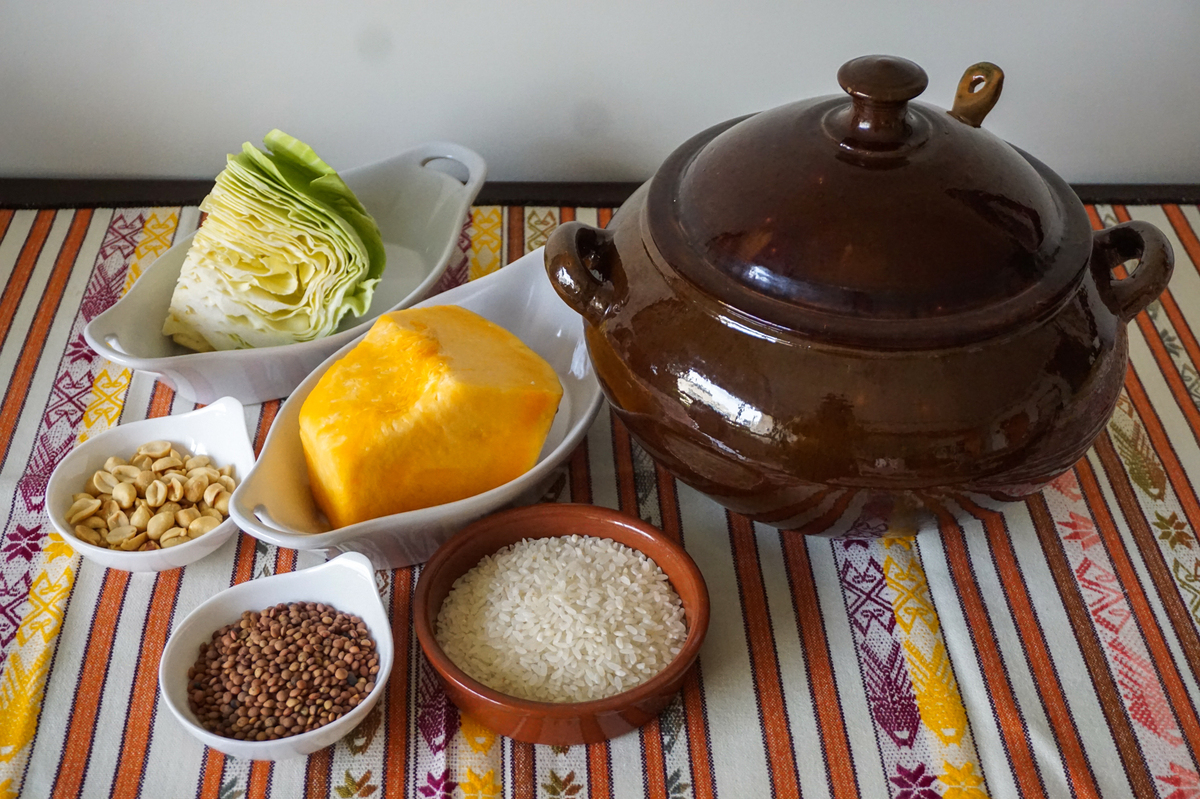 Fanesca is made with grains and vegetables, and includes toppings such as peanuts, fried plantains, hard-boiled eggs and mini empanadas.

Whatever the origin, fanesca is now a national tradition, especially popular in Ecuador's mountain highlands. Many restaurants offer fanesca throughout Lent, and on Good Friday, small vendors set up tables to sell bowls of the rich soup from enormous vats. While many Ecuadorians buy fanesca at restaurants to take home, others, like Rodriguez, make fanesca as part of a beloved ritual. It starts with a trip to a local market to purchase the freshest ingredients. Then the real work begins.

"Can you imagine a peeled kernel of corn or a peeled bean?" Rodriguez asks. "They have to be peeled one by one, so that the soup is creamier and more delicate and, according to my mother, easier to digest." Then, she says, "Each type of grain is cooked separately, as are the other ingredients. I prepare it over three days, between shopping, preparing the grains, and mixing this marvel of flavors."

Beans (white, lupini and fava), peas, pumpkin, rice and hominy are common to most fanescas, and adding milk to the base is obligatory. But each cook has his or her own combination of grains, beans and vegetables to make up the 12.

"Due to the great gastronomic diversity in Ecuador, there exist many variations of tastes and methods of preparing the fanesca," says chef Angel Valdiviezo of Quito's Mercure Alameda Hotel. Valdiviezo's version, which regularly appears among the 12 winners of the city's annual fanesca competition, includes lentils, cabbage and Ecuadorian produce such as winter melon and melloco, a mucilaginous tuber.

According to Valdiviezo, the secret is in the sauce – or in the soup base, to be precise.

"Our fanesca is recognized for maintaining a historical and ancestral recipe. [The] secret consists in draining the salt cod and throwing away the first water, in order to then soak it in milk for 24 hours," Valdiviezo explains. "This milk base is used as the main base."

Cooks who prefer a milder taste prepare the salt cod separately, leaving it to diners to add fritters, plantains and other toppings.

Baez Kijac notes in her cookbook that "the seasoning is also controversial. Some people like a very spicy sauce, while others prefer a more subtle seasoning, so that each ingredient can be tasted. Purists use only milk and cream for the sauce; others also use some of the liquid in which the vegetables were cooked."

Regardless of recipe, preparing fanesca invariably requires many hands and at least two days of work.

Valdiviezo starts 24 hours ahead with the soaking of the cod. Then, he and his staff peel and cook the grains, prepare the refrito (fried, spiced onions) and simmer them together over low heat with the rest of the ingredients. The process can take around 5 hours.

"For all Ecuadorians, this dish constitutes a family gathering," Valdiviezo says. "Children and grandchildren peel the grains, and the more experienced family members such as the mother or the grandmother take charge of cooking the refrito and then adding other ingredients."

He says the process at the hotel is much like that: The staff helps prepare the ingredients, and the chef creates the stew.

Rodriguez first made her own fanesca and an Ecuadorian beverage called colada morada to celebrate the indigenous religious ceremony Inti-Raymi — a festival in honor of the Incan sun god, Inti. "It was a way to regain the gastronomic traditions, a way to regain the culture and express it and share it with others," she says.

But, she also makes it to observe Lent. This year, as usual, Rodriguez will be among the many grandmothers preparing fanesca and sharing it with their children, grandchildren and friends.

This recipe is courtesy of Harvard Common Press, publisher of The South American Table, by Maria Baez Kijac.

1 cup fresh or frozen peas, cooked in water to cover until tender and drained

5 cups milk, or more if needed

Soak the salt cod in water to cover overnight, changing the water a couple of times. Drain, cut into bite-size pieces and set aside.

Prepare the fava beans, corn, Great Northern beans, peas, and 1 cup of the lupini beans. Place in a large mixing bowl, cover with plastic wrap and refrigerate until ready to use.

Preheat the oven to 400 degrees F.

Roast the garlic in a baking dish until the cloves are soft, about 20 minutes. Remove from the oven, let cool, and squeeze out the garlic; it should be like a paste. Cover with plastic wrap and refrigerate.

In a small saucepan, combine the rice and water and cook over low heat until most of the water has been absorbed, 25 to 30 minutes.

Mash with a fork, transfer to a bowl, cover and refrigerate.

In a large, heavy casserole, heat the oil, butter and annatto together over medium heat until the butter has melted. Add the cod and cook, stirring, for a couple of minutes. Remove with a slotted spoon and set aside. Add the scallions, leeks, roasted garlic, cumin, oregano, salt and white pepper to the casserole and cook, stirring constantly for 5 minutes. Do not let brown.

Transfer to a blender and add the remaining 1⁄2 cup lupini beans, the peanuts and a little of the milk. Process until smooth.

Return to the casserole, add the cod and remaining milk, and bring to a boil. Reduce the heat and simmer for 5 minutes. Add the squash and cabbage, rice, and bean mixture and simmer for 15 minutes, stirring frequently so it doesn't stick to the bottom of the casserole. Cut the cream cheese into small cubes and add, stirring until it melts. Add the cream and heat through.

Fanesca should have the consistency of a thick soup; if it is too thick, add a little more milk. Taste for salt and stir in the butter, if using.

NOTE: You may serve the cod separately as a side dish. Place the cod pieces in boiling water, cover, reduce the heat to low and simmer for 15 minutes. Drain and set aside until ready to serve. Water is never used in the classic fanesca, just milk.