Accessibility links
A Dip In Global Prices And Demand For Chococlate Create Cocoa Crisis For Ivory Coast's Farmers : The Salt Ivory coast is the world's largest cocoa producer. But a bumper crop combined with a fall in the global demand for chocolate and a dip in cocoa prices are hurting the country's cocoa farmers. 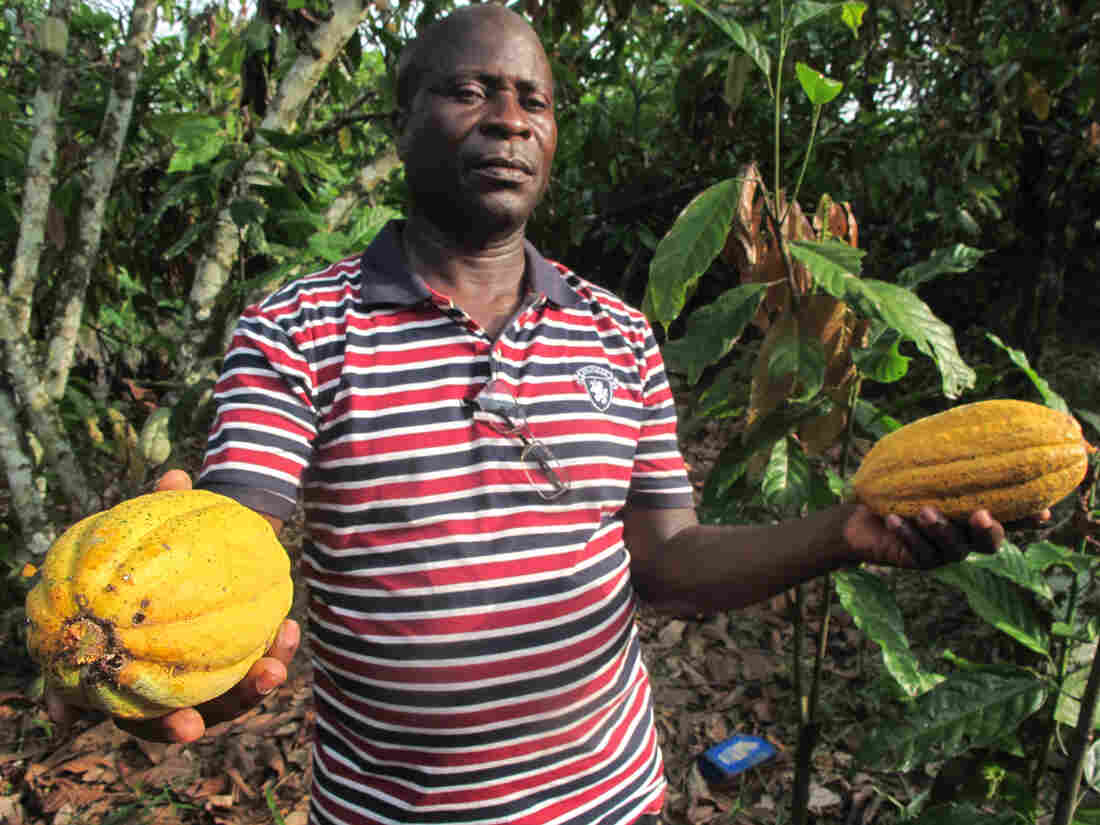 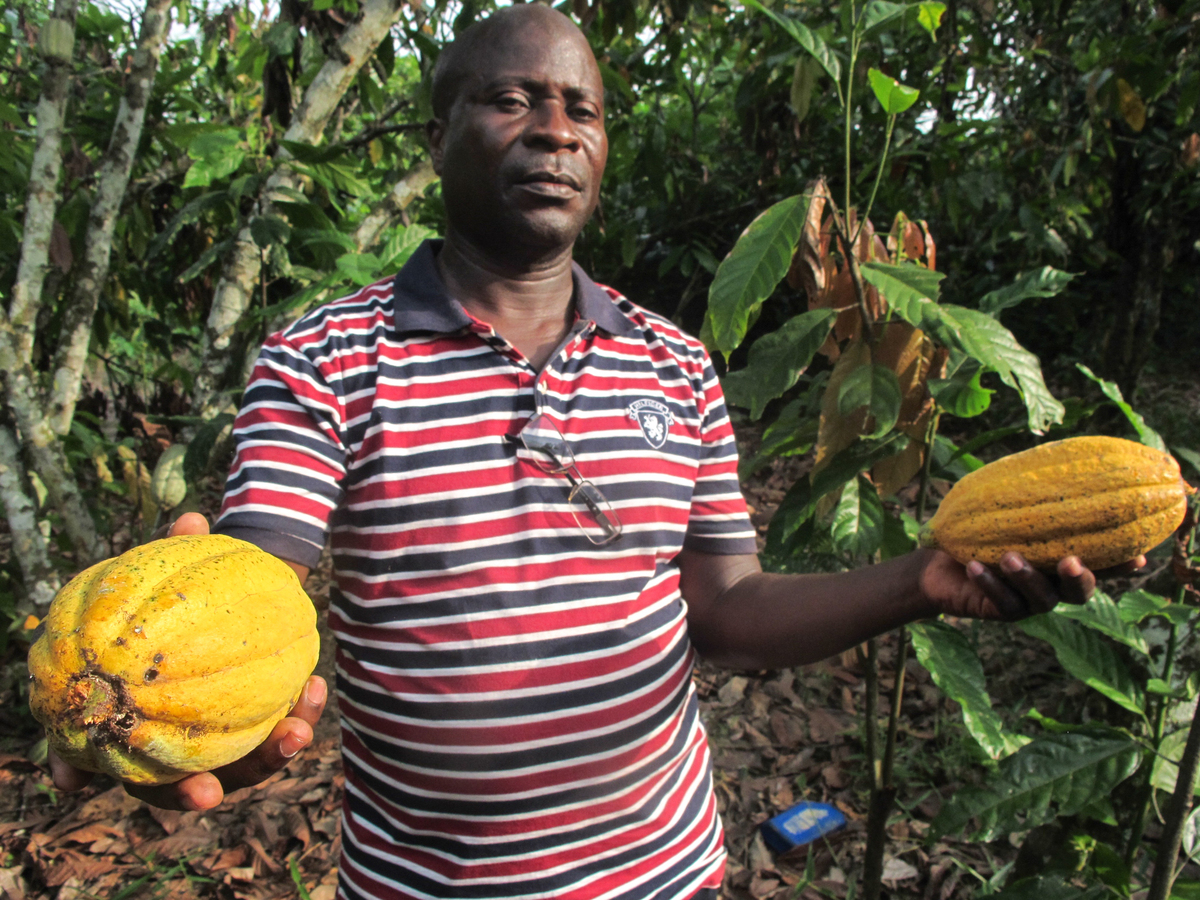 Farmer Georges Kouamé Koffi holding two cocoa pods. Chocolate is made from the almond-sized cocoa beans contained in the pods.

In all his 50 years, Georges Kouamé Koffi has eaten chocolate once. "Someone gave me a piece to try," says the cocoa farmer. "It was lovely." Chocolate bars are on sale at a store in his city of San Pedro, in southwestern Ivory Coast. "But they are too expensive for us," he says.

His family – he has a wife and three children – will eat only grated cassava tonight, as it has on most days since last October when Kouamé Koffi handed a buying agent the first of the 2.8 tons of cocoa he produced this season. All he has to show for his back-breaking work on 12 steamy acres are two receipts - effectively IOUs from a buying agent, who is trying to sell the beans to a wholesaler. Kouamé Koffi is owed just over 3 million CFA francs (about $4,850) for his 2.8 tons, but he is still waiting for his payment.

Seventy per cent of the world's cocoa comes from West Africa. And in Ivory Coast, the biggest cocoa producer in the world, six million people – a quarter of the population – are estimated to depend on the crop for a living.

And Kouamé Koffi is among hundreds of thousands of Ivorians currently suffering from the knock-on effects of a devastating cocoa crisis brought on by a range of factors that are beyond their control. These include the lowest cocoa price on the New York Stock Exchange in eight years, high rainfall creating a bumper harvest, a dip in the world's appetite for chocolate, price fixing, speculation, politics and the mood swings of hedge funds.

As his wife, Janine Allini, 35, grates the white flesh out of a cassava root for dinner, Kouamé Koffi explains: "We grow a little cassava but that is for eating at home. We use the money from the cocoa for everything: the fields, the family, the children's school fees."

Until this year Kouamé Koffi had no trouble meeting those expenses. He says until now, "cocoa has been good to us." His crop yield doubled between 2011 and 2016. Last year he was even able to buy a family vehicle – a motorbike.

But "we are now in debt, even to the local school," says Kouamé Koffi. "Sometimes the teacher sends them home. He says, 'Go, tell your parents to send the money'. I'm scared. I'm scared for the future of my children."

All his neighbors are cocoa farmers too, and are struggling under similarly uncertain circumstances.

Last October, when the Ivorian government set the national price for this year's harvest, it promised farmers 1,100 CFA Francs ($1.80) per kilo. It was a record high price supposedly based on projected international demand and a national count of budding cocoa pods. But farmers say wholesalers aren't offering anything close to that price.

Economists say the cocoa crisis affects the entire country's economy. "Around 30 percent of the debts of the country are in dollars," says Youssouf Carius, managing director of Ivorian analysis firm Pulsar Partners. "If the crisis remains like this, it will impact the financial capacity ... of Ivory Coast to honor that service of debt. That could be really really difficult."

Ivory Coast ships its cocoa in processed form to the world's cocoa wholesalers and chocolate producers. Once farmers harvest the cocoa beans from the pods, they wrap the beans in banana leaves and ferment them for about a week. Then, the beans are dried in the sun before being poured into jute bags and taken to processing plants in San Pedro, the world's busiest cocoa exporting port. 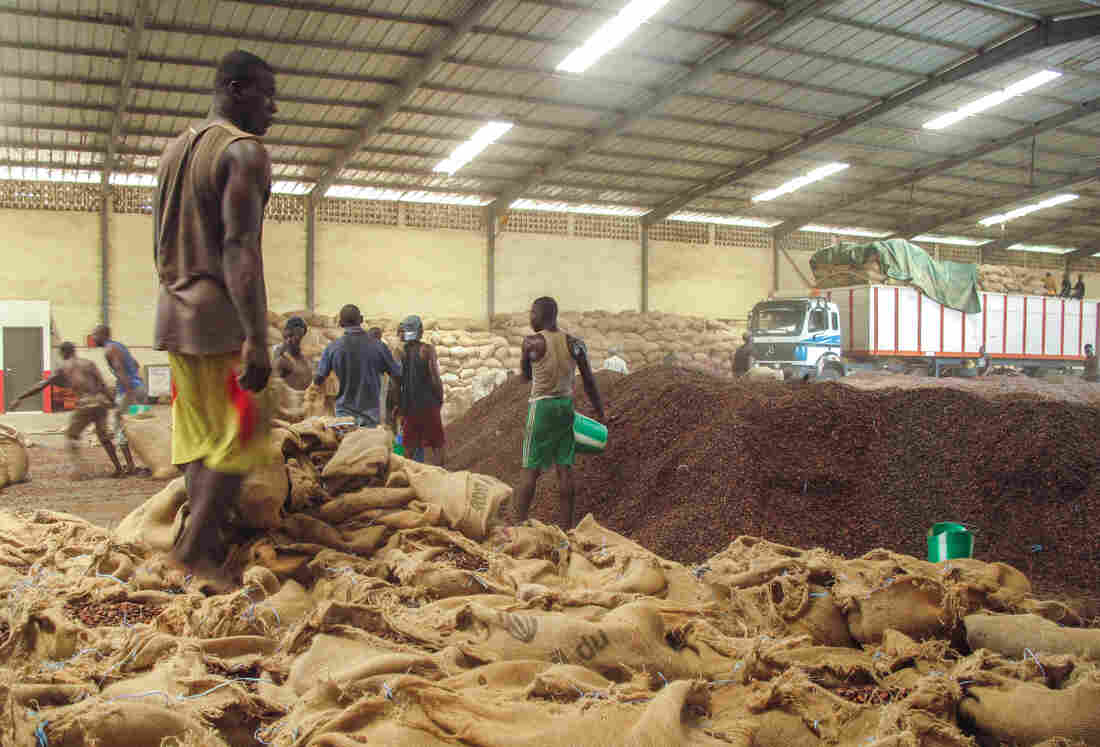 In a large warehouse in the south-western city of San Pedro, men empty sacks of cocoa in the stifling heat. Most processing plants in the city have closed, but some are buying cocoa on the sly. Alex Duval Smith for NPR hide caption 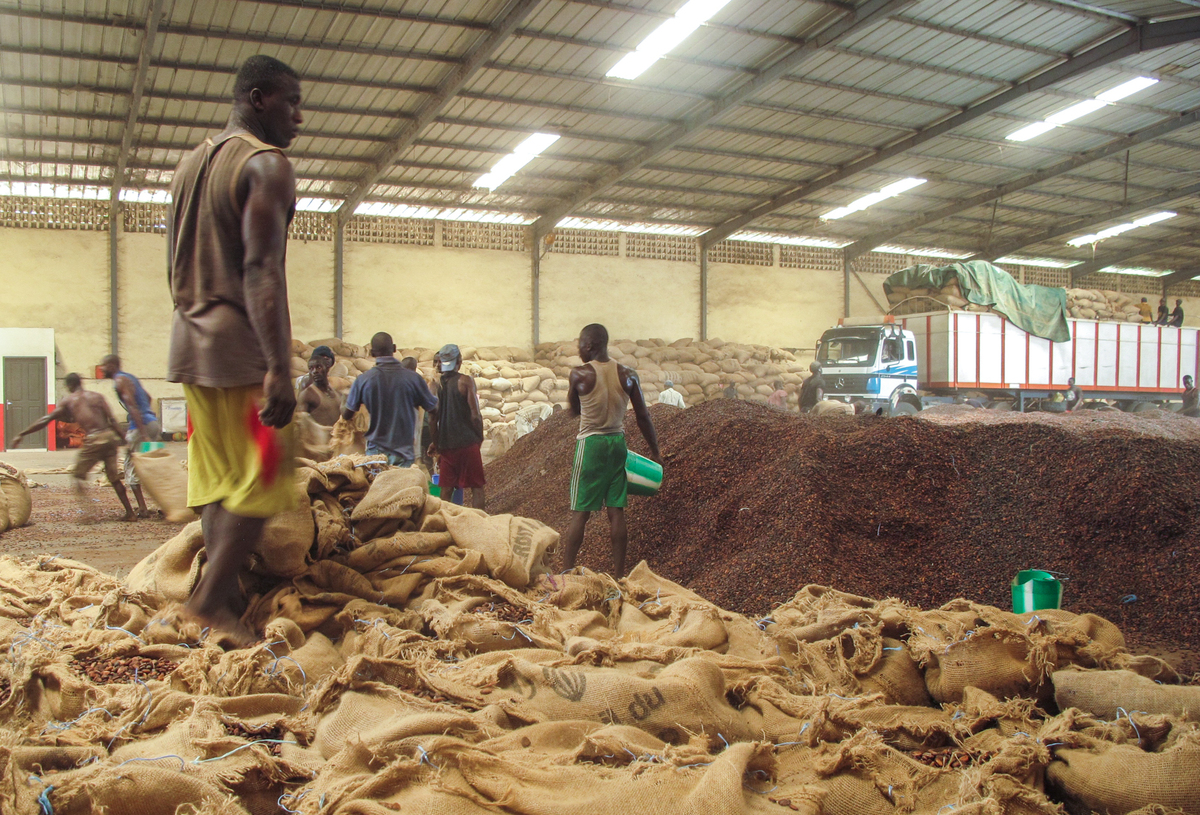 In a large warehouse in the south-western city of San Pedro, men empty sacks of cocoa in the stifling heat. Most processing plants in the city have closed, but some are buying cocoa on the sly.

But right now, the port's cranes are standing idle and the ships are nowhere to be seen. A musty smell hangs in the air around dozens of trucks still carrying fermented cocoa parked outside the Cargill processing plant near the harbor.

Driver Daouda Traoré, 46, has been waiting to unload for three weeks. He is worried that rain will damage his load. "Cargill is the only plant buying beans at the moment so we are all backed up here," he says. "The other factories in San Pedro are closed and not taking any beans."

He says factories are unwilling to pay the high price set by the government because it doesn't offer them a big enough profit margin. "They are waiting to reopen when the international price goes up," says Traoré, who claims he has never seen trucks backed up in San Pedro in such large numbers since he became a driver's apprentice in 1988.

But cocoa is being sold in this city, on the sly. Cocoa farmers' union representatives takes The Salt to see a truck unloading inside a huge warehouse. Thirty men – most of them bare-chested and covered in sweat – empty sacks in a dusty haze that hovers in the stifling heat. The union officials say the men are sifting the content to check for mold and sub-standard beans.

The warehouse owner, who doesn't want to be identified, chooses his words carefully. He refuses to reveal what he paid for the beans and who he has bought them from. Asked how his business is adapting to the current cocoa crisis, he says, "We adapt."

In Ivory Coast, it is illegal to undercut the price set by the government. And yet some farmers "are selling cocoa for as little as 600 francs (96 cents) per kilo," says Blaise Koffi, 45, a union representative and a farmer. "They just have to, otherwise they cannot feed their families. But it is risky." A farmer risks losing his licence if he is caught selling cocoa for less than the government price, he says.

Koffi says that in recent years, the Ivorian government has created a stabilization fund as a buffer to protect farmers against market fluctuations. But farmers say they have yet to see that money."It is there for times like these when we need help to make up for a low international price," says Koffi. "We want the government to trigger payments from it now." 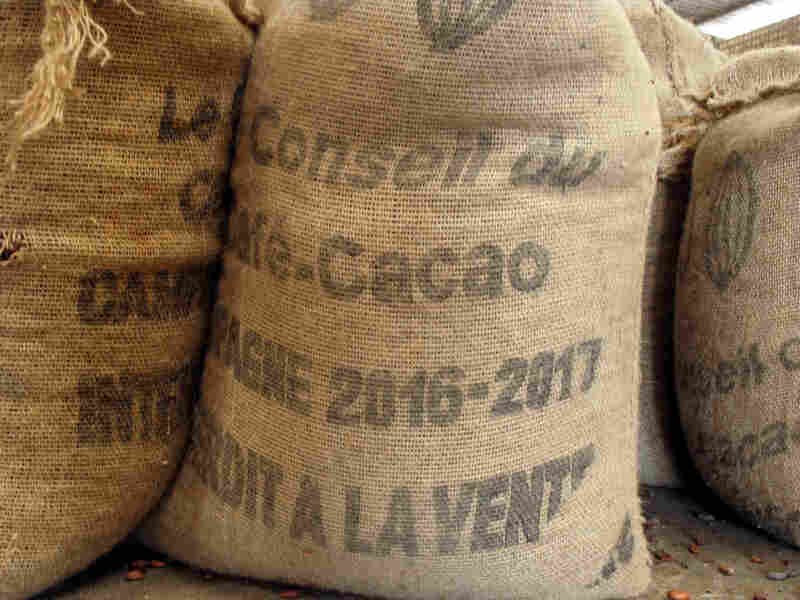 Sacks of cocoa beans at a warehouse in San Pedro. Coffee and Cocoa Council is the government regulator of the Ivory Coast's cocoa industry. Alex Duval Smith for NPR hide caption 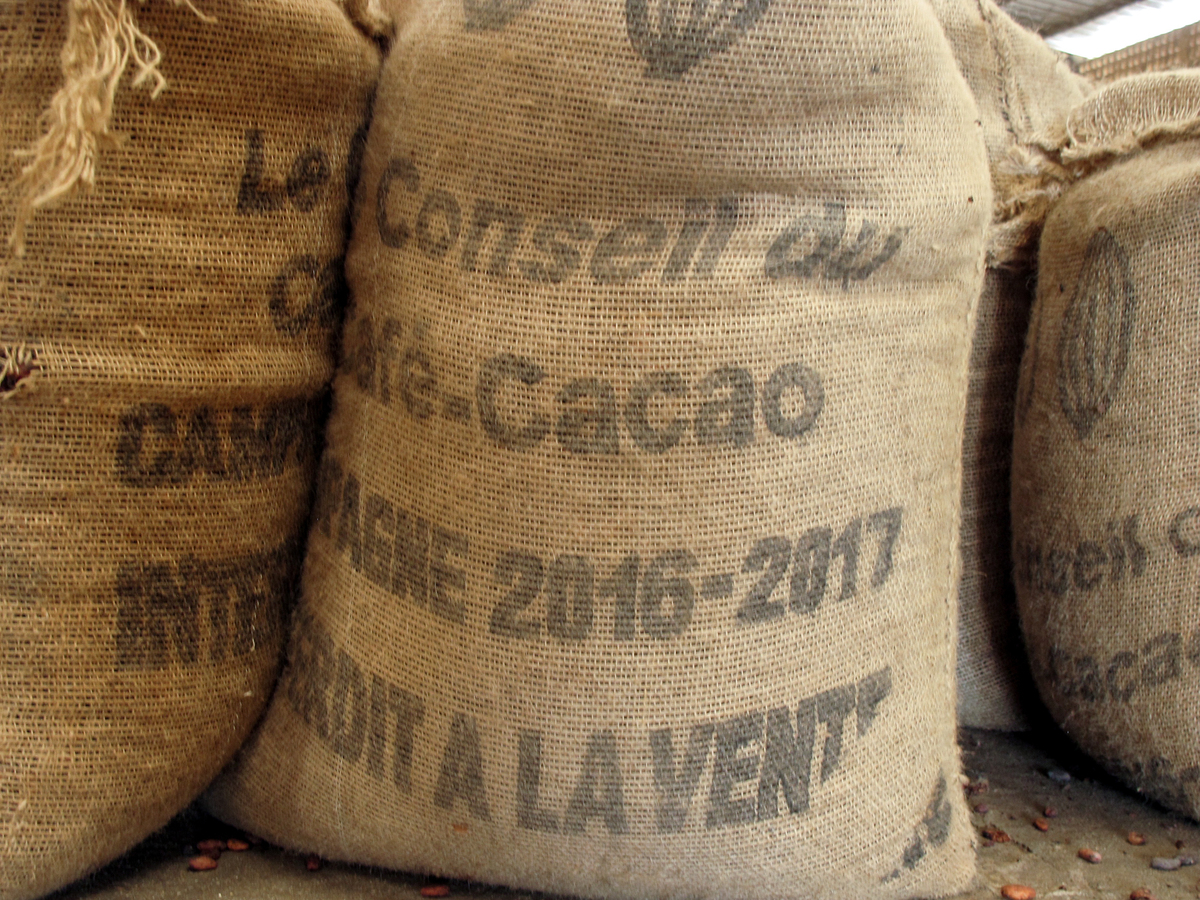 Sacks of cocoa beans at a warehouse in San Pedro. Coffee and Cocoa Council is the government regulator of the Ivory Coast's cocoa industry.

On 15 February, several hundred cocoa farmers demonstrated in the commercial capital, Abidjan. They tried to march on the "Caisse Stab," a building that houses the offices for those stabilization funds. But the protesters were scattered by riot police using tear gas.

After the incident, the government regulator – the Coffee and Cocoa Council (CCC) – agreed to discussions with farmers. The CCC said it was confident it could put pressure on plants in San Pedro to reopen and resume buying cocoa.

But in San Pedro, the trucks are still backed up. On his farm, Georges Kouamé Koffi and his family have yet to receive their payment. He takes me to see some cocoa trees near his homestead. We wade through brown leaves lying ankle-deep on the ground.

Kouamé Koffi is not just worried about his children's future. "If you look around you at the trees, you will see that the insects are in charge," he says, referring to pests now attacking his trees. "We need money to spray chemicals. We need income to be able to take care of our fields. If we do not spray, soon the entire plantation will become a skeleton, and that would be very serious."