Accessibility links
Unscrambling The Nutrition Science On Eggs : The Salt As more research suggests some degree of dietary cholesterol is harmless, if not healthy, the egg's reputation is slowly returning. Yet some experts worry the science is being misinterpreted and spun. 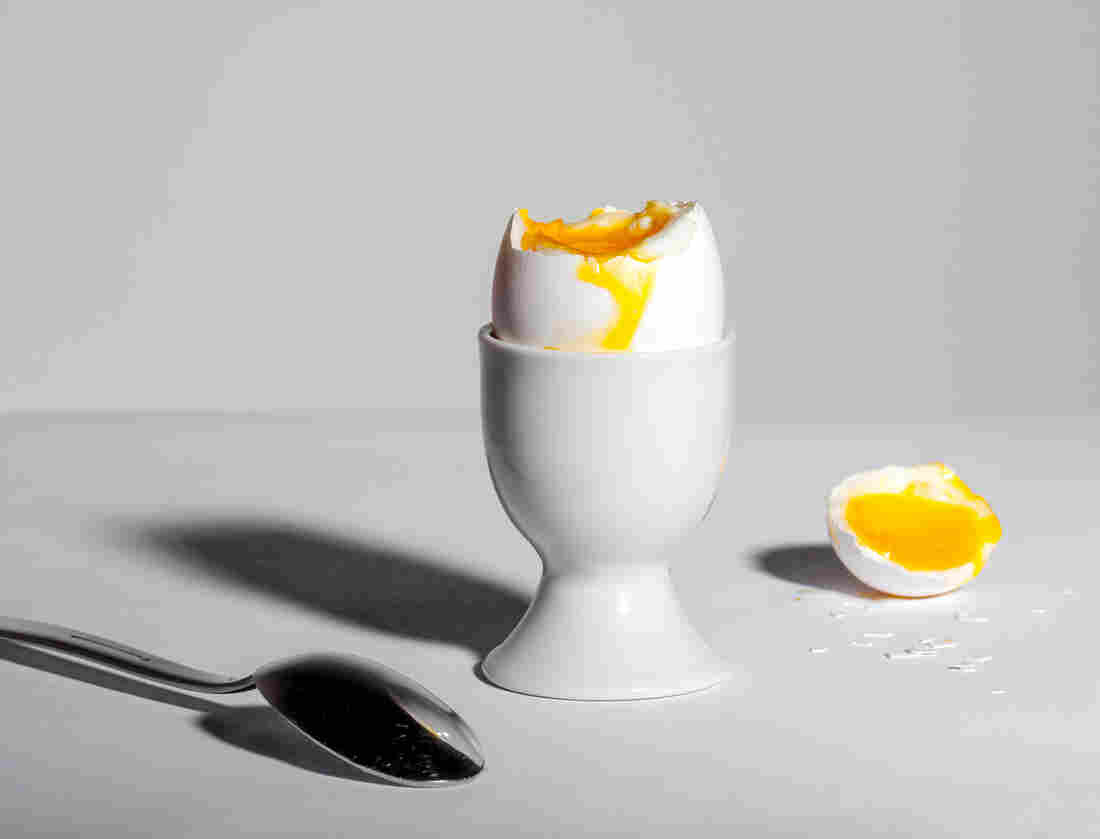 As more research suggests some degree of dietary cholesterol is harmless, if not healthy, the egg's reputation is slowly returning. Yet some experts worry the science is being misinterpreted and spun. Kelly Jo Smart/NPR hide caption 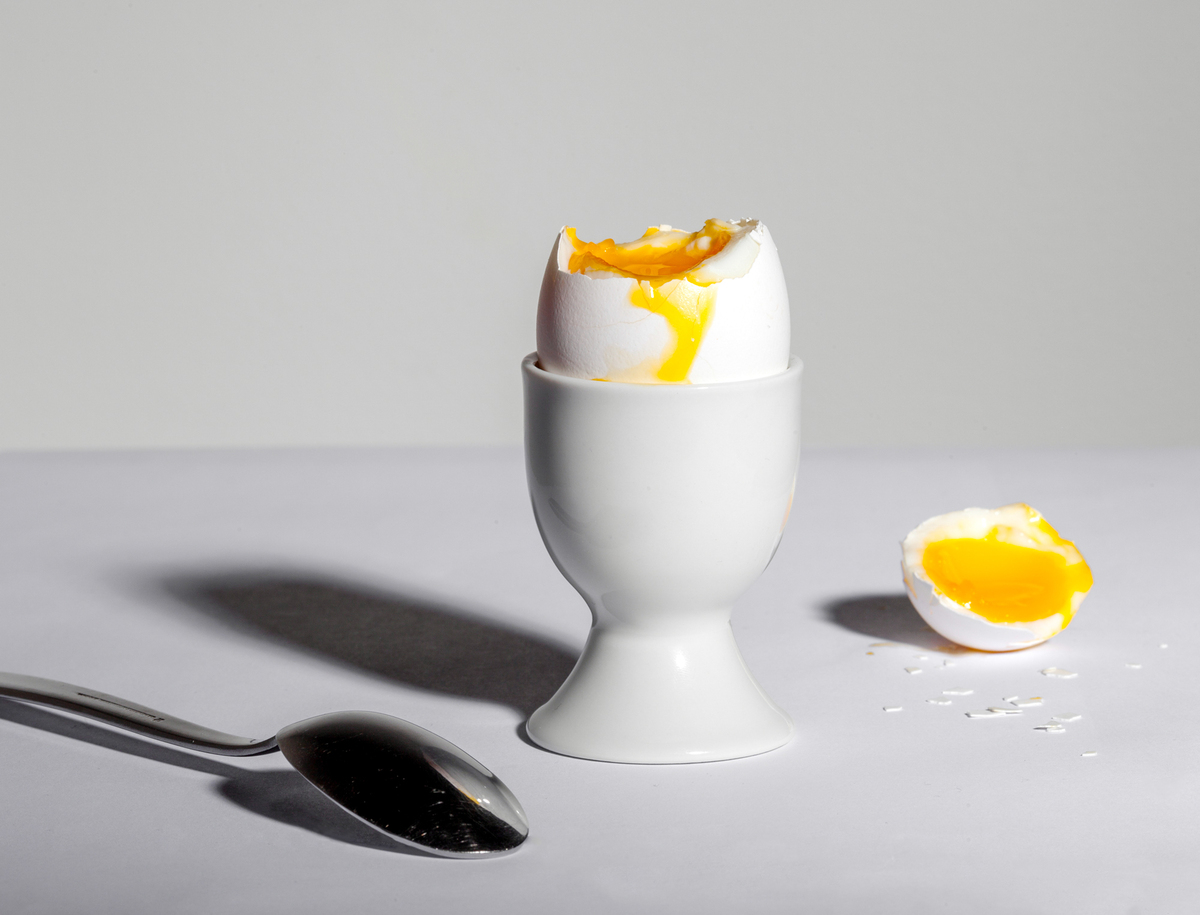 As more research suggests some degree of dietary cholesterol is harmless, if not healthy, the egg's reputation is slowly returning. Yet some experts worry the science is being misinterpreted and spun.

Historically, when humans have sought a reliable source of calories — particularly one that can be readily nabbed from an unsuspecting animal with minimal exertion and zero horticulture skills — we have often turned to eggs.

We've pilfered the ova of countless creatures since Neolithic times. But it is the nutritive and symbolic capacities of the humble bird egg, primarily that of the chicken, that we have most consistently championed: reliable nourishment, a hangover cure, an emblem of rebirth — when necessary, a supreme projectile.

As P.G. Wodehouse asked in his 1906 novel, Love Among The Chickens, "Have you ever seen a man, woman, or child who wasn't eating an egg or just going to eat an egg or just coming away from eating an egg? I tell you, the good old egg is the foundation of daily life."

Yet in the late 1970s, our egg appreciation soured. Doctors realized that excess cholesterol in our blood predicts a higher risk of heart disease. Cholesterol is a fatty substance necessary for digestion, cellular function and the production of hormones. When too much of it shuttles through our blood supply, it can accumulate on artery walls and up our risk for heart attack and stroke. By extension, many physicians of the day assumed that eating high-cholesterol foods like butter, red meat and eggs was probably disastrous for our health and should be avoided. Fat phobia ensued.

We now know it's more complicated than this.

New Dietary Guidelines Crack Down On Sugar. But Red Meat Gets A Pass

Cholesterol no doubt contributes to heart disease by literally blocking our blood vessels. And eating cholesterol can raise levels of it in the blood, but, as a growing body of research has shown, not by that much. Consuming sugar, transfats or excessive saturated fat can be more harmful to cholesterol levels than dietary cholesterol itself. Most of the cholesterol in our bodies we make ourselves in the liver, and total body levels are heavily influenced by genetics, gender and age.

As more and more research suggests that some degree of cholesterol consumption is harmless, if not healthy, the egg's reputation is gradually returning. Yet some experts worry that the science is being misinterpreted and spun by the media, the egg industry and even opportunistic doctors. Diet science tends to be presented and perceived as black or white. Take butter: bad for us one day, not so bad the next. It's an eternal cycle of self-help revenue. Unfortunately, health and science are rarely this simple. And neither is the egg.

Our collective fear of cholesterol and other fats in part traces back to results from the famous Framingham Heart Study. Launched in 1948 and still going today, the study began by tracking the lifestyles of 5,209 people from Framingham, Mass. The results, which began to appear in journals in the early 1960s, led to our current understanding of heart health and how it's affected by factors like exercise, smoking and diet.

Dr. Walter Willett, chair of the Harvard T.H. Chan School of Public Health's Nutrition Department, was one of the first physicians to realize that while the Framingham findings showed that cholesterol in the blood is associated with a higher risk of heart disease, no studies at that point had shown that cholesterol consumption actually increased blood levels.

Willett and his colleagues have since studied thousands of patients for years and have found no evidence that moderate dietary cholesterol or egg consumption increases the risk for heart disease and stroke, except in people with a strong genetic risk for high cholesterol and possibly people with diabetes.

His findings echo those from a 2013 study published in BMJ reporting that eating one egg per day is not associated with impaired heart health.

"There is now general consensus that dietary cholesterol, primarily consumed in eggs, and to a lesser extent in certain seafoods like shrimp, has a relatively small effect in raising blood cholesterol," explains Dr. Bruce Griffin, who studies the links between nutrition and cardiovascular disease at the University of Surrey in England. Griffin's own study from 2009 found that overweight people prescribed a low-calorie diet that included two eggs a day actually saw a drop in cholesterol levels.

The renaissance around cholesterol is not lost on guideline committees, many of which are softening their stance.

In 2013 the American College of Cardiology and American Heart Association rattled the medical community by releasing new cholesterol guidelines that abandoned the long-standing goal of keeping our "bad cholesterol" — our LDLs — under 100. The guideline authors based their decision on the lack of randomized-controlled trials supporting a specific target. Too many LDLs tumbling through our bloodstream are no doubt bad, they acknowledge, but dangerous levels in one person might be tolerable in someone else. Also, chasing a specific target through overtreatment could subject patients to drug side effects, which need to be considered.

The 2015 Dietary Guidelines for Americans — co-developed by the U.S. Department of Agriculture and U.S. Department of Health and Human Services — also broke with tradition. General clinical dogma had previously held that total cholesterol should be capped at 300 milligrams per day in healthy people, roughly the amount found in 1 1/2 average-sized chicken eggs. Yet the new guidelines don't include a specific numerical goal. As the authors wrote, "available evidence shows no appreciable relationship between consumption of dietary cholesterol and [blood] cholesterol ... Cholesterol is not a nutrient of concern for overconsumption."

But some nutrition scientists worry that this softened official line on cholesterol sends the wrong message.

"The lack of dietary cholesterol recommendations in recently released ... guidelines is controversial," says Dr. Wahida Karmally, director of nutrition at the Irving Institute for Clinical and Translational Research at Columbia University. "This should not be interpreted as an affirmation to ignore dietary cholesterol, since there is clear evidence that it does increase LDL-cholesterol," she says.

And it does. But by some estimates, only by around 10 percent.

Karmally also points out the danger in generalizing study results to the entire population. She notes that a significant portion of population — up to 30 percent, some estimate — are thought to be "hyper-responders," meaning they experience abnormally high spikes in blood cholesterol as a result of consuming cholesterol. Most experts agree that hyper-responders need to be especially diligent about limiting cholesterol consumption.

Dynamic Duos: How To Get More Nutrition By Pairing Foods

Dr. J. David Spence, a professor of neurology and clinical pharmacology at Western University in London, Ontario, a known egg detractor, is livid at how the 2015 guidelines were interpreted.

"The egg industry and the media seized on the first paragraph of the media release of the new guideline, which said there is not strong data on which to base a specific numerical limit to a dietary cholesterol intake," he points out. "But if we read on, the guidelines recommend that cholesterol intake should be as low as possible and part of a generally healthy diet."

The report also cautions that foods high in cholesterol are often also high in saturated fat, which itself increases blood cholesterol and the risk of heart disease.

Spence likens Big Egg to Big Tobacco in its loose interpretation of scientific data in the interest of profit.

In December 2016, a meta-analysis published in the Journal of the American College of Nutrition reported that people who eat an average of one egg a day have a 12 percent lower risk for stroke compared with those who eat fewer eggs. The study also found no link, whether positive or negative, between egg consumption and coronary heart disease.

Yet note the fine print: The study was partially funded by something called the Egg Nutrition Center, a self-described "nutrition education division of the American Egg Board (AEB), a national checkoff program on all egg farms with more than 75,000 hens."

"I am not trying to put egg farmers out of business," says Spence. "[But] the propaganda of the egg industry rests on a half-truth."

He is referring to the fact that many past studies funded by the egg industry that support egg consumption measured fasting cholesterol levels rather than levels after a meal. Most of us spend a good portion of our day in a post-meal state, when our cholesterol climbs to higher levels — and when it presumably does more damage to our arteries. What's more, by not measuring cholesterol after meals, researchers are unable to identify the hyper-responders, for whom consuming cholesterol poses added health risks.

Spence's true gripe lies not with the egg itself, but with the yolk. One jumbo egg yolk contains around 240 milligrams of cholesterol, nearly as much as an entree I was frightened to Google: the "2/3 lb. Hardee's Monster Thickburger." In an email, Spence recommended I try his omelet and frittata recipes while writing this article. Both are made with egg whites, which he cedes is a healthy source of protein.

Cholesterol aside, Willett points to other possible health benefits of eggs. They contain some unsaturated fats, associated with a lower risk of heart disease; also iron and a number of vitamins and minerals. And a new Finnish ­study — one not affiliated with the egg industry — even suggests that eating one egg a day could improve long-term cognitive function.

"Overall it is hard to say that eggs are good or bad," says Willett. "They're almost certainly no worse than sugary breakfast cereal or a bagel with cream cheese — probably better. In terms of health, they seem to be in the middle somewhere."

However, in the interest of a healthy breakfast, before cracking into an egg, Willett says to consider fruit, nuts and whole grains, all thought to lower blood cholesterol and the risk of heart disease.

"A bowl of steel cut oats topped with nuts and berries will almost certainly reduce risk of heart disease compared to a breakfast centered on eggs," he says. "That's what I have most mornings, sometimes adding a bit of yogurt. But eggs are clearly not a poison pill."

Bret Stetka is a writer based in New York and an editorial director at Medscape. His work has appeared in Wired and Scientific American, and on The Atlantic.com. He graduated from the University of Virginia School of Medicine in 2005. He's also on Twitter: @BretStetka