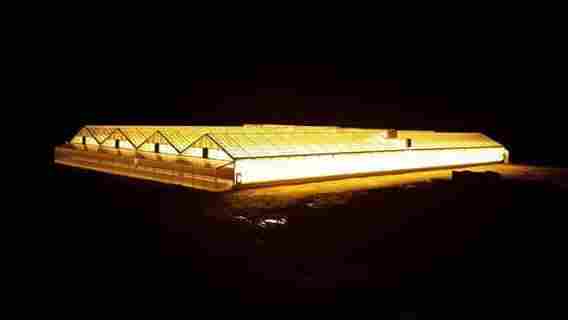 The lights inside LEF Farms' new greenhouse have replaced starry skies with a jarring and unnatural glow. Courtesy of Dennis Jakubowski hide caption 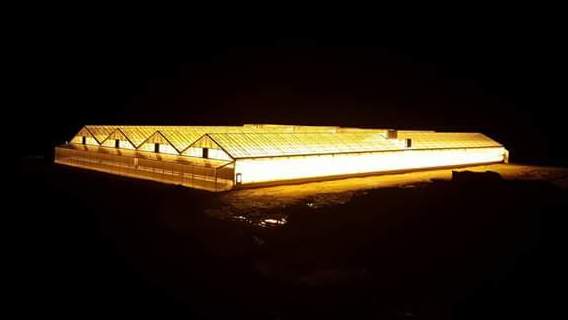 The lights inside LEF Farms' new greenhouse have replaced starry skies with a jarring and unnatural glow.

The best weather in all of New England right now is inside the new greenhouse at LEF Farms in Loudon, N.H. It's 75 degrees, August-level humid, with fans pushing out a soft breeze.

Operations manager Bob LaDue points out the beneficiaries of this artificial climate.

"That's mezuna and cress," he says, naming two of the seven varieties of baby greens grown at LEF Farms. "This is part of our spice mix."

Built on the site of an old gravel pit, LEF Farms is investing $10 million to grow gourmet lettuce indoors year-round in the Granite State.

"It was a big investment, but we saw that the market was great for this kind of product," says Henry Huntington, CEO of LEF Farms. "Folks are looking for locally grown. They want to know where their food is coming from and how it's grown."

And how it's grown here is pretty spectacular. Robotic arms and conveyor belts shuffle the seedlings around the football-field sized greenhouse. Sensors closely track growing conditions, and nutrients are delivered in precise doses through a hydroponic system.

Not every element is under human control, however. During a tour, bright sunshine suddenly breaks through the clouds.

"We love sun," says LaDue. "We expect with our location, latitude and longitude in this part of the country, we should be able to get about 80 percent of our light requirements from the sun."

And the other 20 percent? That comes from high-powered grow lights.

Lights that — because of shorter winter days — LEF Farms has been running after the sun sets. The problem is, when you turn on lights in a room made of glass, the light doesn't stay inside that room. 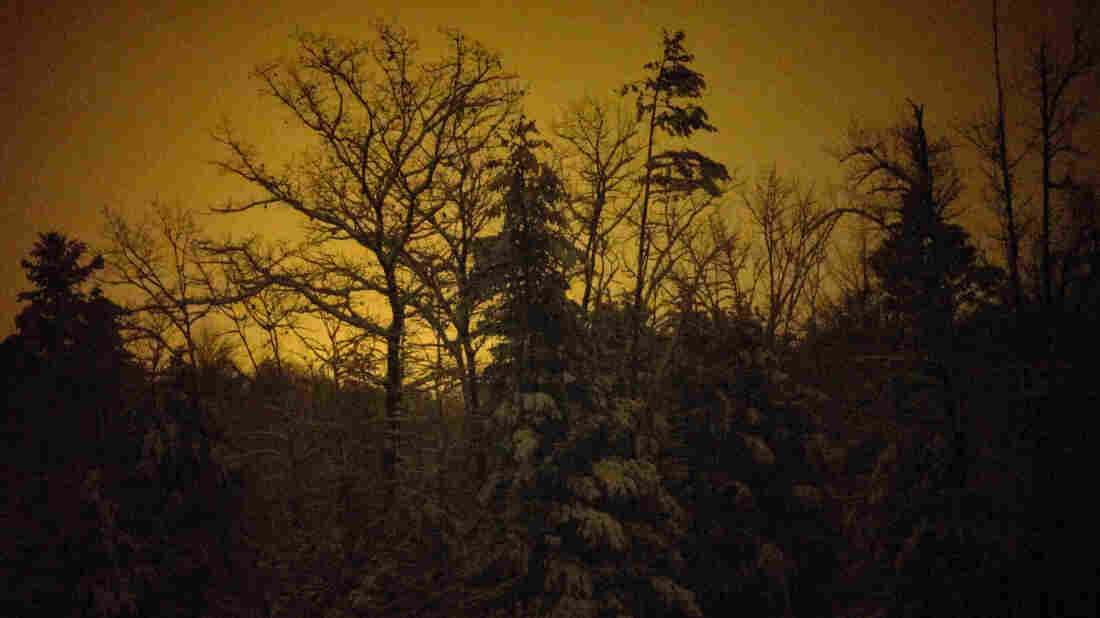 The eerily bright orange glow from the greenhouse has some neighbors seeing red. Courtesy of Shawn Muzzey hide caption 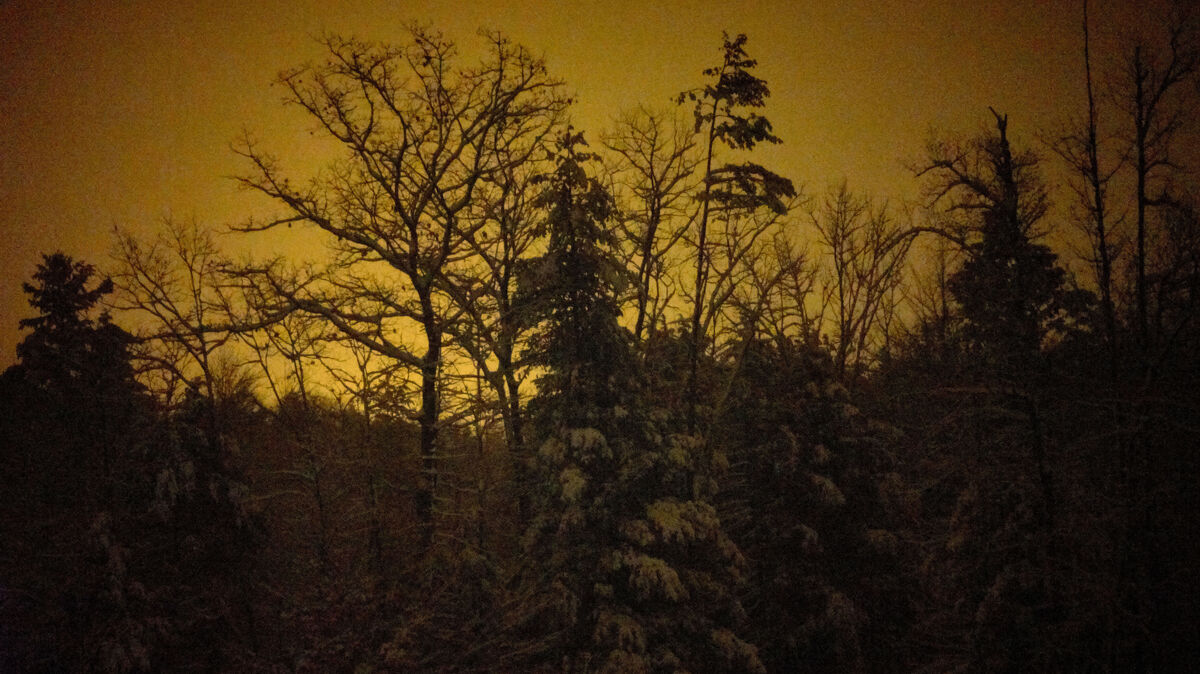 The eerily bright orange glow from the greenhouse has some neighbors seeing red.

"I was pissed when I saw that light. I just couldn't believe it," says Tom Schneider, whose home is six miles (as the crow flies) from LEF Farms. "I thought, 'Now, how can you do that?' "

From his home up on a ridge, Schneider has sweeping 360-degree sight lines. At night, the view was nothing but stars. That is, until this very orange and unnatural glow started penetrating the sky. His first thought was how it might affect his view.

"And I think that sounds kind of selfish," says Schneider. "I should be more concerned with the ecological, and the physiological and psychological impacts this might have, but initially I thought, aesthetics."

LEF Farms does have a shade curtain installed at the greenhouse, but it's porous — more porous than the company thought it would be. To try to appease neighbors, LEF now turn the lights off during the evening and then back on after midnight.

But that concession isn't enough for everybody.

At the January meeting of the Loudon Planning Board, people vented frustration with LEF Farms. They pointedly questioned board members as to why permits were issued without first completing an environmental impact study, and why neighboring towns weren't informed of the project.

"And what's this going to do to our property values?" asked a Loudon resident wearing a dusty NASA hat. "Who is going to want to buy a house in Loudon when the sun is out at midnight?"

'Somebody dropped the ball'

This isn't the first light-pollution complaint involving Huntington. He and his family run other greenhouses in Loudon — very successful greenhouses — and there have been legal challenges concerning the lights at those locations.

Huntington also happens to be on the Loudon Planning Board. He recused himself during this portion of the meeting, and addressed those in attendance. 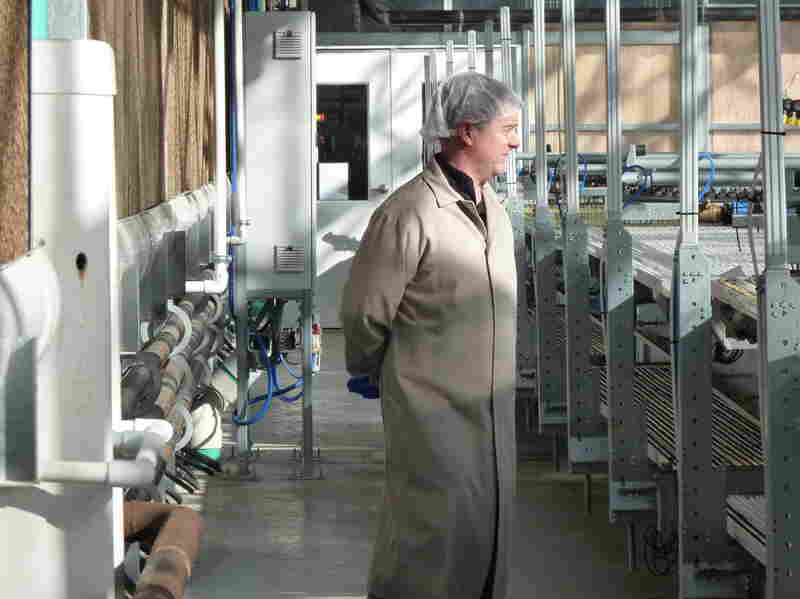 Bob LaDue, operations manager at LEF Farms, says: "I'm the guy that has to turn them on and drive home and see them in the rear-view mirror and know that people are upset with me." Todd Bookman/New Hampshire Public Radio hide caption 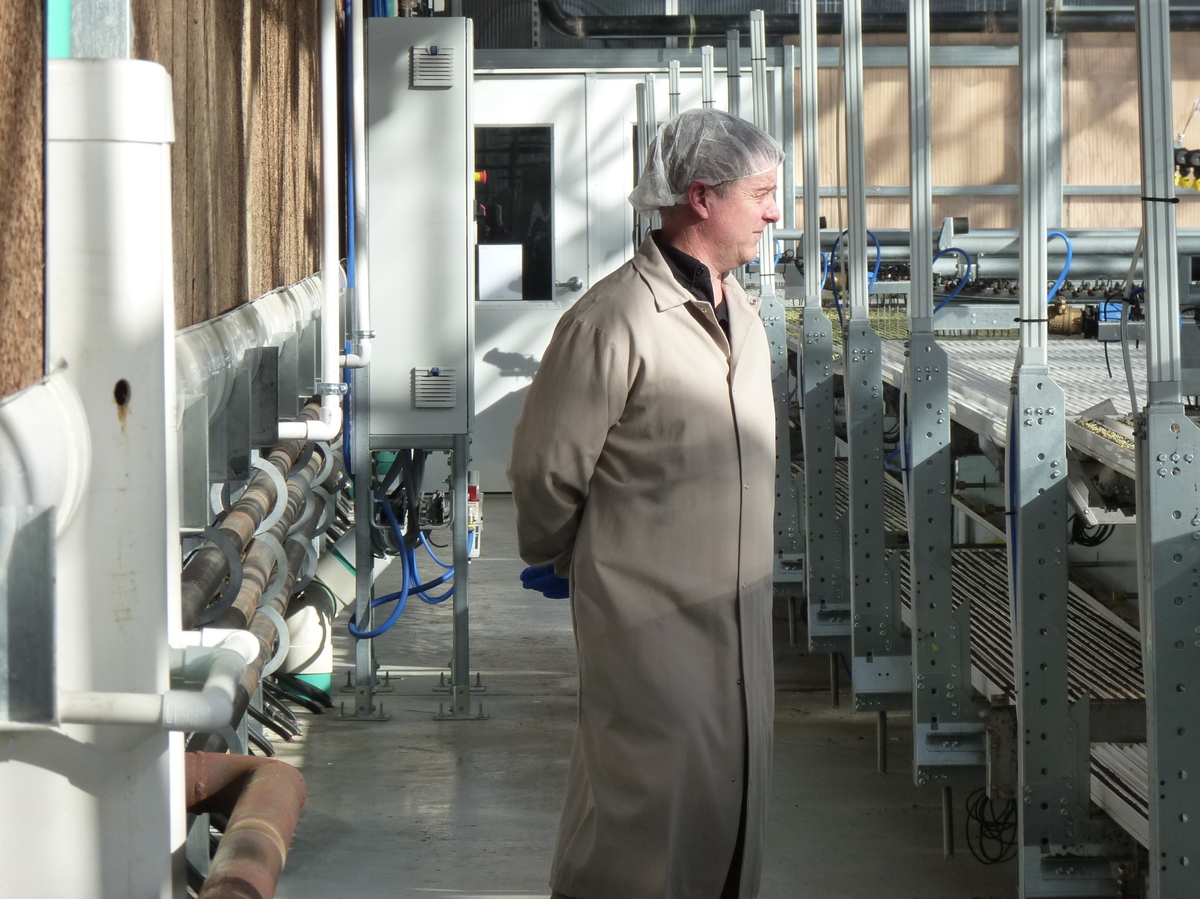 Bob LaDue, operations manager at LEF Farms, says: "I'm the guy that has to turn them on and drive home and see them in the rear-view mirror and know that people are upset with me."

Huntington has plans to build another greenhouse in either 2018 or 2019, and when that building is complete, he says he can halt operations at the current greenhouse and install thicker shade curtains. Until then, LaDue plans to continue turning on the lights.

"I'm the guy that has to turn them on and drive home and see them in the rear-view mirror and know that people are upset with me. It's not a great feeling," he says.

All this remorse and controversy over some baby greens.

Many neighbors interviewed for this story say they do support the concept of locally grown food, and support LEF Farms efforts to grow produce in Loudon. Even Schneider, the resident who lives six miles from LEF, wants to have sustainable agriculture in his community.

"I can think of many other businesses I wouldn't want to see there," he says. "So I am grateful that we have a greenhouse. I just think somebody dropped the ball."

Huntington jokes that if he sells more greens, he can expand sooner and get the new shade curtains in place faster. Schneider jokes that if nobody buys the greens, those lights would probably get shut down pretty quickly, too.

This story comes to us from member station New Hampshire Public Radio, where Todd Bookman is a reporter. You can hear the story here.