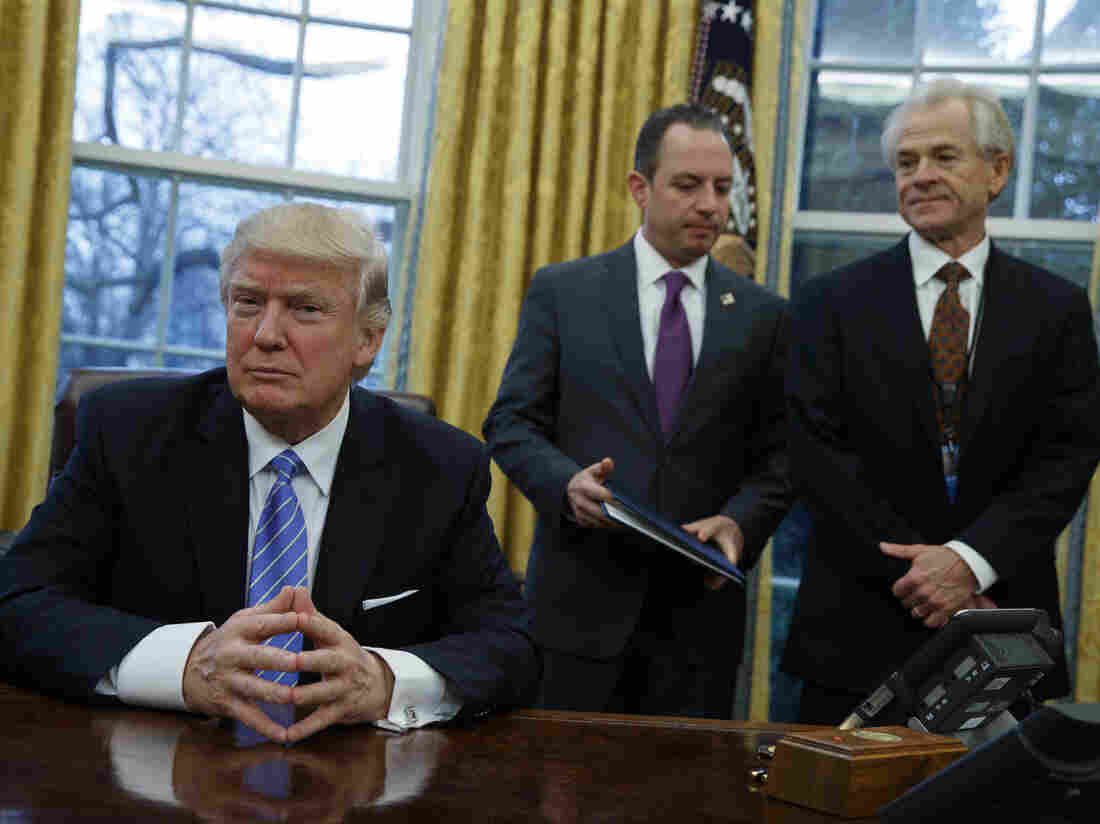 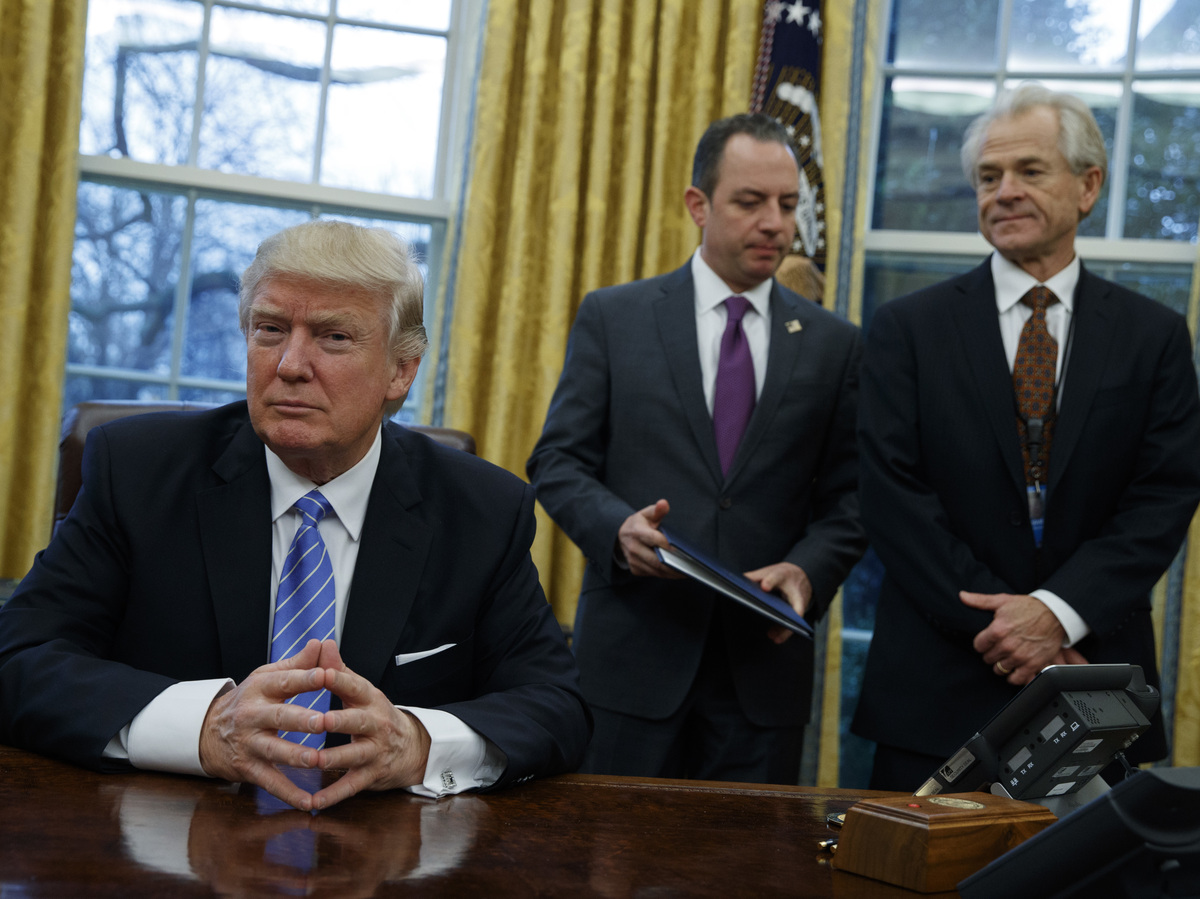 The head of the president's National Trade Council this week offered a decidedly bleak and suspicious view of global trade. Peter Navarro says foreign companies buying up U.S. corporations are posing a threat to national security.

That might sound bad, but it's a fringe view that puts him at odds with the vast majority of economists.

Speaking at an economics conference in Washington, D.C., Navarro issued a warning. He said that bad trade policy is making America less safe. "Today we do not have a single company in the U.S. that can make flat panel displays for our military aircraft," he said.

Here is what Navarro says he's worried about. The U.S. imports more than it sells to the rest of the world. That trade deficit means some of our trading partners end up with a lot of cash. And they use some of it to invest in the U.S. They buy U.S. Treasuries, stocks, real estate. And sometimes they buy up U.S. companies. Most economists see this as just part of global trade, which overall benefits all the countries involved.

But Navarro has a darker view: "Suppose instead that it is not a benign ally buying up our companies, our technologies, our farmland and our food supply chain, and ultimately controlling much of our defense industrial base. Rather it is a rapidly militarizing strategic rival intent on hegemony in Asia and perhaps world hegemony."

In that scary-sounding scenario, presumably a country such as China would somehow try to buy up U.S. defense contractors and attempt to take over the world. And then Navarro said, "We have already begun to lose control of our food supply chain."

That statement in particular sounded pretty off-the-wall to a number of economists. Is the U.S. really losing control of its food supply?

"I was completely confused by that comment," says Dermot Hayes, an agribusiness economist at Iowa State University. "It's an uninformed statement."

"There's nothing that's going on that would say that other governments are buying essential portions of our agricultural infrastructure," he adds.

Hayes notes that in 2013 a Chinese company did buy Smithfield Foods — a big pork producer. But he says that turned out to be a really good thing.

"To Iowa and the Midwest that's been a great purchase because suddenly our pork exports to China skyrocketed," he says, and that's meant more jobs in the U.S. "As a result of some of the optimism created by that purchase, we're building two new packing plants and we're expanding our pork industry by 4 or 5 percent and it's a labor intensive industry and so we're creating a lot of jobs."

So Hayes says Navarro just isn't making any sense. Hayes says the reality is the exact opposite: The U.S. is a massive exporter of food. So China, Japan, Mexico and lots of other countries rely on the U.S. for their food supply.

But Hayes says all the anti-trade talk from the Trump administration is making those countries nervous.

Joe Glauber, an economist with the nonprofit International Food Policy Research Institute, agrees. "It does tend to spook people and I think that that's the real damage that's being done right now," he says.

Glauber says farmers and farm groups in the U.S. are worried that other countries are starting to look elsewhere to diversify imports for their food supply. "They get concerned when they read reports that Mexico now is looking for potentially alternative sources of supply for soybeans and corn," he says.

Hayes says he's worried China and Mexico and other countries might establish more agricultural trade ties to South America. And he worries that could hurt U.S. farmers. "Yeah, I'm very concerned," he says.

All this is not to say that foreign ownership of companies never creates a national security problem. Douglas Irwin, a Dartmouth College trade economist, says that economists already recognize that national security considerations should override any adherence to free trade. "Adam Smith in The Wealth of Nations going way back said defense is more important than opulence, so economists have always recognized that," Irwin says.

But Irwin says the government already reviews foreign purchases of companies with military or strategic technology or significance — and it sometimes blocks those deals. He says Navarro just didn't provide convincing evidence that there's actually anything to worry about here.

And Irwin says this latest speech underlines a disconnect within the Trump administration. He says the president has surrounded himself with some advisers who have unusual or extreme views. But that's not the case for Cabinet-level people who have been confirmed so far to run the various departments involved in trade and economics, Irwin says.

"You know, in the White House we have Steve Bannon and Peter Navarro — these are people without policy experience, but they have very strong views," Irwin says. But he says, "At the State Department, the Treasury and Commerce you have people who have either business experience or who have been around for some time and are much more levelheaded."

So for Irwin, the question is, which of those two camps is actually going to be crafting trade policy?