Accessibility links
Why Pu'er, A Complex Tea, Draws Rapt Fans And Big Dollars : The Salt Grown in China's remote Yunnan Province, this legendary, fermented dark tea changes as it ages. Like a fine wine, pu'er is sipped, savored and collected by devotees. 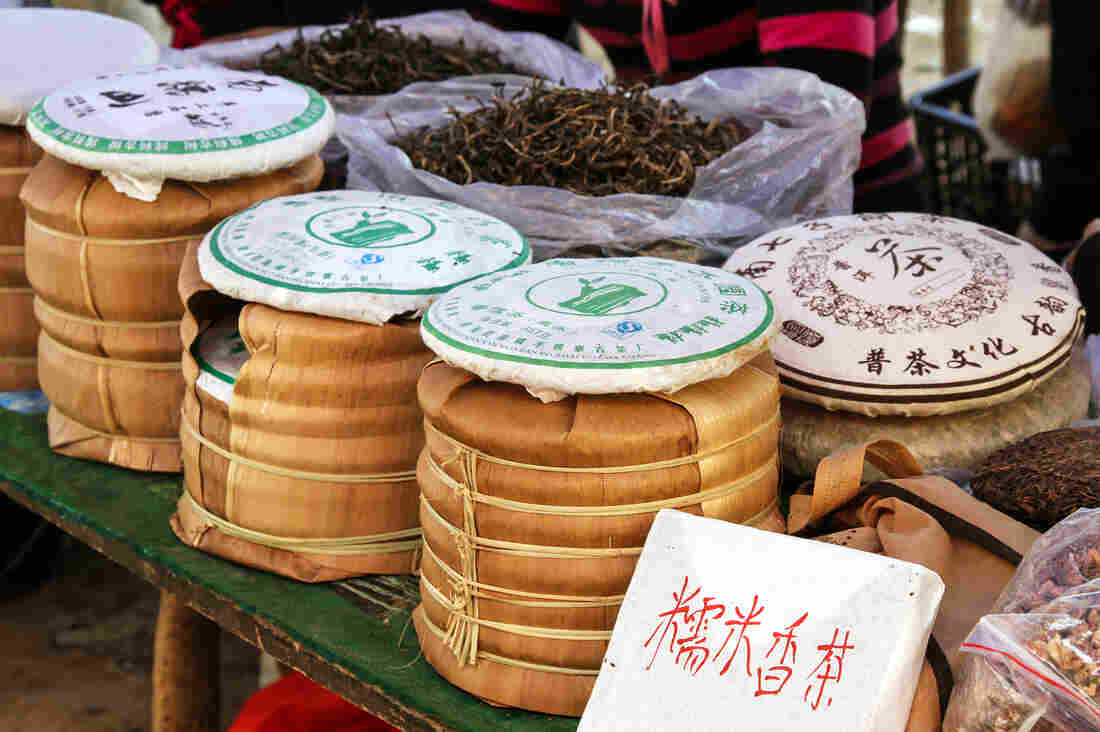 Pu'er tea is packed in bings at a market in China's Yunnan province. A cake of Pu'er continues to change as it ages, and bits of tea are chipped off in order to brew. Ellen Mack/Flickr Vision via Getty Images hide caption 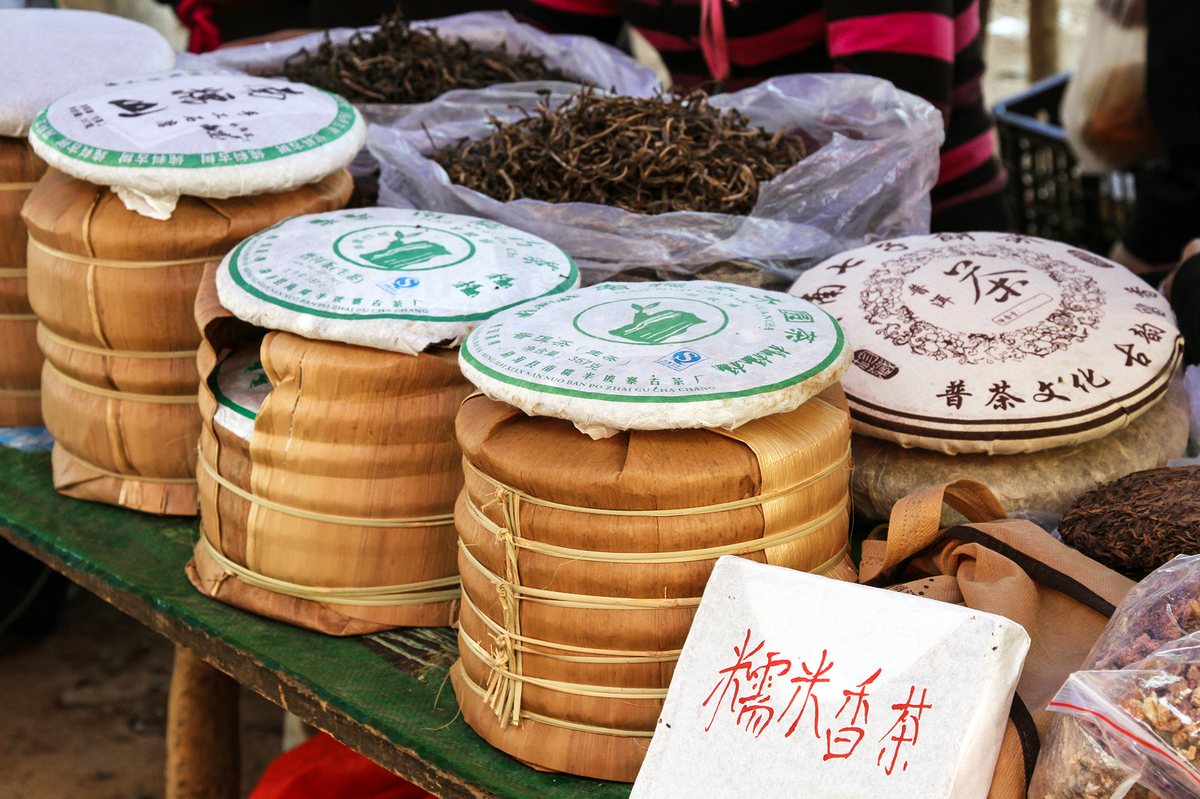 Pu'er tea is packed in bings at a market in China's Yunnan province. A cake of Pu'er continues to change as it ages, and bits of tea are chipped off in order to brew.

"It tasted like rotten compost," recalls Max Falkowitz, executive digital editor of the food and wine magazine Saveur, of the time in college he sipped one of the most sought-after teas in the world. That would be pu'er — a legendary, fermented dark tea sourced from ancient trees in the isolated forest canopies of the Yunnan Province in southwest China.

Falkowitz didn't give up on pu'er. He tried a different variety years later, when visiting a tiny tea shop in Flushing, N.Y.: "It was like nothing I'd ever had," he told NPR. "Gentle, elegant and comforting, like an embrace from a parent. I save it for really soft, snowy days now. It's my reset button." 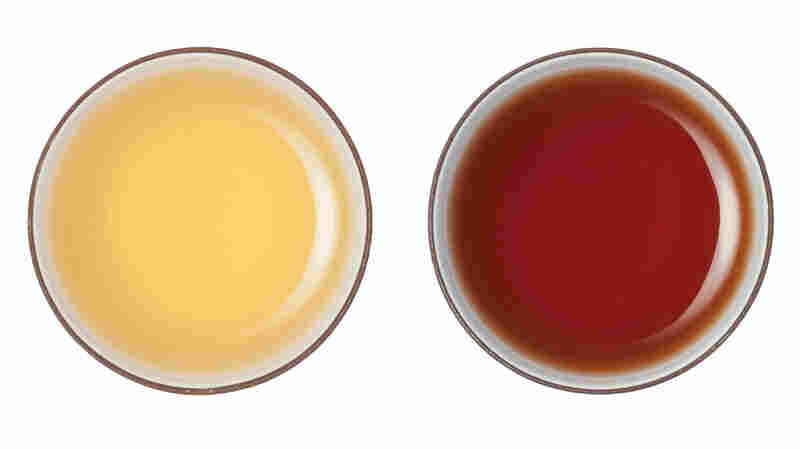 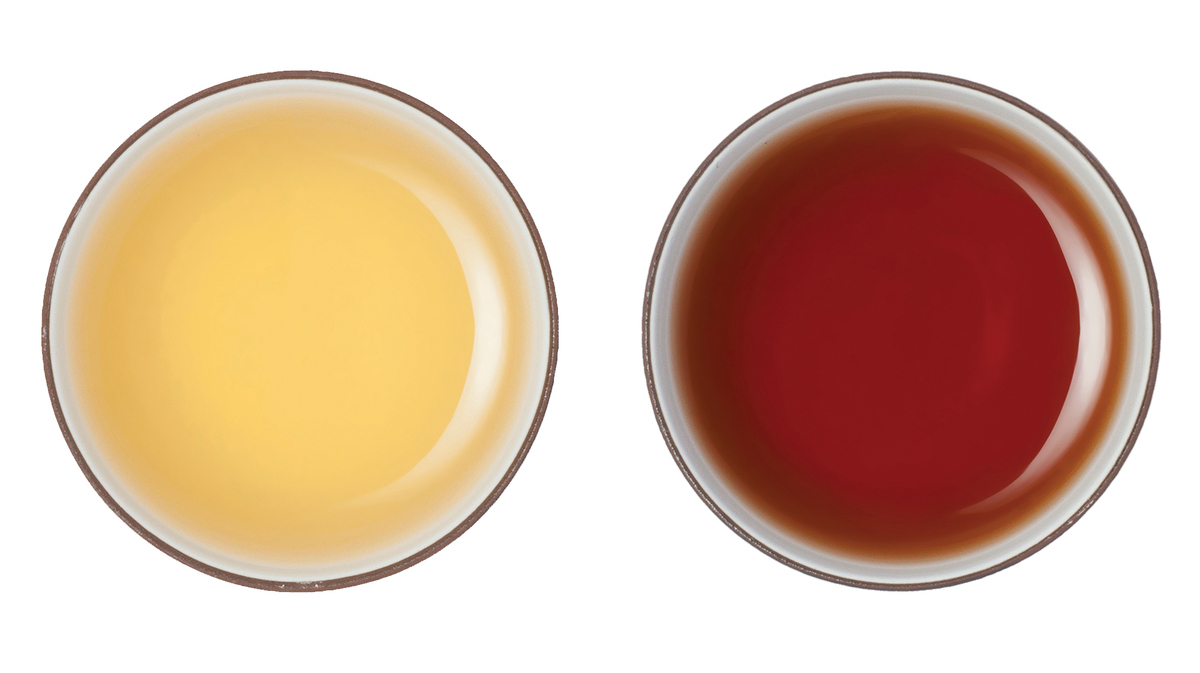 Traditional Sheng Pu'er (left), is allowed to naturally ferment and mature in flavor over time. The more recently invented Shu Pu'er (right) is piled into a moist mass and fermented far more quickly.

Though we most often see tea (camellia sinensis) in the shape of neat ornamental bushes with small leaves, these can grow into trees with large leaves if left alone, and the assamica variety that produces pu'er grows particularly large. And though we sometimes think of tea as fermented, in truth, black and oolong teas oxidize when they are exposed to air. Most teas, unlike pu'er, do not undergo fermentation with bacteria and yeasts.

That fermentation can produce a wide array of complex flavors – from the poorly processed and moldy (like Falkowitz's first taste) to a palate so desirable that some pu'er has commanded a higher price per gram than silver. At its best, Falkowitz says, pu'er provides a kind of "bodily revelation, with a finish that lasts for hours."

Pu'er is a "slow" beverage, intended to be sipped, aged and savored like fine wine. And, much like a fine wine or a Dom Perignon, pu'er has established brands, labels and revered productions that can reach iconic status.

"The Menghai Tea Factory, Xiaguan, Changtai, Chen Yuan Hao, Yang Qing Hao," says Falkowitz, "these are all names people in pu'er know as brands like Dom Perignon, Moet, Veuve, and the like in Champagne." 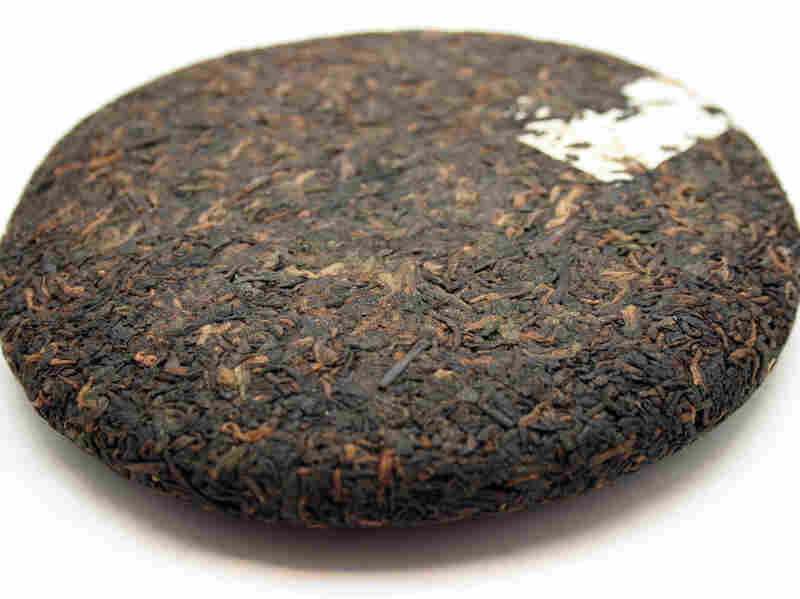 Pu'er is routinely compressed into cakes, called bings, and wrapped in paper printed with the name of the tea. Courtesy of Tony Gebely hide caption 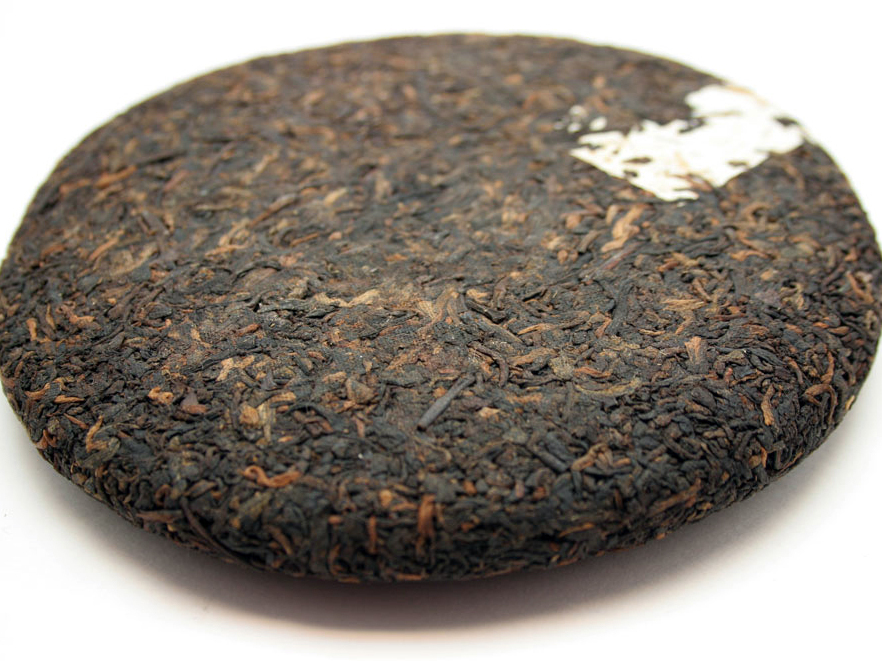 Pu'er is routinely compressed into cakes, called bings, and wrapped in paper printed with the name of the tea.

Pu'er has vintages, as well. The 88 Qingbing is a portion of a production run of Menghai Factory pu'er that was produced between 1988 and 1992, and aged in dry storage by a specialist named Vesper Chan. "It's a pu'er with near totemic status," says Falkowitz. "Everyone can point to it and say, there it is, that's this remarkable thing."

To be considered true pu'er, the leaves must be grown in Yunnan Province, dried in the sun, come from the plant Camellia sinensis var. assamica, and allowed to ferment over weeks, months, years or even decades. Pu'er's essence apparently embodies the idealized Shangri-La that is remote Yunnan, with its rich variety of landscapes (from jungles to snow-capped mountains) and people (more than half of China's ethnic minorities live here). In fact, pu'er is named after a Yunnan town that was a center for trade in the early 17th century, and it's also one of the few teas that the Chinese government has designated as a protected-origin product.

But pu'er is more than a beverage — it's a distillation of a certain aspect of Chinese culture, according to Jinghong Zhang, a lecturer at Yunnan University and author of Pu'er Tea: Ancient Caravans and Urban Chic. The Chinese were the first people in the world to domesticate tea-producing Camellia sinensis plants and begin producing, drinking and trading tea.

Serving tea is an act of hospitality; tea is given as a betrothal gift during wedding negotiations, and offered to ancestors during religious rituals. Chinese essays and poems often associate tea with frugality, benevolence and moderation. Zhang notes that some indigenous peoples in Yunnan worship tea trees and will not let them be cut down.

"With tea," one 60-year-old Chinese man told Zhang, "everyone becomes elegant and refined in manner." And as an oft-repeated Chinese proverb suggests, pu'er is considered the apex of that refinement: "Pu'er tea won't be good until it has been aged for a long time by means of a natural process ... just as a man won't be mature and wise until he has had enough life experience."

Pu'er prices vary greatly depending on where the leaves were grown. Forest tea is more prized than terrace tea. Some pu'er can be had for just a few dollars a kilogram, while a few of the more prized producing villages, such as Lao Banzhang, sell maocha (the raw material used to make pu'er) for around $725 per kilogram, according to Tony Gebely, author of Tea: A User's Guide. And in 2005, a mere 500 grams of a 64-year old "vintage" sold for over a million Chinese yuan (nearly $150,000). "Chinese plutocrats collect it," explains Gebely, with a laugh.

Not surprisingly, the astonishing cost, more than the price of silver, led to a boom-and-bust pu'er bubble, with a tenfold increase in price between 1999 and 2007 of pu'er forest tea (da shu cha), which is grown in Bulang and Hani in Yunnan, and is thought to taste better. The bubble popped in 2007, when widespread counterfeit pu'er was discovered, and prices then stabilized.

Another part of the allure of pu'er is its presentation: It is routinely compressed into cakes, called bings, and wrapped in paper printed with the name of the tea. A cake of pu'er continues to change as it ages, and bits of tea are broken or chipped off — often with a small knife — to brew.

This method was forged centuries ago for the long journey along the famous Teahorse Road, which ran across sweeping mountain vistas between China and Tibet and went all the way north into Siberia and south into Thailand. The cakes were stacked in piles of seven, and wrapped in bamboo, then strapped to either side of a mule or horse. Chinese brought tea to Tibet, and Tibet offered horses in exchange. Indeed, pu'er may have evolved by lucky happenstance, when tea being transported was exposed to heat, rain and sun, and began to ferment.

Those physical cakes can become "objects you can kind of fetishize, with fancy wrappers," Falkowitz maintains, unlike loose tea sold by weight. He compares peeling your cake of pu'er off its stack to "retrieving a rare wine from the cellar for a fancy dinner." Some aged and valuable pu'er tea cakes are seen as ideal specimens and have inspired connoisseurs to make a pilgrimage to their place of origin.

Pu'er is to be brewed for a very short time in boiling water (15 to 60 seconds), then re-infused again and again — as many as a few dozen brief brews, altering the flavor until the drinker arrives at the desired taste.

"It is amazing to experience the changes that happen as a cake of pu'er ages," says Scott Wilson, owner of Yunnan Sourcing: A Pu'er Tea Shop. Wilson lives in Austin but travels frequently to China to source his teas. "The pu'er I drink today will be different a year later," he says. "I've been living and breathing pu'er full time for 13 years now. I consider it a kind of curse, it's so all-consuming."

Wilson says the American taste for pu'er has blossomed since he first started selling cakes on eBay in 2004. "There was a huge wholesale market, with thousands of kinds of pu'er in China, but only a few Western tea vendors selling one or two cakes online. I would sell cakes for 10 or 20 bucks." Today, says Wilson, a tea that would have sold for $10 when he started will sell for $200.

And the West now boasts pu'er connoisseurs who can not only differentiate between forest tea (taken from tall, old tea trees) and terrace tea (from tea bushes arranged in rows, a style that arose in the late 1970s), but who may prefer one hamlet over another. Says Wilson: "If one field gets more sunlight than another, the tea will taste different, and people today know that."

For the average tea-drinker buying a less expensive but aged pu'er, expect the palate to be "dark, with fruity and leathery notes," says Falkowitz. "Really old tea can taste like dried fruit and Chinese medicine, and is sometimes earthy like mushrooms."

The most recent pu'er that Falkowitz tasted was, he says, the most remarkable of all. In a January feature for Saveur, he describes being invited by a Western pu'er devotee and purveyor to trek to a "magical mountain grove" in Yunnan Province. Just three Americans have previously been to this grove, which is renowned for its rare pu'er, Falkowitz says.

"It's primordial there, like stepping into Eden," he told NPR. He sipped the coveted Lao Banzhang, a variety usually bought up by wealthy Chinese before it can be exported. "It was a shock to my system, far more potent than most tea. Everything was sunlight and ecstasy and I was sweating profusely."

Falkowitz has a cake of that rare pu'er in his apartment in New York City now, he says, but is waiting for it to age more before trying it again. "Pu'er offers a narrative and emotional thread over the course of time and brewing the leaf again and again. You're not just drinking tea; you're participating in a story."