Accessibility links
In Michigan, The Pasty Isn't X-Rated. It's A Portable Pie With History Baked In : The Salt The lightly seasoned meat and veggie pie, prevalent in the Upper Peninsula, is pure fuel. Popularized by Cornish miners in the 1800s, it's come to symbolize tenacity in the face of trying conditions.

In Michigan, The Pasty Isn't X-Rated. It's A Portable Pie With History Baked In

In Michigan, The Pasty Isn't X-Rated. It's A Portable Pie With History Baked In 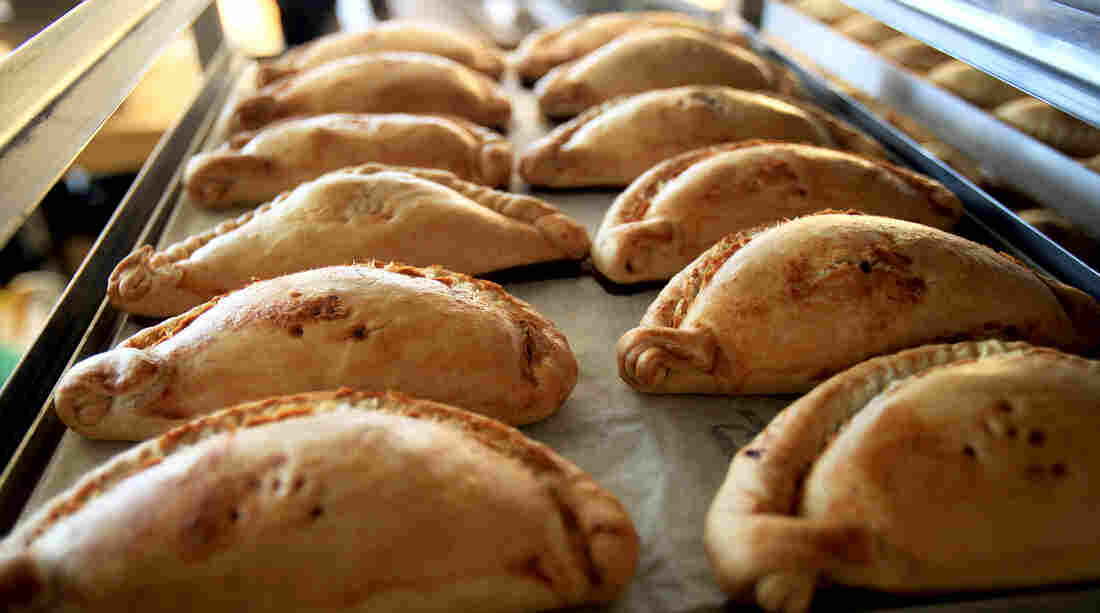 Miners favored the pasty due to its portable nature — a small meat pie that could easily be carried into the mines for 12-hour workdays. Matt Cardy/Getty Images hide caption 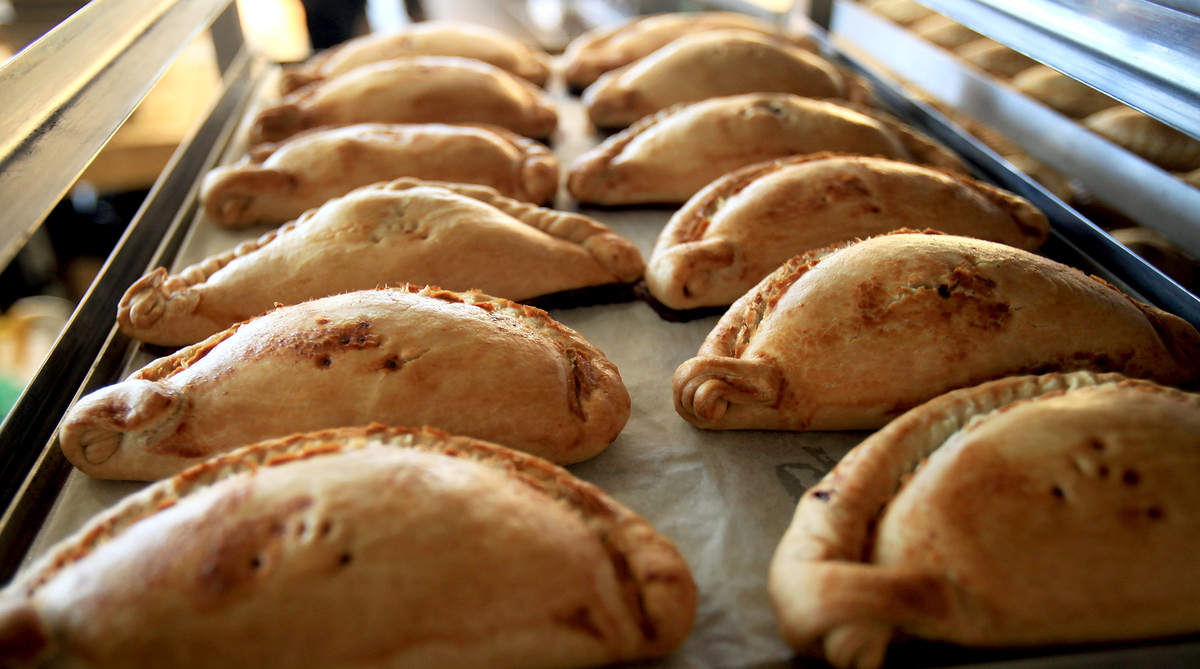 Miners favored the pasty due to its portable nature — a small meat pie that could easily be carried into the mines for 12-hour workdays.

When Stephen Bosio of Pasadena, Calif., fed his 9-month-old son a pasty, the act felt, by his assessment, more important than it should have.

"Teddy is a fifth generation pasty-eating man," Stephen told me.

Outside the rural Midwest, the term "pasty" is associated with a particular type of nipple cover rather than a pastry shell stuffed with ground beef and root vegetables, although the pronunciations of these terms differ. The food variety, ironically, rhymes with "nasty" rather than "tasty." In Michigan's Upper Peninsula (U.P.), where Stephen and I grew up, the dish is as culturally ubiquitous as deep-dish pizza is to Chicago. It did not strike me as absurd that a baby eating a pasty would mark a milestone on par with a first step or first word.

Michigan's Upper Peninsula is a landmass jutting out of the northern tip of Wisconsin. The pasty's prevalence is linked to an early 1800s rush to mine copper deposits in the region. The resulting onslaught of laborers from Cornwall, England, brought over the pasty.

The Cornish miners favored the dish due to its portable nature — a small meat pie that could easily be carried into the mines for 12-hour workdays. In 1864, an even bigger wave of Finnish immigrants flooded the area. Folklorists William and Yvonne Lockwood noted that Finnish immigrants took cues from the Cornish population on how to behave American and adopted the pasty as their own. Different ethnic groups would make their own version of the dish and the Finnish were known for sometimes substituting carrots for rutabaga. The pasty became so popular with the Finnish miners, there remains a prevalent misconception that the dish is Finnish in origin.

The pasty certainly feels Finnish. It embodies the Finnish term Sisu, ill-defined in the English language. Sisu is a Nordic stoicism, tenacity without self-aggrandizing romanticisms. I define Sisu via a pre-Simpsons Matt Groening cartoon, his era of anthropomorphized rabbits. In one comic, a rabbit runs the gamut of life-to-death highlights – birth, death, marriage, divorce – while a voice assures him, "You'll never make it. Quit squirming." 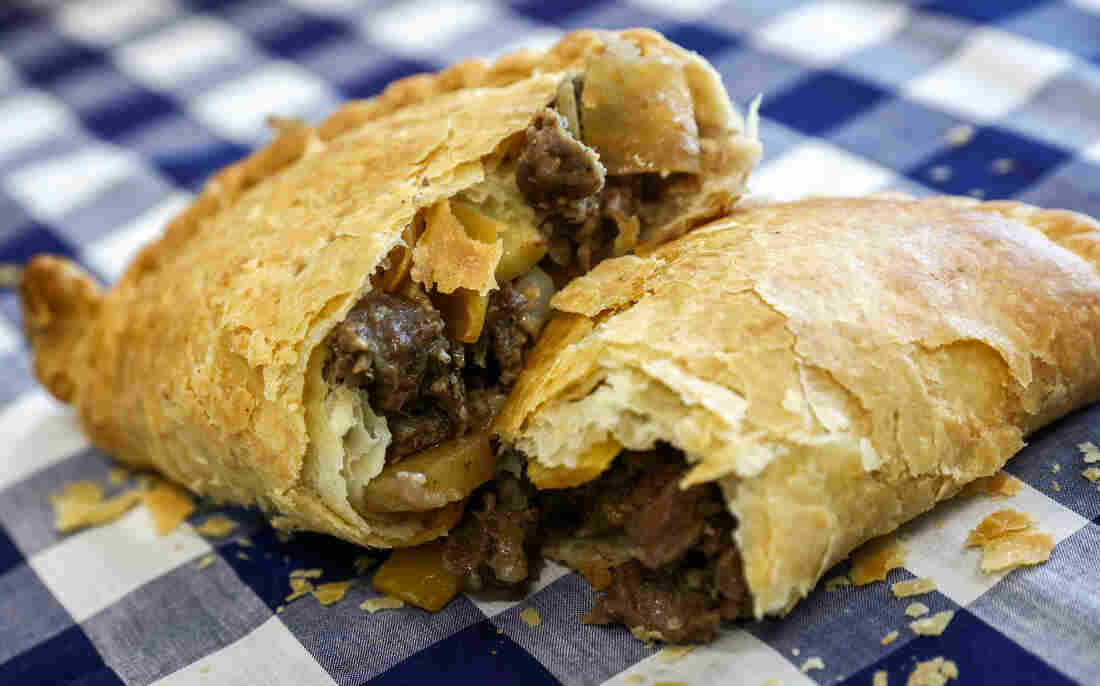 The pasty's seasonings are consistently simple. They are always seasoned with only salt and pepper and served with ketchup or gravy. Simon Dawson/Bloomberg/Getty Images hide caption 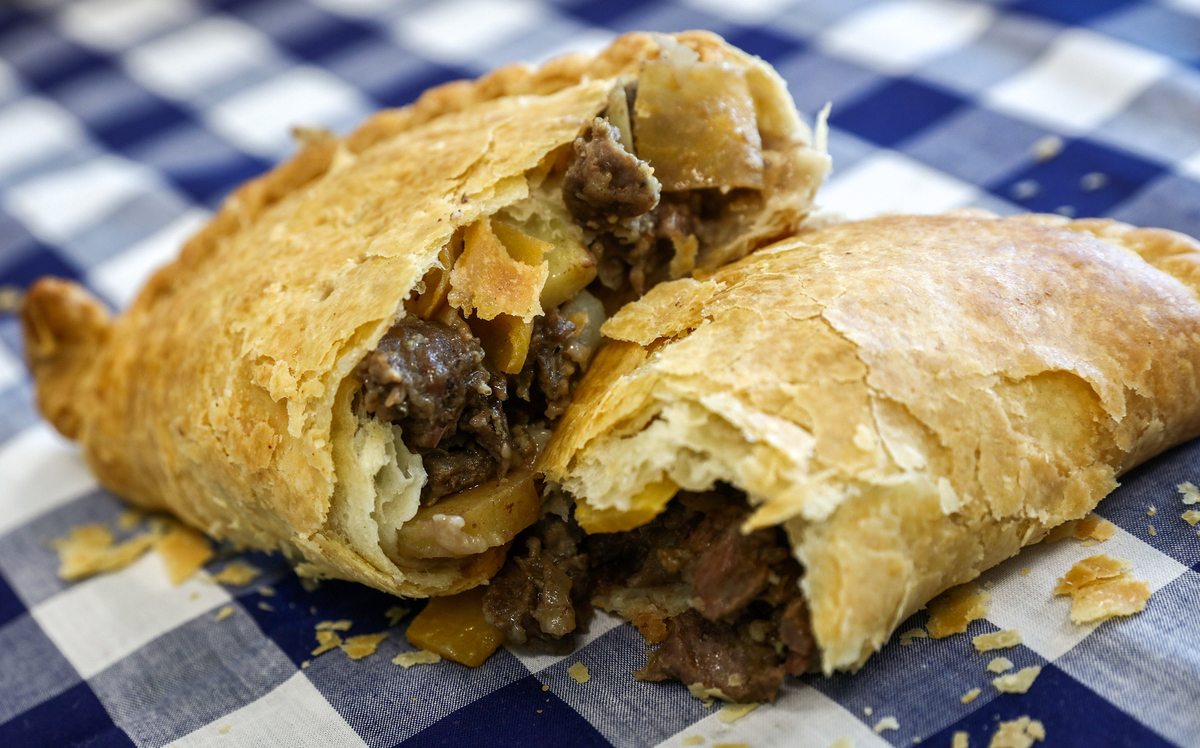 The pasty's seasonings are consistently simple. They are always seasoned with only salt and pepper and served with ketchup or gravy.

The pasty is a dish born in the name of raw self-preservation. Pasties are rarely seasoned with anything other than salt and pepper, but tantalizing the taste buds is not the point. The dish's strength lays in its practicality. A mix of complex carbs and protein, the pasty values sustainability over gastronomic gratification.

Pasty making takes grit. David Livermore, a former line cook who worked in U.P. pasty restaurants in the late '90s, can attest to that. Livermore worked in two different restaurants near the Mackinac Bridge connecting the Upper and Lower peninsulas. The pasties Livermore made contained ground beef, carrots, rutabaga and diced potatoes. These ingredients needed to be sliced into precise portions to ensure everything would cook to the same texture, a process that took a full morning. Despite the prep work's complexity, the pasty's seasonings are consistently simple. They are always seasoned with salt and pepper only and served with ketchup or gravy. (The ketchup-versus-gravy debate remains a point of contention. Livermore comes from a gravy family. I come from a ketchup one.) The dish retains its working-class roots. Livermore's father runs a logging business, where the pasty is a favorite with Upper Peninsula loggers.

"When I heard about a Pasadena pasty, I worried it would include avocado," I said.

"I think, with pasties, the flavors come together great, but nothing is super overpowering," Livermore says, "There's no Cajun, there's no paprika, there's no huge flavor burst ... You take a bite, and it's filling. That's what Michigan is for me." 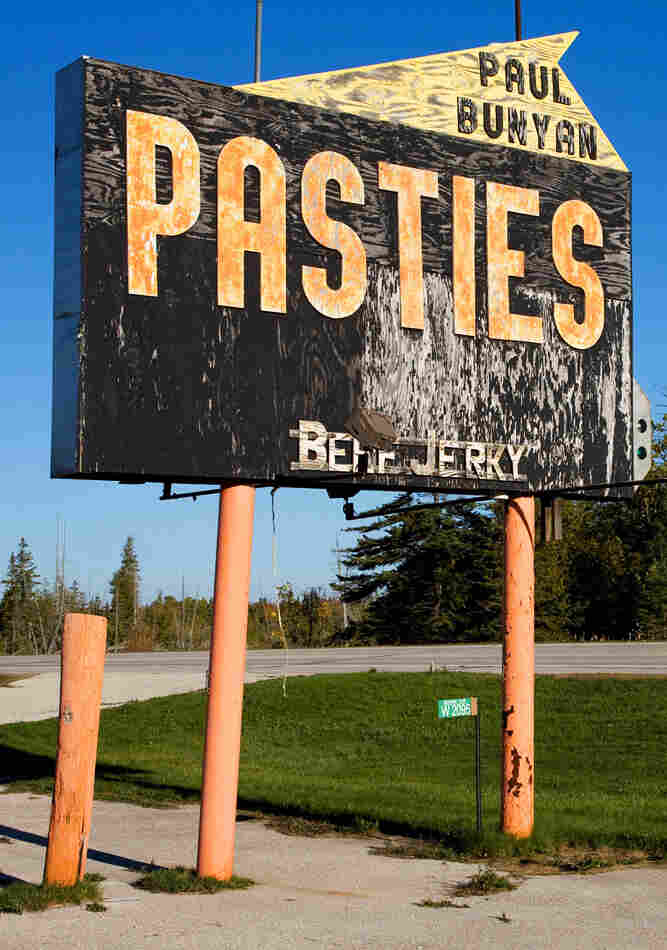 The pasty is often unknown to downstate tourists. But in the Upper Peninsula, there are signs everywhere advertising the dish. James Marvin Phelps/Flickr hide caption 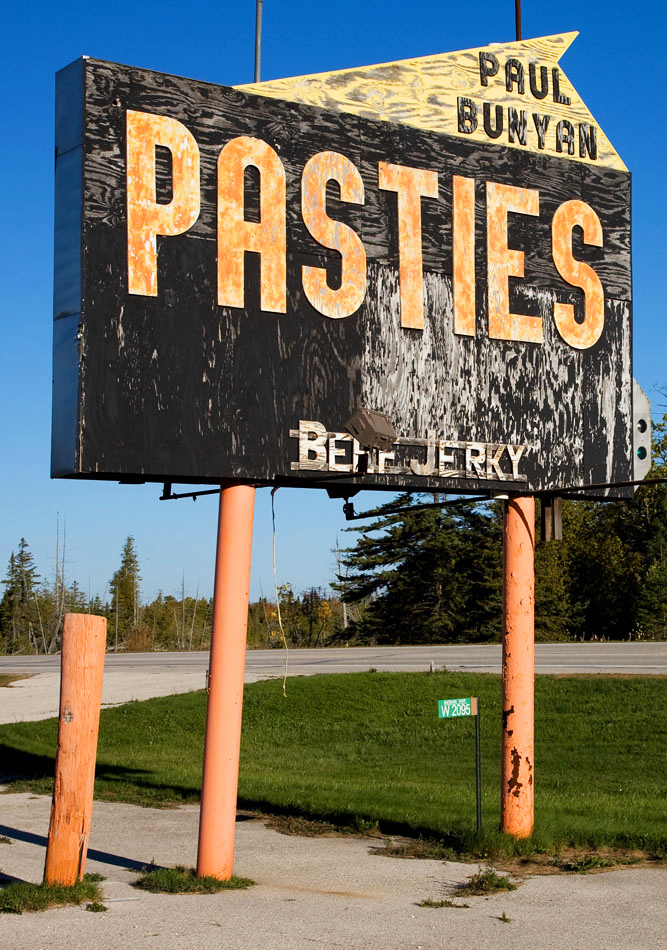 The pasty is often unknown to downstate tourists. But in the Upper Peninsula, there are signs everywhere advertising the dish.

There is a slight difference between Michigan as a whole and Upper Michigan. The pasty is often unknown to downstate tourists. As soon as you cross the Mackinac Bridge, you are bombarded with restaurants sporting signs reading "Pasties Sold Here." This gets confusing.

"Tourists assumed it was pronounced 'paste-y,'" Livermore says. "They would come in wondering what exactly we were selling."

Tourists were eager to try the dish, enticed by the smell and fascinated by the food's link to the mines.

"It was like tasting a bit of history," Livermore says.

It was actually history that compelled Stephen to share the dish with his California-raised children. He wants his kids to learn the tradition; his great-grandfather was a Finnish immigrant who worked in the copper mines.

"No way!" I said, "My grandpa sued them a whole bunch over workers' rights issues."

This was no surprise to Stephen, whose great-grandfather survived a cave-in. The event was one factor that led to a 1913 miners' strike. The strike culminated in the infamous Italian Hall Disaster, which Stephen's great-grandfather witnessed. On Christmas Eve, the mining union held a party in a building known as the Italian Hall. Someone falsely shouted "Fire," leading partygoers to stampede to the door. The resulting pile-up caused 73 deaths. They never apprehended the culprit, but eight witnesses swore the man wore an anti-union button on his coat. After the strike's end, Stephen's great-grandfather was blacklisted from the mines. Unperturbed by the setbacks, he built a house and began farming.

"He is Sisu," Stephen said.

I was not surprised that Stephen linked the pasty to a Finnish miner's tenacity. Sisu is encased in dish. The food is pure fuel, which fed miners and then loggers, and encourages squirming in the face of trying conditions. This mentality remains vital to Upper Peninsula culture.

Recent decreases in snowfall has caused tourism to plummet. Mines continue to close. The region's economic future is uncertain, but there is a glimmer of hope. There is talk of a limestone mine opening in the eastern Upper Peninsula. The pasty may once again descend underground to be served in the name of perseverance over pleasure.