Accessibility links
How To Make Farmers Love Cover Crops? Pay Them : The Salt New satellite images reveal that few Midwestern farmers are planting pollution-preventing "cover crops." In Maryland, though, farmers are doing it, thanks to hefty subsidies.

How To Make Farmers Love Cover Crops? Pay Them

How To Make Farmers Love Cover Crops? Pay Them 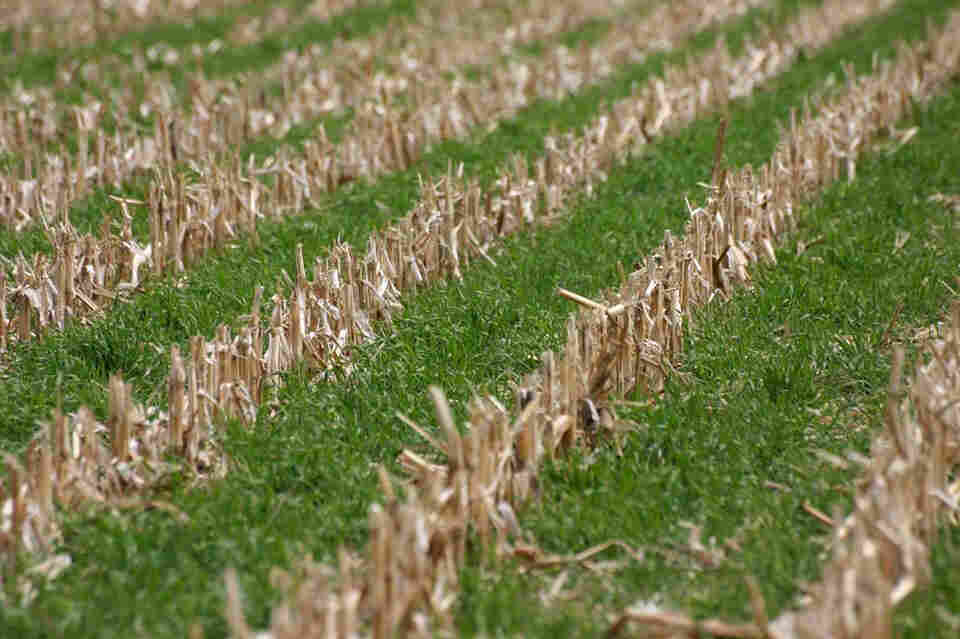 Green shoots of cereal rye, a popular cover crop, emerge in a field where corn was recently harvested in Iowa. The grass will go dormant in winter, then resume growing in the spring. Less than three percent of corn fields in the state have cover crops. Courtesy of Practical Farmers of Iowa hide caption 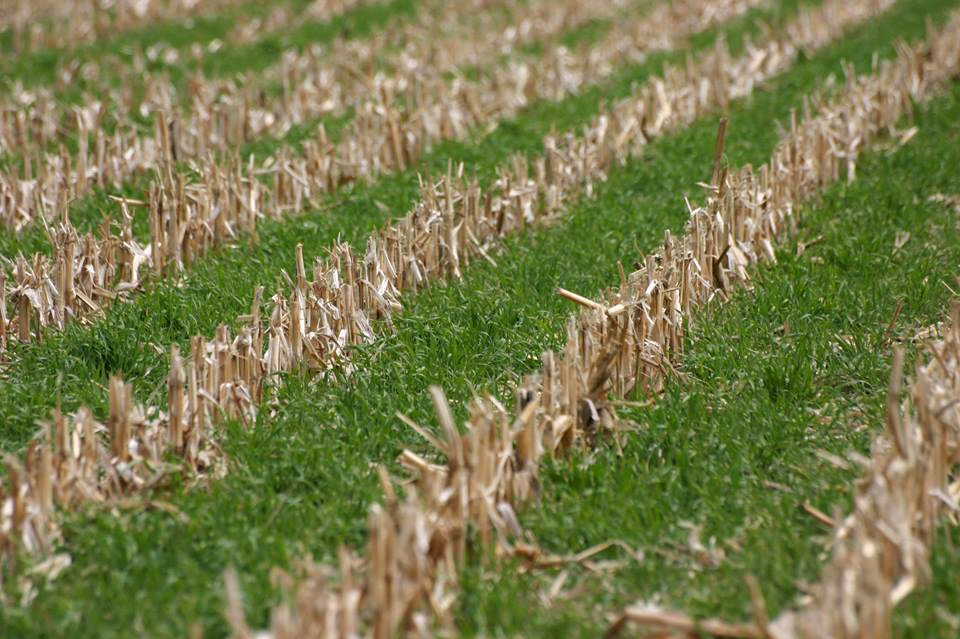 Green shoots of cereal rye, a popular cover crop, emerge in a field where corn was recently harvested in Iowa. The grass will go dormant in winter, then resume growing in the spring. Less than three percent of corn fields in the state have cover crops.

Courtesy of Practical Farmers of Iowa

Environmentalists love "cover crops." These are plants that tolerate cool weather and grow on farm fields after the crops are harvested. They hold the soil in place and are probably the most effective way to keep nutrients in fields, rather than polluting nearby streams.

Unfortunately, the average farmer doesn't love these crops quite so much. The Environmental Working Group, a research and advocacy organization, studied satellite images of the Midwest and found that farmers in Iowa and Illinois had planted cover crops on less than three percent of their corn and soybean fields. Indiana's farmers did slightly better, with cover crops on about seven percent of cropland.

That's tiny, compared to what's needed to dramatically reduce water pollution from farms. Soren Rundquist, one of the authors of the EWG report, tells The Salt that Iowa's environmental planners want cover crops on at least 60 percent of the state's corn and soybean acres. Illinois has set a similar goal. The number of acres with cover crops in both states is increasing, Rundquist says, but at current rates these states won't meet their goals for decades to come.

There is, however, a proven way to get farmers to cover their fields. Pay them a lot of money for it. It's worked well in one state — Maryland.

In a part of the state known as the Eastern Shore, a heavily agricultural area along the Chesapeake Bay, farmers now plant cover crops on well over 50 percent of all corn fields, says Ken Staver, a scientist at the University of Maryland's Wye Research and Education Center.

"The whole system is structured to get maximum impact," says Staver. The state of Maryland pays farmers for a whole range of practices — like cover crops — that cut nitrogen and phosphorus runoff into streams. The more effective the practice in cutting pollution, the more money the farmers get. The biggest payments — up to $90 per acre — go to farmers who plant a cover crop of rye on corn fields early in the fall, and avoid spreading manure as fertilizer on their fields until spring arrives. (Spreading manure in the fall is more convenient for farmers, but it's also more likely to wash away over the winter.) 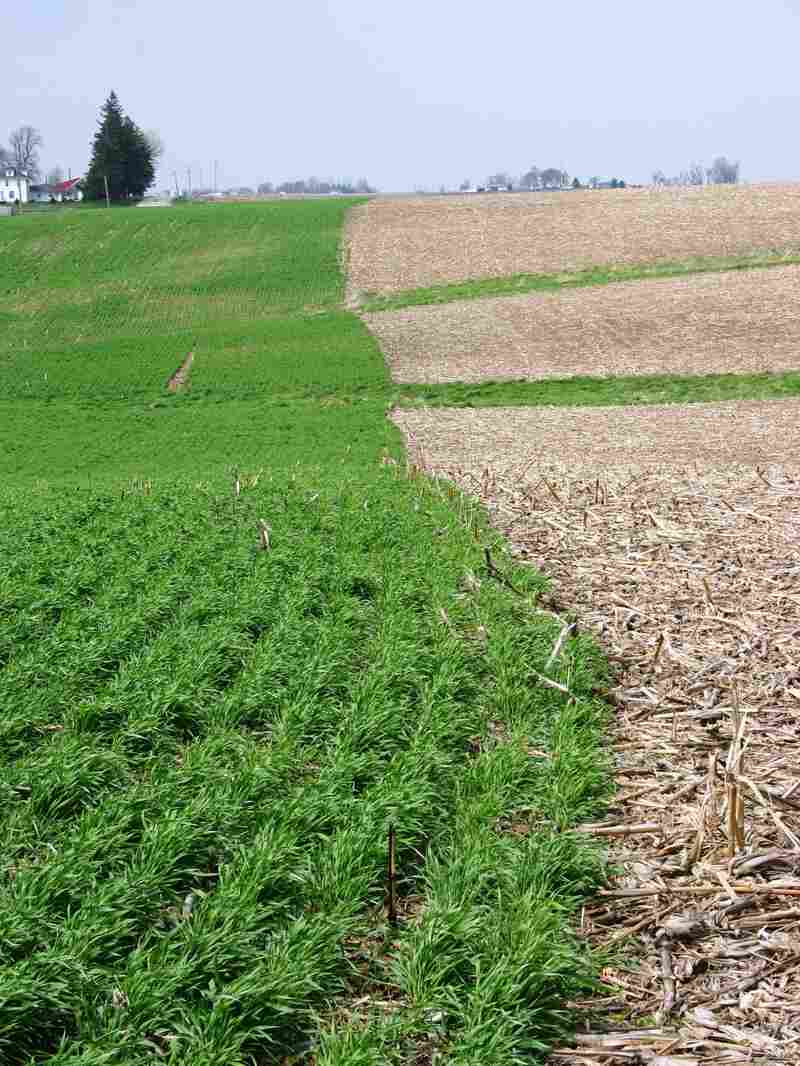 A growing cover crop (left) captures soil nutrients that otherwise might wash away from a field with no vegetation. Courtesy of Practical Farmers of Iowa hide caption 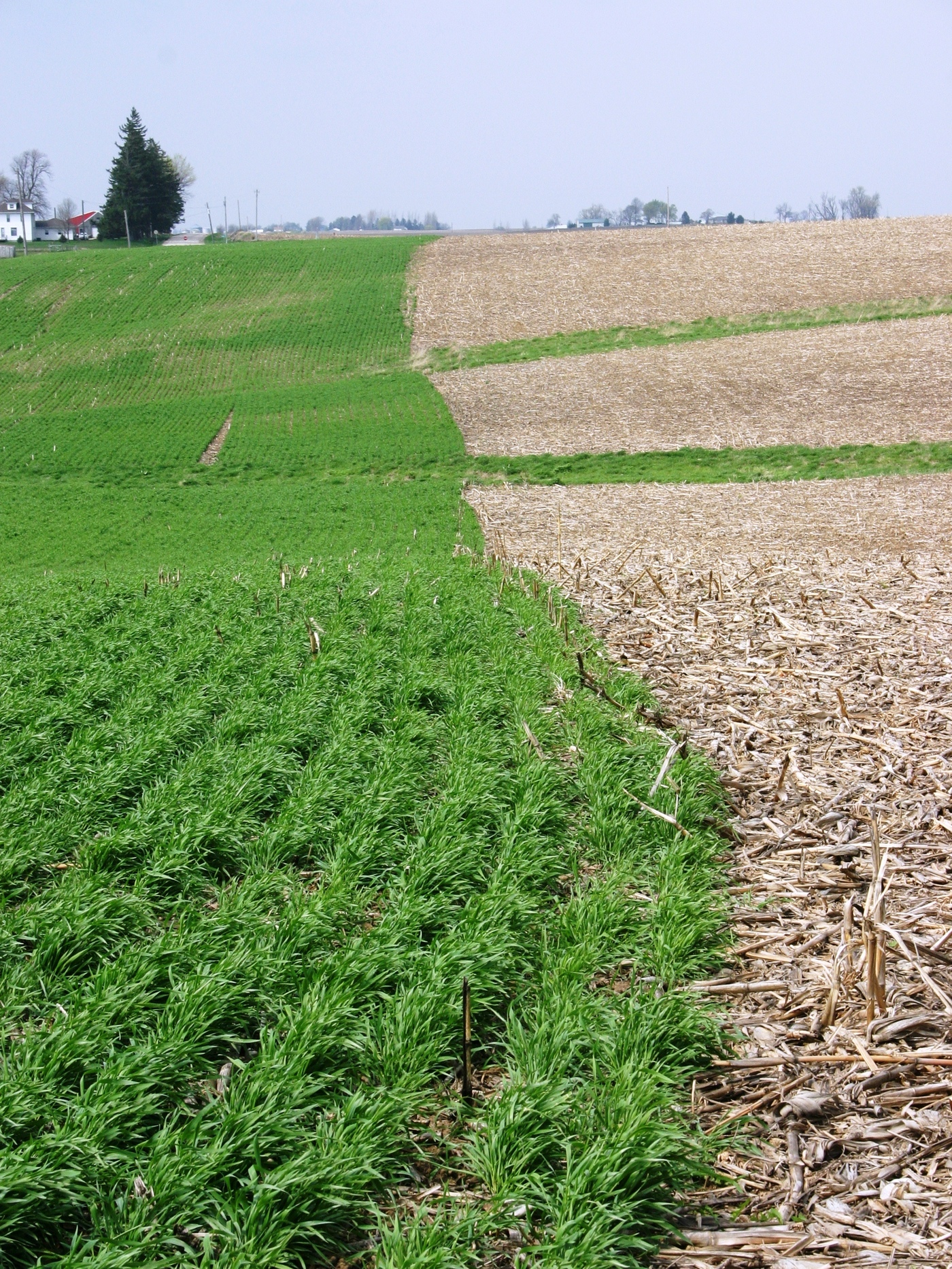 A growing cover crop (left) captures soil nutrients that otherwise might wash away from a field with no vegetation.

Courtesy of Practical Farmers of Iowa

Some advocates of cover crops don't think that farmers really need such payments, because a cover crop can pay for itself. It keeps soil healthy and keeps valuable nutrients in the field, so farmers don't need to spend as much money on fertilizer.

In practice, Staver says, those arguments haven't changed farmers' behavior. "We've been at this a really long time," he says. "We tried that, 20 years ago, and it just wasn't happening."

Farmers can be reluctant to plant cover crops because it means extra work, especially at crucial times in the fall and spring. Last year, some farmers in Indiana reportedly had trouble killing off their thriving cover crops when it was time to plant corn in those fields.

When Maryland offered farmers about $20 per acre to plant cover crops, some farmers signed up, but not enough of them. It took more generous payments to convince the majority of farmers to get on board.

Staver admits that this may be more feasible for Maryland than for Iowa, because Maryland has a much smaller amount of crop land to protect, compared to its state budget.

But Rundquist, from the EWG, says there's another way to look at it. Currently, he says, farmers in Iowa get about $10 million each year as incentives to plant cover crops. That's dwarfed by other federal subsidies that farmers receive; farmers in Iowa got over $1 billion from the federal government in 2015 in the form of subsidies for crop insurance and as compensation for low prices or poor yields.

Rundquist wants the federal government to shift its priorities. "Is [spending more money to promote cover crops] too expensive, considering how much money we spend on agricultural subsidies?" he says.

An earlier version of this story stated that Ken Staver believes that cover crops pay for themselves. Some proponents of cover crops believe this, but Staver does not think that there's convincing evidence for this, especially for cover crops that are most effective in preventing nutrient pollution.