Accessibility links
The Foxfire Book Series That Preserved Appalachian Foodways : The Salt Foxfire started as a class project at a Georgia high school in the '60s, but soon became a magazine, then a book, and even a way of teaching about the region's simple, self-sustaining way of life. 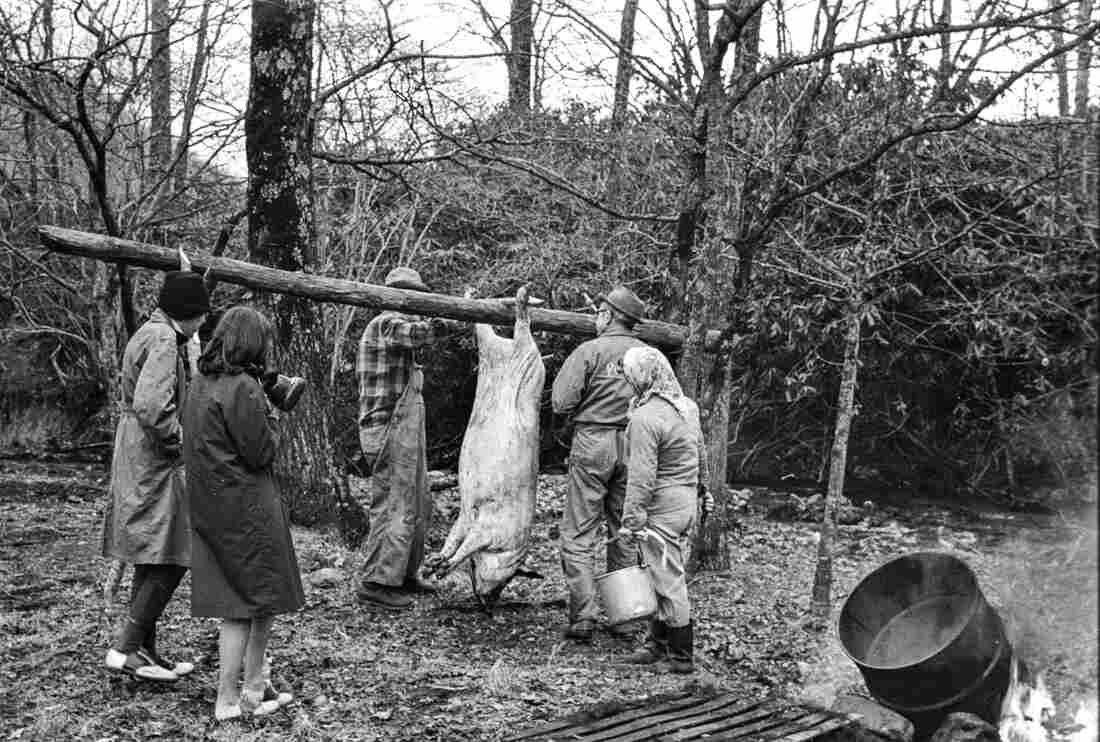 In an image from the first Foxfire book, students in 1969 look on as Hobe Beasley, John Hopper and Hopper's wife suspend a hog for finishing the work of scalding and scraping. Courtesy of The Foxfire Fund, Inc. hide caption 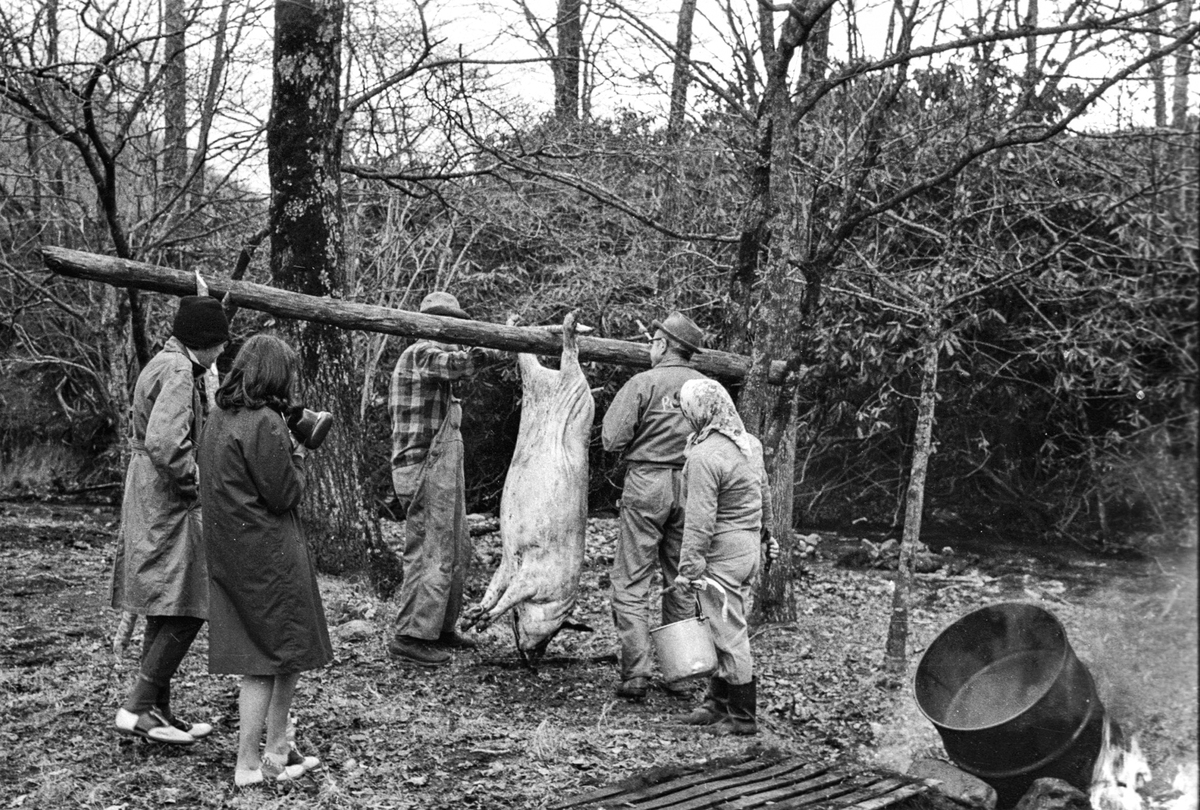 In an image from the first Foxfire book, students in 1969 look on as Hobe Beasley, John Hopper and Hopper's wife suspend a hog for finishing the work of scalding and scraping.

Courtesy of The Foxfire Fund, Inc.

The 1,500-mile Appalachian Mountain range stretches so far that those on the northern and southern sides can't agree on what to call it: Appa-LAY-chia or Appa-LATCH-ia. The outside perspective on the people who live there might be even more mangled. Stories about Appalachia tend to center around subjects like poverty, the opioid epidemic and coal, but since 1966 a series called Foxfire has been sharing food, culture and life as it's actually lived in the mountain region.

Foxfire started as a class project at a Georgia high school — students interviewed neighbors and wrote a series of articles, which turned into a quarterly magazine and then a book, in 1972, with other books to follow soon after. (The name of the series comes from a term for a local form of bioluminescence caused by fungi on decaying wood.) Within the first decade, more than 9 million copies of Foxfire were sold. Today, there are specialized Foxfire books that focus on cooking, winemaking, religion and music.

People who have been following the back-to-the-land food trends that have resurfaced in the past decade might find some of the recipes in Foxfire's Appalachian Cookery familiar and focused around a simple, self-sufficient way of life. There are instructions for making bread in a Dutch oven (specifically over coals in the fireplace.) For pork, the authors note that Appalachians "stand by their belief that virtually no part of the hog should be thrown away," and its recipes for homemade scrapple, hog's head, jowl or sausage wouldn't be out of place on a certain kind of Brooklyn menu.

When Susi Gott Séguret, author of Appalachian Appetite, saw Nordic cuisine becoming a trend, she thought, "What's the big deal? It's how I grew up and how Appalachian people have approached food from the beginning." The food is defined by the mountains. "There are certain restrictions and a richness born of that mountain setting," Séguret says. 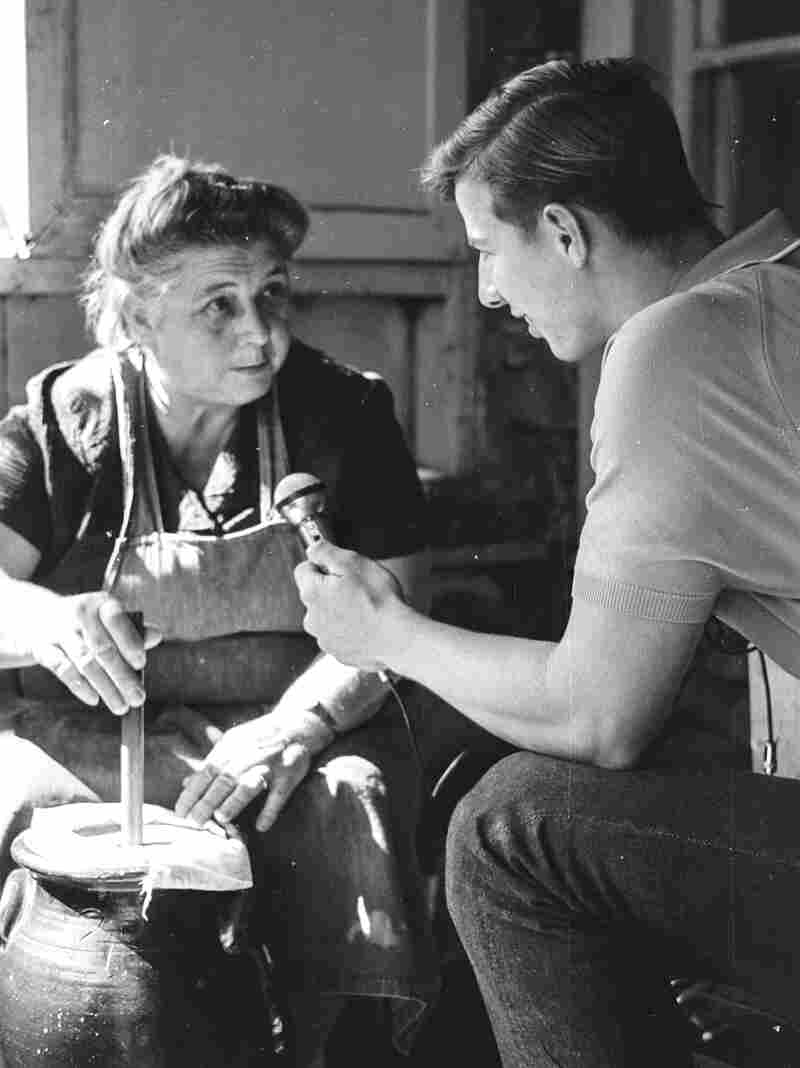 Margaret Norton, who is prominently featured in the first Foxfire book, churns butter as she is being interviewed by a student in 1967. Courtesy of The Foxfire Fund, Inc. hide caption 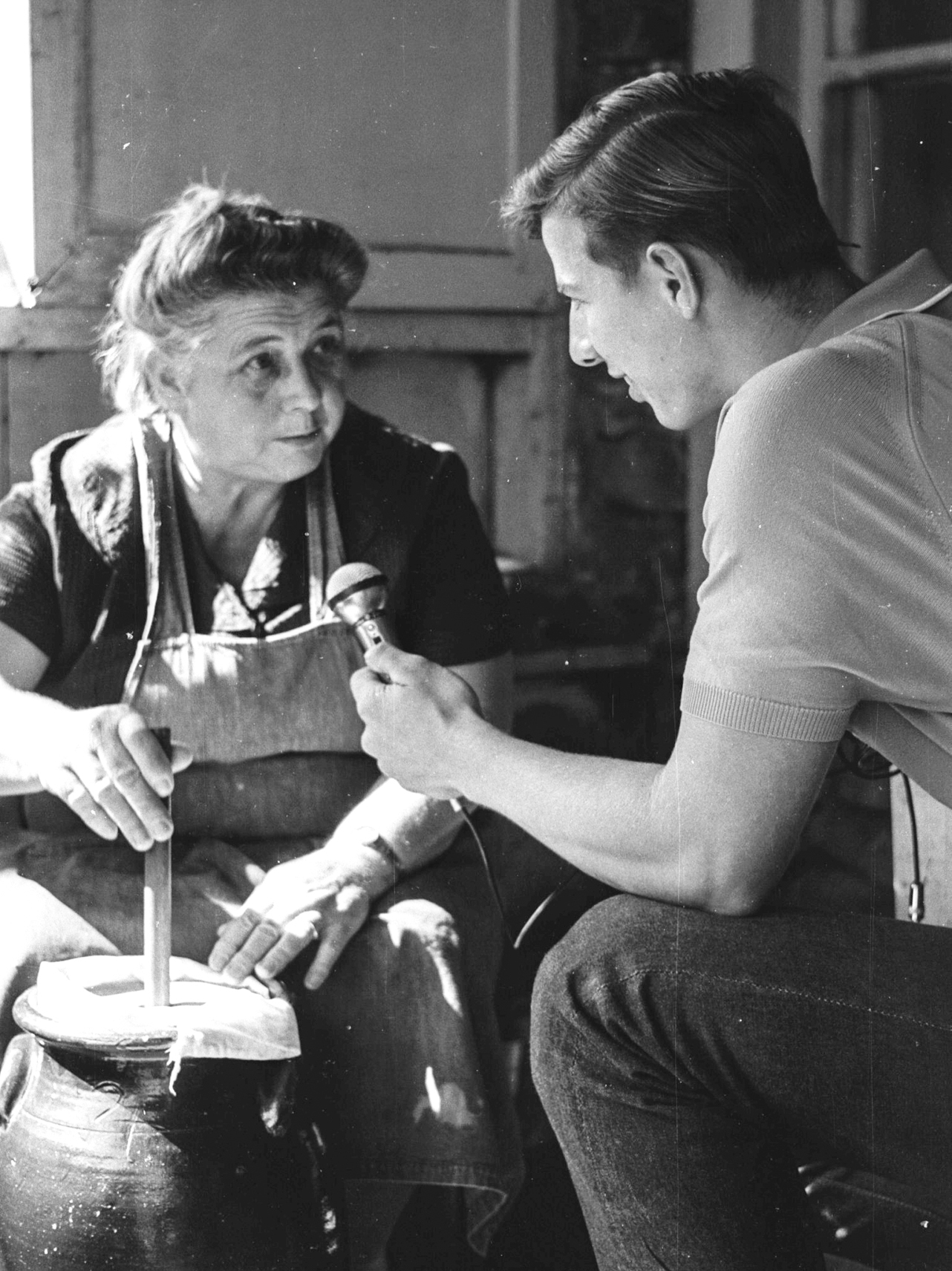 Margaret Norton, who is prominently featured in the first Foxfire book, churns butter as she is being interviewed by a student in 1967.

Courtesy of The Foxfire Fund, Inc.

Although foraging and using imperfect vegetables and local food are popular concepts today, they've been a way of life for generations in many cultures. Making charcuterie in-house has become a selling point for restaurants; Foxfire was one of the few books to describe how to make sausage from scratch. Yet the Appalachian culture described in Foxfire is still often pushed to the wayside in favor of chefs who have made the traditional seem new.

"One important part of the Foxfire books is the way they elevated women's work," explains Melissa Hall, managing director of the Southern Foodways Alliance. "Those first volumes are focused on home, and the unsung labor of women in creating those spaces and communities." What other series would publish Granny Gibson's suggestions on how to cook possum? (She advises boiling the possum until tender, then baking it with sliced sweet potatoes.) Or an interview with a woman named Ethel Corn who loves wild greens, and says that adding them into your diet can provide a corporeal "spring cleaning"? There are long recollections of the everyday act of cooking for large groups of people — whether dinner for a big family or special events.

Despite the series' esteemed reputation among its readers, there has been a lull in interest over the years. "I think right now the audience is mostly Southern," says TJ Smith, executive director of the Foxfire Fund, an educational center devoted to Appalachian culture which the books' proceeds helped create. Some of Foxfire's strongest advocates are survivalists who see it as an educational guide to topics as varied as building furniture or houses, harvesting crops, hunting and skinning animals, or cooking without electricity. 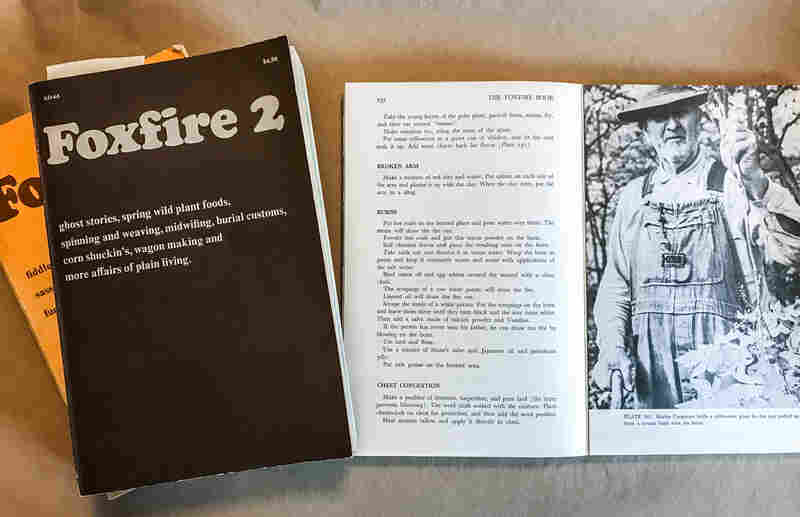 The original Foxfire book series consists of 12 volumes, but there are additional specialty books focusing on cooking, winemaking, religion and music. Courtesy of The Foxfire Fund, Inc. hide caption

One reason for the lull may be that Foxfire had to close ranks in order to survive a dark period of its history. In 1992, the teacher who started Foxfire pleaded guilty to child molestation. "There was no way it couldn't have affected things," Smith says. "I will say that some of the students who had been victims still supported the program because they believed in it and they built it."

The magazine project still continues in regional schools, and the Fund's board is made up of Foxfire alumni. "They put a lot of their heart into this place and the program," Smith says. During the time when the future of Foxfire was in question, a local campaign to save the series had people filling their windows with signs saying: "Foxfire still glows."

It's a testament to the importance of Foxfire that it could survive such a horrible twist to its founding story. Séguret, whose family connected many early Foxfire students with neighbors to interview, says she believes the books are beloved because they show that Appalachian history is worth recording: "Because the students were interviewing family, friends, neighbors and people who were unsung all this time, it served to knit the community together and validate who they were."

But even in a modern world where most things can be purchased pre-made, the skills outlined in Foxfire resonate with people who want to feel self-sufficient, linked to the past, and — of course — well fed.