Accessibility links
Amid Massive Tainted-Meat Scandal, Brazil Assures Safety Of Its Food Exports : The Salt The country's federal police say that health officials were bribed to ignore outdated and adulterated meat. The European Commission has suspended imports from companies implicated in the allegations. 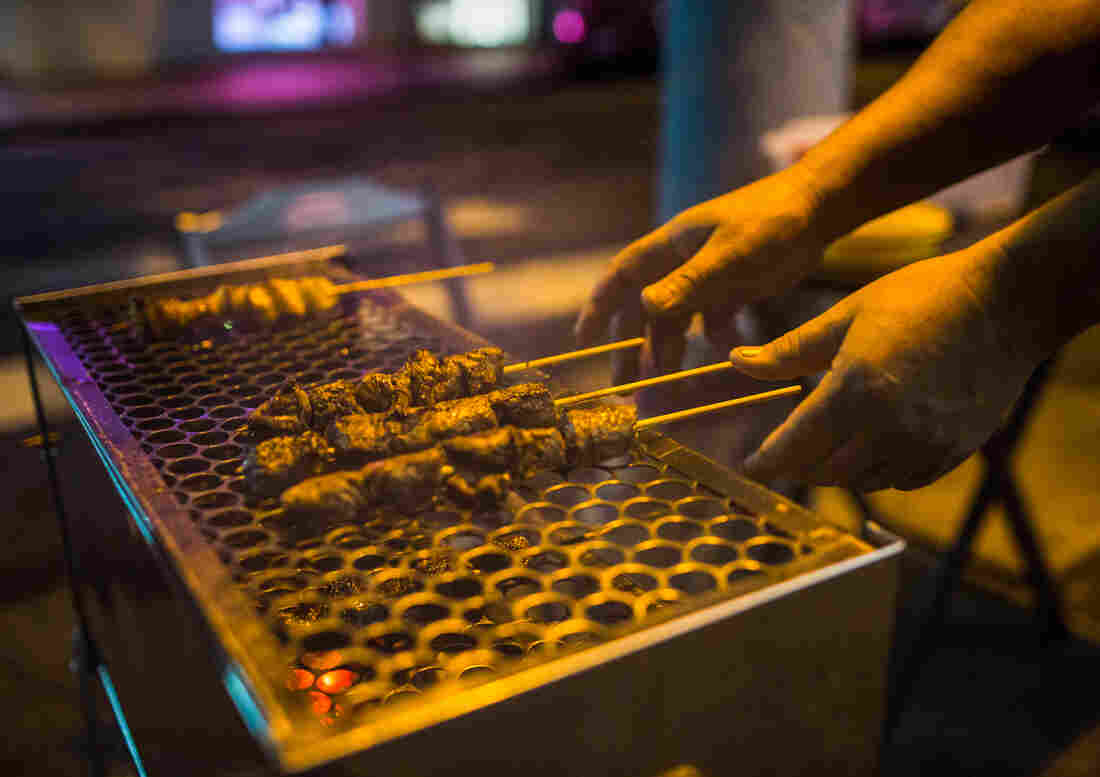 Brazilians are prolific meat-eaters, so they are struggling with allegations that health officials accepted bribes to allow subpar meat on the market. Victor Moriyama/Bloomberg/Getty Images hide caption 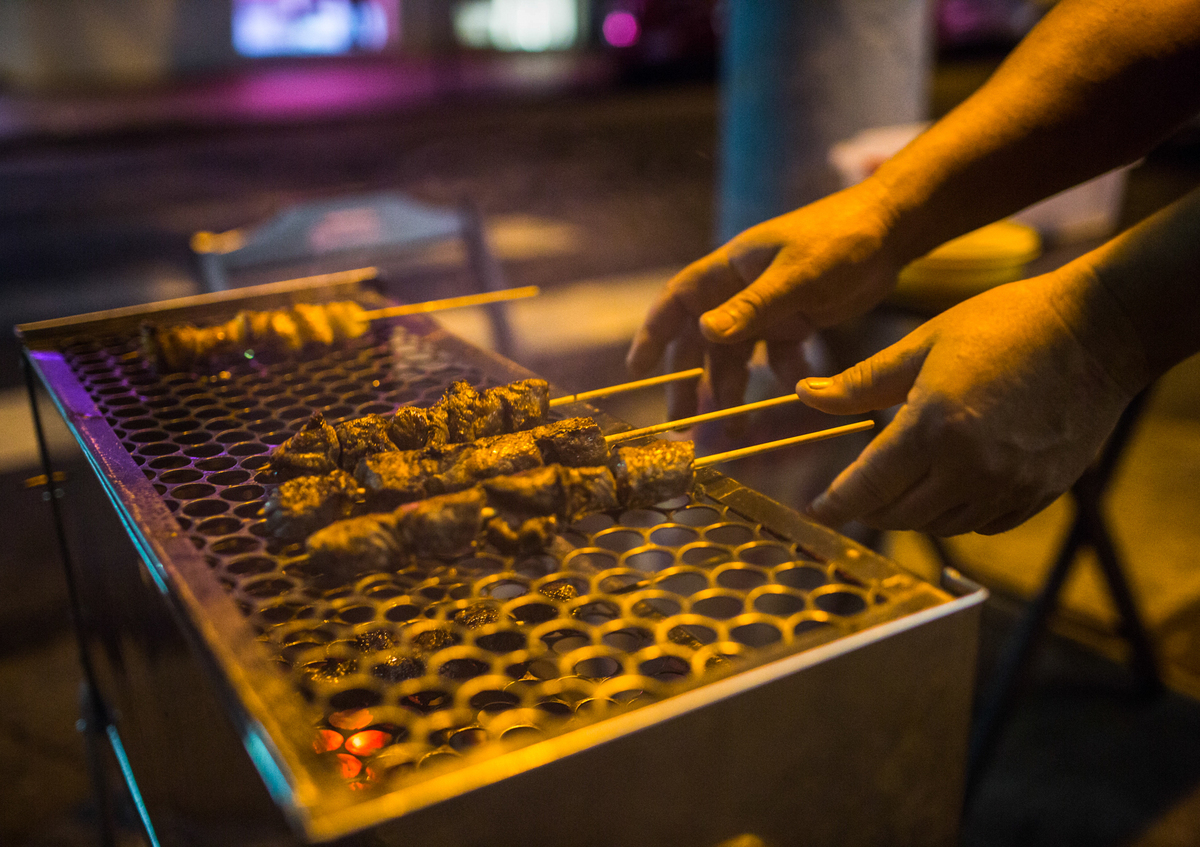 Brazilians are prolific meat-eaters, so they are struggling with allegations that health officials accepted bribes to allow subpar meat on the market.

Brazil has long been awash with corruption scandals, but the latest to erupt is about an issue that is particularly close to the nation's heart and stomach — and its wallet.

Few people are more prolific meat-eaters than the Brazilians, and few are more passionate about the merits of the barbecue, or churrasco.

They grill with gusto at almost any opportunity — on the beach, the sidewalk, at soccer games and even at protest rallies, where the whiff of sizzling sausage competes with the eye-watering stink of tear gas.

So it is easy to see why this country of 200 million is struggling to digest the news that its favorite food might not be quite as wonderful as everyone thought, and that rotten meat may have been finding its way onto the menu.

Brazil's federal police say they have unearthed evidence that the employees of some meat-processing companies bribed ministry inspectors to ignore outdated and adulterated produce.

The scandal has significant economic implications: Brazil is one of the world's biggest meat exporters, generating some $12 billion in annual export revenues and selling to around 150 countries.

The threat of damage to the international image of one of the nation's most important industries comes as Brazil is struggling to extract itself from the deepest recession on record.

Brazil's Recession The Longest And Deepest In Its History, New Figures Show

The allegations emerged after Brazil's federal police — who are the equivalent of the FBI in the U.S. — conducted a major search and seizure operation across six Brazilian states and the country's capital of Brasilia. The sting was the result of a two-year investigation triggered by a whistleblower, police said.

More than 1,100 officers carried out nearly 200 raids in an operation that the force labeled Carne Fraca — "The Flesh is Weak" — a Biblical reference aimed at the health officials who allegedly succumbed to temptation by accepting bribes which reportedly included prime cuts of beef.

Afterwards, police announced that they'd found 40 cases of suspected malpractice, including the use of chemicals to improve the smell of expired meat, and of flour and even cardboard to pad out sausages.

They also allege that meatpackers were able to hand pick their Ministry of Agriculture inspectors, who issued approval and export certificates regardless of adulteration. They claim that schoolchildren in one area — the southern state of Parana — were given food that included "outdated, rotten and many times cancerous products," and described the culprits as a "mighty criminal gang."

One of the companies accused of bribing officials is JBS SA, one of the world's largest meat processors. The company has responded with a volley of media advertisements, including full-page newspaper ads, stressing its high-quality standards and vehemently denying that any of its brands used adulterated produce.

A second major Brazilian company, BRF SA, confirmed the arrest of one executive, but also denied wrongdoing, saying that some of the police claims are false or are the result of misunderstandings. "BRF never sold rotten meat," the company said in a statement.

Brazil's government is racing to minimize the damage. President Michel Temer appeared in front of cameras on Sunday, tucking enthusiastically into a steak at a churrascaria — a BBQ restaurant — where he held a dinner to reassure ambassadors from countries that buy Brazilian meat. 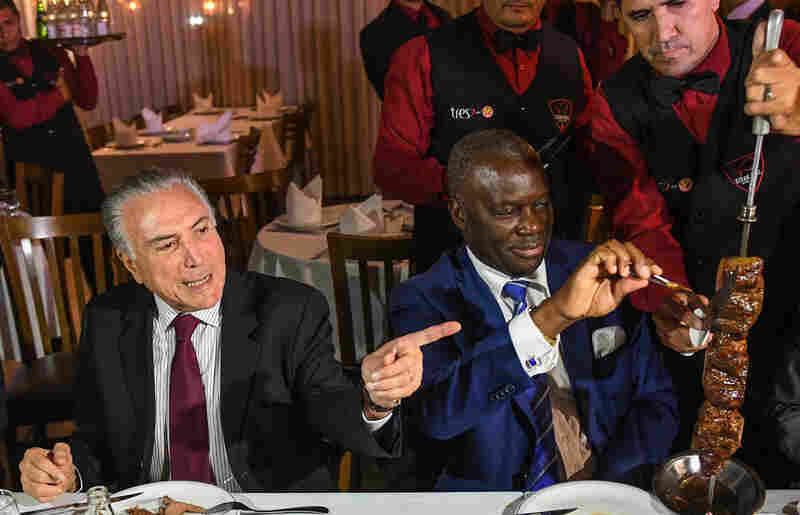 Brazil's President Michel Temer, left, held a dinner at a churrascaria in Brasilia to reassure ambassadors, such as Angola's Nelson Manuel Cosme, that the meat their countries are buying is of high quality. Evaristo Sa/AFP/Getty Images hide caption 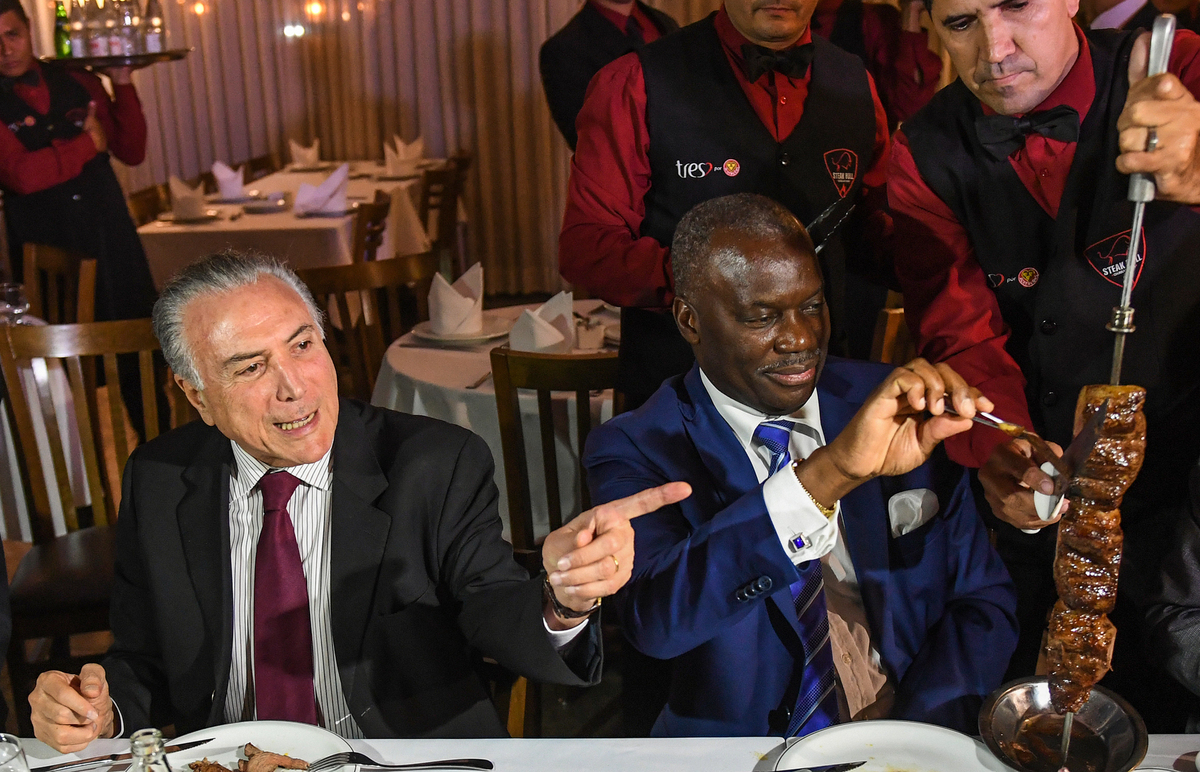 Brazil's President Michel Temer, left, held a dinner at a churrascaria in Brasilia to reassure ambassadors, such as Angola's Nelson Manuel Cosme, that the meat their countries are buying is of high quality.

However, a spokesman for the European Commission on Monday said it would ensure that "any of the establishments implicated in the fraud are suspended from exporting to the EU."

Brazil's Ministry of Agriculture has suspended 33 officials, but is portraying the affair as an isolated issue. It denies cardboard was mixed with food, and blames that allegation on a misinterpretation by police investigators of tape-recorded evidence.

"Brazilian meat is in 150 countries because it's good quality," said Eumar Novacki, a spokesman for the Ministry of Agriculture. "Those countries also have their agencies that inspect products."

The scandal appears to be prompting a mixture of anger and world-weary indignation among Brazilians.

"We feel pretty saddened because of the terrible crisis that the country is already going through," says Enos Souza, a civil servant. "People are buying stuff without knowing if they are being cheated. This is terrible."

"It's very likely people will be more careful about knowing the source of what they're buying, but even then it is pretty hard to know whether the quality of meat is good or not," he adds.

But public disgust is tinged with the bleak humor of a nation that's been battered for years by a daily drip-feed of news about vast corruption scandals involving dozens of top politicians, the national oil company, Petrobras, and a construction giant, Odebrecht.

One witty Internet posting is proving particularly popular: It shows a grill with barbecue skewers that are loaded not with tasty morsels of meat — but chunks of cardboard.