Accessibility links
For Afghan Immigrants, Nowruz Celebrations Of Spring Are A Taste Of Home : The Salt Celebrating this ancient festival was banned under the Taliban. For refugees and immigrants in America, the holiday and the feasts that accompany it are an important cultural link to Afghanistan.

For Afghan Immigrants, Nowruz Celebrations Of Spring Are A Taste Of Home

For Afghan Immigrants, Nowruz Celebrations Of Spring Are A Taste Of Home 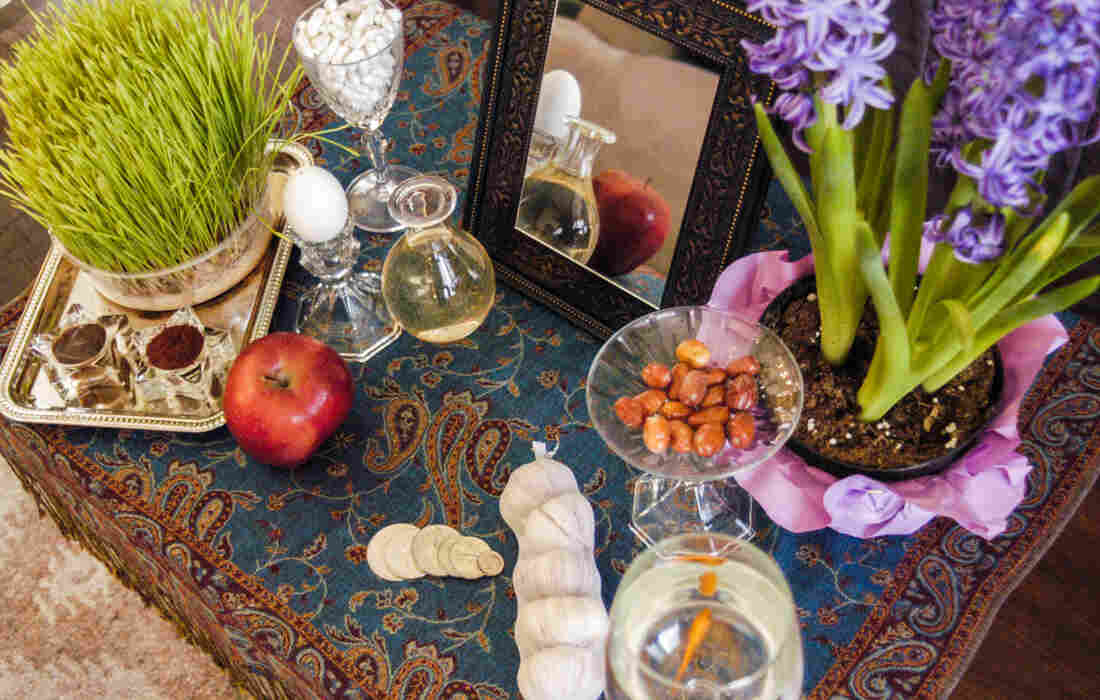 Nowruz, the Persian New Year, is a celebration of the start of spring marked through large parts of the Middle East and Central Asia. Above, a Nowruz haftseen table, laden with seven items meant to symbolize rebirth or renewal. creativeelixir/Getty Images/iStockphoto hide caption 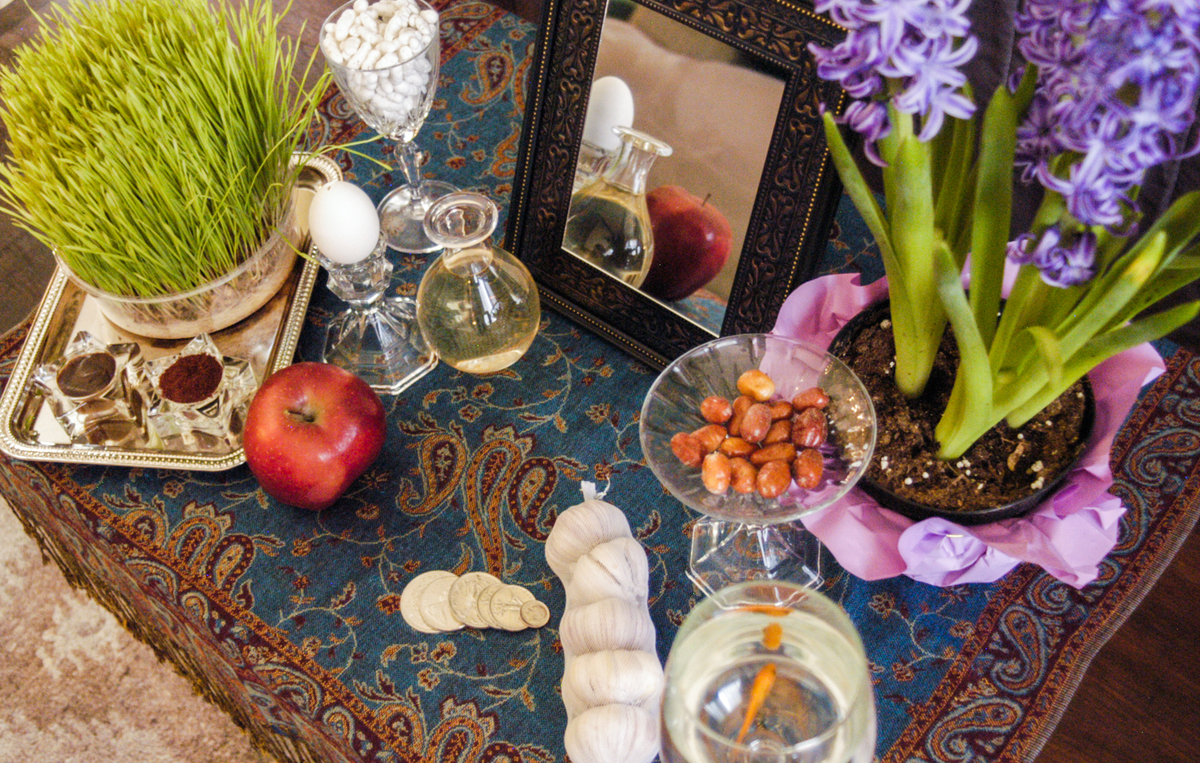 Nowruz, the Persian New Year, is a celebration of the start of spring marked through large parts of the Middle East and Central Asia. Above, a Nowruz haftseen table, laden with seven items meant to symbolize rebirth or renewal.

If you saw any people leaping over fires, grilling fragrant kebabs or holding elaborate picnics this weekend, you may have witnessed celebrations of Nowruz, the Persian New Year, which marks the start of spring across large parts of the Middle East and Central Asia.

Nowruz is often associated with the Iranian community, but it is also popular among Afghans, among others. And though the holiday officially falls on Tuesday, March 21, this year, many Afghan immigrants and refugees in the U.S. took advantage of its proximity to the weekend and celebrated it early in community centers, hotel ballrooms, private homes — and, wherever possible, the great outdoors.

Nowruz originates from pre-Islamic Zoroastrian traditions. During the Taliban years in Afghanistan, the government's rigid adherence to fundamentalist Islam resulted in a ban on the holiday. But in many parts of the country, it continued to be celebrated in secret.

Perhaps it is not surprising, then, that the holiday that resisted regime and religious change for three millennia has also survived the sometimes-long journeys of Afghan immigrants and refugees to the United States, often via Iran, Pakistan and Turkey. Nowruz and the feasts that accompany it are an important cultural and social link to Afghanistan. 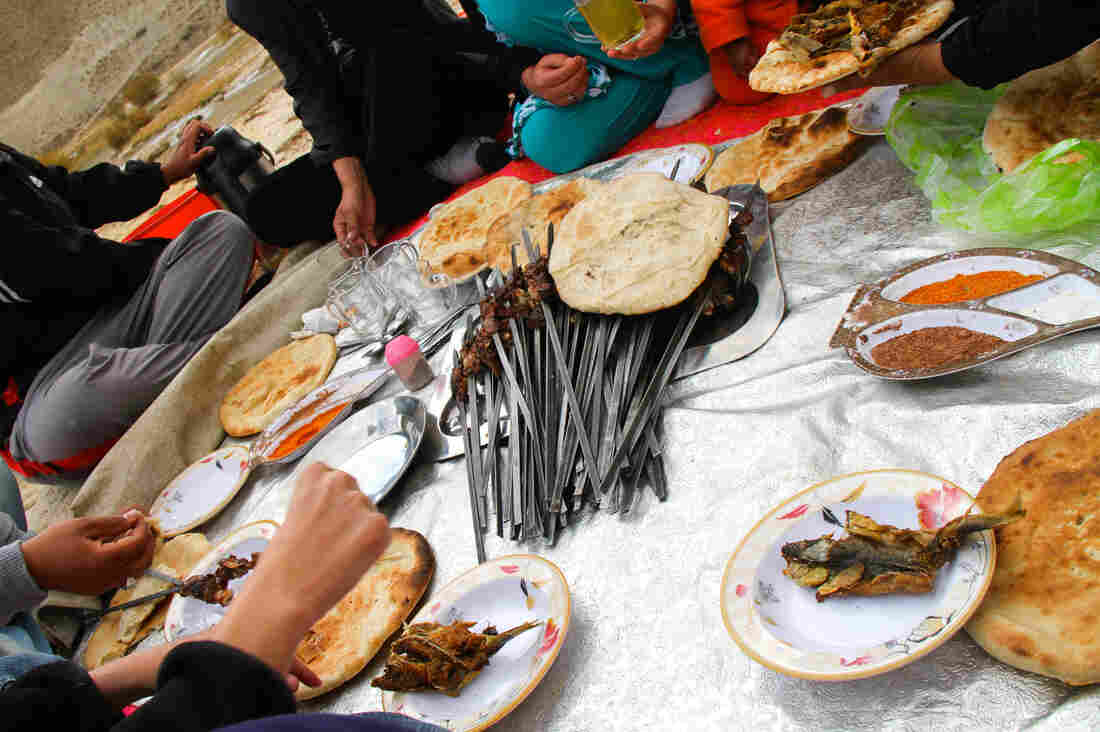 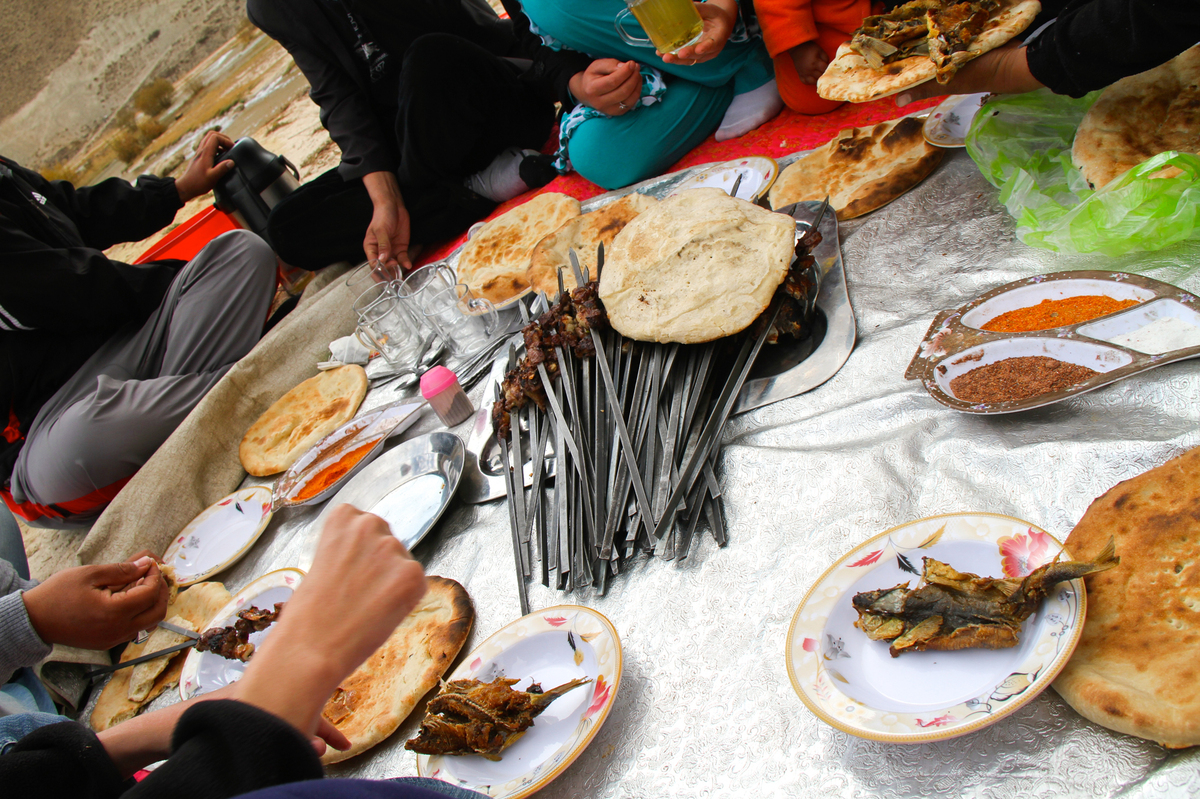 A picnic held in Band-e-Amir National Park, Bamiyan, Afghanistan in 2012. Traditionally, Nowruz marks the start of picnic season in Afghanistan.

Wazhmah Osman is an Afghan-American writer and filmmaker whose family immigrated to New York City in 1984 after years as refugees in Pakistan. Of all the Afghan traditions that her family has maintained, for her, Nowruz is the most poignant, in part because it had been banned. It also reminds her of her childhood in a cosmopolitan Kabul that no longer exists. "My first English word was 'hippie,' " she says as an example, referring to the so-called Hippie Trail on which Afghanistan was a popular stop in the '60s and '70s.

These days, her family comes together at her aunt's home in Manhattan to celebrate, cooking traditional Afghan meals such as the popular qabuli pilau, a rice dish mixed with caramelized raisins and carrots, and haft-mewa, the sweet Nowruz dessert made with seven symbolic dried fruits.

In Northern Virginia, a large Nowruz celebration took place this weekend in Manassas, with nearly 80 families in attendance. Just as it would be back home, the hall was split — with one side for men and another for women — with a catered buffet of traditional Afghan foods and a band playing Afghan music. In the weeks to come, neighbors and new friends will pay each other visits at home, in lieu of the extended family visits that they would make back in Afghanistan.

According to Mohammad Shafiq, a former senior media adviser to NATO who arrived in the U.S. three years ago under the Special Immigrant Visa program (a special program for Afghans and Iraqis who worked closely with the American government or military), Nowruz is ultimately about community.

"For Nowruz, we cook more food than usual ... so that if someone comes, we should always be prepared," Shafiq says. And considering that his apartment building alone is home to 24 Afghan families, there will be many such visits.

Chicago also hosted the first part of its Nowruz celebrations this weekend in a local hotel; the second will take place, as per Nowruz tradition, approximately 13 days later at an outdoor picnic. In the warmer months in Afghanistan, picnics are the social events of the season, with the Nowruz picnic serving as the unofficial kickoff.

Samiye Rajabi, a 23-year-old Afghan refugee, was one of the attendees in Chicago. She arrived in the Windy City by herself in January 2016, as the rest of her family members awaited the finalization of their refugee processing in Turkey, where they had already spent eight years in limbo. While she appreciated Chicago's Afghan community coming together, she had looked forward to a reunion, and a homier celebration, with her family this year.

She was especially homesick for samanak, a special Nowruz sweet paste made of wheat flour; she remembered her mother and aunts spending all night preparing it in the lead-up to Nowruz. Since it was a difficult task requiring a lot of strength, she had never taken part. This year, she thought she might.

But that was before President Trump put a 120-day moratorium on the processing of all refugees. Rajabi believes that her family was at the very end of its processing, but now, she has four more months to go before a possible reunion.

Preserving the food traditions of the Persian New Year takes on an even deeper significance for those who do not have extended Afghan communities to celebrate with. Sabira Ebaady, who refers to herself as "one of two Afghans in the state of Louisiana" (the other is her younger sister), spent many of her 10 Nowruzes in the United States alone before her sister joined her in New Orleans last year.

Their planning for Nowruz began weeks ago, when they let lentils take sprout, a tradition that serves as a physical representation of the process of rebirth. Her lentil sprouts will be the centerpiece of her Nowruz table, or haftseen, one of seven items meant to symbolize renewal. The day before the big feast, she will cook many dishes, including sebzah, a rice dish with green vegetables, which symbolize wealth and health, and the haft mewa (seven fruits) dessert.

And then, she will head outdoors to enjoy an Afghan-style picnic. It'll be less elaborate than the ones that she remembers from her childhood in Ghazni and among the refugee community in Pakistan. And rather than celebrating atop a scenic hillside, she'll instead head to a plantation outside New Orleans for the requisite picnic.

Eileen Guo is a journalist based in New York City who writes about food, culture and identity. She enjoyed two Nowruzes and numerous picnics as a digital media entrepreneur in Afghanistan.