Accessibility links
How The Peanut Butter And Jelly Sandwich Became The NBA's Go-To Comfort Food : The Salt "If there's a locker room that doesn't have it, I haven't seen it," says ESPN reporter Baxter Holmes, who expands on his recent story, which details professional basketball's obsession with the snack. 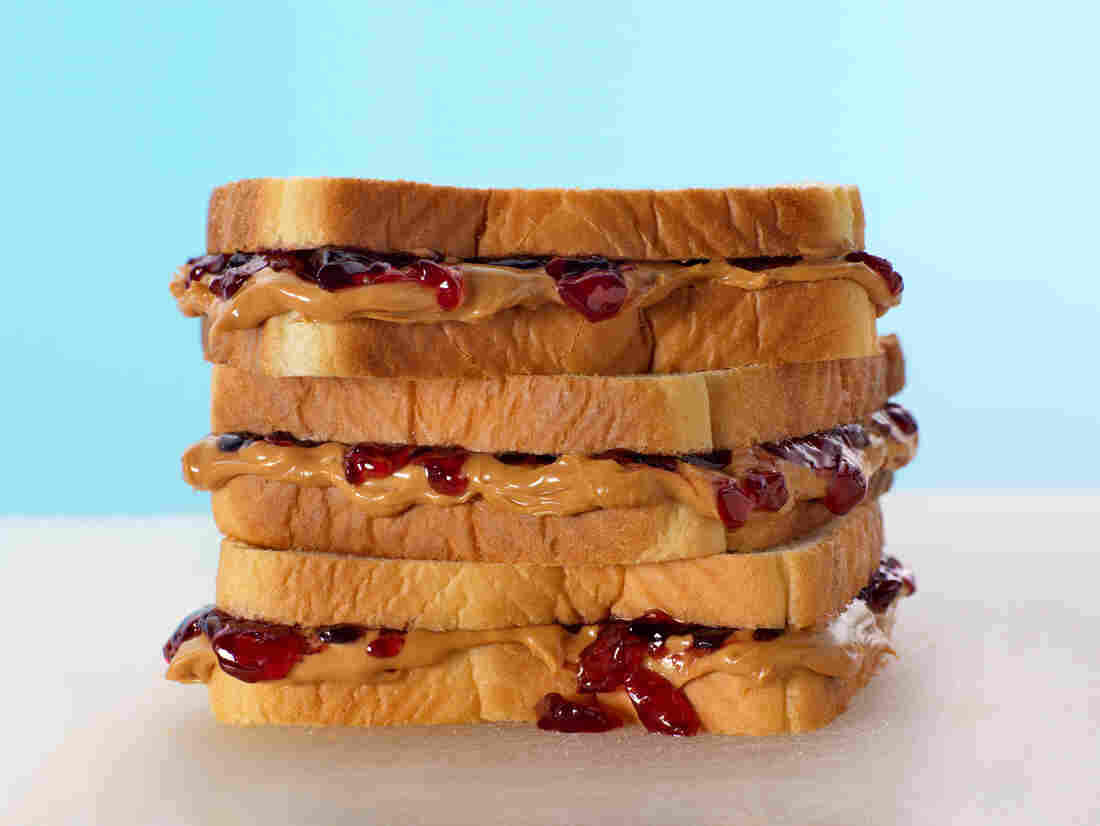 The league-wide's secret recipe to success is out: The NBA and the PB&J go together like, well ... Sharon White/Getty Images hide caption 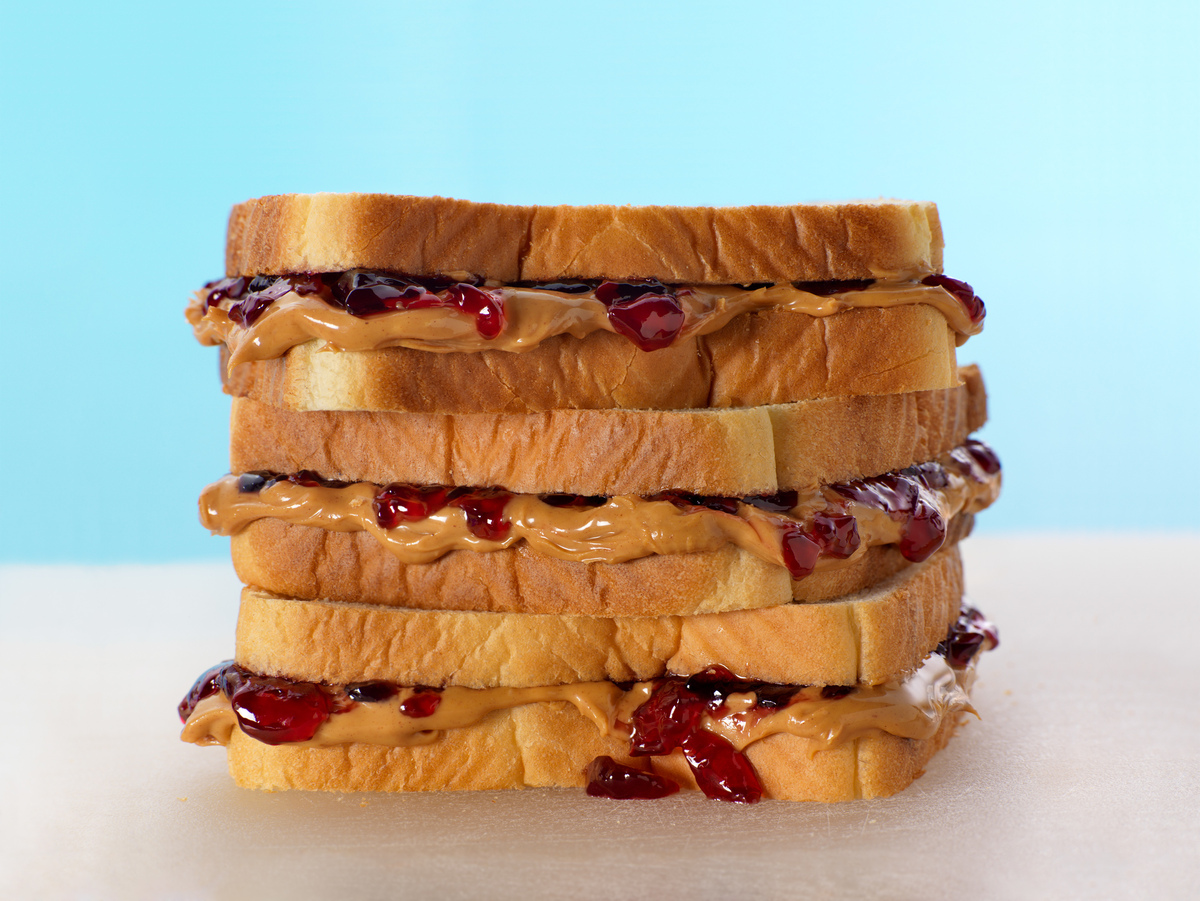 The league-wide's secret recipe to success is out: The NBA and the PB&J go together like, well ...

It's hardly unusual for athletes, both amateur and professional, to have pregame rituals. But the NBA's peculiar commitment to one grade-school snack goes deep: ESPN Magazine calls the PB&J sandwich the league's "secret addiction."

"In every NBA locker room, you'll see a variety of different foods on the table, but PB&J — if there's a locker room that doesn't have it, I haven't seen it," ESPN reporter Baxter Holmes tells Scott Simon.

In this week's ESPN Magazine, Holmes dug into how a first-grader's lunch ended up as a locker room staple for professional basketballers.

The origin of the sandwich's league-wide residence traces back to a 2007-2008 season Boston Celtics anecdote.

Former star Kevin Garnett, who's hailed for revolutionizing the league's pregame diet, fatefully "decreed one day when he was hungry — after a fellow teammate likewise said he was hungry — and wanted a PB&J — that, 'Let's get on that,' " Holmes says.

And, because Garnett played well that game: "We're going to need PB&J in here every game now."

"It spread from there," Holmes says. "And that's not to say that peanut butter jellies haven't been consumed by athletes for a long time, but I'm certainly talking about on a mass-produced scale."

But in the NBA, where a player's body isn't just a temple, but a corporation, it's not the healthiest snack. So why PB&J?

In short, it's a quick, easy-to-make comfort food that lifts players' mentality. And, as busy as the athletes are, with "41 road games a year — they could have poor travel, they could not be feeling well, traffic," Holmes says, they crave something familiar and easily digestible.

Cro-Magnon might not have taken his first step in search of a peanut butter and jelly sandwich, but, Holmes says, "all these components that he was looking for are contained within, it's one of those magical foods in that way and because of it, the mental health benefits are what a lot of experts around the NBA say is actually one of its biggest benefit, just in simply, the opioids are released. It's calming players down, making them happy. ... There are some healthy fats and proteins and that gives them a little bit of energy. But the mental side of things, I mean, it truly is a comfort food."

And these athletes aren't scarfing down your average PB&J. Within the league, a number of players are known for their preferences.

"Russell Westbrook likes to butter the inside of the bread and then put peanut butter on it after it's toasted," Holmes relays. Carmelo Anthony likes his on a cinnamon raisin bagel. Latvian-born Knicks player Kristaps Porzingis hadn't heard of a PB&J until he was drafted. "I fell in love," he told The Wall Street Journal. "I grew up on PB&J's as a kid — it fueled me," Kevin Durant told Nike, amid a sneaker collaboration inspired by the star player's penchant. "Actually, PB&J is still my go-to snack."

On whether different teams have different PB&J traditions

Certainly. So much depends on location, preferences of certain players. The Lakers have theirs catered by Whole Foods, the San Antonio Spurs have theirs catered by HEB Central Market which they have a partnership with in San Antonio. You go up to Portland: Half of their peanut butter and jelly sandwich order is toasted because the star player Damian Lillard likes them that way. You go up to Milwaukee and they're kind of one of the more interesting operations in the NBA. They do a PB&J buffet before the games, but the variety of nut butters and Nutella, all kinds of jams and jellies, different kinds of bread — they do peanut butter and jelly shakes, peanut butter and jelly oatmeal, waffles.

On whether the PB&J is a nutritional choice

Nutritionists I've talked to said it's not the healthiest snack, but it is healthier than, say, greasy junk food that they might get in arena concessions — fried food, hamburgers, whatever the case may be — particularly if there's just a little bit of hunger before a game. And then you dive a little bit into the science of it, and peanut butter and jelly is comprised of various components that humans enjoy, dating back to basically the Neanderthals when they were craving certain things for survival. Different kinds of fats and proteins and starches and what not, and this marriage of all these essential components are combined into PB&J. So when you ingest one, when you bite into one, these varied opioids are released. You're happy, most people kind of recognize that.

They hired a sports scientist from Australia who wasn't familiar with the peanut butter and jelly fad in the NBA. And he wanted to do away with a lot of unhealthy foods like candies and sodas, cookies, but he included peanut butter and jelly in that umbrella. And when the team got on the team plane for their first flight of the year, they saw it was gone and that was the first shot fired in what became a peanut butter and jelly war between him and the players. Eventually they got them back and he is no longer employed by the team.

If you go around the NBA, you're going to find all these little quirks all over the place when it comes to the peanut butter and jelly. But so they have a partnership with a fellow Ohio-based outfit in Smucker's and they provide about a dozen of the company's prepackaged "Uncrustables" PB&J's to opposing teams every night, even though there are a few teams that have told me they try to keep their players away from those because they're not very healthy.

Meanwhile, the Cavs make their own artisanal PB&J's prior to tipoff with homemade grape and raspberry jelly, almond butter and banana, and peanut butter and banana sandwiches. So they give the opposing teams one thing and they make themselves something completely different.

Well there's a whole new insight into how they were able to defeat Golden State in the last few seconds, of course which opens — what kind of PB&J does LeBron have?

I'm not particularly sure on his exact likes, but, I say this with feeling pretty confident, whatever it is that they're making, I'm sure he likes. I mean you have to remember around the NBA — and I mentioned it earlier with the Portland Trailblazers — if a player who's a star on that team has a particular preference, whether it's crust or no crust, a certain kind of bread, a certain kind of jelly, nut butter, whatever the case may be — I guarantee you that that team is going to accommodate it, and that that's probably going to be the key reason why they make whatever it is they make.

NPR's Emma Bowman contributed to this story. More importantly, she takes her PB&J with raspberry jam, in between creamy peanut butter on both bread slices a la Lakers' Brandon Ingram.