Accessibility links
Duncan Hines: The Original Road Warrior Who Shaped Restaurant History : The Salt The name on that box of cake mix belonged to a real person. Hines was a traveling salesman who just wanted to find a decent meal on the road — and ended up being America's go-to restaurant expert. 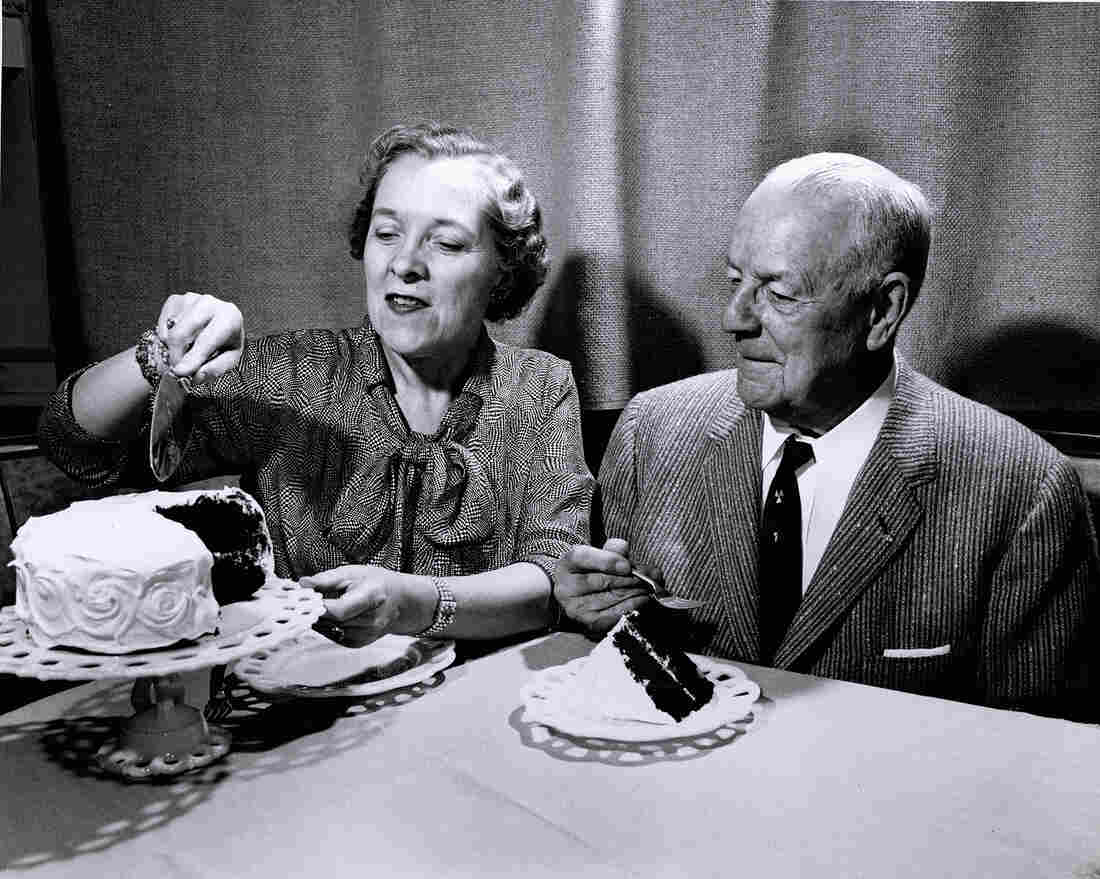 In 1957, Duncan Hines and his wife, Clara, cut a cake at the Duncan Hines test kitchen in Ithaca, N.Y. Courtesy of Department of Special Collections-WKU hide caption 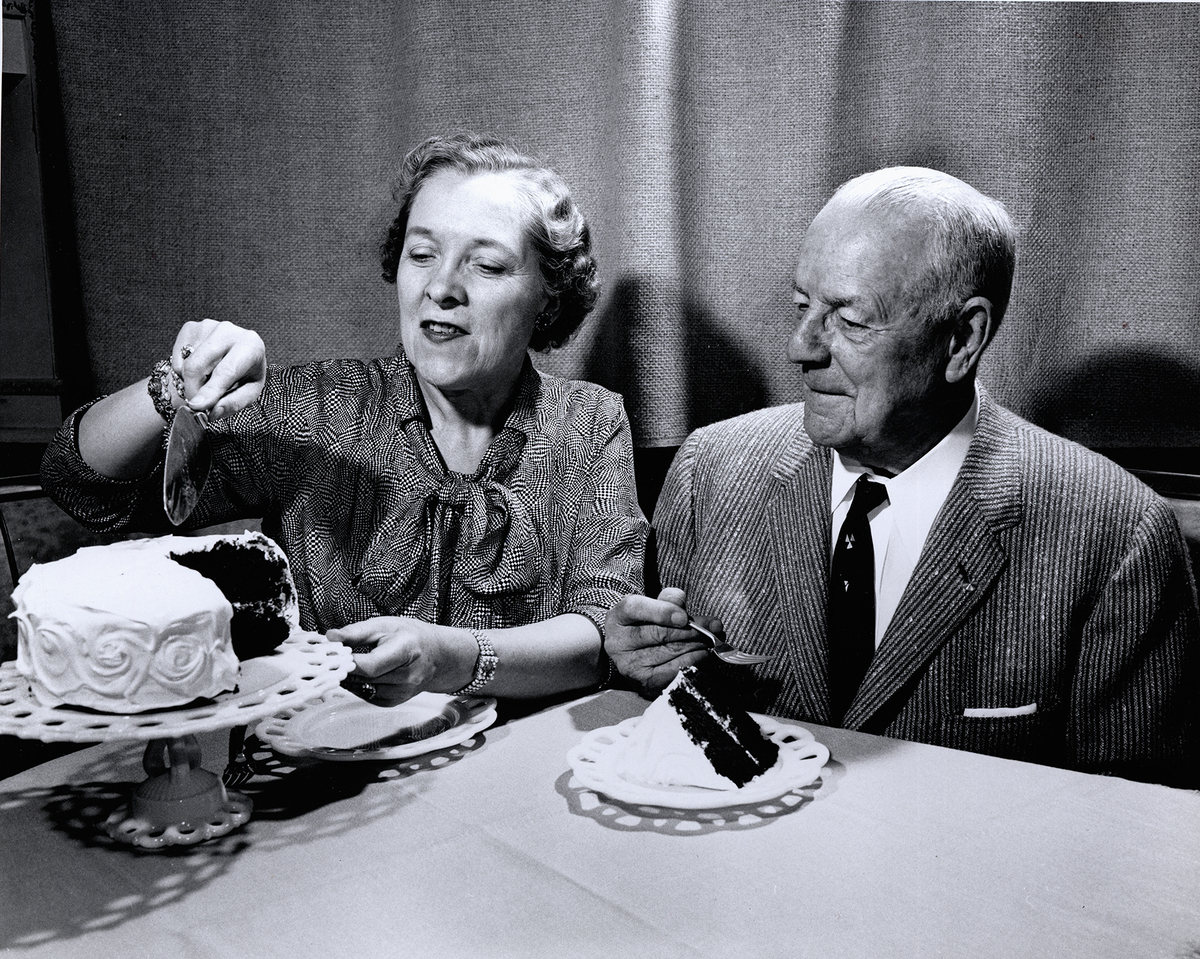 Duncan Hines, traveling salesman and future purveyor of boxed cake mix, considered himself an authority on a great many things: hot coffee, Kentucky country-cured ham and how to locate a tasty restaurant meal, in 1935, for under a dollar and a quarter. 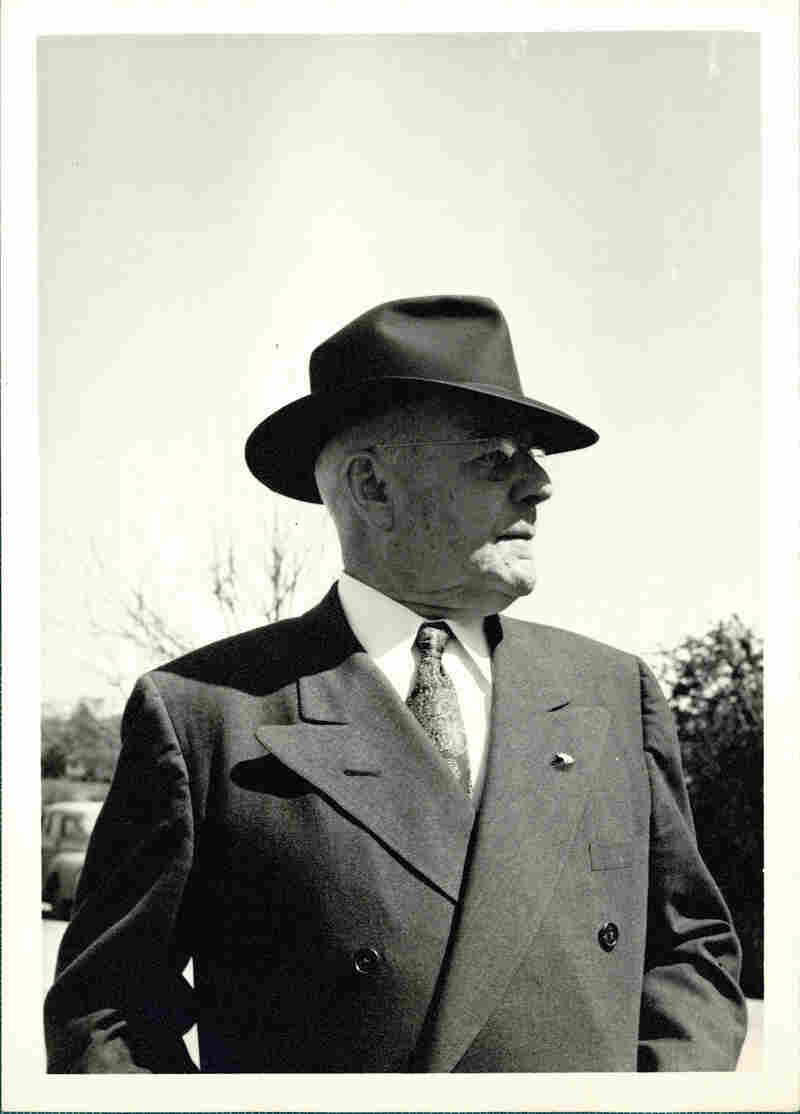 Duncan Hines wasn't a chef, he was a businessman looking for a decent meal on the road. Courtesy of Department of Special Collections-WKU hide caption 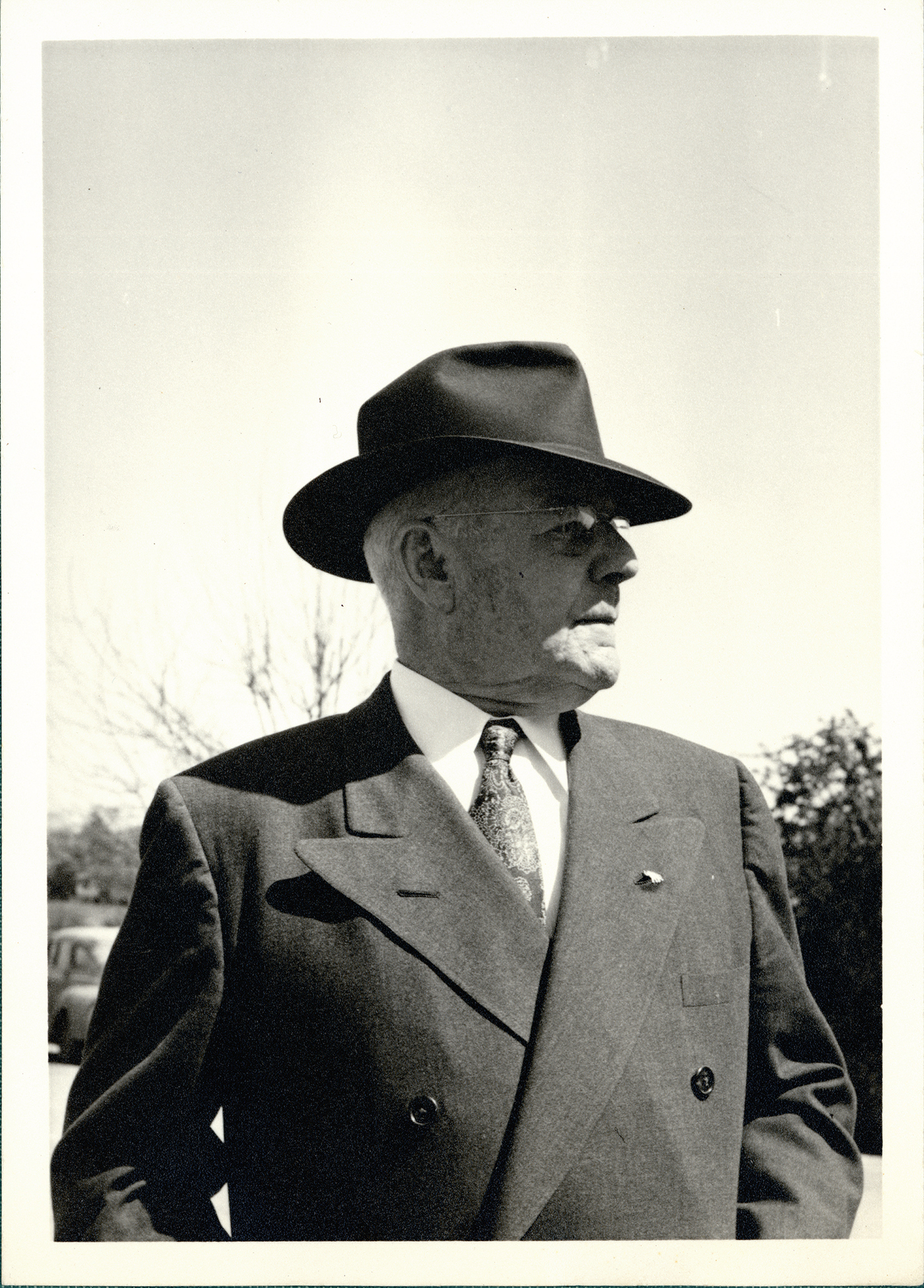 Duncan Hines wasn't a chef, he was a businessman looking for a decent meal on the road.

By the 1950s, Hines' name would be plastered on boxes of cake mix; housewives would turn to his products for consistent quality and superior taste. Newspaper photographs featured Hines clad in a white chef's apron, hoisting a neatly frosted cake or thoughtfully dipping a spoon into a mixing bowl.

But Duncan Hines wasn't a chef — in truth, he could barely cook. For most of his career, he had just been a businessman, desperate for a decent meal on the road. Through his search for the best restaurants across America, he became an accidental gourmand, an unlikely author and homegrown connoisseur.

Although boxed cake mix is the legacy that most people now associate with Duncan Hines (only after asking, "Was he actually a real person?") the supermarket foods that bear his name are only an epilogue to a storied life traveling America's back roads.

It was really his book, Adventures in Good Eating, that first put Duncan Hines on the map. And it was his tireless pursuit of good food that inspired his book.

Hines' appreciation for a good meal arose out of mere necessity. From the 1920s through the '40s, he motored across the country hawking letter openers and paperclips and subsisting on unreliable road food. It was an era long before any formal restaurant rating system existed in the U.S. The names and locations of good restaurants were conveyed by word of mouth; for an out-of-town traveler, locating a decent supper was often a daunting and discouraging mission. And although Europe had relied on The Michelin Guide since 1900, middle America in the 1920s and '30s was still a land of culinary mystery and inconsistency. 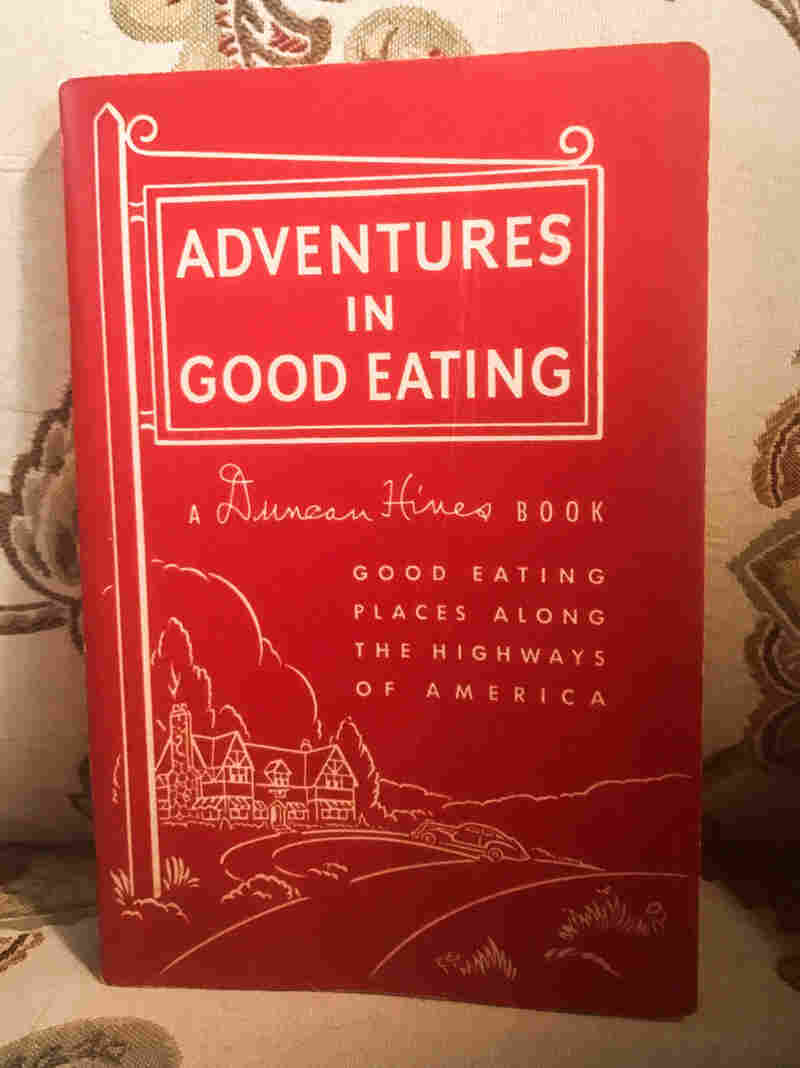 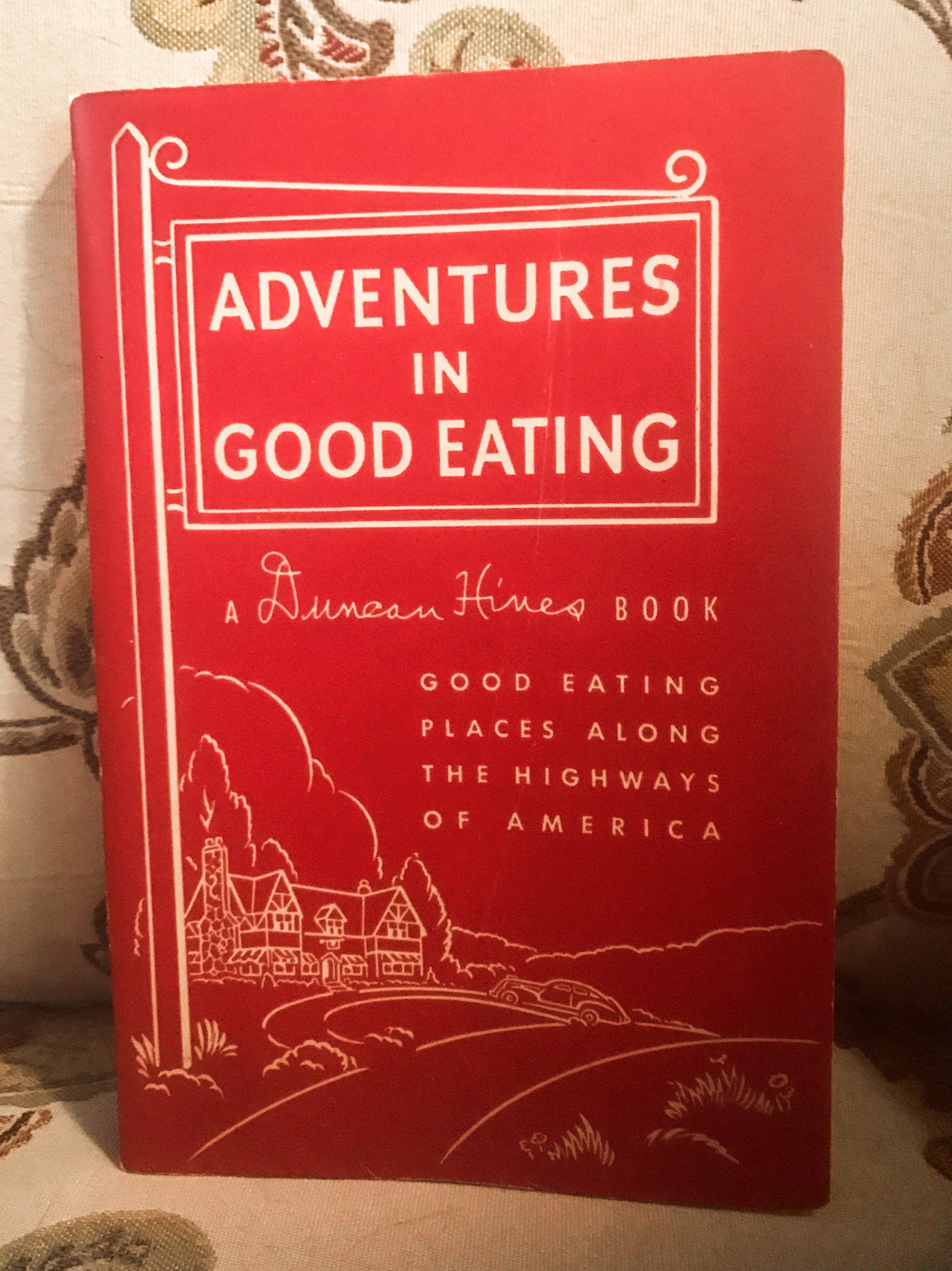 It was also a time of growing wanderlust. Highways such as Route 66 were connecting small towns, and eager motorists often embarked on weekend road trips. According to the University of Michigan, in the '20s "the number of automobiles in America rose from eight million to twenty-three million and along with the increase came thousands of barbeque shacks, ice cream stands and diners." Many new restaurants were not listed on maps. And they were often hidden on dusty back roads that health inspectors didn't travel. (Even if they did, there was no standard for restaurant food safety in America at that time.)

Desperate for a clean place to dine, Hines became an investigative epicurean and self-made restaurant critic. He carried a tiny journal in his coat pocket, jotting down the precise locations of his favorite places. No restaurant was off limits for the inquisitive Hines. "The kitchen is the first spot I inspect in an eating place," he wrote. "More people will die from hit or miss eating than from hit and run driving," he joked — though Hines clearly thought food safety was no laughing matter.

He frequently popped into the kitchen to scrutinize how staff handled food and then swung around back to investigate the restaurant's garbage pile. He meticulously recorded the names of the most pristine diners, the inns with the tastiest prime roast beef, and where to find the stickiest honey buns. He appreciated regional cuisine, quickly discovering in which part of the country to brake for broiled lobster tail (New England) and where to stop for fried chicken (Kentucky).

Hines noted whether a restaurant had air conditioning, its hours of operation and its prices for breakfast, lunch and dinner. "His restaurant notes were extraordinarily accurate," says Louis Hatchett, author of the book, Duncan Hines: How a Traveling Salesman Became the Most Trusted Name in Food. "As word spread among his family and friends, people were begging him to share the list he had created. There was nothing out there like it," he says. "In 1935, sick of being pestered, he finally sent out a little blue pamphlet in his Christmas cards, containing a list of 167 restaurants across 33 states that he could safely recommend."

Soon, Hines was receiving postcards from from salesmen, newlyweds and other travelers all over America seeking his recommendations for good, clean restaurants.

In 1936, at 55, Hines self-published his first edition of Adventures in Good Eating and sold them for $1 each. It contained the names and locations of 475 restaurants from coast to coast that had Hines' rigorous seal of approval. "The books were sold through word of mouth, but they quickly sold out. The following year he raised the guide's price to $1.50 — and that's where the price would stay for the next 25 years," explains Hatchett.

Each year, until he retired in 1954, Hines broadened his exploration of America's restaurants and published an updated edition of Adventures in Good Eating. Restaurants fell in and out of Hines' favor — if they could not deliver a quality meal or allow a peek into the kitchen, they were removed from the book. He refused to accept any advertisements or endorsements from restaurants in exchange for reviews. Millions of discerning travelers kept his book in their glove compartments to guide them as they rumbled down gravelly country roads in unfamiliar locations. 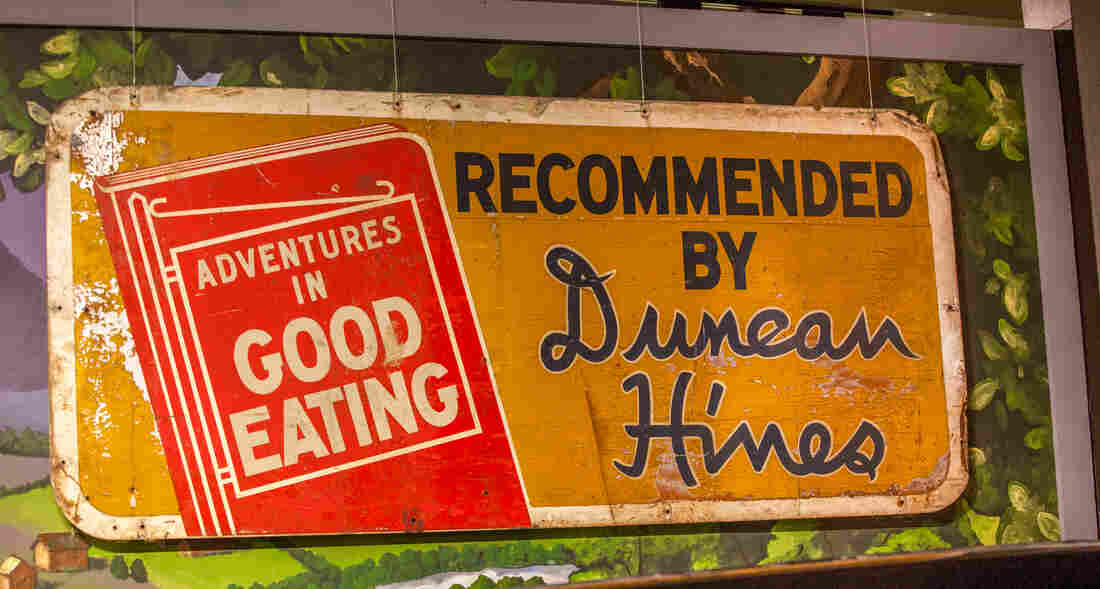 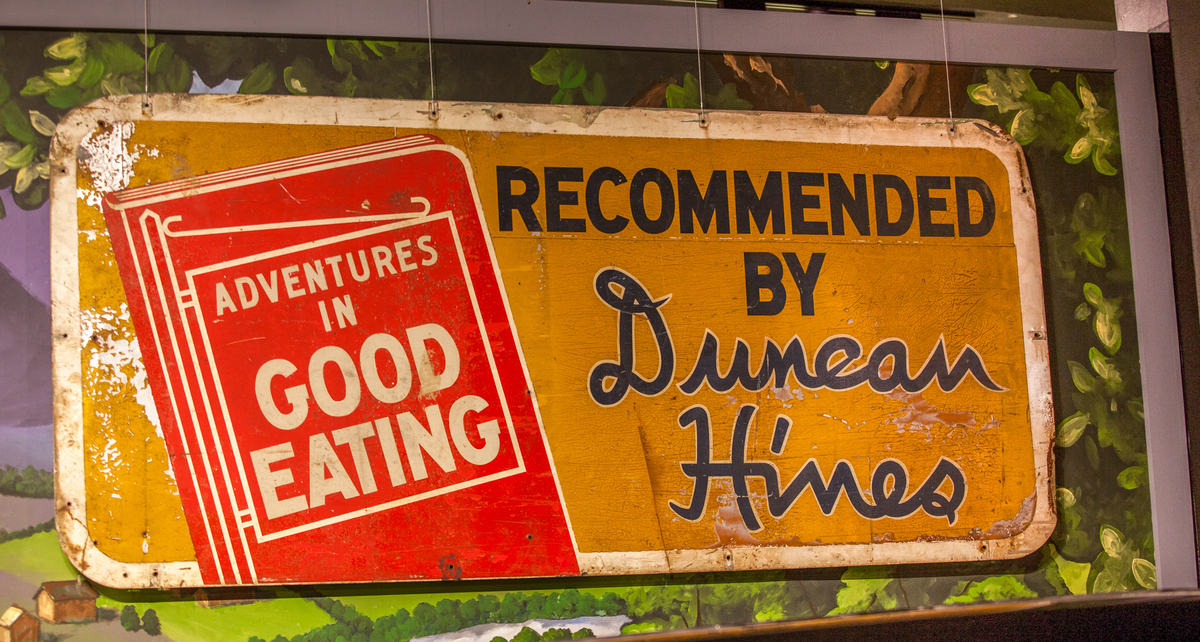 A roadside sign advertising Duncan Hines' Adventures in Good Eating is on display at the Kentucky Museum at Western Kentucky University.

"Recommended by Duncan Hines" became the gold standard in dining by the 1950s. Restaurants endorsed by Hines tacked up metal signs in their front windows. As his authority grew, Hines published Lodging for a Night (1938) and Adventures in Good Cooking (Famous Recipes) and the Art of Carving in the Home (1939). In 1952, when Hines was 72, he partnered with Roy H. Park to form Hines-Park in Ithaca, N.Y., allowing the Duncan Hines name to appear on everything from cartons of ice cream to the now-famous cake mixes. Two years before his death in March of 1959, the entire franchise was sold to Procter & Gamble. 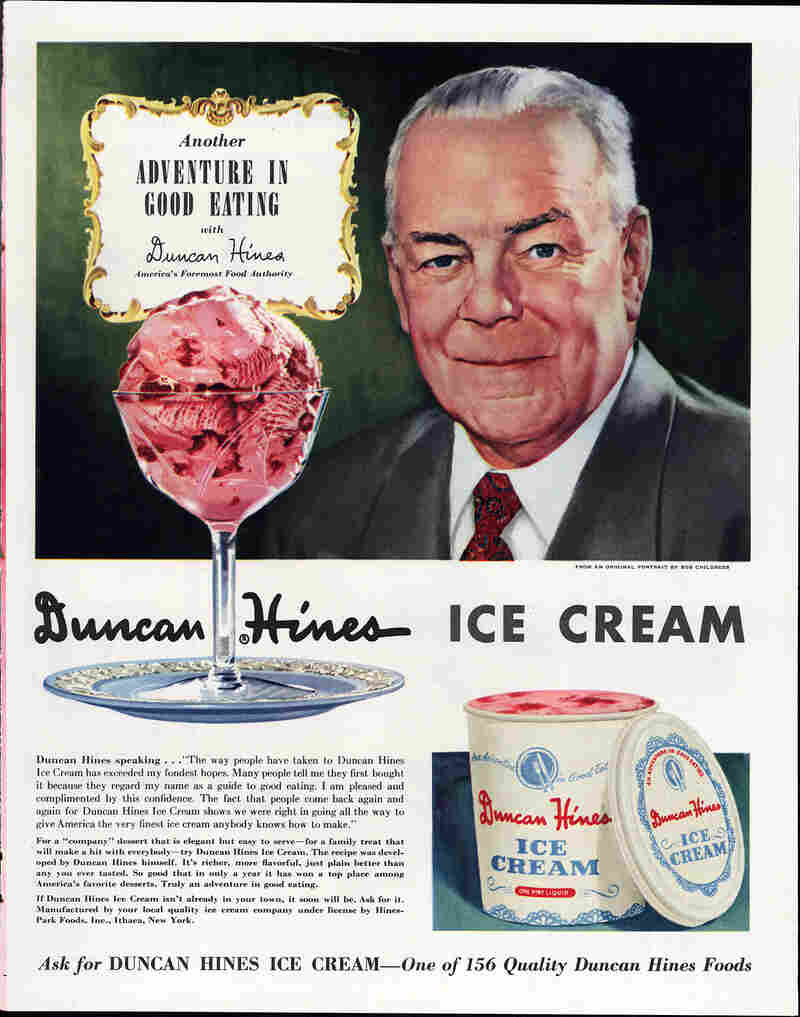 A 1950s ad for Duncan Hines ice cream quotes Hines as saying "Many people tell me they first bought it because they regard my name as a guide to good eating." Courtesy of Department of Special Collections-WKU hide caption 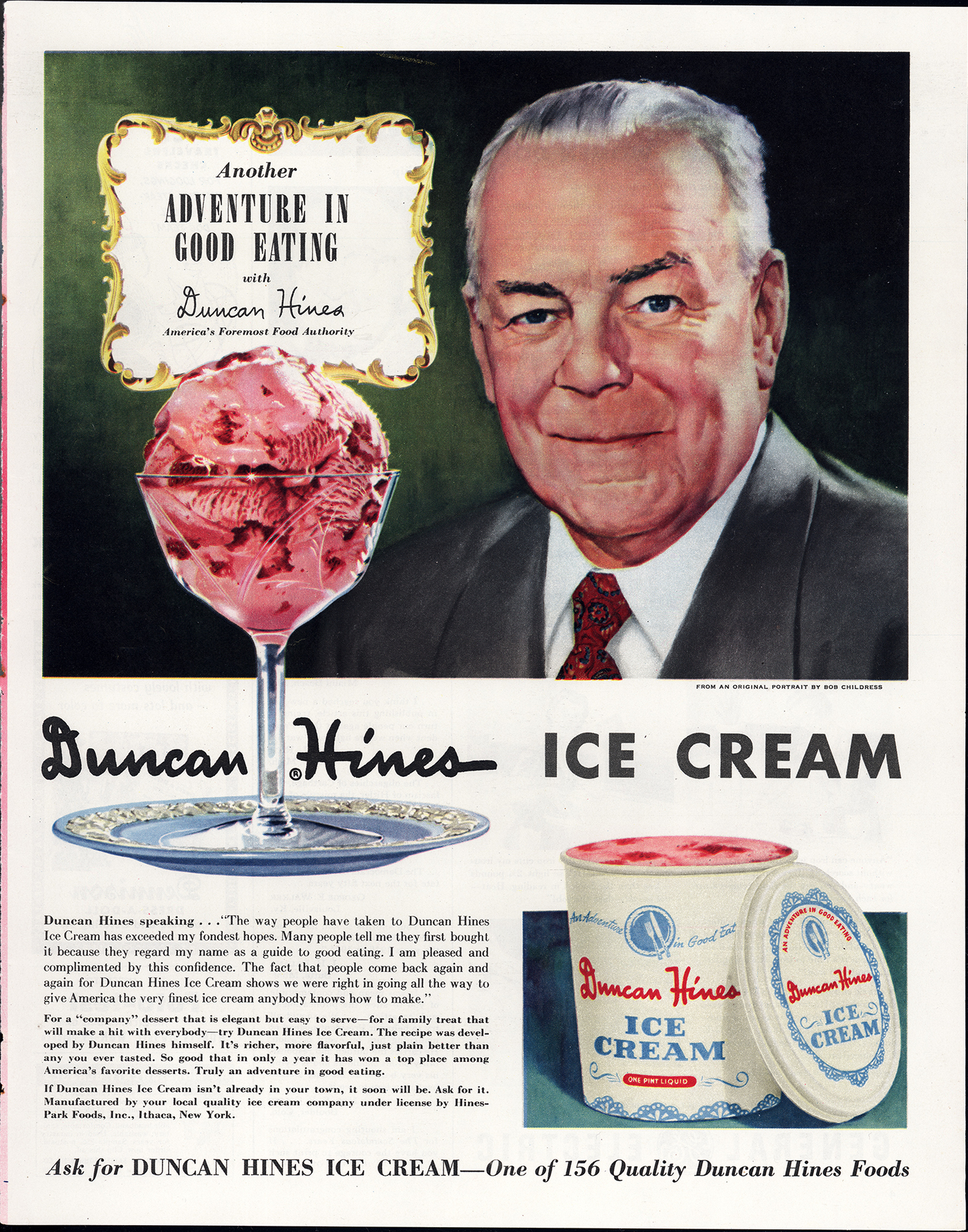 A 1950s ad for Duncan Hines ice cream quotes Hines as saying "Many people tell me they first bought it because they regard my name as a guide to good eating."

Thanks to Ebay and rare book vendors, there is resurging interest in Adventures in Good Cooking. History lovers and discriminating foodies congregate on the forums of Roadfood.com to share modern forays into Hines' antiquated restaurant scene.

Jim Pfefferle, a forum member and engineer from Wisconsin, views Duncan Hines' swift rise to fame as compelling as the material in his books. "It's kind of meteoric, what Duncan Hines did," Pfefferle tells NPR. "He was unknown when he published his first guidebook in 1936 and then there was a World War. By 1951 he was famous, the one person in the United States that anyone would go to for an authority on food. Less than 10 years later, he was gone."

Pfefferle, along with other members of the forum, has spent the past two years painstakingly gathering a list of restaurants from Hines' books that are still in operation. He says it has been an intimidating task filled with many gastronomic dead-ends, but he believes that about 37 of the original 167 restaurants on Hines' 1935 list remain.

Hines often said, "Nearly everyone wants at least one outstanding meal a day." This seems as true now as it did a half-century ago. But long before Yelp or TripAdvisor offered restaurant reviews with the click of a button, Hines was doing it his own way, by traveling the highway with his pencil and notebook, changing the way America ate on the open road — one adventure at a time.

Nicole Jankowski is a freelance food, history and culture writer based in Detroit. You can find her on Facebook here.