Accessibility links
What Gave Some Primates Bigger Brains? A Fruit-Filled Diet : The Salt A new study suggests that diet had a big influence in driving the evolution of brain size in primates. Monkeys who thrive on fruit have bigger brains than their plant eating neighbors. 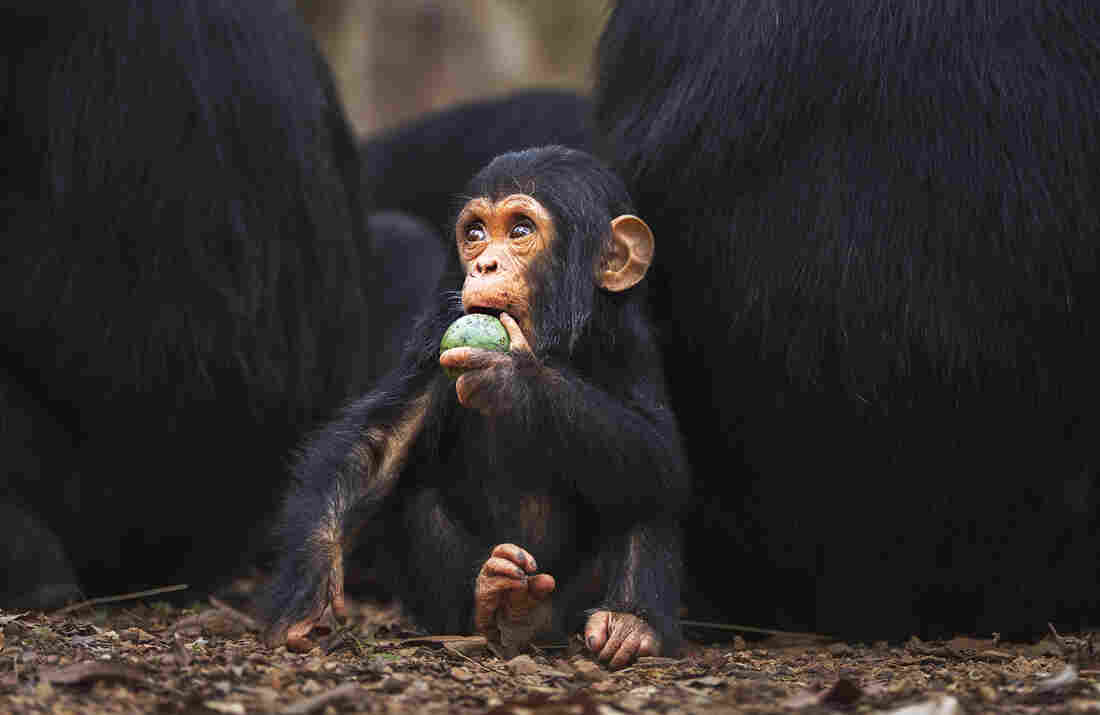 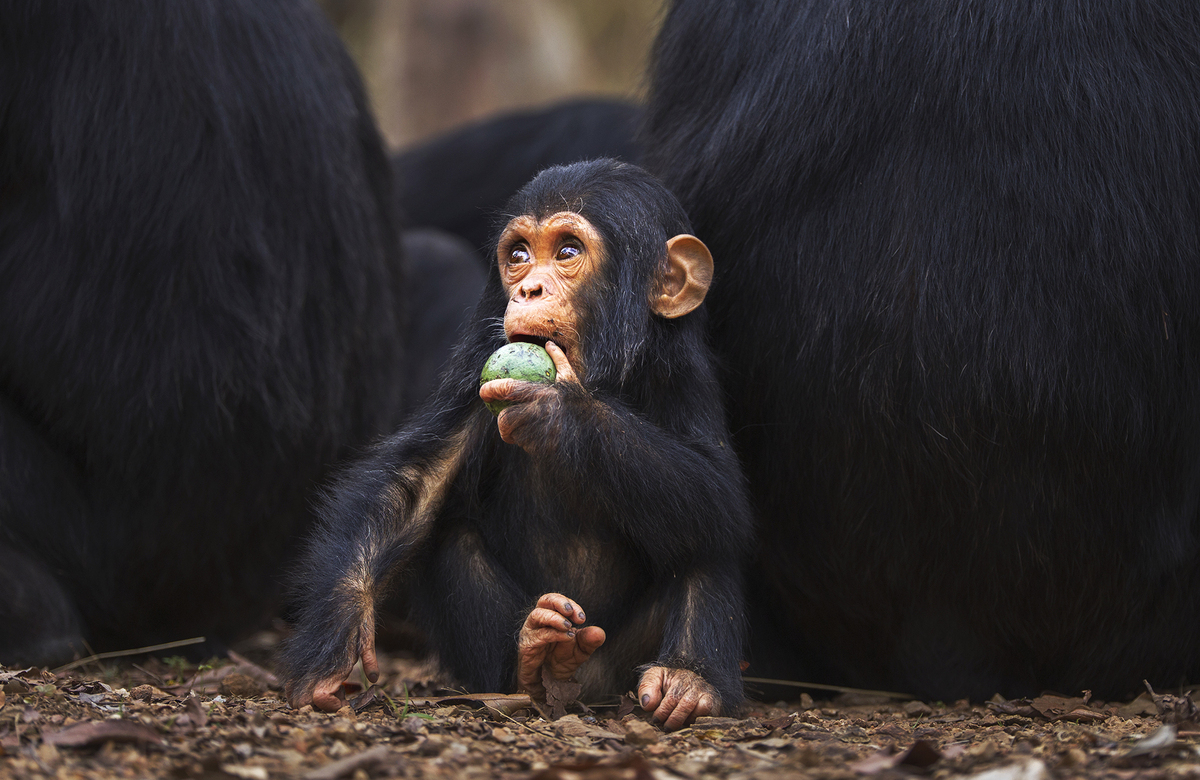 Compared to leaf-eaters, primates who ate fruit had around 25 percent more brain tissue.

Primate brains may have grown larger and more complex thanks to a fruit-filled diet, a new study suggests.

The researchers analyzed the brain sizes and diets of over 140 primate species spanning apes, monkeys, lemurs and lorises and found that those who munched on fruit instead of leaves had 25 percent more brain tissue, even when controlling for body size and species relatedness. Take spider monkeys and howler monkeys, for example. They both live in the rain forests of South America in groups of about 10. But where howler monkeys leisurely munch on trumpet tree leaves all day, spider monkeys venture out in small groups shortly after sunrise to forage for passion fruit and other ripe morsels. Despite their similar environments and social setting, spider monkeys have bigger brains than howlers. 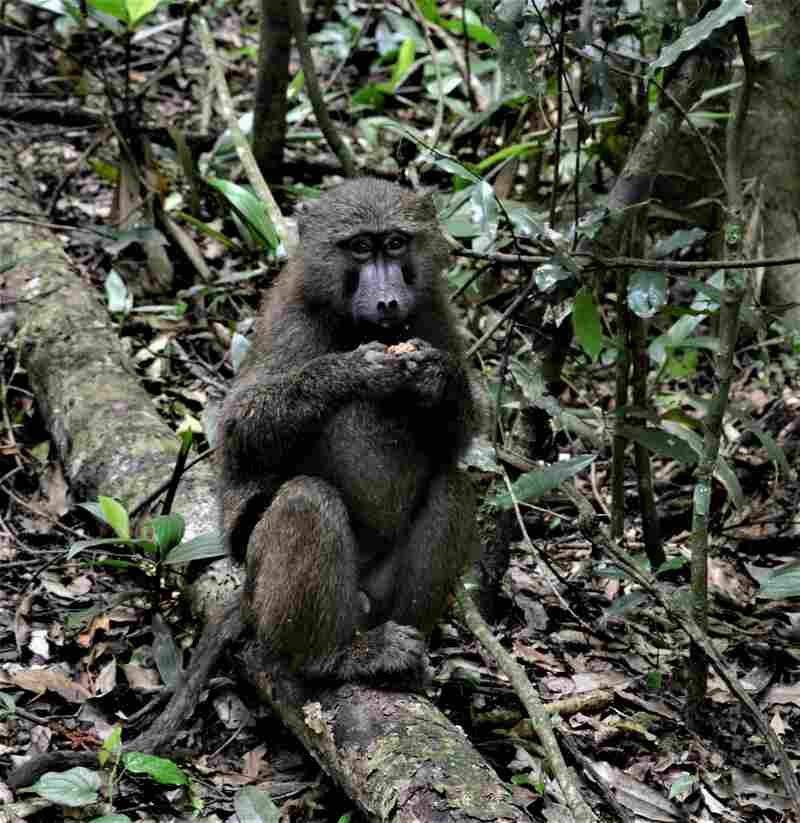 Primates like this baboon may have evolved larger, more complex brains over generations of seeking out fruit rather than sticking to low-calorie leaves. Nature and the Nature Research Journals hide caption 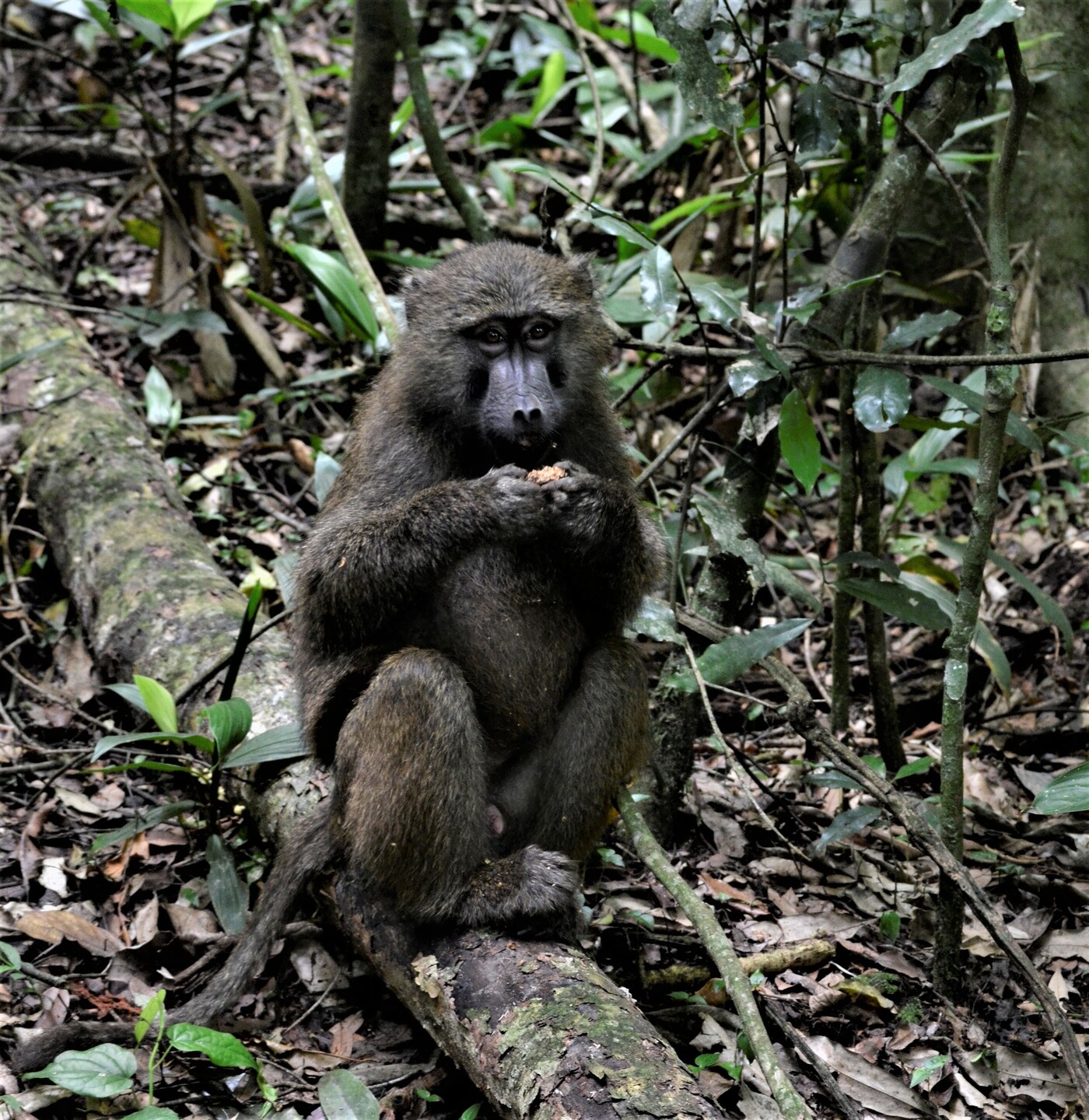 Primates like this baboon may have evolved larger, more complex brains over generations of seeking out fruit rather than sticking to low-calorie leaves.

Nature and the Nature Research Journals

"If you are foraging on harder-to-access food, like fruit instead of leaves, then you need to have all the cognitive strategies to deal with that," says Alex DeCasien, a doctoral candidate at New York University and lead-author on the study. Fruit can vary from season to season, be tucked away in hard-to-reach nooks, and require skill and strength to crack into, smarter primates could be more apt to scope it out and reap its nutritious rewards. "All of that is so much more complicated than just grabbing a leaf and eating it," she says. And so, a diet of fruit may in turn have led to the evolution of the bigger brains over generations, she adds.

Monkeys and apes who incorporated animal proteins into their diets also had slightly larger brains than the leaf eaters, the Nature Ecology and Evolution study found. Again, the researchers speculate this could be because primates need more cognitive power to hunt and consume things like frogs, birds, and insects compared to the brain power needed to eat leaves. But DeCasien says she and her colleagues were surprised to find that these omnivores have significantly smaller brains than fruit-eaters. They suspect it could be because many of these omnivores, like lemurs and lorises, eat insects. "[Insects] may be abundant like leaves and might be easy to capture," she says.

The findings challenge a long-held scientific hypothesis that the size of social groups among primates is the biggest determinant of brain size. The bigger the social group, the more complex the social interactions, leading to the evolution of larger brains with more computing power, the theory suggests.

Previous studies have shown that larger groups of primates with more complex social structures are correlated with larger brains. In fact, scientists have used that idea – called the social brain hypothesis – to explain why humans and certain other primates like chimpanzees and bonobos have bigger brains than other primate species. (Now, diet is thought to have played a big role in making human brains bigger than any of our primate cousin's. As we've reported before, scientists think eating cooked meat gave our bodies some extra energy to fuel the building of bigger brains.)

But the authors of the new study compared body size, diet, and social lives (factors like whether they were solitary or lived in pairs, monogamous or polygynous, and the size of their groups) of these various primate species to their average brain sizes. Overall, diet appeared to be a more consistent predictor of brain size for a species than social complexity — brain sized increased with fruit eating more consistently than with greater number of social connections.

"This study shows social group size is not a global predictor of brain size," says Stephen Montgomery, a researcher studying brain and behavioral evolution at the University of Cambridge who wasn't involved with the work. He adds that size of social groups don't always correlate with bigger brains. Montgomery says this is because primates are really diverse in behavior and habitat — from solitary slow lorises that creep through swamp forests to zippy capuchin monkeys that live in groups nearing 40 members. So while a complex social life might drive one species to evolve bigger brains, another species' brain size might be influenced by other factors, like diet. "As the authors show, one exception may be diet," he says, "which directly relates to the basic currency of any biological system: energy."

But Robin Dunbar, a professor or evolutionary psychology at the University of Oxford and creator of the social brain hypothesis isn't entirely convinced by the new findings. Dunbar has researched the social brain hypothesis for two decades but wasn't involved in the new study. "They assume that social group size and diet are two alternative explanations for brain evolution," he told The Salt in an email. "They are not," he says, suggesting that both could contribute together. Also, he adds that group size and social complexity is more of a predictor of the volume of the neocortex, a part of the brain that's responsible for sensory perception, language, cognition and more. In other words, the more complex a social group, the bigger the size of the neocortex, according to previous studies. The authors of the new study should have considered looking more closely at the neocortex, Dunbar suggests.

DeCasien agrees that diet and social lives are probably both at play here. "Diet, social structures, cognitive abilities — they're likely to have co-evolved together in primates," DeCasien says. However, she is quick to note that these evolutionary trends take many generations and millions of years to manifest. So don't go looking to eat more fruit because of the new findings – sure, they pack a nutritional punch, but it doesn't mean they will make you and me any smarter.