Accessibility links
Deportation Fears Prompt Immigrants To Cancel Food Stamps : The Salt Groups that help low-income families get food aid report a big drop in the number of immigrants seeking help. Some are canceling government benefits for fear it will affect their immigration status. 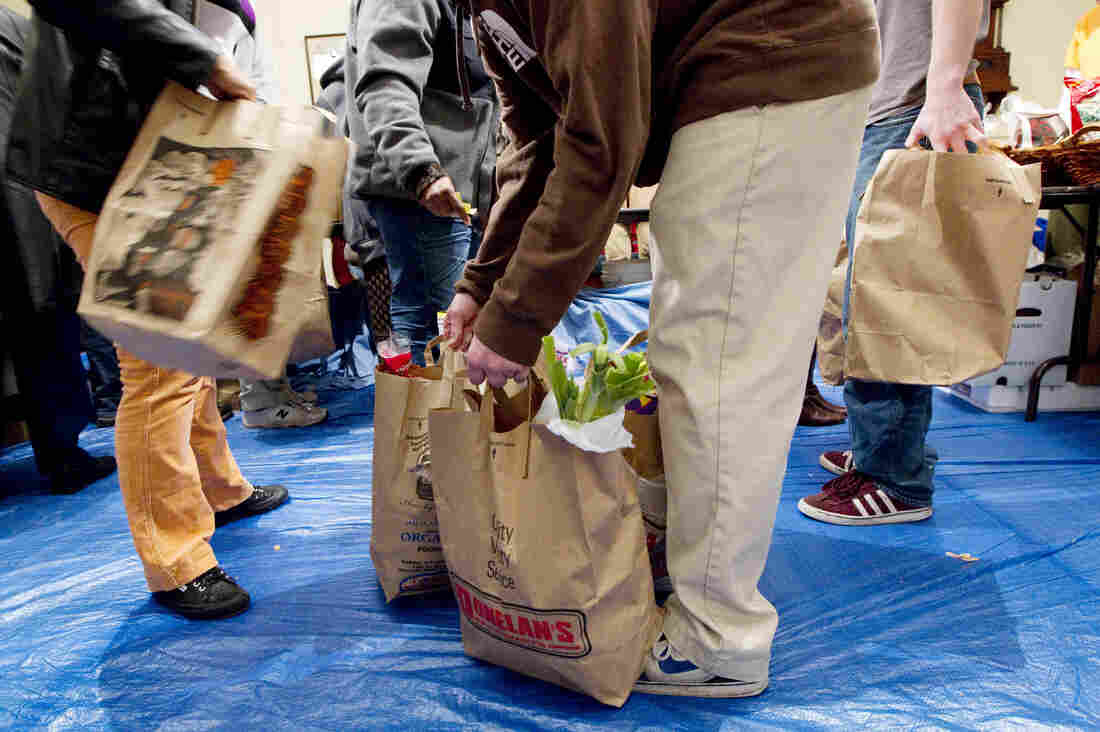 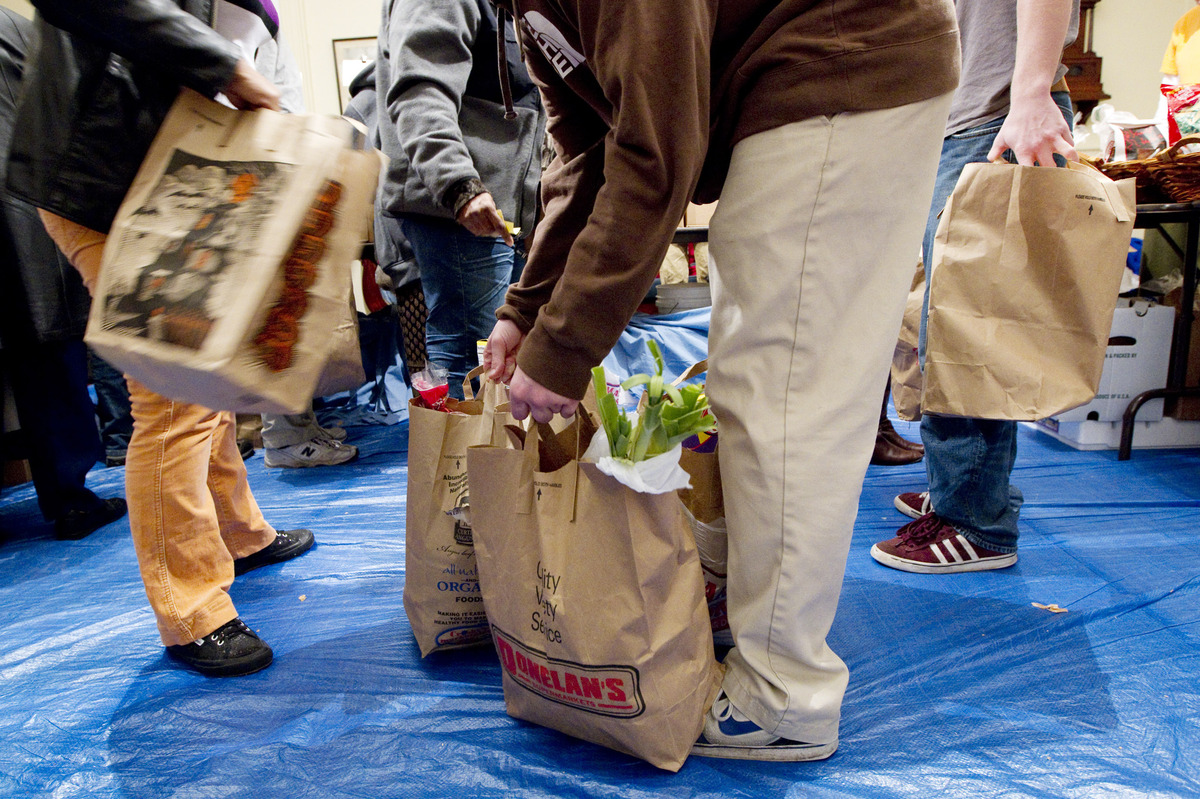 Volunteers gather bags of groceries for people seeking assistance at a food pantry in Concord, Mass. Many groups that help low-income families get food aid say they've seen an alarming drop recently in the number of immigrants applying for help.

Groups that help low-income families get food assistance are alarmed by a recent drop in the number of immigrants seeking help. Some families are even canceling their food stamps and other government benefits, for fear that receiving them will affect their immigration status or lead to deportation. Many of the concerns appear to be unfounded but have been fueled by the Trump administration's tough stance on immigration.

Officials at Manna Food Center in Montgomery County, Md., report that about 20 percent of the 561 families they have helped apply for food stamps, or SNAP benefits, in the past few months have asked that their cases be closed.

Maria Chavez, an outreach worker for Manna, says her immigrant clients are scared, especially if they're unauthorized parents getting SNAP benefits for their eligible American children.

"They say, 'I want to close my food stamp.' And I say, 'Why you want to close it?' They say, 'Well, because I am afraid that something [will] happen to me or they [will] deport me,' " says Chavez.

Jim Wengler, director of benefits access at Hunger Free New York City, says fewer immigrants have also been showing up recently at the 20 sites his group serves around the city. And he says some noncitizens — even those in the country legally — want all of their government benefits canceled, including Medicaid.

"Which is really frightening because these are families that are often working minimum-wage jobs, trying to raise children, trying to do the right thing, and with the help of these benefits are getting by. But without them, [they] will be in a really desperate situation," Wengler says.

Nonprofits around the country say they're seeing similar declines, although there are no hard numbers to back up the claims.

Advocates say the concerns seem to be twofold. Unauthorized immigrants, who can't get benefits themselves, are worried about getting deported if they receive benefits for their children. And lawful permanent residents are worried that receiving government aid — which they generally have to wait five years to do — will jeopardize their chances of becoming citizens.

There's no evidence either of these things will happen, but rumors have been flying.

"There's so much misinformation that it's creating a lot of anxiety among all immigrants right now," says Matthew Lopas, an attorney with the National Immigration Law Center, which is trying to allay people's fears. "Nothing in the law has changed as of now, and there's certainly no danger at this point in using programs for which a person is eligible."

Still, President Trump has made clear that he would like to restrict both illegal and legal immigration. In an address to Congress last month, he said that the nation's current immigration system is a drain on American taxpayers and that the country should be more selective about whom it lets in.

"It's a basic principle that those seeking to enter a country ought to be able to support themselves financially. Yet, in America we do not enforce this rule, straining the very public resources that our poorest citizens rely upon," Trump told Congress.

Many economists disagree that's the case, but there are those within the administration who are concerned about immigrants' use of government aid. In January, a draft White House executive order was leaked that proposes new limits on the use of public benefits by those seeking admission into the United States and lawful residency.

The order hasn't been signed, and it might never be signed. But Marco Liu, director of advocacy and outreach for the Community Food Bank of Southern Arizona, says the draft order and stepped-up immigration enforcement make it difficult to convince noncitizens that they should continue to apply for the benefits they need.

"That's the sensitive and tricky part, because honestly, if I were in their shoes, I might be just as apprehensive," says Liu.

One additional note. We tried repeatedly to find immigrants willing to talk to us for the story, even without using their names. But we were unable to do so, which is highly unusual. Liu says people are so worried, they don't want to take any risks.

In the audio of this story, as in a previous Web version, we mischaracterize the draft executive order that leaked from the White House. The order proposes new limits on the use of public benefits, not by people seeking citizenship, but by people seeking admission into the U.S. and lawful residency.