Accessibility links
The Tahri That Binds: How A Sweet Rice Dish Connects A Woman To Her History : The Salt Making the traditional foods of home on the holiday of Cheti Chand — which falls on March 29 this year — helps a member of the Hindu Sindhi diaspora feel less disjointed.

The Tahri That Binds: How A Sweet Rice Dish Connects A Woman To Her History

The Tahri That Binds: How A Sweet Rice Dish Connects A Woman To Her History 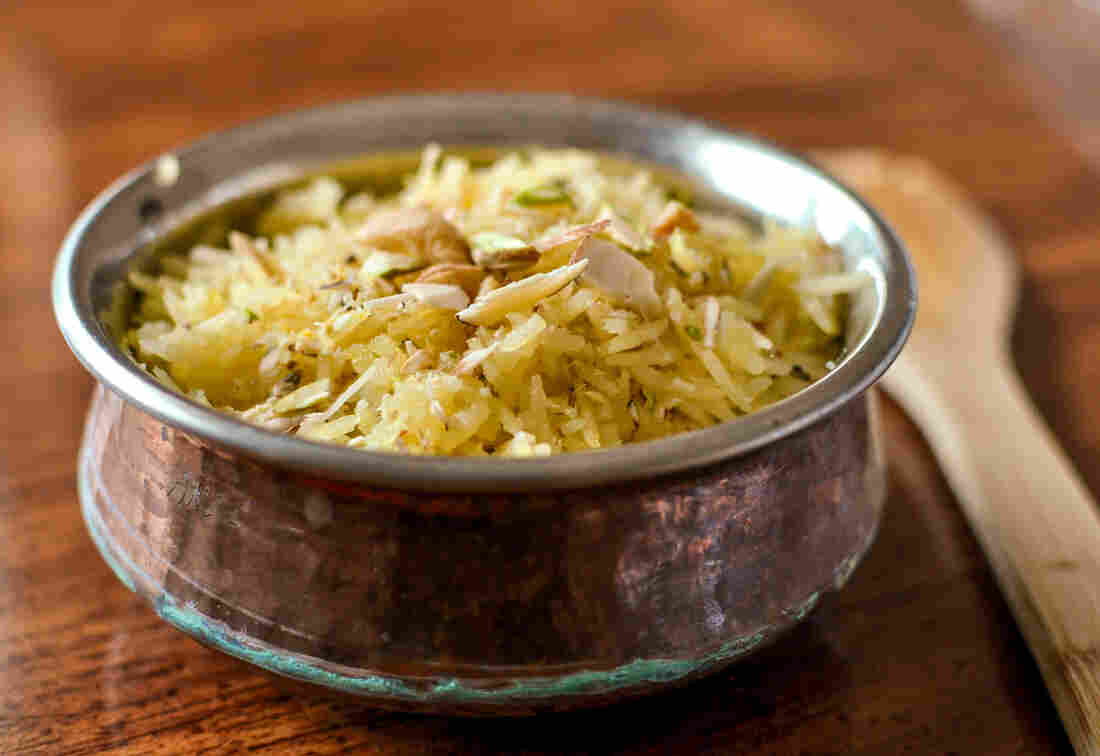 There are many rituals associated with the Hindu Sindh holiday Cheti Chand, which falls on March 29 this year. One that continues to hold meaning for the author is the consumption of tahri, or sweet rice, during langar, the communal meal at the end of the celebration. Pooja Makhijani for NPR hide caption 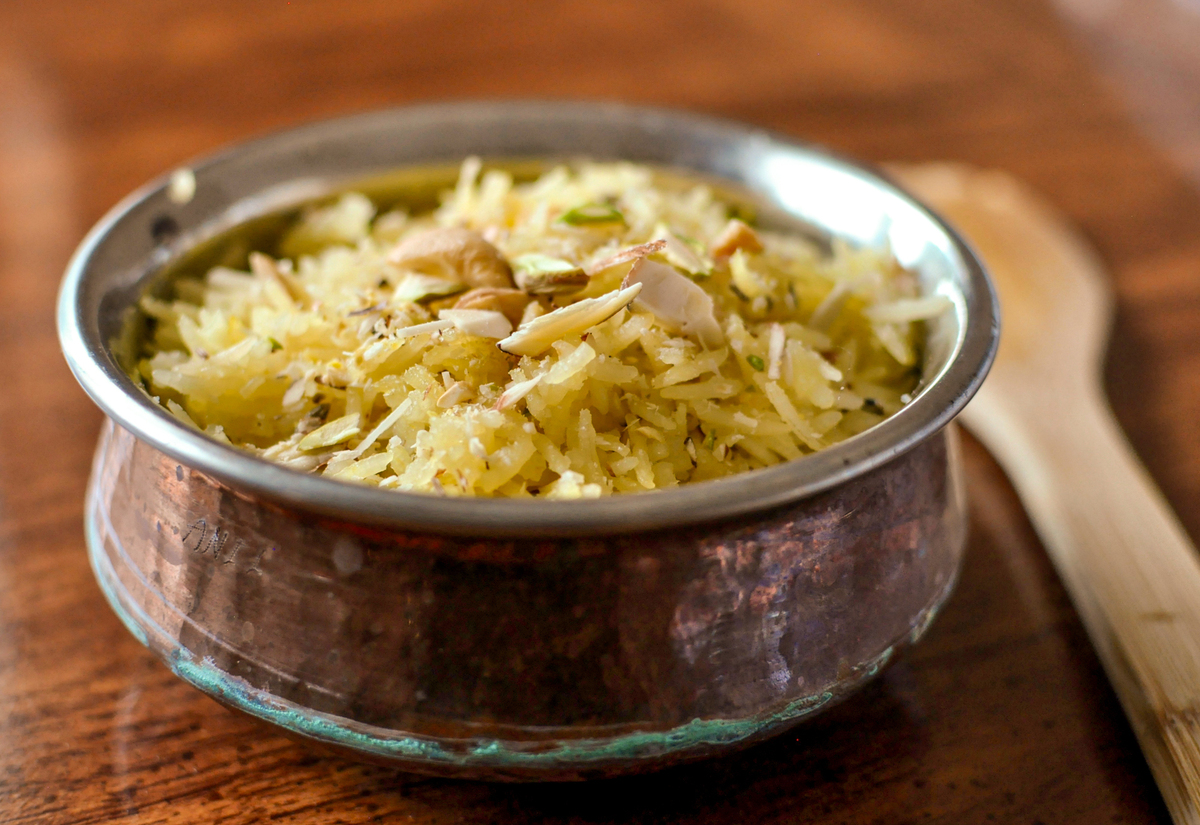 There are many rituals associated with the Hindu Sindh holiday Cheti Chand, which falls on March 29 this year. One that continues to hold meaning for the author is the consumption of tahri, or sweet rice, during langar, the communal meal at the end of the celebration.

I have always found it difficult to explain my family's syncretic faith traditions to both white Americans and to other South Asians. We are Hindu Sindhis, originating from an area around the Indus River, in what is now modern southeast Pakistan. On our home altar, familiar Hindu idols — Lakshmi, Ganesh, Krishna — share space with images of the 10 Sikh gurus and Jhulelal. Jhulelal, a river deity, is not only the patron saint of Hindu Sindhis, but is also revered by Sufi Muslims. For many, my religion is an outlandish concoction of incompatible faiths. But one thing that brings it all together is our traditional foods.

My grandparents left newly formed Pakistan in 1947, after the Partition of British India, in one of the largest mass migrations in human history. They settled in refugee camps in Gujarat and Uttar Pradesh before migrating to Pune, an Indian city with a large Sindhi diaspora and where my parents were born.

In independent India, my family felt spiritually alienated, because their practices were viewed as not "truly Hindu" by their new neighbors. As communities in exile often do, Sindhi Hindus formed tight-knit, transnational networks, and these practices, as well as language and food, became a vital connection to their roots.

After immigrating to the United States, my parents steadfastly held onto their "Sindhi-ness." The Hindu Sindhi diaspora in the U.S. is small; according to the Census Bureau, fewer than 10,000 people of any and all faiths speak Sindhi. As a child, I was shuttled to Sindhi camps and conventions, spoken to only in Sindhi, and served unusual Sindhi dishes.

A Longing For Lentils, Or How I Learned To Find Home Where The Daal Is

Once a year, we went to Ved Mandir, a run-down, drafty temple in central New Jersey to celebrate Cheti Chand, the Sindhi New Year and a celebration of the birth of Jhulelal. There, my aunties and uncles sang passionate devotional songs in praise of Jhulelal, and danced the ecstatic chhej (a Sindhi folk dance).

As I got older, I categorically rejected all these trappings of my subculture. It was much easier to be a "mainstream" Indian and to assume more conventional Hindu practices. But now that I'm an adult — and a parent — I'm reclaiming all the quirky bits of my culture and faith.

Jhulelal is known by various names and worshiped in many forms; his shrine in Pakistan receives both Hindu and Muslim pilgrims. But this white-bearded saint who sits on fish and whose image is found in nearly all Sindhi homes was originally a marginal deity for a particular group of Sindhis who prayed to the Indus River, according to Steven Ramey, associate professor in the Department of Religious Studies at the University of Alabama and author of Hindu, Sufi or Sikh: Contested Practices and Identifications of Sindhi Hindus in India and Beyond.

After Partition, however, the singer Ram Panjwani, known as a cultural ambassador of the Sindhi community, recast Jhulelal into a Sindhi icon. "Panjwani] consciously popularized Jhulelal as a Hindu Sindhi deity," says Ramey. Panjwani set Muslim and Hindu spirituals about the glory of Jhulelal to music. These hymns were then published and distributed among the diaspora.

There are many rituals associated with the holiday Cheti Chand, which falls on March 29 this year, but two continue to hold both nostalgia and meaning for me: pallao payan, when devotees hold their garment hems, or the ends of their mother's sari, as I once did, to pray to Jhulelal, and the consumption of tahri or sweet rice, during langar, the communal meal at the end of the celebration.

During langar, we sit cross-legged on the floor while volunteers scoop heaps of this sticky, aromatic rice onto our plates. Tahri is complex in flavor. Its varying ingredients — sugar or jaggery, fennel seeds, cardamom, and caraway seeds — give it a sweet, bitter, peppery and earthy taste. Its perfume is sharp and slightly aggressive.

Because of Sindh's location on the Silk Road, its cuisine has been influenced influenced by Persian, Arab and central Asian cooking. The Mughal Empire's Muslim rulers' decadent staples, such as saffron and pistachios for example, are showcased in tahri. During langar, tahri was often served with sai bhaji, a green, leafy vegetable and lentil stew, or bhee aloo, lotus stem and potato curry, both considered comfort foods for this uprooted population.

A spoonful of tahri instantly transports me to the Cheti Chand functions of my childhood — of family members chanting, "Jeko chawundo Jhulelal, tehnija theenda bera paar (Whomever calls the name of Jhulelal, their ship will safely reach the shore)," while greeting each other on that special day.

This week, I'll be cooking bowlfuls for my daughter, who has a sweet tooth. She, too, may turn away from all of this one day. But I'm doing my best to hold onto that which has survived through war, migration and globalization, just as my own parents and grandparents did. 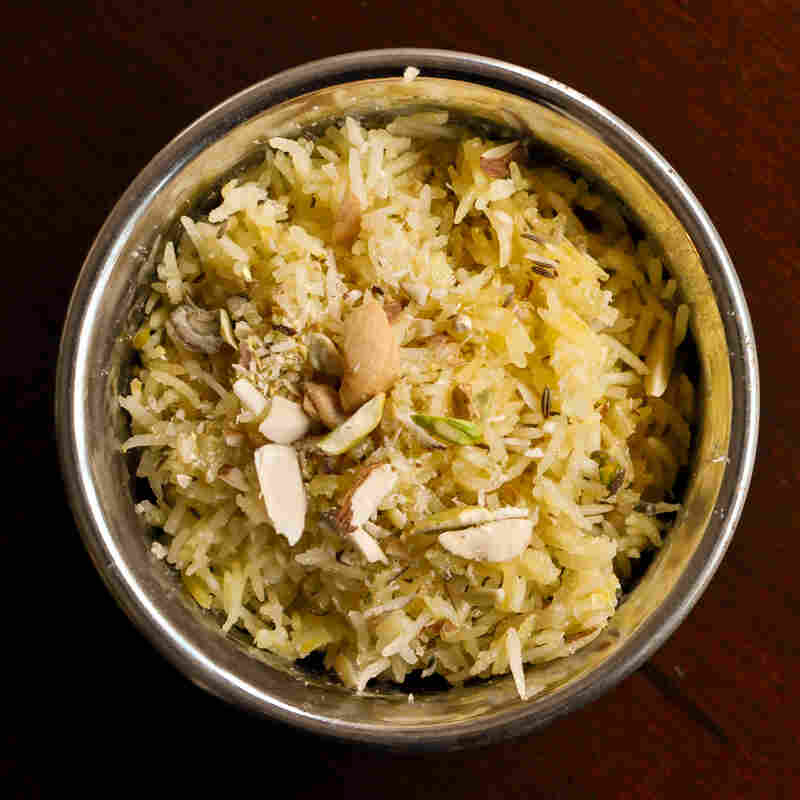 The author's tahri, from a family recipe Pooja Makhijani for NPR hide caption 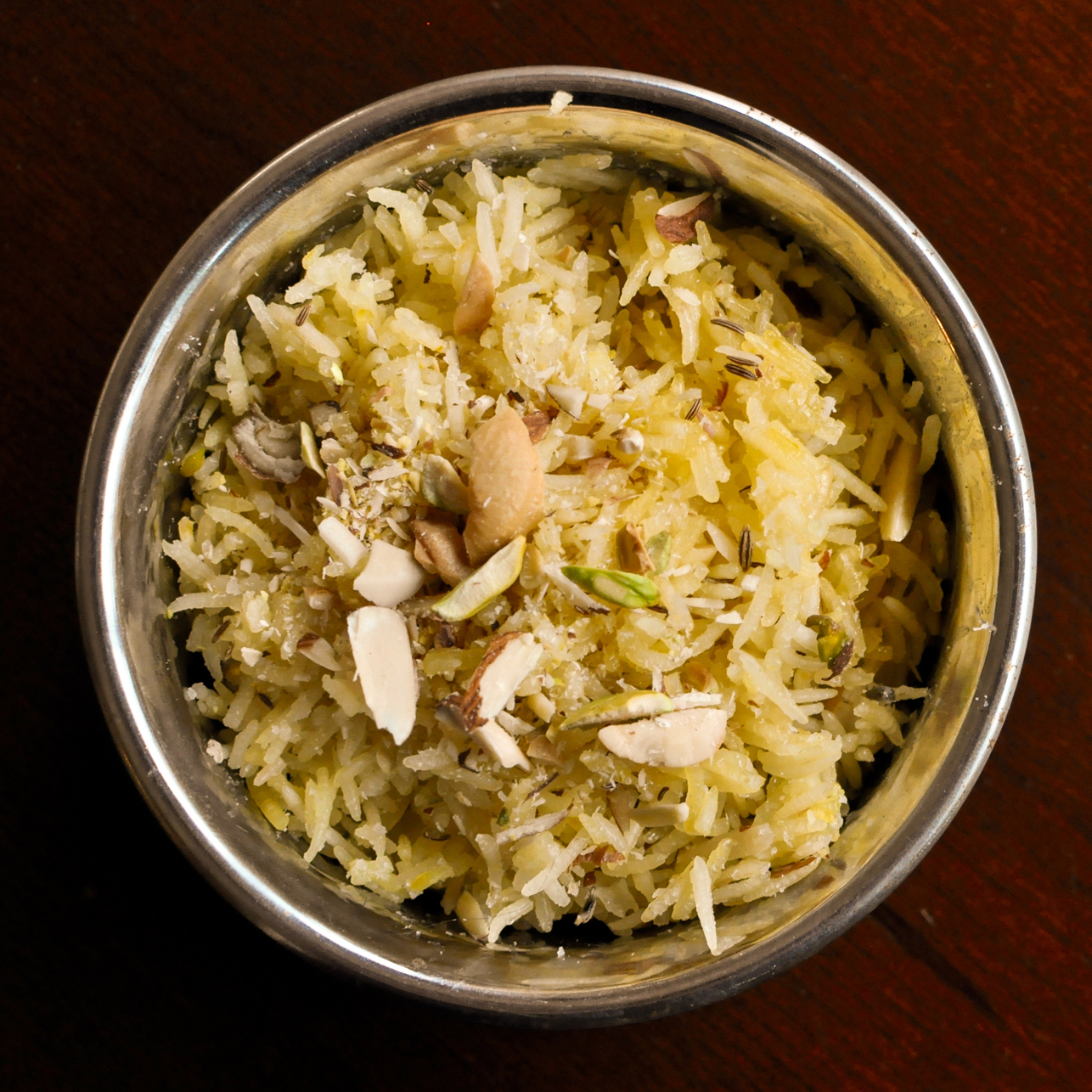 The author's tahri, from a family recipe

This family recipe comes to us from the author.