Accessibility links
EPA Decides Not To Ban A Pesticide, Despite Its Own Evidence Of Risk : The Salt New EPA administrator Scott Pruitt has decided not to ban chlorpyrifos, a pesticide widely used on produce. That's despite evidence previously compiled by EPA showing it could pose risks to consumers. 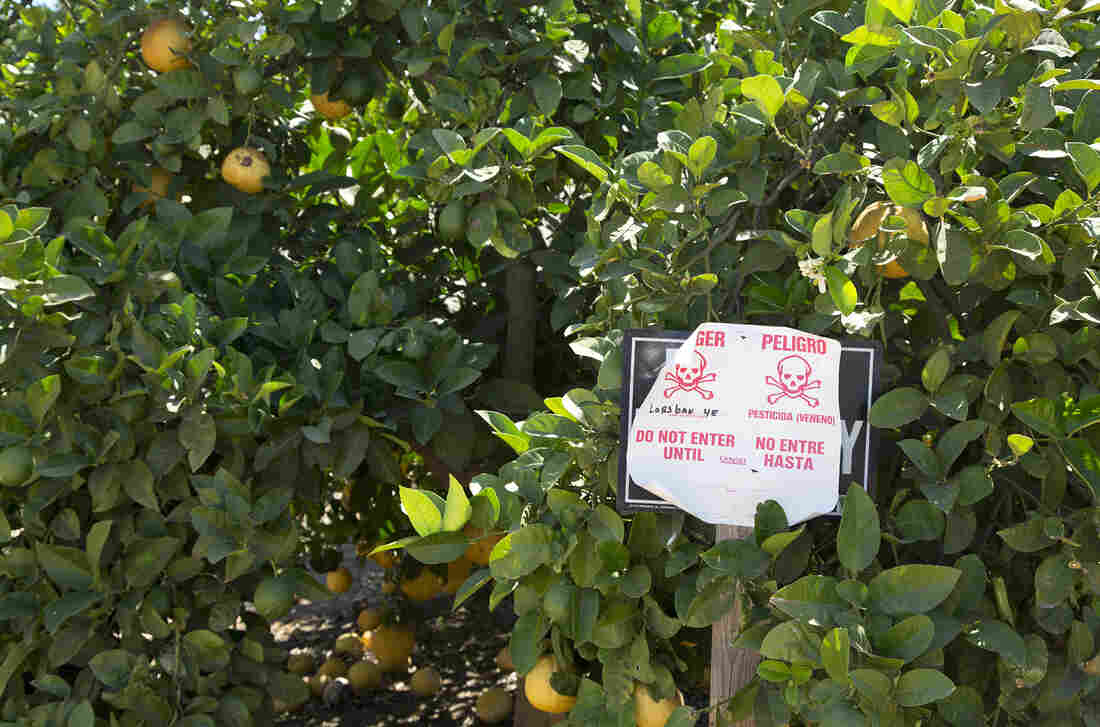 Pesticide warning sign in an orange grove. The sign, in English and Spanish, warns that the pesticide chlorpyrifos, or Lorsban, has been applied to these orange trees. Jim West/Science Source hide caption 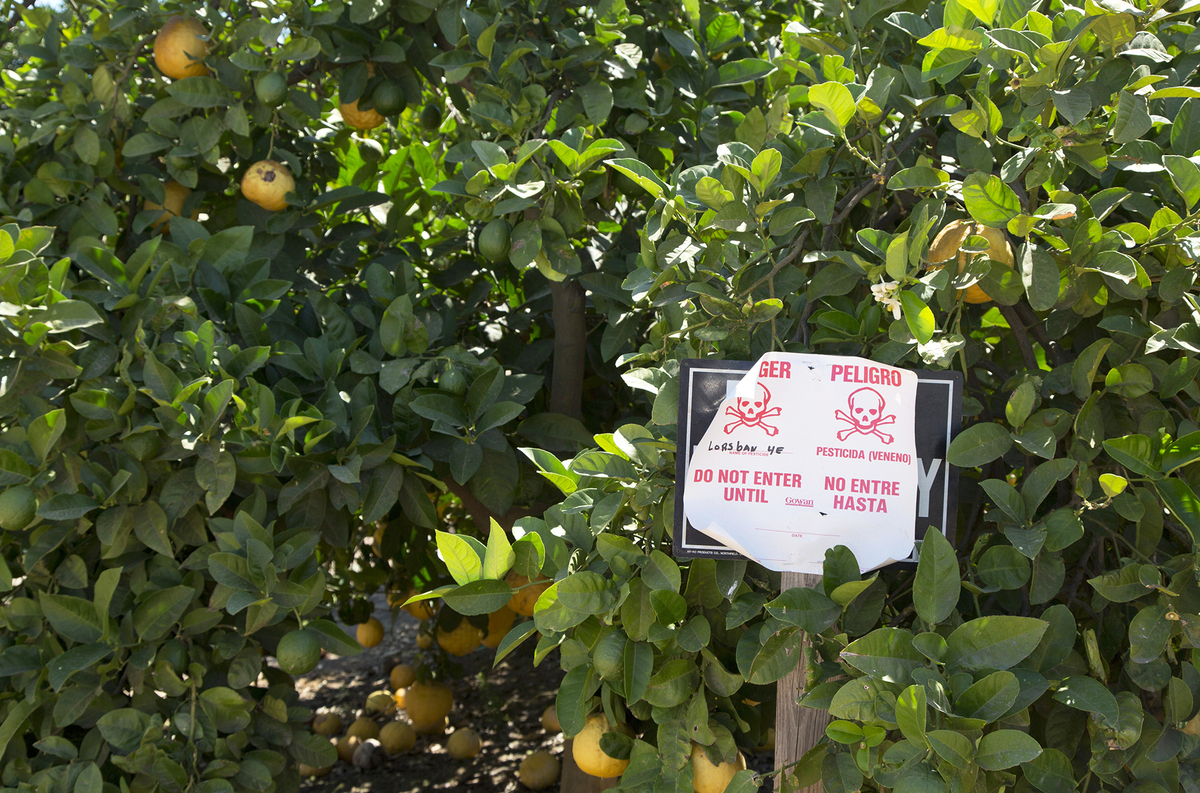 Pesticide warning sign in an orange grove. The sign, in English and Spanish, warns that the pesticide chlorpyrifos, or Lorsban, has been applied to these orange trees.

Update 7:06 P.M. Eastern: The EPA says it's reversing course and keeping chlorpyrifos on the market.

That's despite the agency's earlier conclusion, reached during the Obama administration, that this pesticide could pose risks to consumers. It's a signal that toxic chemicals will face less restrictive regulation by the Trump administration.

In its decision, the EPA didn't exactly repudiate its earlier scientific findings. But the agency did say that there's still a lot of scientific uncertainty about the risks of chlorpyrifos, and it said that because of that uncertainty, the court had no right to set a firm deadline for a decision. A federal court had ordered the EPA to decide by midnight on Friday whether to ban chlorpyrifos. The Obama administration proposed this ban back in 2015.

The EPA says it will keep studying the chemical.

Patti Goldman, from the environmental group Earth Justice, calls the decision "unconscionable," and says that her group will fight it in court.

New EPA Administrator Scott Pruitt made his reputation opposing the agency's regulations, and many farm organizations expected him to renounce the proposed ban. But doing so would mean disregarding a substantial pile of scientific evidence that his agency has assembled on the risks of this chemical.

Farmers have been using chlorpyrifos since 1965. Most of them know it by its trade name, Lorsban. When Wesley Spurlock, a farmer in the panhandle of Texas, sees worms on his corn or aphids on his wheat, this is the chemical that he typically loads into his sprayer.

"This chemical doesn't scare us at all," he says.

He does wear special clothing to protect himself, though. Because this chemical attacks the nervous systems of insects and people. It can cause dizziness, vomiting and diarrhea. So he's careful when handling it. "You don't spill any of it. It goes into the sprayer, we don't splash it around and make a mess," he says.

If he's spraying near the house, he might tell the kids to say inside until the job is done. "By doing all this, it's a safe product," he says. "It's doing it's job and it's doing it well."

Fruit and vegetable farmers use this chemical on citrus trees, strawberries, broccoli and cauliflower. This can leave residues on those foods in the supermarket. Several environmental advocacy groups have gone to court to force the EPA to ban the use of chlorpyrifos by farmers because of the risks that the chemical poses to consumers and to people who live near fields where it's used.

"Based on the harm that this pesticide causes, the EPA cannot, consistent with the law, allow it in our food," says Patti Goldman, an attorney with the environmental advocacy group Earthjustice.

More than a decade ago, the EPA banned the spraying of chlorpyrifos indoors to get rid of household bugs.

At that time, though, the EPA thought that use on the farm posed little risk. The agency was relying on scientific studies that directly measured the immediate effect of chlorpyrifos on the nervous system. Residues on food weren't nearly enough to keep nerves from working normally.

But then new evidence surfaced. Jim Jones, who was assistant administrator of the EPA and responsible for pesticide regulation before he left the agency in January, says the new evidence came from studies in which scientists followed hundreds of mothers and their newborn children, monitoring their exposure to lots of chemicals. One of these studies, by researchers at Columbia University, measured the levels of chlorpyrifos in blood taken from umbilical cords when babies were born.

While the study was going on, the ban on indoor uses of chlorpyrifos came into effect. So over the course of those years, scientists were able to gather data on children who had been exposed to very different levels of the pesticide.

The studies suggested that this chemical was more dangerous than people had previously realized.

Jones says the EPA struggled to translate the findings of these studies into a prediction of risk from chlorpyrifos residues on food. For one thing, the agency had to come up with an estimate of how much chlorpyrifos the women had been exposed to, based on levels of chlorpyrifos in their blood.

"But once we cracked that nut, and you had the risk evaluated and in front of you, it became, in my view, a very straightforward decision, with not a lot of ambiguity in terms of what you would do," he says.

The law on pesticides is very strict: It requires "a reasonable certainty that no harm will result" to consumers or people living in the areas where pesticides are applied.

In 2015, the EPA proposed a ban on chlorpyrifos.

Dow Agrosciences, the company that sells chlorpyrifos, insists that a ban is unjustified.

Jim Aidala, a former pesticide regulator at the EPA who now works as a consultant to Dow, says that many scientists — including those on a committee that the EPA asked to look at this question — aren't convinced by the scientific methods the EPA used. "There's a lot of controversy about this," he says.

But the EPA is facing a deadline, because of legal challenges from environmental groups, including Earthjustice, which have submitted a petition that the EPA ban chlorpyrifos. A federal judge ordered the agency to make a final decision on this petition by March 31.

"I'm waiting with bated breath for Friday, to see what they're going to go," Jones says. "I just don't know what basis they would have to deny the petition [to ban the chemical], given the vast scientific record that the EPA's got right now."