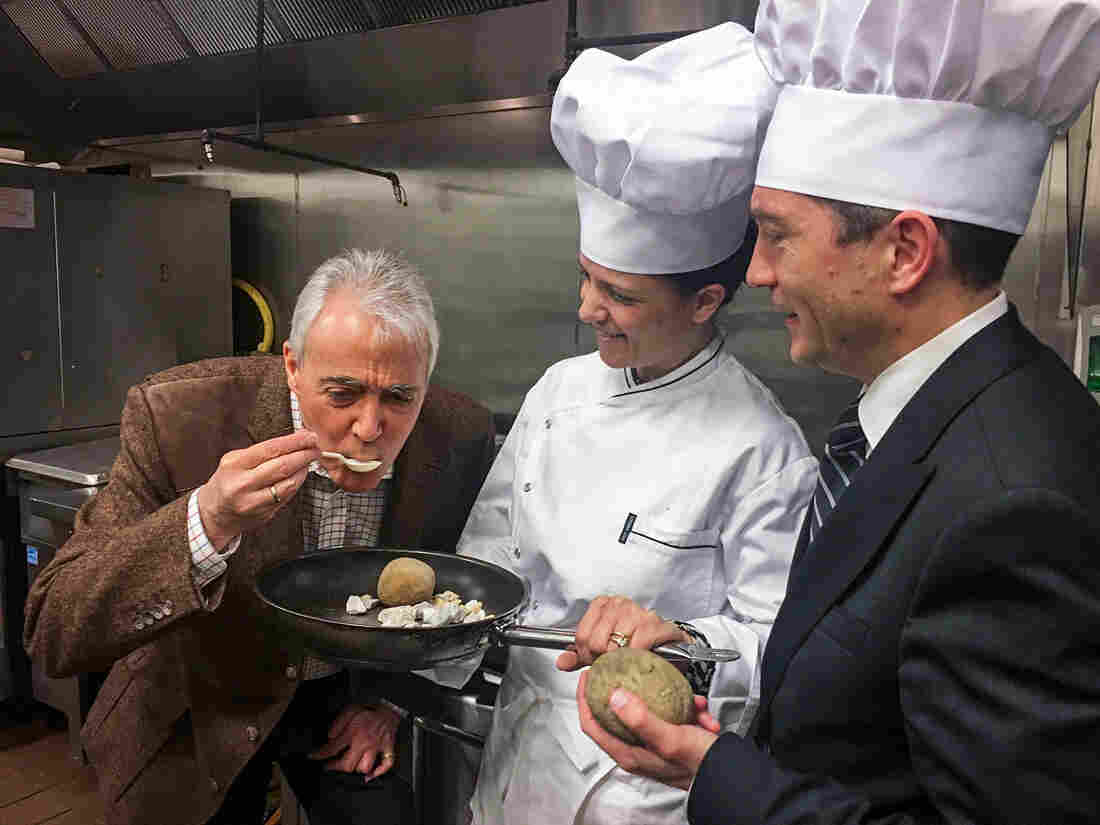 Chef Solange Gregoire and her husband, Chef Gael Gregoire, are the creators of what they call veritable cuisine du terroir: not just food of the land, but food of the land really. Ian Stewart/NPR hide caption 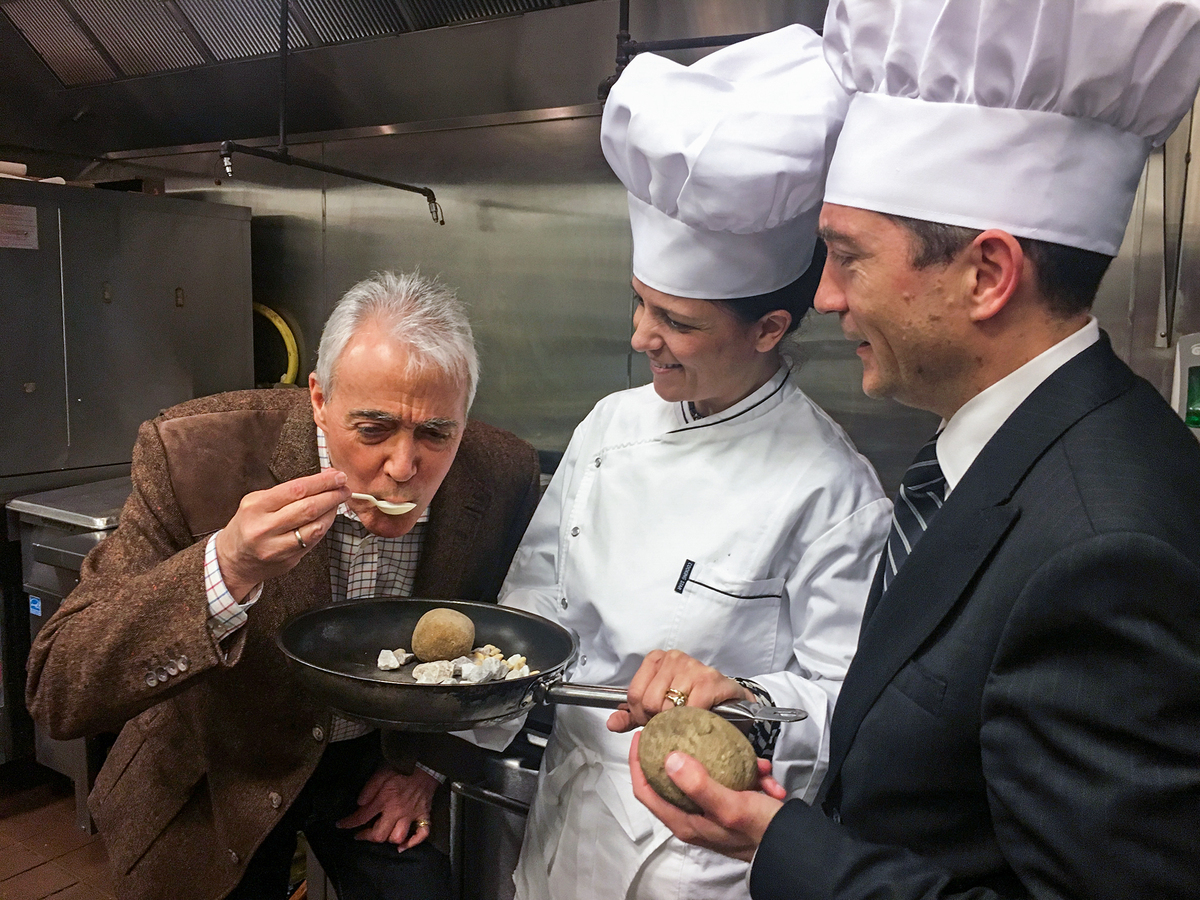 Editor's note on March 27, 2018: You may have figured this out already — this story was an April Fools' joke. It's not real. We hope you enjoyed it.

What's the next big foodie enthusiasm? Robust flavors, earthy scents and lusty textures from the very soil that nourishes life.

It's called Veritable Cuisine du Terroir — literally, Food from the Earth Really — and in their copper-clad kitchen in the Marais district of Paris, chefs Solange and Gael Gregoire run one of the hottest bistros in a city long celebrated for its culinary prowess.

Their restaurant, Le Plat Sal — which translates to The Dirty Plate — prepares four-star signature dishes, like Roche Dans la Croute, a rock from Mont Lachat folded into a pastry crust, and Boue Ragout, a stew simmered from the mud of the Seine River, washed down with a surprisingly delicate vintage of Du Vin d'Egout, a smoky gray wine distilled from Paris sewer water.

"The rich earth, so alive with vitamins and minerals," Chef Solange Gregoire told Scott Simon, host of Weekend Edition Saturday, and "the mud of the earth that caresses our toes, the sand kissed by the sun, and rocks."

She lifted the top of a copper pot and asked, "It smells good, yes?"

"Very," Simon had to admit, despite the unconventional ingredients.

This may sound, like foie gras and escargot, to be a distinctly French cuisine. But Ted Allen, who hosts Chopped on the Food Network, believes that dirt, rocks and mud will soon become common in American gourmet cooking, too.

And great American chefs are developing their own classic takes. That includes James Beard winner Rick Bayless, the Chicago chef renowned for his Mexican cuisine. Bayless says that the Tzolkin, or Maya Divine Calendar, that was supposed to predict the end of the world in 2012, was off because "bits of the Tzolkin had been chiseled off to toss into a stew, named after Zipacna, the Maya god of the earth's crust. We make a version in our restaurants, with chunks from Wrigley Field. It's delicious," he adds.

And Danny Meyer, the New York restaurateur and author who founded The Shake Shack, is quietly beginning his own new national chain called Rock in Roll.

Meyer is opening the chain's first two restaurants this fall, near his hometown of St. Louis, with rocks and dirt locally sourced from Laddonia and Cabool, Mo.

"Does dirt from Laddonia have its own distinct flavor?" Simon asked. 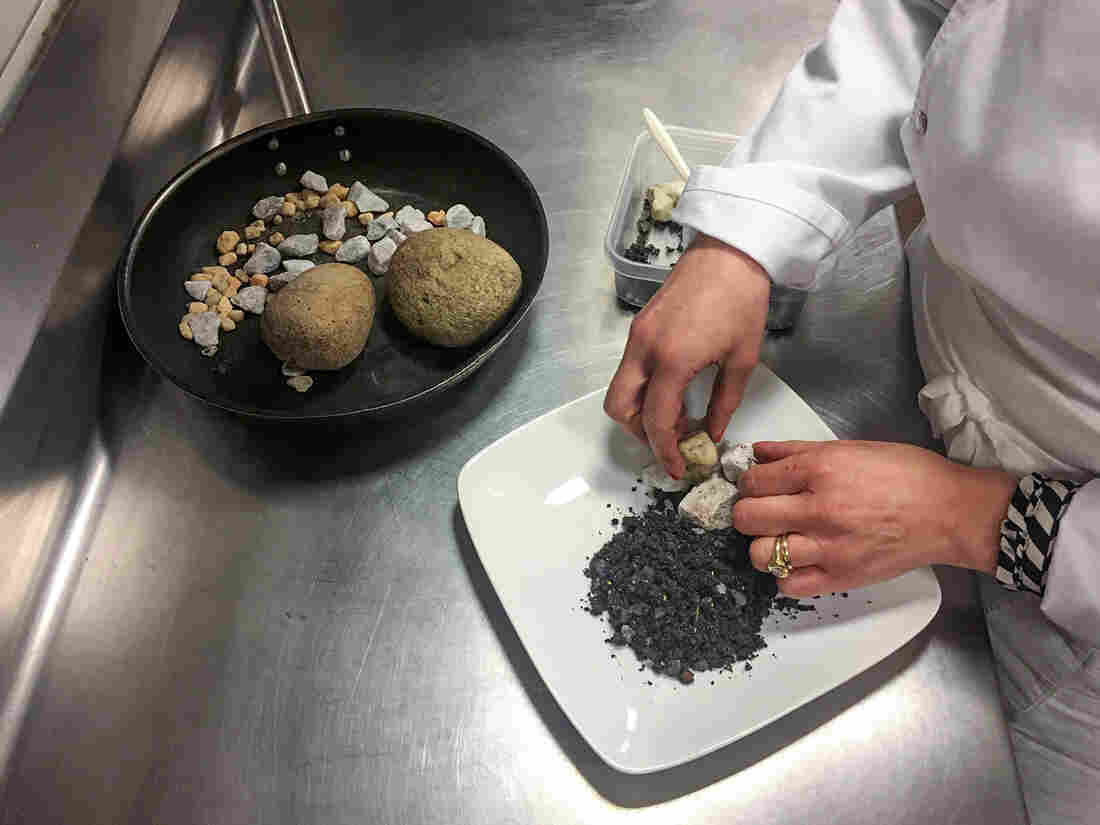 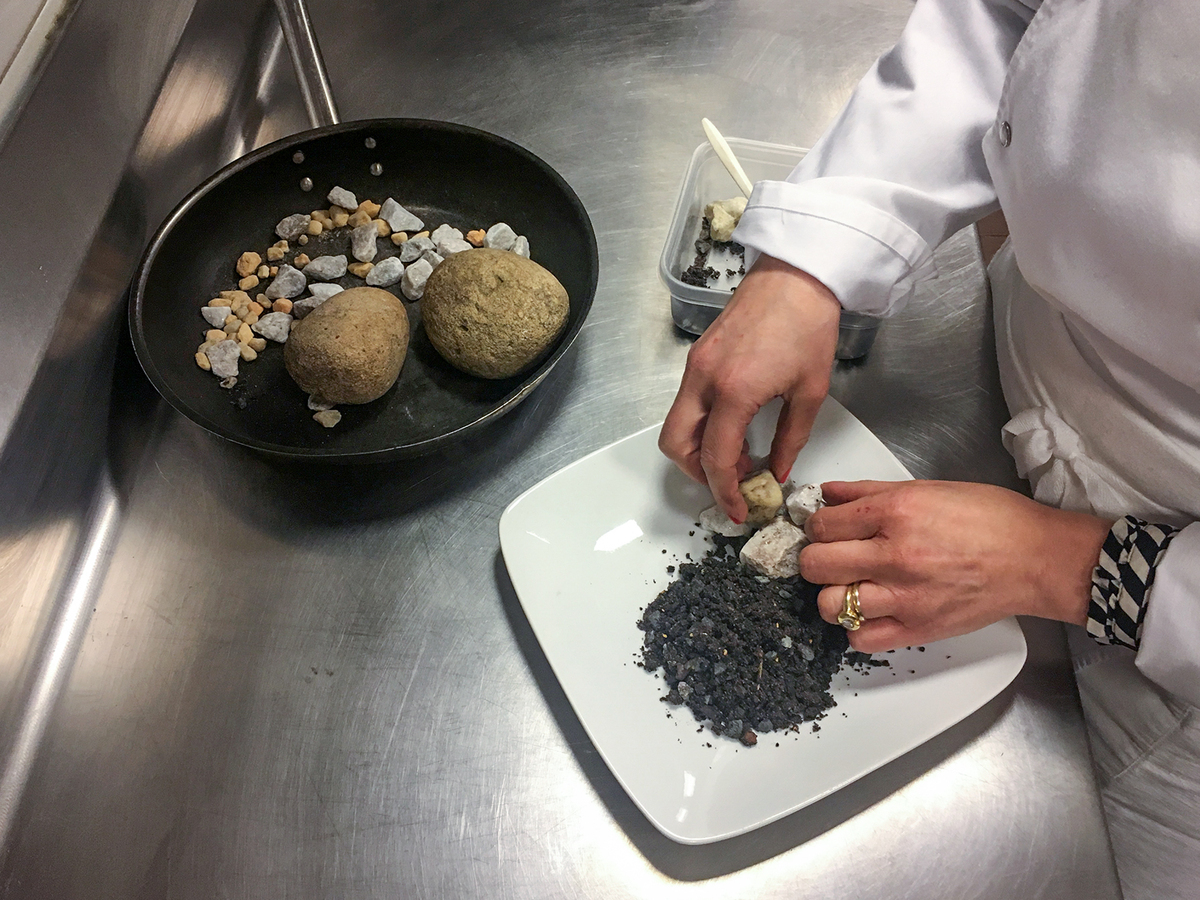 "It has its own piquancy," said Meyer, whereas "Cabool dirt is opulent, but silky."

Scott found two English-speaking patrons at Le Plat Sal, and asked how they could eat rocks and dirt and drink wine distilled from sewer water.

Olivier Blanchard, a French economist, said, "You Americans want everything to be so safe, with your seatbelts and No Smoking and speed limits and vegan cupcakes and condoms and money-back guarantees." His wife, Noelle Blanchard, added, "How can you enjoy life when you are so scared?"

Chef Gael Gregoire says "only Americans ask this question." He adds, "What would you rather eat? A French rock or an American Twinkie?"

The Gregoires prepared a dish called Doux Lorraine, a dulcet, mossy-colored stew made of mud from a river drainage basin.

"It's a favorite on our bar mitzvah menus," says Gael, who then lifts the lid on a consommé with a rich, rusty color that's called Ile de Cite, after the island that forms the middle of Paris. Key ingredients, in the city in which so many Parisians sit in cafes with their beloved dogs on their laps, are nuggets of dog ordure — which typically spendthrift Americans just bag and throw away.

"We recognize those droppings for the precious saveur" — literally, flavor — "that they are," says Gael.

And although in the audio of this story, airing on Weekend Edition Saturday on April 1, you can hear Scott Simon cough in alarm when he realizes what he has ingested, Scott reports that now that he's back home, he has learned from the kitchen mastery of the Gregoires. Daisy, the Simon family's French poodle, is now an important contributor to their meals.

"The Gregoires were so right," says Scott. "So much saveur, just going to waste. And now Daisy feels more a part of our family than ever to know what a gift she gives to our culinary enjoyment!"

Saute 2 bulbs of garlic and ½ cup scallions in olive oil, until browned

Stir in 4 bulbs of fennel coarsely chopped with stalks

Simmer for 20 minutes over medium heat

Garnish with small twigs fallen from trees along Champs-Elysees

But under no circumstances should anyone eat this dish!