Accessibility links
Bone Broth-Loving Hipsters Are Pushing Up The Price Of Bones : The Salt With bone broth mania sweeping parts of the U.S. (we see you, LA), cheap bones are harder to come by. Some broth makers are moving away from the standard beef and chicken to new bones — like alpaca. 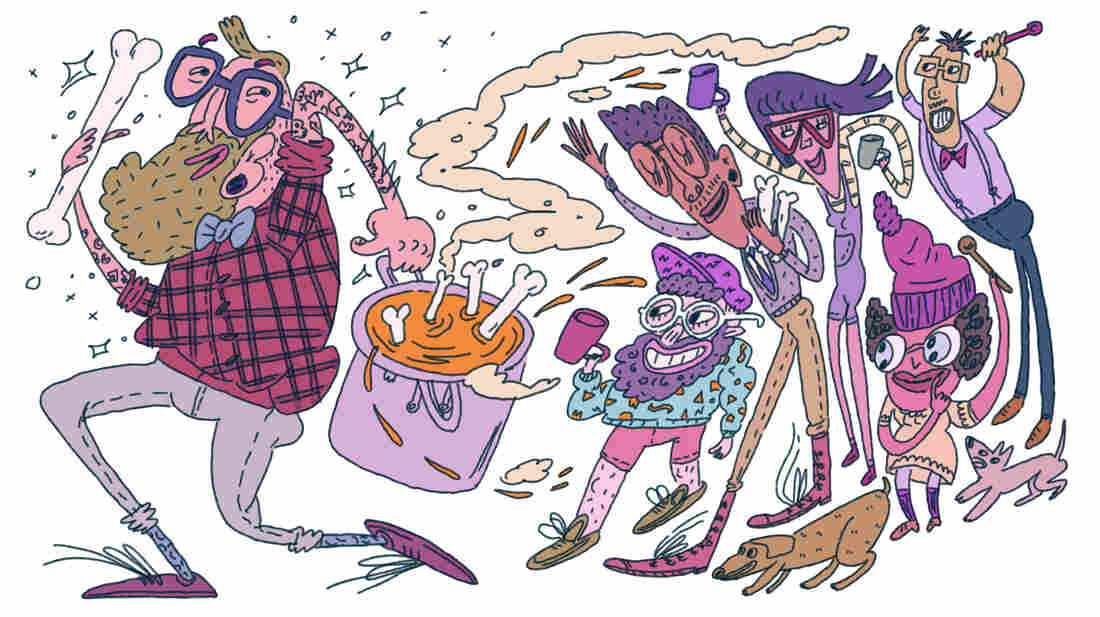 Bone broth has become so popular these days that the bones used to make it are getting harder — and more expensive — for broth retailers to source. Alex Reynolds/NPR hide caption 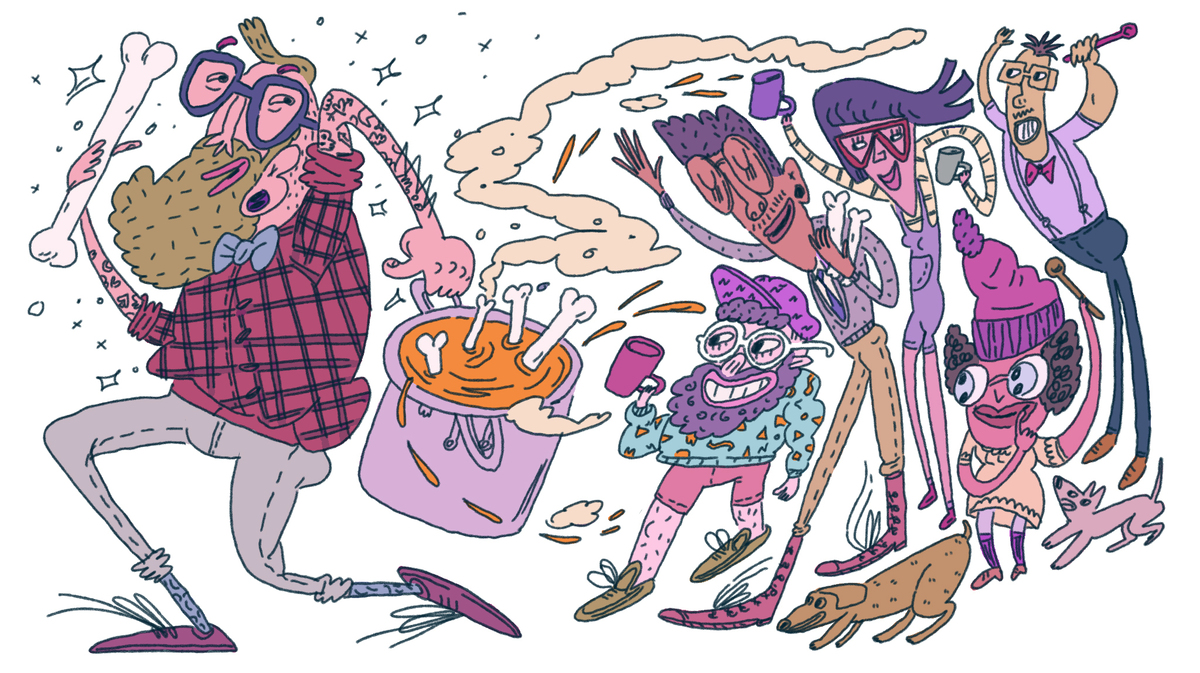 Bone broth has become so popular these days that the bones used to make it are getting harder — and more expensive — for broth retailers to source.

Dear dogs of America — sorry about bone broth. Since this well-marketed take on an ancient beverage started sweeping hip enclaves like New York, Austin and Los Angeles a few years ago, it's getting harder to find cheap bones. Unlike many food fads, bone broth seems to be here for the long simmer. As more people switch to sipping, there are fewer bones to go around.

Bone broth is commonly confused with broth (the quick-cooked mix of meat, bones and aromatics used to make chicken soup) and stock (a similar but more bone-heavy mixture that's often cooked for 4 to 6 hours to extract collagen from the bones), though it's closer to the latter. Many bone broth recipes say to simmer the mixture for anywhere from 14 to 48 hours, depending both on the type of bones and the patience of the cook.

Meat broths have been touted for their restorative properties for centuries. In the 1800s, chemist Justus von Liebig began working on a meat-based food to feed Europe's poor — a reduction of meat and bones that he claimed could address "all cases of weakness and digestive disorder." By the 1860s, a London hospital was using 12,000 pots of beef "tea" every year to feed their patients.

At more than $12 per quart at many stores, bone broth is no longer a food for the poor. Its healthful properties (and familiarity) have made it the elixir du jour. And it's a relatively easy sell in a time when even Wal-Mart carries organic products and foods filled with the antioxidant of the month. Yet until recently, bone broth — even made from grass-fed meats — was relatively inexpensive to produce due to the low price of bones. That's not the case any longer.

Tressa Yellig, who started Portland, Ore., broth company Salt, Fire & Time in 2009 (and now runs Broth Bar with her sister Katie Yellig), has noticed a spike in prices over the past few years. The company only sources from local farms that meet specific environmental and humane standards, which leaves a short list of farms to partner with.

"Trying to get enough bones is really hard," Yellig says. "You have to remember, [bones] were waste products that were going to dog food. Farmers were ecstatic if they could get anything for them." Today, a butcher in Seattle might be selling beef bones for $4 a pound retail when the Yelligs used to pay a farmer about $30 per case of bones – between 30 and 50 pounds.

Just three years ago, it wasn't worth it for Katherine Johnson of Virginia's Dragonfly Farms to get her bones back from the butcher. "They didn't sell," she explained. "They take up a lot of space and we have to pay to have them packaged." Then the calls started coming in. People and restaurants wanted bones. Now she's charging $2 per pound.

Jenni Harris of White Oak Pastures in Georgia is a fifth-generation rancher whose family has been raising cattle since 1866. Today, White Oak tries to make use of every part of its animals by selling tallow soaps, leather bags and even candles. They used to grind up unused bones to use on the farm as fertilizer.

So even Harris was surprised by the sudden demand for bones one winter a few years ago. "Our knuckle, marrow and soup bones stayed sold out," she said. Eventually she learned that her customers were making broths at home using the beef bones she sold. Since then, growth has been explosive, she says. "We hardly have any bones left over at the end of the week."

Despite the sourcing difficulties, the Yelligs have used the high price of beef and chicken bones (still the most popular meats to make broth from) to try to expand their customers' broth horizons. All of Salt, Fire & Time's broths are priced the same, but the margins for chicken and beef keep getting smaller. "No one wants to pay for broth the way they pay for steak," Yellig said.

Salt, Fire & Time also sells broths made from lamb, bison, pork, turkey and alpaca bones. But Tressa Yellig says many customers think the only way to make broth is with chicken. They often expect lamb or bison broth to taste gamey. "When we do conferences or events we don't take chicken for just that reason," Yellig said.

How will anyone know if they like alpaca broth if they never try it?