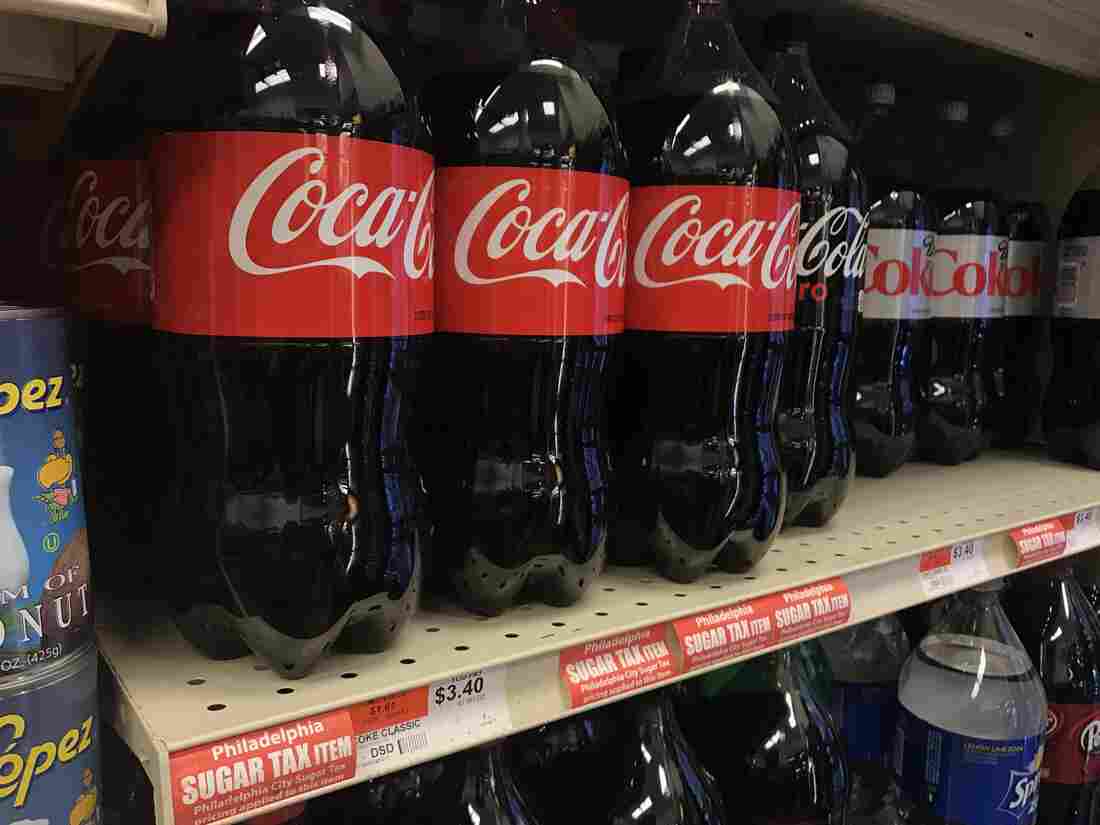 An appeals court hears arguments Wednesday on the future of Philly's landmark tax on sweetened drinks. The money is funding preschool for low-income kids, but the soda industry says it's losing jobs. Allison Aubrey/NPR hide caption 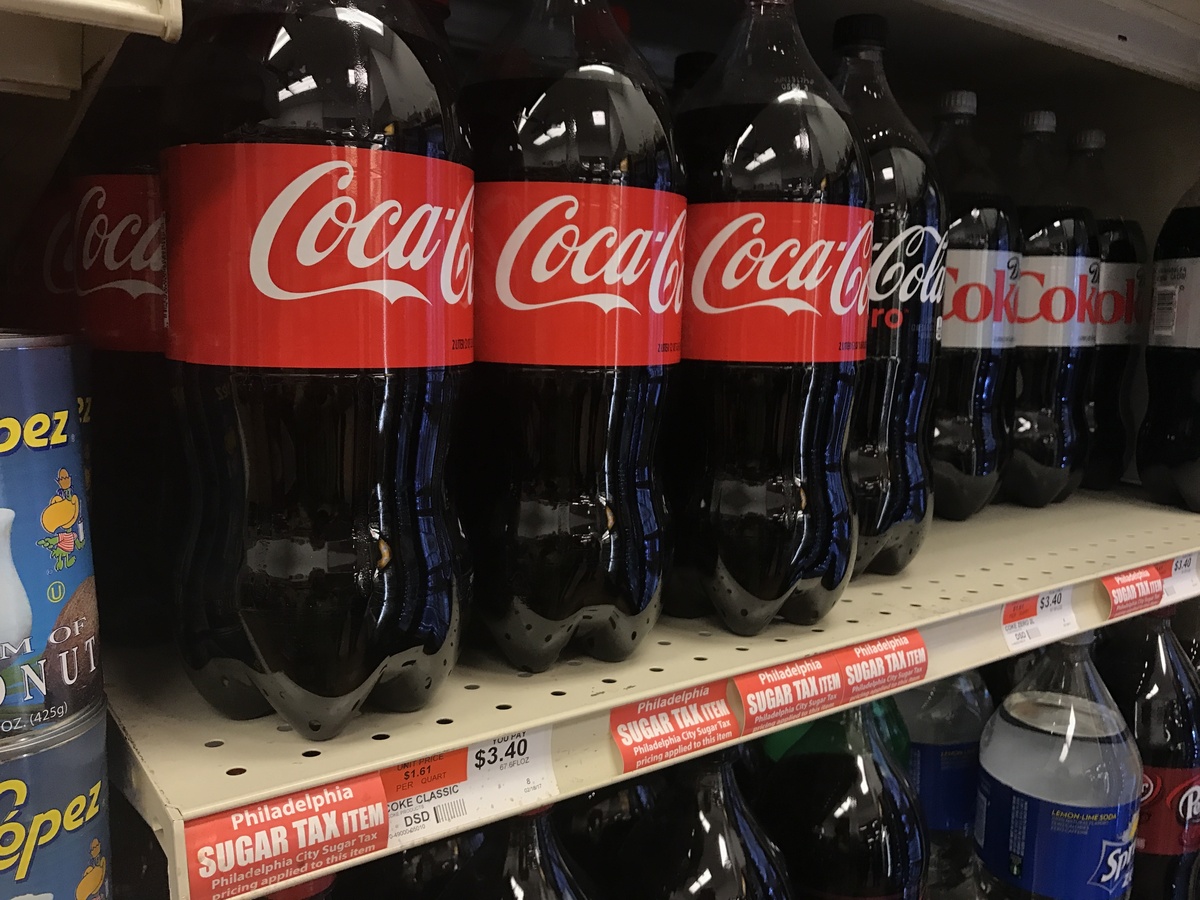 An appeals court hears arguments Wednesday on the future of Philly's landmark tax on sweetened drinks. The money is funding preschool for low-income kids, but the soda industry says it's losing jobs.

Philadelphia created a buzz last summer when its city council voted to impose a tax on sweetened drinks.

Three cities followed suit with similar measures. But the beverage industry has been fighting back.

On Wednesday, a panel of judges in a Pennsylvania appeals court is expected to hear oral arguments in a lawsuit brought by the beverage industry against the city.

The legal challenge has put the brakes on the city's planned expansion of programs that are funded by revenues from the tax. The mayor's office says the city will hold off on adding additional pre-K seats.

Currently, the revenue is funding 2,000 pre-K spots for low-income families in the city. But now, the city says it will not add an additional 1,000 seats as previously planned.

I visited Philadelphia to gauge how the tax has impacted businesses and people in the city. I walked a few city blocks with Larry Ceisler, a spokesperson for the Ax The Bev Tax coalition, which is funded by the industry. As we passed a small supermarket, he told me the tax is having a negative effect.

"What's happening is that business is down," Ceisler tells me. Some city dwellers are going to the suburbs to do their shopping, Ceisler says. They're not just leaving to buy drinks but other groceries too, he says.

"Overall, my business is down by 15 percent — an unsustainable drop in an industry with tight margins," Jeff Brown, who owns six ShopRite supermarkets in Philadelphia told us. "This tax has also forced me to cut thousands of hours each week from my union employees," Brown says.

Local beverage distributors say their sales are down significantly. Canada Dry Of Delaware Valley, which distributes a range of carbonated drinks, teas and bottled waters in Philadelphia says sales are down by about 45 percent. The company has laid off about 30 employees, including drivers and workers who stock the shelves. 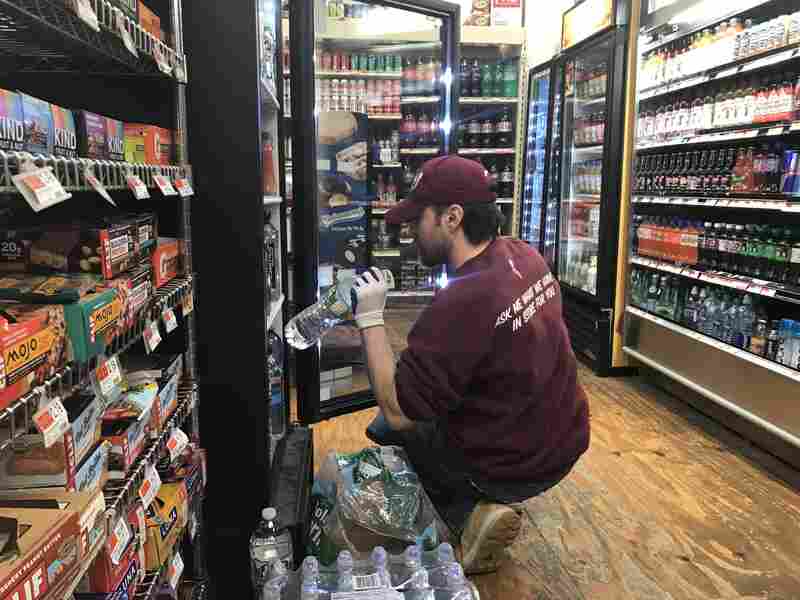 A worker restocks a cold soda display. Soda distributors in Philadelphia say sales are down and they have had to let employees go since the city's tax on sweetened drinks went into effect. Allison Aubrey/NPR hide caption 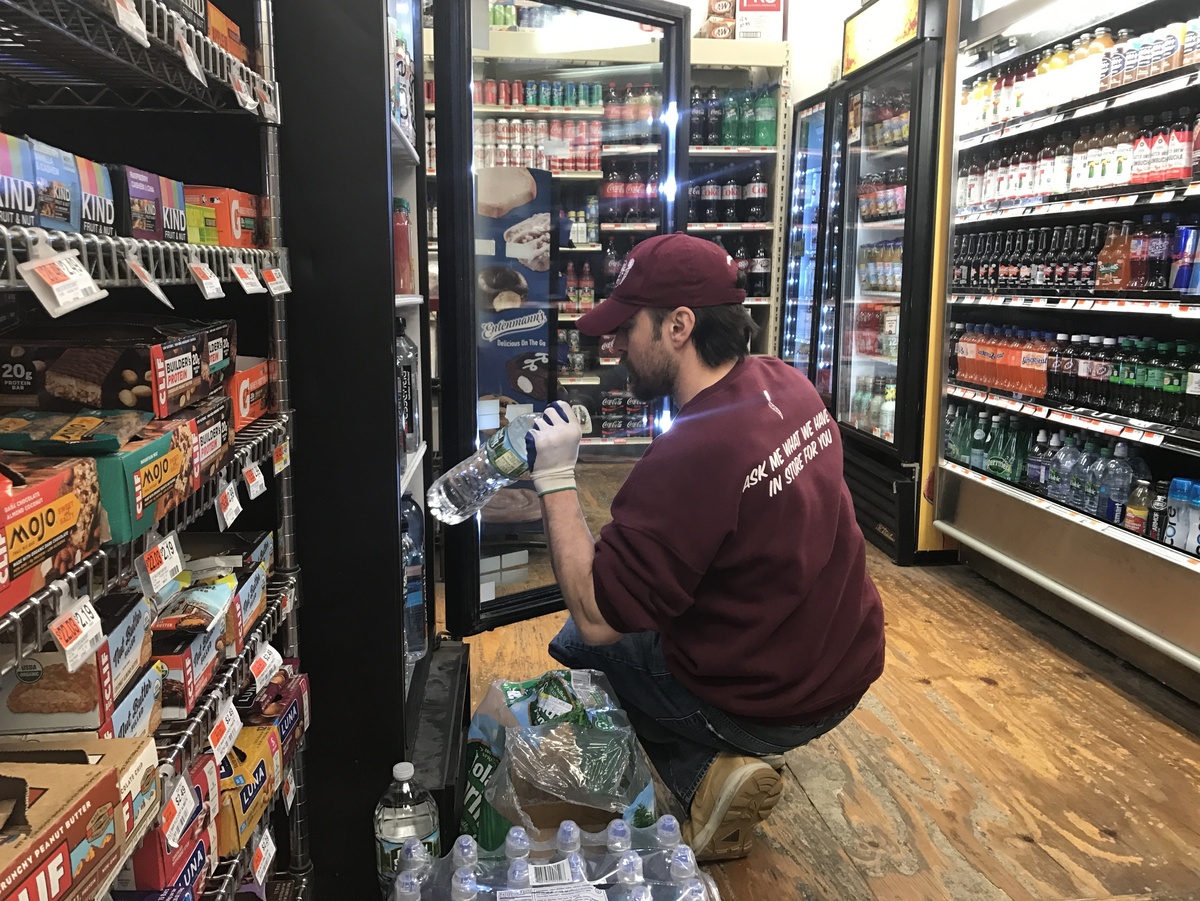 A worker restocks a cold soda display. Soda distributors in Philadelphia say sales are down and they have had to let employees go since the city's tax on sweetened drinks went into effect.

"It's obviously disappointing," Bob Brockway, president and COO of Canada Dry Delaware Valley told us. He says bottled water sales have grown, but not nearly enough to offset losses.

But there are people in the city benefiting from the soda tax, too.

The mayor's office says the city has brought in about $12.3 million in revenues from the first two months of tax collections. The tax is projected to bring in about $91 million over 12 months. The mayor's office says the Philly Beverage Tax will be used to "make much needed investments in pre-K and community schools, as well as in Philadelphia parks, rec centers and libraries."

I decided to check out Pee Week Prep Educational Center, one of the preschool programs that's expanded its pre-K enrollment due to revenue from the soda tax. It's located in West Philly, so I hopped in an Uber. Along the way we passed plenty of boarded up houses. "Yes, a lot, " the driver Al McLean commented."

More than 400,000 Philadelphians live below the federal poverty line, including 37 percent of all the kids in the city.

"A lot of the kids here are what I call couch-to-classroom," Stacy Phillips, the founder and CEO of Pee Wee Prep, told me. In other words, before they enrolled in school here, they were home watching TV on the couch. 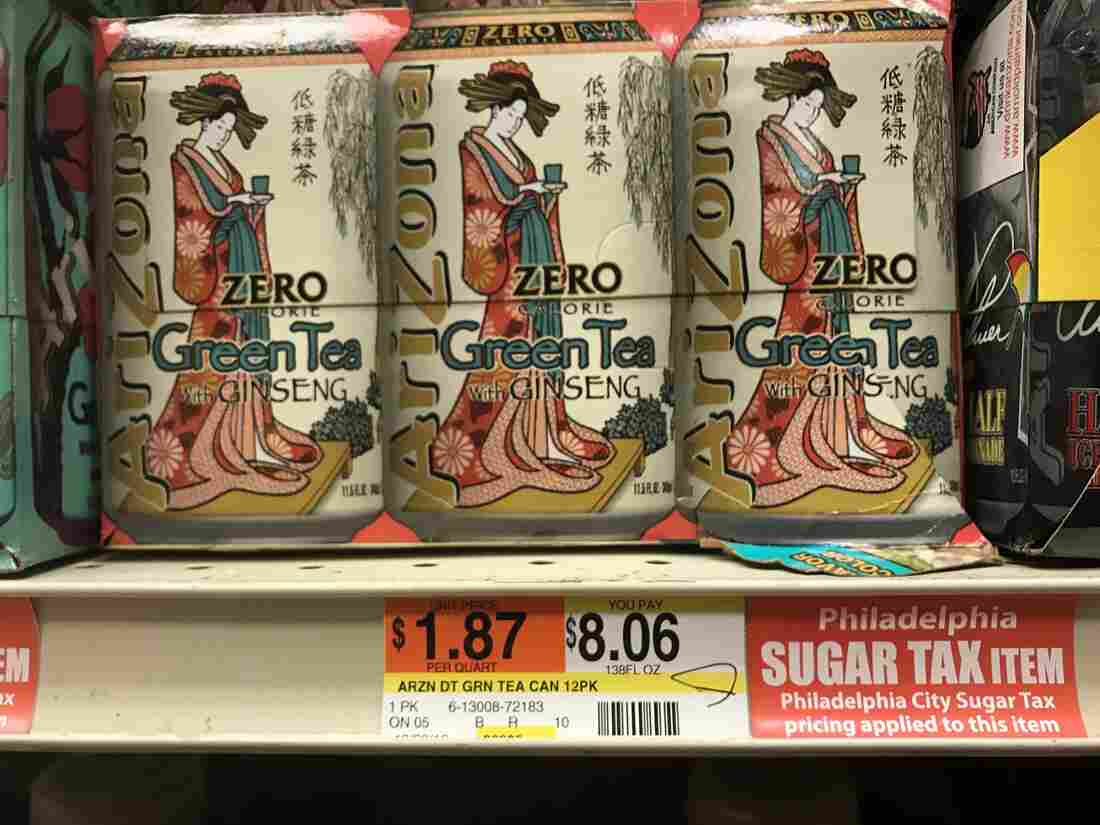 All sweetened drinks in Philadelphia are taxed, including those with artificial sweeteners. Allison Aubrey/NPR hide caption 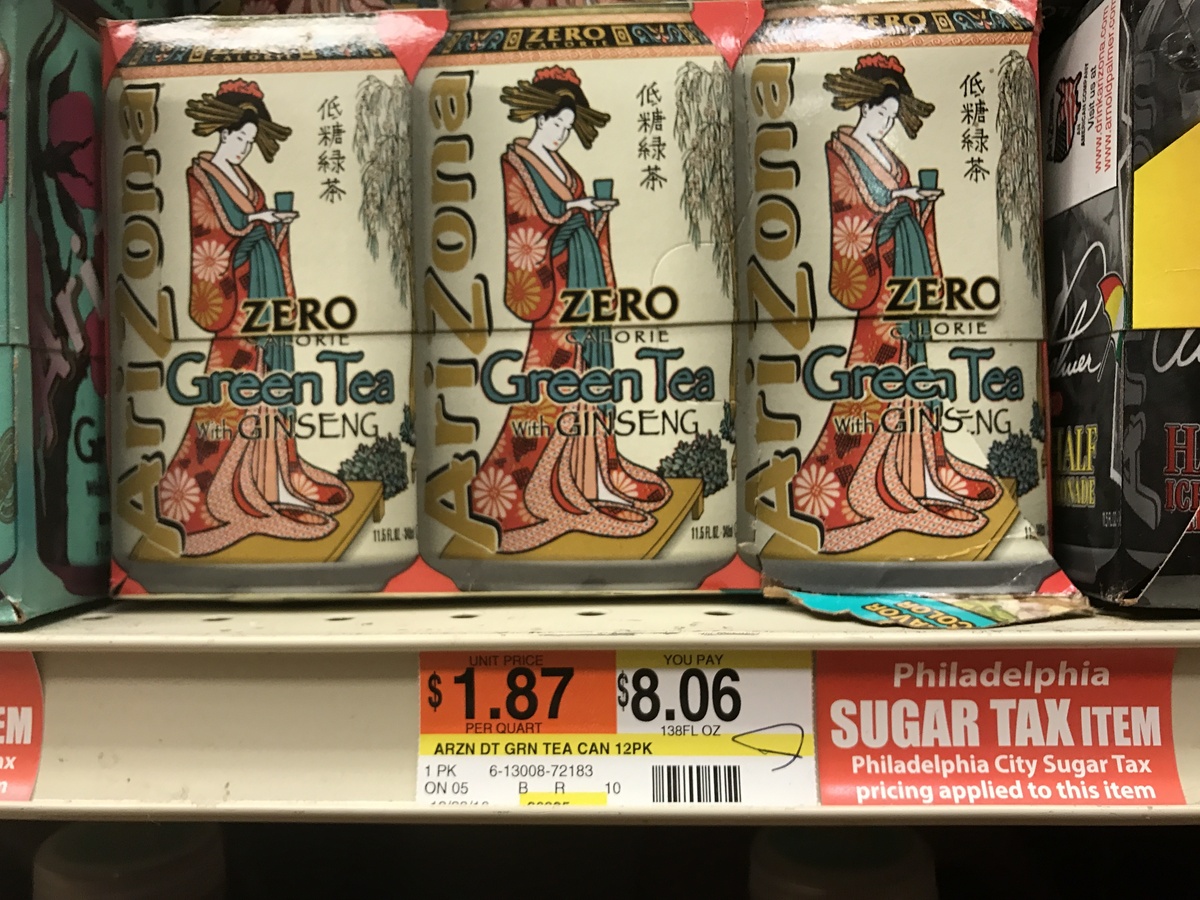 All sweetened drinks in Philadelphia are taxed, including those with artificial sweeteners.

Now, Phillips is offering a full-day curriculum. When I visited, kids were rotating through science centers. They were engaged in matching games, counting and P.E. classes.

Phillips has been able to add 90 children to her roster. "I'm thrilled, I'm happy about the soda tax," she tells me. She says investing in these children is the right thing to do.

Despite the funding of popular programs, the tax is controversial in the city. Last fall, a poll from The Pew Charitable Trusts, found 54 percent of residents endorsed the City Council's decision to impose a beverage tax. Forty-two percent did not endorse it. A more recent survey commissioned by the industry-funded Ax The Bev Tax coalition found a majority of residents (58 percent) oppose the tax.

Some residents I spoke to told me they love the idea of investing in children and expanding preschool education, but they think the city should find another way to pay for it.

"I live here, and I pay a significant portion of [my wages] to the city," Dan McFadden told me. I caught up with him during his lunch break. He says that in his opinion, the city doesn't need a separate tax on sugary drinks.

As the industry and the City of Philadelphia prepare to face off in court, the legal arguments are strictly economic. The hotly debated issue of whether a soda tax is a good way to help nudge people towards healthier behaviors is not part of the argument.

Still, many eyes are on Philly.

And many other public health advocates support the City in its legal battle to keep the beverage tax in place.

"The evidence is clear that sugary drinks are a major contributor to the increasing rates of type 2 diabetes and heart disease," reads a joint statement from the organizations.

"Philadelphia's tax on sugary drinks has the potential to change lives for the better – preventing chronic disease and extending quality of life by simply incentivizing families to choose health," the brief concludes.