Accessibility links
Bison Or Brian? From A Calorie Perspective, Cannibalism Didn't Pay For Paleo Humans : The Salt Archaeological records show ancient humans sometimes ate each other. A new study suggests that hunting and eating other humans cost too much effort to be a regular thing. So why'd they do it? 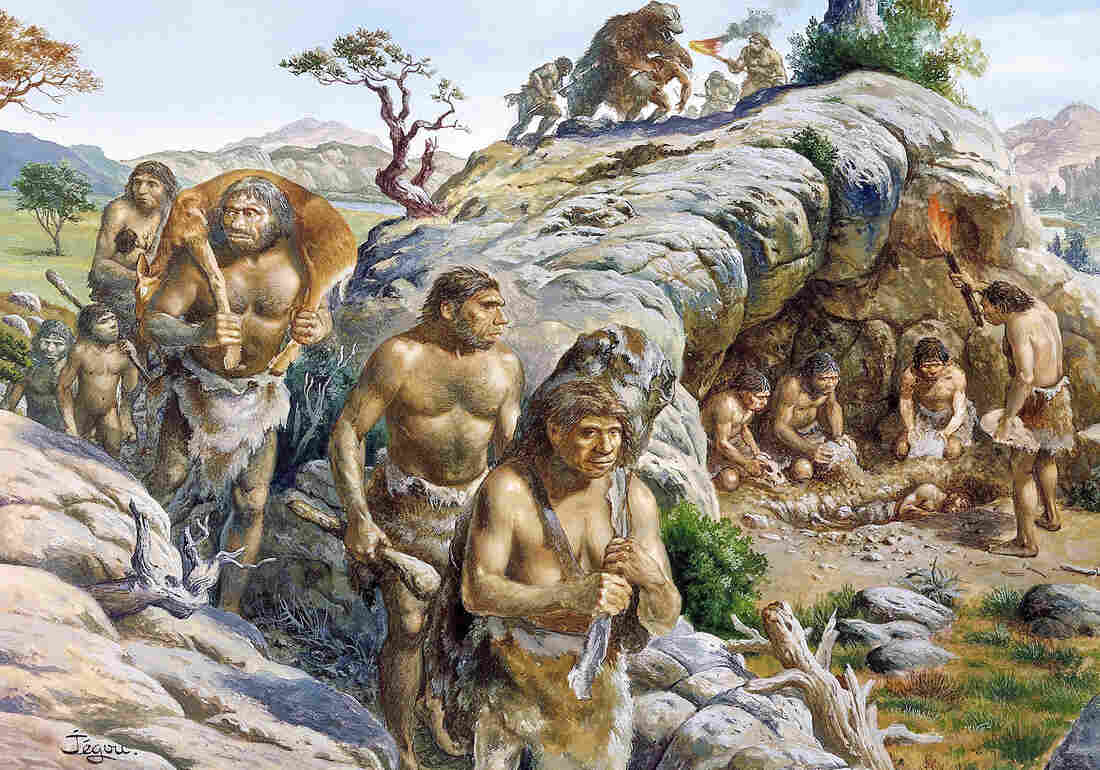 Archaeologists have suggested that Stone Age people sometimes ate one another for nutritional reasons. But a new study suggests that from a calorie perspective, hunting and eating other humans wasn't efficient. Publiphoto/Science Source hide caption 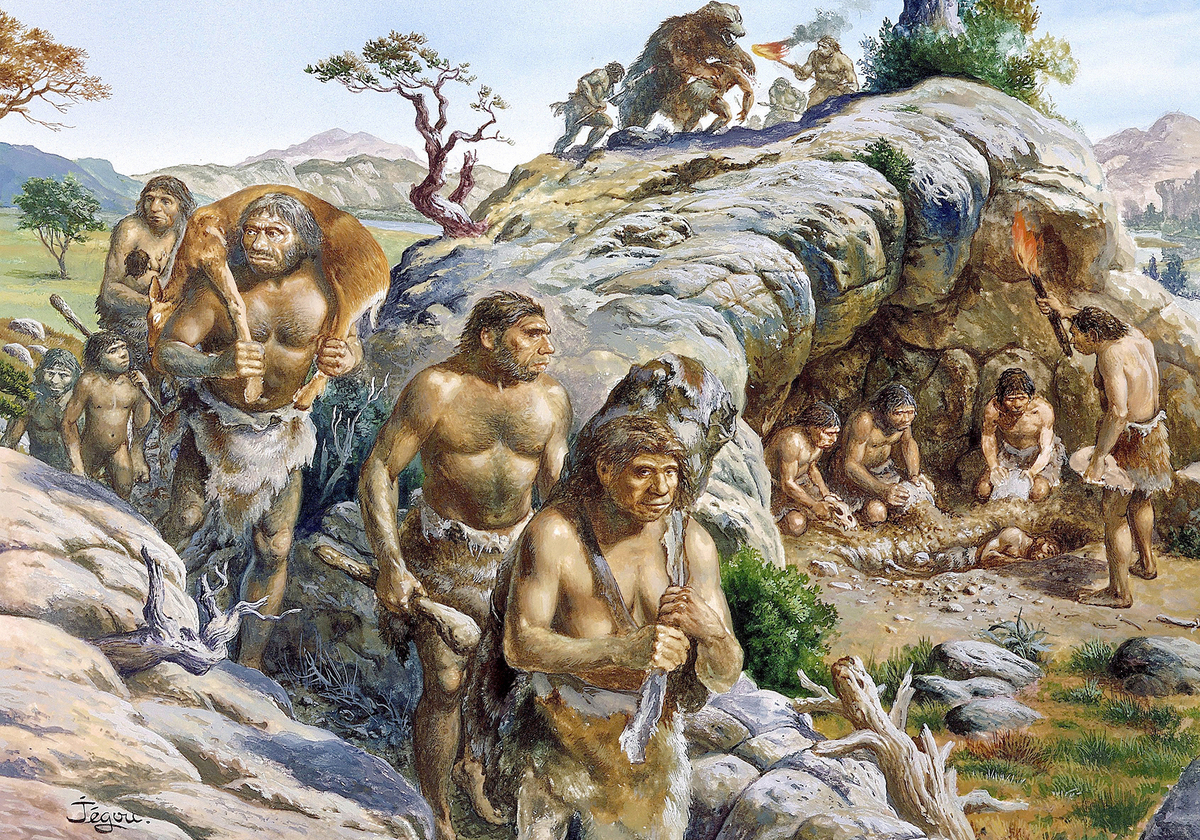 Archaeologists have suggested that Stone Age people sometimes ate one another for nutritional reasons. But a new study suggests that from a calorie perspective, hunting and eating other humans wasn't efficient.

The meat on an adult human's bones could feed another person for over two weeks, or maybe a whole Stone Age tribe for a couple of days, according to a new report on the practice of Paleolithic cannibalism. No wonder, then, that evidence of cannibalism in ancient humans pops up in the archaeological record from time to time.

When the human bones look like they've been eaten without ceremony or ritual, showing gnaw marks on the bones or gashes where the tendons would have been, archaeologists have chalked the motivation for cannibalism to the fact that there's a decent amount of meat on a human, says James Cole, an archaeologist at the University of Brighton. But that story just doesn't add up when you look at the calories in human meat when compared to other large prey, Cole says.

Based on his calculations, published on Thursday in Nature Scientific Reports, a single human adult male is nutritionally worth about 143,000 calories or 32,000 calories, if you only ate the skeletal muscle. That's a lot of calories, but by comparison, a horse carcass would get you six times as many.

And humans probably took a lot more effort to hunt and kill than most other animals, Cole suggests. As NPR has reported, humans and horses are almost an even match when it comes to running. "If you're hunting your own species, it's the same size as you and can think just as well as you and can fight back just as well as you can," Cole says. In other words, hunting a fellow human for food would probably take more energy than hunting a horse, he says. "We aren't a great return of calories for the amount of effort."

Besides, bigger, better prey was available to the ancient humans that appear to have practiced cannibalism. "We're not dealing with populations on the edge of starvation. They're successfully bringing in big game and butchering and eating them," Cole says.

So, why turn to human meat at all?

Cole thinks that when cannibalism did happen among early humans, people might have just been taking advantage of a windfall of fresh meat rather than people hunting people for food. "The motivation might have been more social in nature. It could be around something like territory defense – an interloper comes and you attack them and then – you eat them."

That much makes sense, says Bill Schutt, a zoologist at Long Island University and the author of Cannibalism: A Perfectly Natural History. It's a hard rock life in the Paleolithic, he says. When human meat was available, perhaps because of a natural death or violent conflict, "It's likely that [early hominids] were extremely opportunistic and sometimes ate each other. Were they just going to leave [dead bodies]? No! I think you would have eaten them," Schutt says.

But if the decision was only based on caloric value, hunting humans might have still been a decent use of time when compared to similar sized animals, Schutt says. "If you look at [Cole's] table, the human has more caloric value per kilogram than an ibex. And an ibex is a pretty decent sized animal."

Plus people were probably an easier prey target for other people than what Cole suggests, says Deanna Grimstead, an archaeologist at Ohio State University who did not work on the study. "Imagine the risk of hunting a mammoth versus hunting a hominid. "They could be trampled," Grimstead says. "You're never going to convince me that a hominid is going to outrun a cheetah. Easier? Well, it's way easier to run down someone of your own species rather than something three times as fast as you."

It's true that humans are puny and squishy compared to something like a bear, Cole says. "But we do have great intelligence, stone tools and spears with which to fight back. I fail to see why that would make us any less dangerous or an easier option than a horse for example. We can outthink our attackers, lay traps for them."

Cole thinks that hunting humans would cost a hunter too many calories to make it a common practice. It would just be more efficient to go after almost anything else, he says.

Grimstead, though, is unmoved by this argument. "You have a chance of surviving a spear point, if it's just a flesh wound. But if you get skewered by a mammoth tusk?" she says. If the only reason for eating people is a simple effort spent versus calories gained calculation, it would still make sense to eat humans for nutrition, she says.

But she agrees with Cole that humans probably weren't out actively hunting other humans all the time. Eating people might have had other, detrimental consequences. Conflict could start between different hunter-gatherer groups should one person make lunch out of a member of a different group. And eating people within your group is undesirable because you might be related, she says.

Grimstead thinks there's really only one good reason why humans chowed down on fellow humans outside of cultural reasons. "[Human cannibalism] is where people have nothing left to eat and they can't leave to find other food options," she says. "It's about survival."

Angus Chen is a journalist based in New York City. He is on Twitter @angRChen.