Accessibility links
Oaky, With Notes Of BS: Why Wine Tasting Struggles To Get It On The Nose : The Salt Unlike food — which gives us sensory cues like crunchy and hot, as well as tasting, say, salty — with wine, it's all about tiny differences in taste and smell. The danger is in getting too poetic. 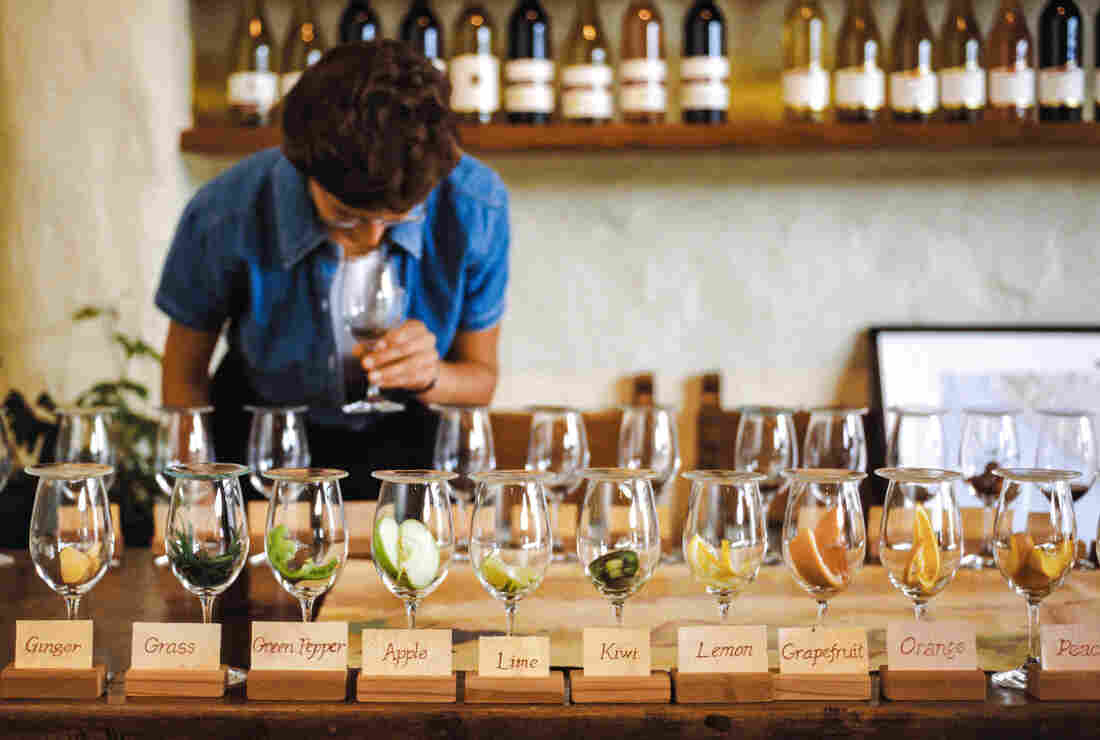 A visitor to the Robert Mondavi Winery in Napa Valley, Calif., attends a wine tasting class. Unlike food — which gives us sensory cues like crunchy and hot, as well as tasting, say, salty — with wine, it's all about tiny differences in taste and smell. The danger is in getting too poetic. Charles O'Rear/Getty Images hide caption 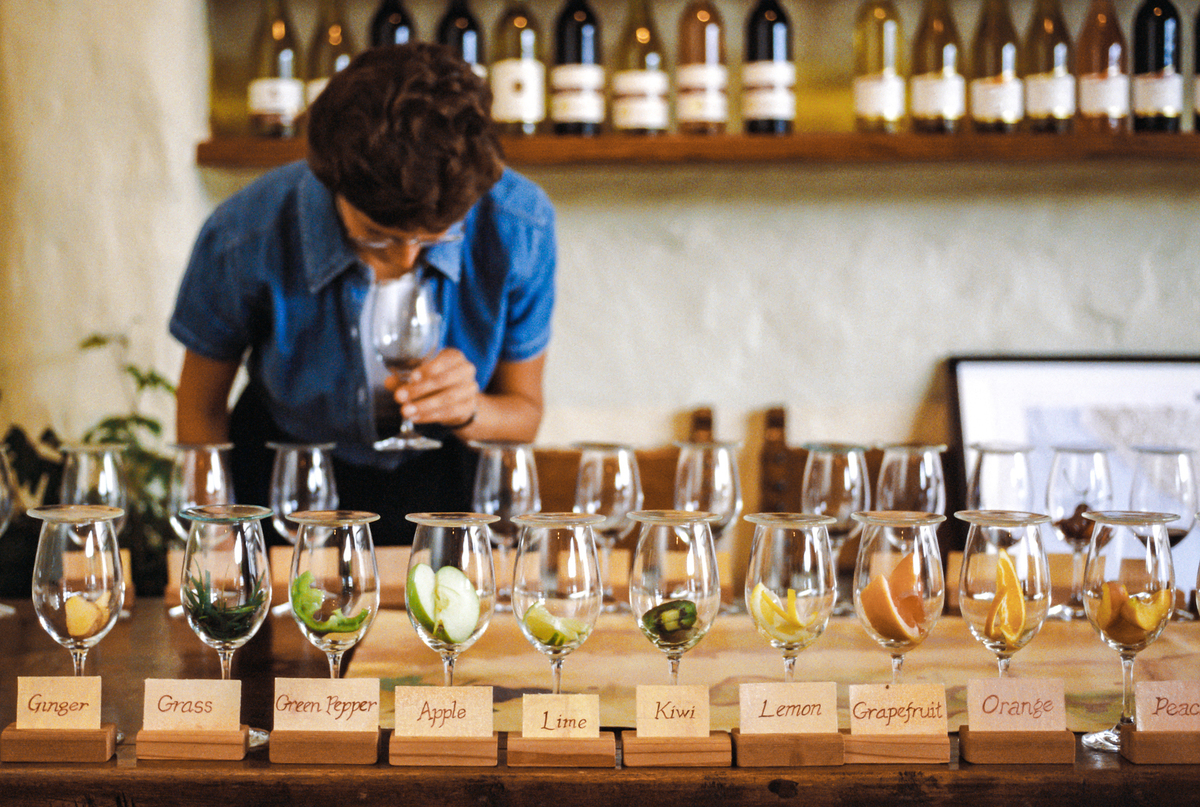 A visitor to the Robert Mondavi Winery in Napa Valley, Calif., attends a wine tasting class. Unlike food — which gives us sensory cues like crunchy and hot, as well as tasting, say, salty — with wine, it's all about tiny differences in taste and smell. The danger is in getting too poetic.

Rarely have I gotten so much enjoyment from a newsletter, but also, rarely have I been so confused. Did I want to buy these wines that smelled like "Bing cherries burnt by a flaming walrus tusk and washed down with gulp of bitter Iron Goddess tea?" Yes, yes I did. Did I know what any of that meant or what to expect when I opened a bottle? God, no.

This is a common problem with the average wine consumer. In her new book, Cork Dork, writer and certified sommelier Bianca Bosker says you can teach yourself to taste.

She traces her wine education from being a total novice working as a cellar rat in a New York restaurant to becoming someone who could blind taste with impressive accuracy. Though the book is very much a glimpse into the strange world of wine, it's even more about taste — how to do it, how to describe it, and whether anyone knows what they're doing at all.

Bosker describes having a "crisis of confidence" after bringing a blind-smelling exercise to her fellow sommeliers. She filled six plastic cups with herbs, covered them in foil, and poked holes into the top. "If the somms could smell chervil in their wine, surely they could smell chervil in chervil?" Bosker writes.

Unfortunately, this was not the case.

According to a theory she notes elsewhere in the book, perhaps instead of real chervil, the aroma these sommeliers were noting was simply something they'd heard others describe as chervil in the past — a game of telephone for the nose.

The Taste Of Wine Isn't All In Your Head, But Your Brain Sure Helps

Tasting notes, which are meant to be a helpful guide, might just be creating new confusion for the lay drinker. "If you're a [wine] critic and you say you smell 'peppered raspberry' and 'pomegranate' and you, the drinker, don't sense them, you'll think there's something wrong with the wine or something wrong with you," Bosker tells NPR.

While we may know as many as 30,000 words in our native language, we're not nearly so good at defining the hundreds of thousands of distinct smells our brains process.

"There's an incredible richness of information we're neglecting and we can remedy that by teaching ourselves how to taste," Bosker says.

In the 1980s, Ann Noble, a professor at the University of California, Davis, came up with a solution to this challenge, at least for wine. Frustrated by the lack of accountability in tasting notes — especially with impossible-to-define descriptions like "skyscraper-like texture," "elegant," or "romantic" — Noble developed an aroma wheel, which culled and categorized some of the most common aromas identified by the wine industry.

Does the wine seem reminiscent of tropical fruit? Take it a step further and try to identify whether it's more like bubblegum or kiwi. If there's a hint of vanilla, the aroma wheel hints that it's likely to be caused by oak aging. It's hard to state how influential this wheel has been. Variations of it can now be found to help identify distinct aromas in coffee, olive oil, honey and chocolate.

"You used to have all these emotional sort of words that would be off-putting to someone who didn't know what it meant — 'esoteric' or 'exclusive,' " Noble says of pre-aroma wheel tasting notes. "Now you see more specific terminology."

Speaking the same language, whether in wine or life, is important for communication. For many consumers, a sommelier's saying a wine is "bold" means as much as saying it's gobbeldygook. And these words are important.

Unlike food — which gives us multiple sensory cues like crunchy, hot, squishy or stringy in addition to tasting salty or like apricot — with wine, it's all about minute differences between taste and smell.

In the interest of selling wine or passing sommelier exams, Bosker said, people sometimes take the poetry of wine too far without understanding where these words come from and how to use them. The terms we use to describe wine have often been representative of the times we live in.

For example, in the '80s there were a lot of terms like "svelte and lithe and muscular," Bosker says, reflecting a cultural attachment to spandex and Jazzercise. Today the foodie movement has led to terms like "organic rutabaga," while a need to "quantify our hedonism" has started some tasters down a path of referring to the chemicals that we're smelling like pyrazine (found in bell pepper) or mercaptans (the culprit behind the smell of odorous socks or rotten cabbage).

"Wine tasting, yes, it helps you appreciate wine, but it's a discipline that can teach you how to appreciate anything in life more whether it's a walk in the park or," Bosker says, laughing, "the smells of the subway."

All this isn't to say that the poetry of wine should be lost forever. Perhaps it's time wine was marketed more like food: Start with an objective list of ingredients and then use marketing language to make consumers feel a certain way to buy it. A wine can taste of red fruit and leather at the same time it makes you feel like you're in a cabin listening to love songs on the radio. Now that's a wine I'd like to drink.