Accessibility links
Wake Up And Smell The Matzo: A Passover Breakfast Tradition : The Salt A dish of soaked and scrambled matzo might not sound terribly exciting. But for many Jews, matzo brei is a Passover treat they look forward to all year. 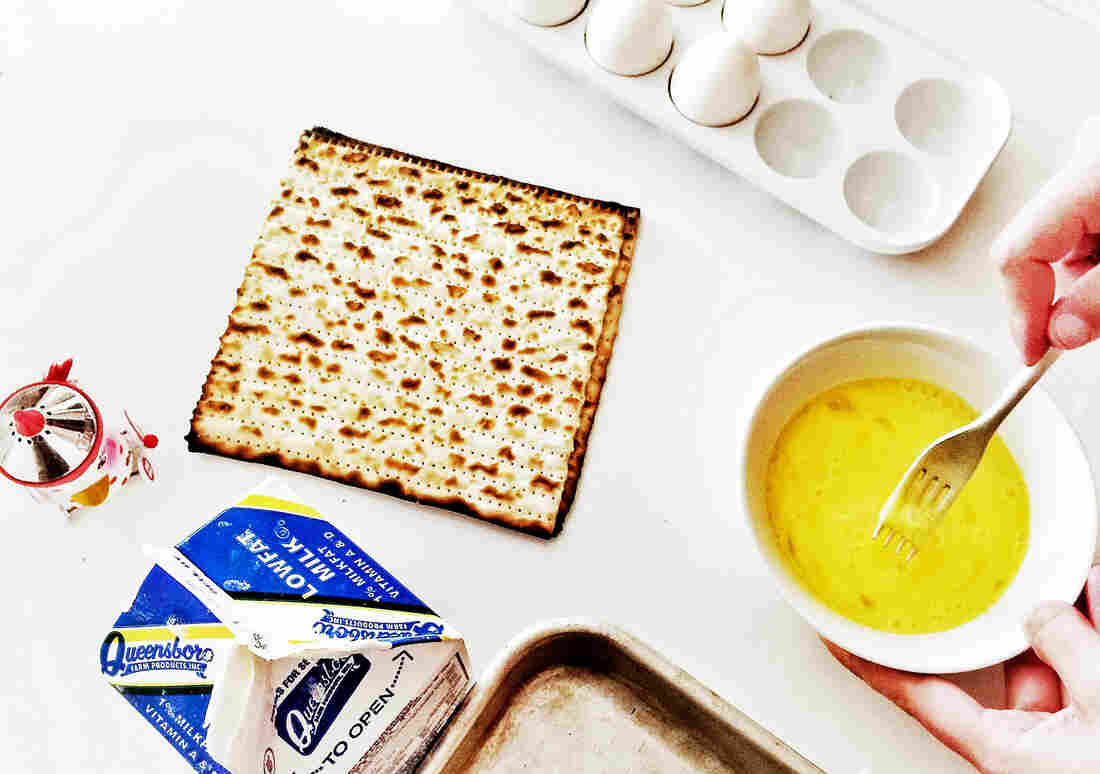 To make matzo brei, crumble leftover matzo, soak it, drain it and beat it with an egg or two. Then, fry it up, scrambled or omelet-style. Tali Blankfeld/Flickr Editorial/Getty Images hide caption 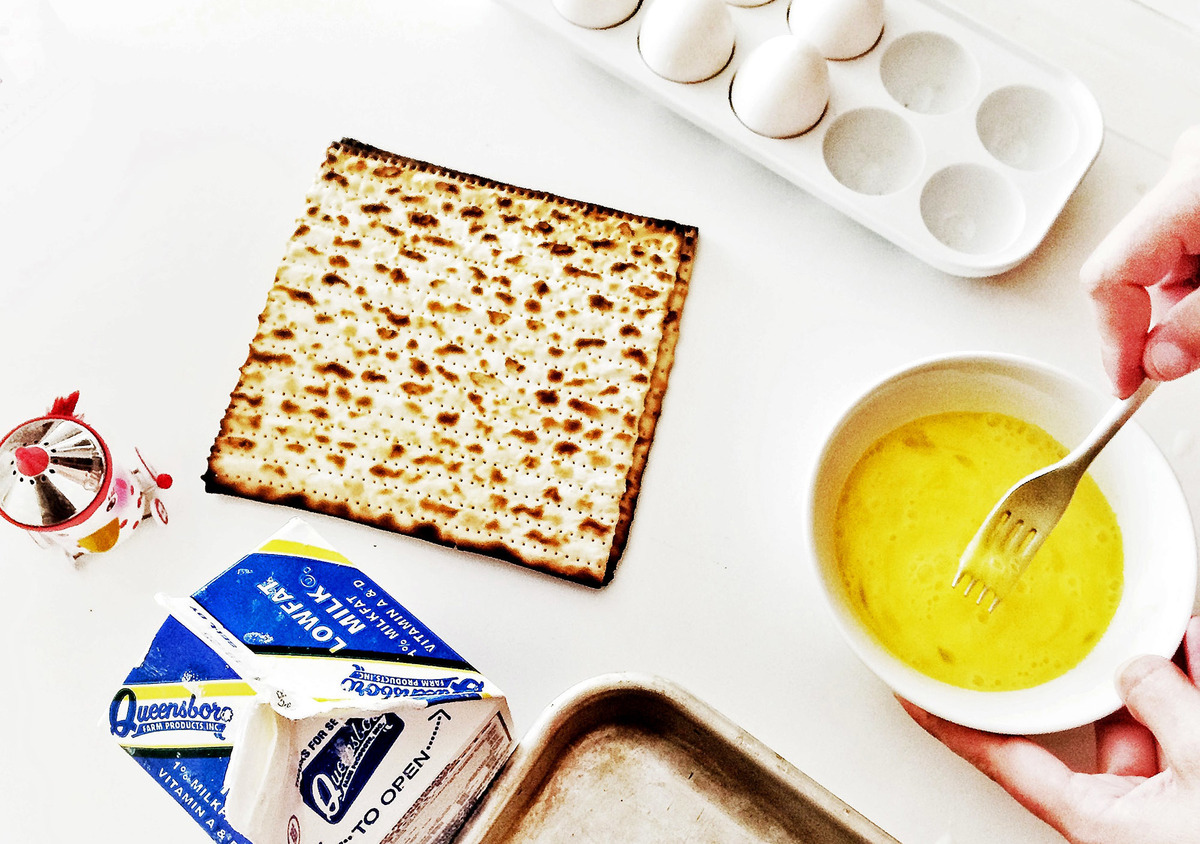 To make matzo brei, crumble leftover matzo, soak it, drain it and beat it with an egg or two. Then, fry it up, scrambled or omelet-style.

During Passover, many Jews avoid leavened baked goods to commemorate the hasty exodus from Egypt ­­­– which means farewell to pancakes, waffles and biscuits.

So what's for breakfast during those eight long days? Matzo brei.

For the uninitiated, here's what passes for a recipe: Take some matzo (aka Passover flatbread) and crumble it into chunks. (If you've just had a Seder, encountering leftover matzo should not be a problem.) Soak it in water until just moistened – or fairly soggy, depending on how much crispness you'd like in the finished product – then drain and beat with an egg or two. Fry it up, either scrambled or omelet-style, and serve with a sprinkling of salt – or try sugar or syrup. (The savory and sweet camps each have their devotees.)

According to Yiddish scholar and culinary historian Eve Jochnowitz, the term brei comes from the word meaning to scorch or sear. And it rhymes with "fry," at least in the Standard Yiddish dialect. (The Central Yiddish pronunciation rhymes with "whaa.") In some Eastern European regions, the dish is called oyfgefrishte matsas, meaning the matzo has been "freshened up" – the same description used for French toast. 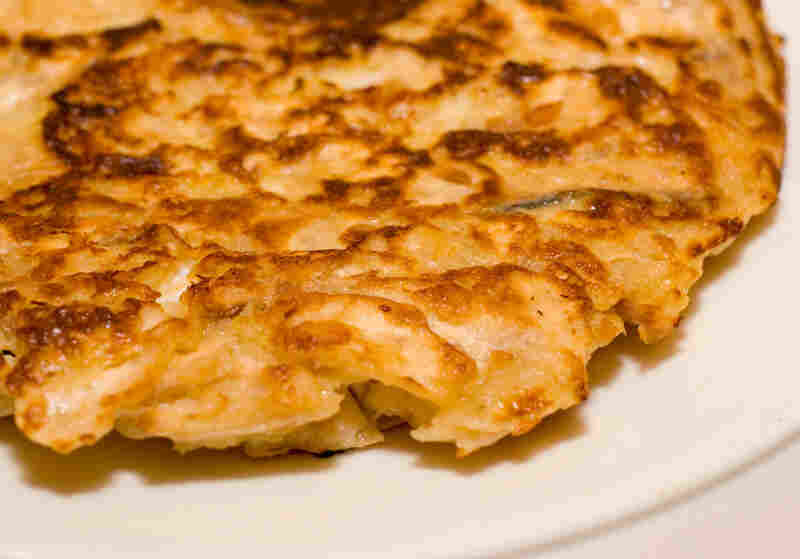 A dish of soaked and scrambled matzo might not sound terribly exciting, but it gets its staying power from family tradition and memory as much as from flavor. Jessica and Lon Binder/Flickr hide caption 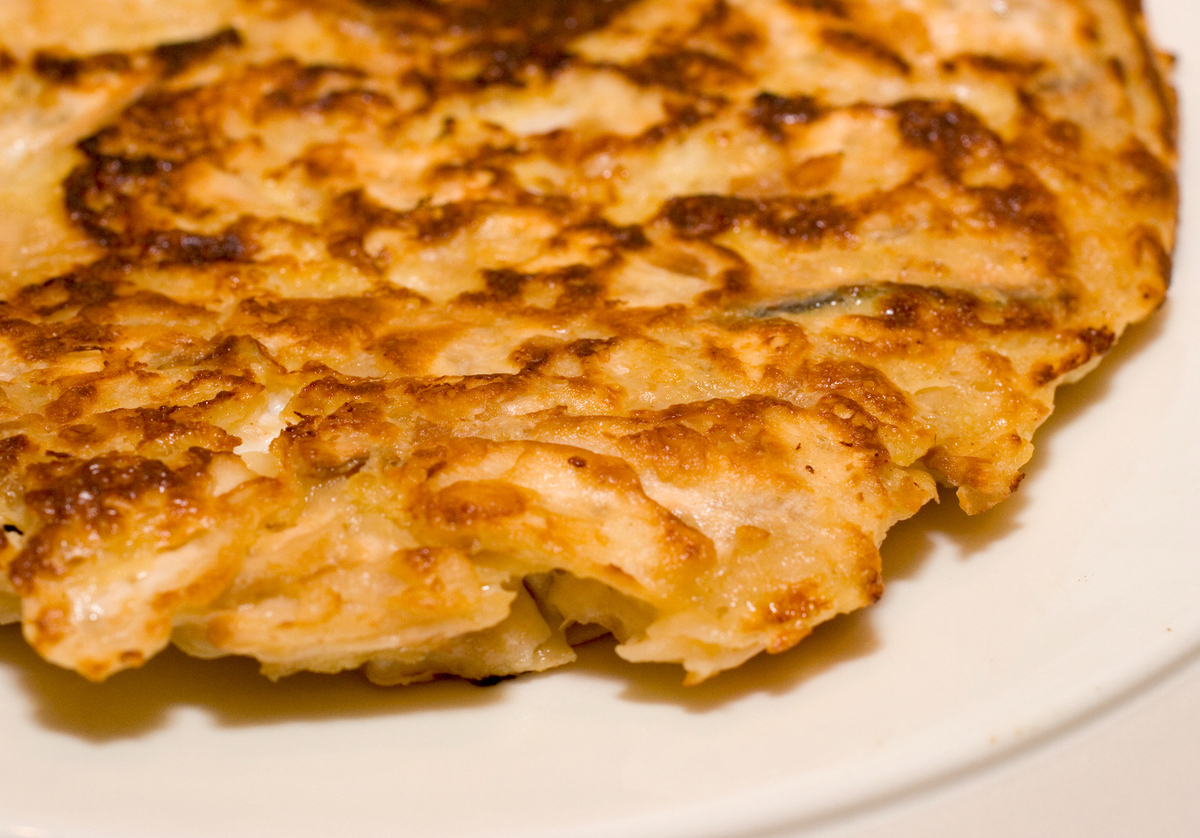 A dish of soaked and scrambled matzo might not sound terribly exciting, but it gets its staying power from family tradition and memory as much as from flavor.

A dish of soaked and scrambled matzo might not sound terribly exciting. In fact, it may sound terrible. But for many people, it's a treat they look forward to all year. Or, heck, even eat outside of Passover.

Ruth Reichl, former editor of Gourmet, often traffics in dishes that are a bit more, well, gourmet. But in My Kitchen Year, her memoir of reeling and recovering from the folding of the magazine, Reichl describes matzo brei as "even more comforting than carbonara."

It's not a comparison everyone could get behind. While both dishes feature egg-coated carbs, pasta carbonara has big flavors – the umami sharpness of grated pecorino/parmesan cheese, the smoky richness of cured pork – whereas matzo brei tastes like ... well, matzo.

But, for devotees, this seeming liability is actually something of a bonus. "Like most starchy comfort foods, it's a wonderful blank canvas to play with," notes food writer Jayne Cohen.

In Jewish Holiday Cooking, Cohen spikes matzo brei with artichoke hearts and fresh dill, or poached prunes in wine. Cohen also plays around before it hits the pan, swapping out the water used to soak the matzo for something that imparts a bit more flavor.

After hearing L.A. food critic Jonathan Gold describe chilaquiles, the dish of leftover tortilla chips fried up with eggs and salsa, as "Mexican matzo brei," cookbook author Joan Nathan riffed a version in her latest cookbook with matzo instead of chips (in addition to the eggs, crema and avocado).

In New York, the Matzahbrei food stand has taken it a step further, using matzo brei as a stand-in for bread to make a stuffed griddled sandwich, filled with such decidedly non-Ashkenazi ingredients as avocado and peach-mango salsa or beets in a minted tahini sauce.

"Those who know what matzo brei is — and in New York, it's a lot of people — they're shocked," laughs Sagi Shahar, co-founder of the business. "We get a lot of laughter, a lot of smiles. A lot of people say finally." And during the food stand's busier seasons, he estimates it goes through 10,000 matzos a month.

Despite the popularity of this Passover food in all its variations, there are some who argue that it's actually not appropriate for Passover at all.

The whole point of matzo is that it's an unleavened bread – a flat cracker made from flour that hasn't spent even 20 minutes in contact with water before it's in and out of the oven, to avoid any chance of rising. And matzo brei and other dishes in the same category ­– known as gebrochts, or broken – call for the baked matzo to be broken up and then mixed with water again.

While they might not be perfectly in keeping with the spirit of the holiday, Jochnowitz, the Yiddish scholar and culinary historian, says she, like many others, will keep matzo brei and similar items on her Passover table.

"You might as well stay in Egypt if you can't have matzo balls," she says.

Like so many holiday dishes, matzo brei gets its staying power from family tradition and memory as much as from flavor.

Shahar says that some patrons of the Matzahbrei food stand look at his listings of herbed sauces and sauteed mushrooms and then go off-menu, asking if he can make plain old matzo brei, just like their beloved father or grandmother used to make.

"No fillings, no toppings," he laughs. "Just matzo brei."