Accessibility links
A Forgotten Piece Of African-American History In The Former Town Of Dearfield On The Great Plains : The Salt Nearly a century ago, Dearfield, Colo., was a thriving African-American farm community, admired by many of its white neighbors. There were even early signs of integration. Then came the Dust Bowl.

A Forgotten Piece Of African-American History On The Great Plains

A Forgotten Piece Of African-American History On The Great Plains 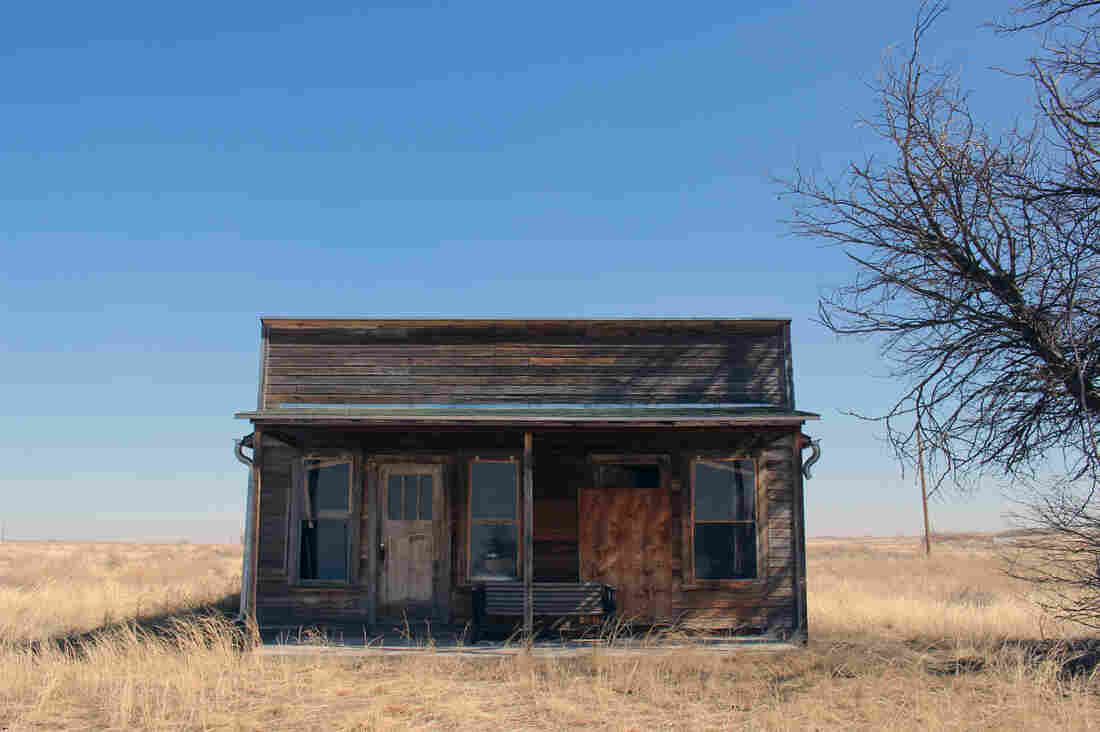 What remains of the home of O.T. Jackson, the founder of Dearfield, Colo., sits on the town site in rural Weld County. Luke Runyon/Harvest Public Media hide caption 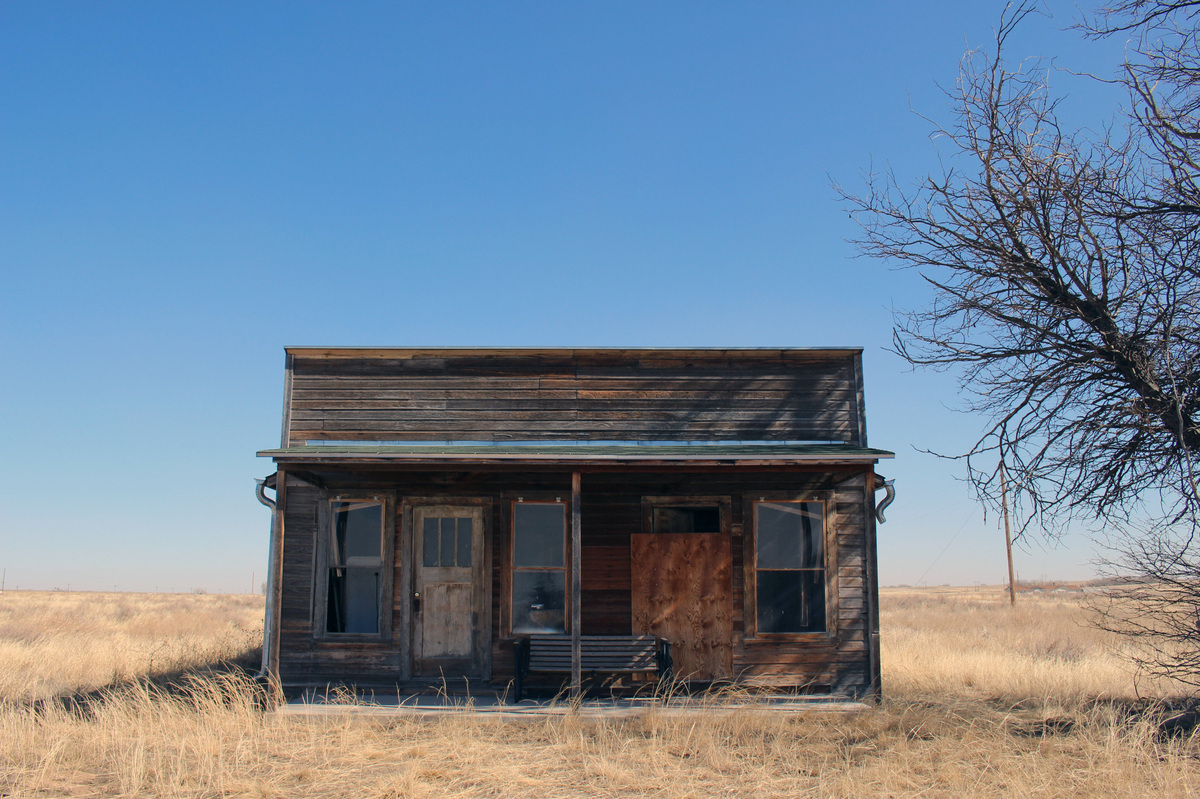 What remains of the home of O.T. Jackson, the founder of Dearfield, Colo., sits on the town site in rural Weld County.

Blink while driving on Highway 34, east of Greeley, Colo., and you might miss the former town of Dearfield.

All that's left of the once-thriving town on Colorado's eastern plains are a rundown gas station, a partially collapsed lunch counter and a former lodge. They are the only indication that there was once a community here. The grass around these buildings is crispy and straw-colored, whipped back and forth by relentless winds. The snowcapped Rocky Mountains barely peek through the haze to the west.

Abandoned towns from the early 20th century are far from unique on this stretch of the Great Plains. Withered storefronts and collapsed homes are common. Boom and bust economics and harsh weather made it tough for turn of the century settlers to succeed long-term.

Few ghost towns, however, have all the elements that make Dearfield's story so compelling: larger than life characters, struggles to live off the land, tales of racial integration at the height of the Jim Crow era.

The Thriving Farms Of Dearfield

Nearly a hundred years have passed since Dearfield's streets were bustling with homesteaders, the people who made this town special.

"It was the most successful, best known, African-American farming community in the United States at the time," says George Junne, professor of Africana Studies at the University of Northern Colorado, and the resident expert on Dearfield. 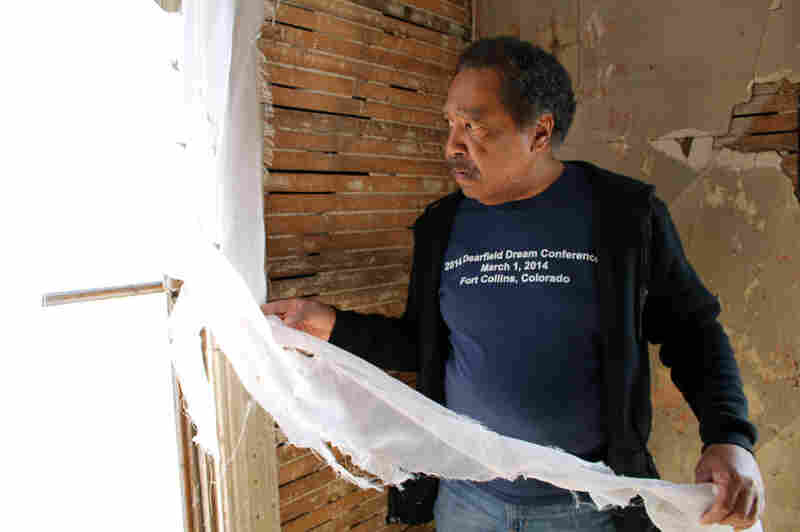 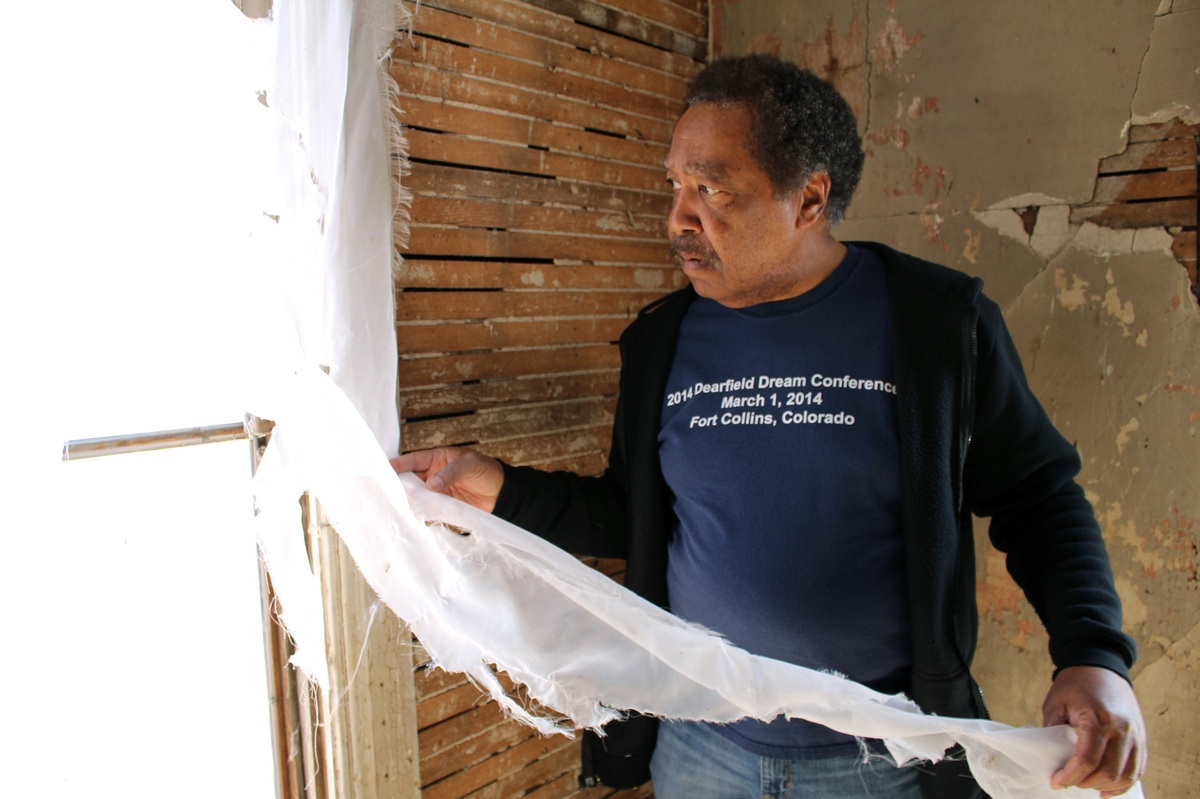 George Junne, professor of Africana Studies at the University of Northern Colorado, has spent years digging into the town's history.

Starting in 1910, Dearfield began attracting hundreds of black homesteaders from across the South, the Midwest and the eastern portion of the Plains. They came for opportunity. At its height in the early 1920s, 700 residents lived in town, with churches, a school, a blacksmith shop, a dance hall and a restaurant. And nearly all of the residents were black.

The community sustained itself on farming, taking advantage of the relatively abundant rains at the time. They had bumper crops – strawberries, squash, wheat – for more than a decade.

Unlike many Colorado towns, Dearfield did not come to be during the large wave of westward expansion spurred by the passage of the Homestead Act of 1862, but rather, a later iteration called the Enlarged Homestead Act. It enlarged the amount of land a homesteader could access and encouraged movement into more marginal lands, like where Dearfield was located.

"It pulled together primarily African-Americans who were interested in owning their own homes and their own farms," Junne says.

The Man Behind The Town

The community was the vision of its creator: Oliver T. Jackson, a successful black entrepreneur from Ohio. He started restaurants, ran the catering operation at Boulder's Chautauqua Dining Hall, and acted as a messenger for a series of Colorado governors.

Jackson wanted a place where black people could take out loans, work the land and get ahead. And he saw promise in the patch of land that eventually became Dearfield.

"He had a vision," Jay Trask, head of the University of Northern Colorado's archives, which houses found letters from Jackson and other Dearfield ephemera. "He had a really exciting vision. And I think it was a vision shared by a lot of African-American folks in Denver. There was a desire to create an African-American community, an agricultural community that would be their own."

Jackson was Dearfield's biggest cheerleader. He championed its early successes in farm magazines and newspapers that served African-American readers, and to local and regional politicians. 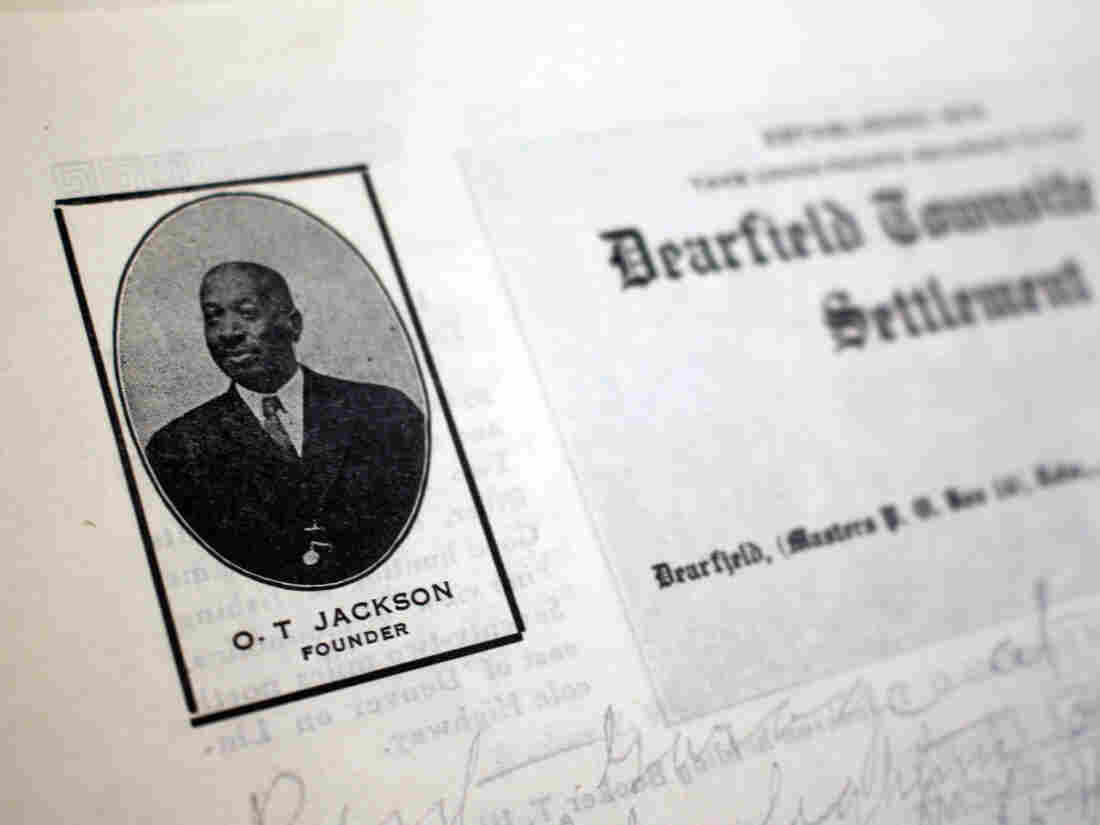 The visionary behind Dearfield, Oliver T. Jackson, lived in the town until his death in 1948. Luke Runyon/Harvest Public Media hide caption 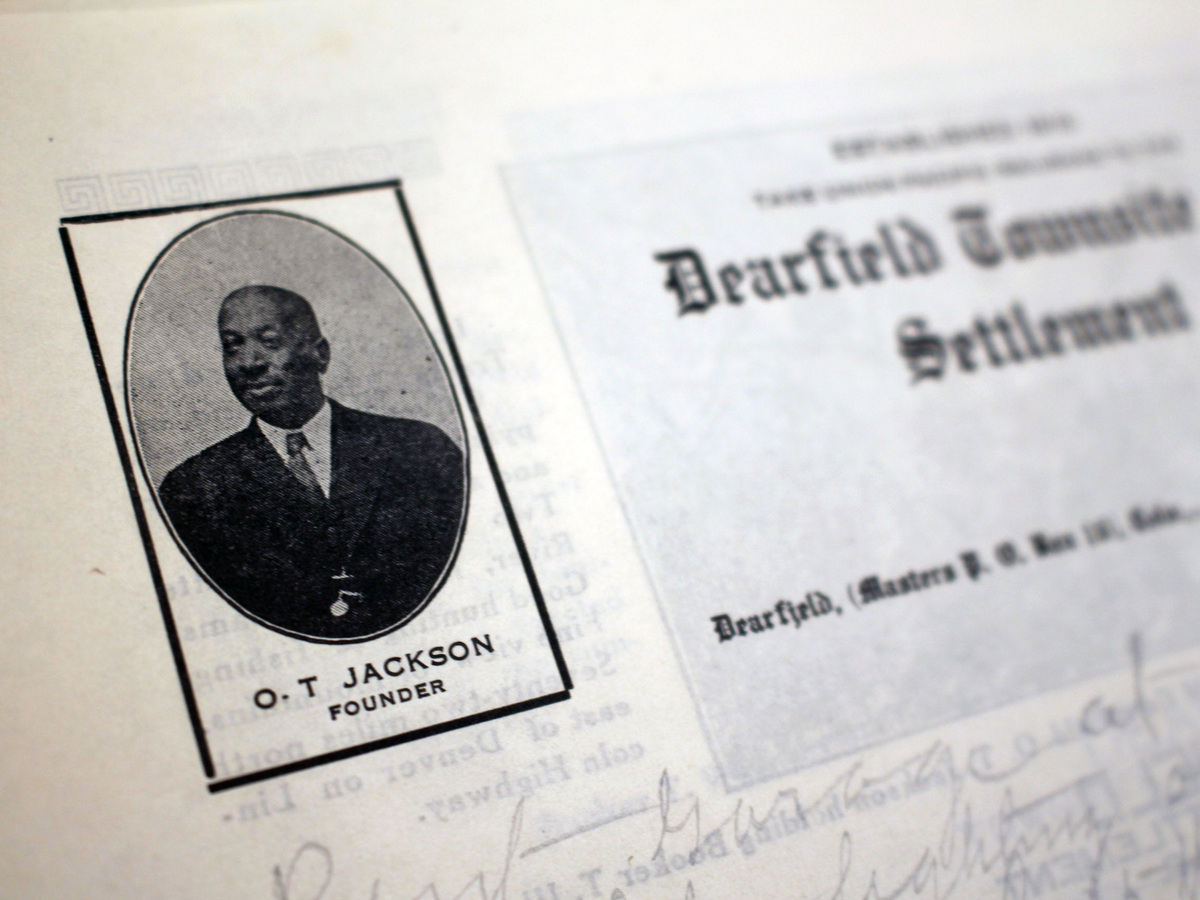 The visionary behind Dearfield, Oliver T. Jackson, lived in the town until his death in 1948.

"He was not shy about getting his name out there," says Trask.

While Jackson spent his time marketing the community and working in Denver, his wife, Minerva, acted as the town's "judge, jury and executioner," according to Junne. She ran the town's day-to-day operations, and ran them tightly. "When she snapped her fingers, you jumped," Junne says.

In promotional pamphlets, Jackson touted the community's rich soil and view of the mountains. Always on the lookout for newcomers to town, he made clear they were looking to grow. He never stopped thinking up new ways to make Dearfield succeed and fill its coffers, Junne says. Even Prohibition offered Jackson an opportunity.

"For a while, this town was known as 'Beerfield' because he was bootlegging here," Junne says. "He needed to make money to keep things going. The people all around here knew about it and they gave the nickname."

Dearfield gained a foothold during an incredibly tense time in America.

Along with other predominantly black towns like Nicodemus, Kan., and Boley, Okla., Dearfield sprang up at the height of the Jim Crow era. An active Ku Klux Klan chapter started in Denver around the same time, which was eventually infiltrated by Dr. Joseph H.P. Westbrook, a Denver resident and early Dearfield booster.

Yet, Coloradans and other homesteaders on the plains did not see new black residents to the state as a threat, either culturally or economically, Junne says. Despite rampant racism and violence in parts of the country, Junne says Dearfield's residents mostly found harmony with their neighbors. 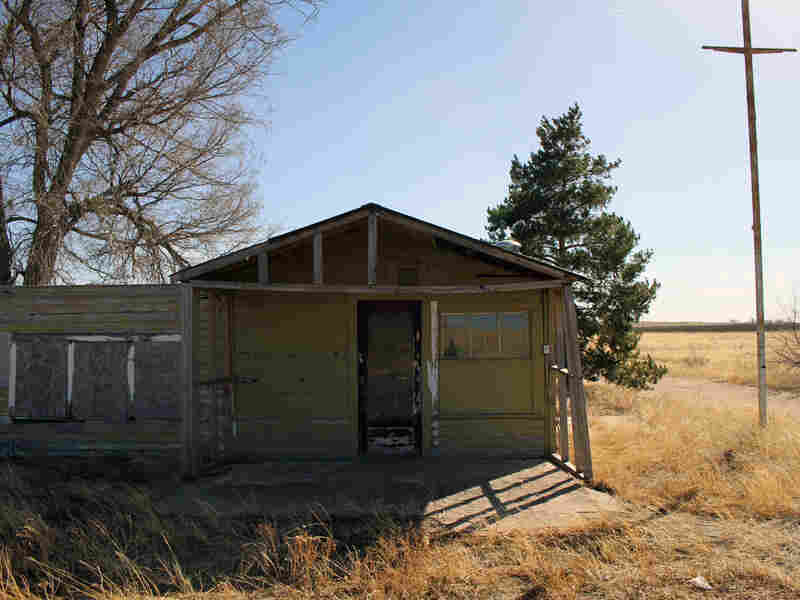 An abandoned gas station is one of the last few remaining buildings at Dearfield. Luke Runyon/Harvest Public Media hide caption 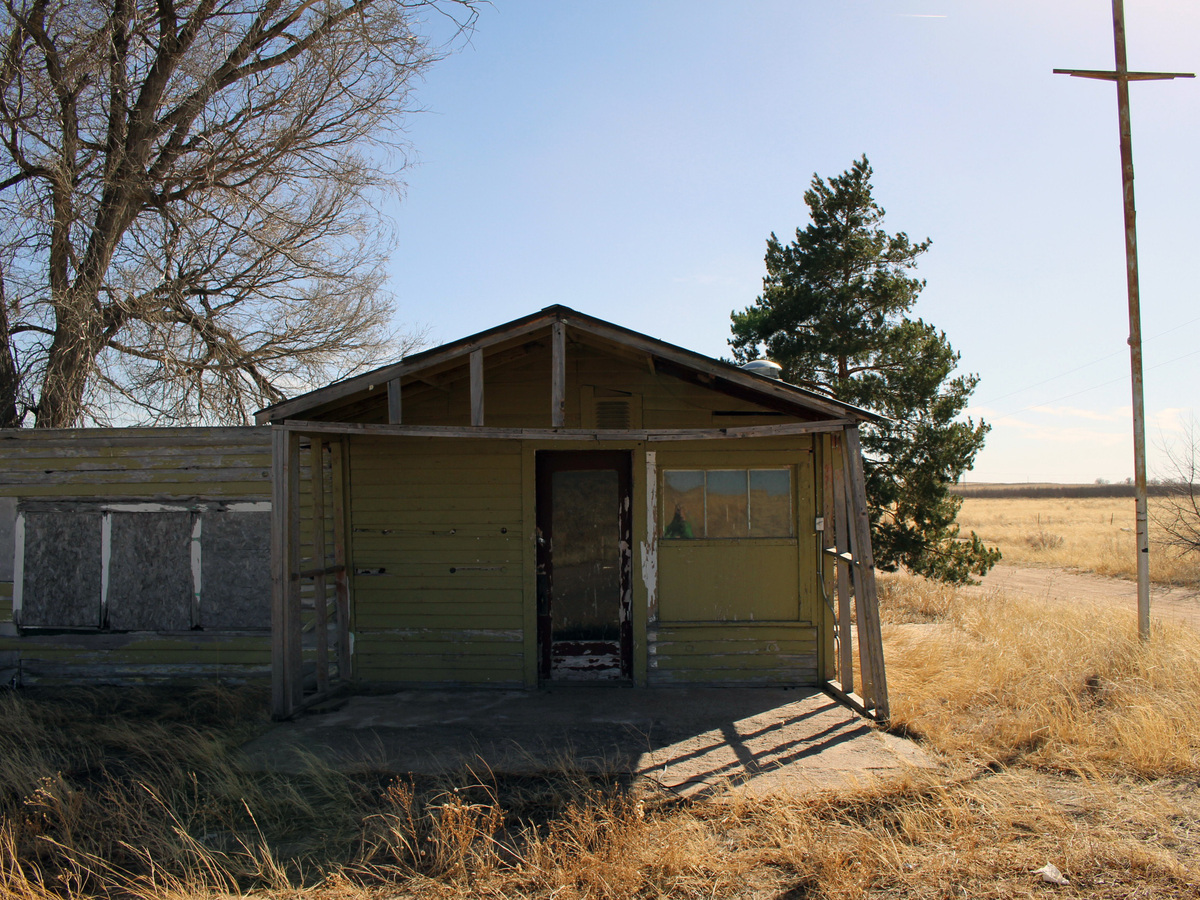 An abandoned gas station is one of the last few remaining buildings at Dearfield.

Newspaper articles in nearby Greeley marveled at the work ethic of the new residents. Many black farmers would pick up extra work on the white-owned farms surrounding the town, Junne says. A black Dearfield farmer was one of the first in the region to purchase a newly redesigned mechanical reaper and would lend it out to white farmers in the area. The plains communities, white and black, developed an interdependence on each other.

Elsewhere in the country, post-Reconstruction African-Americans were marginalized and disenfranchised in a myriad ways. Their votes suppressed or never counted. Schools were off-limits to black students. Violence against black communities was commonplace. And that's part of why Dearfield gained its rosy reputation. Just the fact that it existed and was largely successful, became a bright spot for black Americans.

While the town was certainly an agricultural experiment in testing out dryland farming techniques on Colorado's plains, it quickly became a social experiment, too. Early signs of integration were on display at the town's dance hall.

Dearfield was home to Squire Brockman, a well-known black musician. He would set up shop on Saturday nights to play fiddle and mandolin.

"The white people in the area would come out here and they would dance," Junne says. At the time, black people and white people were not dancing as couples, "but they were on the same dance floor together."

"So, again, you started to have the roots of integration because people respected each other," Junne says. "They needed each other." 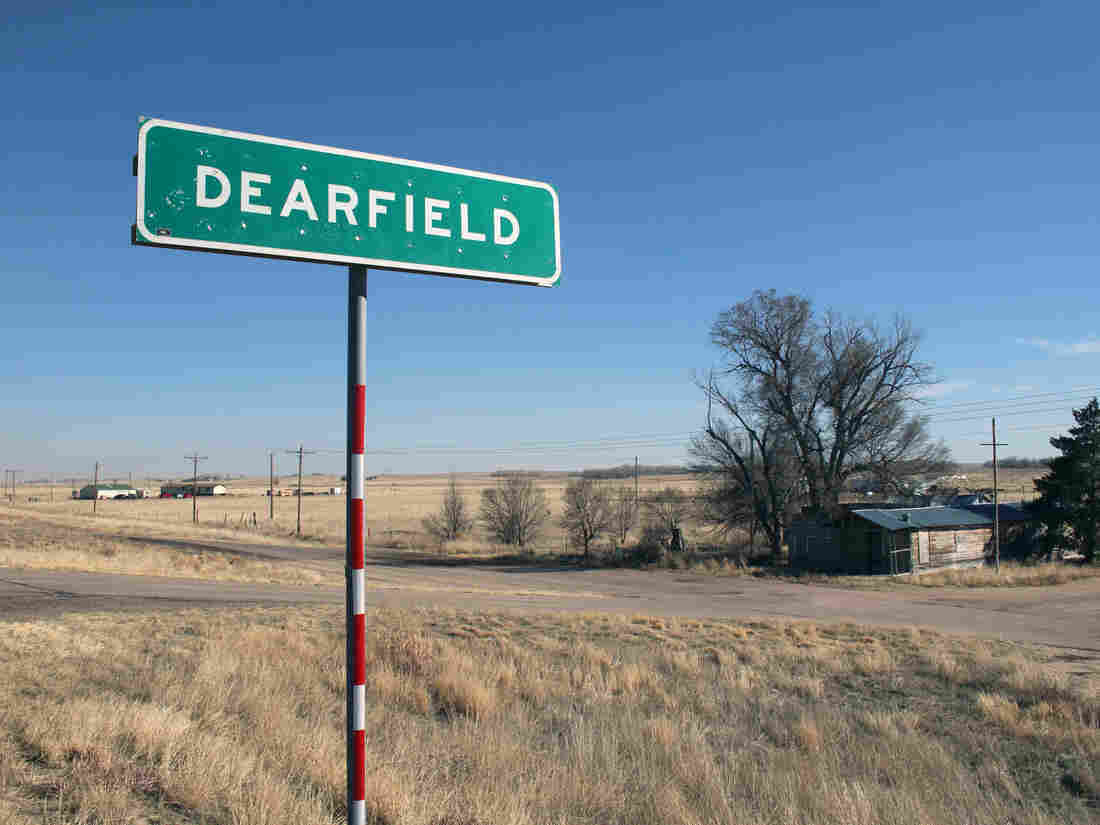 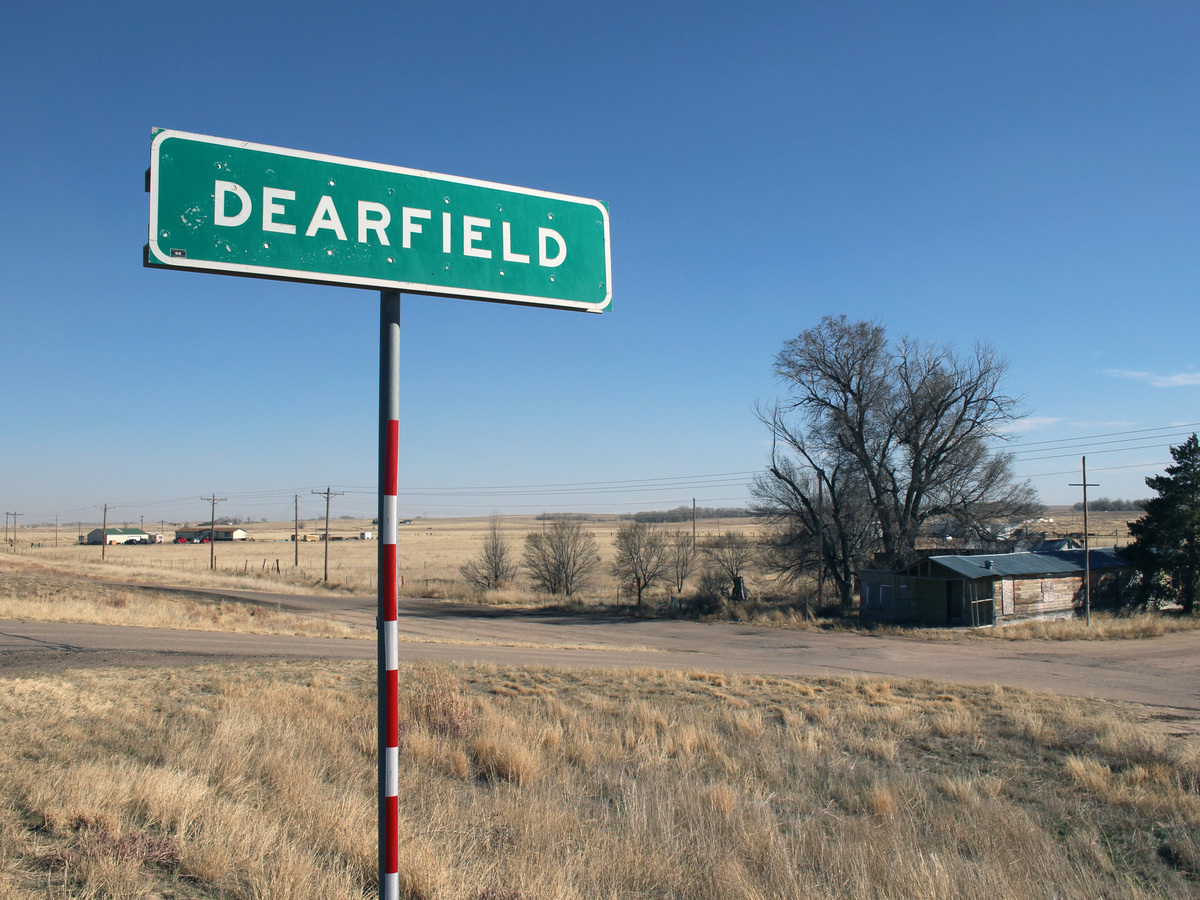 A marker on Highway 34, east of Greeley, Colo., shows where the African-American farming community of Dearfield once existed.

For about 20 years, the town was a success. Then came the one-two punch of the Great Depression and the Dust Bowl.

In the early 1930s, the large thunderhead clouds that were so common before, stopped materializing. Dearfield's seasonal creeks dried up. So did its wells. The residents had not acquired water rights to properly irrigate fields; instead, they relied on natural rainfall. Without rain, they could not grow their crops.

By 1940, Dearfield was largely deserted. Its founder, O.T. Jackson stayed until his death in 1948. Many people moved to Denver's Five Points neighborhood in search of work, or moved even further west. Just a few residents hung on. The last known full-time resident of Dearfield was Jackson's niece, Jenny Jackson, who lived on-site until she died in 1973.

Today, a plaque sits outside the dilapidated lunch counter that tells the history of Dearfield. The town site's ownership is a patchwork: some owned by a real estate developer, other plots owned by descendants of the original homesteaders, and parcels owned by Denver's Black American West Museum. 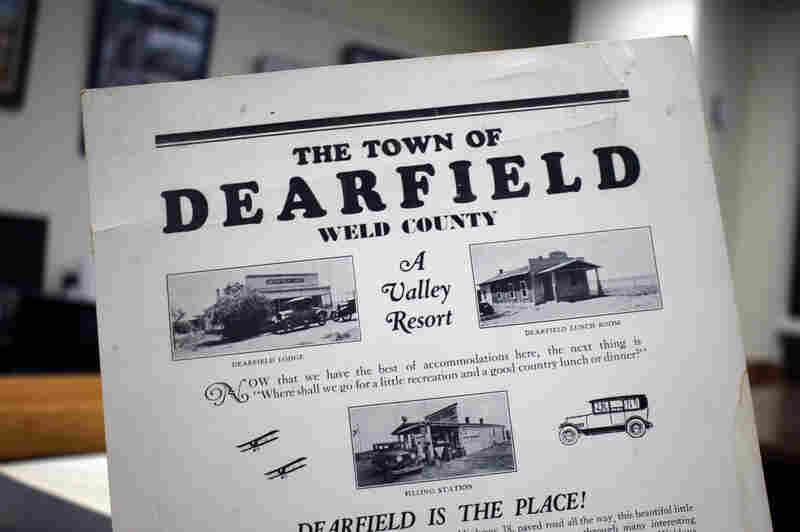 After the Dust Bowl and Great Depression wreaked havoc on Dearfield, its founder tried to rebrand the town as a vacation spot for hunters. Luke Runyon/Harvest Public Media hide caption 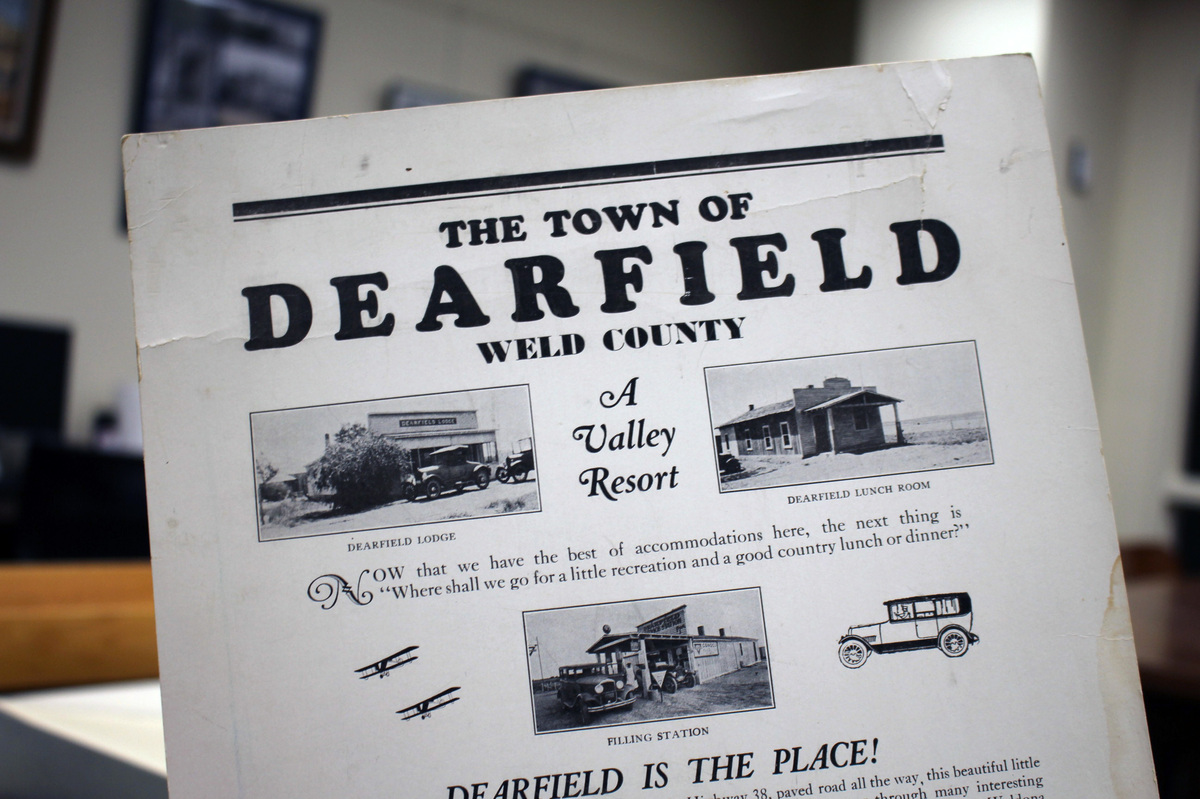 After the Dust Bowl and Great Depression wreaked havoc on Dearfield, its founder tried to rebrand the town as a vacation spot for hunters.

Grant money over the years has allowed historians and anthropologists to restore and protect the few buildings still standing, but Junne says it is in serious danger of disappearing. There is little money available to keep Dearfield's structures from further succumbing to the harsh weather. In 1999, the town was listed as one of Colorado's "Most Endangered Places."

"It was a wonderful idea, a wonderful experiment, and the spinoffs are just as important," he says.

Take for example, one of Colorado's first integrated schools just down the road from Dearfield, and the dozens of other black farm communities on the plains that tried to replicate the town's success. Denver's Five Points neighborhood owes some of its history to the early homesteaders at Dearfield.

That's the legacy of Dearfield, Junne says. It thrived for years during a period that was fraught with racial tension. And its residents were able to build a community from scratch at a time when it seemed impossible.