Accessibility links
Fungal Pesticides Offer A Growing Alternative To Traditional Chemicals : The Salt The rise of organic produce has sparked a new interest in using biopesticides like fungi to kill insects, instead of traditional synthetic ones. But they are still just a tiny segment of the market. 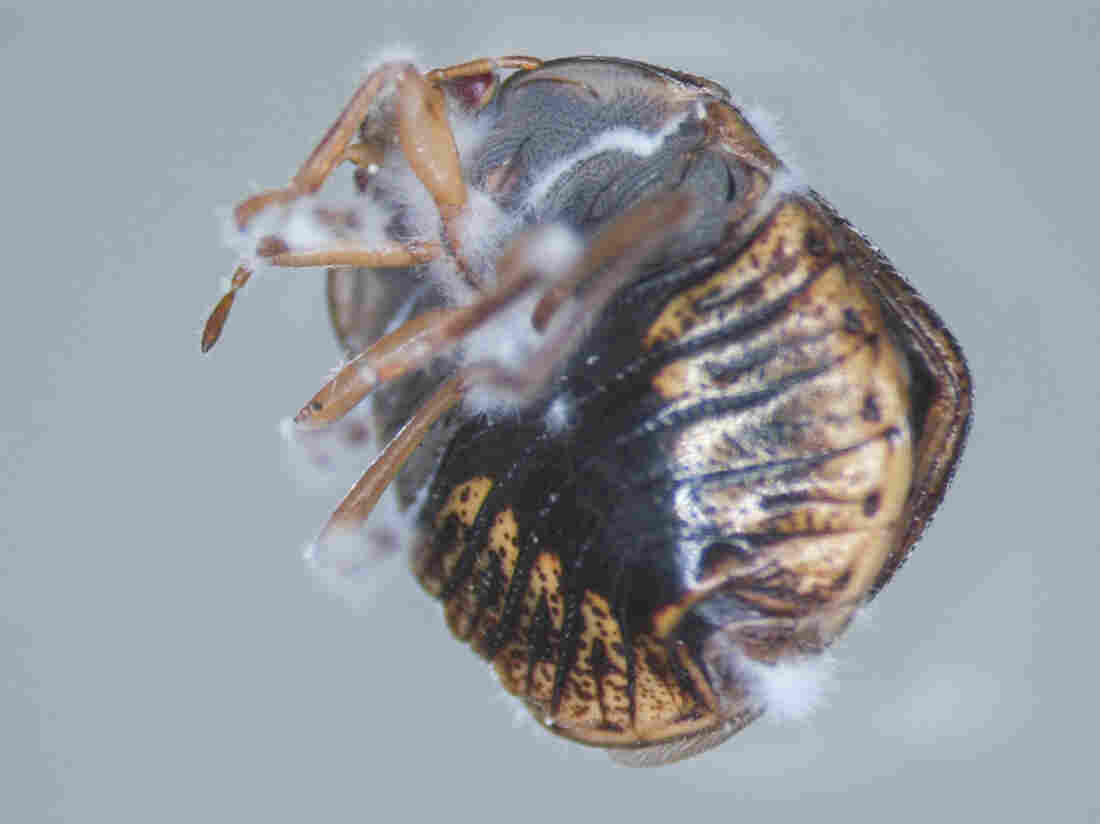 When it comes to biopesticides, one of the most widely used fungi is Beauveria bassiana. Above, a kudzu bug killed by Beauveria bassiana, seen growing out of the cadaver. Courtesy of Brian Lovett/University of Maryland Entomology hide caption 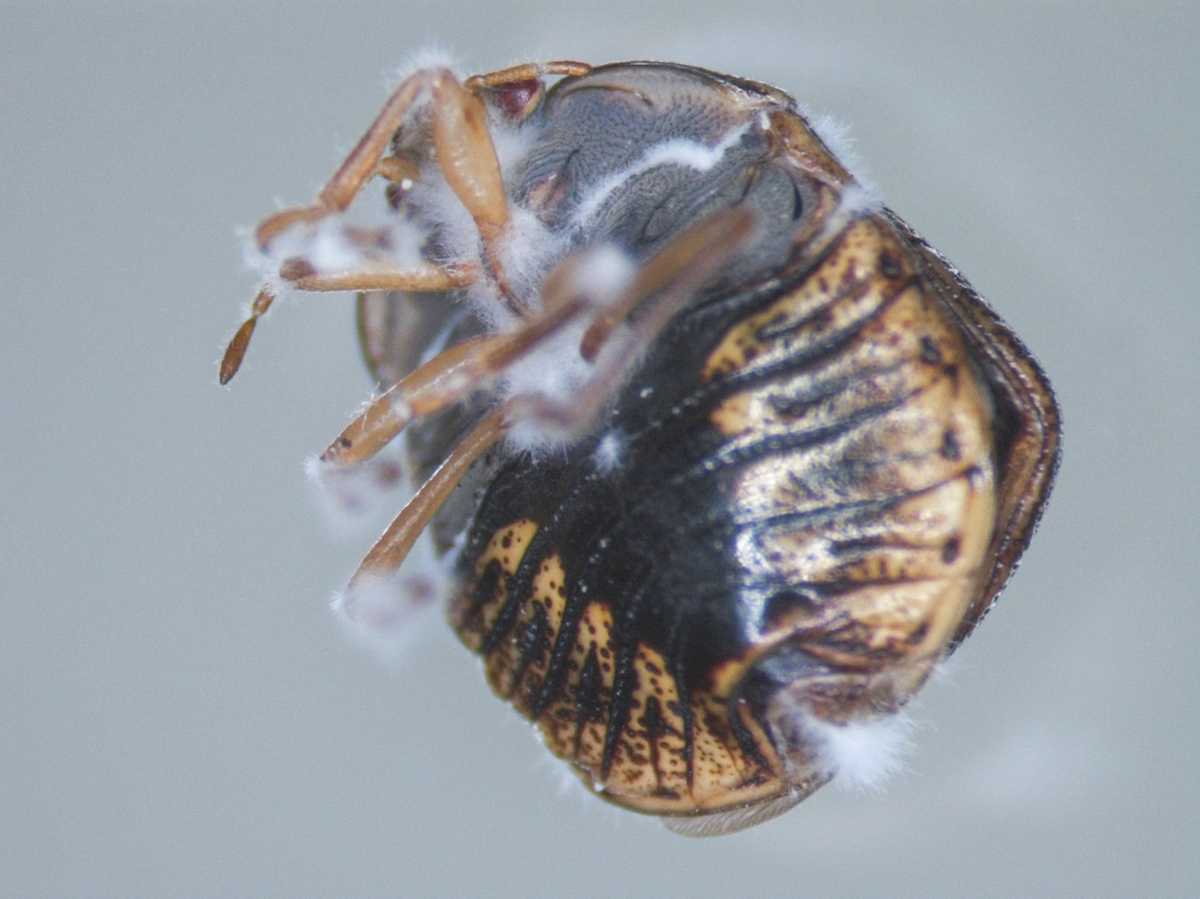 Pesticides based on fungi are just one example of biopesticides, a group that also includes bacteria and biochemicals derived from plants.

Biopesticides are a tiny segment of the market for now – but their use is projected to grow at a faster rate than traditional synthetic pesticides over the next few years.

The growth of the organic produce industry is one factor giving biopesticides a boost. So, too, are regulatory hurdles, says Sara Olson, a senior analyst at Lux Research.

"As it gets harder to get approval for novel synthetics and existing synthetic pesticides are pulled from shelves, biopesticides become more attractive," Olson says.

And then there's the rise of weeds and microbes resistant to traditional pesticides. "Many commonly used chemical pesticides are facing pressure today due to overuse, improper use, and long-term use," she says.

Some biopesticides repel pests, while others disrupt mating or cause a specific disease to strike invaders that would nibble on delicate fruits and vegetables.

Fungal-based biopesticides take things up a notch. Many of these products contain parasitic fungi – the kind that grow inside an insect's body and feed on its internal tissue until it dies (and sometimes beyond that).

While this might sound horrific, for some the benefits of using fungal-based biopesticides, rather than traditional chemicals, may outweigh the brutality.

Nemat Keyhani, a professor at the University of Florida Institute of Food and Agricultural Sciences, says fungus is compatible with organic farming, harmless to vertebrates — like humans, birds, dogs and cattle — and has a low environmental impact.

That's especially true when compared with synthetic pesticides, which often contain toxic chemicals such as arsenic, chlorine, ammonia and formaldehyde. Some synthetic pesticides have been shown to have harmful effects on the environment and human health. One family of pesticides, called neonicotinoids, is being blamed for the decline in bee populations over the last decade.

Fungi, on the other hand, are alive, and they could evolve along with the insects that they're being used to control. That means pesticide resistance may become less of an issue, says Olson. 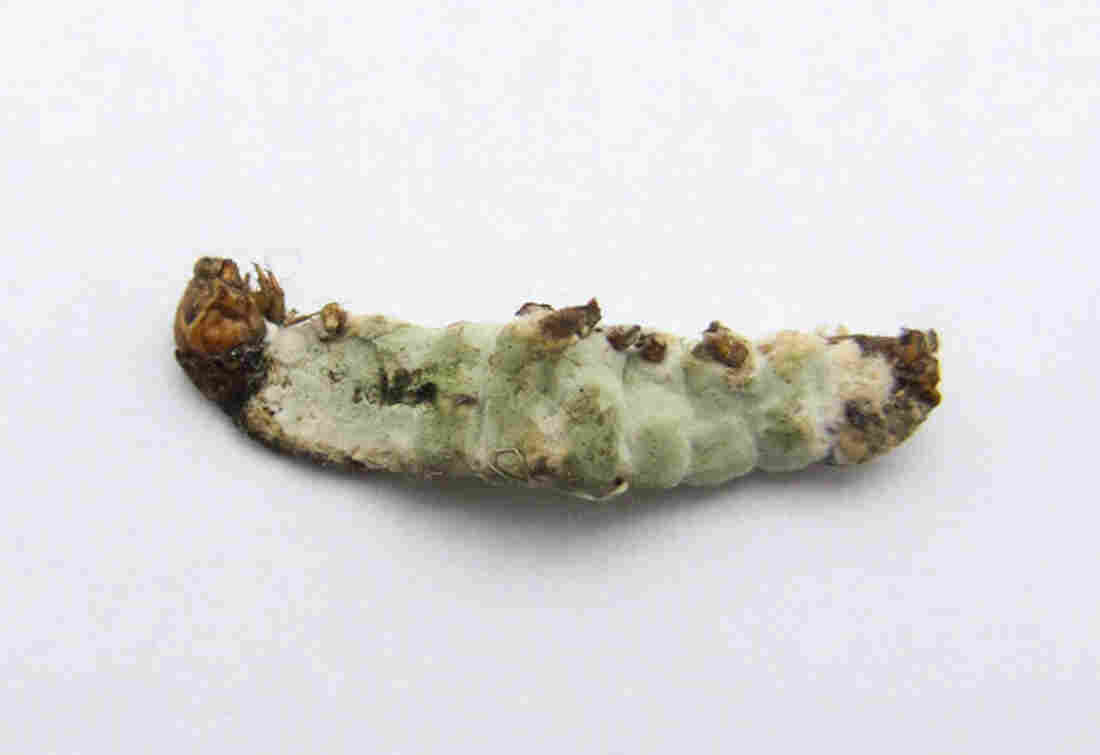 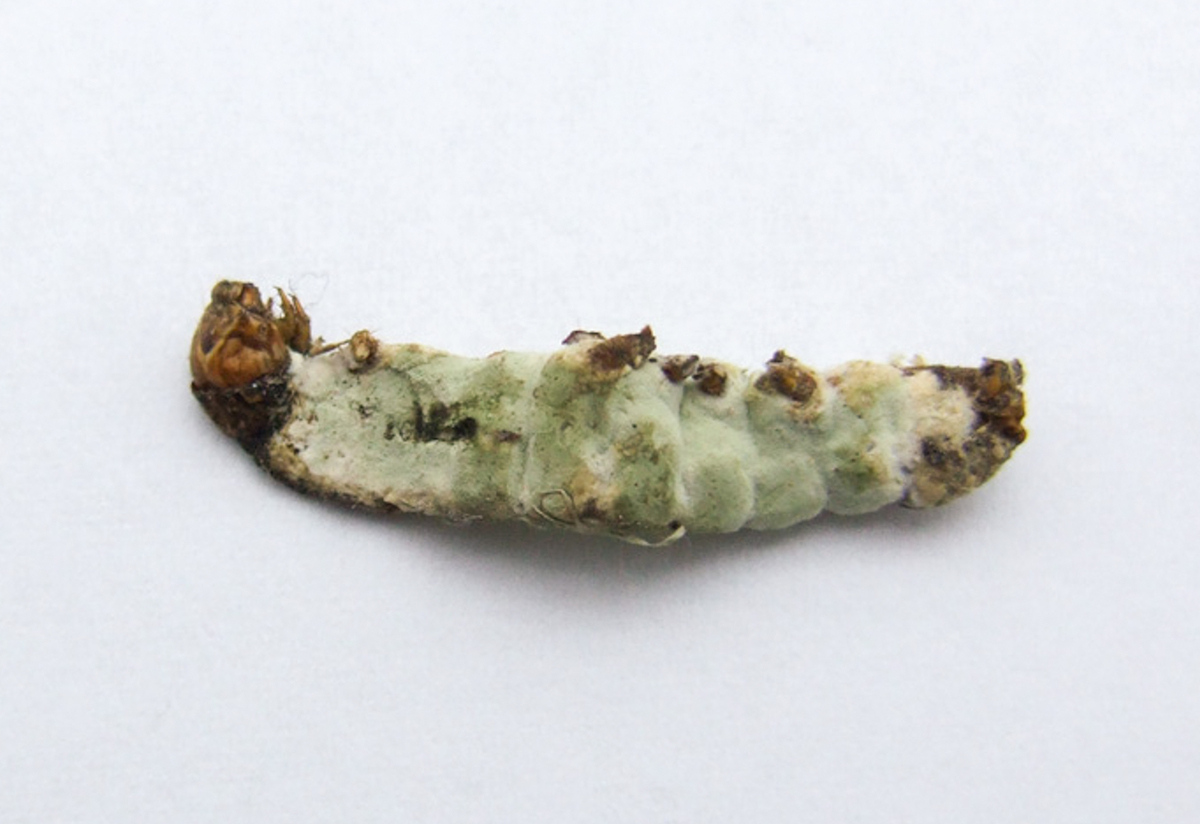 "It's a complex interaction between the fungus and the pest you're trying to control, rather than a direct, single-chemistry interaction from the synthetics, so that's going to make them potentially more robust to a resistance developing," Olson explains.

There are approximately 1,000 known species of entomopathogenic fungi – the kind that kill or seriously disable insects. Collectively they target most, if not all, agricultural pests, says Raymond St. Leger, an entomologist at the University of Maryland.

When it comes to biopesticides, one of the most widely used fungi is Beauveria bassiana. It infects a range of insects and is commercially formulated as products including Naturalis L, Naturalis H&G, Mycotrol and BotaniGard.

"In the 1800s, this was one of the very first fungi recognized as a disease agent that killed insects," says St. Leger.

It causes a disease known as the white muscardine. Even after an insect is killed, the downy mold continues to produce millions of new infective spores that are released into the environment. Beauveria bassiana effectively targets the pecan weevil, Colorado potato beetle and kudzu bug, among other pests.

Trichoderma, a versatile mold, is also commonly used. Some release enzymes that dissolve potential pathogens; others form barriers around plant roots and make it impossible for harmful bacteria and pathogens to pass through.

Another fungus — Metarhizium, or the green muscardine fungus — is frequently used in the field, shielding crops from beetle grubs, wireworm, corn root worms and countless other insects. One variant is now being used to develop biopesticides — including a line by MycoPesticide — that can cause a mushroom to grow from a pest's dead body to distribute spores that warn other insects.

But biopesticides can be quite expensive compared to synthetic pesticides. They often don't work as quickly and they have to be applied more frequently, making them a tough sell in some markets.

Paul Underhill, co-owner of Terra Firma Farm, an organic grower in Winters, Calif., has tried a few. "Some, like those with fungi, can require special storage, such as refrigeration. [And] the cost to the farmer can easily be 20 times what a conventional pesticide might be," he says.

One more downside: Biopesticides can be more sensitive to environmental conditions, including relative humidity and temperature and exposure to UV radiation.

Genetic manipulation might be the next step to get more fungi-based products to the market. Scientists are working with transgenic strains to improve fungi's ability to kill insects, tolerate adverse conditions and, extending beyond crops, fight against the transmission of diseases such as West Nile virus, Lyme disease and malaria. St. Leger's team is currently testing a strain of Metarhizium that's had a spider gene inserted that selectively targets mosquitoes.

Crystal Ponti is a science, technology and health reporter based in Augusta, Maine.