Accessibility links
Skittles, Champagne And Cigars: A New Generation Of Flavor Pairings : The Salt Cigar sommeliers are becoming increasingly popular in fine restaurants and hotels, pairing the nuanced flavor of tobacco with beverages, and using tart candies like Skittles to cleanse the palate. 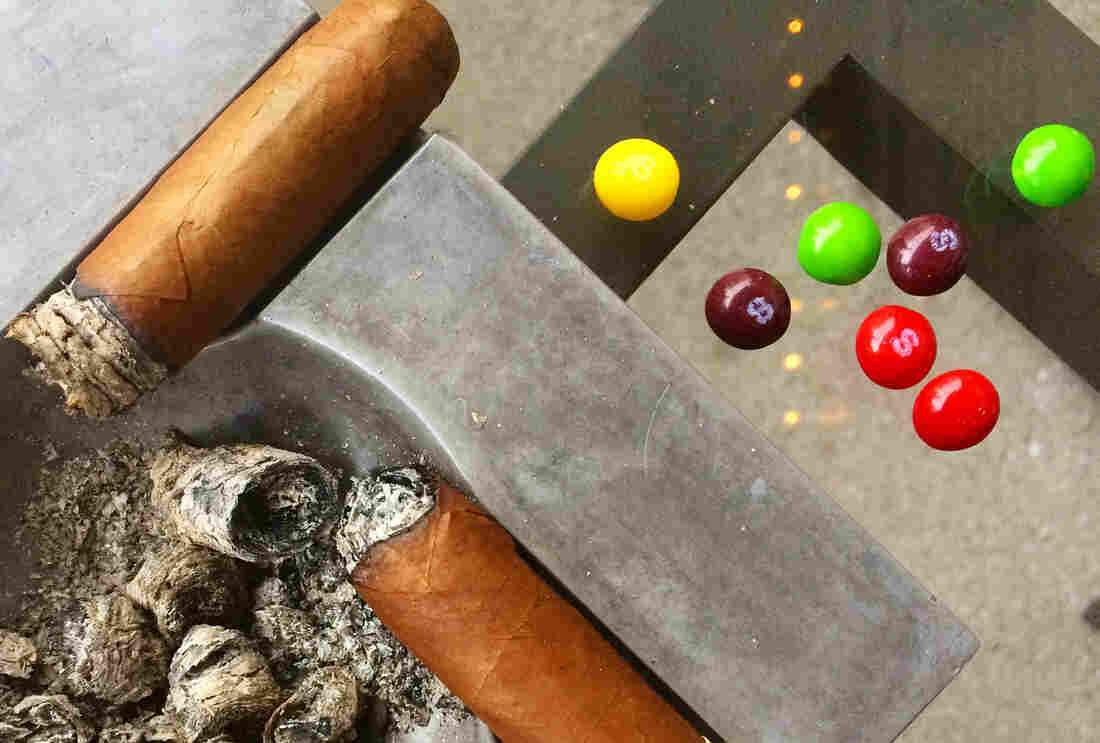 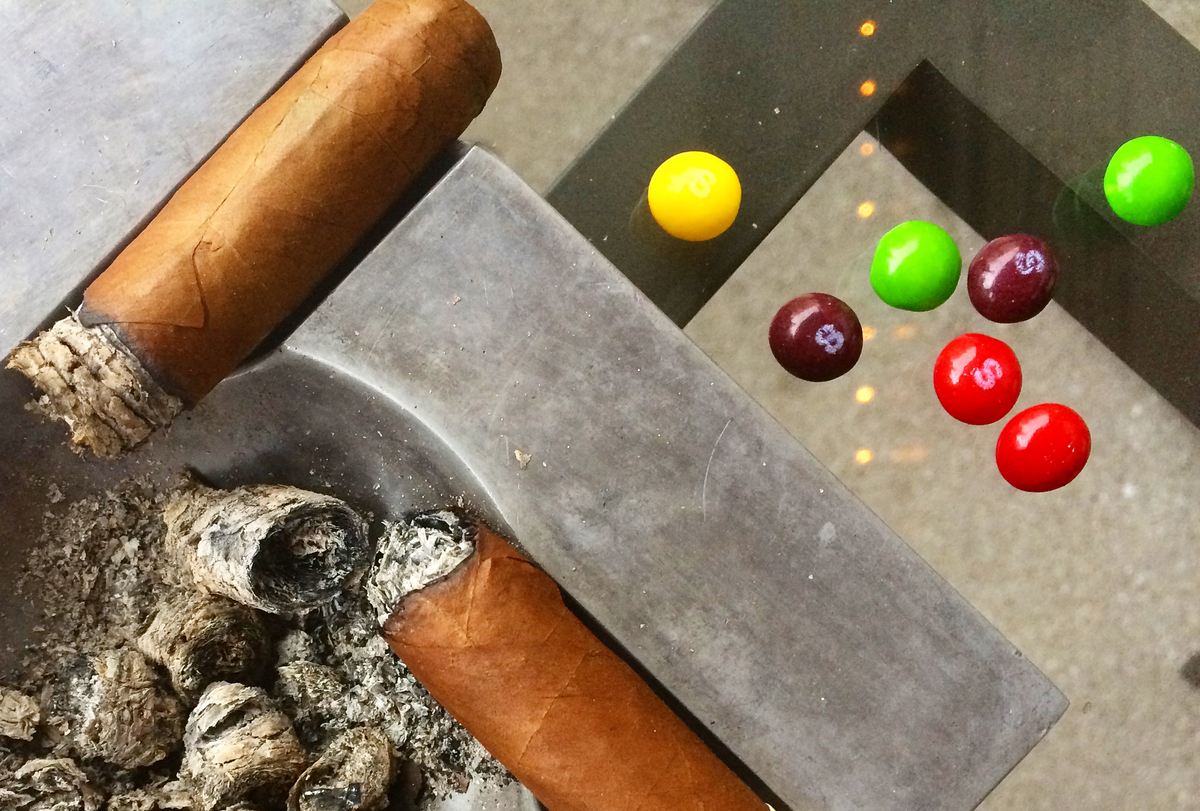 Just a couple of decades ago, there might have been an ashtray on your restaurant table, while bartenders with cigarettes hanging out of their mouths poured your cocktails. However, the rise of smoke-free bars and restaurants across the U.S. means that most diners no longer have the scent or taste of tobacco mingling with their grilled salmon or crème brûlée — and many would say that's a good thing. Besides being unhealthy, smoking also appears to mess with taste perception.

You won't find cigarette smokers at Bourbon Steak, the fine dining restaurant at the Four Seasons Hotel in Washington, D.C. Executive chef Joe Palma says that he wouldn't want diners chain-smoking between courses, possibly affecting the flavors he's painstakingly created in the kitchen. However, he's still a fan of the new cigar pairing program at Bourbon Steak — offered in specially designated smoking areas of the hotel. "I don't mind if a guest wants to end their meal with a cigar and a drink, especially because the pairings are the opposite of what they might expect," Palma says.

Indeed, the guiding principle for Mason Foster, the restaurant's first-ever certified tobacconist on staff, is both simple and, to some, revolutionary: Forget the masculine brown liquors usually associated with stogies.

Both cigars and cigarettes contain nicotine and pose serious health risks — yet cigar specialists are increasingly becoming fixtures in hotels and restaurants around the world with luxury tobacco programs. Jorge Armentero, founder of Tobacconist University in Princeton, N.J., where Foster received his training, is currently developing a "certified cigar sommelier" degree in addition to its other offerings.

"We currently have over 350 certified retail tobacconists and more than 800 apprentices — mostly in the U.S.," says Armentero. "The cigar sommelier program is a little more focused on retail service and cigar pairing, but it is also based on our fundamental tobacconist curriculum." 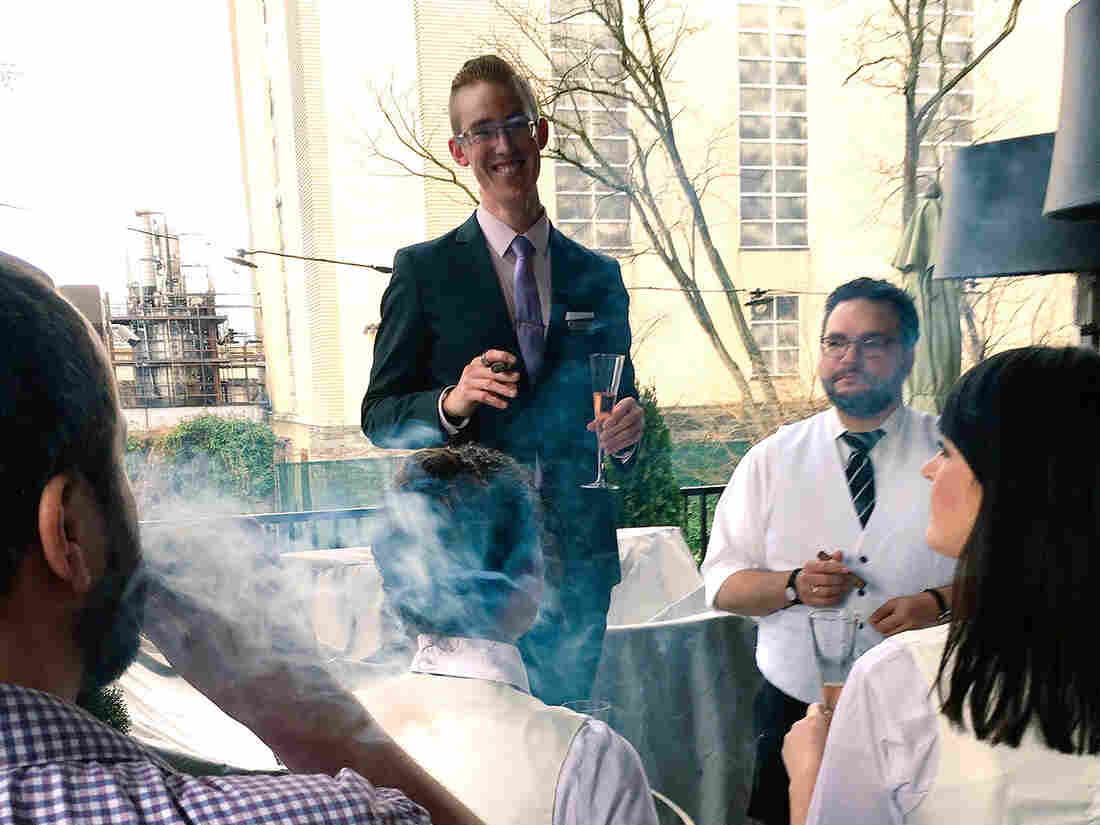 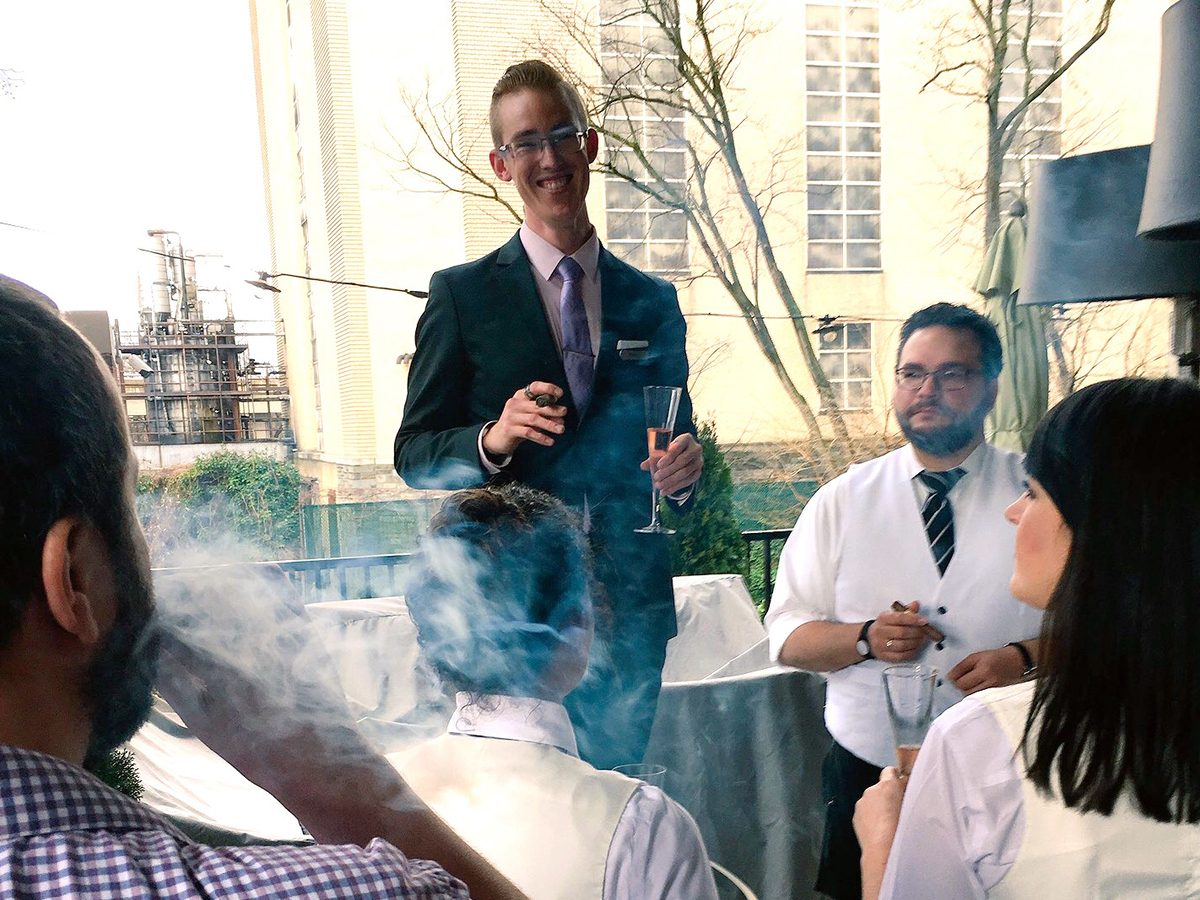 For Giuseppe Ruo, who oversees what is considered one of the world's top cigar programs, at The Wellesley, an upscale hotel in London, cigar pairings are all about personal taste — and his own preference might seem surprising.

"I prefer to drink a strong espresso with a scoop of chocolate ice cream and San Pellegrino sparkling water," he says, "because a good Habanos [Cuban cigar] will marry the power of the coffee and the sweetness of the ice cream, with the water that will cool down your palate from time to time."

Foster says cigars are just as nuanced as wine. "The flavor profile should change as you smoke it. Bourbon and whiskey can overwhelm the palate, rather than provide contrast."

Foster might recommend a bright, crisp sparkling rosé to pair with a milder Dominican tobacco known for its nutty flavor, saying, "When a cigar has those rich pistachio notes, I want something with a little bit of sweetness and effervescence to bring out the creaminess of the tobacco."

You'll hear these kinds of descriptors — creamy, fruity, chocolaty, leathery — frequently bandied about by cigar aficionados in the same way that such adjectives are used to characterize wine and tea, says Foster, because tobacco is, after all, an agricultural product in its own right. Just like tomatoes or apples, tobacco companies develop proprietary strains, sometimes crossing carefully preserved heirloom seeds with newer varietals to create exclusive hybrids.

Growers in cigar strongholds like Cuba, Nicaragua and the Dominican Republic also seek to create different flavor profiles through two or even three fermentation processes, designed to remove ammonia from the leaves and yielding tastes that range from bitter to sweet, while bringing out elements of everything from cinnamon to pine trees to coffee.

While cigarettes are also made from tobacco, the main difference is that cigarette tobacco, composed of chopped leaves, stems and scraps, can also contain sugar, menthol and other additives, which is then wrapped in paper. A filter is added to minimize the amount of smoke inhaled. Premium cigars are made of 100 percent tobacco, including a single large leaf which serves as the wrapper; unlike cigarettes, cigars are not meant to be inhaled. 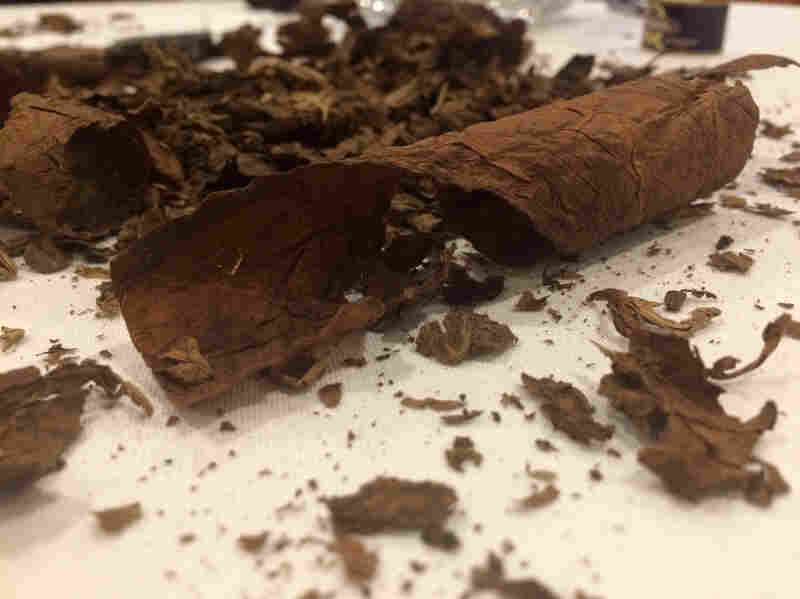 Different types of tobacco come together inside the wrapper to create unique flavor profiles. Kristen Hartke for NPR hide caption 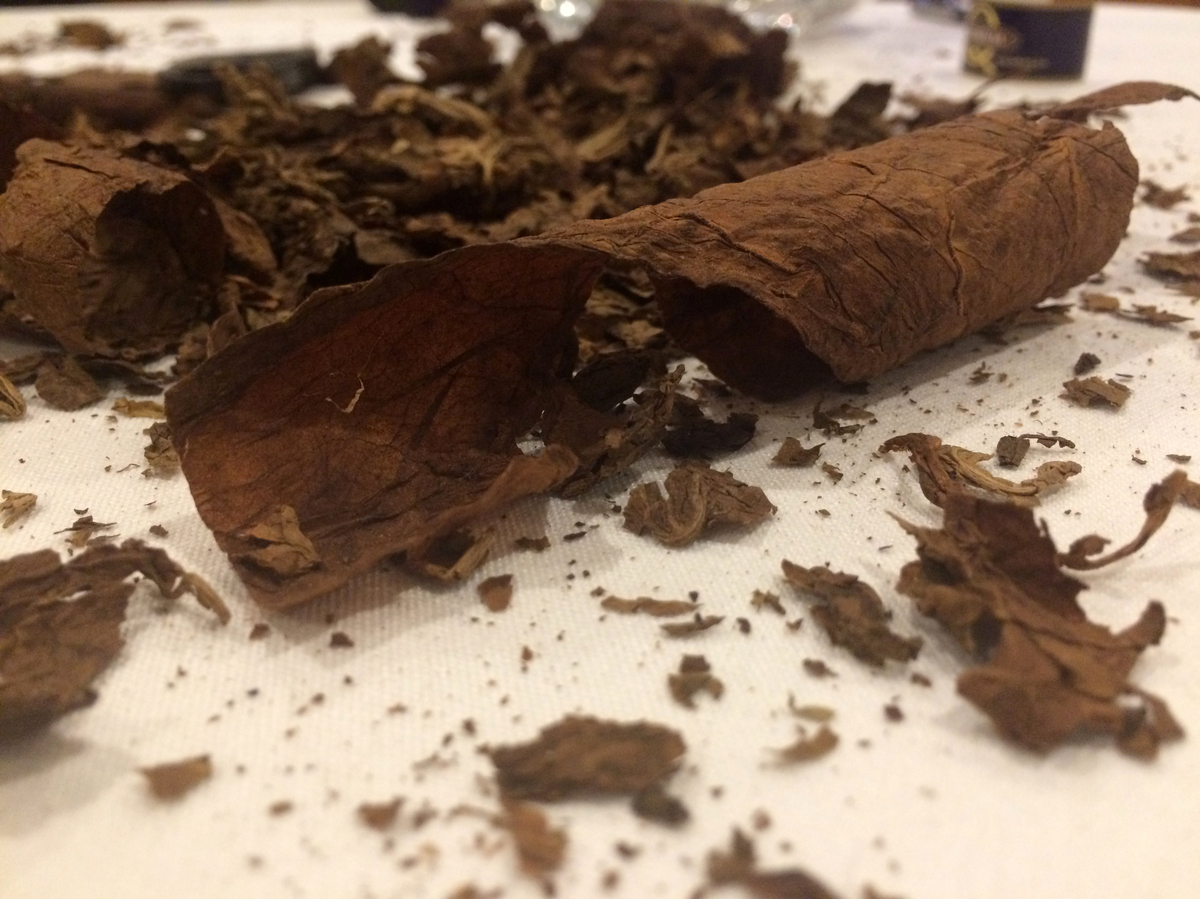 Different types of tobacco come together inside the wrapper to create unique flavor profiles.

Because a high pH level makes cigars fairly alkaline, Foster relies on acidity to help balance the flavors, starting with consuming a tart candy, like Skittles, to neutralize the palate. Having only begun smoking cigars less than two years ago, the 25-year-old cigar sommelier has gone full-bore into his new passion, smoking a few cigars each day and going through some 2 pounds of Skittles or Starburst candies a week.

"I know that's not a good idea for my teeth," he admits, "but I find that the acidity is very helpful since I'm frequently tasting different cigars to determine the beverage pairings."

"Mason has an innovative approach to pairings," says David Fascitelli, general manager at Bourbon Steak. "He goes beyond standard whiskey-and-cigar combinations by applying an almost scientific methodology. He looks at each cigar's pH level and alkalinity to consider its compatibility with everything from the sugars and tannins of wines to the sour components of cocktails."

Remembering that cigars are hot (they are, after all, actually on fire when being smoked), Foster steers away from higher-proof alcohol, looking for cocktails designed to cool the palate, like vodka laced with bitter orange Cointreau, fresh ginger and basil, a pairing that emphasizes the "chocolate-covered raisin and cedar" flavors of a blend of tobaccos grown in Nicaragua, Ecuador and Mexico.

The pairing, according to cigar sommelier Ruo, can be critical. "It's important to be cautious in selecting a cigar for a novice smoker, as the wrong suggestion could very well make that person never want to touch a cigar again," he says. Ruo also looks for cocktail pairings that are light and refreshing, such as gin or vodka with tonic, a Cuba Libre or classic mojito, saying, "They have the right amount of alcohol and sugar to support your cigar."

"The end goal is to match that alkaline cigar with some kind of acidity," says Foster. For novices, he recommends starting with a mild cigar and any bottle of Champagne, or even nonalcoholic drinks like an Arnold Palmer, with its tart and tannic flavor profile, or a refreshing mint tea.

"There's a certain amount of trial and error," he says. Sometimes an experiment can lead to an unexpected success, like the Partagas Ramon y Ramon, a medium-bodied cigar with woody, herbaceous qualities that Foster decided to pair with a glass of absinthe, a botanical liqueur known for its strong anise flavor.

"Honestly, I wasn't sure it would work," says Foster. "The absinthe I was drinking was made by Leopold Bros., which is a little more citrusy and less dark than some other absinthes on the market. The combination worked, though. When I sipped the absinthe after that initial mouthful of smoke, the lemon peel was really amplified."

No matter what, don't be lured to dip the head of the cigar into a spirit like rum or whiskey, which some people think enhances the flavor. "It doesn't work," says Foster. "You'll just end up with a wet cigar."