Accessibility links
On A Hot Day, Indians Love To Sip A Spicy Soda That's A Bit Funky, Too : The Salt Masala soda comes in many flavors. It's usually sold by street vendors and small shop owners. Indians love this drink so much, that big soda companies are now selling it, too. 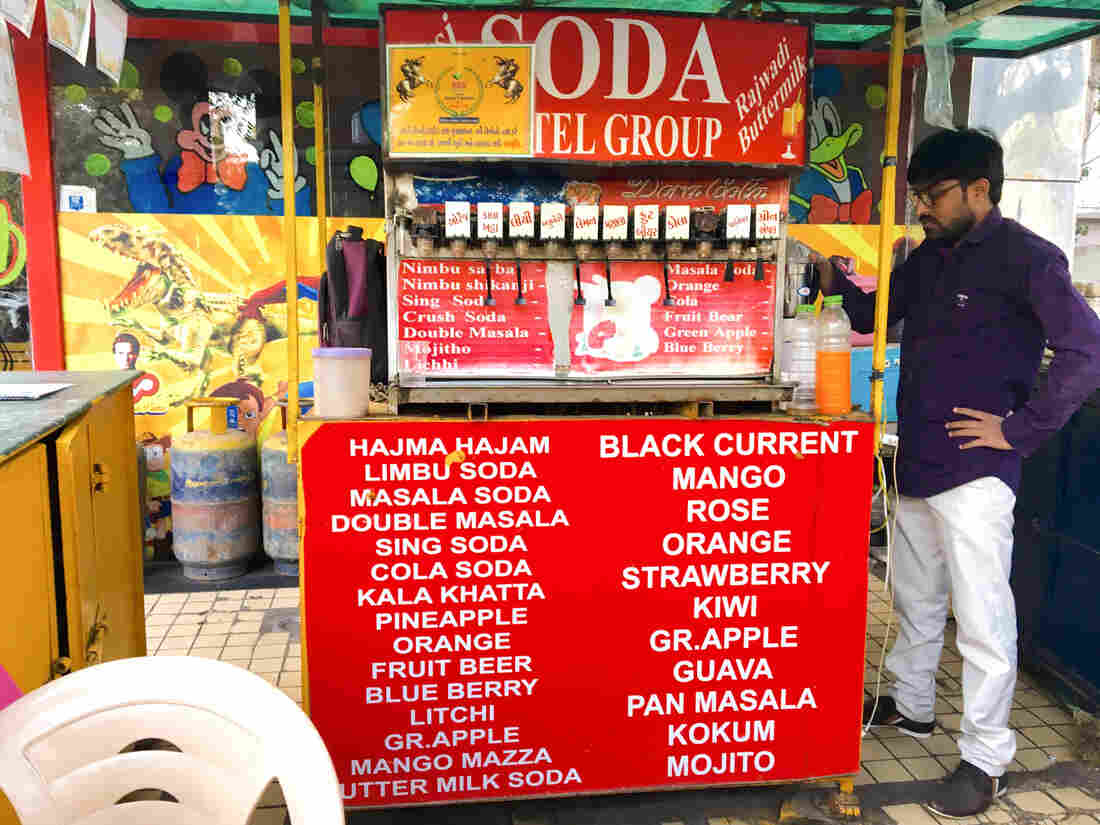 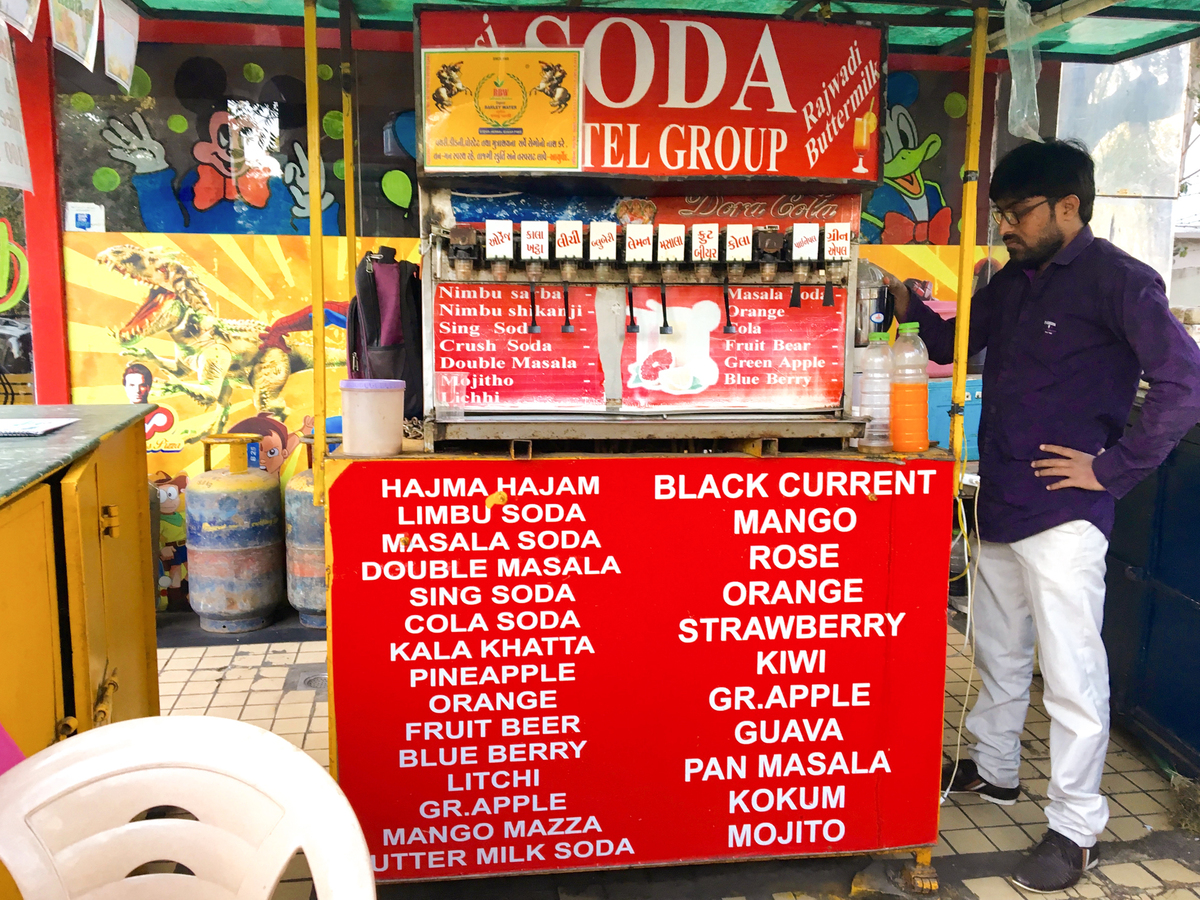 A typical masala soda shop in Mumbai. Flavors sold here range from traditional Indian ones with mango, pineapple and lemon, to more westernized flavors, like strawberry, kiwi and mojito.

It was a warm January day in Vadodara, in western India, when my aunt, Apeksha Kaki, announced that we were going to a soda shop. This was my first time visiting extended family in India, and I was eager to try local foods and drinks. So, I was a bit disappointed at the mention of soda.

It was around 9 p.m. when we rolled up to this shop on the outskirts of the city. A crowd of about 30 people had gathered at the small shop, which consisted of two soda dispensers and several employees. On the counter was a wooden box sectioned into a few dozen compartments, each with a plastic cup of soda - sort of an assembly line, allowing the staff to handle many orders at once. Several plastic bottles sat on one end of the counter. Repurposed into squeeze bottles, some were filled with fresh lemon juice and plain or flavored syrups. There were canisters with spices and rock salt. 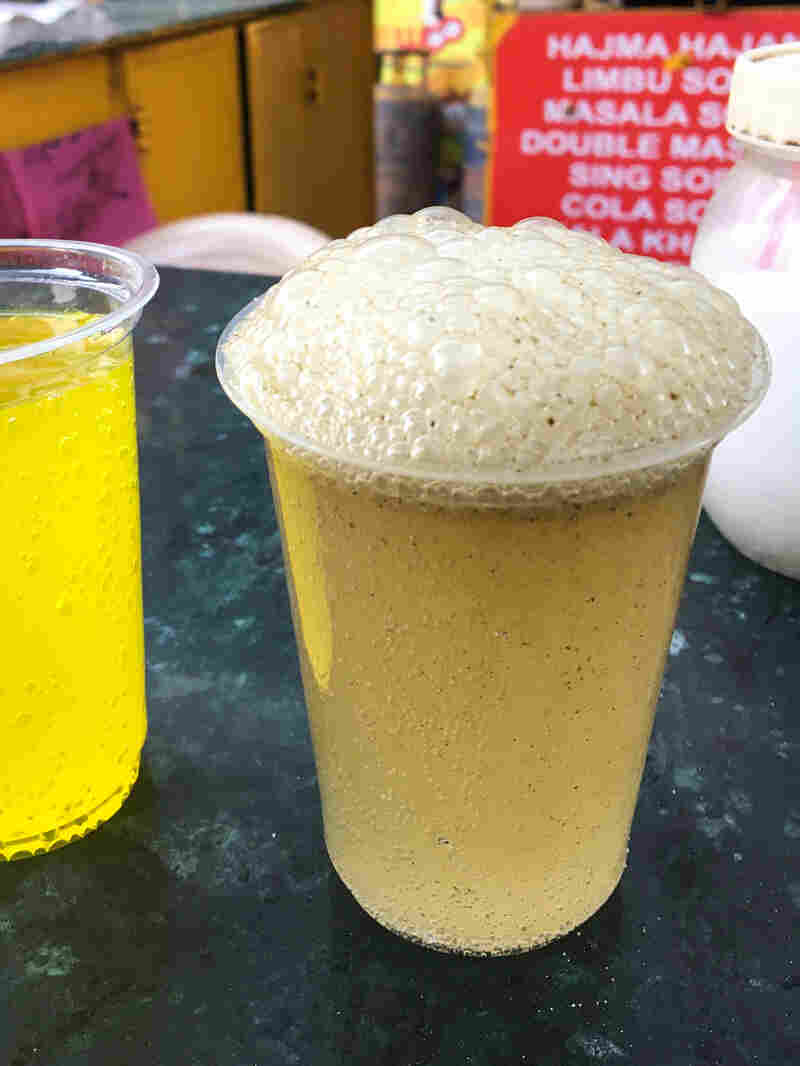 A glass of nimbu masala soda, made with fresh lemon or lime juice and spices. Leena Trivedi-Grenier for NPR hide caption 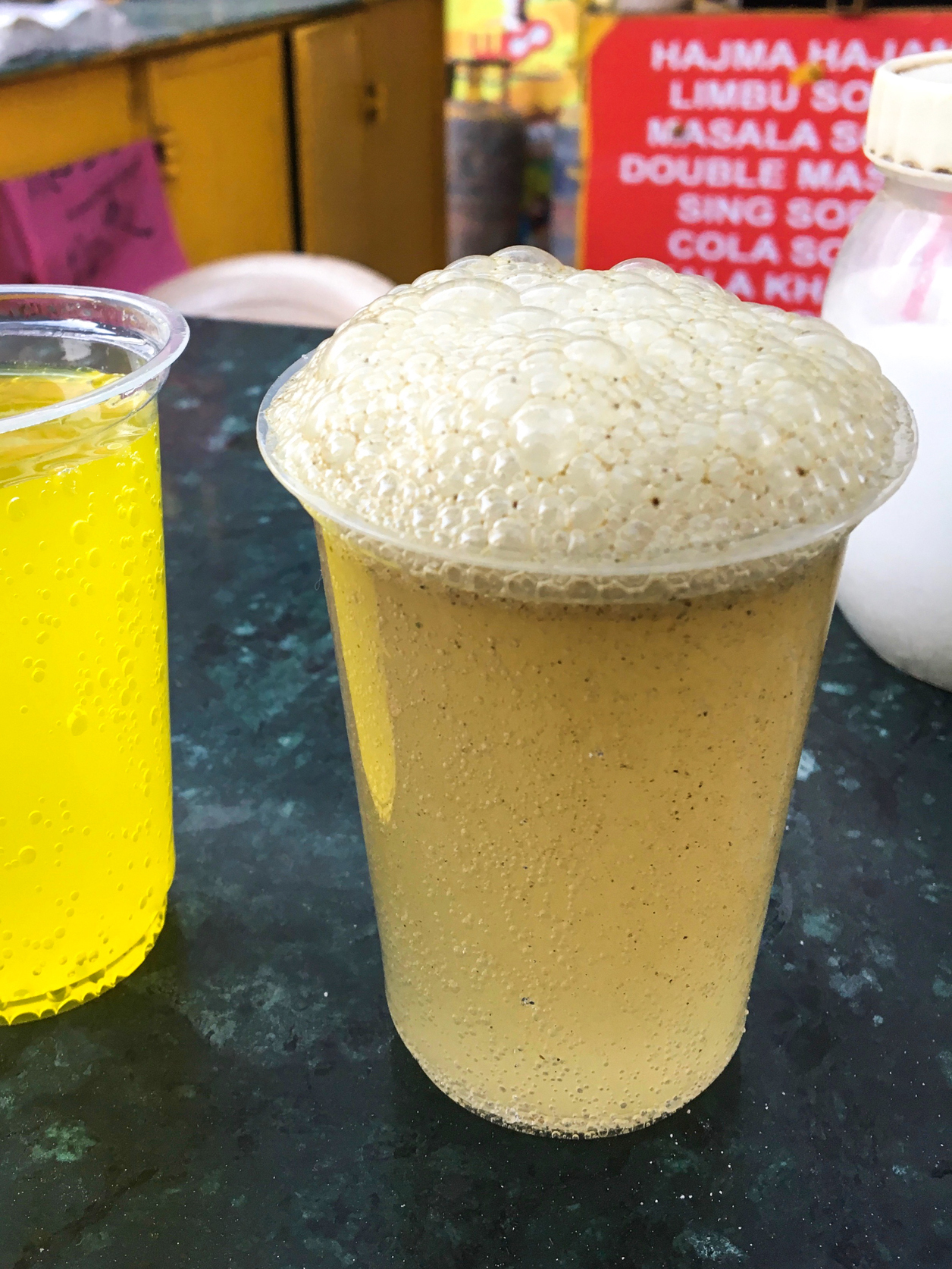 A glass of nimbu masala soda, made with fresh lemon or lime juice and spices.

My aunt suggested I try a nimbu soda. The first sip flooded my mouth with fresh lemon and spices that I'd never expected in a cup of soda: chili pepper, cumin, ginger, black salt. Sweet, salty, savory and a bit funky all at once. This was not just soda. This was masala soda, the single most flavorful sip of my entire trip, and I needed more.

"Masala soda is a punchy, flavored soda drink," Denise D'Silva Sankhe, a Mumbai-based food writer told me recently. "It's typically a street style drink that you will find vendors serving up in the hot Indian summer." While it can be found all over the country, most people agree that masala soda originated in North India.

Masala means spice mix, so it's literally soda with spices. The flavor I tried is the aerated cousin of nimbu pani, a sweet and salty lemonade or limeade that many Indians drink to stay hydrated during hot summers. But there's a myriad other flavors. The masala could contain as little as white salt, black salt and cumin, or an endless list of spices including amchoor (dried, powdered sour mango), black pepper, ginger, chili pepper (dried or fresh), turmeric, asafoetida, mint, even anar dana (dried pomegranate seed powder). A popular flavor in Mumbai and the state of Gujarat is jal jeera, a spice mix with roasted cumin that's otherwise used for another traditional summer drink of the same name — jal jeera literally translates to cumin water.

The other most important ingredient of this masala is the kala namak, or black salt. It's a rock salt containing sulfur, which lends a pungent, almost eggy smell to the drink. Carbonated water gives the drink effervescence, which can be further enhanced with a simple syrup and nimbu (meaning lemon or lime) juice or a fruit flavored drink called sherbet. Occasionally, it's served with commercial sodas, like Thums Up (an Indian cola) or Sprite. 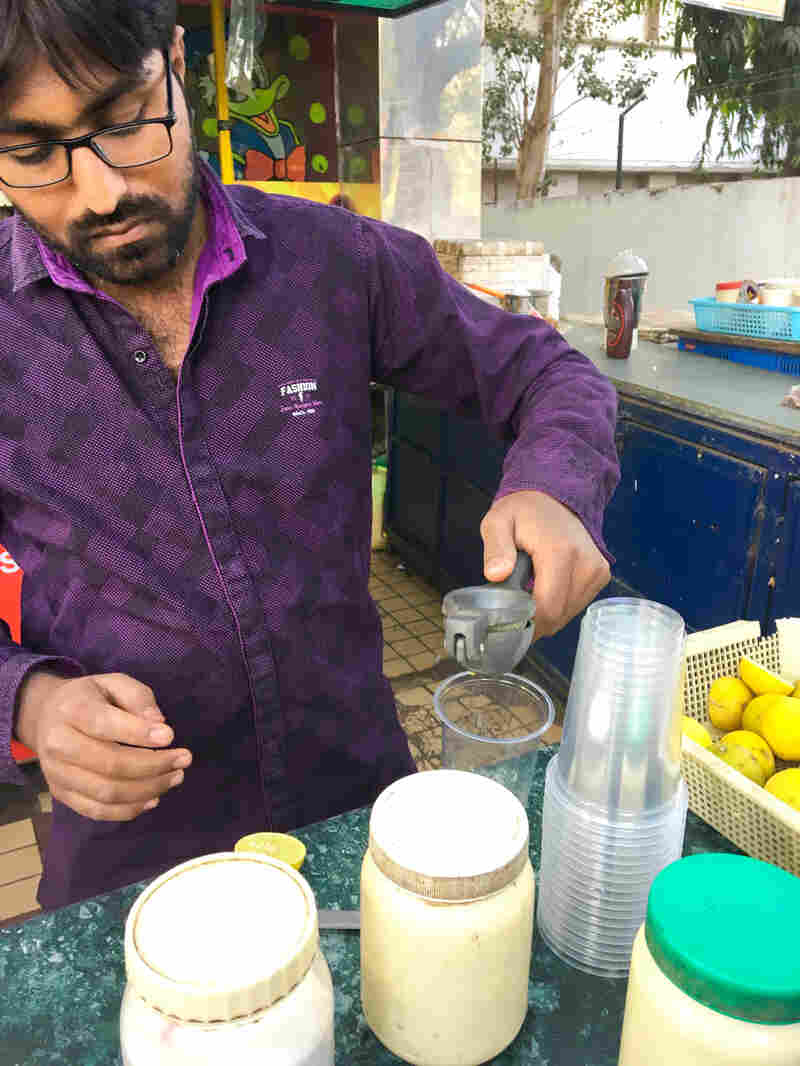 A soda vendor in Mumbai squeezes fresh lemons for a nimbu soda. The plastic jars in front of him contain spice mixes for different flavors. Leena Trivedi-Grenier for NPR hide caption 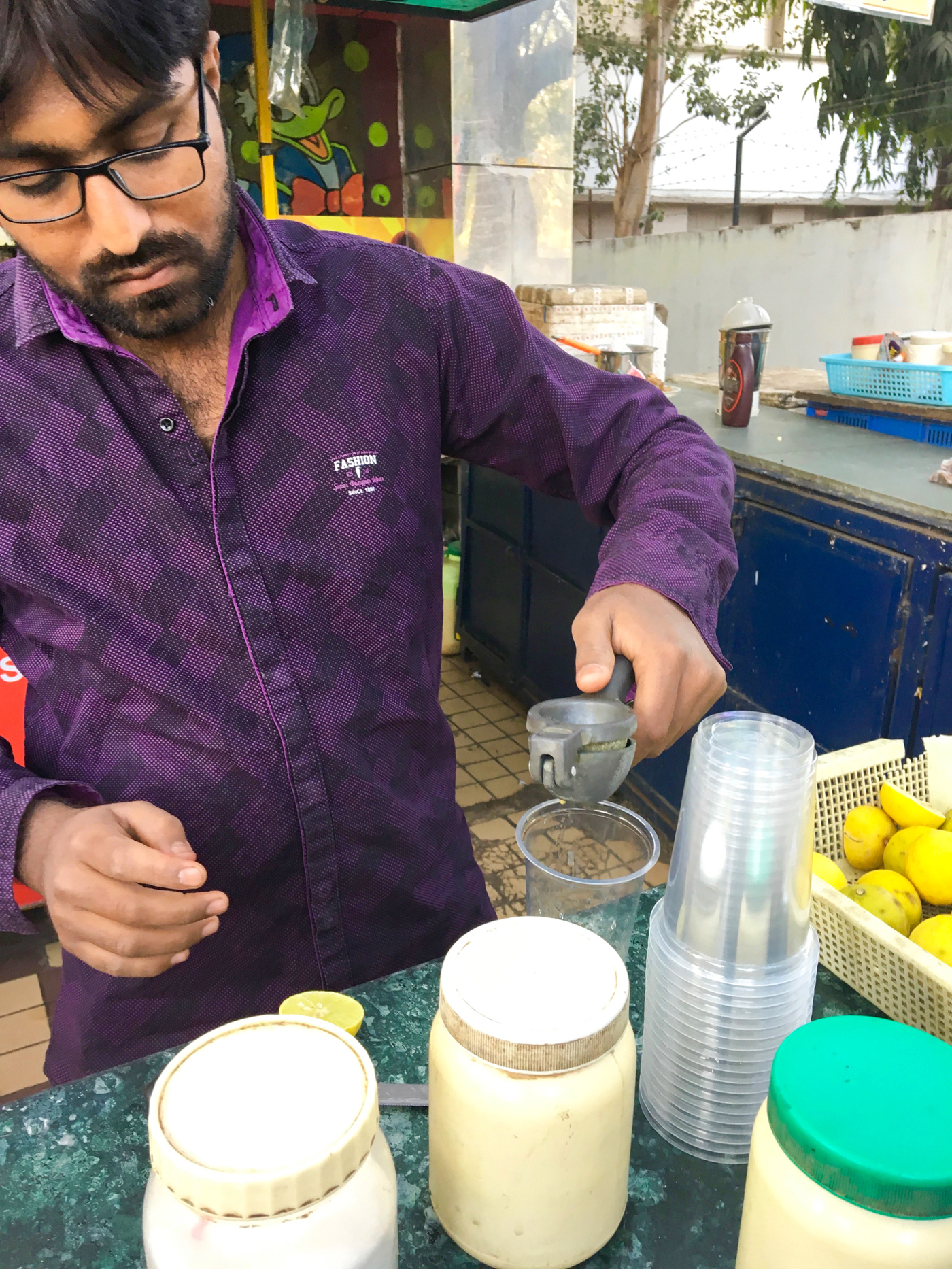 A soda vendor in Mumbai squeezes fresh lemons for a nimbu soda. The plastic jars in front of him contain spice mixes for different flavors.

And ayurvedic traditions claim the spices in the sodas come with some health benefits. Cumin, for example, is said to help with digestion. Black salt is also thought to help. Whether real or not, Indians I interviewed seem to believe in masala soda's therapeutic powers. Apeksha Kaki told me that it's a great way to settle an uneasy stomach, especially after a large meal. Chicago-based food writer Anupy Singla agreed. She was born in Punjab and grew up in Philadelphia. "Masala soda is something I grew up drinking if I had a stomach ache," she said. "We'd take some club soda, black pepper, salt and kala namak and make our little soda for ourselves. That's how we did it in our house."

Despite its popularity, the number of independent soda shops and street vendors selling masala soda are declining. Some, like D'Silva-Sankhe, believe that it's because of "the arrival of major cola players in the Indian market." She notes that advertising from big soda companies have made their drinks more popular and trendy among India's growing middle class. Customers with disposable income rather drink fizzy drinks from big brands like Coke and Pepsi, than stand in line at a small soda shop. Jonty Rajagopalan, a Hyderabad-based Indian food historian, points out that sanitation is another reason. She prefers street vendors to bottled drinks, but "some stalls look so dirty, drinking from there would probably seem unsafe," she said in an email.

However, Indians love their masala sodas so much, that even global and regional companies are now bottling them. In 2012, Coca Cola relaunched a bottled masala cola called RimZim that they bought in 1994, and PepsiCo India released 7up Nimbooz Masala Soda. And Regional brands (which make up 15% of the market place) sell flavors like JalJeera (Jayanti) and Jeera (Xalta).

But these commercial sodas lack customization and the atmosphere of a soda shop, which is a big part of the masala soda experience. As I learned in Vadodara, these shops are also social hubs, especially in dry states like Gujarat that lack bars. It's a meeting place where people gather to sip masala soda and talk with their friends.

I tasted my favorite masala soda from one such street vendor in Mumbai. It was made from kokum (an Indian mangosteen), which is not available commercially. For 20 rupees (31 cents), I sipped my sweet, sour and mildly savory soda as I watched small groups of friends come and go, drinking their sodas and chatting. The taste and memory have lingered in my mind for months after the trip.

Leena Trivedi-Grenier is a San Francisco-based food and culture writer. Her work can be found here.