Accessibility links
Not Just For Foreign Foods: Fair-Trade Label Comes To U.S. Farms : The Salt Since 1998, Fair Trade USA has been certifying farms overseas that met its standards for workers and the environment. Now, the group is looking closer to home, starting with an Arizona organic farm. 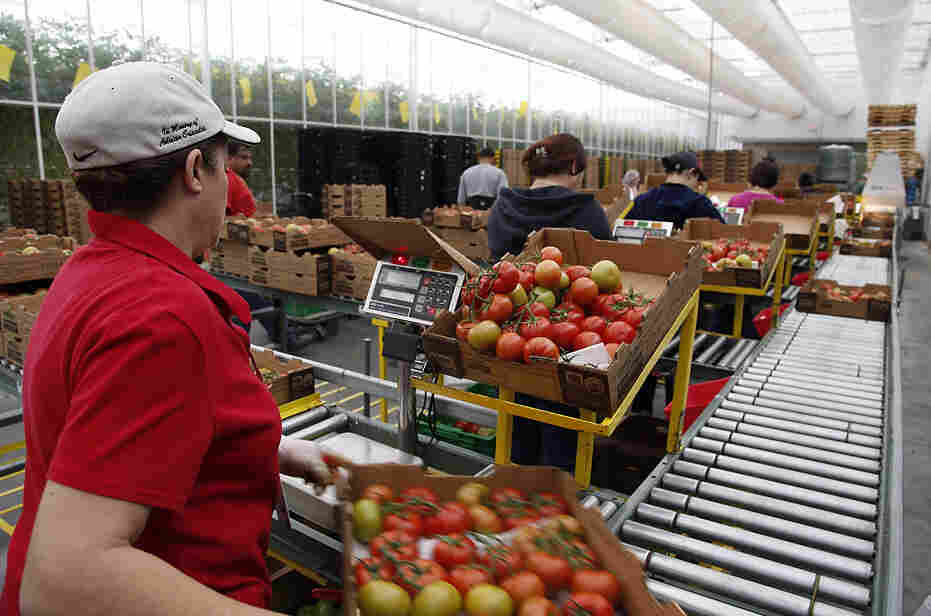 The family-owned Wholesum Harvest had to meet a checklist of more than 300 standards — including many worker protections — to become the first American farm certified by Fair Trade USA. Workers at its Nogales, Ariz., tomato farm recently received a check for more than $30,000 — workers will collectively decide how to spend it. Courtesy of Wholesum Harvest hide caption 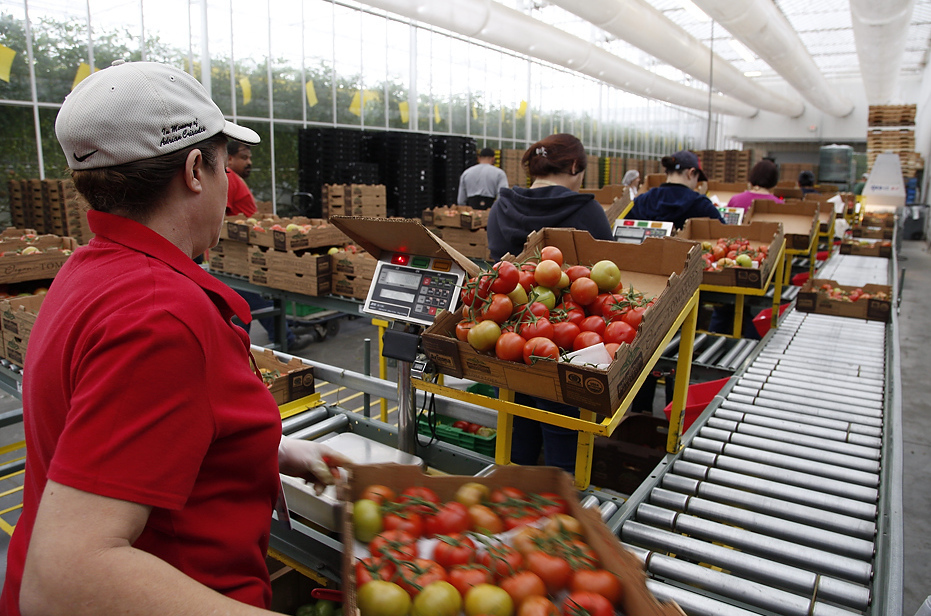 The family-owned Wholesum Harvest had to meet a checklist of more than 300 standards — including many worker protections — to become the first American farm certified by Fair Trade USA. Workers at its Nogales, Ariz., tomato farm recently received a check for more than $30,000 — workers will collectively decide how to spend it.

Workers at a tomato farm in Nogales, Ariz., got a check this month for more than $30,000. And they expect more money to come.

The approximately 130 workers of Wholesum Harvest are still deciding how to spend the money, but they say their initial priorities include subsidizing transportation, recreation areas and medical insurance.

Located just north of the Mexican border, the family-owned Wholesum Harvest is the first farm in the United States to receive certification from Fair Trade USA, which means it has demonstrated compliance with a checklist of more than 300 standards detailing working conditions and environmental protection.

Every fair-trade purchase involves a small financial premium paid by retailers and, ultimately, consumers. As the funds from these premiums accumulate, workers receive distribution checks and organize into committees to decide how best to spend the money.

Consumers in the United States have likely seen fair-trade labels on coffee beans or cocoa grown by farmers in countries like Ethiopia or Guatemala. But fair-trade certification now covers everything from clothing to seafood, and Fair Trade USA wants to expand its labels to cover domestic operations as well.

When the organization got started, "the feeling was that workers and farmers in the States didn't need it," says Paul Rice, president of Fair Trade USA. But that sentiment is changing.

Officials at Fair Trade USA expect another dozen American farms to become certified in the next year. And over the past few years, other nonprofits, such as the Agricultural Justice Project and the Equitable Food Initiative, have launched their own labeling efforts.

When Fair Trade USA opened its doors in 1998, the nonprofit's focus was improving pay and working conditions for farmers in countries with the fewest legal protections. By providing a standard label that indicated adherence to a clear set of ethical and environmental standards, the organization aimed to help retailers and consumers decide which products to stock or purchase. (Fair Trade USA split from the umbrella organization Fairtrade International at the end of 2011, citing the desire to certify a broader range of producers and companies as Fair Trade.)

But while the United States has stronger labor laws and environmental safeguards than some countries, conditions for many agricultural workers are still far below Fair Trade USA's standards.

Wholesum, which grows organic cucumbers, squash, eggplant and bell peppers in addition to tomatoes, was already fair-trade certified at its farm in Sonora, Mexico, so it was a natural step to apply for the label at its U.S. operation. It became certified in October, roughly four months after it began the lengthy process of audits and inspections. 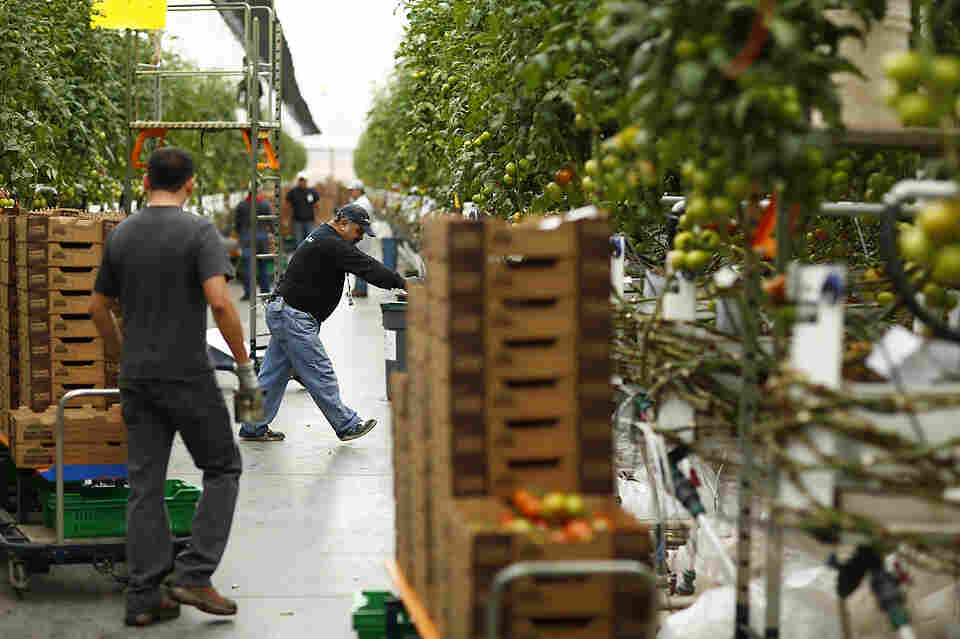 Wholesum Harvest made many changes as part of its fair-trade certification, including switching to carbon-neutral pallets and working to protect an endangered species of cactus. Courtesy of Wholesum Harvest hide caption 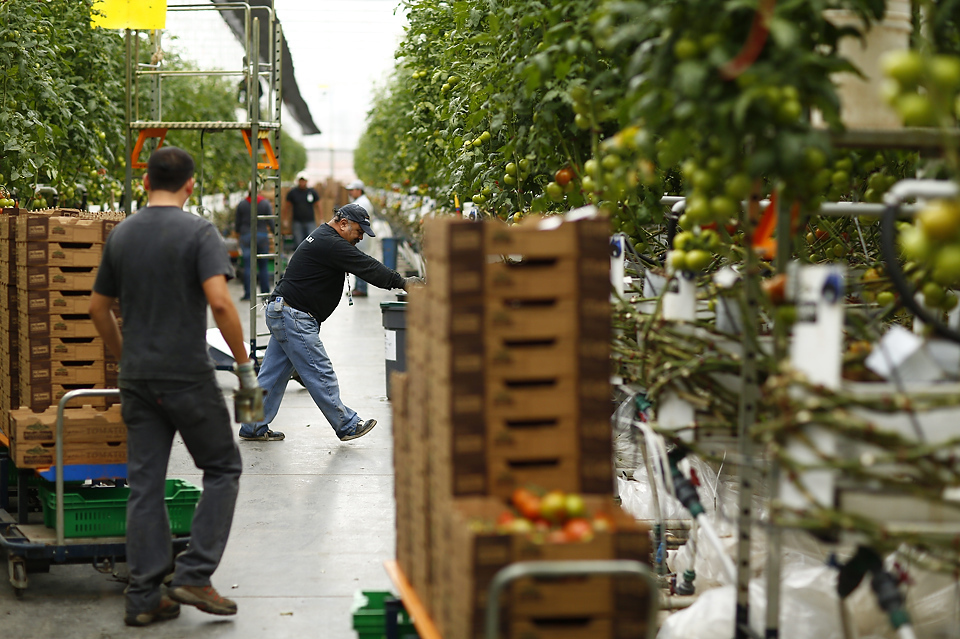 Wholesum Harvest made many changes as part of its fair-trade certification, including switching to carbon-neutral pallets and working to protect an endangered species of cactus.

"Fair trade is meant to do what laws have been unable to do," says Hannah La Luzerne, Wholesum's sustainability manager. The farm was voluntarily meeting many of the fair-trade standards, but she saw the label as a way to communicate the company's values with greater credibility.

"People have always been central to our mission, but this is a way to show we're not just talking about it – the third-party audit is a kind of guarantee to our customers," she says.

Still, what exactly the label guarantees is not always clear to consumers.

"There's still a big lack of understanding of what fair trade is," says Ricardo Crisantes, a member of the family that has owned and operated Wholesum for three generations. "Most people associate it with something good, but they couldn't say exactly what that good is."

The certification process prompted many changes at Wholesum. The staff has established a permanent nondevelopment zone to protect an endangered species of cactus; switched to carbon-neutral pallets; spent dozens of hours interviewing workers about their needs and educating them about their rights; and invested in a record-keeping system to document their compliance with fair-trade standards.

The certification has given the workers additional responsibilities as well. Important decisions are voted on by the entire community of workers, and they have elected a committee to research and analyze projects they might pay for with their fair-trade premiums.

The workers at Wholesum's Sonora location, for example, have purchased school buses to help their children get to school; built a soccer field and a tortilla factory that sells its tortillas back to the community at cost; and subsidized medical vouchers for dental and vision care. After hurricanes devastated parts of central Mexico a few years ago, the workers voted to send a sizable check to the Red Cross to help recovery in the region.

Many of the workers on fair-trade committees end up learning skills in accounting, project management and community organizing. "You might have a guy who makes $18,000 a year managing a budget of $200,000," Crisantes says.

Hazzany Ibarra has worked as a tomato packer at Wholesum's Arizona warehouse for five years and is now vice president of its workers' committee. He spends about five hours a week in meetings, conversations or research related to fair trade.

Now that the workers have received their first check, "I'm excited but also nervous," he says. "We know we have to do things, but we don't always know how to do them yet."

But he says he wants consumers considering whether to buy a fair-trade product to understand that "it really does mean something."

"It's not a lie," he says. "All of it's true – fair-trade premiums pay for projects that really matter."

Nick Romeo is a journalist based in Palo Alto, Calif. His work has appeared in publications including The New Yorker, The Washington Post and National Geographic.